Temples hold important cultural and historical significance in China. Whether they’re Buddhist, Taoist, Confucian, or something of the like, there are myriad temples all throughout the country. In the capital city of Beijing alone, there are hundreds upon hundreds of temples.

Many Chinese temples are built with the concepts of harmony and symmetry in mind. While complexes can have buildings scattered around the grounds, there is almost always a central axis, a north-south pathway, on which the more important buildings lie. The buildings, statues, and other decor on either side of the central axis typically match the opposite side in perfect symmetry.

Visiting the temples in Beijing can provide a lens not only into the different religions and philosophies that people there follow but also into the different Chinese architecture styles, which reflect the dynasties in which they were built. Temple hopping can be draining, however, so spend your time wisely by checking out Beijing’s seven best. 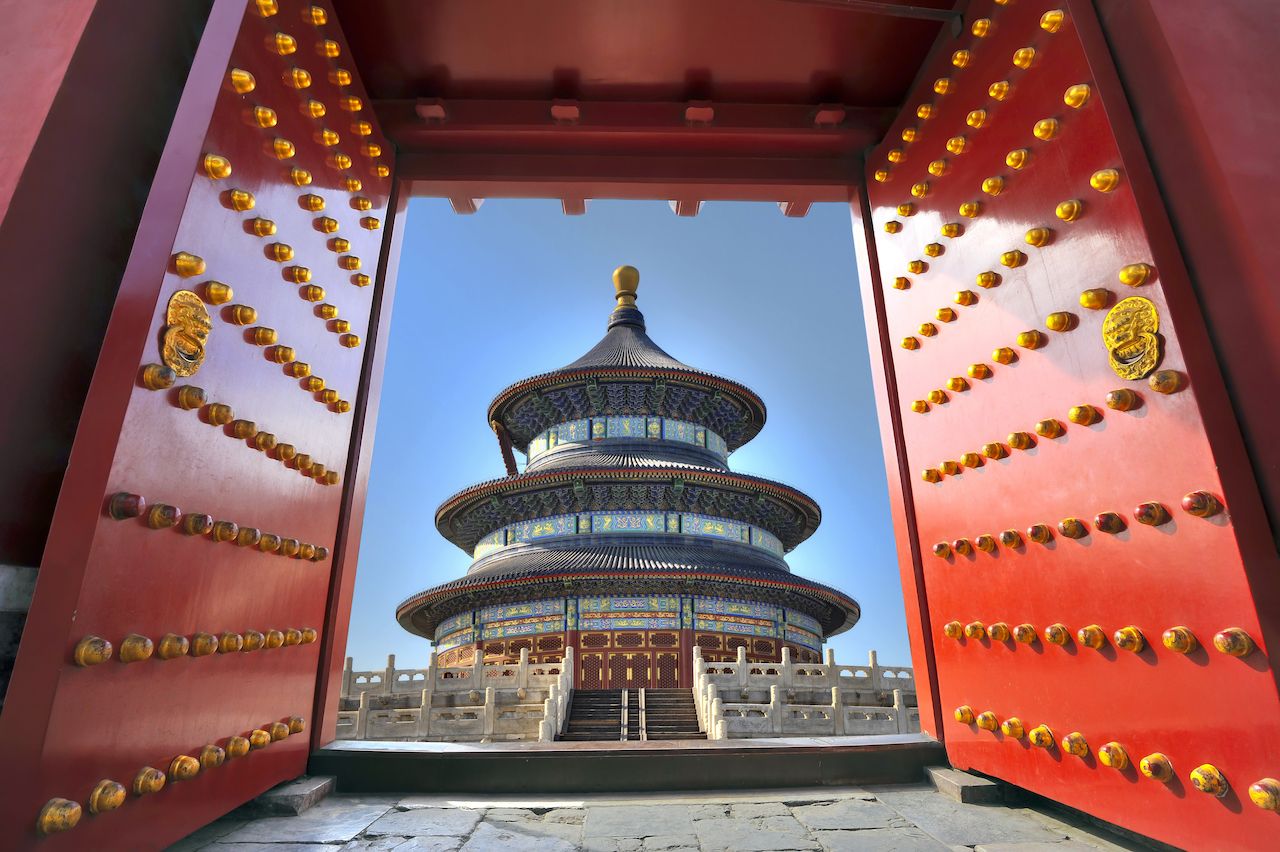 Originally named the Altar of Heaven and Earth, the Temple of Heaven is the world’s largest existing building complex for offering sacrifices to heaven. While it was later renamed in 1534, a few years after new building additions, the original version of the complex was completed in 1420 along with the Forbidden City. The UNESCO World Heritage site was built as a place of worship where emperors, acting as a sort of intermediary between humans and heaven, would pay their respects to heaven and pray for good harvests. The complex’s layout was designed with this sacred purpose in mind, as well as on ancient beliefs that tied “numbers and spatial organization to beliefs about heaven and its relationship to people on Earth.”

There are 92 buildings with 600 rooms total, but if you’re pressed for time, there are three main areas you should focus on. All three are on the central axis, making it easy to hit them in one go. The first place you should visit is on the south end, the Circular Mound Altar, which was built specifically for sacrifices to heaven. The open-air altar is made up of three layers of marble with a round slate, named the Heart of Heaven, as the focal point. It’s also where emperors would pray for good weather and where winter solstice ceremonies were held.

The next place is the Imperial Vault of Heaven, a circular building where stone tablets used in harvest prayer and worship ceremonies are housed. The final place is the magnificent Hall of Prayer for Good Harvests, which is the complex’s main building and the one that most people will recognize on sight. This is where emperors would pray for good harvests; the 28 columns inside represent the four seasons, 12 months of the year, and 12 Chinese zodiac hours. Visiting in the morning provides the best chance at beating the crowds, and you’ll also get to see locals performing various exercises like tai chi and kung fu in the park. 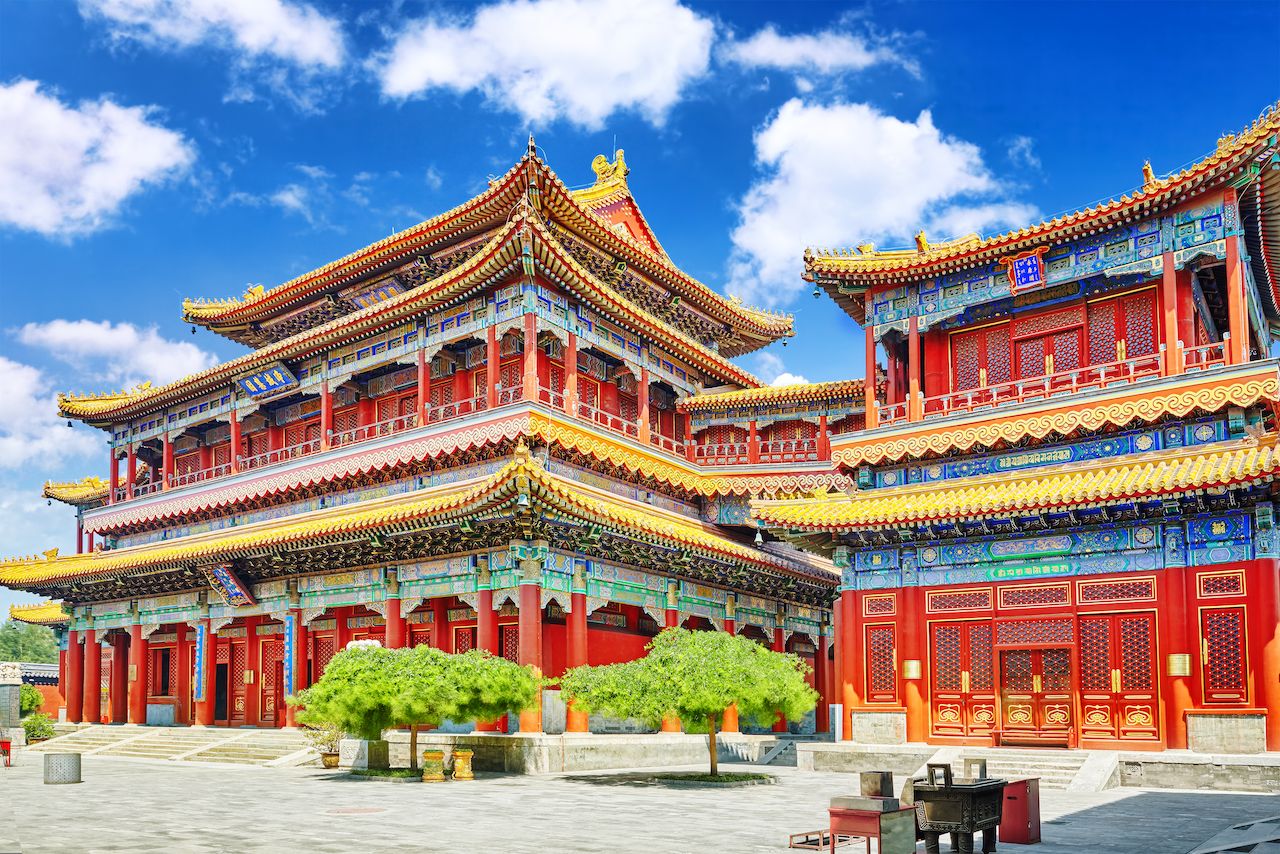 A temple with a long list of nicknames — Yonghe Temple, Yonghe Lamasery, Yonghe Lama Temple, Harmony and Peace Palace Lamasery — Lama Temple is one of the most popular temples in Beijing, right up there with the Temple of Heaven. It was constructed in the late 17th century as the royal court for then-prince Yongzheng. When Yongzheng became emperor in 1722, the site gained imperial status, was renamed, and became a palace that he could stay in when he wanted to get away from the Forbidden City. The site went from palace to temple once the emperor passed and a new dynasty began, though the Chinese Civil War forced a 32-year closure until its reopening in 1981.

The five main buildings, on the central axis, are the Gate Hall of Harmony and Peace, the main entrance to the temple; the Hall of Harmony and Peace, the main hall with statues of the Buddhas of the Three Ages (present, past, and future) and statues of 18 arhats (people who have achieved nirvana), which represent protection; the Hall of Everlasting Protection, a series of connected buildings where Yongzheng lived when he was a prince and later used as a space for prayer; the Hall of the Wheel of Law, a space to read scripture and for ceremonies, and where 500 arhat statues made of different metals can be seen; and the Pavilion of Ten Thousand Happiness, with a wooden Maitreya Buddha statue so tall that it achieved a Guinness World Record in 1993. 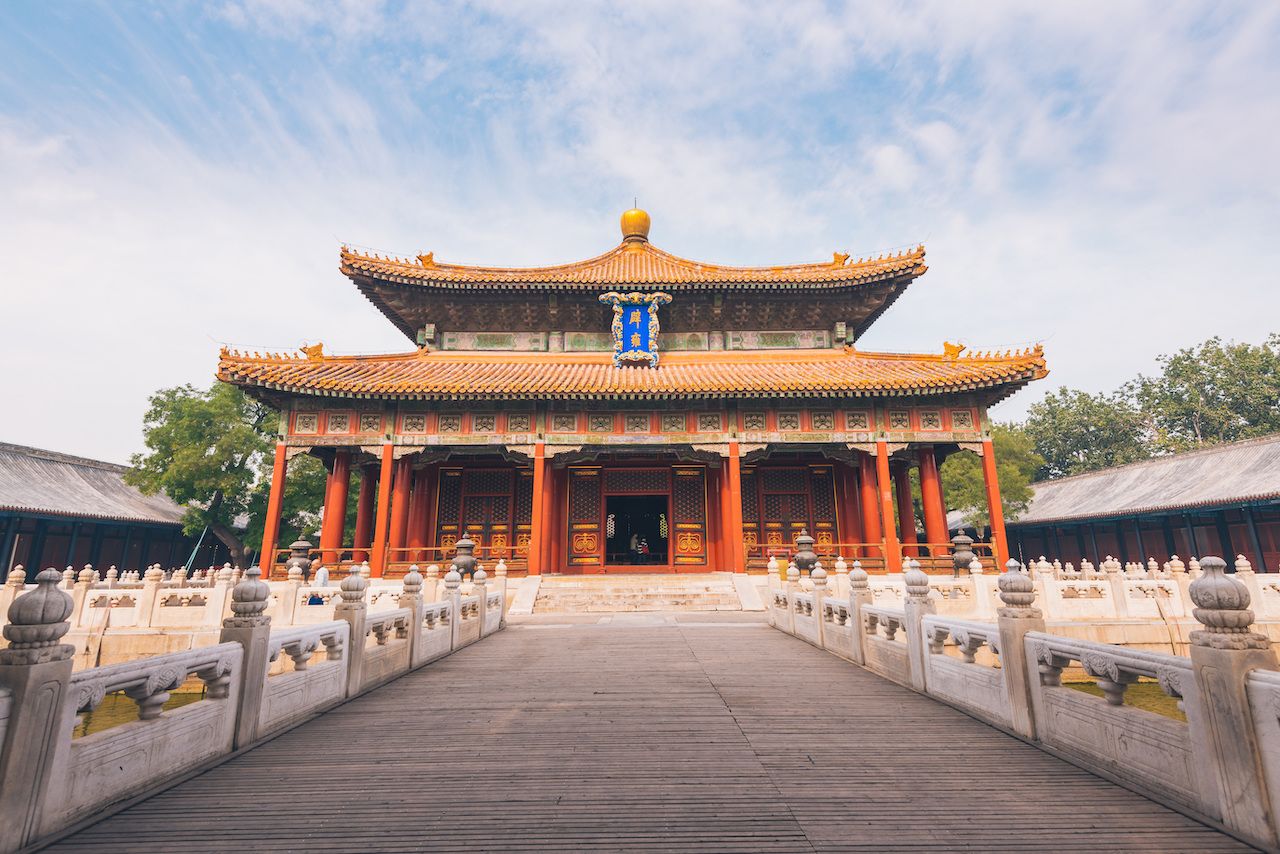 At around 220,000 square feet, the Confucius Temple in Beijing is the second-largest Confucian temple in China — with the largest being in Confucius’ hometown of Qufu. The temple was built in 1302 so that people could pay their respects to the philosopher and was used for that purpose until the early 20th century. It’s comprised of four courtyards along the central axis: the Gate of the Late Master, the Gate of Great Accomplishment, the Hall of Great Accomplishment, and Worship Hall. Inside the front courtyard, there are 198 stone tablets with the names of over 50,000 jinshis (advanced scholars) of the Yuan, Ming, and Qing dynasties.

Also noteworthy is the number of old trees found on the temple grounds; the most famous of these is the Touch Evil Cypress, which is several hundreds of years old. Legend has it that when an infamously corrupt official passed by the tree, it knocked his hat off, and it’s now believed that tree can differentiate between good and evil.

Price: 30 yuan ($4.30), which includes entrance to the Imperial Academy next door 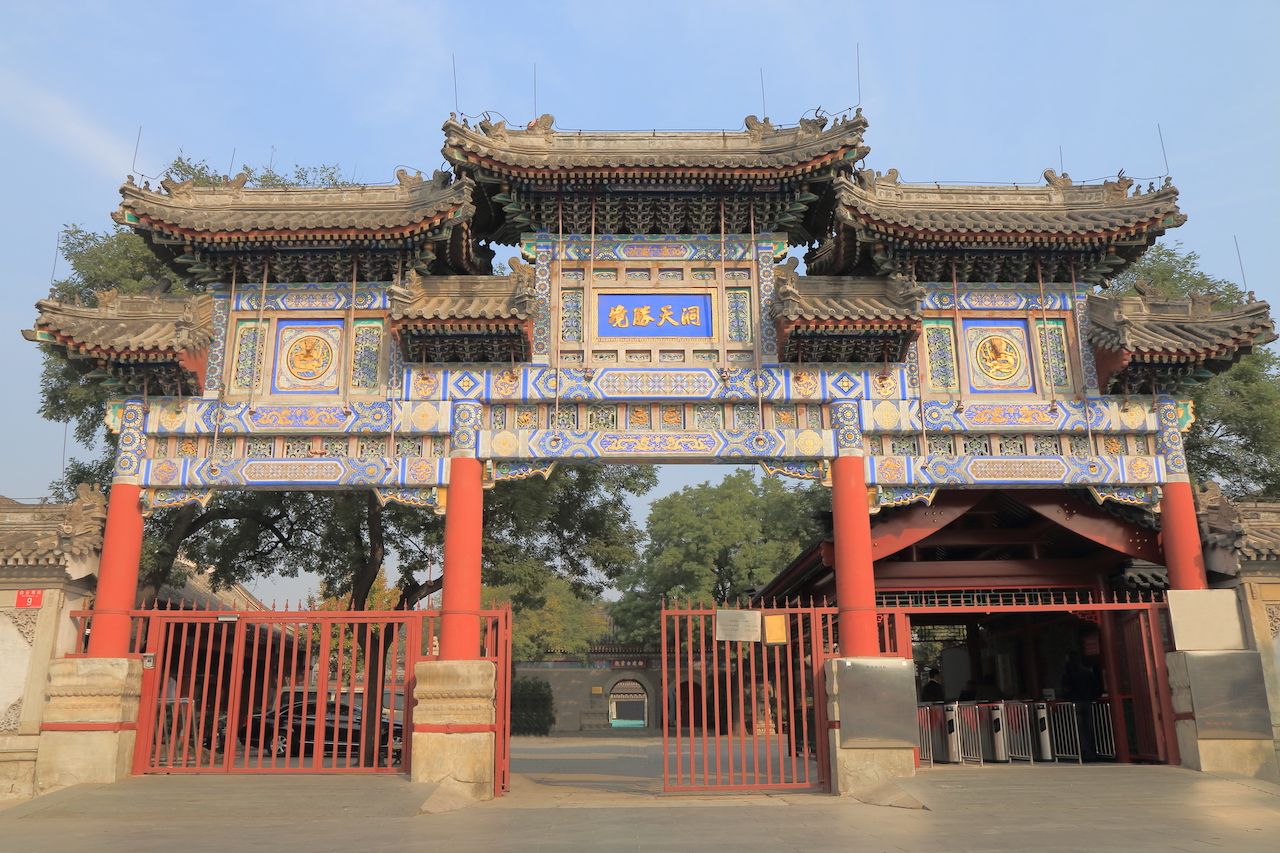 Also known as the White Cloud Temple, Baiyun Guan is one of the three “ancestral courts” of the Quanzhen sect of Taoism and home to the Chinese Taoist Association. It was founded in 739 AD and went through several renovations throughout different dynasties. Along the central path are four main halls — Yuhuang, Laolü, Qiuzu, and Sanqing — and at the entrance are three gates, each symbolizing one of the three worlds of Taoism: Desire, Substance, and Emptiness. Hidden among the grounds that are taken care of by 30 resident monks are three monkeys made of stone. Locals believe that finding all three and touching each of them signifies good fortune. It’s not particularly touristy, being more of a special pilgrimage site for Taoists, so visitors can wander the complex in peace. That being said, it’s popular during the Spring Festival that occurs during Chinese New Year festivities, when a temple fair is held on the grounds. 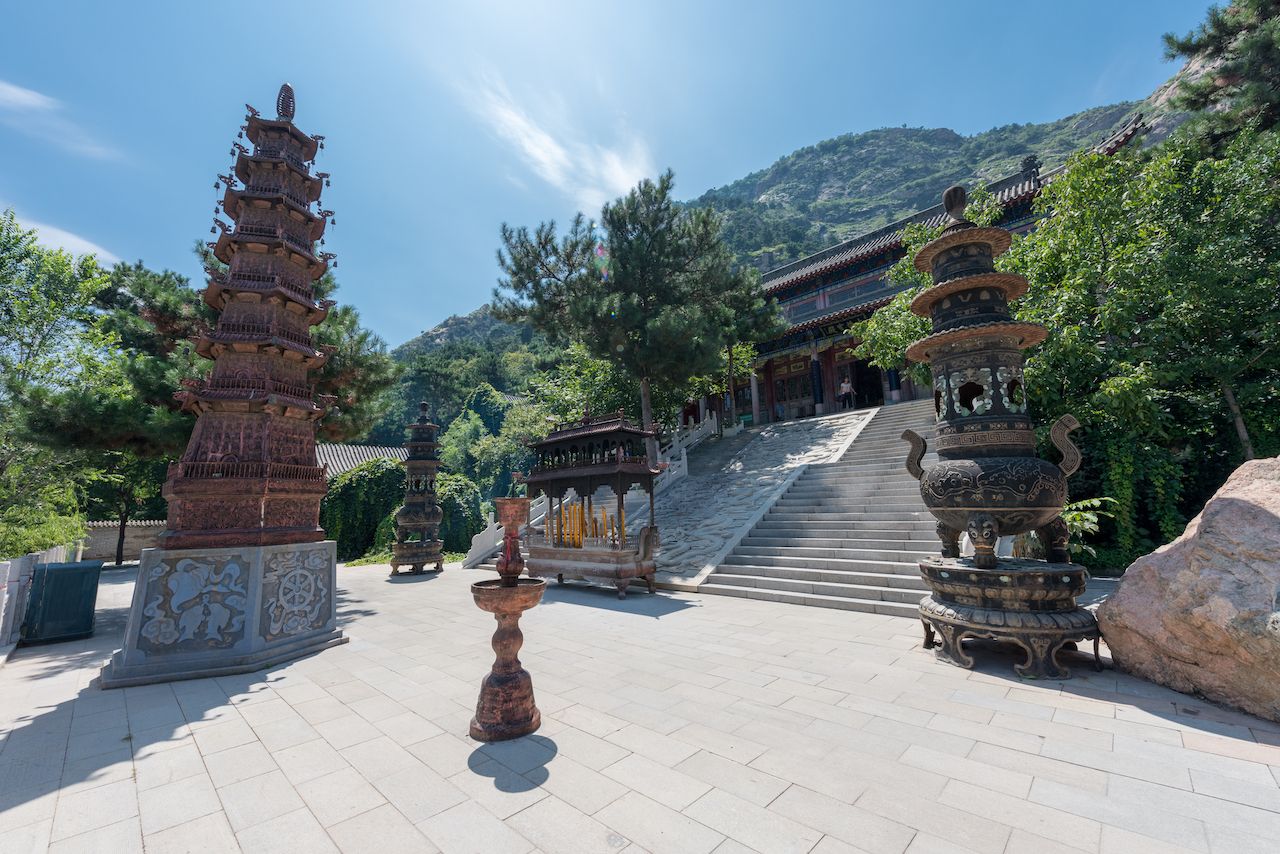 After spending a few days in any urban hub, you’re bound to want a reprieve. At around 25 miles west from downtown Beijing, Tanzhe Temple gives visitors exactly that. Located at the foot of the Tanzhe Mountain in the Western Hills, the temple is surrounded by scenic nature to admire as you get a dose of culture and history. With a history going back over 1,700 years to the Jin Dynasty, Tanzhe is the oldest temple in Beijing — predating the city’s name of Beijing itself — and one of the earliest Buddhist temples in the city, if not the earliest.

The temple is divided into three areas: the central axis, the eastern section, and the western section. Most notable along the central axis is the Hall of Heavenly Kings, with six Buddha statues; the Grand Hall, the temple’s largest hall; and the Emperor and Empress trees, large ginkgo trees that are believed to have a new branch grow out of the root when a new emperor ascends the throne. The eastern section was used by the emperors during the Qing Dynasty for short trips away from Beijing while the western section holds various buildings for prayer, worship, and other dedications. 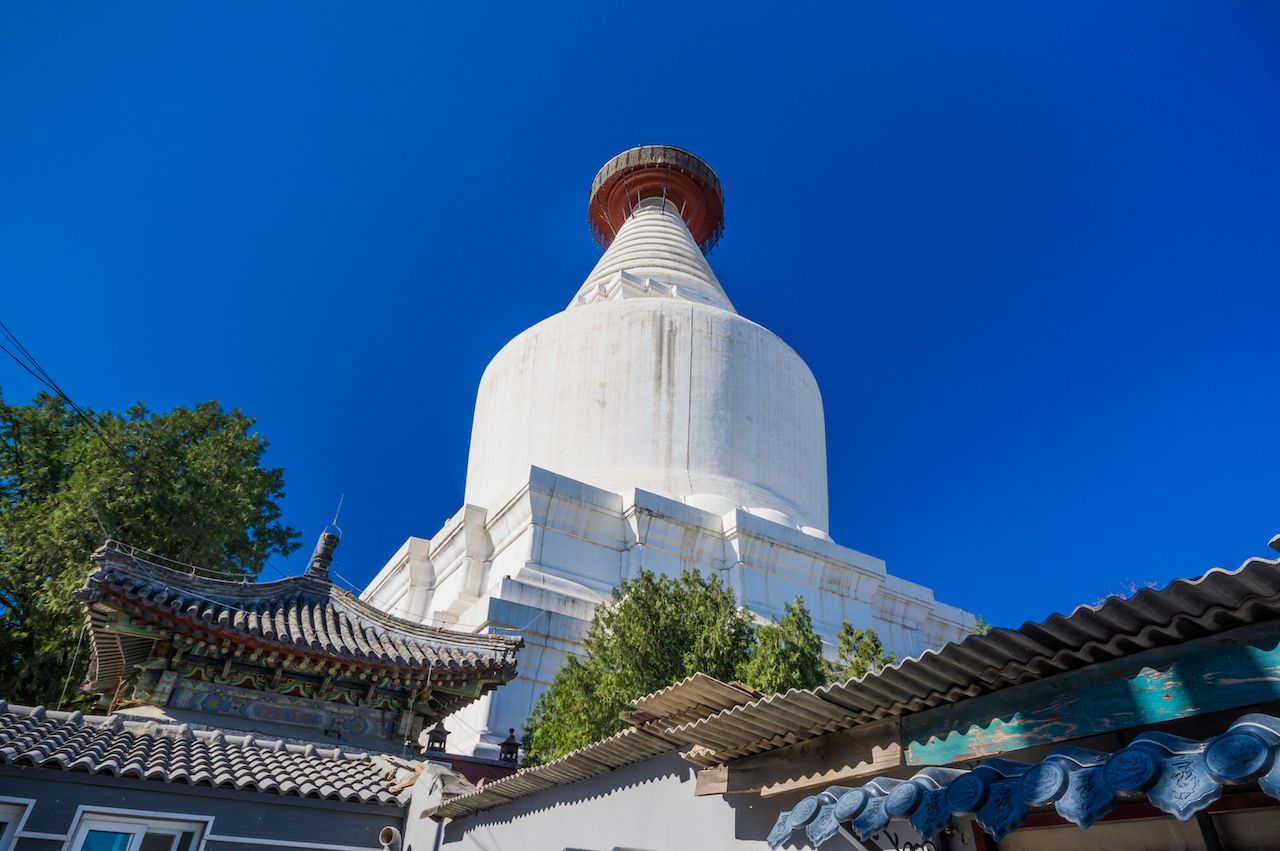 After founding the Yuan Dynasty, Kublai Khan gave permission for a dagoba to be built in Beijing’s Xicheng District so that he could gain favor among Tibetan Buddhists and unite religion with his political power. The white dagoba is approximately 167 feet, making it the tallest Tibetan dagoba in China. It immediately draws the eye of anyone in the area and, as such, gave the temple its nicknames of “White Dagoba Temple” and “White Stupa Temple.” In addition to the white dagoba, there are four halls and a courtyard. One of the halls, the Hall of the Great Enlightened Ones, has thousands of golden Buddha statues in glass cases. 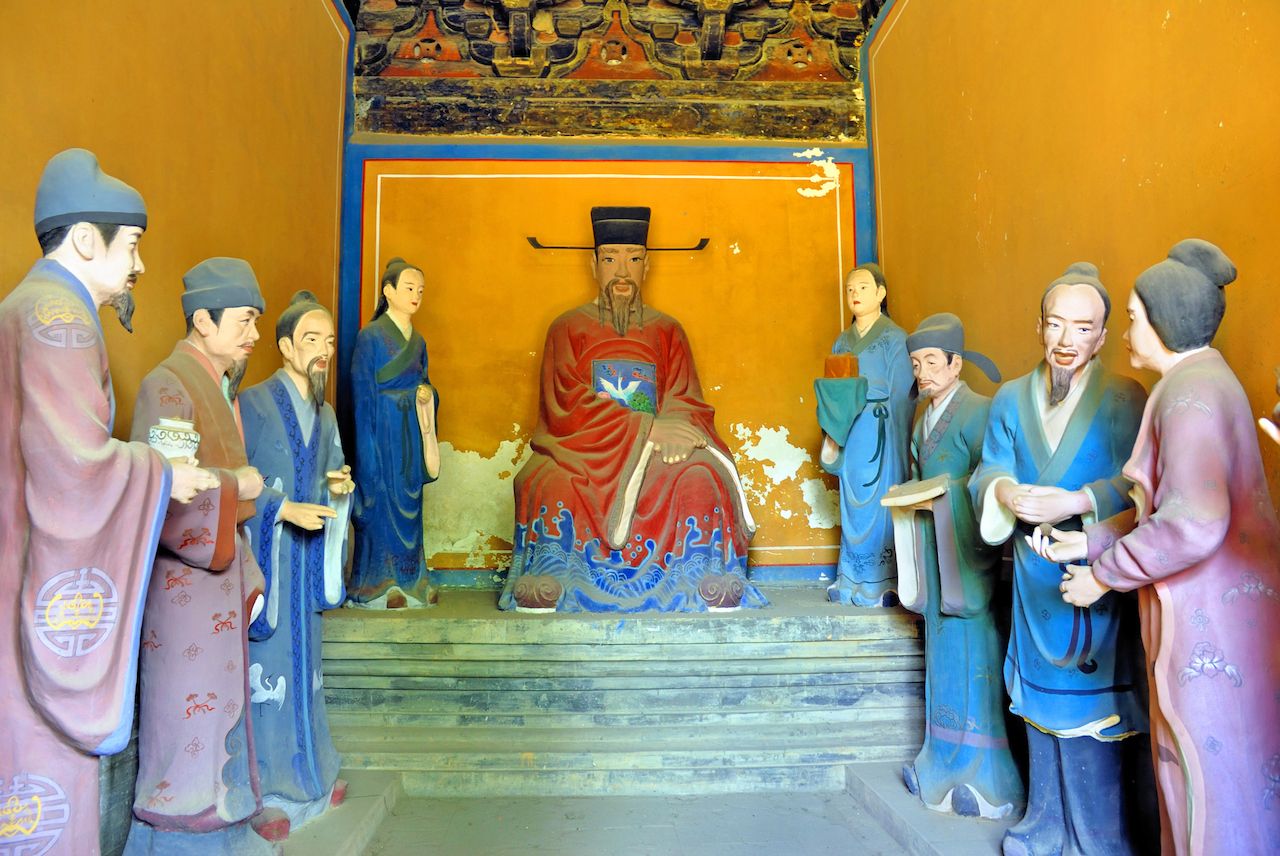 Mountains are sacred in Chinese culture and religion. There are five sacred mountains in China, each representing a particular direction (north, south, east, west, and center). Dongyue Temple is dedicated to honoring the eastern mountain, Tai Shan, and gives off an intriguingly eerie vibe. As per custom, the main buildings are built on the central axis, with the others being evenly placed among the grounds.

An unsuspecting visitor might think nothing of the temple until they get a deeper look into its rooms, which hold peculiar-looking statues. These rooms and statues represent the 76 Departments of Death in Taoism, places that souls go to continue their eternal lives. Some examples of these are the Life and Death Department, Department of Wandering Ghosts, and the Department for Implementing 15 Kinds of Violent Death. While most of the rooms will greet you with figures of the underworld, not all is doom and gloom as some of them are dedicated to monks, worship, and prayer — such as the Department for Increasing Good Fortune and Longevity.

If you haven’t had your fill, also on the grounds is the Beijing Folk Museum. The best time to visit is during one of the annual festivals, like Chinese New Year, the Mid-Autumn Festival, and the Dragon Boat Festival, when a ton of different activities and performances are held.

Archaeology10 Things You Need To Know Before Visiting the Great Wall of China
Tagged
Art + Architecture Religion Trip Planning Beijing, China
What did you think of this story?
Meh
Good
Awesome

8 Sweet, Savory, and Delicious Chinese Desserts You Have To Try

Traveling To Palestine Is Easier and Much Safer Than You Think