Like every American tourist destination, Atlantic City, New Jersey was hit hard by COVID-19. While the nine major casinos are mostly the reason that people flock to AC, the chorus lyrics from the Bruce Springsteen acoustic song of 40 years past still ring true today: People from nearby Philly, North Jersey, and even NYC are still putting on their makeup, fixing their hair, and meeting in Atlantic City (sometimes lovingly referred to as the Vegas of the Northeast). And they are eating at some of the best traditional Italian restaurants in the country.

The boardwalk, beaches, and casinos remain AC’s main attractions, but even vacationers busy at the slot machines need to eat. Since it’s New Jersey, Italian food is the go-to, and there are several traditional Italian restaurants in Atlantic City worth trying. They range from intimate hole-in-the-wall spots where the walls are lined with pictures of every celebrity who dined there since pre-casino days to fancy white tablecloth establishments straight out of a 1990s Scorsese film.

Here’s what you need to know before stopping into any of these restaurants for dinner: All of the traditional Italian restaurants on this list are closed Monday, with the exception of Girasole. And none serve lunch. Interested parties should plan to make a reservation, especially on weekends. For Chef Vola’s, you’ll likely need reservations weeks in advance. Otherwise, the restaurant will put you on a waiting list.

The farther you get from the boardwalk, the more likely these traditional Italian restaurant is to have a private parking lot. This is the case with Angelo’s, Angeloni’s, and Cafe 2825. For the rest, you’ll have to use a paid lot or metered street parking. All are within a 10-minute drive from the boardwalk.

So for your next trip to Atlantic City, we recommend skipping the casino buffets, foregoing the boardwalk food, and instead trying one of these traditional Italian restaurants. 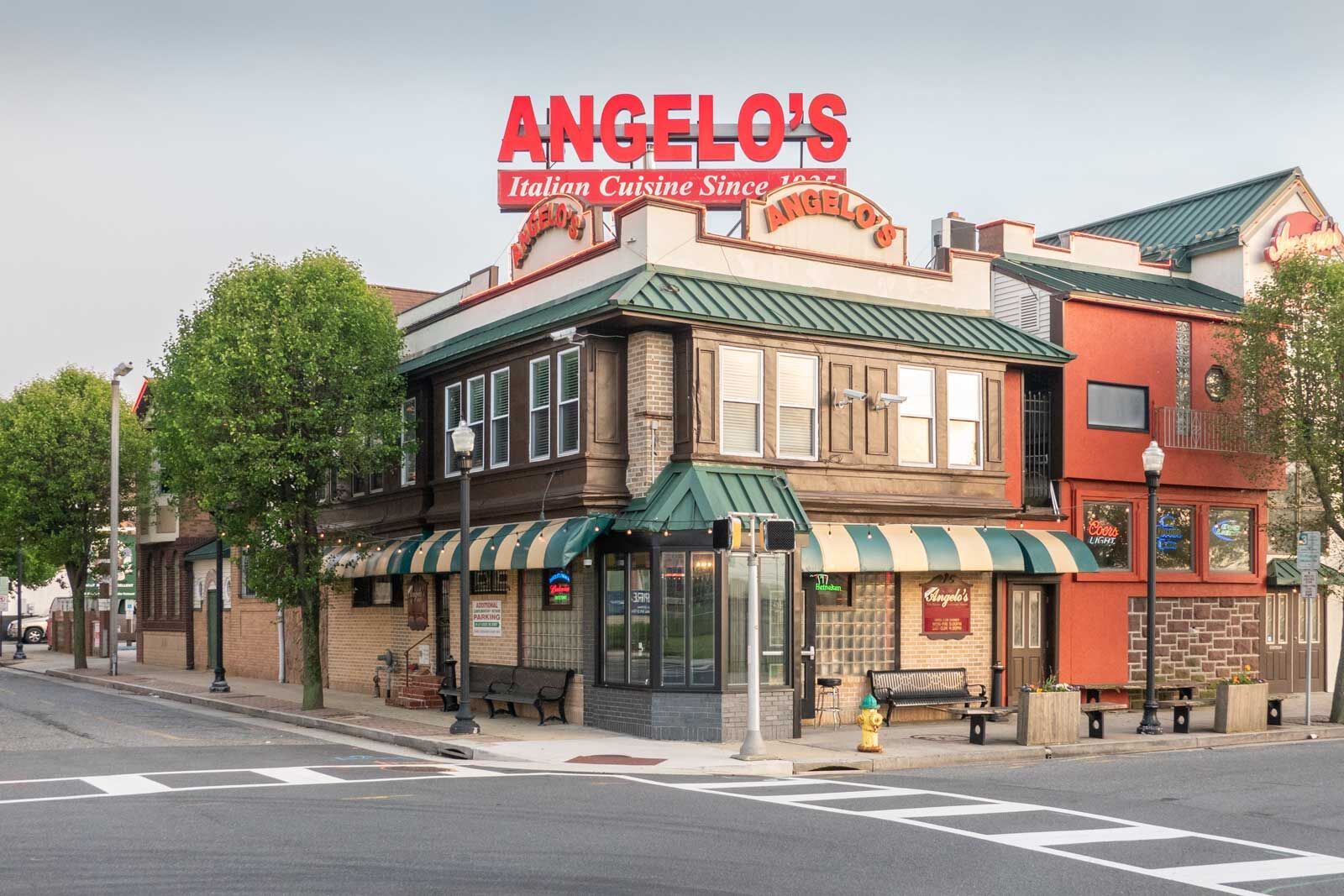 If you’re driving into town via the Atlantic City Expressway, the giant red Angelo’s sign will be one of the first things you’ll see. Located on the edge of the former Italian-American enclave of Ducktown, Angelo’s Fairmount Tavern (named after the address at the intersection of Fairmount and Mississippi) has been serving Mancuso family recipes since 1935.

You’ll see a lot of baseball-sized meatballs served here, to patrons who are more than used to watching first-timers gawk at the sports memorabilia that adorns every wall. In fact, Angelo’s can easily double as a sports museum. The restaurant’s decadent lobster ravioli served in a blush sauce, topped with jumbo lump crab meat and a six-ounce lobster tail, is a popular special. 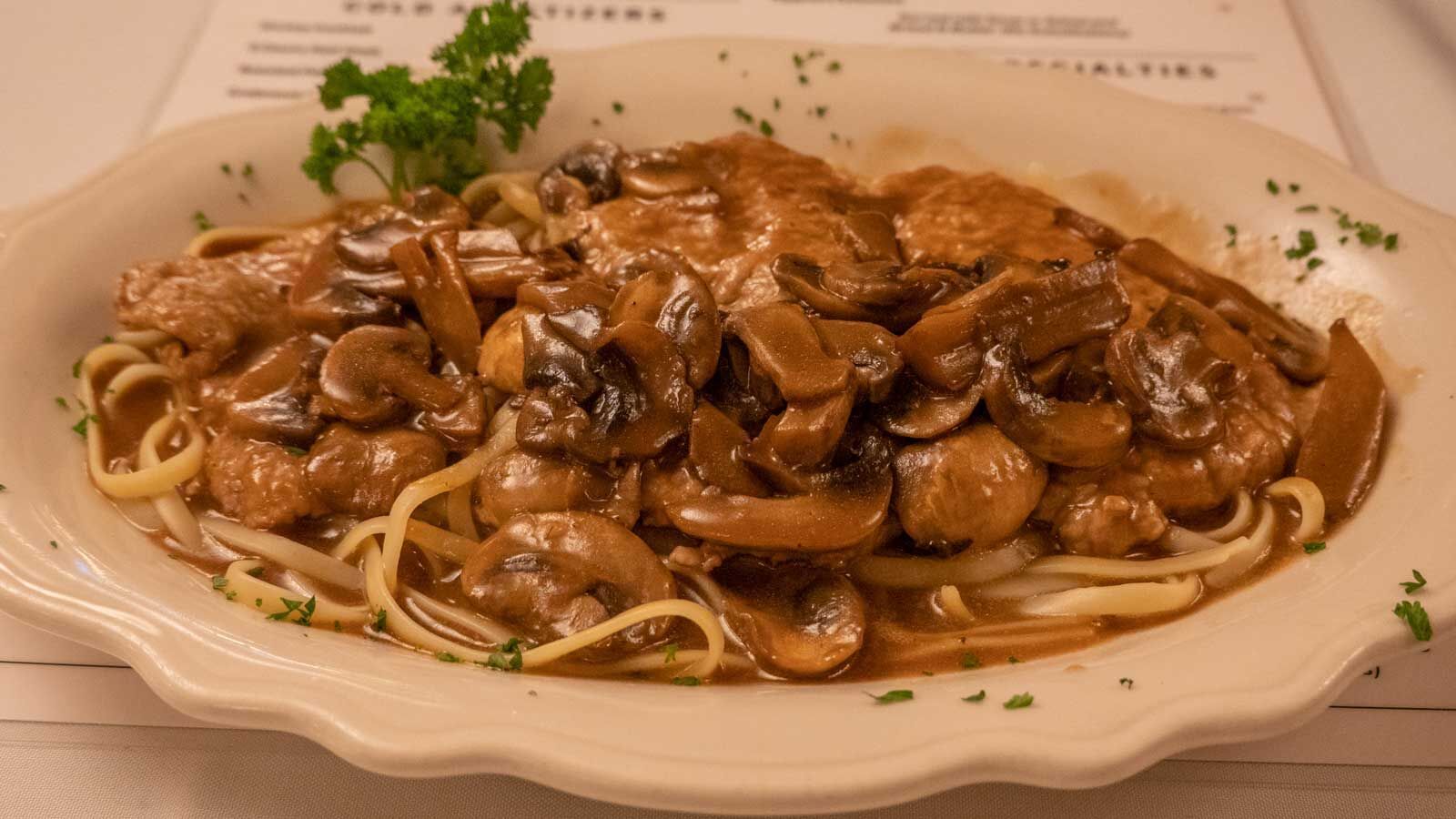 Located in the heart of Ducktown, Angeloni’s II started in Trenton and is also one of the most beloved red sauce joints in Atlantic City. If you use the Arctic Avenue entrance, you’ll likely feel like you’ve entered a neighborhood sports bar rather than an old-school Italian restaurant. While the bar is probably the most fun spot (especially if you’re a Yankees fan), there are also two white tablecloth dining rooms with some of the more than 350 wine bottles on offer nestled into the walls.

The veal dishes are the most popular, especially the brasciole. Ask the staff why people come to Angeloni’s, and they’ll be quick to tell you that it’s the red sauce and wine selection that keeps patrons coming back. The meatballs are also a mainstay. Stop by on a Thursday night, and you can have two free meatballs with each martini. 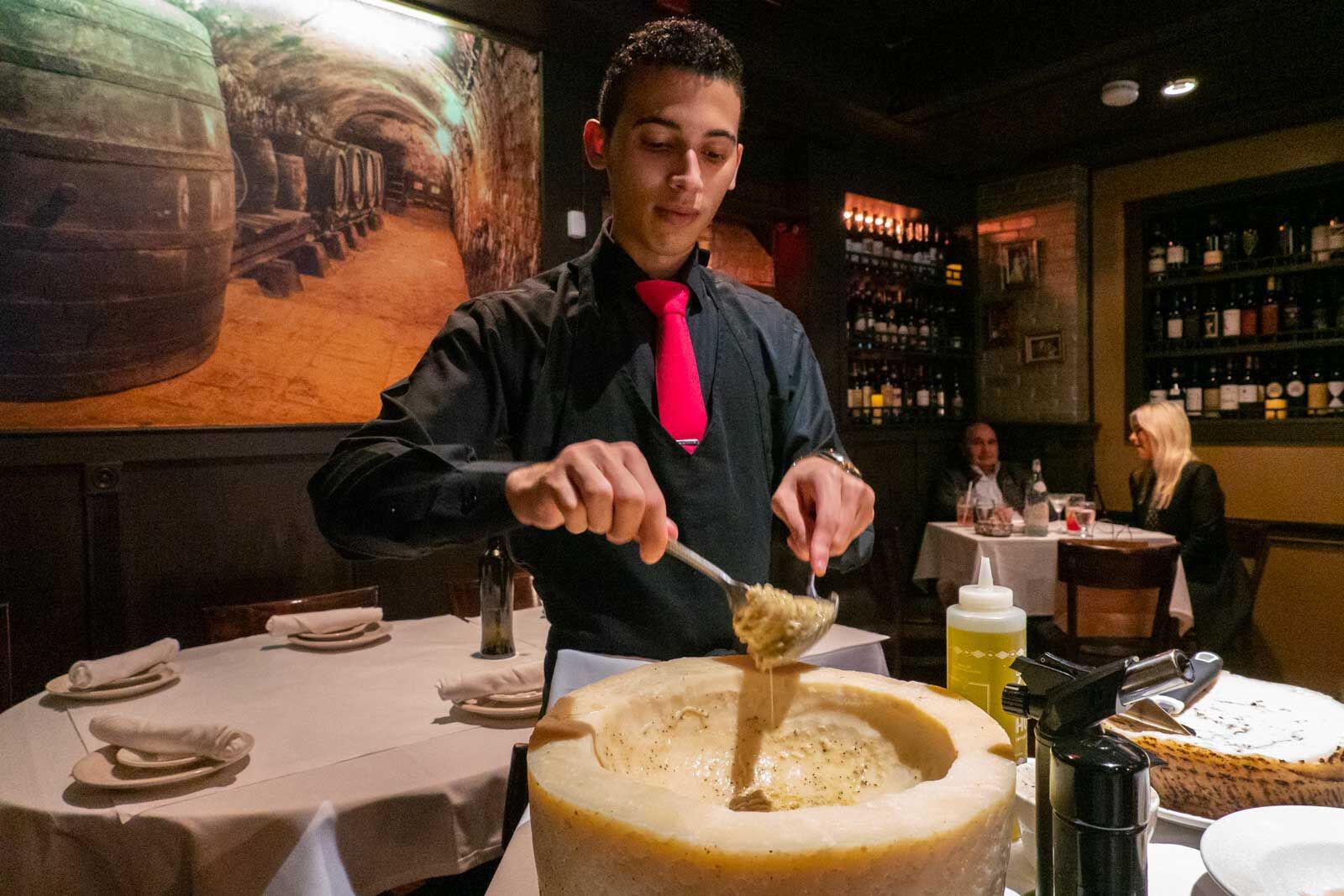 At Cafe 2825, even the menu has an “old school” section of Neapolitan and Sicilian appetizers. While it’s known for their Southern Italian and Sicilian small plates, first-timers should try one of the restaurant’s four tableside experiences. While you can’t go wrong with the handmade warm burrata (which they prepare straight from the curd) or old-world caesar salad, it’s the cacio e pepe that you’re likely to see at every other table.

And first-time patrons may think they found that one New Jersey Italian restaurant without a picture of the Sopranos hanging on the wall, but there is one in the men’s bathroom, and it’s more than double the size of the nearby black and white vintage shots of old Yankee Stadium. 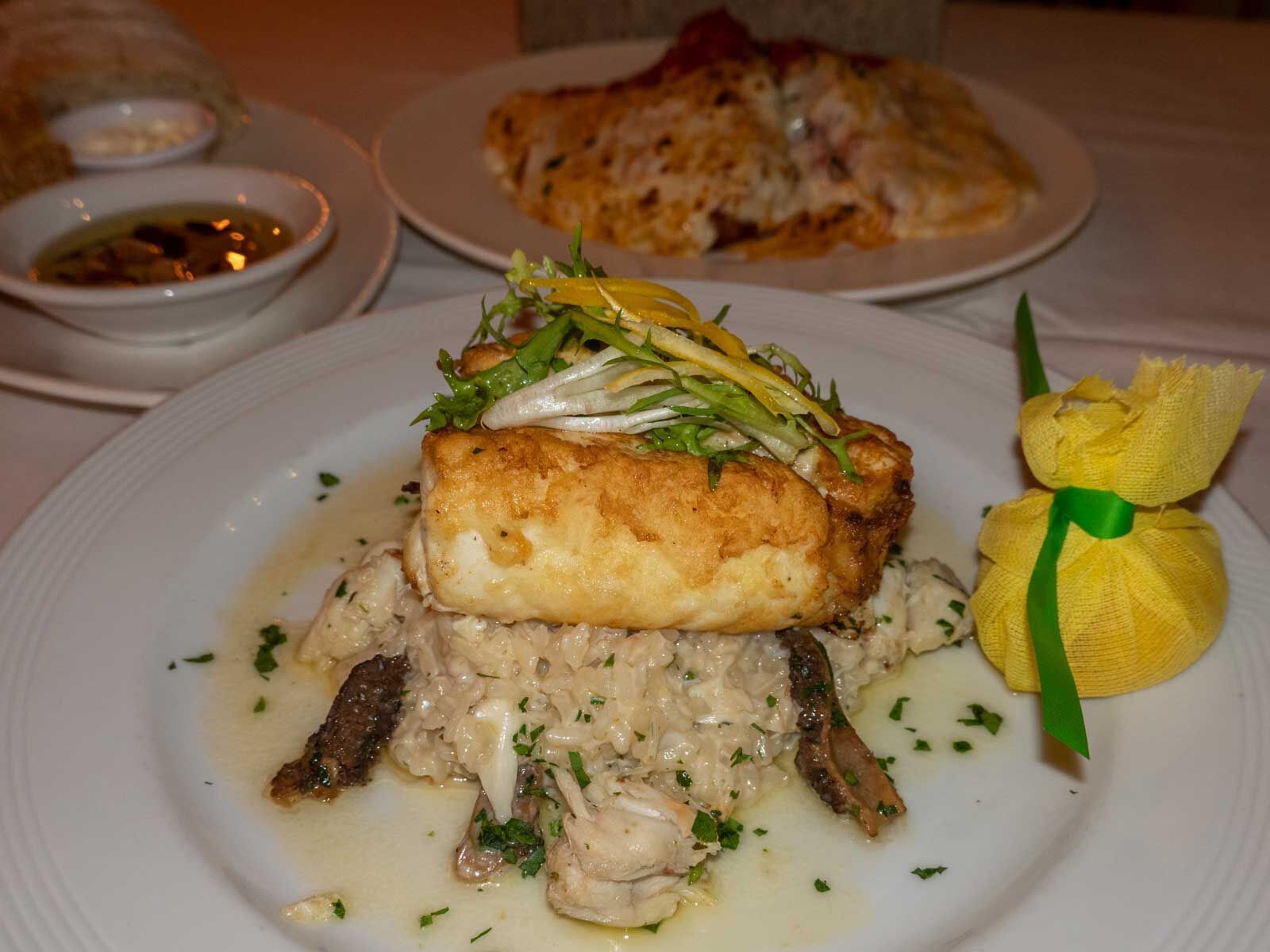 The only casino restaurant on this list dates back to 1979. Capriccio serves high-end Italian fare in an elegant setting with white tablecloth, high ceilings as well as ten incredibly detailed murals of the Carnevale di Venezia, or Carnival of Venice. You might expect a place like this to serve small portions, but it’s the complete opposite, as the portions border on family-style. Many come here for the veal, which will be a tenderloin cut, regardless of which preparation you order.

During the warmer months, you’ll have the option to forego the main dining area for veranda seating, just one floor above the famous Atlantic City boardwalk. Thanks to the smell of saltwater along with views of The Wheel and the possibility of random nightly boardwalk entertainment, this seating arrangement can be just as enjoyable as sitting under an ornate chandelier in the main dining room. 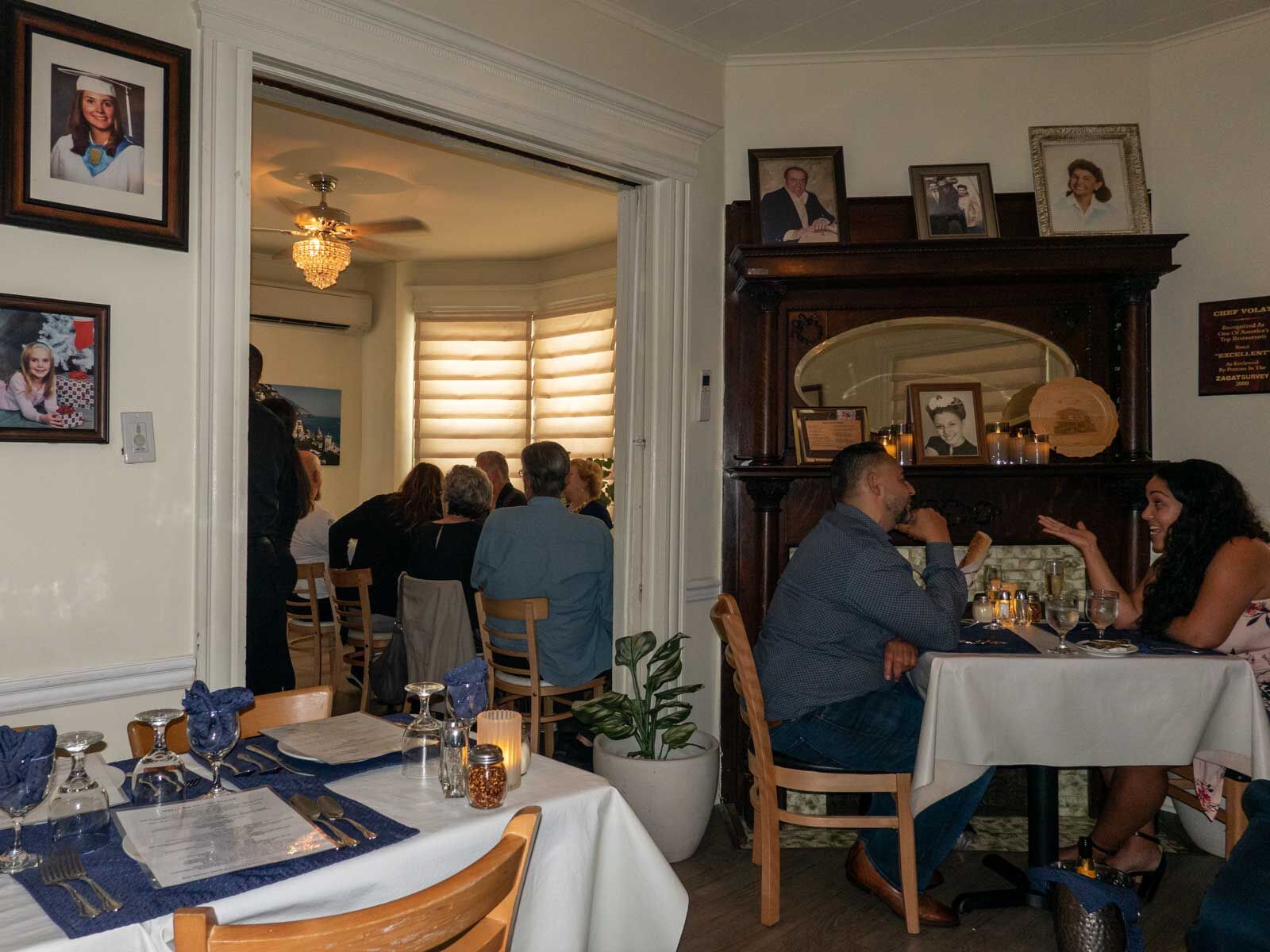 Chef Vola’s is exclusive without being pretentious. The restaurant has no working website, nor do they use social media. And it just started accepting credit cards in 2020.

The fact that the restaurant is located at the end of a one-way street, where half of the buildings are boarded up, does not deter patrons from Beyonce and Jay-Z to Chris Christie and a who’s who of former Sopranos cast members from trying to score a coveted table. But you need to call weeks in advance to get one of those.

Once you’re seated, your server will go over the menu with a confidence comparable to that of a car salesman, but without the pressure. The signature pounded rib veal chop is their most popular dish. While not a traditional Italian dish, the crab cakes are worth a try, especially if you’re tired of overpaying for hockey puck-sized imposters where you can’t find actual crab meat. 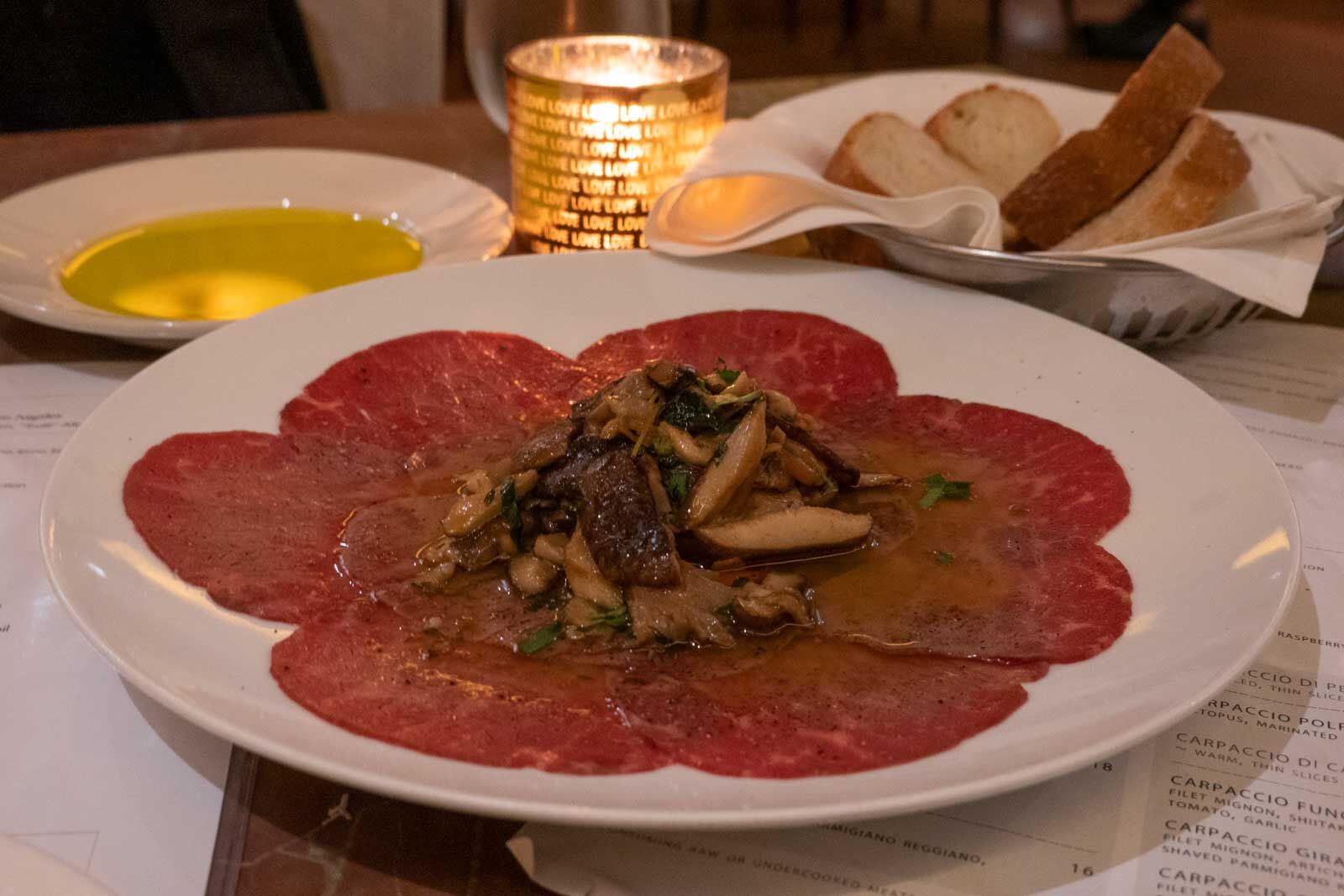 Girasole is the most romantic Italian restaurant in Atlantic City. It’s also the only place on this list that serves pizza. The restaurant uses wheat flour imported from Naples, which is where the Iovino family emigrated from in the late 1980s. 17 family members currently work at this dimly lit lounge-esque Southern Italian Restaurant.

While you can’t go wrong with any of the pies, you should also try the whole branzino baked in sea salt. The team will filet the fish at your table and serve it with a side of greens. There are also eight different carpaccio options, with the namesake girasole being the most popular. The funghi is topped with shiitake and porcini mushrooms which are served hot enough to cook the ultra-thin slices of filet mignon. For dessert, try the croccantino, which you will not find at any of the other old-school Italian restaurants on this list. 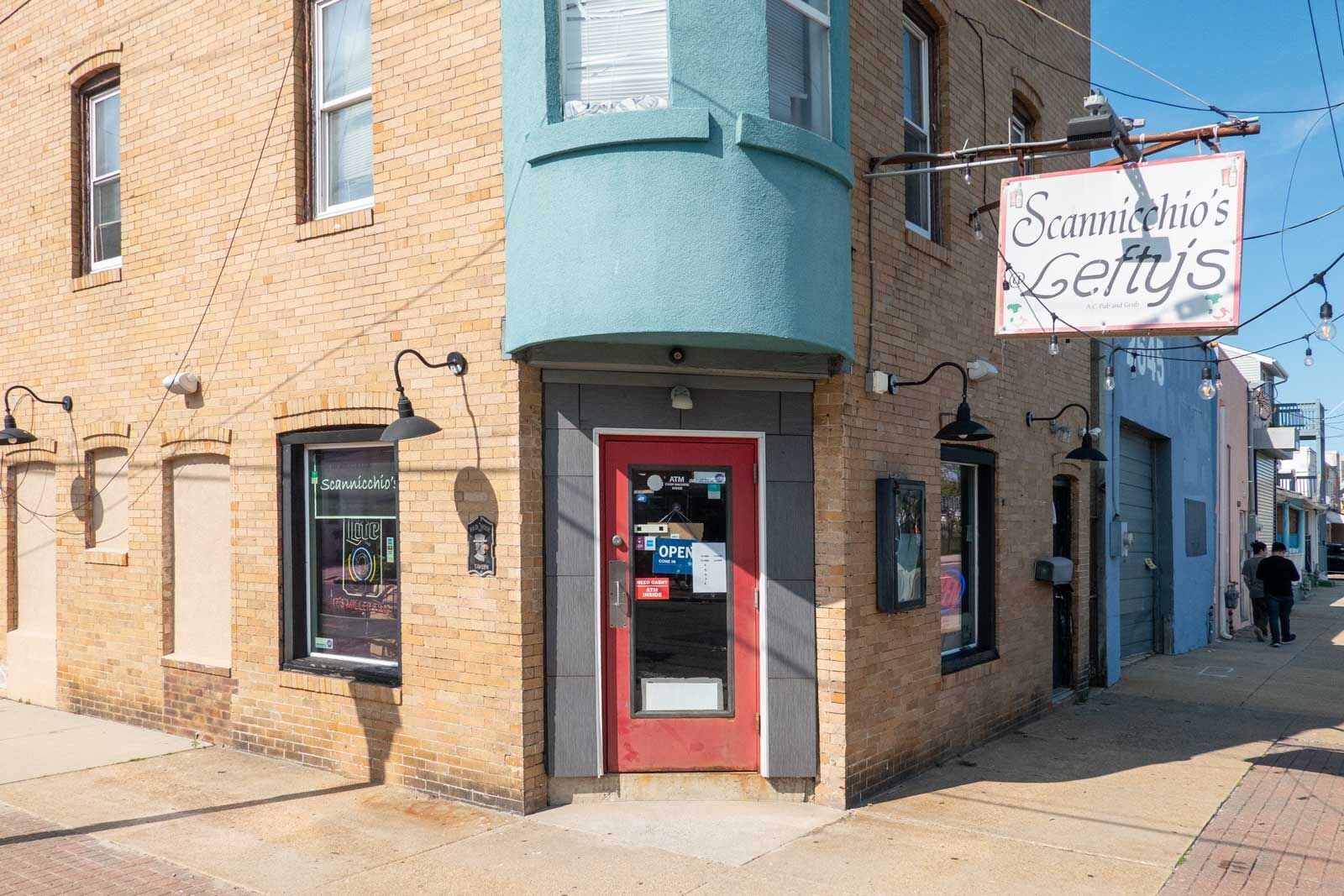 The original location was destroyed by Hurricane Sandy, but Sacchianno’s is now operating in a shared space with Lefty’s Pub & Grub, just outside Ducktown. Inside, the place is nothing fancy, but the food is as good as any you’ll get in a white tablecloth restaurant.

Try one of their namesake dishes: The Seafood Scannicchio is a condensed version of The Feast of the Seven Fishes, but with all shellfish, including lobster, over a bowl of pasta. You’ll have the option of red sauce, white, or fra diavolo.

If you’re more of a meat lover, try the Steak Big John, which is named after 84-year-old owner John Varalli. The 12-ounce strip is topped with breaded shrimp and scallops and then finished off with a thin layer of mozzarella cheese. If you can’t make it to Atlantic City, you can also check out the other Scannicchio’s, which is located off the Broad Street Line in South Philly.