Rent a car in Tallinn, Estonia, and in just seven hours, you could cross all three Baltic capitals off your travel list. The Baltics were made for road-tripping with their uncongested highways and uncluttered views, but avoid the temptation to drive straight south to Vilnius, Lithuania, by way of Riga, Latvia, simply to say you set foot in all three cities in one day. Instead, pick a single destination, maybe two, that’s best suited to your travel personality and make it your Baltic base, really delving into its castles, cuisine, scenery, or whatever else drew you there. 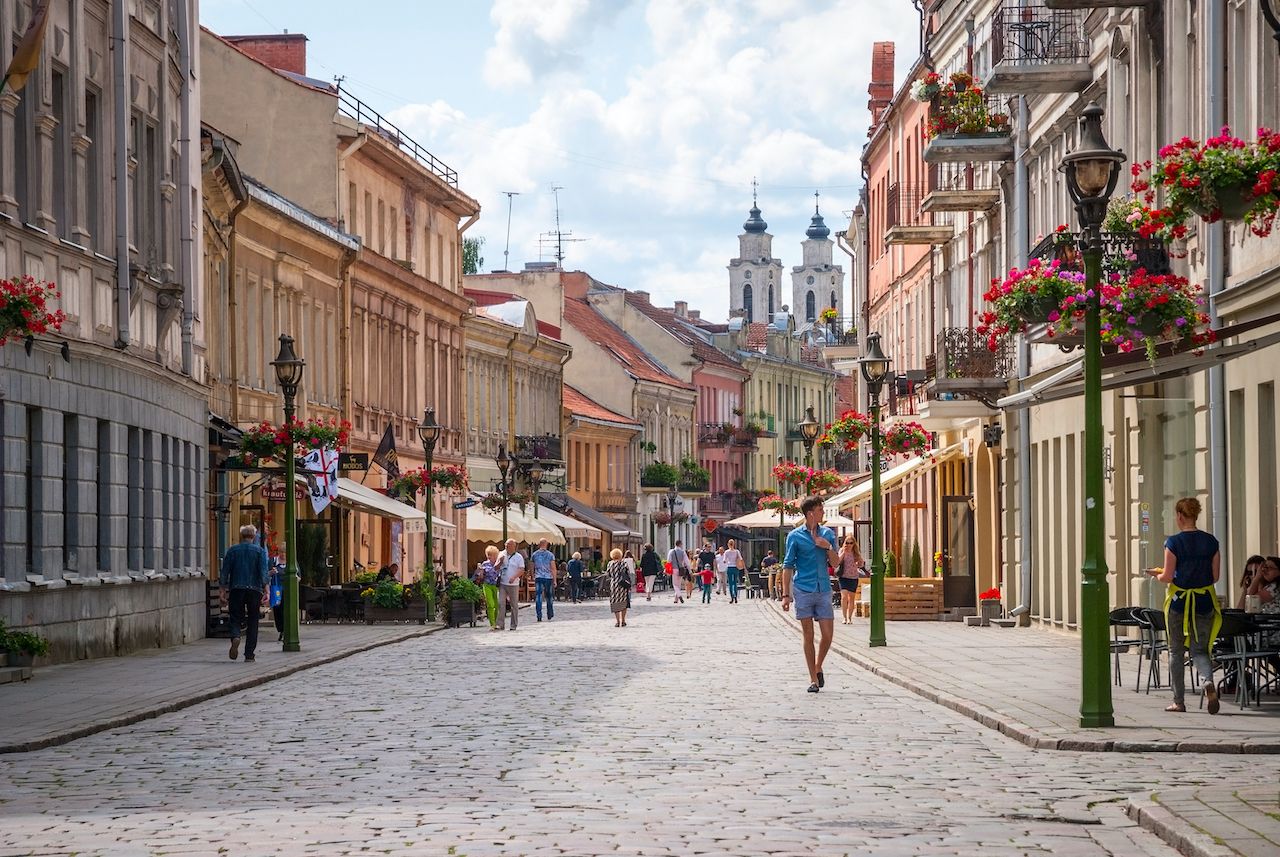 Baltic cuisine mixes meat-and-potatoes mains with seasonal ingredients like root vegetables, wild mushrooms, berries, and greens, plus fresh farmers cheese that can be melted into eggs at breakfast or slathered with honey after dinner. In Lithuania’s second city, sample the region’s best at upscale restaurants like Uoksas, try street eats like cepelinai (stuffed potato dumplings) in view of the city’s 14th-century fortress complex, and see what’s cooking in contemporary kitchens like Ieti’s. For a fun, albeit tourist-leaning, introduction to Lithuanian cuisine, try chain restaurant Etno Dvaras in Kaunas’s old town, then swing by Spurgine on Laisvės Alėja for doughnuts that have been satisfying locals with a sweet tooth for decades.

If you can, hold off on visiting until 2022 when Kaunas will be an official European Capital of Culture. Not only will you have access to foodie landmarks like the massive Central Market but also special events commemorating Lithuania’s arts and heritage throughout the year.

2. For music and nightlife: Tartu, Estonia 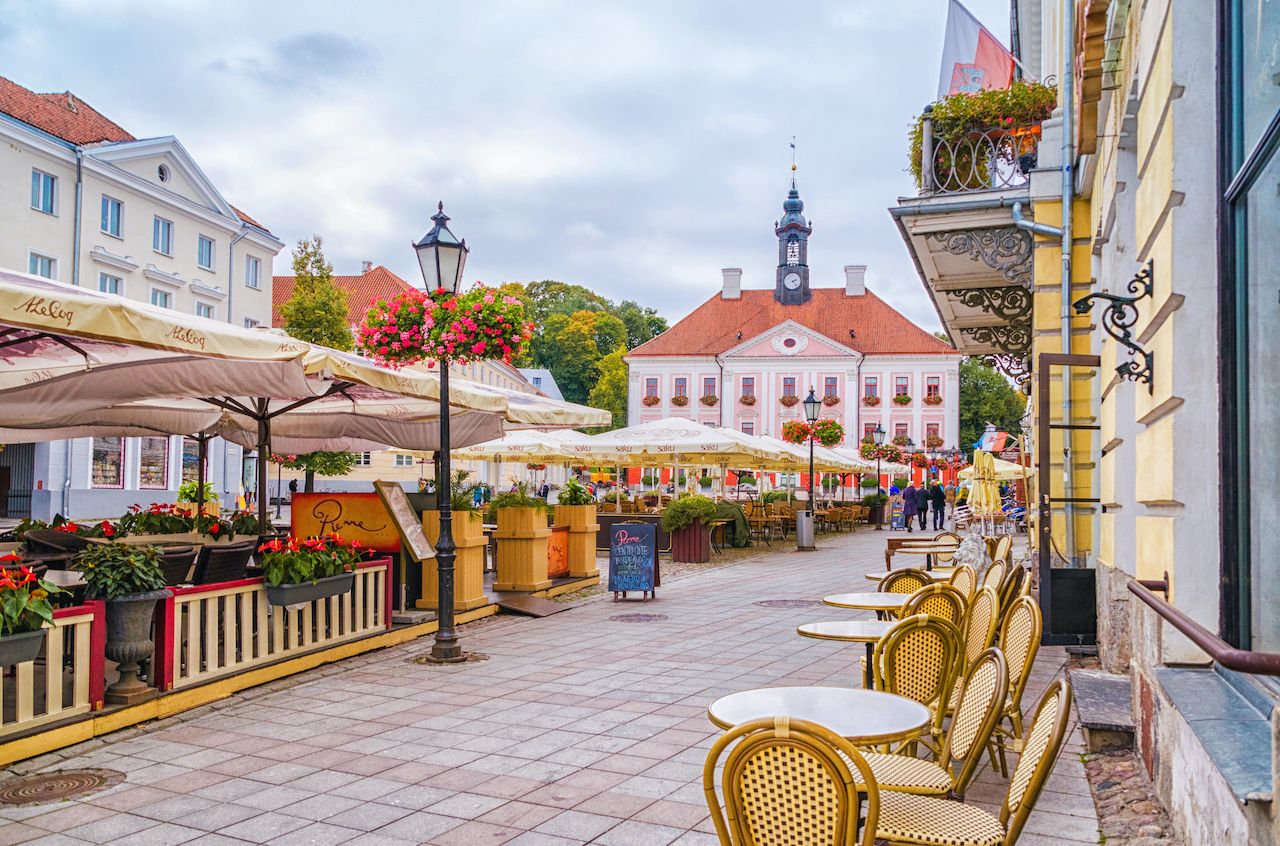 You can always count on a student city for a good party, and Tartu, home of Estonia’s national university, makes good on that promise. Many of the city’s bars have an underground feel and fun, eclectic decor. Some are literally underground. On weekends, rowdy students wind up at crazy-crowded clubs like Illusion and Maasikas while others sip beers in Pirogov Park, the one place in town you can drink outside in public. Hip students head to counter cultural arts-and-nightlife center Genialistide Klubi for drinks, caffeinated or alcoholic, and dancing. Hip professors probably knock one back at no-frills Zavood after class.

Non-drinkers can still enjoy Tartu’s nightlife, which is music-heavy with venues for fans of jazz, rock, hip-hop, electronic, and most other genres. Music lovers will also appreciate the city’s events calendar, which makes room for everything from rhythm and folk festivals to philharmonic chamber choir concerts every year. 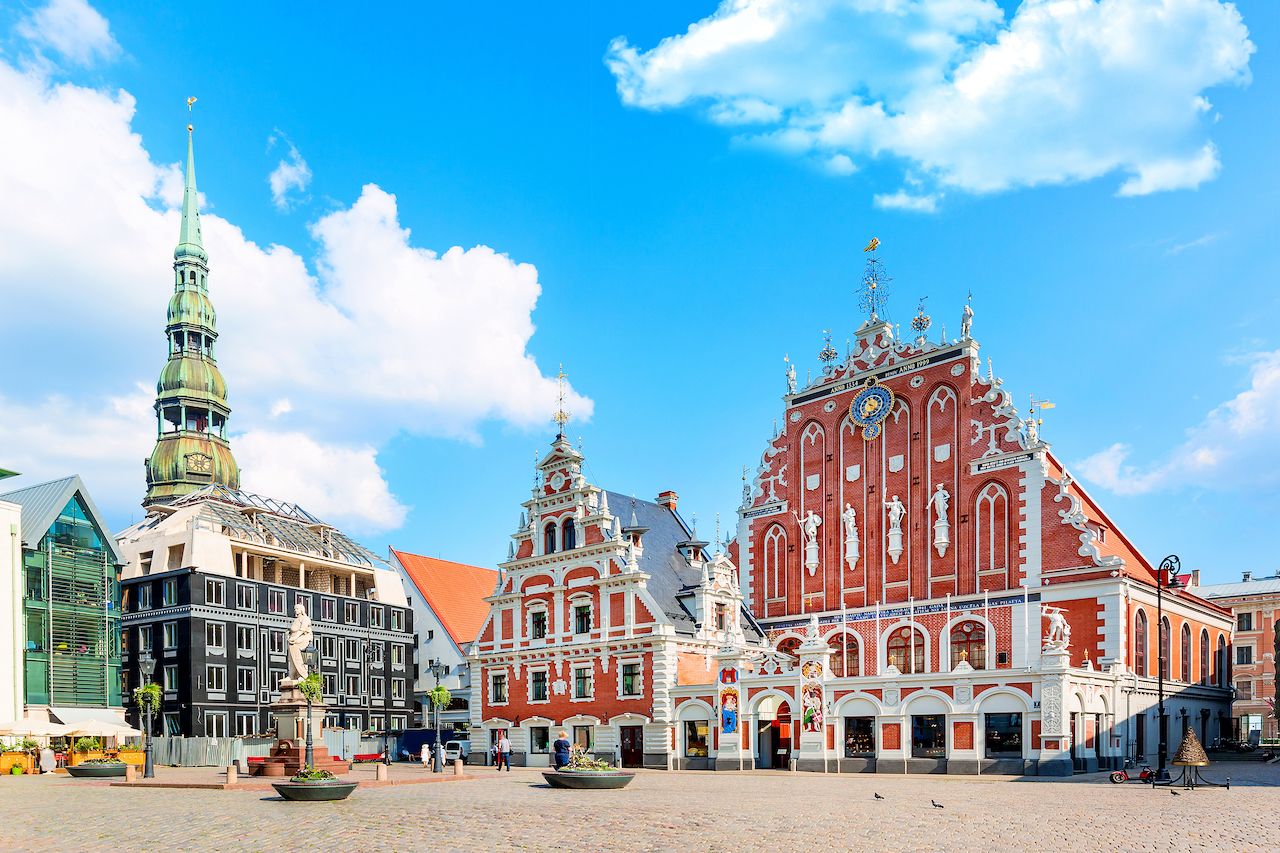 If nothing else, it’s a treat to look at with its UNESCO-listed medieval old town and beautiful wooden and art nouveau architecture. Something of a living museum, Riga’s also a museum city that displays collections on Latvian artists like Vilhelms Purvītis and Janis Rozentās, as well as antique vehicles, chocolate, history, and even hats. Theaters around the city stage plays, operas, and ballets alongside avant-garde performances and puppet theater. When not attending specific events, creative types gather at all-purpose art spaces like the Kanepes cultural center, Splendid Palace cinema, and Kalnciema Quarter, which hosts everything from open-air concerts and exhibitions to a weekly farmers and artisan market.

Add in a rapidly growing foodie culture, an ice hockey team the city loves to support, and a new generation of bar and business owners bringing new life to Riga, and Latvia’s capital is exactly the sort of place culture hounds should base themselves while in the Baltics. 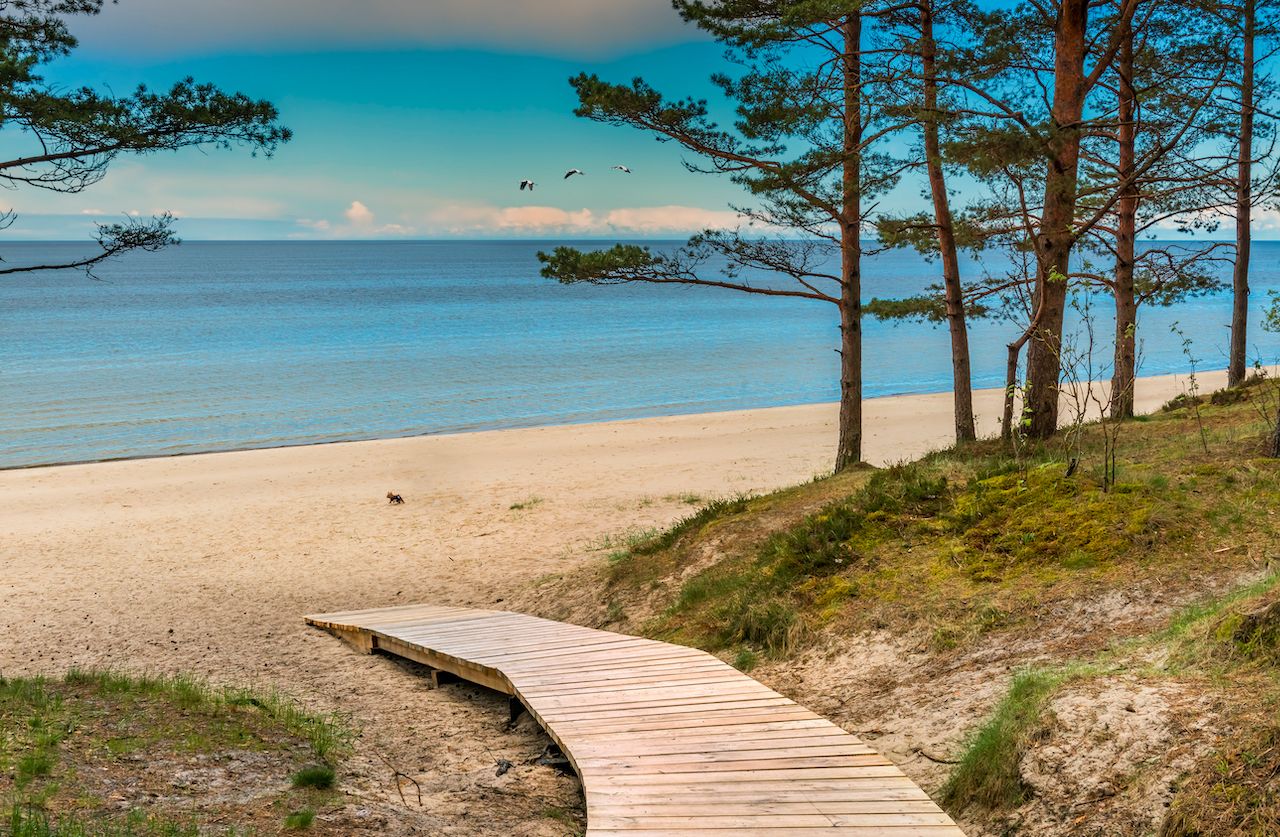 Much like New Yorkers summering in the Hamptons, Rigans drive an hour west to Jurmala when beach weather hits. Latvia’s top seaside resort may not have the place-dropping currency of the Hamptons, but its white-sand beach and many spas have long attracted monied Latvians. Wellness-focused accommodations like the Baltic Beach Hotel & Spa are still easy to come by.

Jurmala is technically a collection of fishing villages, but most of the action centers on Dzintari and Majori, which share a half-mile wooden promenade that opens to panoramas of the Baltic Sea. During summer, travelers can catch events and festivals here like beach volleyball tournaments and shows at the Dzintari Concert Hall. Summer’s also the nicest time of year to explore nearby Kemeri National Park, which swaps out Jurmala’s promenade for a bog boardwalk that weaves past pools, pines, wildlife like sandpipers, and much more. 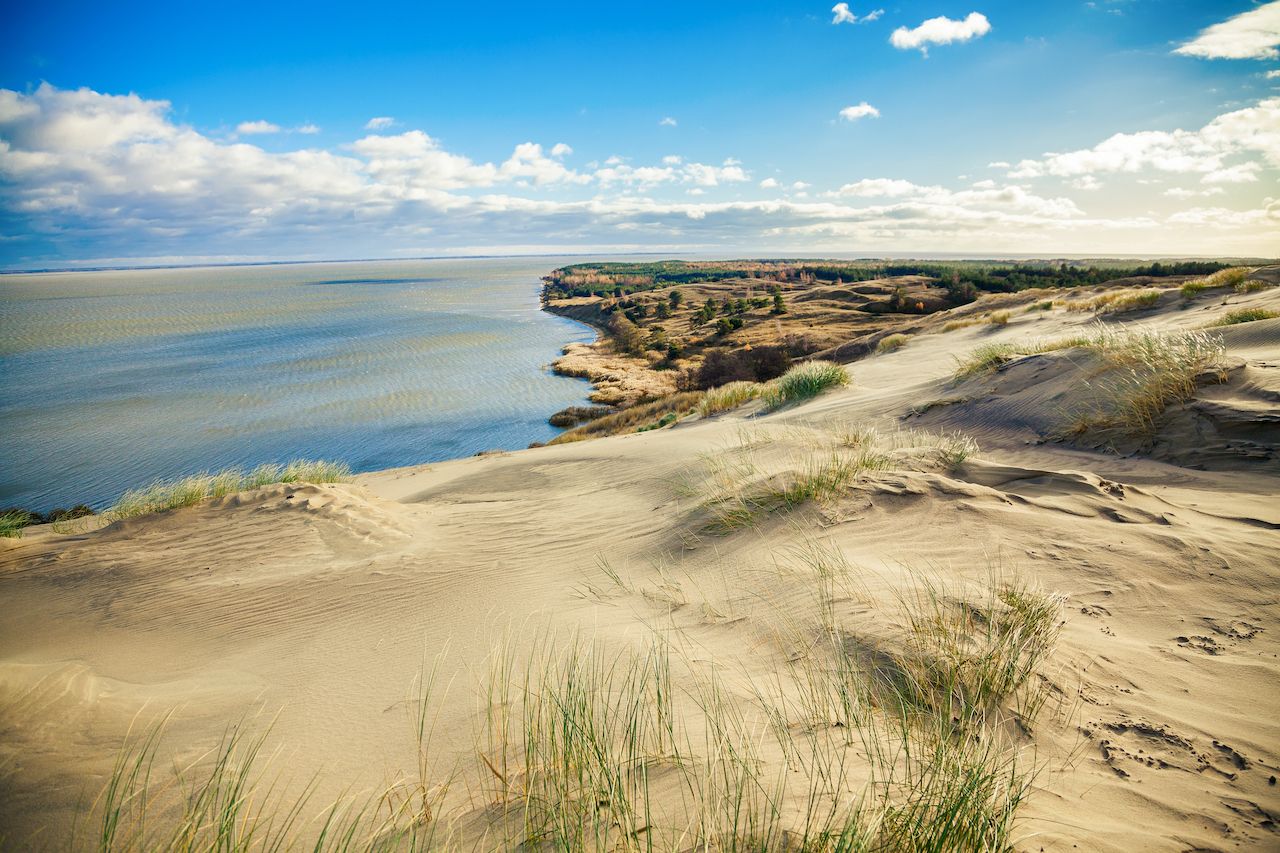 Anyone really committed to spending their Baltic tour outdoors should consider tackling the 745-mile Baltic Coastal Hiking Route, a section of the longer European E9 route that maps a path from Nida on the Latvia-Lithuania border to the port of Tallinn in Estonia. For everyone else, there’s Curonian Spit National Park, which is shared by Lithuania and Russia, whose side is named Kurshskaya Kosa National Park. In 2000, UNESCO protected the sand-dune-laden, pine-forest-peppered land for both its natural value and historical significance due to the prehistoric settlements discovered there.

Outdoorsy types can tucker themselves out on beaches, bays, hiking trails, dunes, and more during the day. At night, they’ll retreat back to Nida where there are several guesthouses and basic backpacker accommodations. More accommodations and amenities are available in Lithuania’s third-largest city and the gateway to the spit on the Baltic Coast, Klaipėda.

6. For the holidays: Tallinn, Estonia 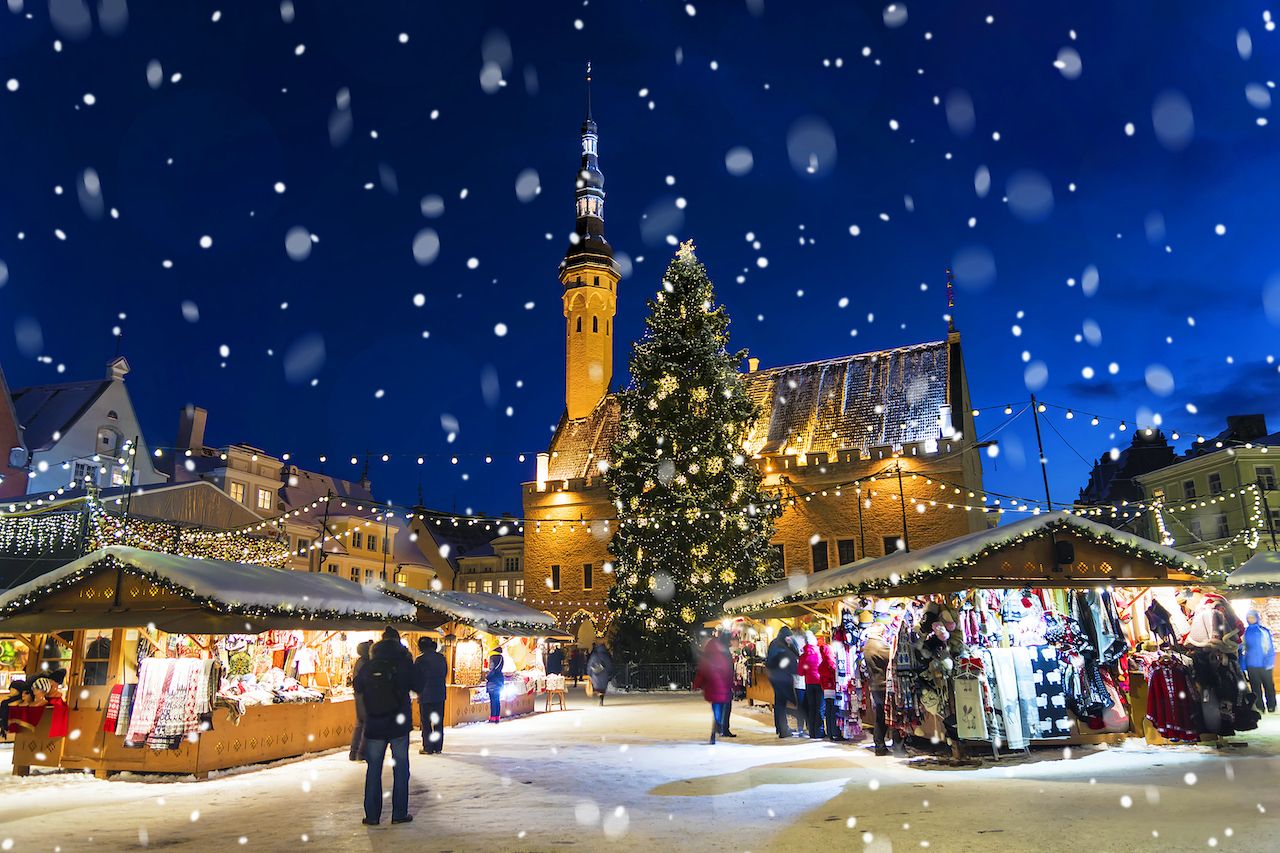 Tallinn’s old town is adorable, and it knows it. Estonia’s main tourist draw, it’s a cute if curated arrangement of pastel-painted shops and restaurants surrounding a main square, many of whose workers flaunt medieval dress up and down the cobbled streets. Lookouts across the city showcase its characteristic red roofscape with steeples and spires rising above. It’s worth seeing any time of year, but whatever gimmickiness Tallinn’s old town gives off in summer transforms with the first snowfall, when sights like the Alexander Nevsky Cathedral and former palace turned Kadriorg Art Museum become utterly enchanting.

The city wears its holiday cheer expertly, with an award-winning Christmas market held every year in the Town Hall Square. There, you can taste warming Baltic foods, peruse stalls for souvenirs, and even say hello to Santa Claus under twinkling lights. For optimal holiday magic, arrive a few days before Christmas as December 25 itself can be quiet in town. 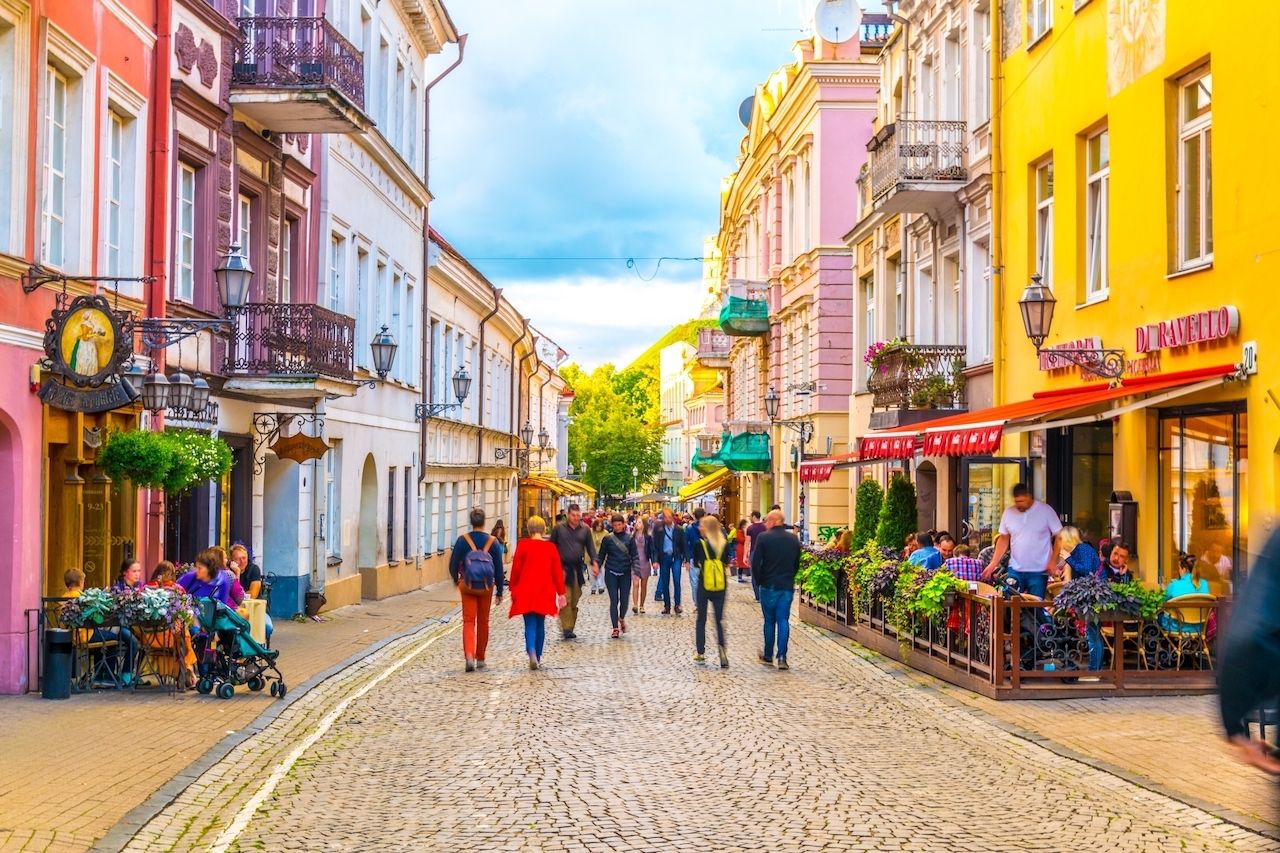 Vilnius is not a bank-breaker like Zurich or Oslo. It’s affordable for most travelers, and many can even afford to splurge in Lithuania’s capital. Luxury-seekers will be happiest in the old town, where five-star hotels like Hotel PACAI and the Grand Hotel Kempinski sit on the main square, rubbing elbows with designer shops and the best restaurants in town. It’s not over-the-top glamorous, but when events like Dinner in the Sky come through to hoist diners into the air and serve them aerial views of Town Hall Square with gourmet food, it certainly feels special. Žvėrynas, a residential neighborhood with a surprising number of chic eateries, is a good choice for a well-appointed yet affordable Airbnb.

Outside the old town, Vilnius is a young, edgy city with plenty of appeal for backpackers and social solo travelers. Bohemian types flock to Užupis, a self-proclaimed independent republic with its very own president, constitution, anthem, and currency. Prices have gone up in the micro-nation since word got out, but it’s still one of the artsiest, most relaxed areas in the city and a great place to meet like-minded types. Elsewhere in Vilnius, cash-strapped travelers can count on finding hostels for $10 per night and filling meals for around $5. 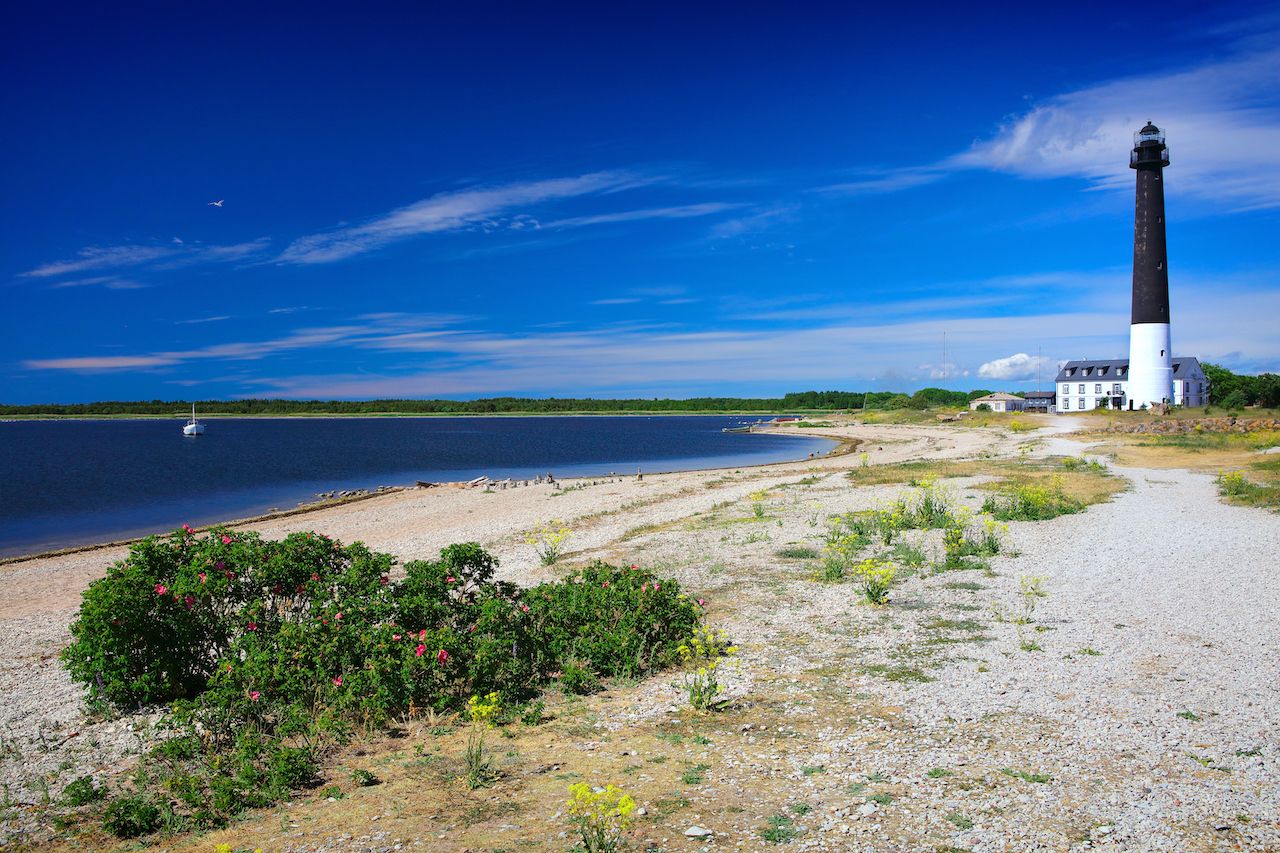 The Baltics may not scream island life, but don’t underestimate Saaremaa, Estonia’s third-largest island. Though it looks more like New England than the Caribbean with its forests, lighthouses, and chilly Baltic Sea waters, Saaremaa can be just as romantic as a tropical paradise. Hotels like the Grand Rose Spa Hotel and George Ots Spa Hotel focus on wellness, often offering treatments specifically for couples. Most of the best accommodations are around Kuressaare, the island’s largest town, where you’ll also find the best restaurants for celebratory meals. When they aren’t getting oiled up and rubbed down on massage tables, couples can lounge on Mändjala Beach or visit Vilsandi National Park. Walks along the coastline are perfect for lovebirds, as are strolls through Kuressaare’s old town and castle complex.

9. For peace, quiet, and countryside castles: Cēsis or Sigulda, Latvia 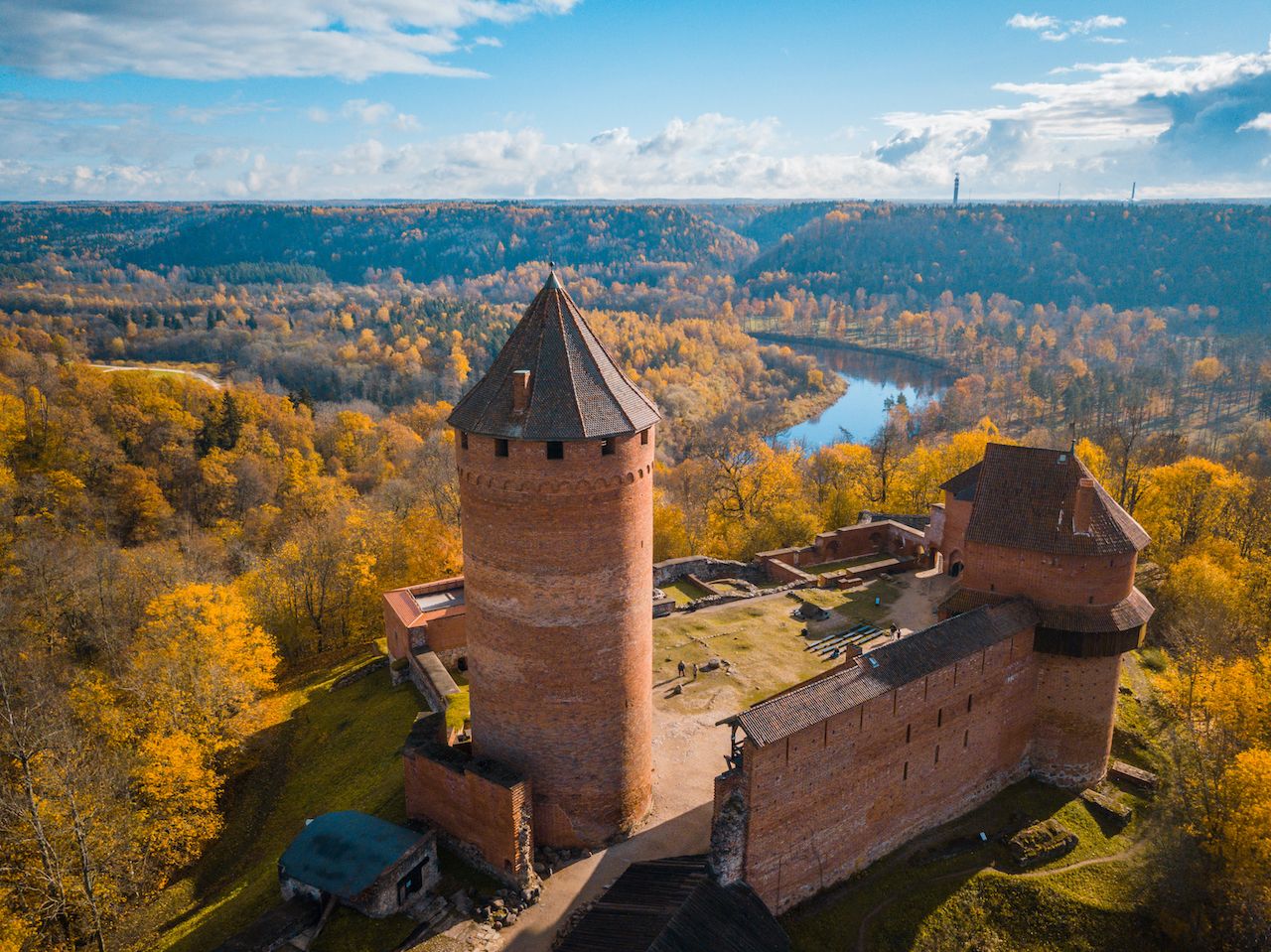 A 13th-century castle built by the Livonian Order sits at the center of Cēsis in northeastern Latvia, reason enough to stick around if you go weak at the knees for architecture. Visitors can tour the dungeon ruins by candlelight before moving on to St. John’s Church, one of the oldest and largest medieval structures in the country. About 30 minutes away, Sigulda similarly centers on a castle erected by the Livonian Order, complete with an equally impressive castle complex. Both towns offer easy access to Gauja National Park, where you can get even farther away from city life with hiking, biking, boating, and even adrenaline sports. 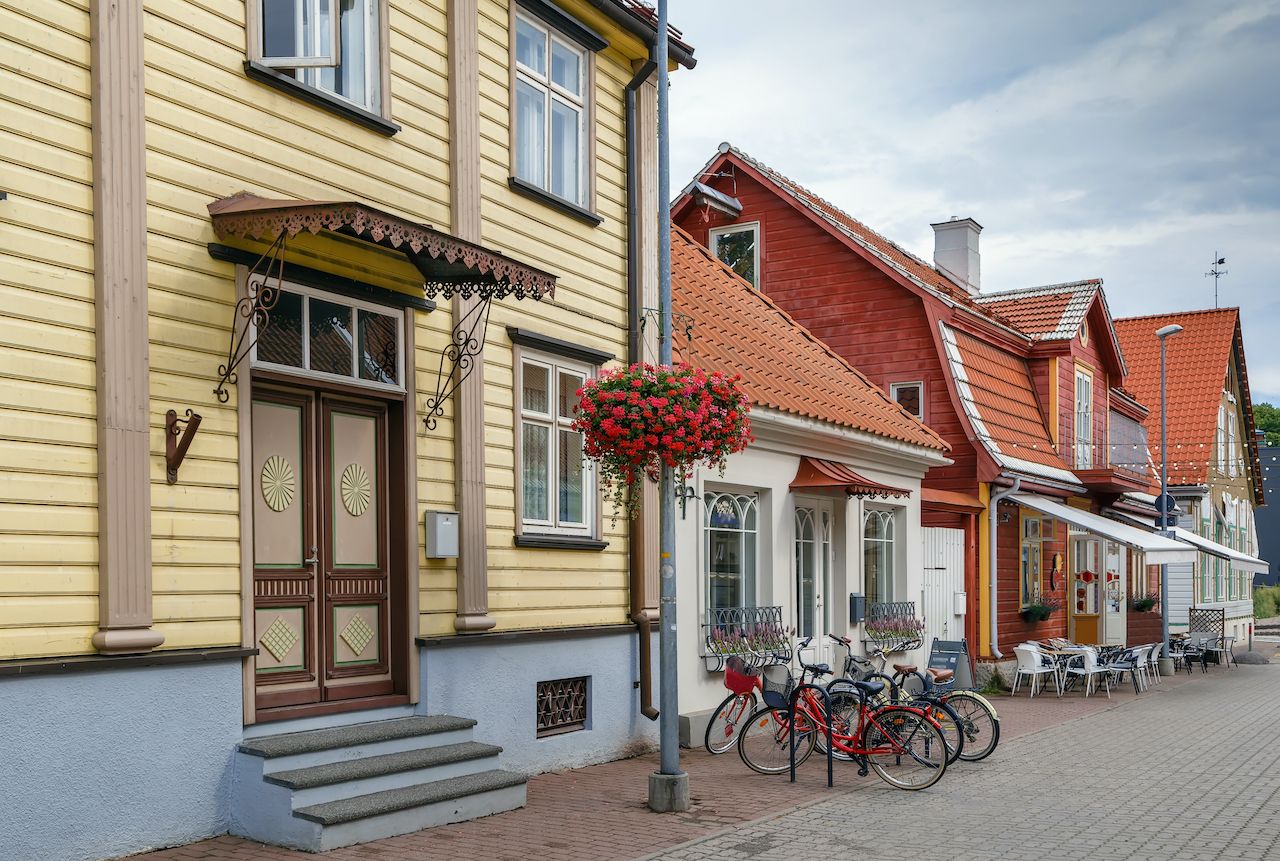 Estonia’s largest resort town, Pärnu revolves around a long, sandy beach that fills up with families and sun-seekers every summer. The water’s shallow and warm enough to wade in when the weather’s nice, but you can also windsurf, SUP, and kayak. You can also bike or rollerblade along the promenade, stopping at small parks and plenty of ice cream stands.

But Pärnu itself is as much a reason to visit as its beach, with a day’s worth of cultural sights, another day’s worth of artisan shops, no shortage of low-key yet yummy restaurants, water parks for the kids, and spas for the adults. It’s a nice blend of energetic and laid-back, a place where families will stay entertained but also get quality time. Better still, families can plan side outings to Soomaa National Park around 40 minutes inland for outdoor excursions ranging from canoeing during summer to snowshoeing during winter.