Narrowing down the ultimate summer camping locales in the United States is no small task. Nominees should be national treasures but not nationwide hot spots, accessible to newly converted campers yet exciting for old pros, easy to reach but not too easy to reach. No one needs reminding that the Great Smoky Mountains are, indeed, great, but plenty of parks have that same wow factor without those 11 million annual visitors. From recreation to bookability, there’s a lot to consider before peak-season camping. That’s why we’ve taken care of the location scouting for you. To find that perfect mix of widely adored and criminally underrated, look no further than these nine dream camping destinations to see what summer in the US is all about. 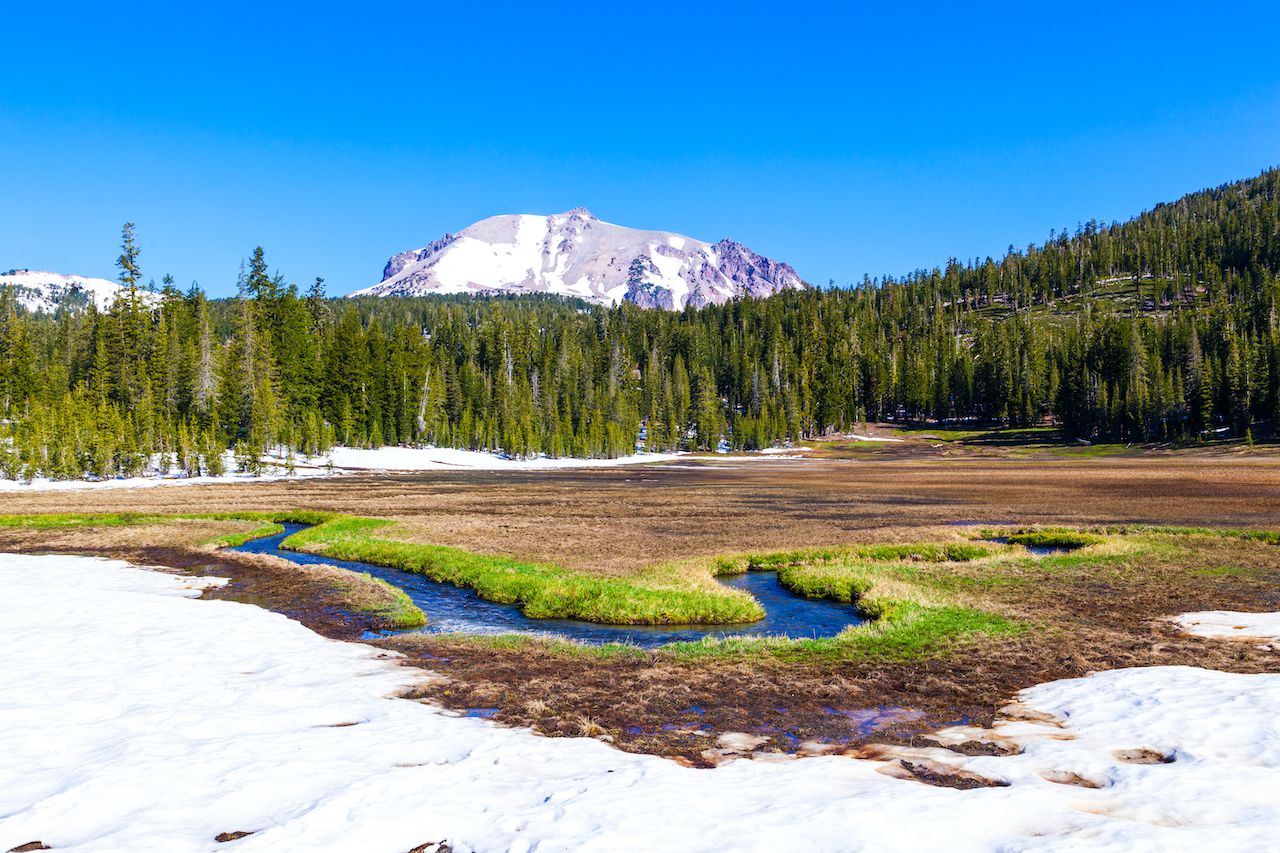 California has more national parks than any other state. Some understandably get more attention than others, but inexplicably, Lassen Volcanic National Park has yet to become a tourist magnet like Yosemite or Joshua Tree.

Hidden inland about four hours northeast of San Francisco, Lassen’s landscape more closely resembles Yellowstone’s than Yosemite’s with its gurgling, steaming, and sulfuric hypothermic areas. The park unfurls around its namesake volcano, Lassen Peak, which takes roughly four hours to hike round-trip. After summiting, hikers can cool off with a dip in one of the park’s strikingly blue and shockingly icy lakes or stroll through flower-filled meadows. For the best of both worlds, many enjoy the 2.4-mile hike to Kings Creek Falls.

When it comes to the actual camping, campers have their pick of sites, whether they prefer developed campgrounds or rustic backcountry. The park’s seven campgrounds are all open from June to September, at least. The largest and most popular one, Manzanita Lake, welcomes guests to its 170 sites at the end of May and closes as the year’s snowfall demands. Both tent and RV campers are welcome. 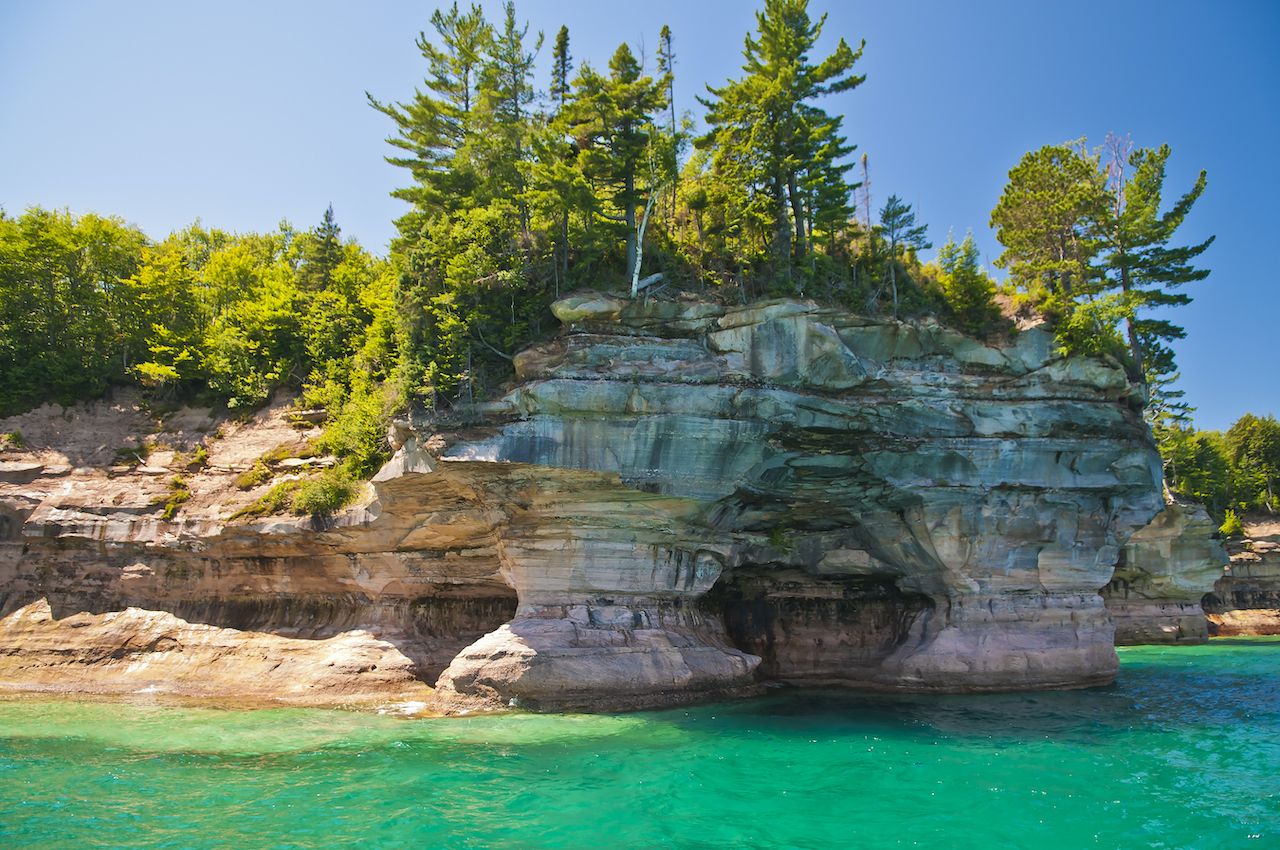 Lake Superior backdrops Pictured Rocks National Lakeshore, with scenery that’s otherwise defined by the mineral-rich sandstone cliffs for which the park is named. Beyond these alluring crags, visitors are treated to rivers, waterfalls, beaches, sand dunes, and shipwrecks nearly as captivating as the lakefront’s colorful formations.

Three drive-in campsites make overnighting here easy. Twelvemile Beach is the largest of them with 36 sites. All are equipped with picnic tables, pit toilets, and firepits outfitted with grill grates, and two are wheelchair accessible. Hurricane River is the second-largest, with 21 campsites total and easy access to the Au Sable lighthouse and nearby shipwrecks.

When you’re not at camp, spend your days snorkeling, scuba diving, kayaking, boating, fishing, of hiking. You can take interpretive walks along the North Country and White Birth trails, the latter of which winds up at Twelvemile Beach’s campground. Best of all, pets are welcome, so even your furry friend can get in on the summer fun. 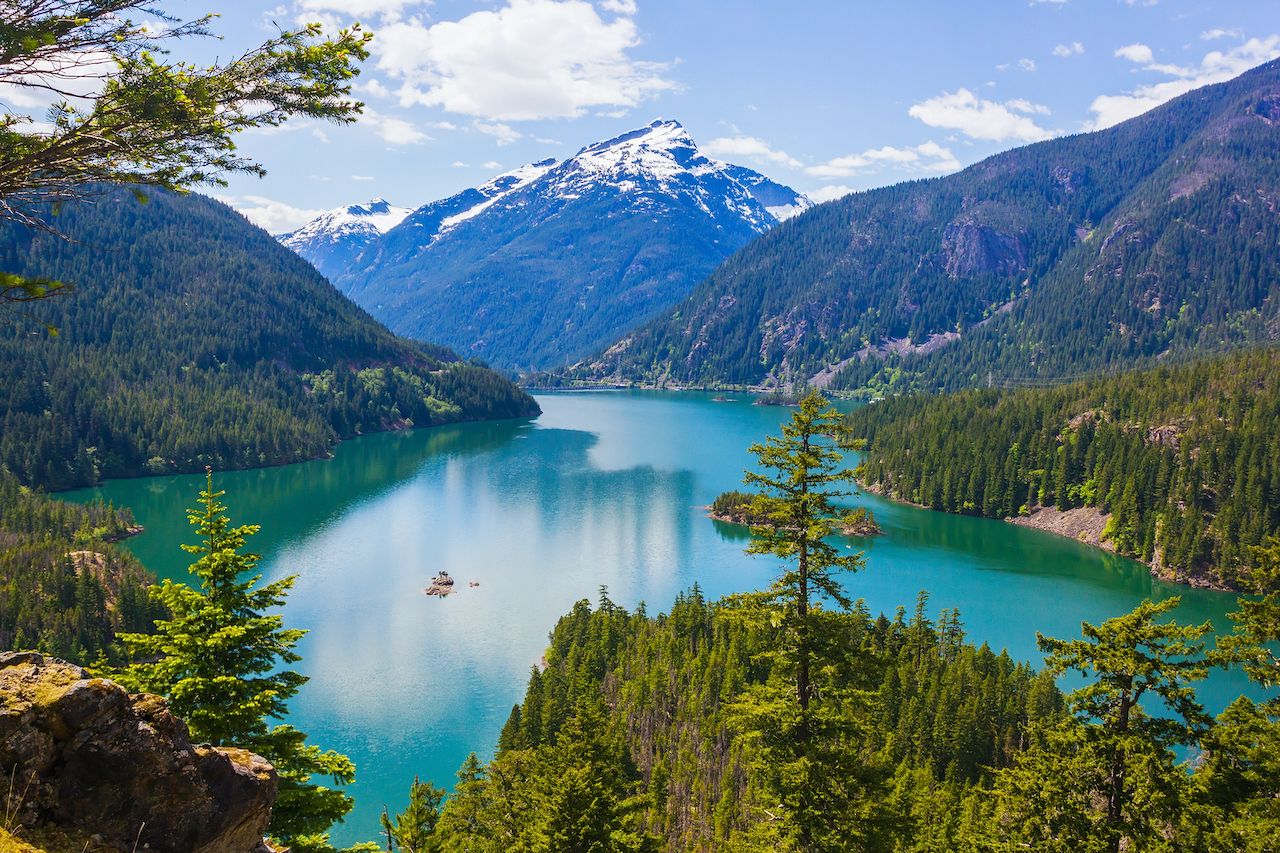 Washington state is known for having some of the country’s most epic wilderness, yet relatively few people realize the wonders of North Cascades National Park. Roughly two hours outside of Seattle, this northwestern wilderness area extends to the Canadian border to the north and includes both the Lake Chelan and Ross Lake national recreation areas.

Some call the range for which this park is named the North American Alps, owing to its elevated lakes and some 300 glaciers, irresistible evergreens, and fresh alpine air. The car campground at Colonial Creek is an excellent choice for families or groups of eight or fewer during summer, though North Cascades also gives out backcountry permits and has boat- and bike-in campsites. 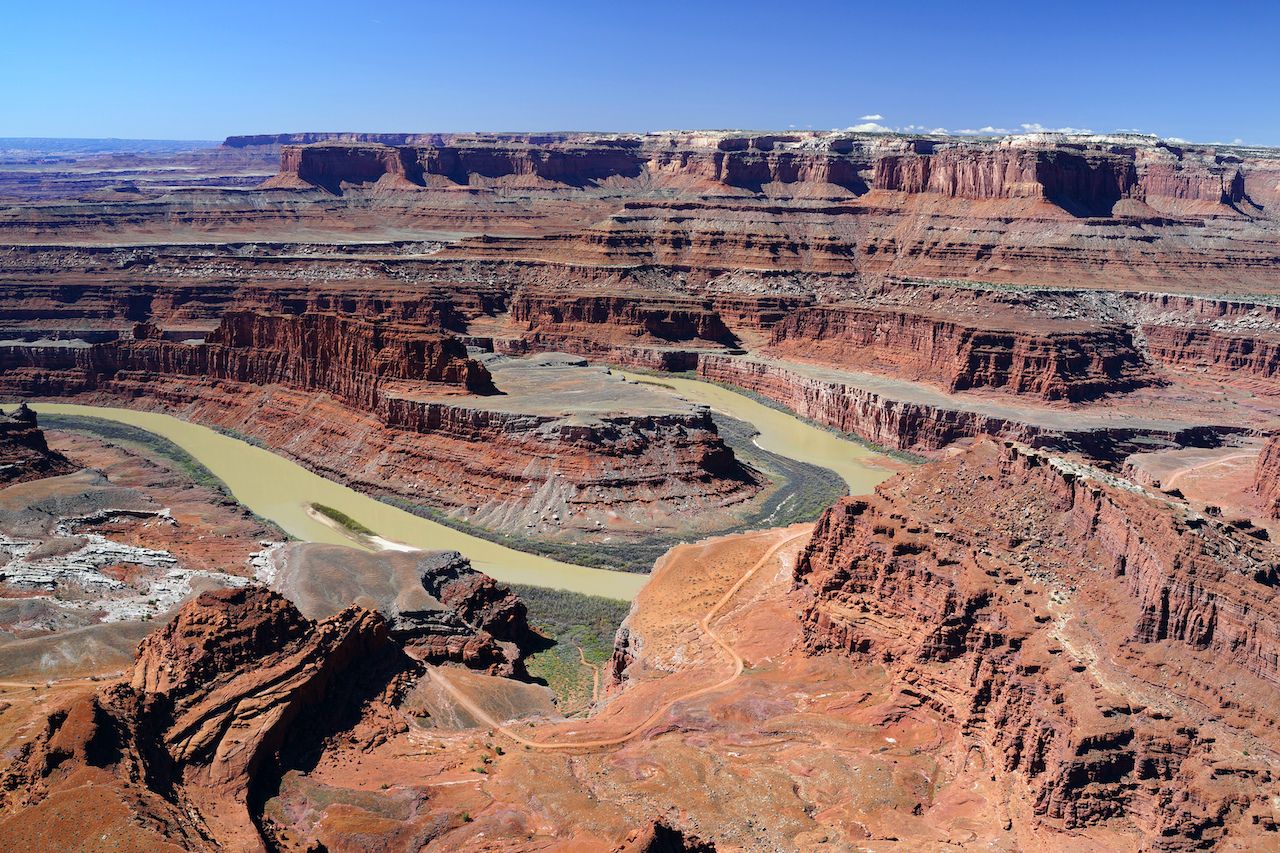 If you think you can withstand Moab’s scorching summer temperatures, it’s hard to beat the desert camping at Dead Horse State Park. With all the views of Canyonlands and Arches national parks but a fraction of the crowds, this state-protected slice of Utah wilderness lets visitors gaze down some 2,000 feet at the Colorado River from vantage points along the West Rim Trail and other red-rock-backed trekking and singletrack paths.

If you visit in summer, we recommend securing one of the 21 campsites at the Kayenta Campground, which has luxuries like modern restrooms and provides plenty of shade to keep tent campers comfortable. RVs are also welcome to plug into the campground’s electrical hookups. While everyone will enjoy Kayenta’s proximity to the park’s most popular trail and points of interest, newer campers may also appreciate being able to pop over to the visitor center to get the lay of the land or even a cup of coffee from the on-site food truck.

The brand-new and even bigger Wingate Campground is another option, with 31 total campsites that can accommodate a mix of RVs, tents, and dispersed campers. For the glamping inclined, Wingate has four yurts with electricity, air conditioning and heaters, barbecues, and bunk or futon beds that can hold up to six guests. Another five are located in the Moenkopi yurt area. 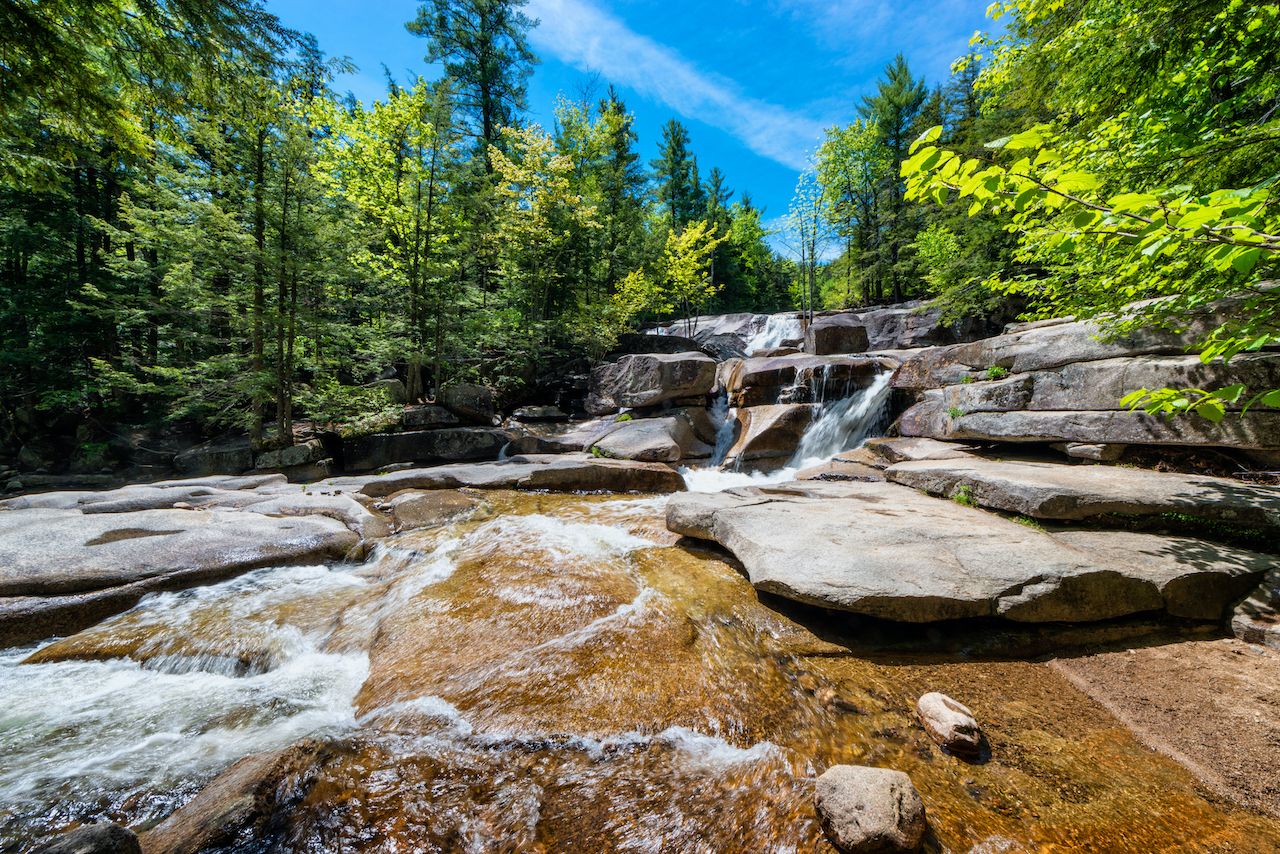 Outdoorsy East Coasters may want to find their way to New Hampshire, or Maine, come summer. White Mountain National Forest blankets 800,000 or so acres between the two states, representing one of just two national forests in all of New England and the only national forest in either of its host states. Some are drawn to the park as a stop on the Appalachian Trail, meaning the campgrounds can fill up. Yet a high number of visitors prefer to come during the leaf-peeping season instead, so summer campers still have a shot.

More than 20 drive-in campsites are spread across the park, most of which cost a moderate $16-25 a night and come with minimal amenities. Reserve a spot at one of the Dolly Copp Campground’s 177 sites to be close to the modest visitor center and many of the most hiked trailheads. Roll up in your RV if you want, or take the opposite approach by taking to the backcountry. Dispersed camping is free, and permits are not required for primitive campers. 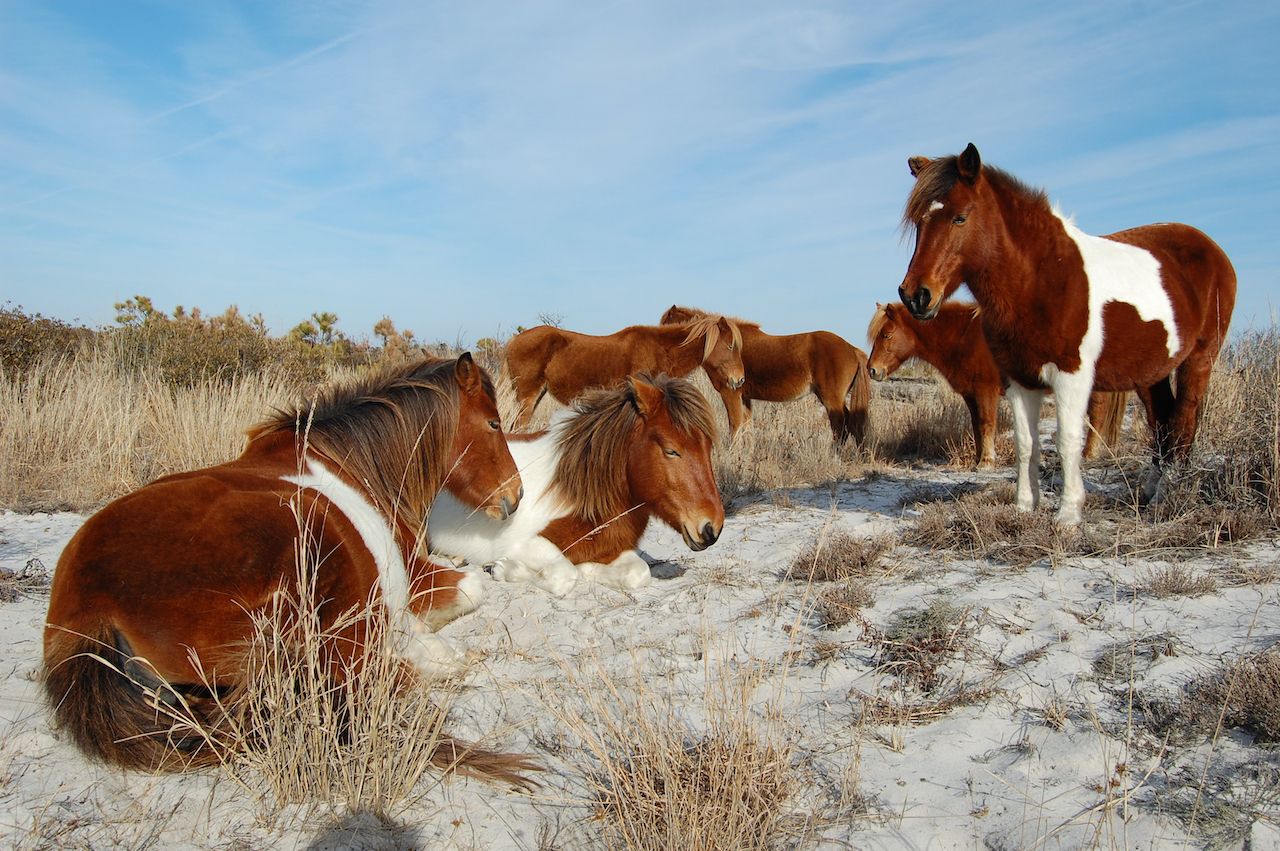 Split between Maryland and Virginia, Assateague Island National Seashore may be a harder spot to secure a last-minute campsite than the other parks on this list. Camping is only possible on the Maryland side with reservations bookable six months in advance. And, between the island’s wild horses and irresistible beachfront real estate, summer spots usually do fill up that far out. If you do manage to reserve a campsite, however, you may never want to leave.

Both walk-in and drive-in sites are available for a relatively steep $30 per night. Intrepid types can opt to hike or paddle into the backcountry instead, choosing between oceanside and bayside campsites. Permits are required and cost $10 per person per week. Wherever you end up resting your head in the evenings, prepare to spend your days skirting the shore alongside the island’s resident horses, looking to the skies to see soaring birdlife, exploring coastal wetlands and marine forests, trying your hand at clamming, plying the waters on a kayak, and much more. 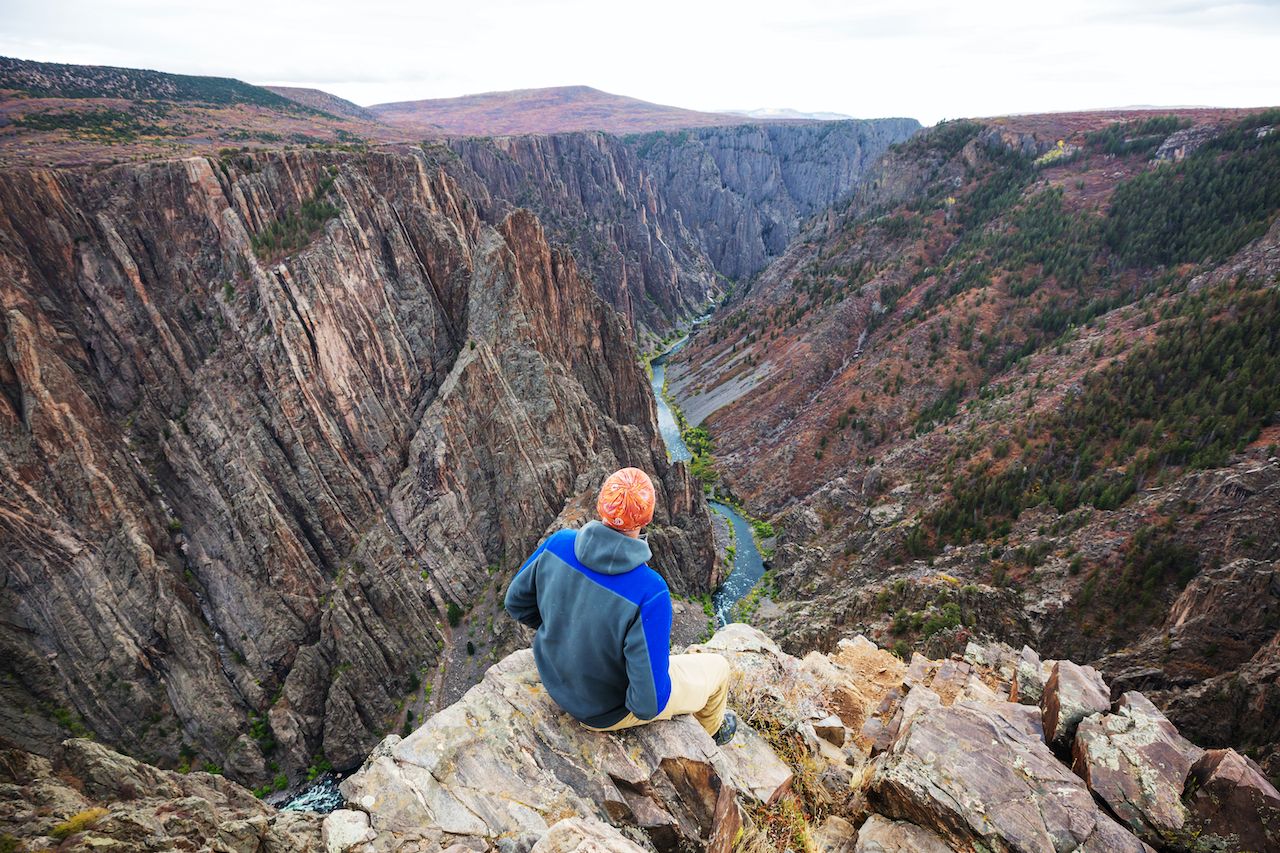 Most Coloradans would probably not survive a summer without at least one camping trip. While options are aplenty, this local favorite near Crested Butte is up there with the best of them. One-third of the Grand Mesa, Uncompahgre, and Gunnison National Forest, or GMUG, the park is home to seven smaller designated areas, including a sliver of the renowned Maroon Bells-Snowmass Wilderness that it shares with the neighboring White River National Forest.

Campsites here run the gamut from cabin-equipped to dispersed-approved, with plenty of developed sites for the average camper to enjoy. Many beeline for the Black Canyon of the Gunnison National Forest, which are serviced by the North and South Rim campgrounds among others. The first 56 sites of South Rim’s A and B loops can be reserved during summer, which we highly recommended. Note that, at 8,000 feet, the site can be windy year-round. 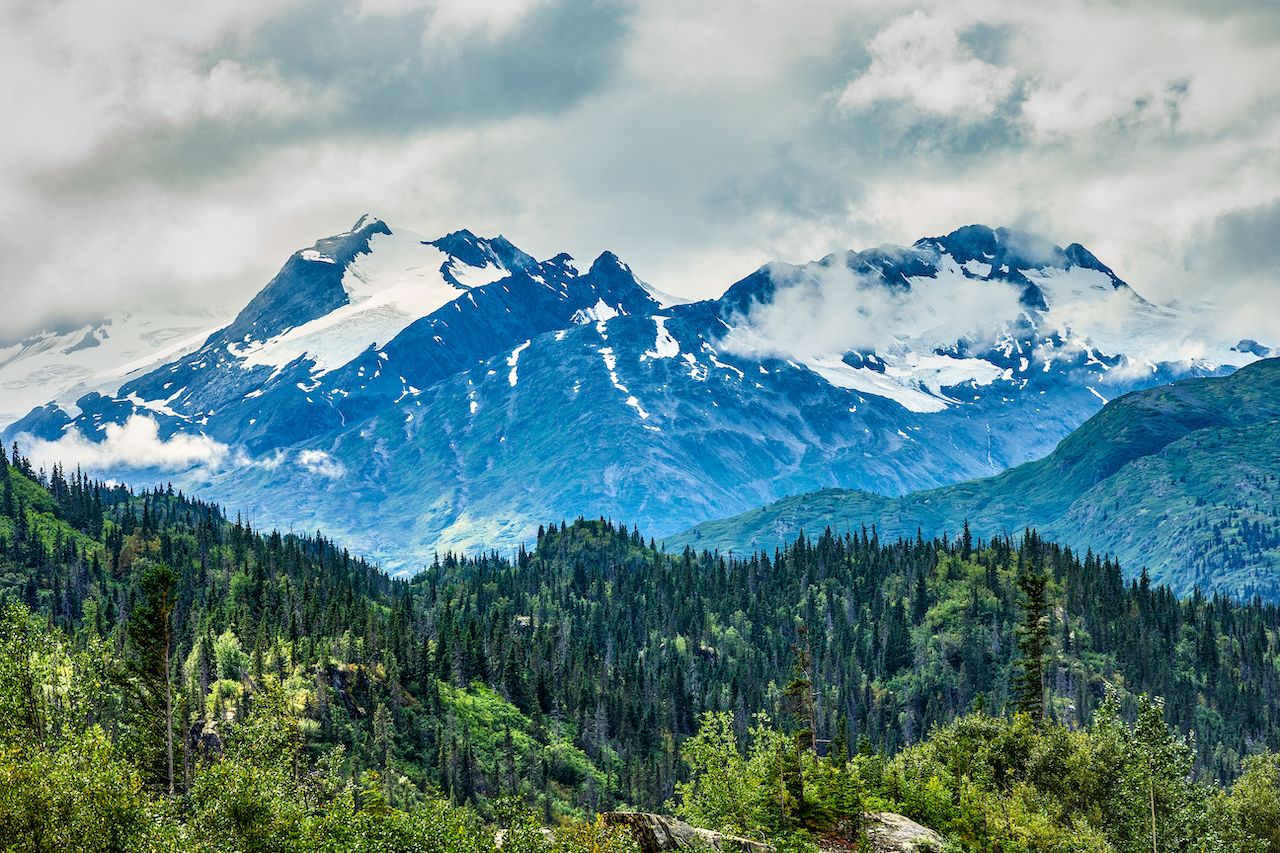 Alaska’s a long way away for residents of any other state, but for campers, Chugach National Forest is worth traveling to. And of all the parks in Alaska, it’s the easiest to actually get to once you’ve arrived in the 49th state. Located largely within the municipality of Anchorage, fewer than 10 miles from downtown, Chugach opens to a world of outdoor adventure: hiking and mountain biking on 280-plus miles of trails, spotting wildlife like black and brown bears, kayaking among the glaciers of Prince William Sound, and possibly even fishing or hunting.

Endless recreation is available year-round, which is not exactly surprising given the park’s nearly half-a-million acres, yet summer sees the most manageable temperatures, averaging between 40 and 50 degrees Fahrenheit in July. There are several campsites along the Eastern Kenai Peninsula where the forest is located. Eklutna Lake is a solid choice, with 50 campsites and all the basic amenities. Cabin rentals and dispersed camping are also possible. 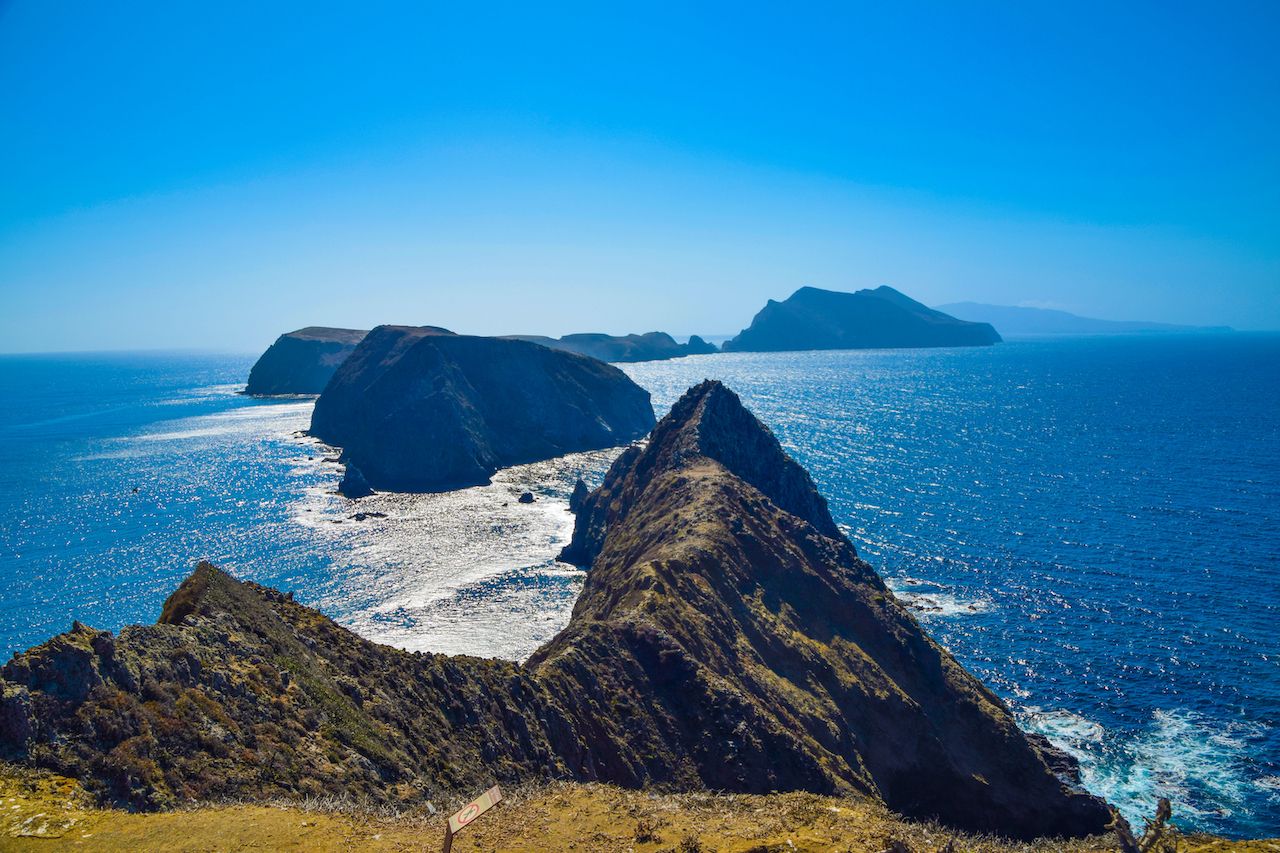 Eight Channel Islands lie off the coast of Southern California. Five of these comprise Channel Islands National Park, and none have become tourist magnets like so much of the state’s precious wilderness. Nicknamed the Galapagos of California for its myriad endemic flora and marine life, as well as its fair share of impressive land mammals, Channel Islands makes for an excellent summer camping destination. Visitors can hike and kayak, go whale watching and sea caving, swim, snorkel, and, of course, set up camp on any of the park’s five islands.

Campsites are rugged, primarily reachable by concessionaire boat, and must be reserved in advance. They’re open year-round, but summer in the Channel Islands is something special. And, unlike so many of California’s nature escapes, it’s surprisingly available. Arguably the most accessible and least exposed to the elements, the Santa Cruz Scorpion Campground has 25 individual and six group sites that require only a short hike to get to from the pier. Expect running water and incredible sea views but not much else in the way of amenities.

CampingHow To Secure a Great Last-Minute Campsite
Tagged
Camping United States
What did you think of this story?
Meh
Good
Awesome