Seeing the northern lights is a such an important bucket list item that many plan entire trips to northerly latitudes to witness them. And while the majestic celestial phenomenon certainly deserves the hype, it tends to overshadow the southern lights, who don’t quite get the same star treatment.

The scarcity of land close enough to the South Pole in the southern hemisphere makes the aurora australis more difficult to see, but that’s what makes getting a glimpse of this beautiful light show even more special. Here are the five best spots in the world where travelers can get a great view of the elusive southern lights. 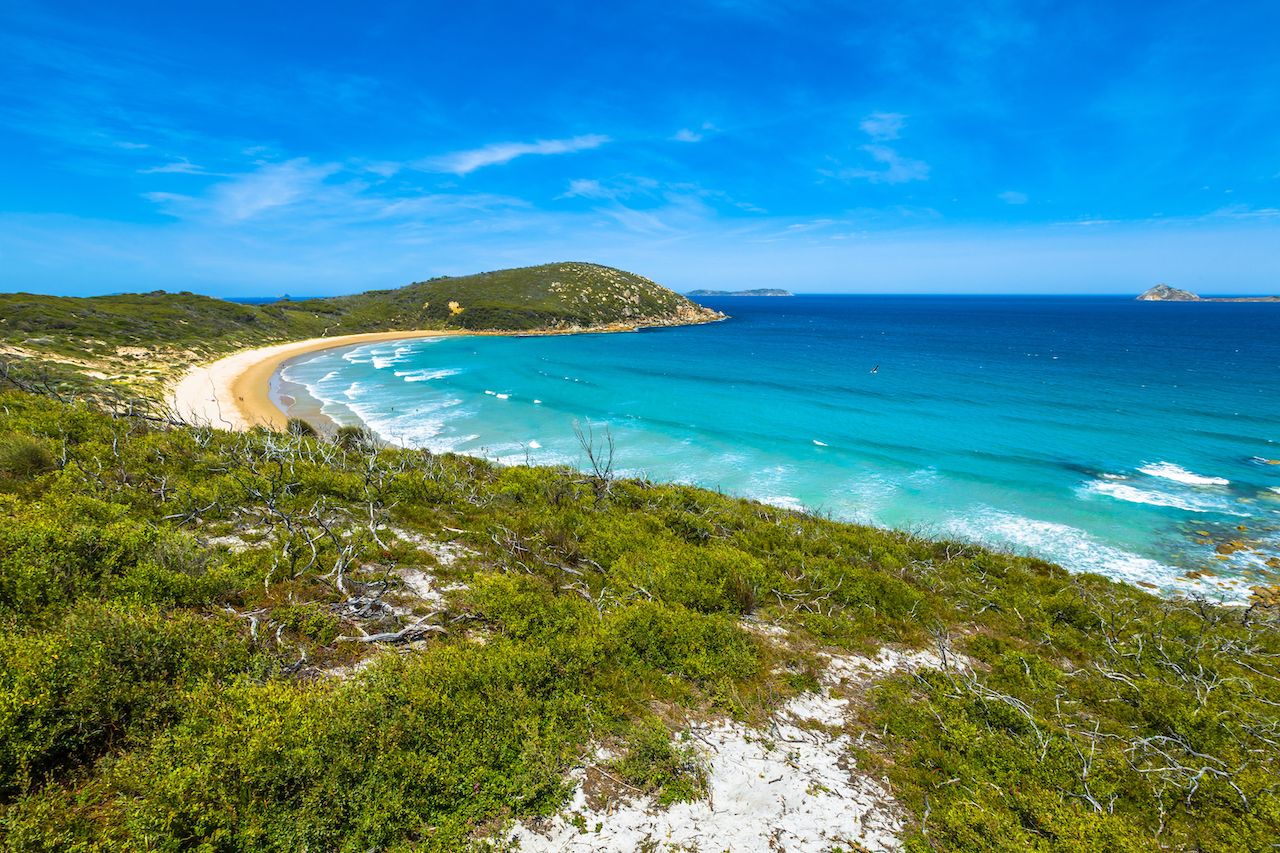 One of the best places to see the aurora australis is in Australia, but you actually have to go to the southernmost part of the mainland to get the absolute best view. A three-hour drive from Melbourne, Wilsons Promontory National Park and Wilsons Promontory Marine Park have no shortage of daytime adventures, but the real magic starts when night falls. With a pitch-black sky miles away from any light pollution, Wilsons Promontory offers one of the most unobscured views of the southern lights in the world. Set up camp under the stars for a truly rustic experience, or stay in one of the park’s many wilderness lodges. 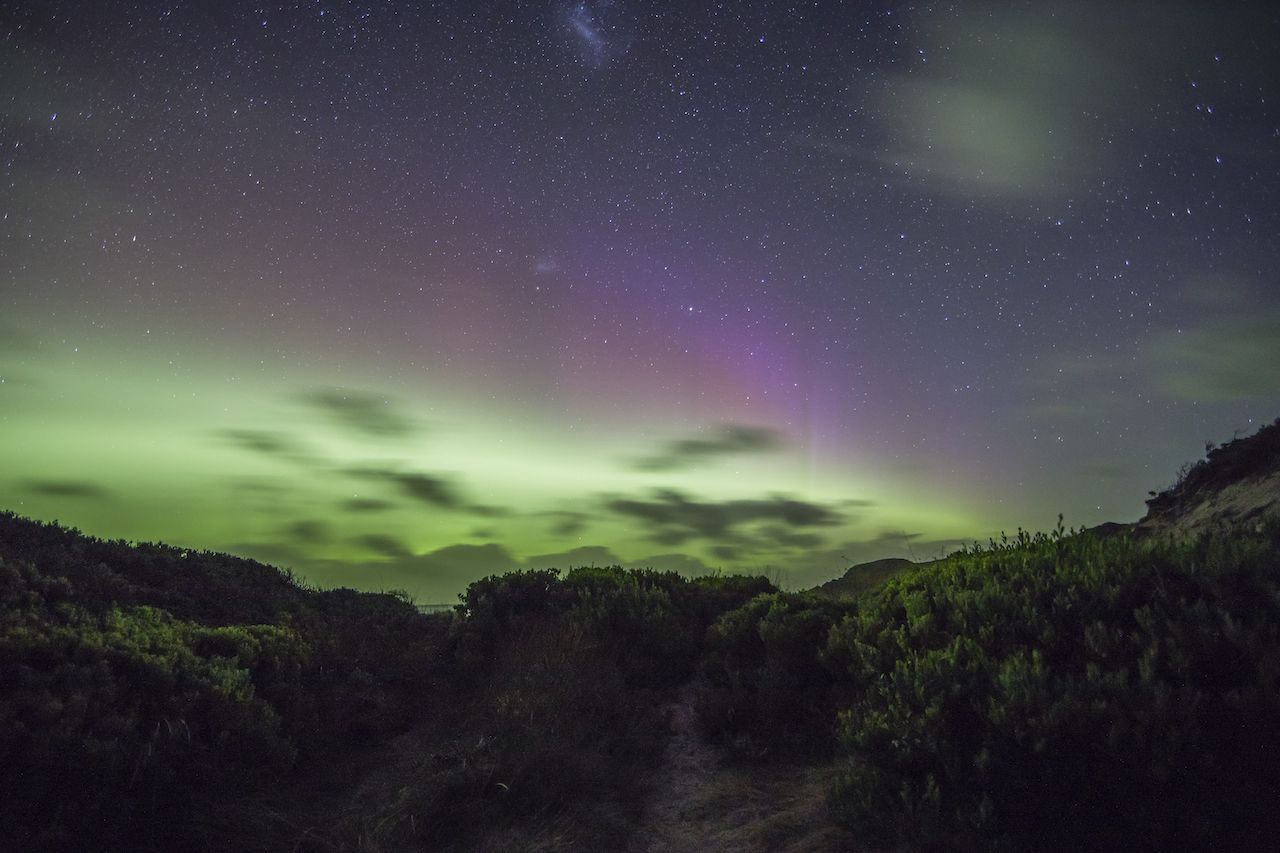 The island of Tasmania, about 316 miles south of Melbourne, is the only place in the world where you can see the aurora year-round. Because of its latitude and more moderate daylight and seasonal changes than other southerly stargazing destination, it’s one of the most unique dark-sky regions on earth, and perfect for spotting the aurora australis regardless of what time of year you visit.

That said, simply being in Tasmania isn’t enough. You still have to find the right viewpoint. As the southernmost point in Tasmania — and therefore, Australia — Cockle Creek is an ideal viewing spot. Just a two-hour drive from the capital of Hobart, you won’t find any shops or restaurants in Cockle Creek, but you will find a campground, a stunning national park, and truly dark skies. And you if you don’t feel like making the drive back to Hobart at 2:00 AM, there are accommodations conveniently located in nearby Ida Bay. 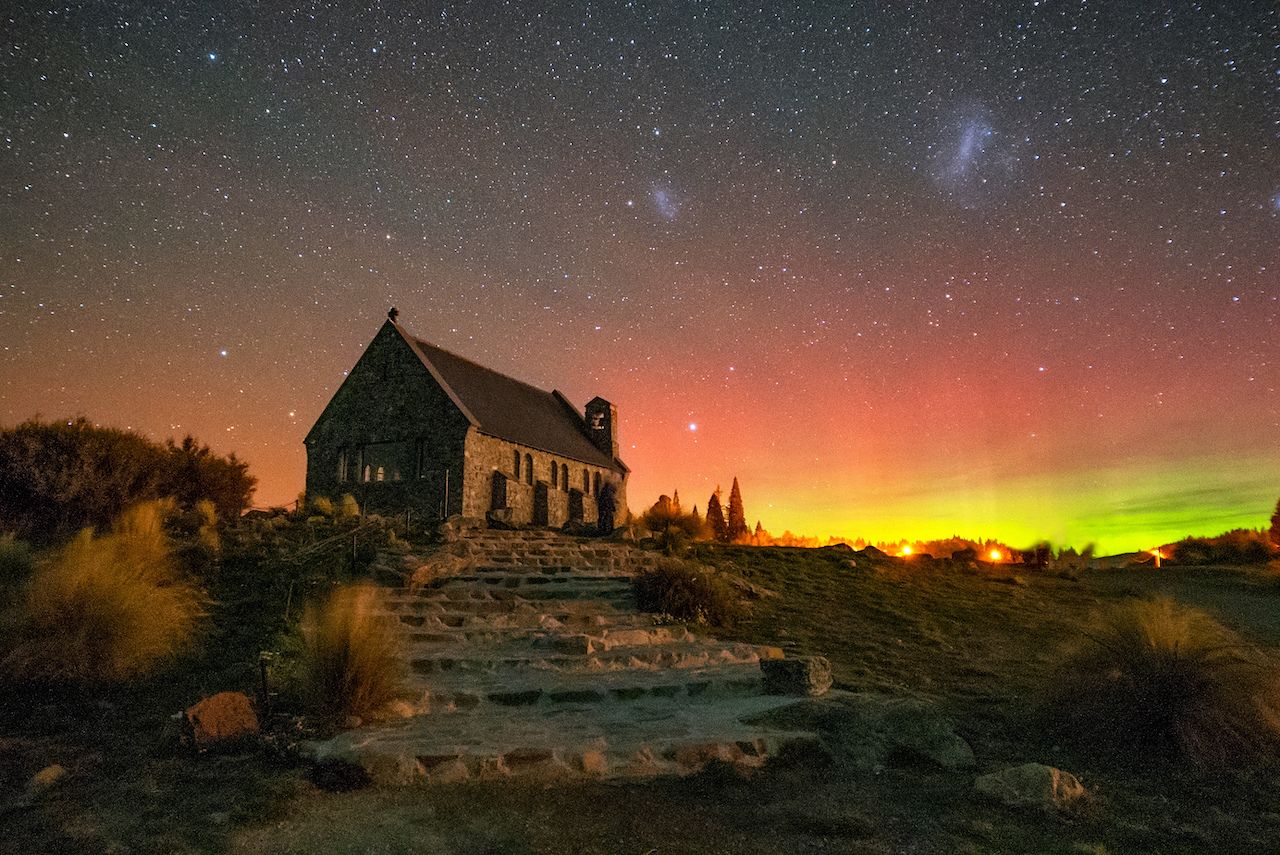 New Zealand’s South Island has some of the country’s darkest skies, and is therefore one of the best spots in the world for southern lights viewing. Viewpoints across the South Island are fairly spread out, however, so you’ll probably want to choose one and stick with it. And if you’re going to put all your eggs in one basket, it might as well be the largest dark-sky reserve in the world.

Aoraki Mackenzie International Dark Sky Reserve is massive, with multiple areas conducive to dark-sky viewing. If you don’t mind working a bit for your view, hike to the top of Mount John, located within the Lake Tekapo area. There’s a reason this place is home to the Mount John Observatory, and one of the largest telescopes in New Zealand. From here, you will have a clear and totally unobstructed view of the southern lights, and can even take a guided tour of the observatory for a chance to watch the sky through a powerful telescope. You can also check out the Aoraki Mount Cook National Park, located within the reserve, for an alpine environment completely devoid of light pollution. 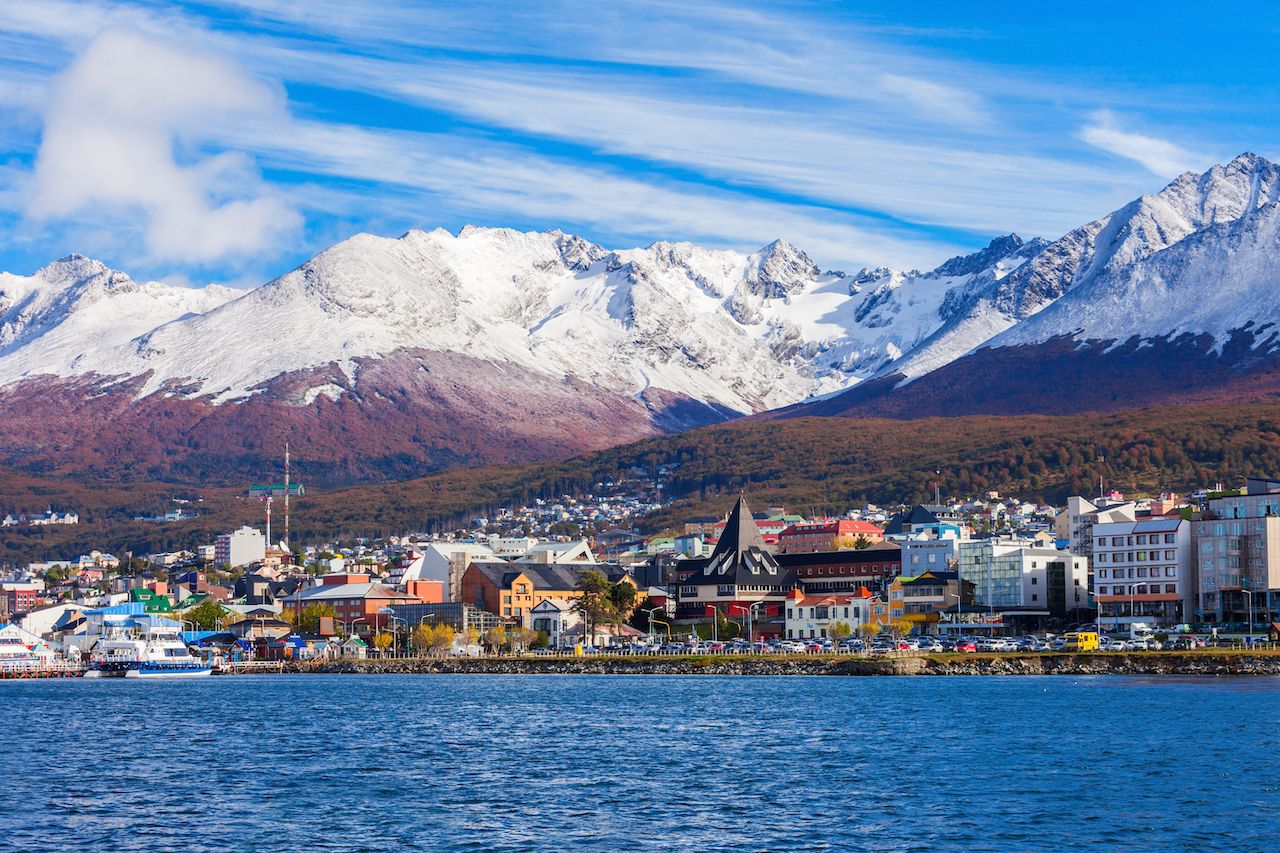 Ushuaia is perhaps best known as a necessary stop-off point before venturing to Antarctica, but savvy stargazers know that it’s a destination in itself. As the southernmost city in the world on the coastal tip of Argentina, Ushuaia is the premier southern lights destination in South America. And although the dark winter days may sound dreary, they’re ideal for seeing celestial lights, as Ushuaia gets 17 hours of darkness per day during the winter months.

Although it might sound like one of the world’s most far-flung destinations, Ushuaia has its own airport and is incredibly accessible from the rest of South America. That said, you’ll still have to rent a car and drive out of town so your view is unobstructed by light pollution. And as always, hope for clear skies. Ushuaia is famous for its cloudy, unpredictable weather, so you’ll need a bit of luck to see the lights clearly. 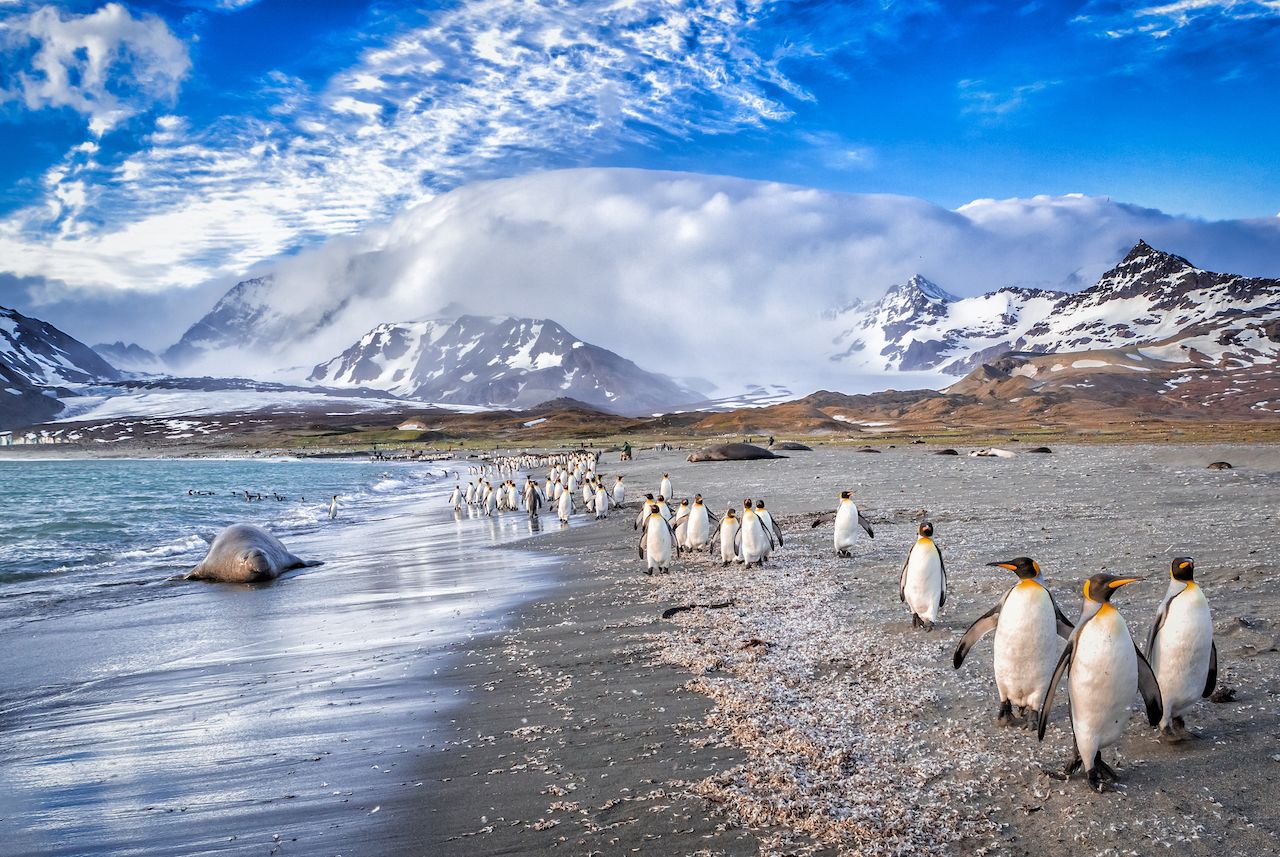 South Georgia Island is among the most remote dark-sky viewing destinations in the world. Over 400 miles from the eastern coast of South America, there are less than 100 people living on South Georgia Island — a small staff of scientists — and around 450,000 pairs of king penguins, who get those dark skies all to themselves. The only way to access the island is via boat (many cruises will take you there), with March being the best time to see the southern lights.

AstronomyThe 6 Most Epic and Unique Ways To See the Northern Lights
Tagged
Astronomy Insider Guides
What did you think of this story?
Meh
Good
Awesome