Just because summer’s over, it doesn’t mean you can’t still go on an epic fishing trip. Fishing isn’t just about blue lakes, clear skies, and soaking up the sun in your boat. For many, winter is the real fishing season, and it’s easy to see why. Venturing out to a frozen lake, bundled in your warmest gear, and dangling a line through several inches of ice can be pretty thrilling. Since a snowy backdrop and thick boots might not feature in your typical fishing fantasies, however, it’s easy to forget that ice fishing is actually more than just a sport — it’s an adventure. Here are some of the best places in the world to go ice fishing. 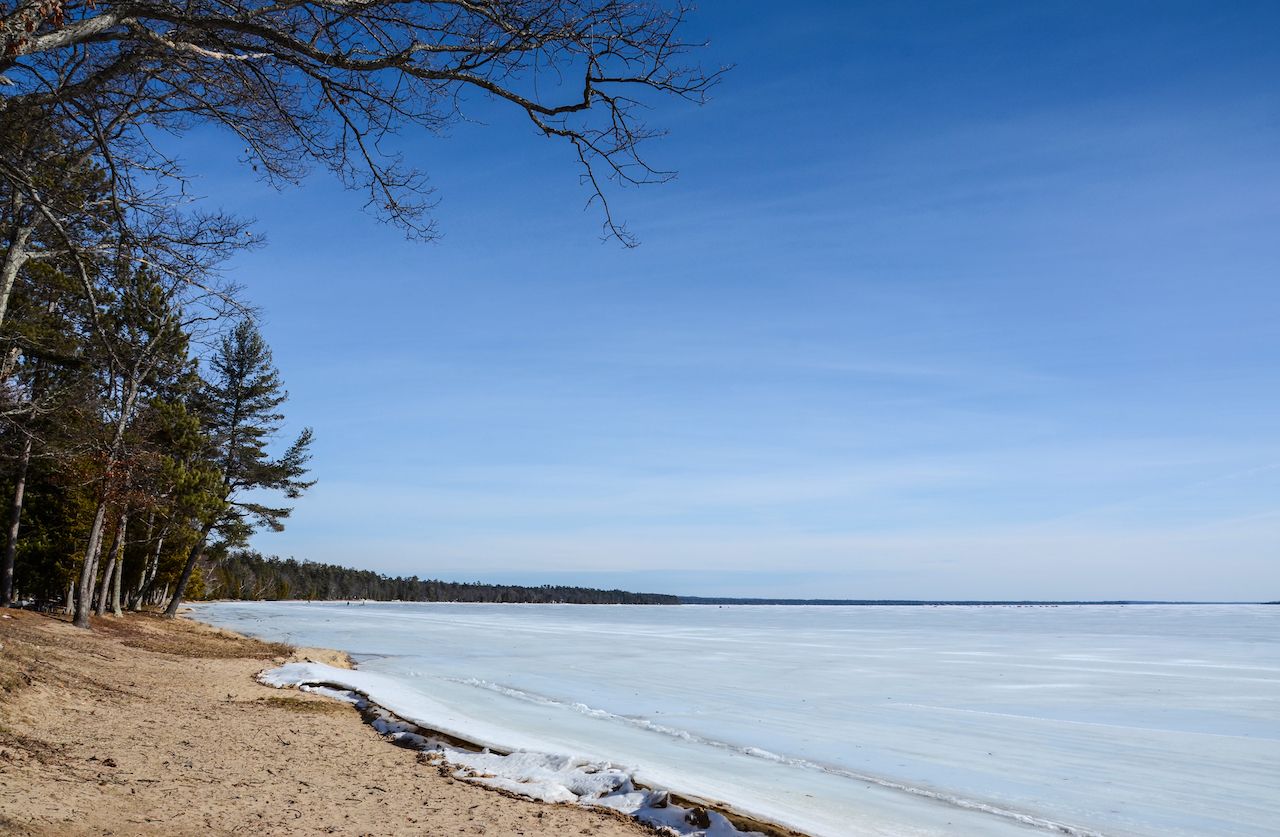 When you imagine fishing in Michigan, you probably think of the enormous Lake Michigan. But this inland lake, about two hours north of Lansing, is an ice fisherman’s dream and more manageable than any of the Great Lakes. Higgins Lake’s deep waters are home to a host of different fish, even in the coldest weather. You’ll find perch in great numbers closer to the shore, and you’ll likely spot trout near the center, but there are tons of other species to catch as well. Since the lake is so deep, however, it takes longer to freeze over, so you’ll generally want to wait until the January to venture here.

This massive lake in North Dakota is famous for the size and variety of the fish that can be caught here. It’s a prime location for trophy perch, walleye, and pike, and as you’ll soon notice, they’re pretty hefty. A large freshwater shrimp population means some pretty fat fish. The lake is also great for getting away from the crowds with over 180,000 acres to explore. Don’t let the size intimidate you, though. There are tons of bait shops and maps, and experienced guides are available if you don’t want to go it alone. Lodging is convenient here as well, with several hotels catering to anglers. 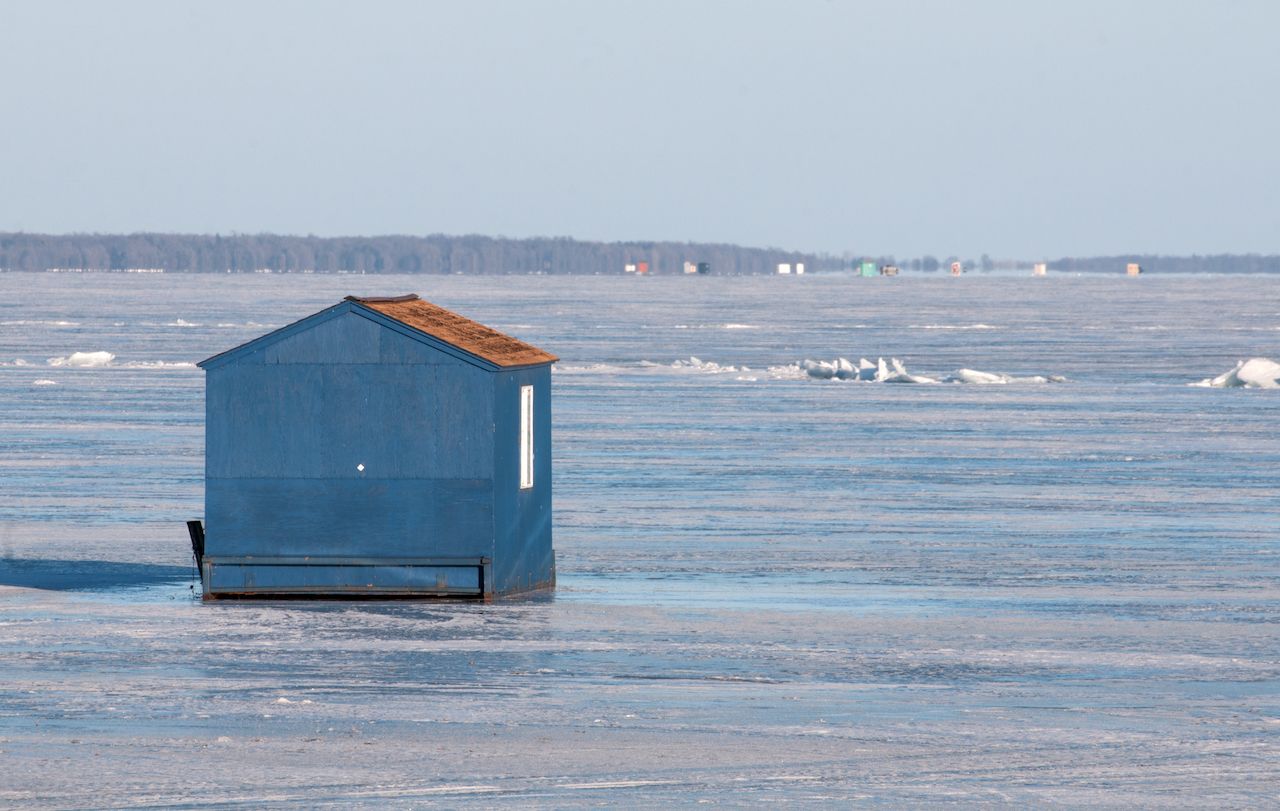 Widely considered one of the world’s best ice fishing locations, Lake of the Woods is situated right on the border between the United States and Canada, making it easily accessible to citizens of both countries. After the Great Lakes, it’s the largest freshwater lake in the US, and it’s famous for its high populations of walleye, northern pike, perch, whitefish, lake trout, and more. Plenty of fish houses are available throughout the lake, and they’re constantly being moved in accordance with where the fish are that day. Guides also regularly patrol the ice, helping visitors track schools of fish across the lake and choose the ideal spot to drop their lines. On the Minnesota side of the lake, you can stay at the Border View Lodge, which supplies guests with private fish houses, guides, and even heated porta-potties on the ice. 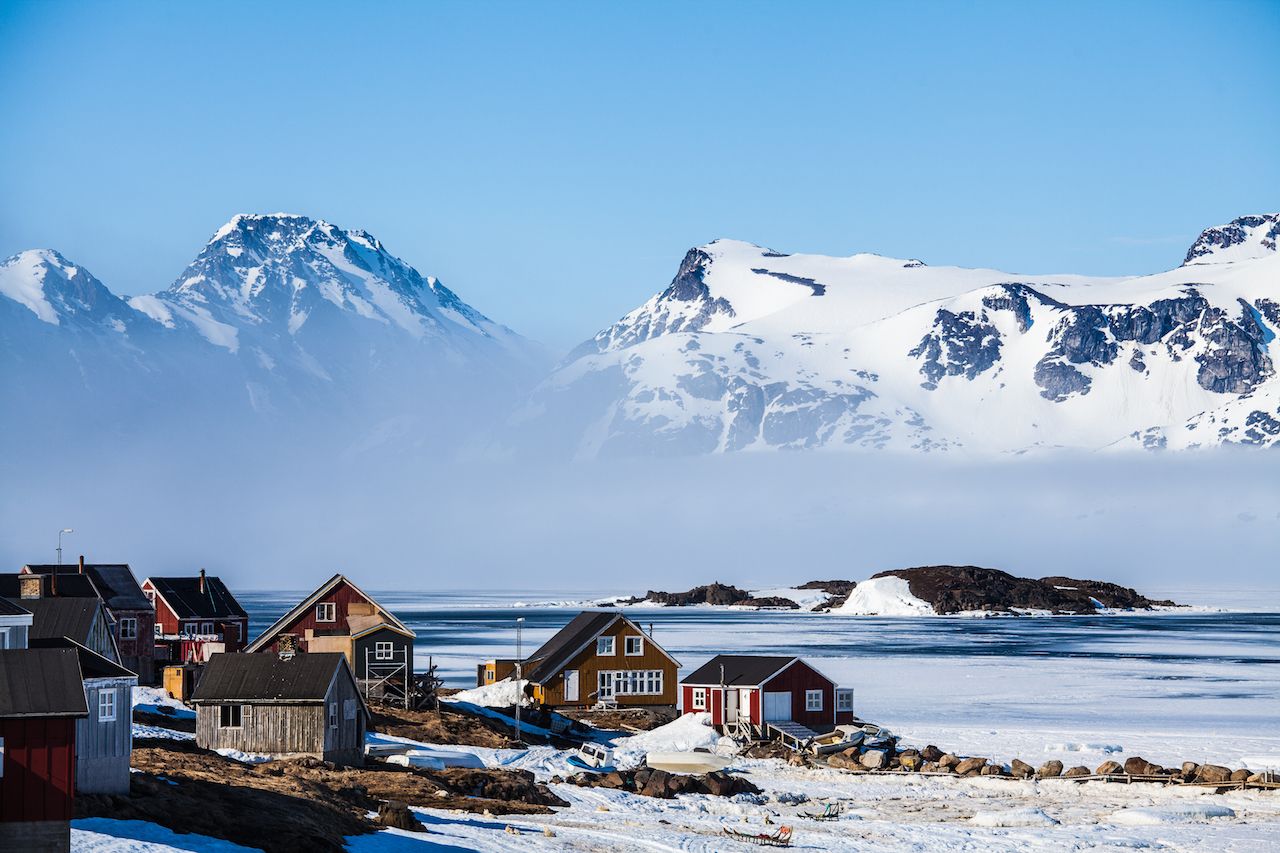 This might be the perfect excuse to go ice fishing and see the fjords all in one trip. Here, you’ll feel truly at one with nature as Ammassalik is one of the world’s most remote ice fishing destinations. A trip to these fjords in eastern Greenland will truly thrust you into the heart of the wilderness. Apart from the fact that you’ll probably be accessing the region by dogsled, you also won’t be fishing for any ordinary game. These fjords are home to the famous Greenland shark, which can weigh up to 440 pounds, and halibut weighing as much as 110 pounds. The easiest way to get there is via guided tour, which usually includes an array of Arctic excursions in addition to ice fishing instruction. 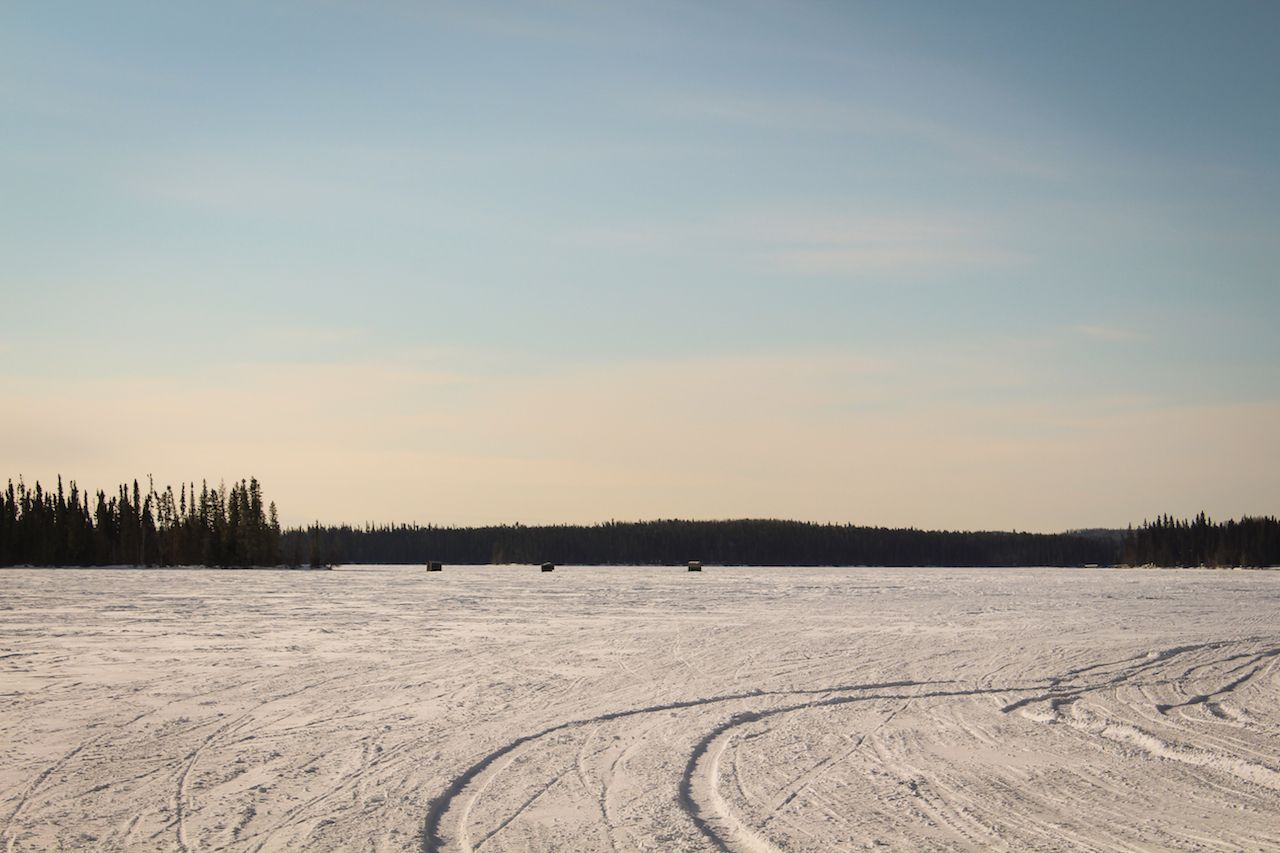 Lake Diefenbaker, which spans 145 miles, is famous in Saskatchewan, Canada, for its number of prime fishing spots and diversity of fish. In addition to walleye, there are both rainbow and lake trout, as well as pike, burbot, and sturgeon. The lake is particularly good for catching walleye, though you’ll want to visit at night to have your best shot. It’s also a great spot for trophy fishing with trout here having been known to exceed 10 pounds. Peak season generally occurs in January and February, so plan your trip accordingly. 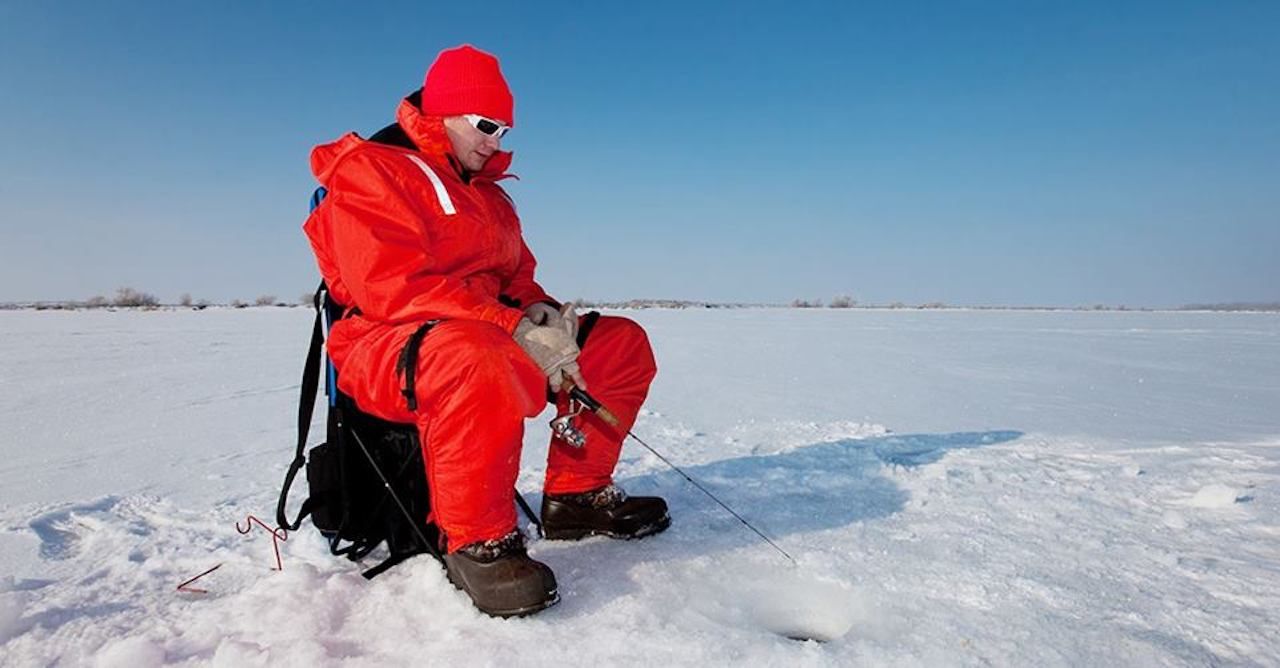 Located about 100 miles from Denver, Antero Reservoir is known mostly for its diverse population of trout, including large rainbow trout. Also calling the reservoir home are snake river cutthroat, greenback cutthroat, cutbows, kokanee salmon, and splake. Due to the unique fertility of the lake and abundance of shrimp, all of these fish have the potential to grow to trophy size early in the season. If you’re looking for a home base for your fishing excursions, try the Mountain River Lodge, which also offers a campground along the banks of the lake itself. 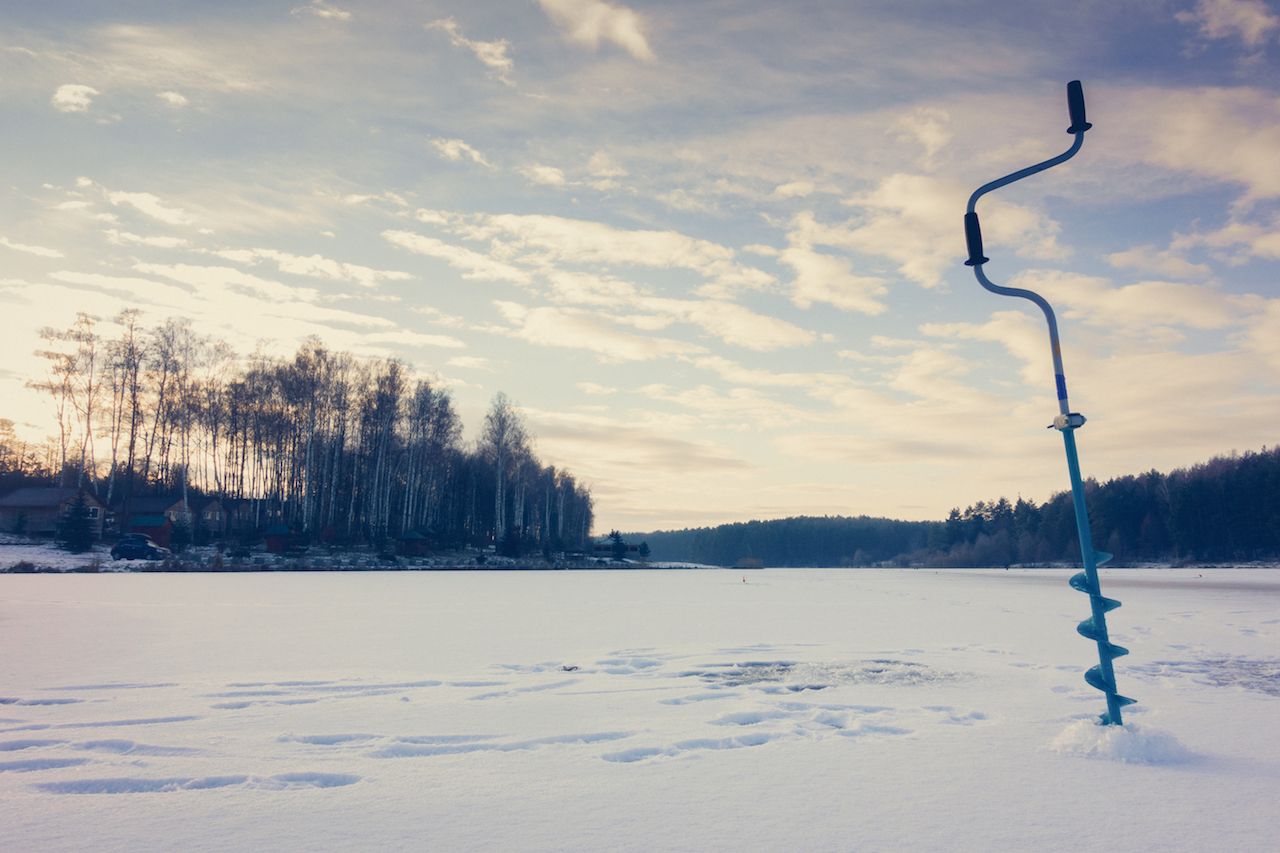 This is one of the most authentic ice fishing experiences you can get. Just a short drive from the town of Luleå in northern Sweden, the Lule River is known for its perch, pike, salmon, trout, and whitefish population. Fishing on the Lule in wintertime is a common pastime among locals, so expect to feel like part of the community when you venture out onto the ice. Several tours are available for beginners, often including snowmobile transport, lunch, hot beverages, and a guide to bring you to all the river’s best fishing spots. Experienced ice anglers can, of course, choose to go unguided, but the nearby Treehotel offers a fairly comprehensive tour for first-timers.

OutdoorHow a Guy Who’d Never Caught a Fish Learned the Beauty of the Sport in the Wilds of Alaska
Tagged
Parks + Wilderness Winter Sports Trip Planning
What did you think of this story?
Meh
Good
Awesome