With its elegant white-stucco buildings clinging to precipitous cliffs, famous black-sand beaches, and ancient mountaintop ruins, it’s easy to see why Santorini tops so many bucket lists. But the island is falling victim to its own success — Santorini’s permanent population stands at just 15,000, yet some two million tourists visit every year. Unsurprisingly, its infrastructure simply isn’t equipped to deal with this influx, from water supply to garbage disposal.

Yet, 75 miles to the north, you’ll find another of the Cyclades Islands that’s every bit as beautiful, while attracting just 10 percent as many tourists. Syros is the capital island of the Cyclades, but it scarcely registers on the agenda of most visitors to the region. Here are nine reasons why travelers should trade Santorini for Syros. 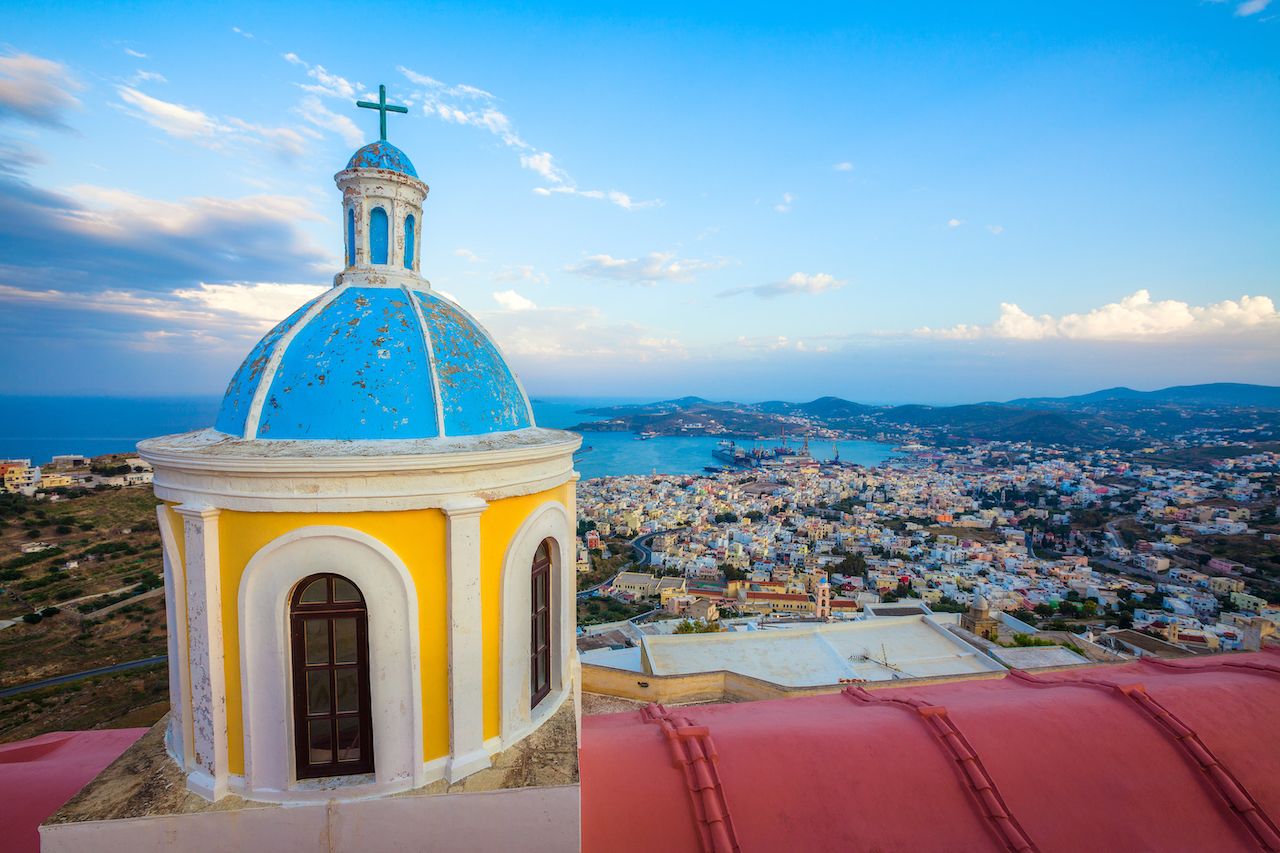 Oia, with its now-famous white and blue houses overlooking the vast volcanic caldera that formed Santorini as we know it today, is undeniably beautiful. But if you fancy snapping a picture of the iconic clifftop village at sunset, be prepared to share the moment with hundreds of other visitors.

Crowds on that scale are nowhere to be seen in Ano Syros, a medieval hilltop town on Syros that looms above the capital city, Ermoupoli. The original residents chose this hard-to-reach location to protect themselves from the regular pirate incursions that threatened the island’s coast.

There’s plenty to see in Ano Syros. Most impressive is the historic Church of St. George, the sprawling and renovated Catholic complex that sits at the town’s summit. Visible from miles around, it’s one of the first things you’ll see when arriving in Ermoupoli by boat.

Even if you don’t fancy checking out the attractions, you can spend an afternoon getting lost in the town’s narrow, sprawling alleys (few of the roads are wide enough for cars). Savor the views, play with the local cats — you’ll find them basking on rooftops, skulking along walls, and meowing at restaurant diners — and stop for regular refreshments at the historic town’s chilled-out bars; the terrace at Συριανών Καφεποτείο (Syrian Cafeteria) is a great spot.

2. There’s more art and culture than one can wish for. 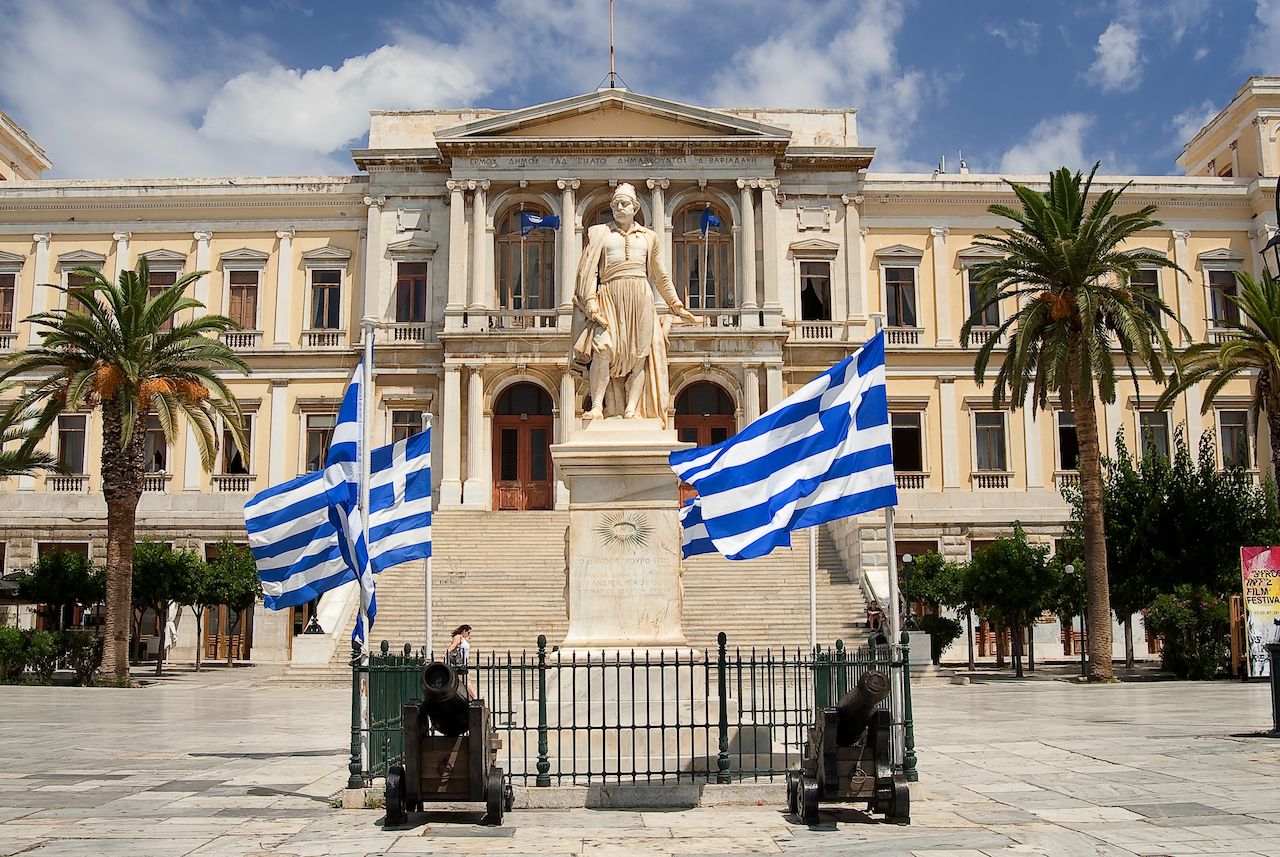 Ermoupoli may only have a population of 14,000, but it’s considered a city thanks to its origins as a key trading port and shipyard. That means it has heaps of museums and gorgeous buildings.

Explore the island’s ancient history by visiting the Archaeological Museum of Ermoupoli. Housed in the imposing town hall, it’s one of the oldest museums in Greece. Or if you prefer your history a little more up to date, check out Ermoupoli Industrial Museum, where — among much else — you can learn about the island’s role in building one of the world’s first electric cars, the ill-fated Enfield 8000.

But you don’t necessarily need to visit a museum to learn about the history of Syros — you can take it in by simply roaming the marble streets of its capital city.

Once you’ve seen the Neoclassical splendor of the town hall and the Apollo Theater, head around the coast to Vapória, the city’s most picturesque neighborhood. Traditionally the trading hub of Syros, it’s dotted with ornate Neoclassical mansions that once housed the island’s wealthiest merchants. The name “Vapória” is taken from the Greek word for ship — a reference to how the coastal houses are so close to the sea that they almost appear to float on it.

3. You get to glimpse at authentic Greek island life. 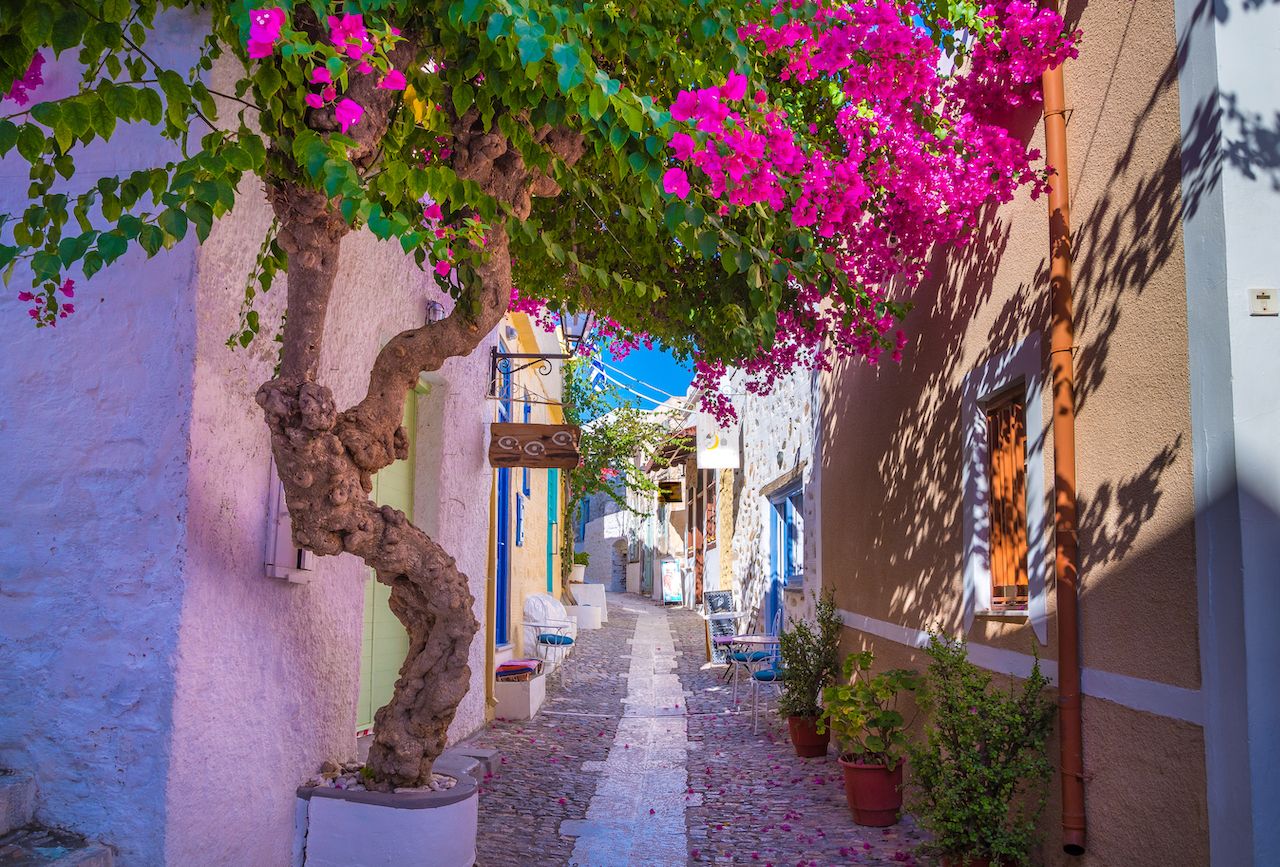 Whereas every corner of Santorini has already been thoroughly invaded by tourists, much of Syros — particularly the island’s hinterland — is still largely unexplored. Leave the resorts and larger towns behind and you’ll soon come across traditional villages hidden away in coves or perched on mountaintops. Practically untouched by tourism, these spots give a real idea of how life has been lived on the Cyclades for generations.

Particularly remote but well worth the journey is San Michalis, also known as Syringas. Located in the far north of Syros, this mountainous settlement is home to little more than a few dozen stone houses, a couple of cozy tavernas, and the tiny but pretty Church of St. Michael, from which the village takes its name. Stop for some food and a stroll along the village’s ancient cobbled streets. 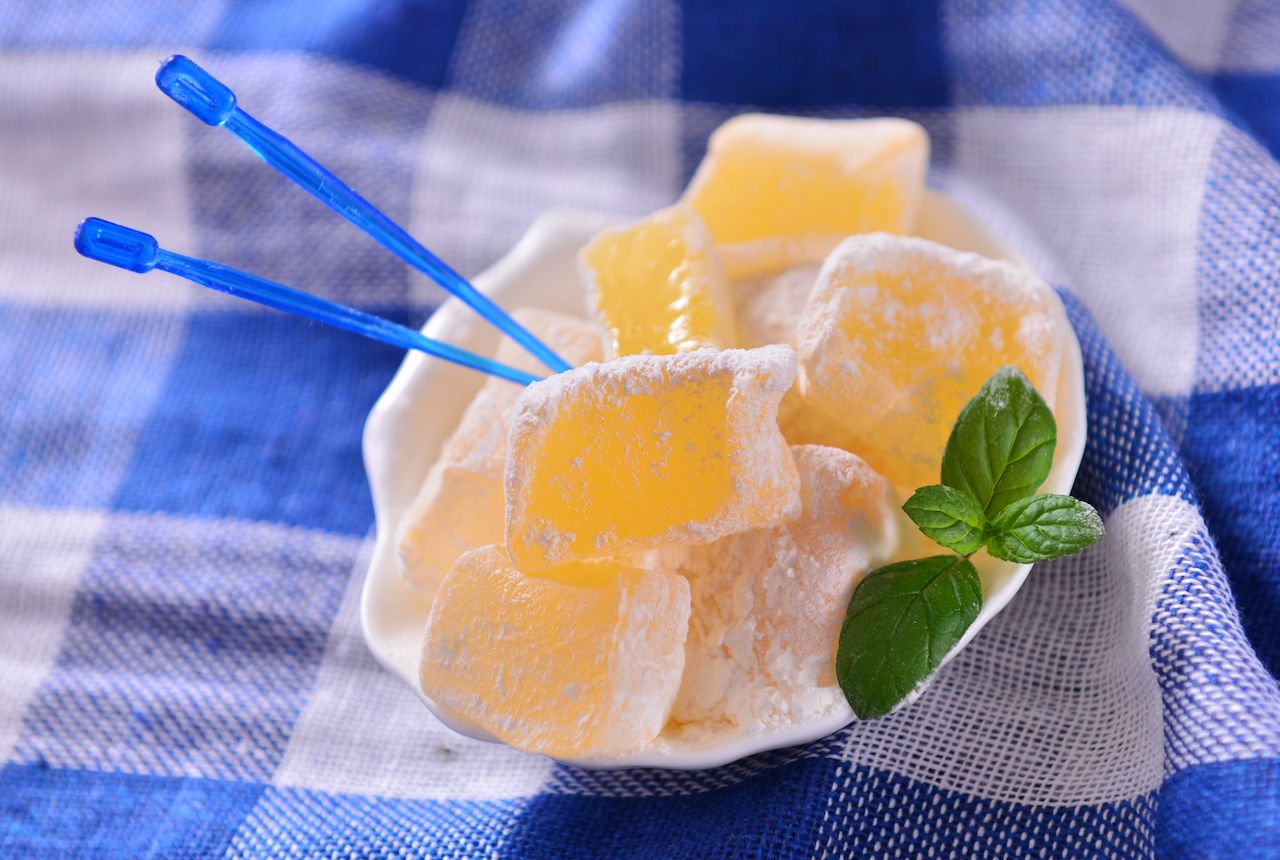 Syros is the home of some of the country’s most unique and best-loved dishes. Perhaps the most famous of the island’s culinary delicacies is loukoumi — essentially the Greek version of Turkish delight. You’ll find these soft, fragrant, sugary treats everywhere from dedicated sweet shops to kafeneia, where they’re often dished up alongside cups of strong black coffee.

Cheese lovers are well catered for on Syros, too. San Michali — a hard cheese made exclusively from the milk of the island’s cows — can be enjoyed either on its own or in omelets and souffles. Its taste is spicy and fruity, thanks in part to the diet of aromatic herbs and plants on which the local cows are fed.

If you’re looking for Greek staples, the dozens of restaurants lining the waterfront and backstreets of Ermoupoli serve up all the souvlaki (grilled meats), seafood, crisp salads, and saganaki (fried cheese) you could dream of, and every village has at least one family run taverna.

5. The tiny island has a big-city nightlife. 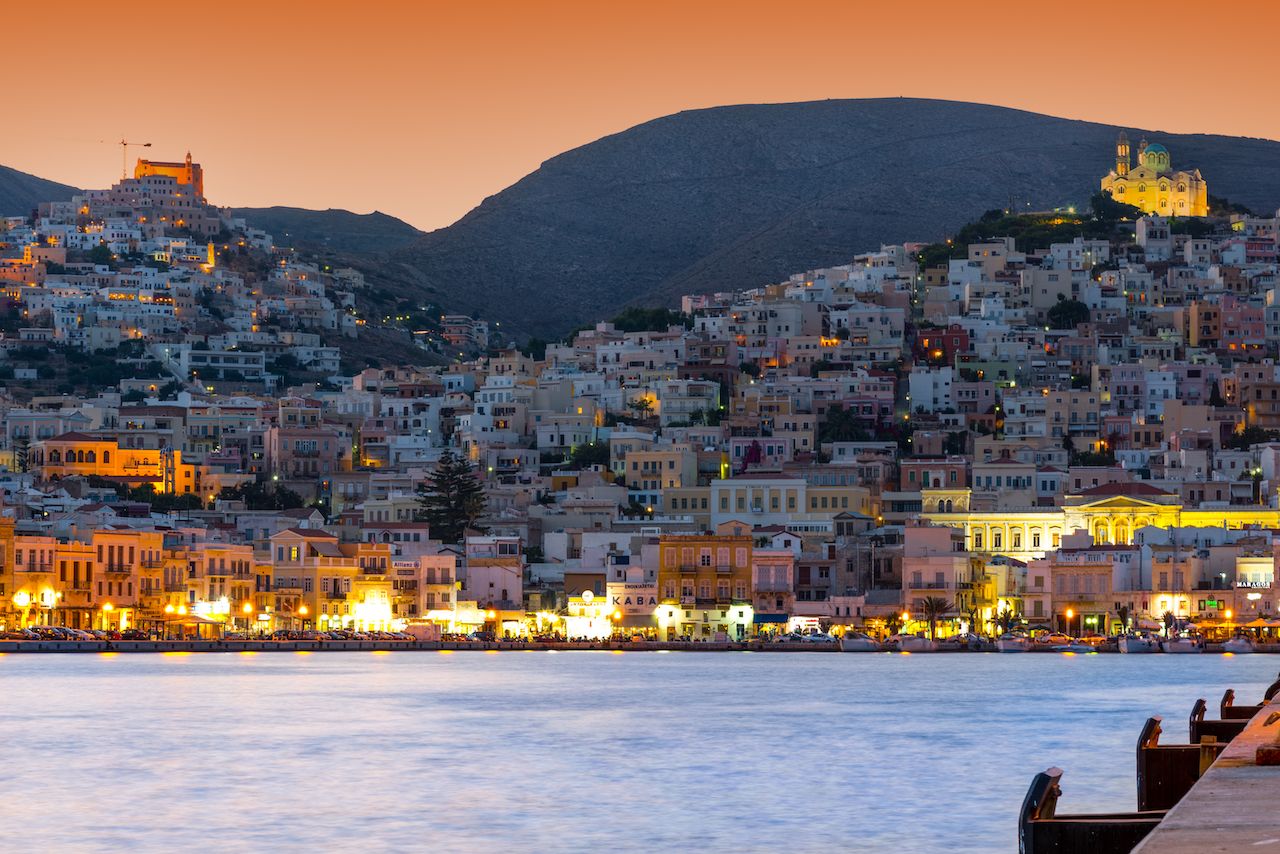 Ermoupoli may be small, but its nightlife puts many much larger destinations to shame. In fact, its compact size actually makes for a great night out, with dozens of bars and restaurants occupying just a few hundred feet of the city’s harborfront. Here, you’ll find trendy, divey joints — the graffiti-clad Boheme del Mar is one of the best — rubbing shoulders with upscale cocktail bars, restaurants, and gelaterias. Most nights, you’ll hear the strains of rebetiko music – sometimes referred to as Greek blues — being performed in a nearby Greek bar or taverna.

Greeks tend to think nothing of staying out until the early hours, regardless of the day of the week. If you really want to soak up the atmosphere, eat late and drink slowly. Expect to be presented with bowls of popcorn, chips, nuts, and other salty snacks each time you order another glass.

6. Syros is the island of festivals. 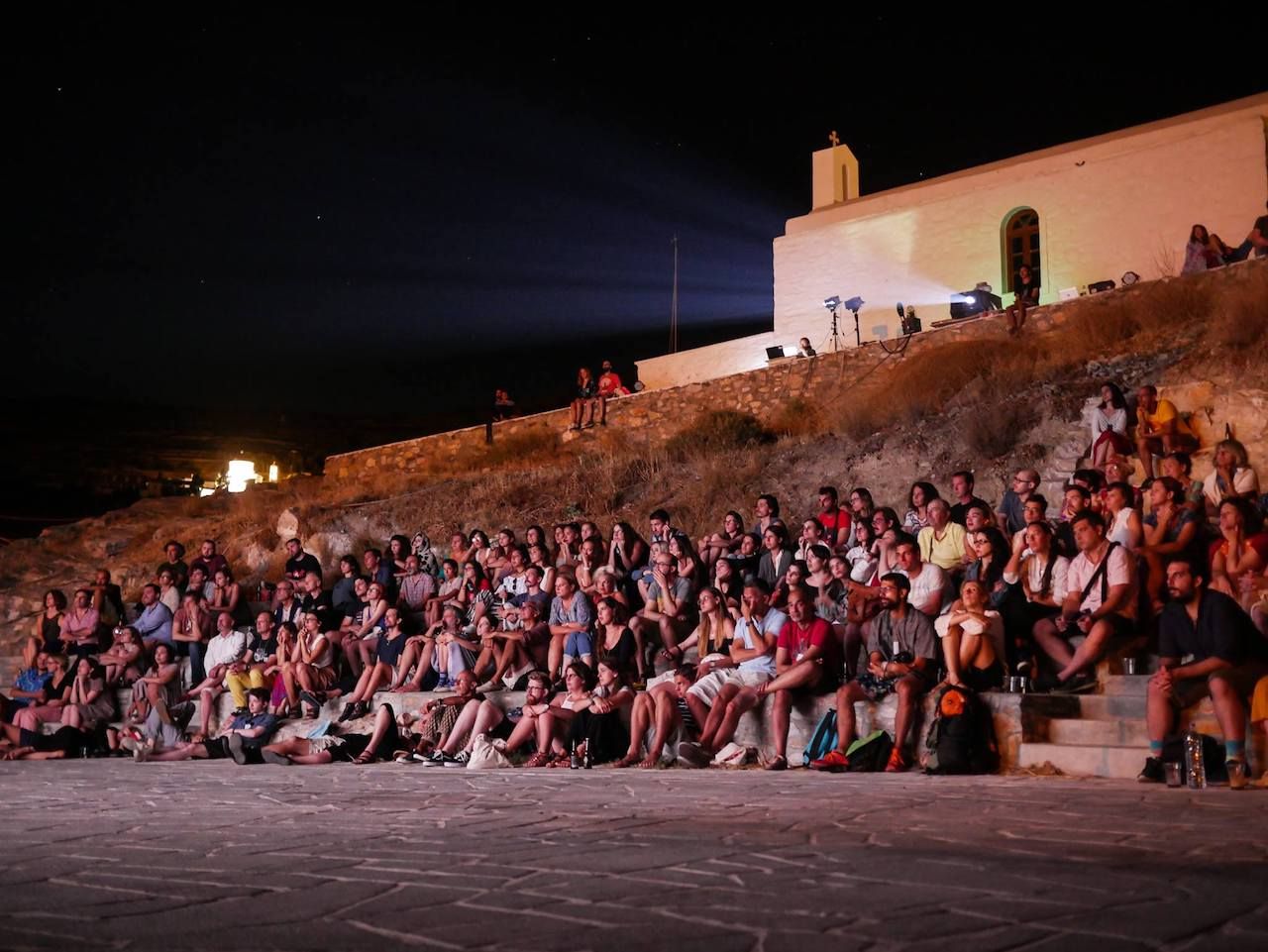 At least a dozen festivals take place on Syros each year. Most are centered on the capital, Ermoupoli, which is home to Syros Tango Festival and the Festival of the Aegean — a two-week series of operatic recitals — along with several more. Others, such as Syros International Film Festival, take place at venues across the island.

As well as cultural celebrations, Syros stages the largest and most boisterous Easter festivities in the Cyclades. Marked by noisy processions and fireworks displays, it’s one of the most fun times to visit the island.

On Good Friday, three huge processions set off from the churches of Agios Nikolaos, Kimisi tis Theotokou, and Metamorphosi tou Sotiros, followed by crowds of revelers carrying lit candles, robes, sponges, and dice (the latter three held aloft on tall poles to symbolize the Passion of Christ). The three processions converge on Miaouli Square, in front of Ermoupoli Town Hall, for raucous hymn-singing accompanied by a vast marching band.

Note that Easter celebrations on Syros take place on Orthodox Easter, which generally falls a week later than other Christian churches.

7. There are plenty of beautiful beaches with crystal-clear water. 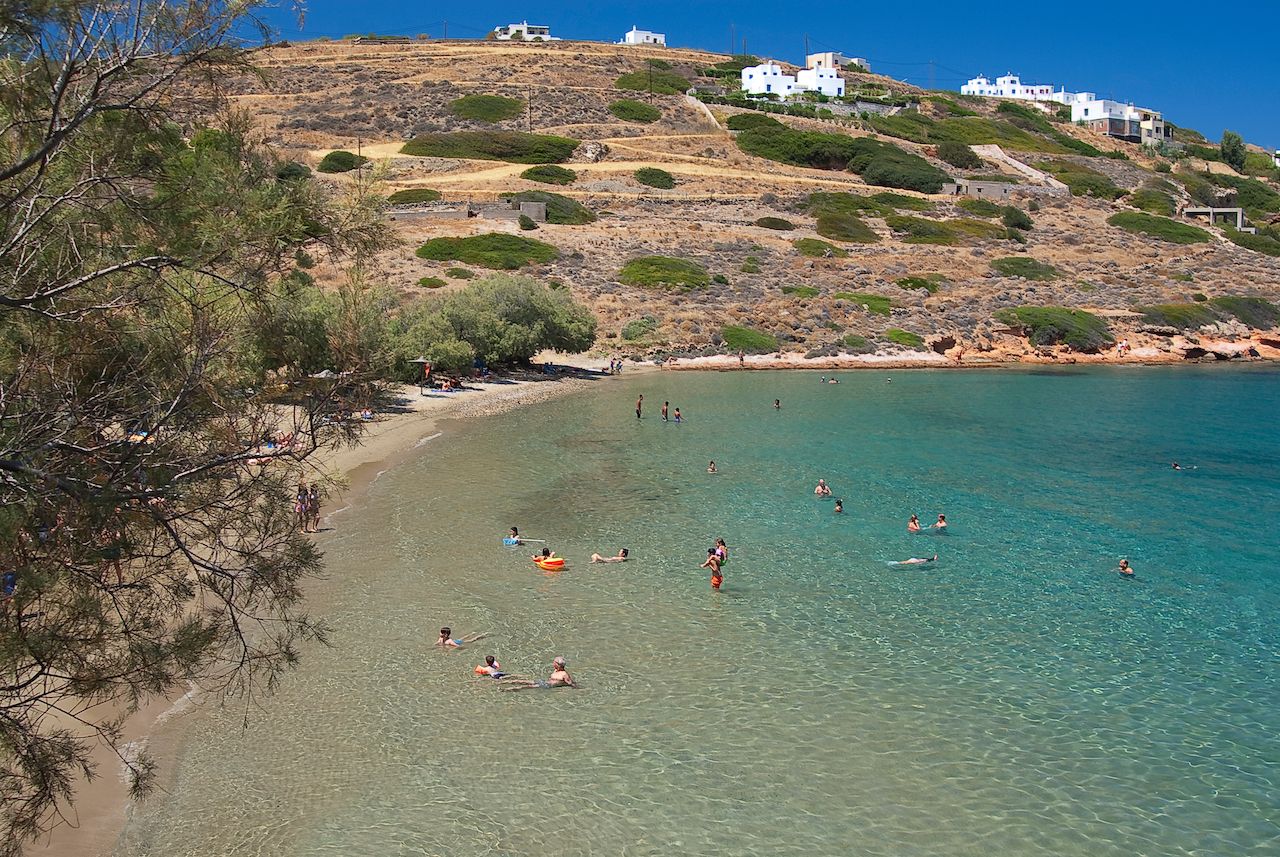 Kini, a friendly village occupying a wide bay on the island’s west coast, has two thin strips of sandy beach that are partly sheltered from the crashing waves of the Aegean by the harbor walls built to protect its flotilla of tiny fishing boats.

Galissas, the most popular beach on Syros, is always teeming on sunny days. Lie back on one of the palm-topped sunloungers and enjoy views of the towering mountains that curve along the bay.

Wherever you are on the island, the beautifully clear sea will entice. Even in Ermoupolis, with its hulking shipyard, locals gather at Asteria Beach — really just a tiny harborside with swimming pool-style steps leading into the water — to cool off and sunbathe on hot days.

8. Touring the island is quick, easy, and rewarding. 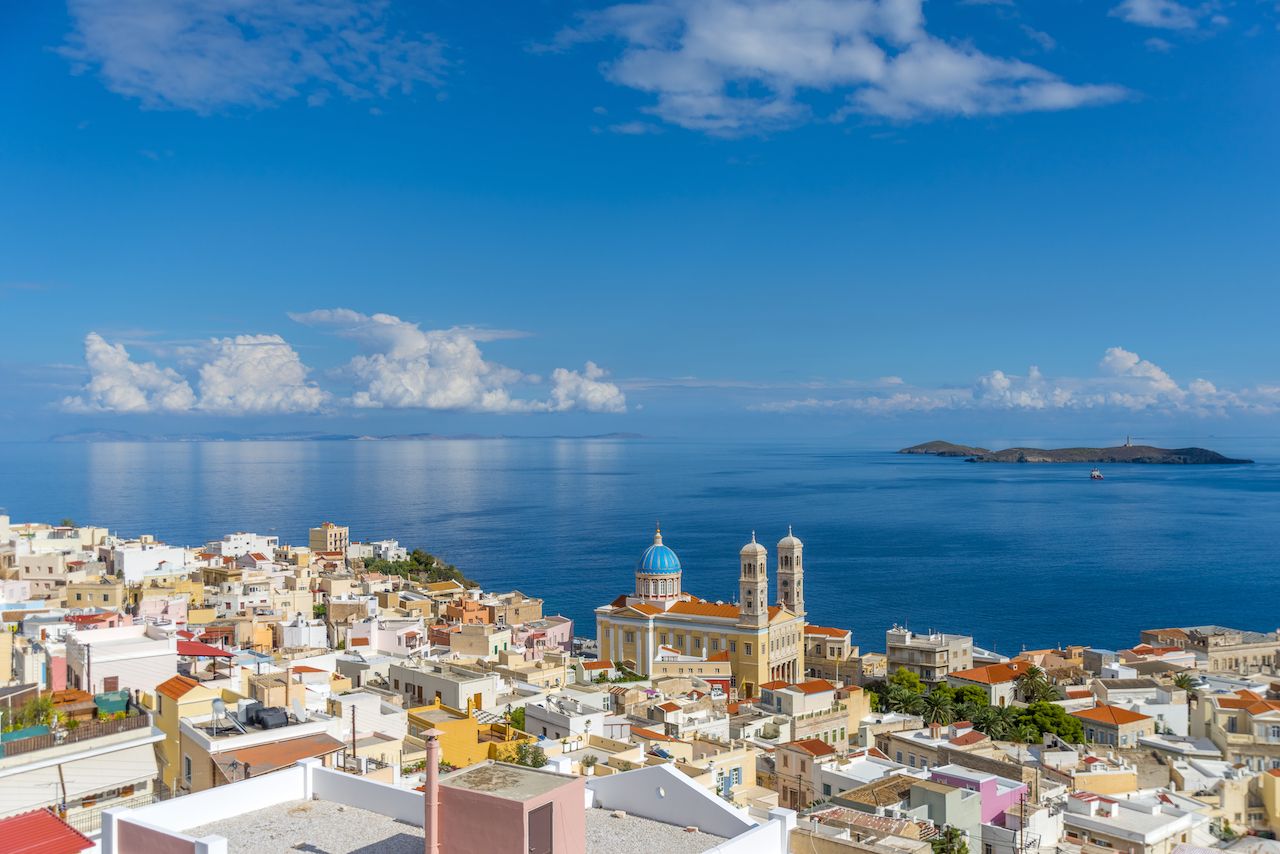 Those who make the effort to hire a car and explore its back roads won’t regret it.

Pullover on Episkopio — the main road running from east to west across the mountainous center of Syros — to enjoy unparalleled views over Ermoupoli, with the shipyard, the vast sea defense, and the white-walled, red-roofed buildings stretching out beneath you. A circuit taking in the island’s southern part, calling at the villages of Kini, Vari, Megas Gialos, and Episkopio takes no more than five hours.

To get a little further off the beaten track, head for the rugged, sparsely populated northern coast. The village of Kampos lies at the end of the winding, single-track road from the capital; if you’re feeling brave, leave the car here and make the less than two-mile trek to the secluded Americanou Beach. Only reachable on foot or by boat, and hidden from view by a low fringe of palms and pine trees, it’s as tranquil as it gets — just remember to bring plenty of water, because you won’t find any shops.

9. You’ll get much more for your money. 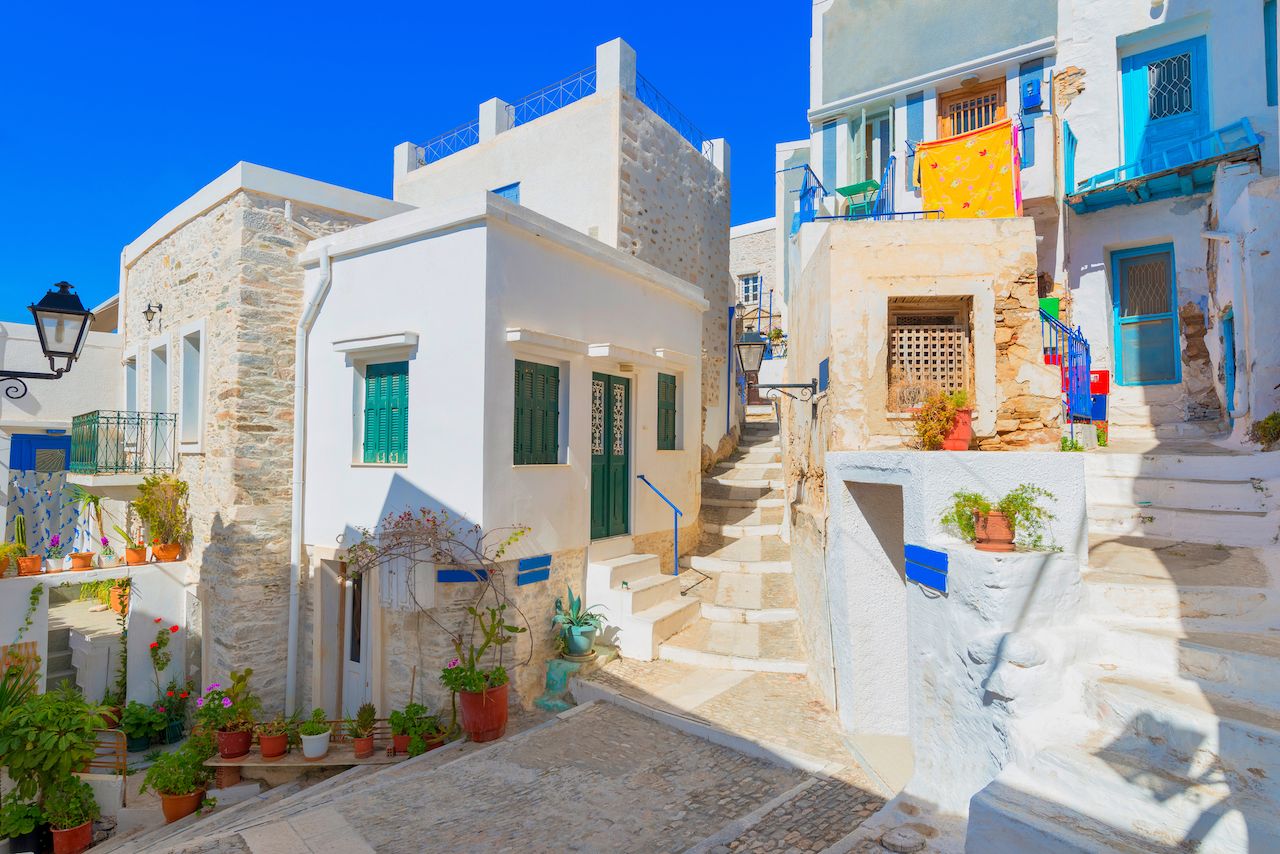 If you’re traveling on a budget, Santorini is not a great option. With its many swanky resorts, you’ll struggle to find a hotel room for less than $120 a night in high season. Eating and drinking don’t come cheap either, thanks to the island’s high-end bars and restaurants.

You’ll enjoy a lot more bang for your buck on Syros. Whether it’s dining out, going for drinks or booking accommodation, expect things to cost as little as half what you’d pay on more well-known islands like Mykonos or Santorini.

CultureWhy the Greek City of Thessaloniki Needs To Be on Your Radar
Tagged
Beaches and Islands Insider Guides Greece
What did you think of this story?
Meh
Good
Awesome

How To Spend 11 Epic Days Exploring the Ruins, Islands, and Cities of Greece