Low-intervention wine, natural wine, low-fi wine — in these times of hipster foodie terminology, everything that’s actually worth imbibing seems to have multiple monikers. Whatever you call it, the effect of low-impact wine on the world’s dining scene is undeniable. Grounded in the philosophy of “nothing added and nothing taken away,” the trend looks to continue as consumers grow more vocal about additives, production ethics, and the environmental impact of traditional winemaking. Natural wines have for years been a divisive, yet popular, topic within establishments in Paris, New York, and London. But while those cities move more rapidly from trend to trend, Berlin is a long-standing home to all things both hip and counterculture, and without nearly the fervor, the German capital has had a stronghold on the natural wine movement since well before the rest of the world caught on. From restaurants that have mastered natural wine pairings to natural wine shops that double as tasting rooms, these six wine bars prove that there is no better time to add Berlin to your list of oenophile destinations. 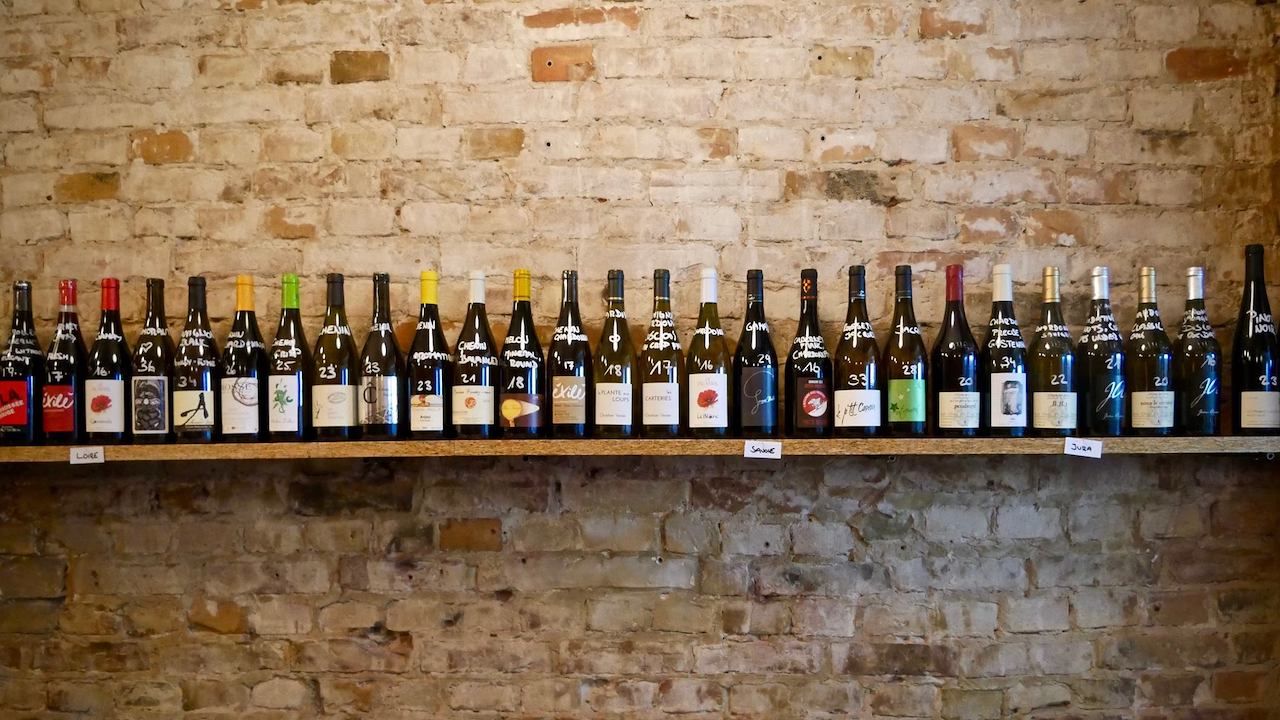 Jaja, in the Neukölln district of south Berlin, cements natural wine’s prowess as a solid accompaniment to a wide range of foods. Its inventive, seasonal menu rotates weekly and features locally sourced products. During warmer months, you can sit at one of the picnic tables outside for prime Neukölln people watching and grab wine by the bottle or by the glass. The wine menu has a strong French focus but stocks wines from across the growing regions of Europe, with the added bonus of serving as a sort of boutique wine shop. You can actually order bottles directly from the establishment and have them shipped to you via UPS. So, if that bottle of Hautes Côtes de Beaune from Maison en Belles Lies paired perfectly with the beef tartare, you can attempt a riff at home and at least know you got the wine part right. 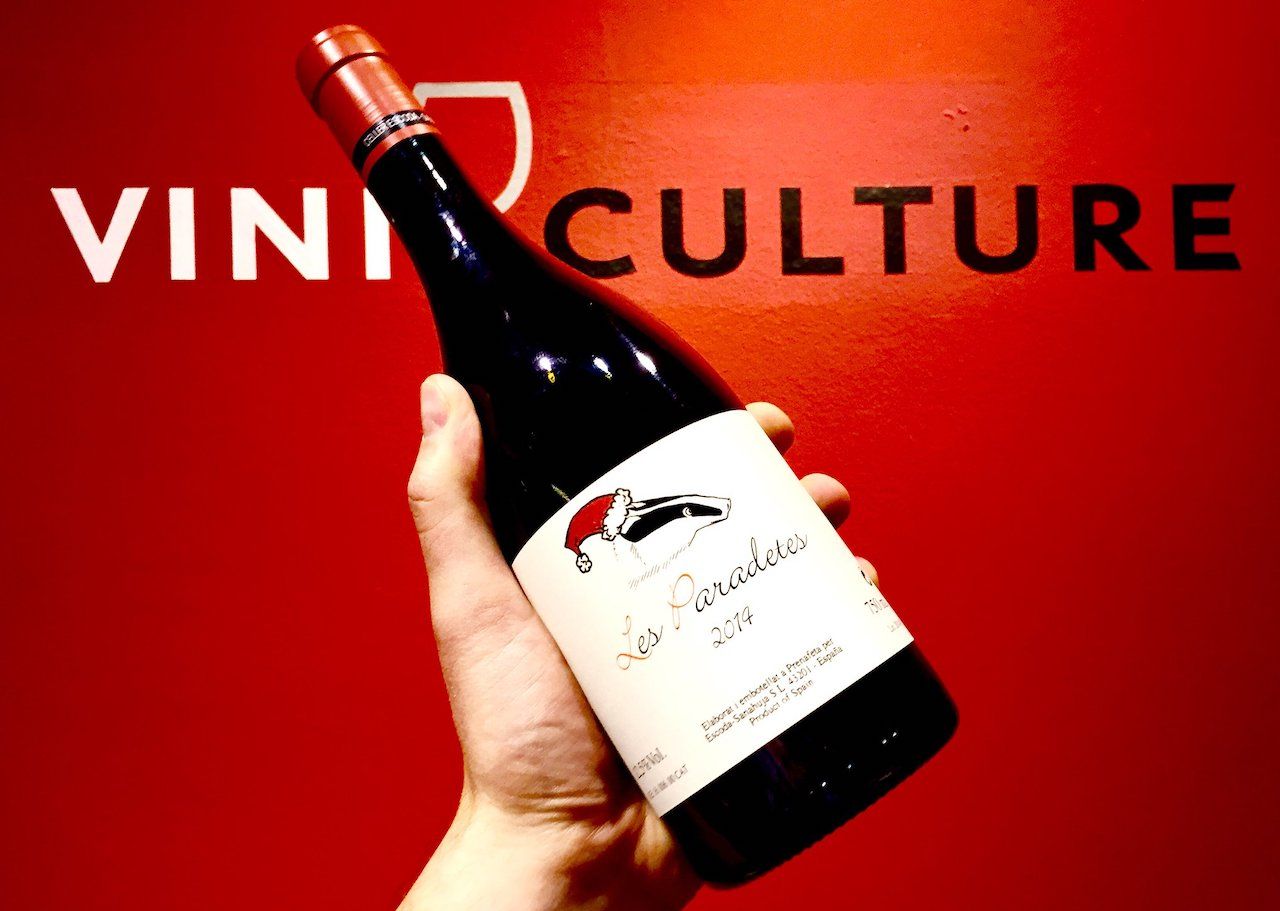 Viniculture has helped to champion natural wine in Berlin on the city’s west side. Although it’s one of the only places to get natural wine in what was the former west of Berlin, it also happens to import and provide rare low-intervention wines from all over the world with a particular focus on Austria, Germany, Italy, and France. There are weekly tastings and a friendly staff who will listen and help guide you to the wine of your dreams. You can also sit at one of the cozy tables out front and enjoy your bottle while people watching. Much like you’re at a vineyard tasting room, Viniculture started a wine club, aptly named Vinibox, that ships subscribers three bottles of wine every three months, curated by a different staffer each time. So the server might pick the wines one quarter and the wine buyer the next, accompanied by the same tasting notes and love stories that you get in their shop. Who said hipsters aren’t innovative? 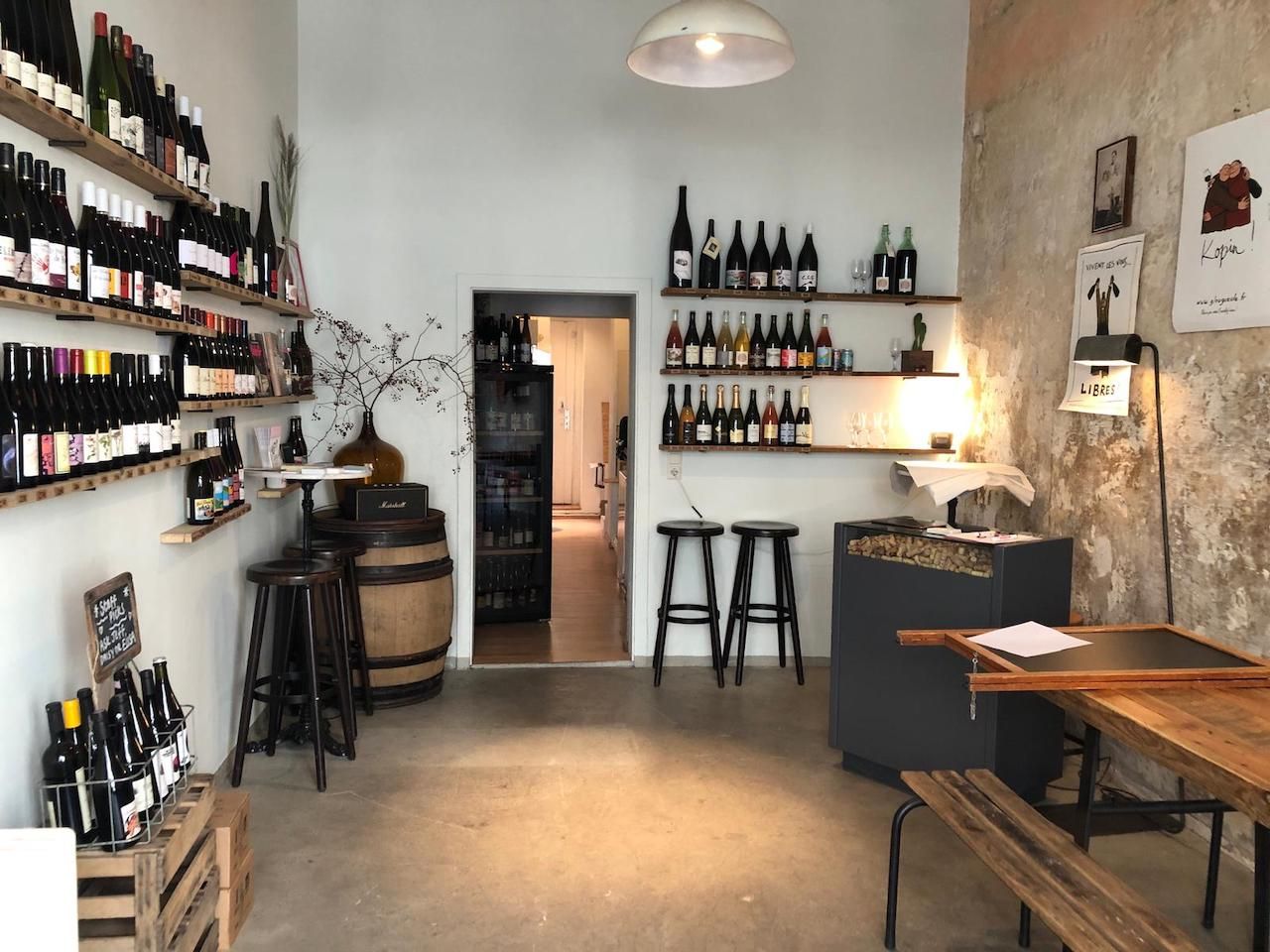 Pay a visit to Berlin and you’ll somehow, someway, end up in the center of the city in a neighborhood called Mitte. No matter what it is that brings you in, stop by Rocket Wine. As the producers of Berlin’s homegrown natural wine fair Wine Rush, Rocket Wine oozes cool but with enough down-to-earth advice that you’ll actually feel welcome in its space. Enjoy wine by the glass at one of Rocket Wine’s sidewalk tables or grab a bottle to go. If, however, you’re feeling social, check its website and get tickets to one of its tastings, which feature a rotating list of natural winemakers and themes such as “bubbly night.” In addition to being educational and the perfect way to justify your craving for fermented grapes as a cool and productive hobby, these tastings tend to turn into wine-fueled social events. In them you have both a great way to meet people and a pregame for a night on the town. 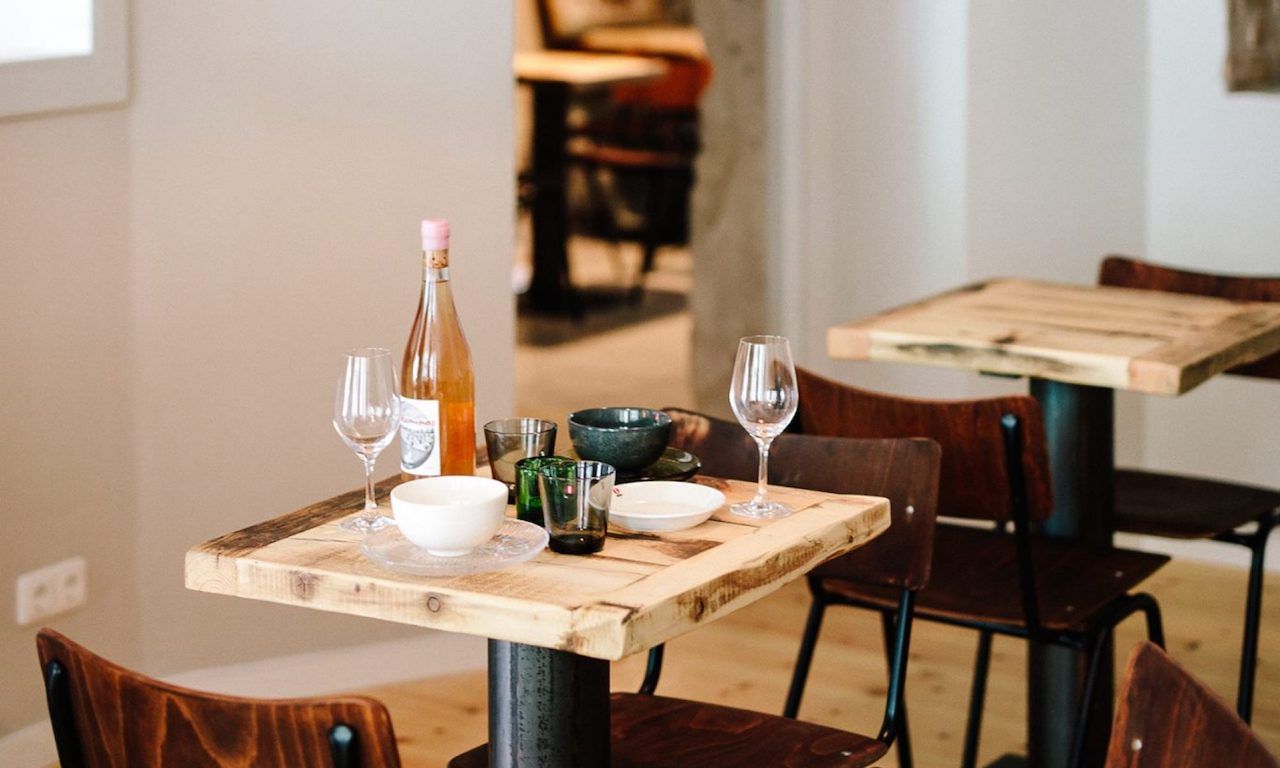 Natural wine and Scandinavian cuisine play off one another in this restaurant and wine bar hybrid near Berlin’s Tempelhofer Feld. Palsta looks out on the park and at night, gives the illusion of an ocean — thus adopting the name the “riviera of Neukӧlln.” The coolest thing about Palsta is that the food is as big a draw as the wine, built around a seasonal menu of small tasting plates. Learning the basics of pairing is easier the more chances you get, after all, and its thoughtful list of by-the-glass wines, along with a larger list of bottles, provides ample opportunity. A glass here will run between $7 to $9, so you won’t break the bank. 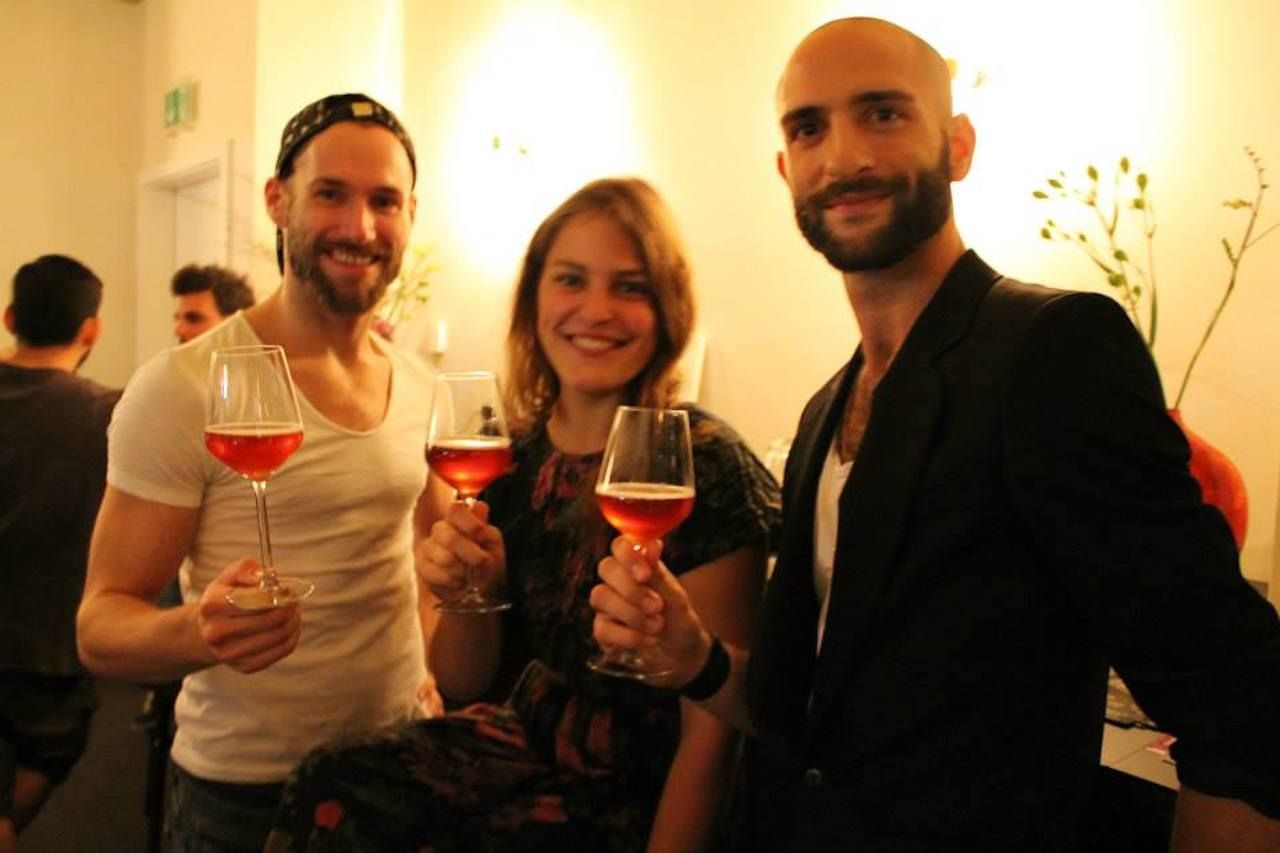 Naturales Winebar is the perfect blend of Berlin grittiness and Spanish charm. It’s no-frills in the best possible way — pull up a seat at the long bar that snakes down a dimly lit interior. If you use reading glasses, bring them because you don’t want to be that person shining your cellphone light on the menu. It specializes in Spanish wines and tapas. Once the perfect pour is in front of you, relax outside with a grilled baguette and cheese. 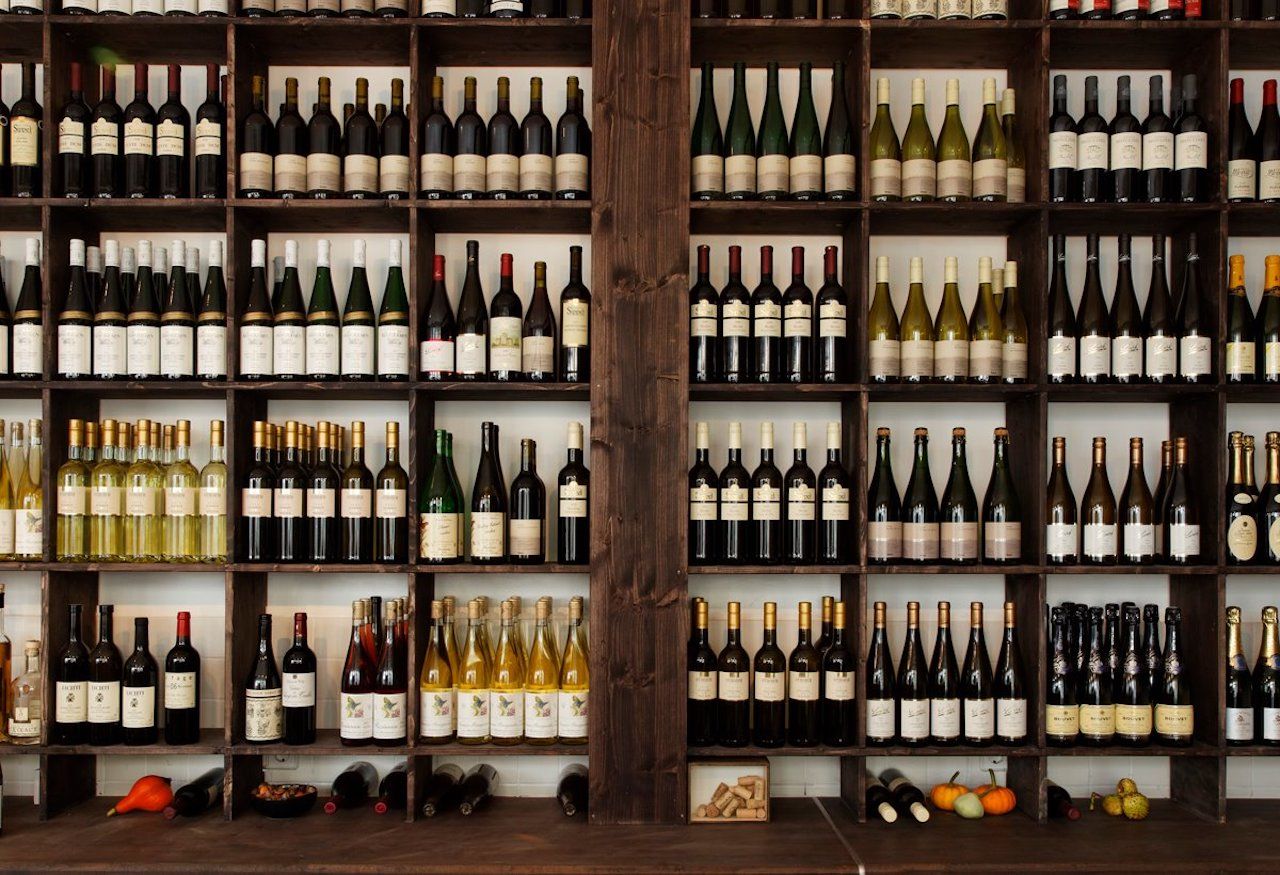 Located in the heart of Kottbusser Tor, Ottorink’s versatility means you can stop by on your way to a night out on Oranienburger Strasse, or you can spend a leisurely evening working your way through its stellar wine list. While not every wine on the list is low-intervention, there’s enough to keep natural wine enthusiasts intrigued, making it a great option for crowds mixed with low-fi converts and traditional wine drinkers.

Insider GuidesThe 7 Most Exciting Places To Travel To Drink Wine in 2019
Tagged
Restaurants + Bars Insider Guides Wine Berlin, Germany
What did you think of this story?
Meh
Good
Awesome