In superhero movies, glowing water usually means that the villain poisoned a river with toxic sludge for nefarious reasons – probably to create a whole city of mutants. However, in real life, glowing water is often the result of bioluminescence: a natural phenomenon in which tiny organisms called dinoflagellates light up like sparklers when disturbed or agitated, as they are by waves and currents.

From afar, bioluminescent activity can look like a blue, glowing wave rolling over the surface of a bay or ocean. Up close, it seems as if stars are shining in the water, and if you’re lucky enough to swim through it, the effect is pure magic. The phenomenon happens all over the world, from Maldives to Jamaica. Fortunately, there are bays and beaches in every corner of the US where you can go bioluminescent kayaking or swimming, or even see it from the beach. Here are six places to see bioluminescence that don’t require a passport. 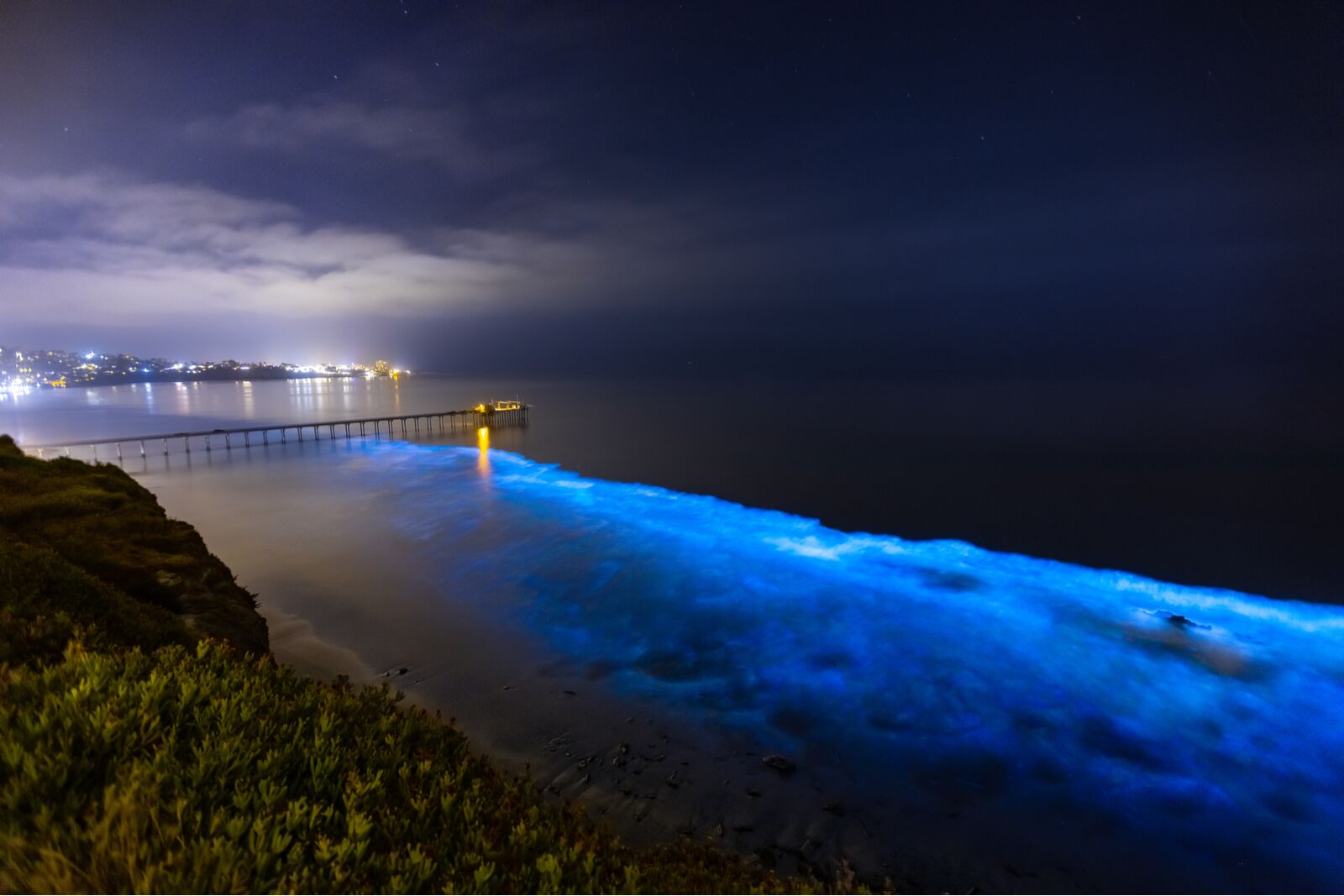 If you hit southern California beaches at the right time, you can catch bioluminescent action in the waves of the Pacific Ocean all the way from San Diego to Santa Barbara. But the most consistent concentration of dinoflagellates sits just north of San Diego in areas around La Jolla and Torrey Pines.

Bioluminescence in California is primarily from Lingulodinium polyedrum – the tiny organisms that cause red tides during the day and glowing coastal shorelines at night. While red tides don’t always make for the best swimming, they do make for spectacular shows when the moon is dark.

Since light pollution is the enemy of bioluminescence, you’ll want to head to a state park to get the full effect. Standing atop the cliffs at Torrey Pines State Beach or Sunset Cliffs gives you the bonus of an elevated view of the action. If you have your own boat, get in the water at the La Jolla Shores Boat Launch for an after-dark bioluminescent kayaking experience as most state parks close the gates after dark.

Best time to go: The algae that cause San Diego’s red tide are more abundant when the Pacific Ocean is warmer. So the height of summer gives you your best chance to see the bioluminescence. Spring can also be a good time, depending on the water temperatures. If you do an online search for bioluminescence in San Diego, you’ll be able to find the most recent reports of what areas seem most active. 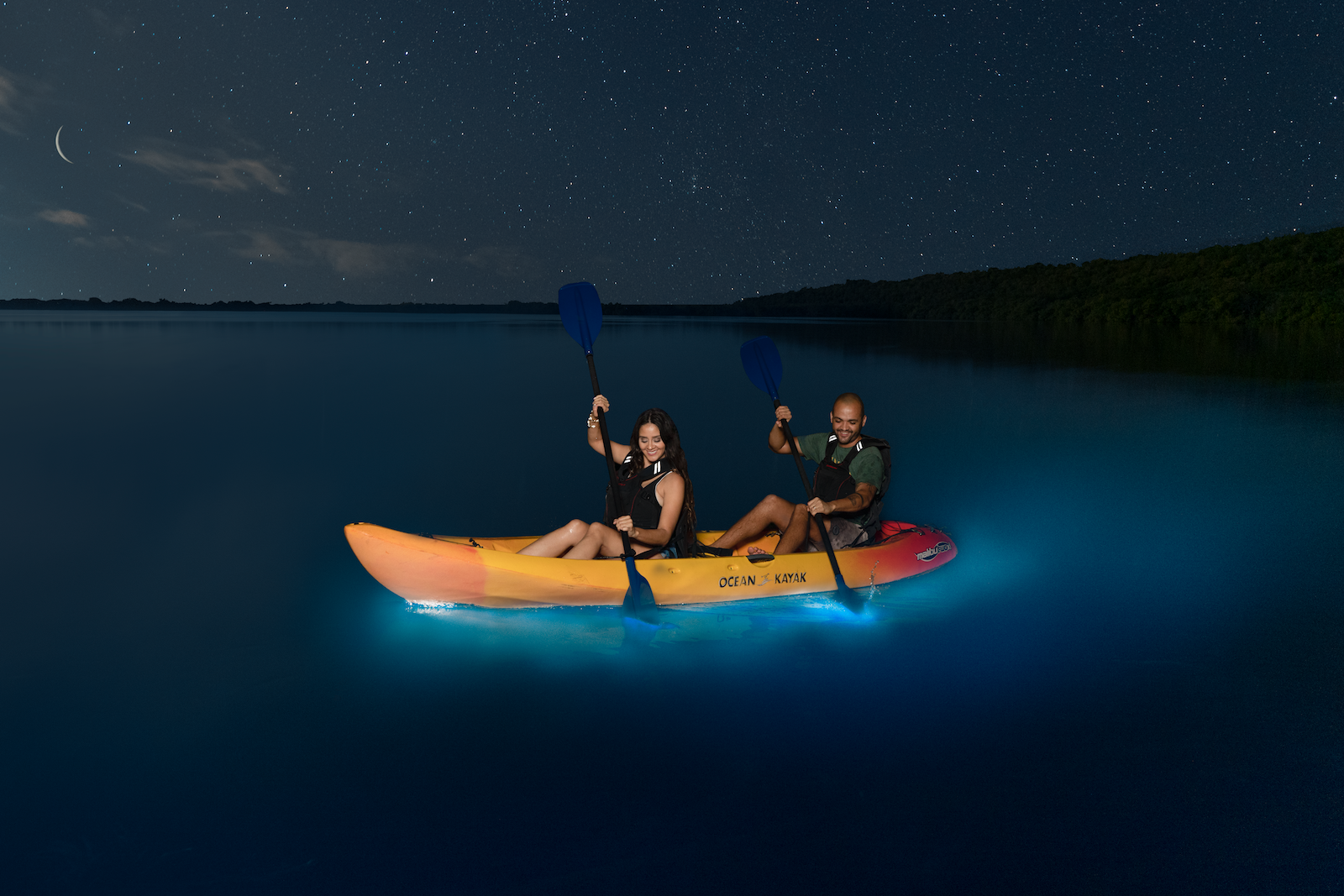 Probably the best known and certainly the most visitor-friendly bioluminescent bays in the United States are in Puerto Rico. This Caribbean territory has not one but three places to experience bioluminescence: Mosquito Bay on Vieques, Laguna Grande in Fajardo, and La Parguera in Lajas.

Mosquito Bay is the trickiest to reach as it’ll require taking either a short flight or ferry ride from the main island of Puerto Rico. But once there, you’ll be treated to the highest concentration of dinoflagellates of any bioluminescent bay in America; their numbers nearly doubled after Hurricane Maria. The bay sits inside a natural reserve surrounded by tranquil mangroves – and not much else. So when the moon is new, there’s nearly no light to disrupt the natural show. Bioluminescent kayaking is a popular activity in the area, and most companies will offer tours.

Laguna Grande isn’t so much a bioluminescent bay but a lagoon where you can rent a glass-bottomed kayak, paddle through an eerie canal, and enjoy the light show through the bottom of your boat. Because it’s less than an hour from San Juan on the northeastern tip of the island, it’s also the most crowded place for bioluminescent kayaking on the island. So you may want to try and go during the week or non-peak times.

Lajas, in the southwestern part of Puerto Rico, is the only one of the island’s bioluminescent bays where you can jump in and swim with the glowing microorganisms. Late-night snorkel trips offer you the rare opportunity to immerse yourself in glowing water, and diving to the bottom of the bay with goggles on is a little like speeding through the stars. It’s a bit of a trek from San Juan, but it’s well worth the time investment if you spend the night.

Best time to go: Summer thunderstorms can drop loads of rain into Puerto Rico’s bio bays, so the best time is during the driest months of the year. Those are typically December through April, but there’s no guarantee in the tropics. As always, going during a new moon offers the least light pollution, so time your trip for when the moon is at its smallest if you can. 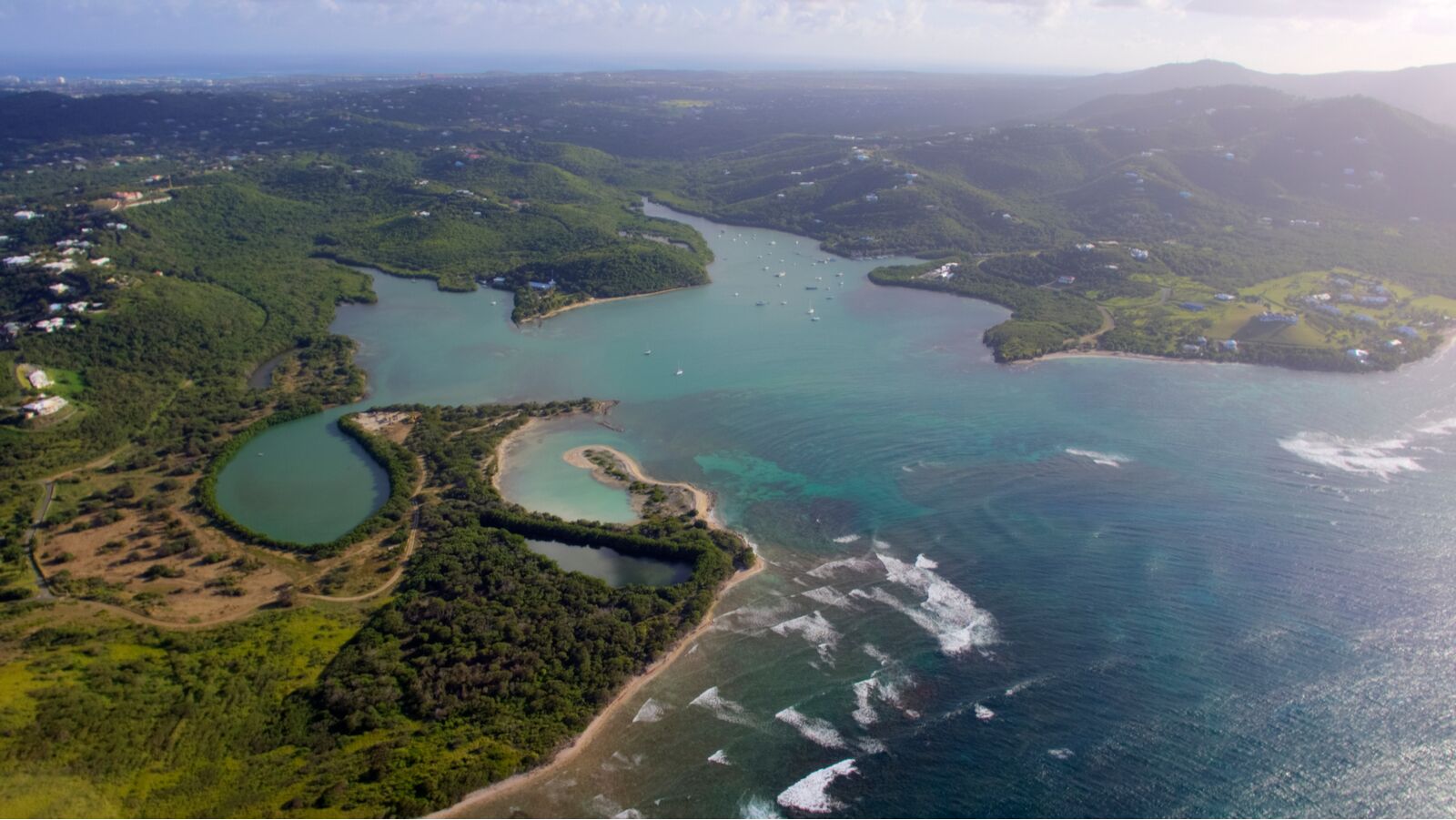 Like Puerto Rico, St. Croix is also a U.S. Caribbean territory and has multiple spots around the island with bioluminescent activity. The most well-known is the Salt River Bay National Historic Park and Ecological Preserve in the middle of the island’s north side. The mangrove-filled park nurtures the perfect conditions for glowing waters, where you’ll find both dinoflagellates and comb jellyfish in the bay’s warm waters. Comb jellyfish don’t sting, either, so if you’re gentle, you can agitate the water near them for a truly unique experience.

The other good spot on St. Croix to see bioluminescence is Altona Lagoon, just outside the fabled Buccaneer Hotel. It’s the easiest to access without a car as Christiansted is just about a mile away. Though it’s not crowded in the traditional sense of the word, the area’s not quite as secluded as Salt River Bay, so you may encounter slightly more light pollution.

Best time to go: Much like Puerto Rico, drier months bring clearer water, which makes the bioluminescence easiest to see. In St. Croix, December to April will be your best months, though that’s also the height of tourist season. 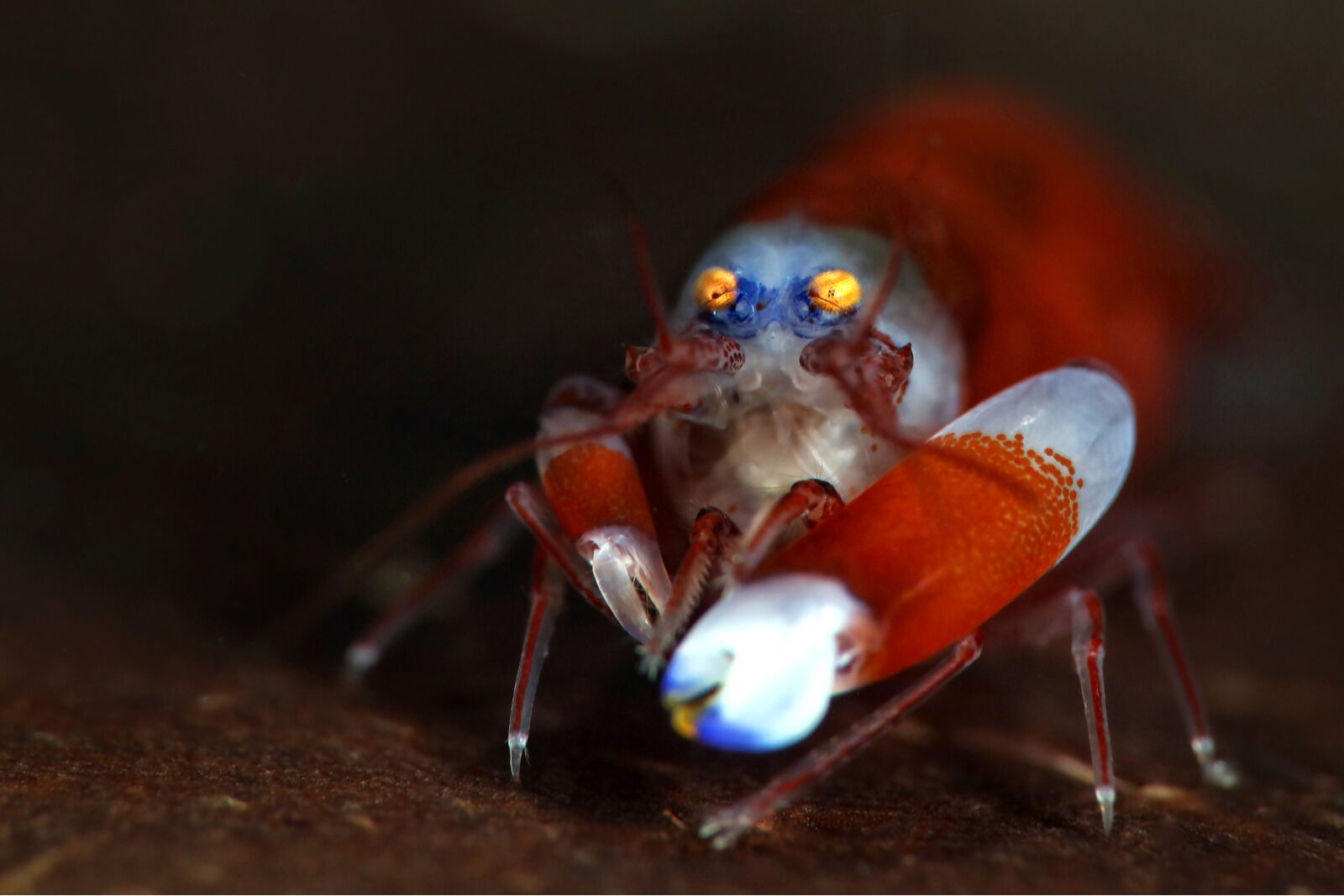 Florida has a few species of bioluminescent creatures that cause the waters around Cape Canaveral to glow bright blue. In addition to plankton, Florida is home to comb jellyfish and snapping shrimp, which glow like they’re being showcased in a mood-lamp aquarium. They don’t always cause the water to change color like the billions of plankton do, but they do make for intriguing sights during a late-night bioluminescent kayaking tour.

The stretch of the Intracoastal Waterway between Port St. Lucie and Titusville is the best place in the state to catch bioluminescence. (It goes by different names as you travel north, from the Indian River Lagoon to the Indian River.) And in Cocoa Beach, it branches off into the Banana River. These are all excellent spots to book a kayak tour and paddle through the calm Florida night. Sync up with NASA’s schedule, and you can catch a rocket launch in the morning, then a different if equally exciting kind of light-up excitement in the evening on the water.

Best time to go: For the full sheet of plankton bioluminescence, head to the Space Coast in the summer when the warm waters make for the most activity. To see glowing shrimp and jellyfish, visit in the winter, where you’ll have the bonus of less humidity and a cool breeze. 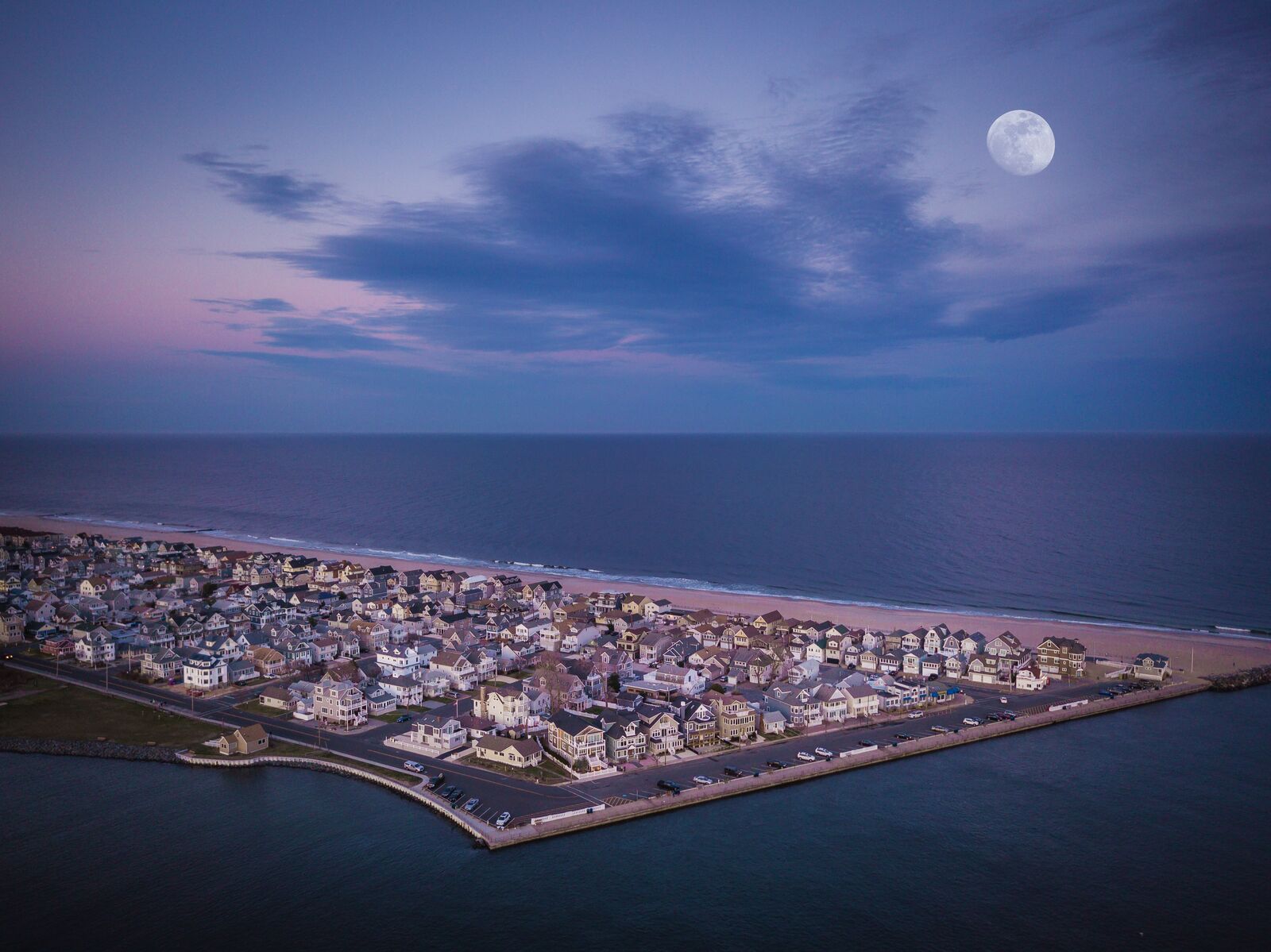 Bioluminescence isn’t a phenomenon reserved for tropical climates. Case in point: this charming beach town on the Jersey shore, where summertime trips to the boardwalk sometimes come with a side of bioluminescent action. Because Manasquan is quieter than towns with Ferris wheels and dance clubs, you’ll catch the odd blue, glowing waves on a warm summer night simply by strolling down to the shoreline. There aren’t any area bioluminescent kayaking tours because it’s an unpredictable occurrence, but you could put in your own boat anywhere along the beach if you see it happening.

Like California, New Jersey’s bioluminescent beaches come from red tides, which, again, might not make for great beach days – but do make the nights pretty spectacular. (Red tide can cause skin irritation, among other minor reactions.)

Best time to go: Summer between mid-July and Labor Day is the best time to catch bioluminescence in New Jersey. It’s also the best time to visit the shore, so if you’re planning a trip, know the rest of the world probably is, too. 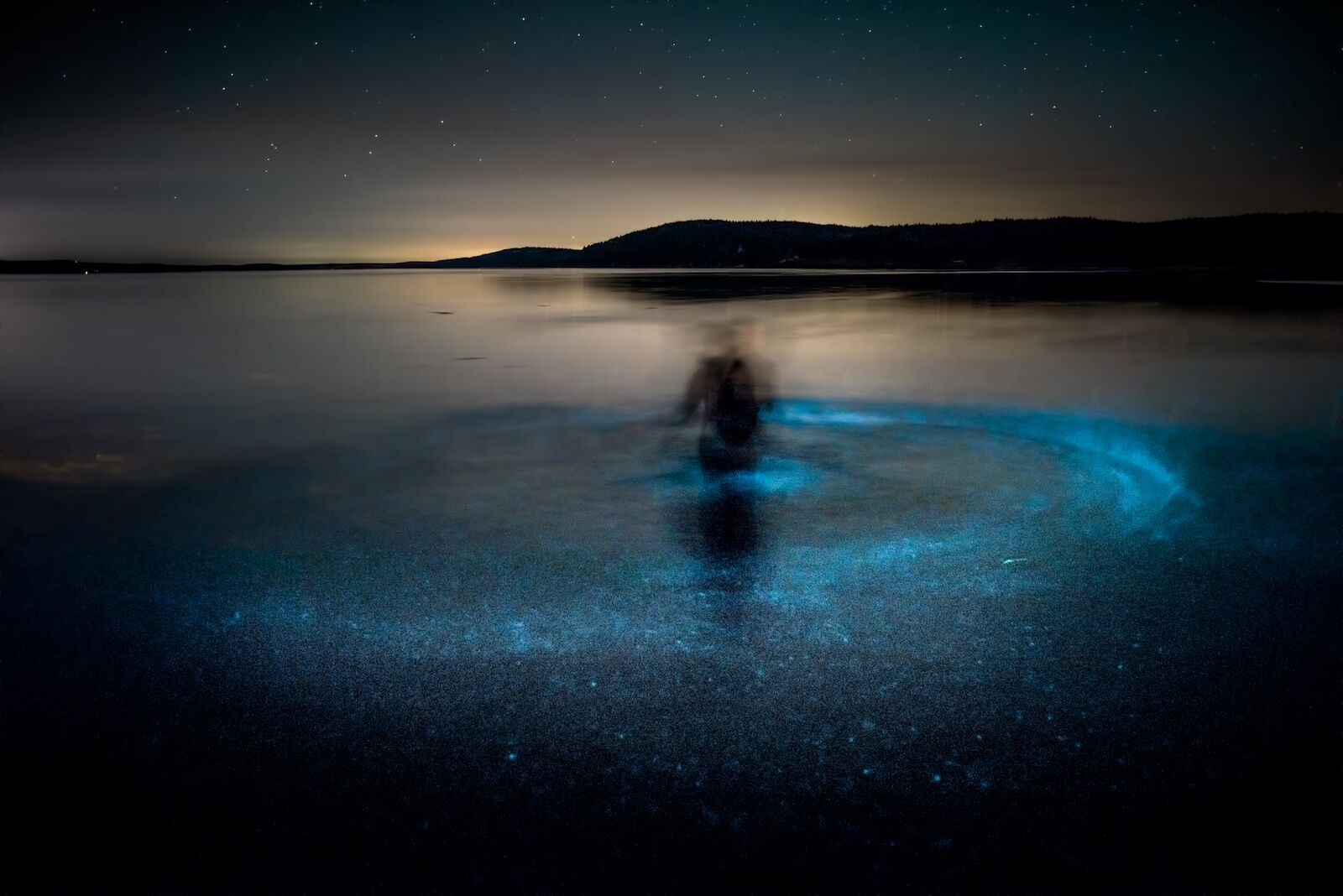 The cross-section of tides that meet in Washington’s stunning San Juan Islands bring an abundance of organisms rarely found in one place — and that’s not just huge creatures like whales. Many of these sea creatures are very small and very bioluminescent, making a kayak trip off San Juan Island a proper education in glowing sea life.

Bioluminescent kayaking tours typically meet in Friday Harbor, then shuttle you down to a beach with easy ocean access. Because sunset is late in the summer that far north, tours can sometimes leave at 9 PM or later, so make sure you’re up for a post-midnight adventure.

To get to the San Juans, you’ll take a short seaplane ride from the King County Airport (just south of downtown Seattle) or drive north of the city and take a ferry from Anacortes across the Puget Sound. The journey may take a while, but the scenery will make you wish it was longer, whether you travel by boat or plane.

Best time to go: The weather and water are usually optimal for beach trips from late May to early October. The closer to mid-June you travel, the later in the evening the tours depart. But those times also likely will provide the warmest weather.