The northern border of the Schleswig region of Germany cuts right around the small city of Flensburg, known best as the final seat of Nazi Germany for a full week following Hitler’s death until the surrender of German forces in 1945. These days, many Danish people call Flensburg their home despite the city not being part of Denmark since 1864. Even though Flensburg chose to remain part of Germany when given the option, Danes and Germans living in the area have an extremely amicable relationship.

Spend any time Flensburg and you’re bound to witness something akin to this encounter: A Danish man walking through the city center shopping mile enters a store and approaches a worker. The store worker greets the Danish person in partially broken Danish. The man responds in German, and the conversation carries on this way until the man leaves with a package of saure rolle, a sour sausage popular in the area. Both are being polite and, at the same time, showing that they are respectful enough to have learned the language of the other’s country.

Border towns are simply the best for travelers short on time or strapped with indecisiveness. They have the best of each countries’ food, drinks and cultural traditions combined into one. Flensburg is one of the best of these towns in Northern Europe, perfect for a weekend getaway on a trip to other parts of either country. The city has a population of around 100,000, and there’s plenty to do without it being too overwhelming. Time will fly, even if you choose to spend much of it people watching from one of the many coffee shops in the city center. Just be prepared for the language barrier. While odds are high that tables around you will be speaking both Danish and German, you likely won’t hear much English. Just take a cue from the locals and embrace the meshing of cultures, communicating instead through kind gestures, shared meals, and steins of beer.

Start with a historical stroll through the shopping district. 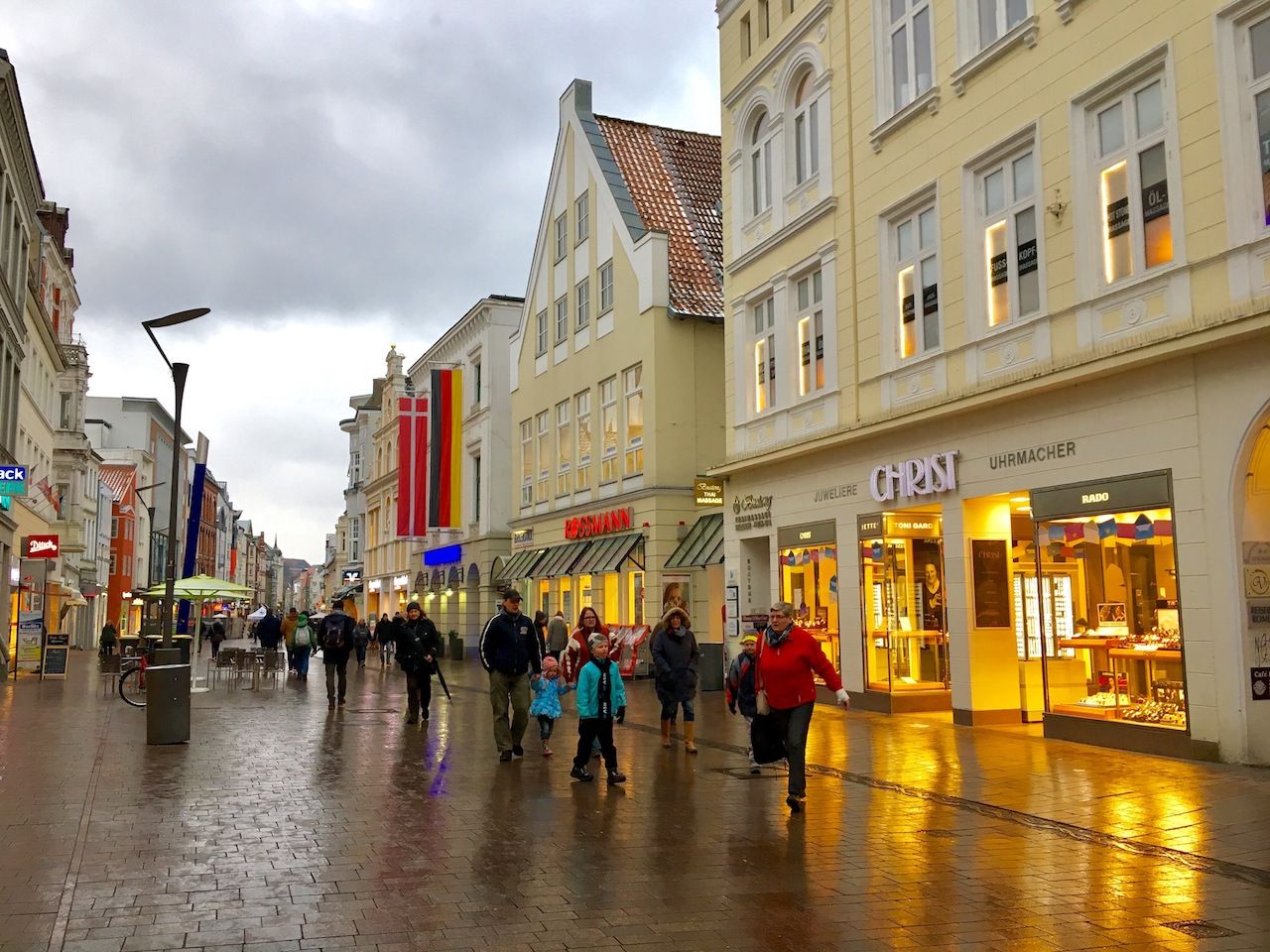 The shopping mile is the best place to see the cultural fusion that still permeates the area. At Nordermarkt, at the edge of the mile, locals convene over drinks and bites in cafes near the harbor. Danish fashion is on display in galleries next door to German markets and butchers, and tourists from across Europe and beyond mix seamlessly. The bars fill up in the early evening. During summer, live music and events happen regularly on the harbor.

Take full advantage of the area by ending your stroll at the seaport harbor, where you’ll find hundreds of boats and large ships. The harbor was the site of early interaction between the city’s Danish settlers, who founded the town around 1200 AD, and the German merchants traveling north. In the past, fishermen went after the herring in the region, and Flensburg quickly grew into a popular trade port. So popular that, until the mid-1800s, it was Denmark’s second largest port. This mix of trade further entrenched the mix of Danish and German cultures, and even today, students are taught both German and Danish in Flensburg schools.

Get a taste of the blended cultures in the city’s restaurants and pubs. 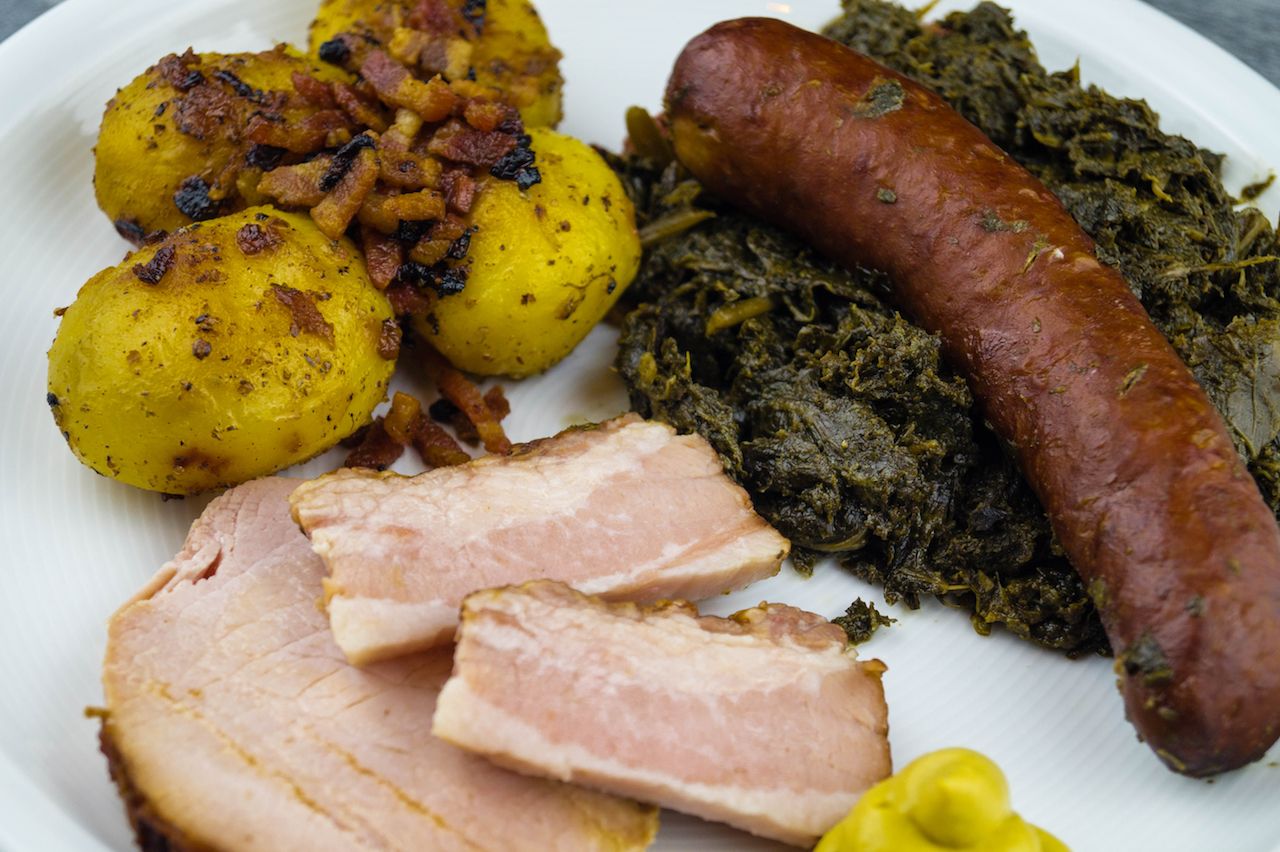 It’s no secret that you can find the best food in border towns. It doesn’t matter if that’s the border between Mexico and the US, Italy and France, or Thailand and Cambodia. It’s also true about Denmark and Germany.

Restaurant owners’ familiarization with both cultures is well represented in the city’s dining scene. Many restaurants here are fusion-centric, pulling influence from both countries. This makes for some fun menus and can also make ordering food an interesting and amusing experience. They love their schwarzauer, a type of blood soup, and rutabaga stew. Those with a sweet tooth should try rote grütze, a Danish fruit dish served with cream. The local restaurants in Flensburg are known for serving big portions, so come hungry.

Börsenkeller: A favorite restaurant among Danish people and a place where you’ll find a proper German meal served with the local Flensburger pilsener beer. The restaurant is located on the shopping mile and feels a little like a basement with rustic, old-school, traditional decor. Order meat and potatoes, and as you sit back awaiting dinner, try to decipher who around you is speaking in which language. Chances are it’ll be split down the middle.

Hansens Brauerei: Just by the harbor, you’ll find Hansens Brauerei. The restaurant brews its own beer on site, and the dining area is right next to the brewery, so you can watch the process while enjoying dinner. This is a true fisherman’s choice where you can find Scandinavian-style seafood dishes like fried herring alongside German steak and bratkartoffeln (sliced potatoes), either of which pair well with the locally brewed beer.

Hinkelstein: A restaurant where you feel welcome as soon as you walk in the door. Serving local food with seasonal specials — including Oktoberfest-themed dishes and grünkohl (kale) during winter time — Hinkelstein has built a loyal following from both sides of the border. Judging by how many customers the wait staff seems to know personally, it’s clear that Hinkelstein has its regulars. If you visit a few times during your trip, they’ll probably remember your order as well.

Flensburger Braueri: You’ll hear locals order a “Flens” at just about every drinking establishment in town, and Flensburg Pilsener is what they’re asking for. If there is one thing that the locals are proud of, it’s this beer. Visit the Flensburger Braueri if you have a few days in the city. It’s a popular stop, so pre-book your visit ahead of time.

Other ways to see the city 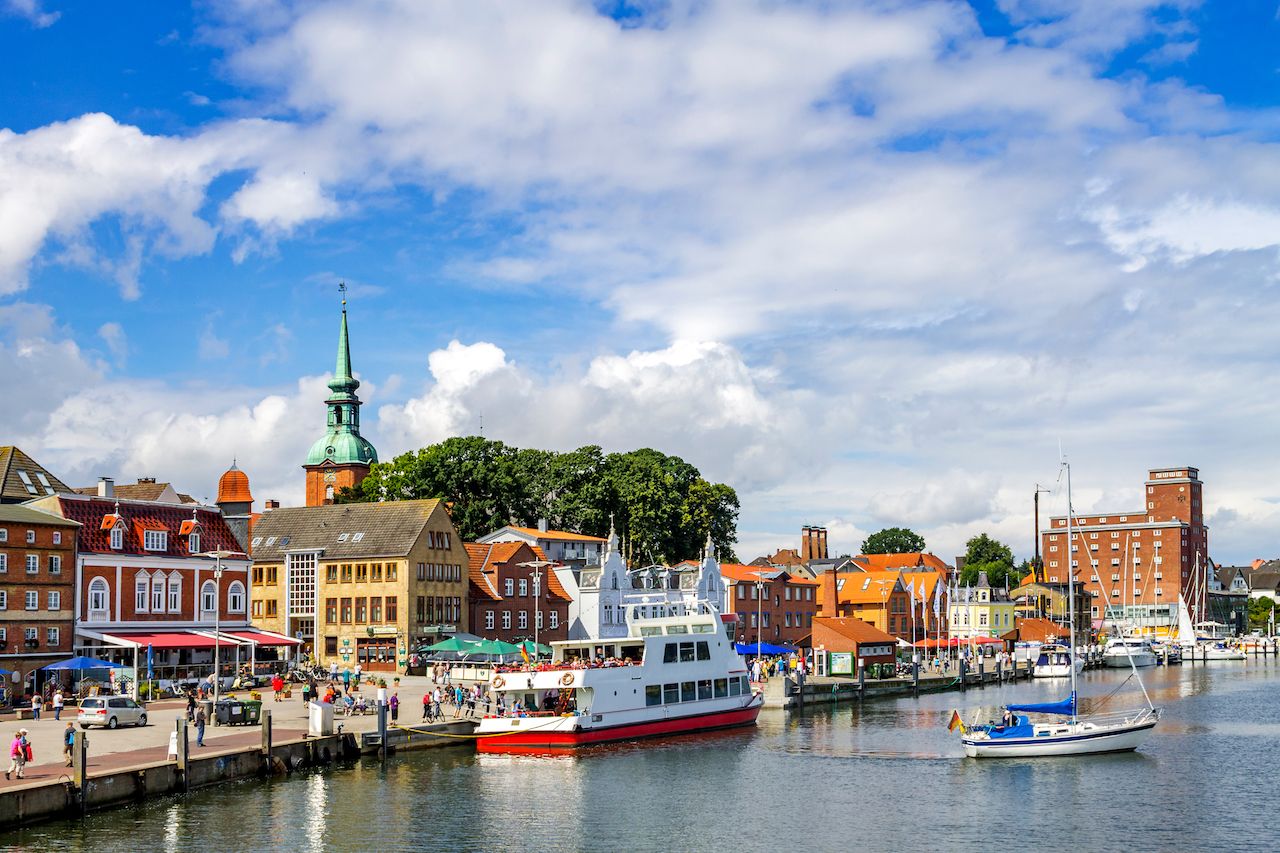 Dig into the past and learn more about how Flensburg became such a mix of Danish and German cultures at the Schifffahrtsmuseum. Here, you’ll learn about the maritime history of the Schleswig region from a Danish perspective right there on the harbor. As the harbor is the heart of the city, the museum gives you an experience of old Flensburg life, back when fishing and regional trade drove the economy. In 1412, Queen Margaret I of Denmark died on a ship in the harbor, an odd claim to fame that you’re likely to hear discussed on a trip to the museum. The interactive exhibitions focus on the marine life of the area and are particularly fun if you’re traveling with children.

If you’re in town during the holidays, visit the annual Christmas market. Germany is known for these, and Flensburg is no exception. At this time of year, there’s no shortage of glühwein (Germany’s version of mulled wine), waffles, and German sausages, and the atmosphere is cozy and warm. Just take care when drinking glühwein, as it’s a lot stronger than it tastes. The market is frequented by Danes and Germans from in and outside of Flensburg, along with tourists visiting the area.

No matter how you choose to explore Flensburg, whether through food or through history, it’s a border town you don’t want to miss.

CultureSpend a Weekend in Aarhus for a Deeper Look at Life in Denmark
Tagged
Culture Food + Drink Insider Guides
What did you think of this story?
Meh
Good
Awesome