On September 8, 2022, Boston legends Aerosmith celebrated their 50th anniversary with a homecoming gig at Fenway Park. While this may or may not be the final Aerosmith show, it is their only North American date currently scheduled. Whether you plan to attend the gig or not, there are still dozens of places in and around Boston steeped in Aerosmith history. We picked 11 places in Boston for fans of Aerosmith that they can easily visit without a car.

Here is a chronological list of apartment buildings, hotels, universities, and train stations that have been immortalized by the undisputed biggest rock band to ever come out of Boston. 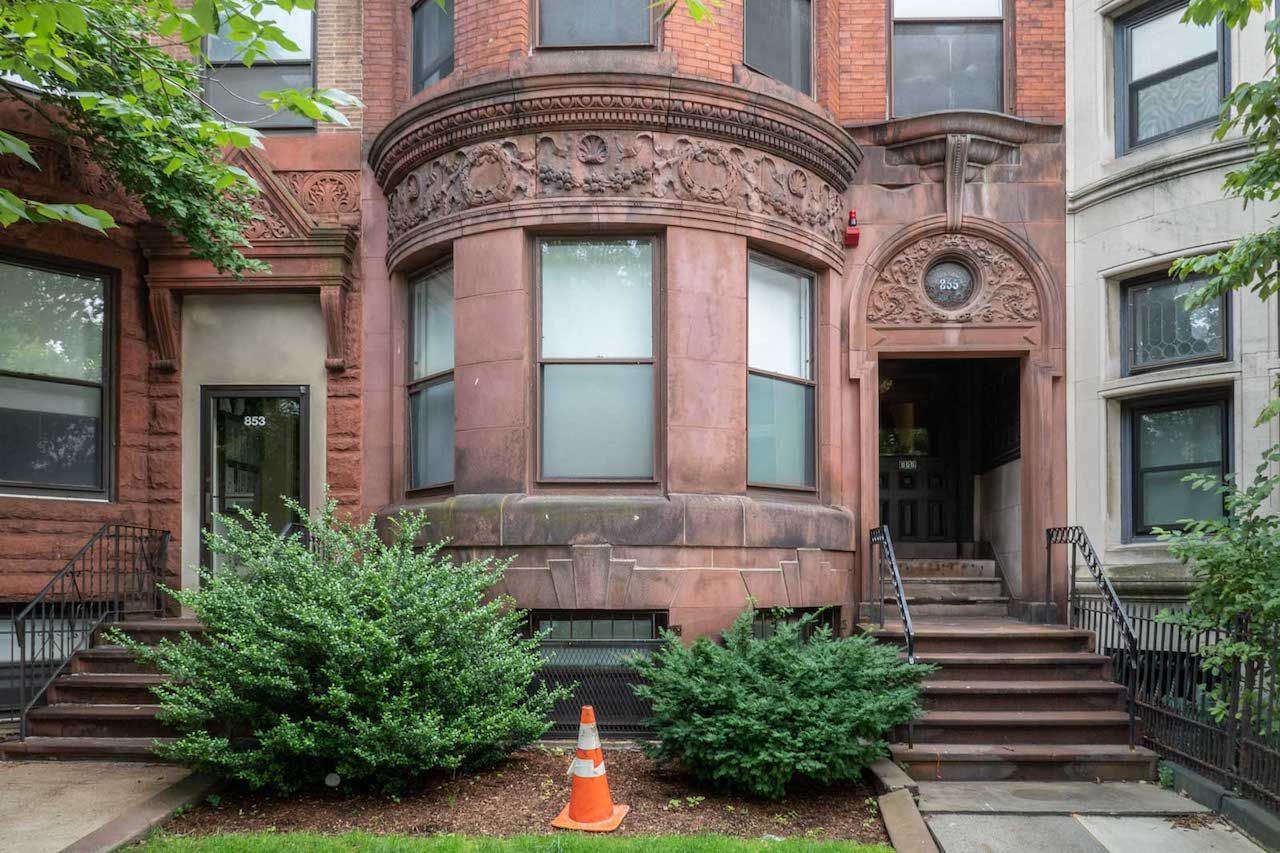 After being asked not to come back to the now-defunct Chamberlayne Junior College for having a girl in his dorm room, Joey Kramer got an apartment at 855 Beacon Street. In his 2009 autobiography, he referred to the address as “a bong’s throw from Boston University.” It was early 1970, and Joey was struggling to pay the rent on the $56 per week he earned working in the Prudential Insurance duplicating department.
The brownstone building near Fenway Park is still standing, but the peace sign that Joey proudly hung in the window facing Beacon Street is no longer there. Please be respectful as this is a private residence. 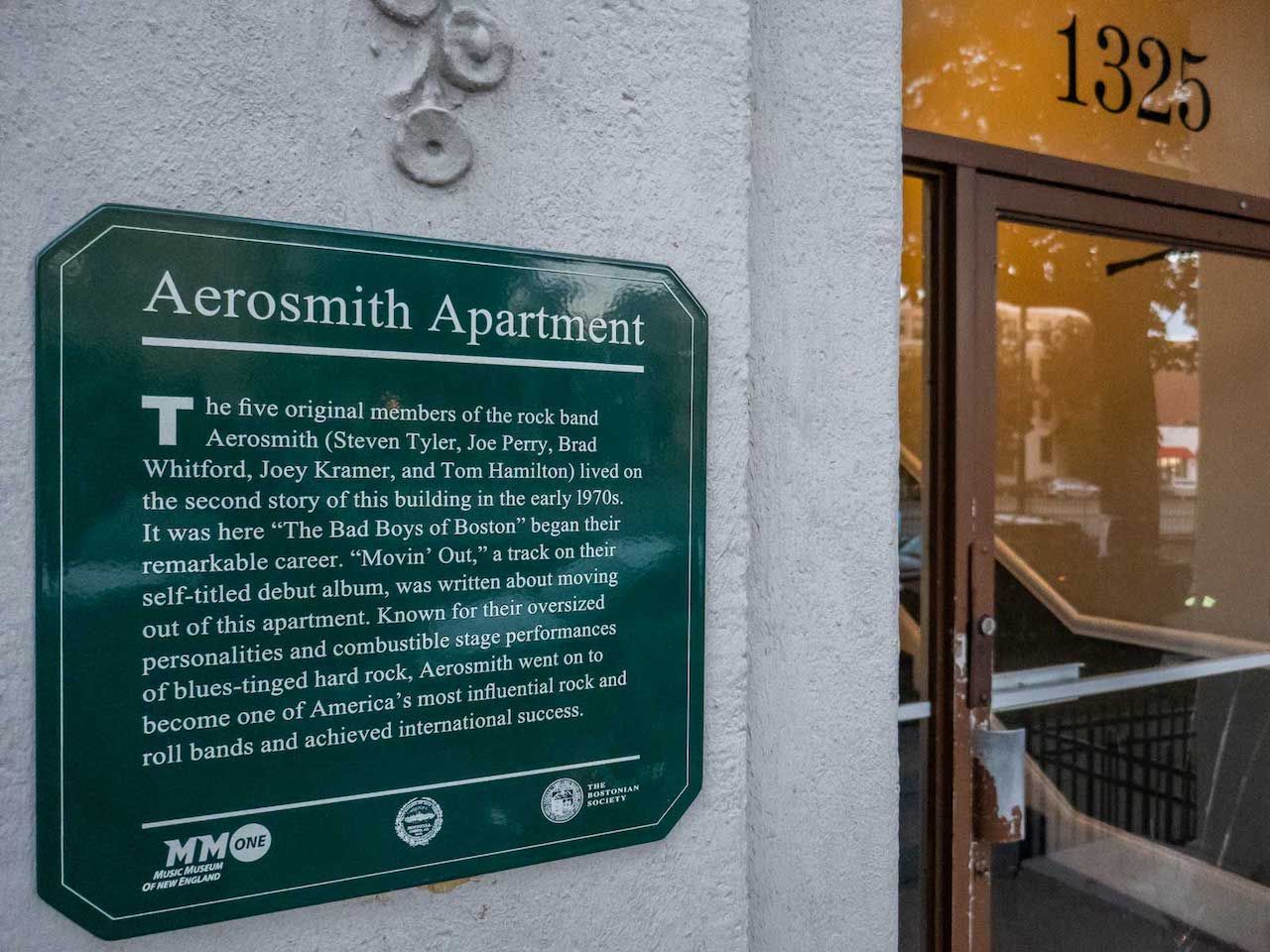 1325 Commonwealth Avenue is listed on nearly every rock-and-roll road map. The Aerosmith members settled here after arriving in Boston. Tyler and Perry wrote their first song together (“Movin’ Out”) on a waterbed in the living room. In his 2014 autobiography, Joe Perry refers to the Allston neighborhood as “the student ghetto.” And many locals still think of it that way.

There’s a green plaque outside the main entrance marking perhaps the most important spot in Boston for fans of Aerosmith. In November 2012, the band returned here to play a free show promoting their last studio album, Music From Another Dimension. 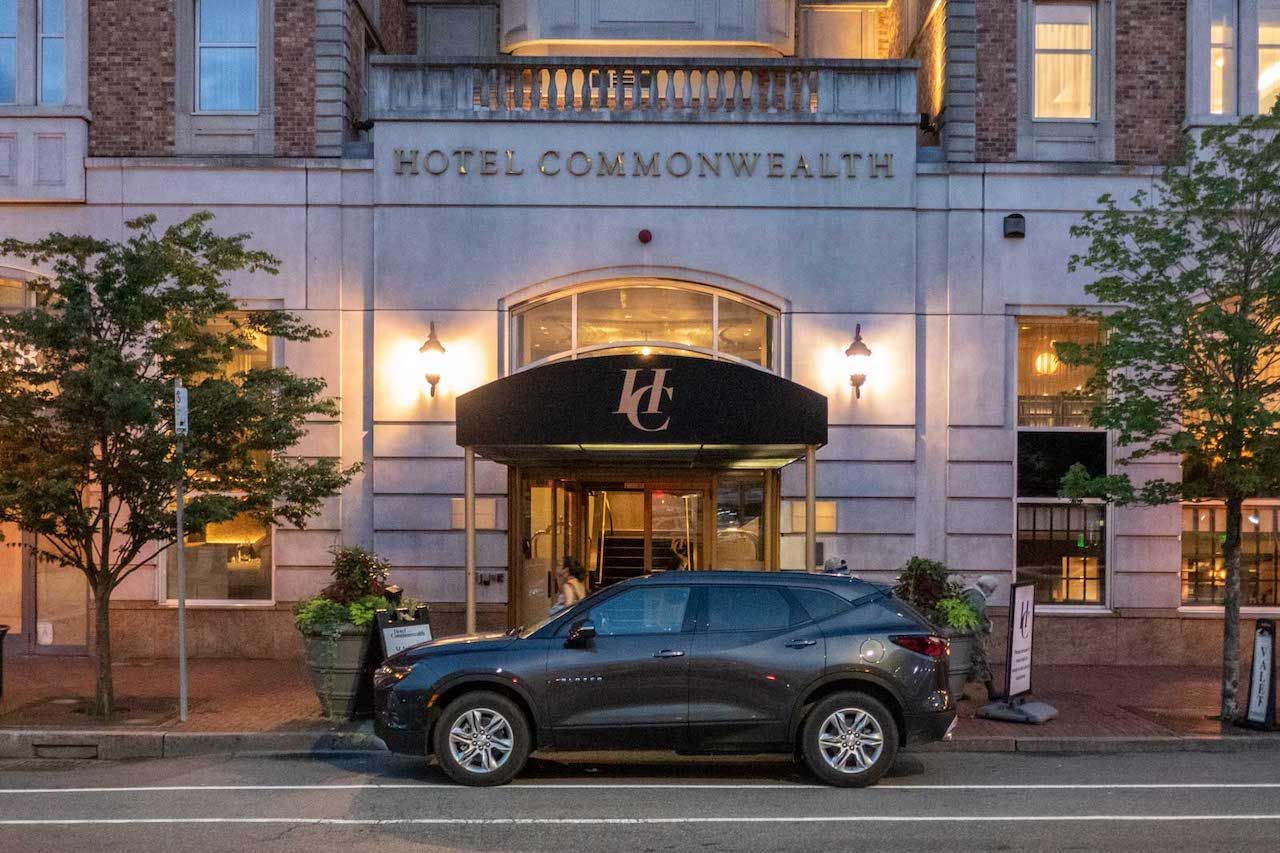 The first proper Aerosmith rehearsal space was in the basement of the girls’ dorm at Boston University. In his 2014 autobiography, Joe Perry mentions 500 Commonwealth Ave as the address. Today, the Hotel Commonwealth occupies the building at the corner of Commonwealth and Kenmore. According to Steven Tyler, they would rehearse there until 4:30 PM and then catch a ride back to the apartment so they could be home in time to watch The Three Stooges at 5 PM. Nowadays, the B trolley line will get you from one spot to the other in under 20 minutes. 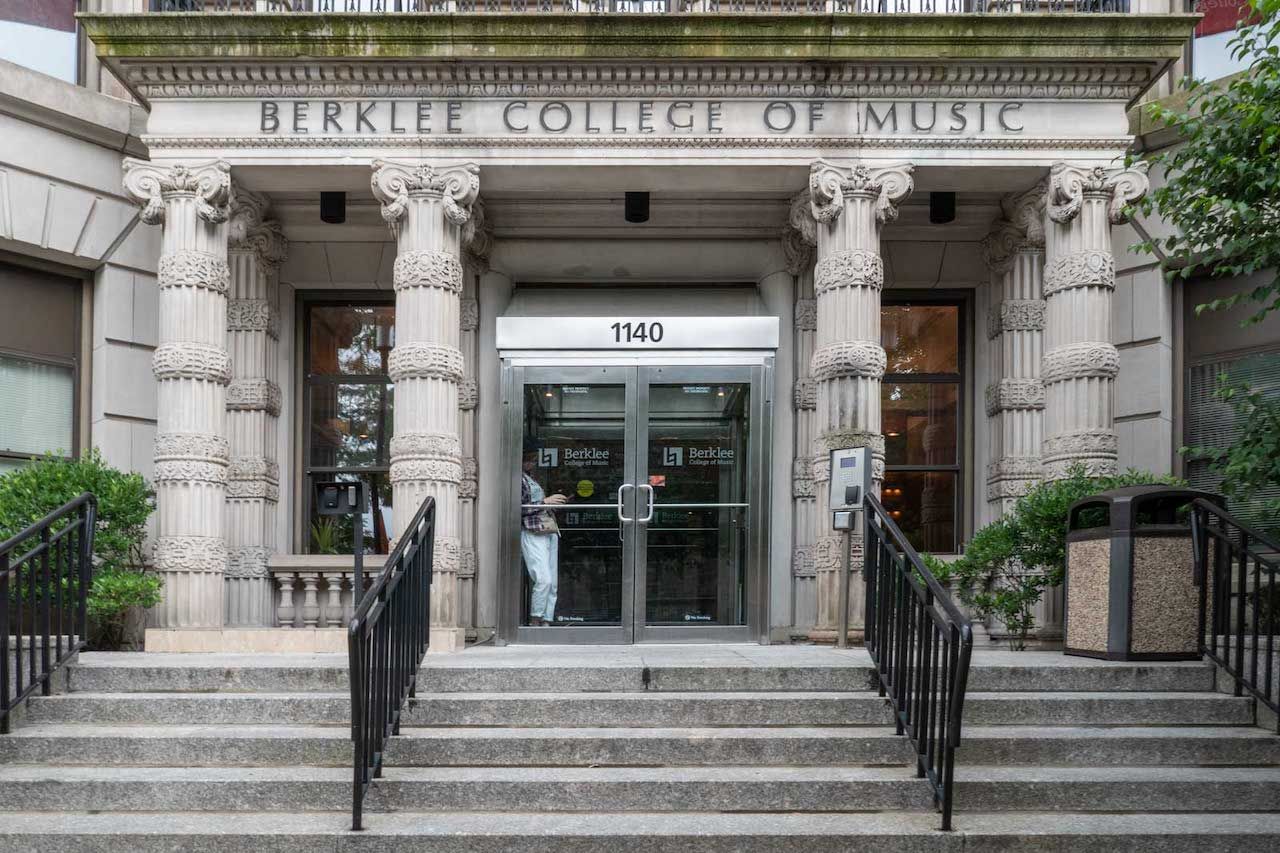 John Mayer, Quincy Jones, and Aerosmith have more in common besides being famous multi-grammy award-winning musicians. Like Mayer and Jones, Aerosmith guitarist Brad Whitford is a graduate of the world-renowned Berklee College of Music. Since its inception, 125 Berklee alumni have received more than 300 grammy awards.

Whitford graduated in 1971, which is the same year that Joey Kramer quit the college. 1971 is also the year Whitford joined Aerosmith, completing the lineup that still endures 50 years later. Berklee does not offer tours to the general public, although you can visit their bookstore. 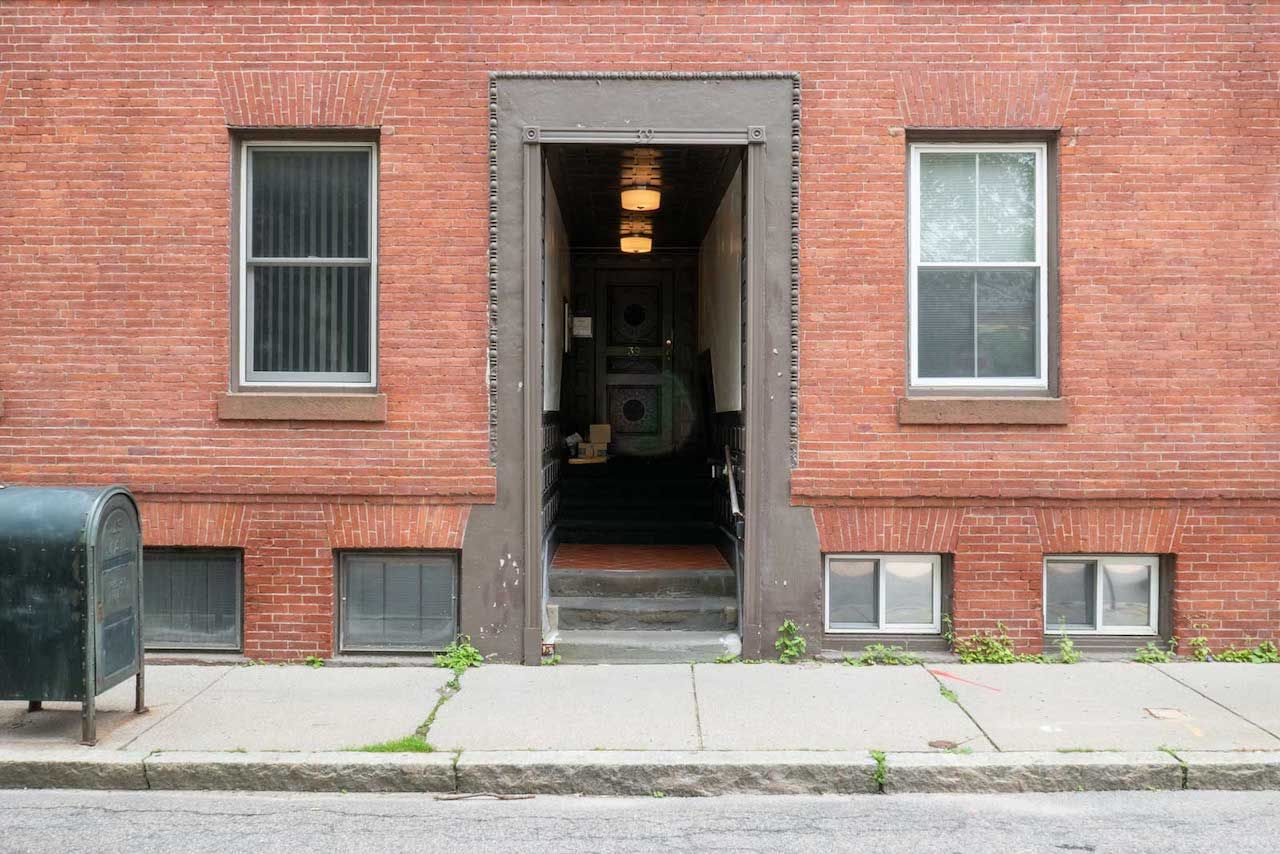 After being evicted from the more well-known Aerosmith apartment, the band moved into another place at 39 Kent Street. By that point, Joe and Joey were living with their girlfriends. The rest of the band stayed in this red brick building at the corner of Webster and Kent until they started making rock-star money.

According to Steven Tyler’s 2004 autobiography, at that time the band were still just getting by. He described his room at 39 Kent as a “psychedelic cave.” It was during this period that they made some rough recordings of songs like “Walkin’ the Dog” that would eventually appear on their eponymous debut album.

Please be respectful as this is a private residence. 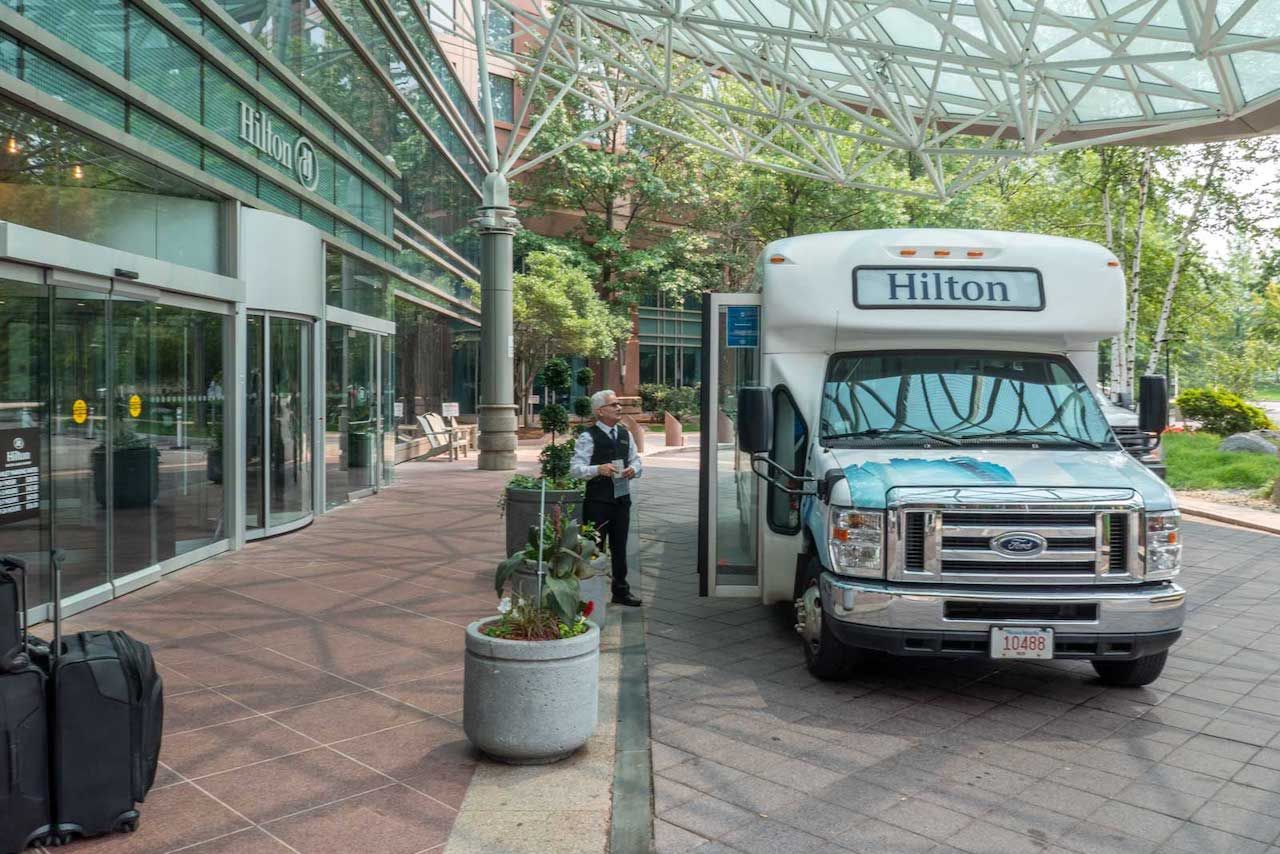 In Steven Tyler’s 2004 autobiography, he mentions the band staying in “the Hilton by the airport” to finish their first album. According to Tyler, he finished the “Dream On” lyrics there. While the original Hilton was destroyed in the late 90s to make way for the road that now leads to Logan International Airport, Tyler has been spotted at least once in the 21st-century Hilton by the airport. The daytime valet guy has been at the Hilton Logan for decades and recalls sharing the elevator with Tyler around the same time that Aerosmith played a free show in front of their Allston apartment building. 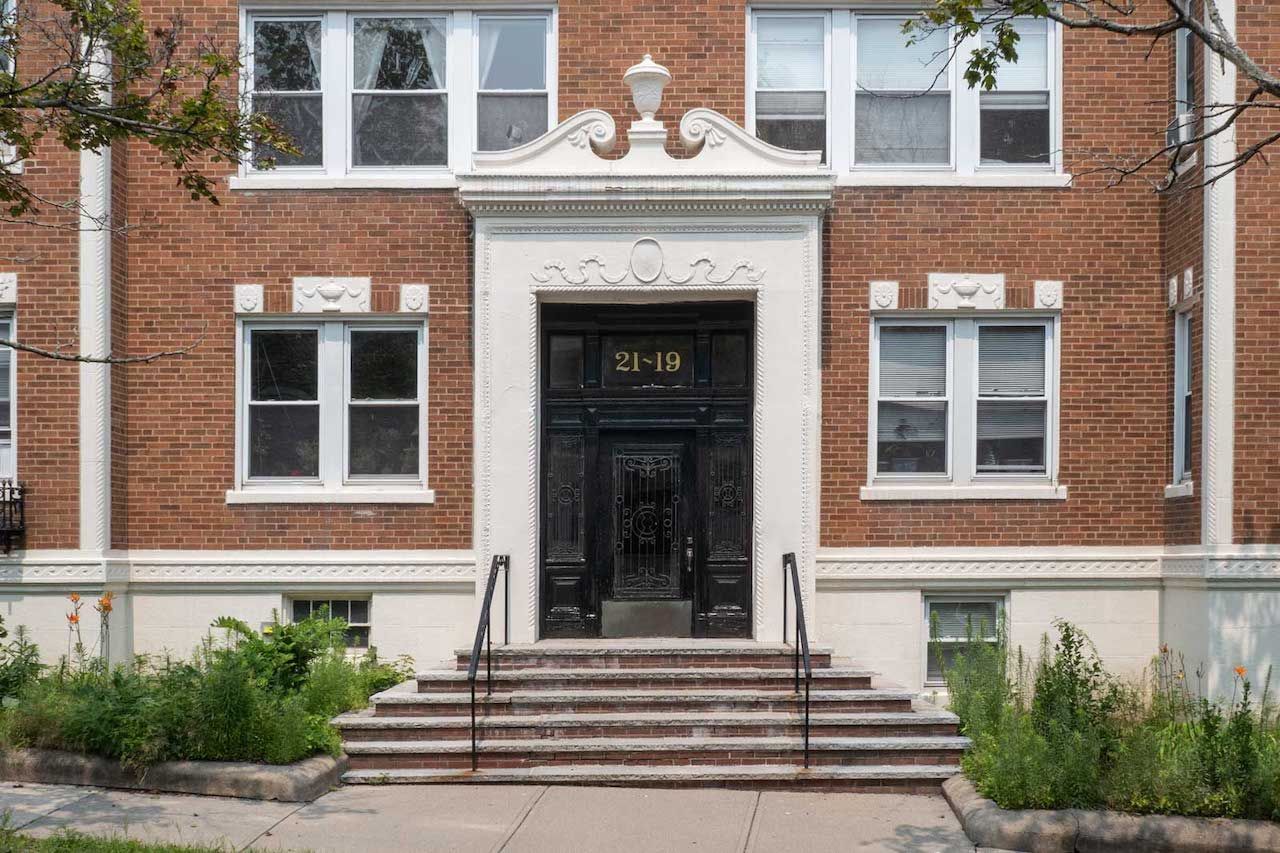 By the mid-1970s, Aerosmith had reached its first peak. In his 2009 autobiography, Joey Kramer describes getting a check for $275,000 and buying an $8,000 Corvette with $100 bills. He “needed a place to hang his hat in Boston” and settled at 21 James Street in Brookline. Joey describes this period as “life on the edge, every day.” He had a Playboy Bunny girlfriend and started every weekend by purchasing an ounce of cocaine along with a quart of Stoli vodka. From there, he claims that he would watch three days pass by from the same spot.

The apartment was on the first floor. Please be respectful as this is a private residence. 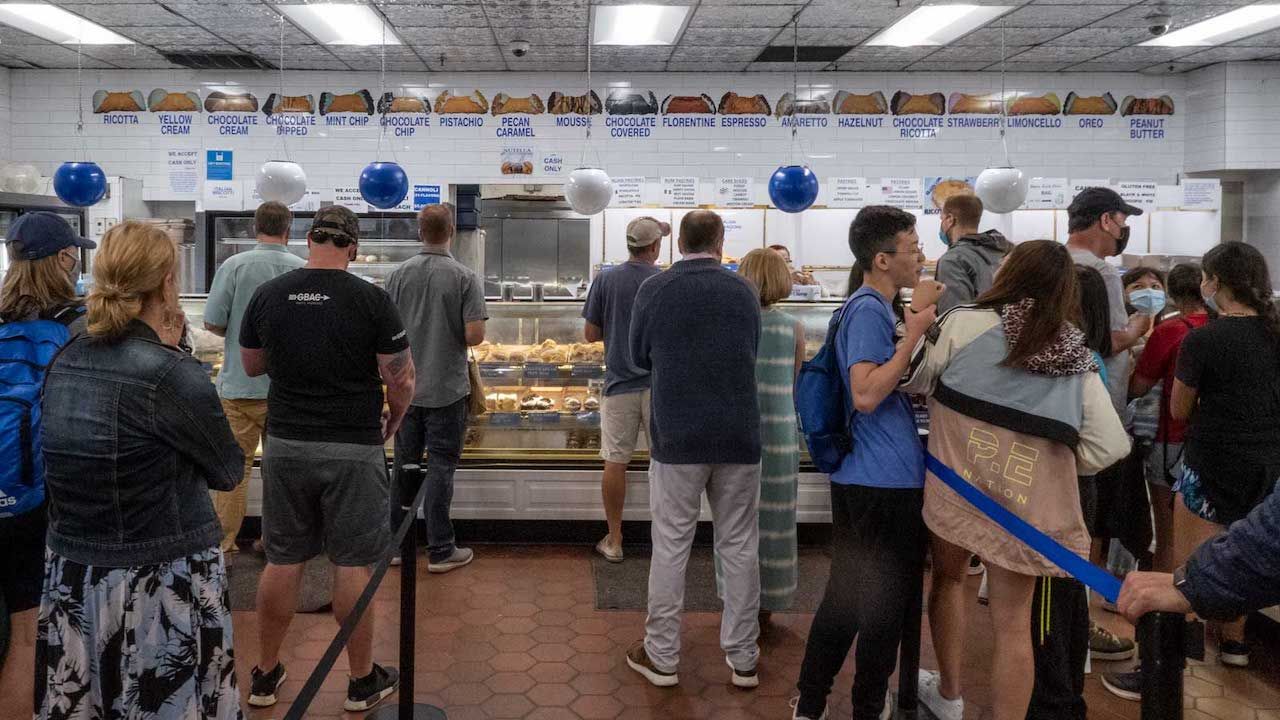 By the early 1980s, Joe Perry was out of Aerosmith and playing 100-seat venues with the short-lived Joe Perry Project. After separating from his first wife, he moved to the North End with the help of future Aerosmith manager Tim Collins.

According to his 2014 autobiography, Joe lived on cannoli from Mike’s Pastry during his time in the North End. He did not mention whether or not he waited in line like everyone else. Nowadays, you can’t walk along Hanover Street without noticing the long line of eager patrons waiting to sample one of the 19 different cannoli flavors. 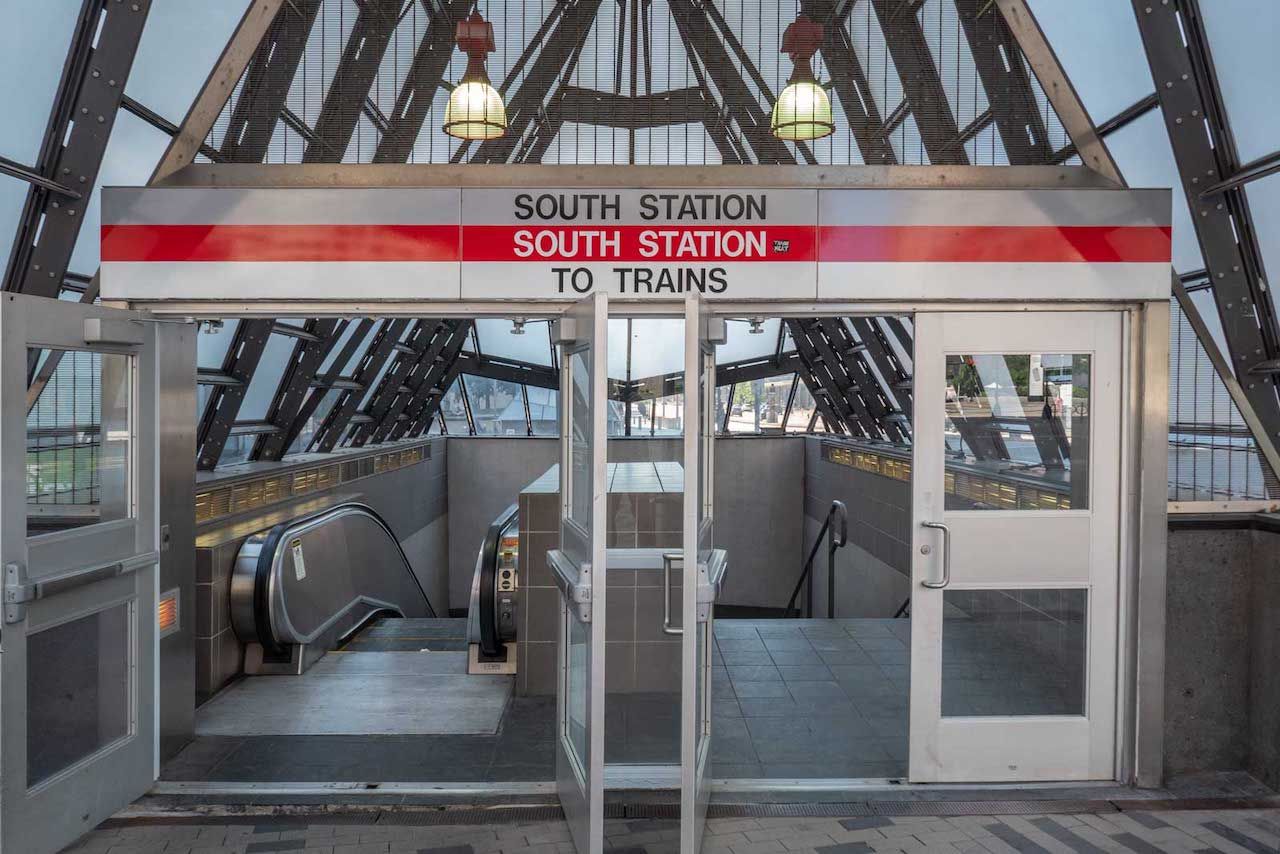 The final track on the Joe Perry Project’s sophomore album is a nod to Boston’s main bus and railway station. In “South Station Blues,” Perry sings of “Sittin’ at the railway station, destination far behind.” While 1981 marked a low point in Joe’s professional career, “South Station Blues” was one of the few Project tracks to make it onto the 1991 Aerosmith compilation, “Pandora’s Box.”

Along with North Station and Back Bay, South Station is one of the main railway stations in Boston. The red and silver MBTA lines stop here, as do all Amtrak lines passing through Boston. Unfortunately, we don’t know which platform Joe was referring to in the song. 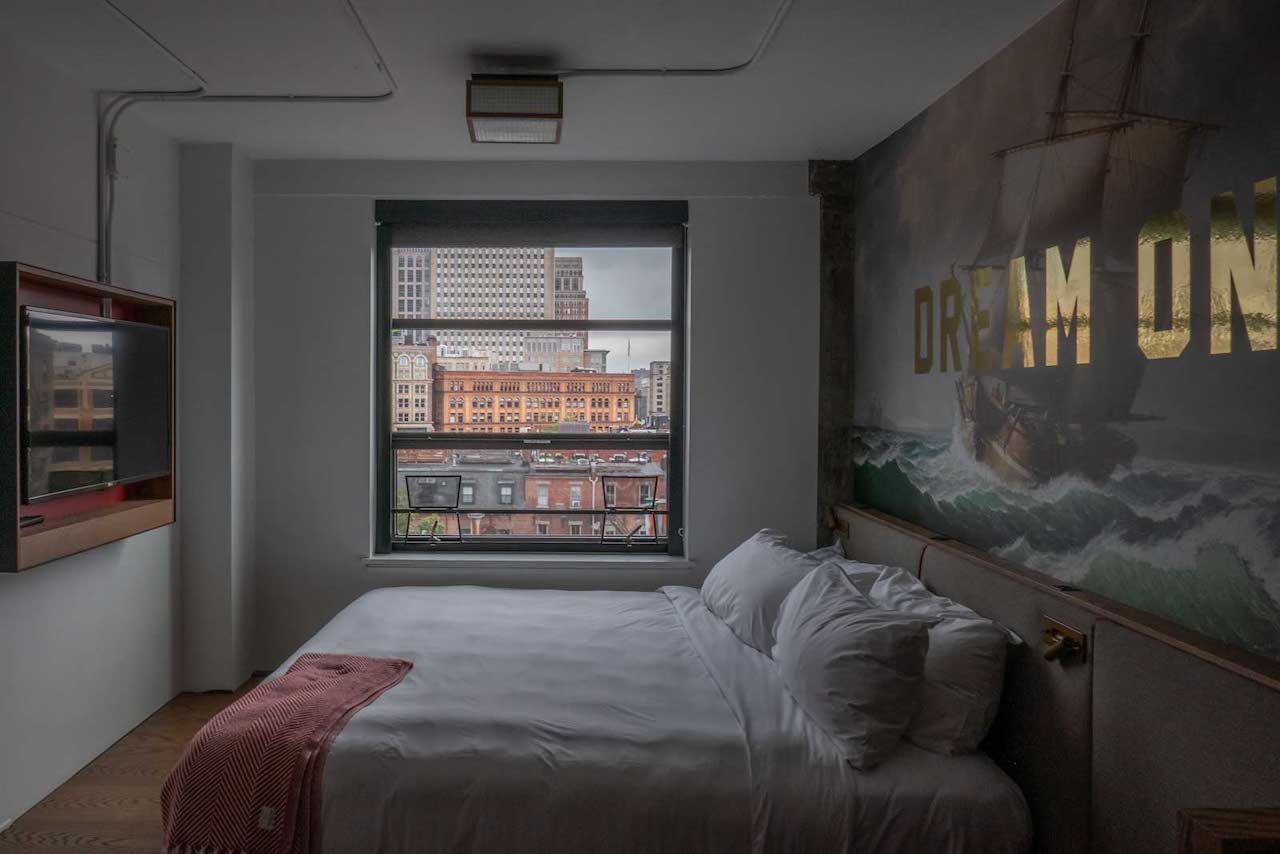 The “Dream On” lyrics may have been finished at the “Hilton by the airport,” but today, the words “Dream On” adorn the wall in many of the rooms at the South End Revolution Hotel. This artsy Provenance hotel is less than a half-mile from Back Bay Station.

If you’re planning to do this itinerary, we suggest staying here, as you’ll have convenient access to Amtrak as well as the trolley and orange line. From the Revolution, you can visit any place in this list (except for the Hilton) without a car. 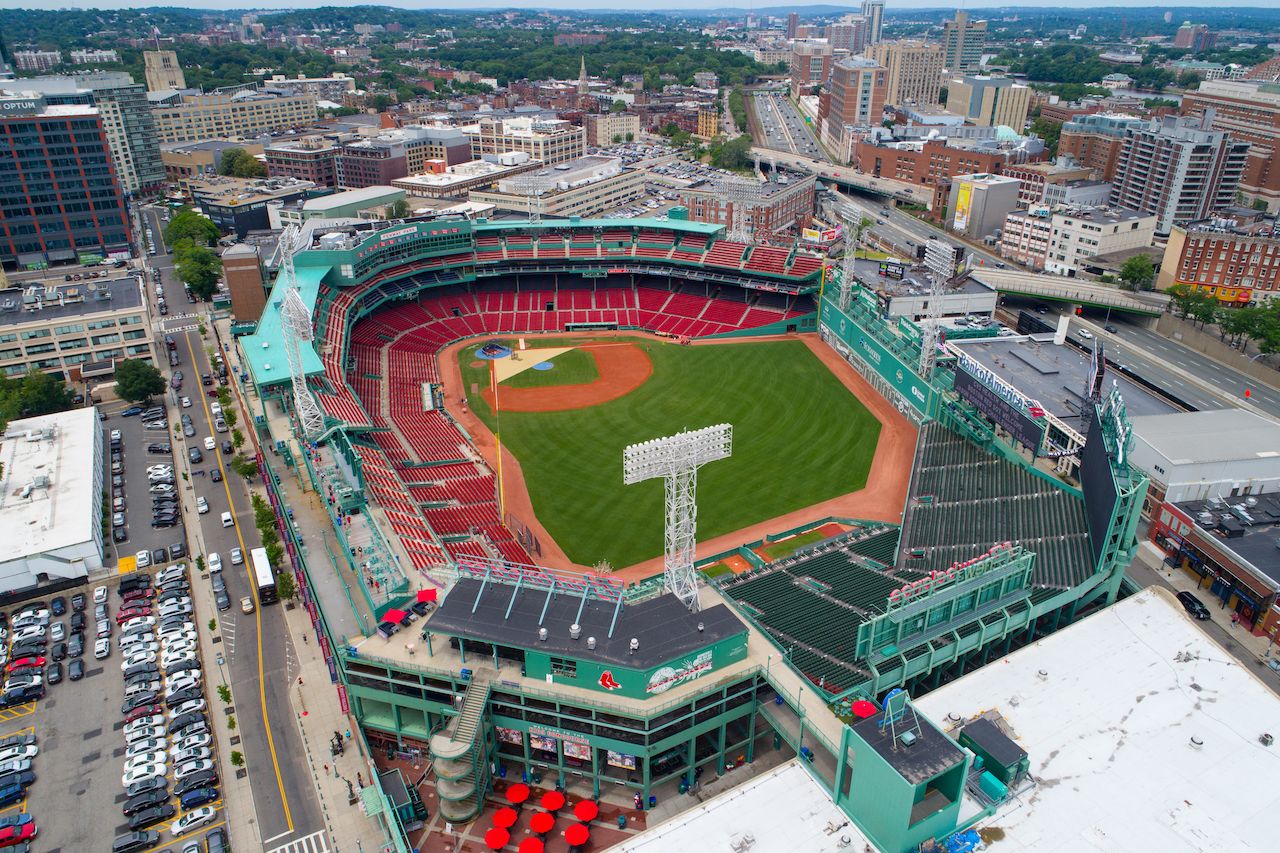 On September 8, 2022, Aerosmith will celebrate their 50th anniversary with the band’s first performance at Fenway Park since 2010. As they did in 2010 with The J. Geils Band, they’ll be sharing the bill with another legendary Boston band. This time, Extreme will be the opening act.

While this is not being billed as a proper farewell tour, fans of Aerosmith should note that it is the last (and only North American) date on their current tour schedule. By the time the show happens, everyone in the band will have turned 70. Steven Tyler will be 74 when he fronts the band for perhaps the final time before a hometown audience.