Brighton is sometimes referred to as “Little London by the Sea.” Situated on the south coast of Sussex, Brighton is a mere 50 minutes from London by train, which means tourists usually just go for a day trip — if they bother going at all. But you should consider basing yourself in Brighton instead. You’ll have the best of both worlds — the myriad of attractions that Brighton has to offer and easy access to The Big Smoke — along with more affordable accommodation, a slower pace of life, and of course, seaside views.

With its quirky stores, cool coffee shops, and lively nightlife, there is much to keep you occupied in between jaunts to London. Brighton’s chilled-out seaside vibe is absent in the capital, making it a more relaxed environment in which to stay while in the UK. Here’s how to leverage a sojourn in Sussex and flip the tradition of a “day trip to the coast” on its head.

Indulge in some traditional seaside fun. 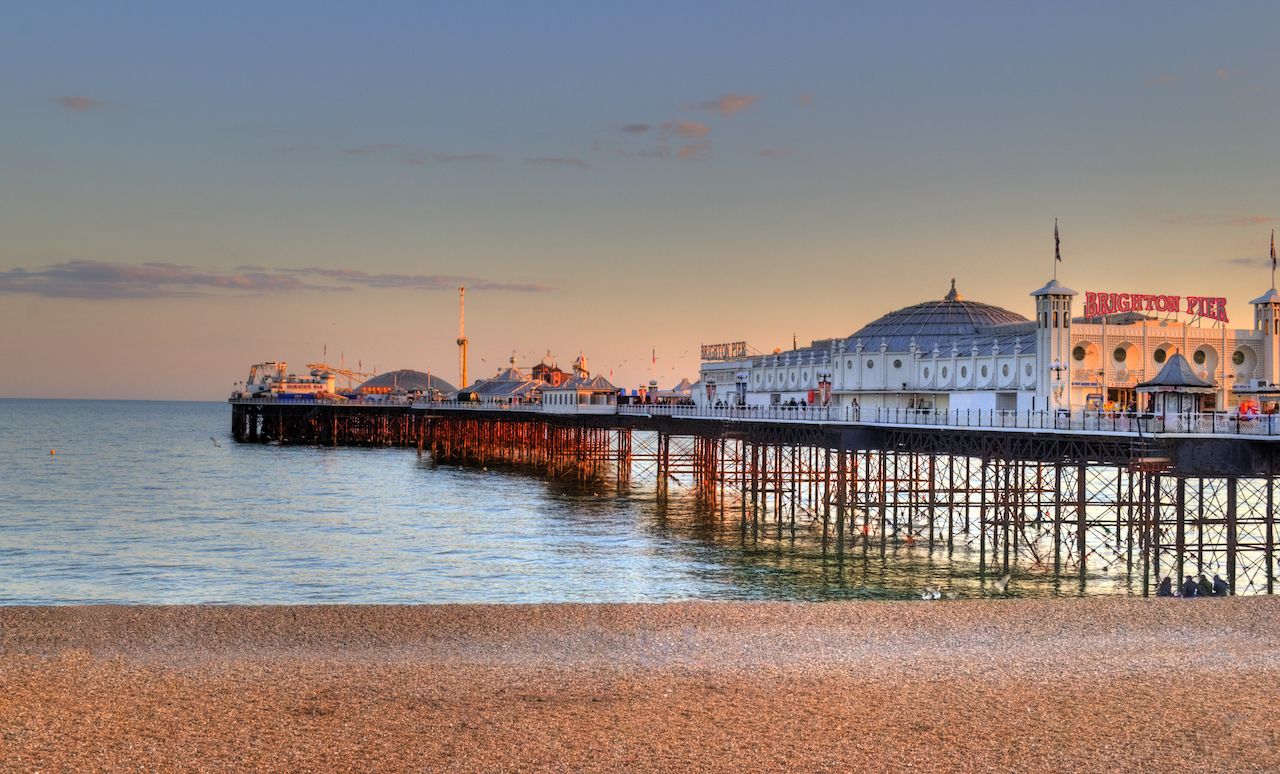 Brighton is an appealing concoction of traditional seaside delights. Upon arrival, head on down to Brighton’s seafront. Whether it’s a stroll along the prom or a thrilling fairground ride on the end of the Victorian Palace Pier, Brighton is all about recreation and fun. In the summer, join the daytrippers who flock to the pebble beach to soak up the sun and take a dip in the chilly English Channel. Enjoy a cold beer and a bite to eat at one of the many bars along the beach or take a whirl on the old-fashioned carousel.

Drink Champagne in the sky. 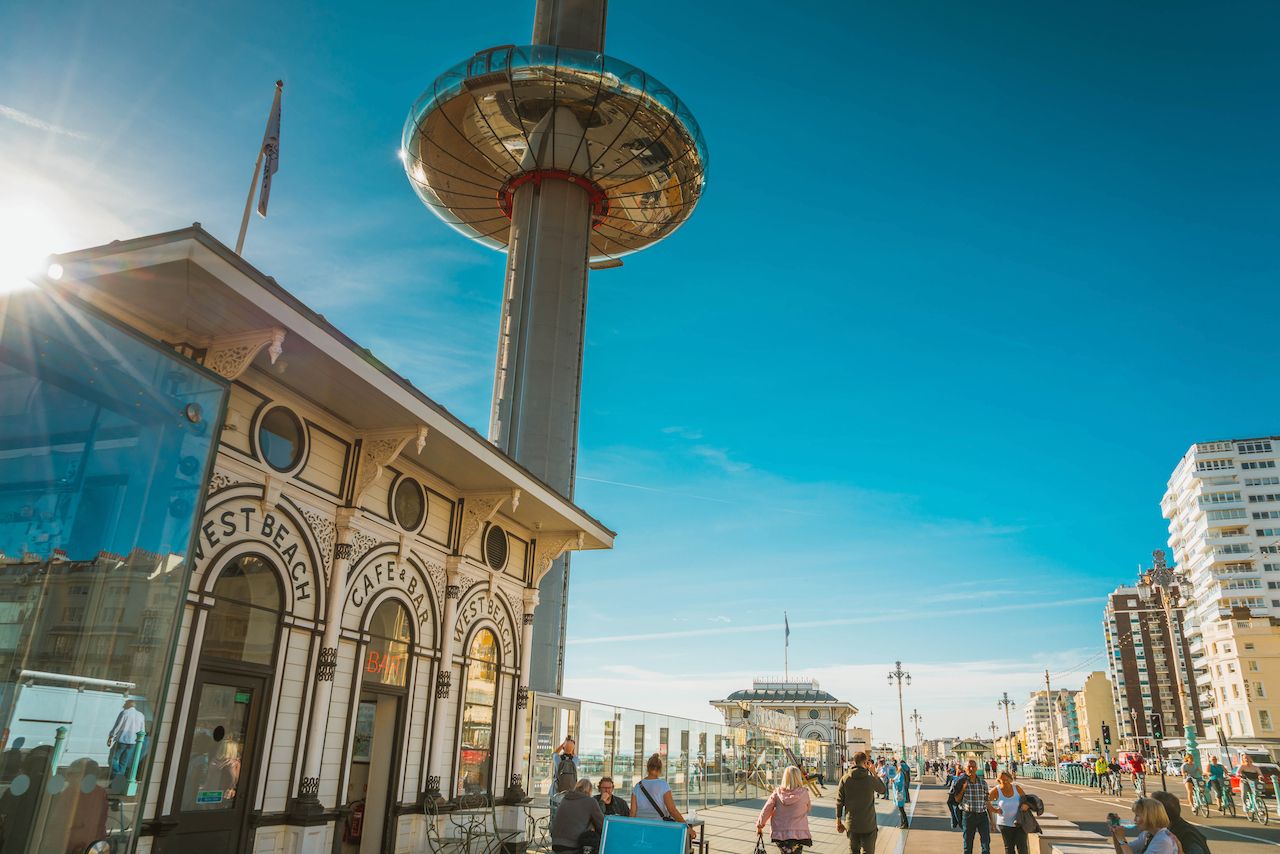 Take a ride on the i360, one of the UK’s tallest towers, and get a bird’s-eye view of Brighton and the south coast from 531 feet above the ground. Located on the seafront, the tower opened in 2016 and is one of Brighton’s main tourist attractions. Enjoy a decadent glass of Champagne at the Sky Bar as you make the smooth ascent in a futuristic glass viewing pod. The best time to take a flight is as the sun goes down and the twinkling lights of the city come up. You can even take a yoga class amongst the clouds or abseil down the tower, taking in the panoramic views as you go.

Check out one of England’s premier art scenes. 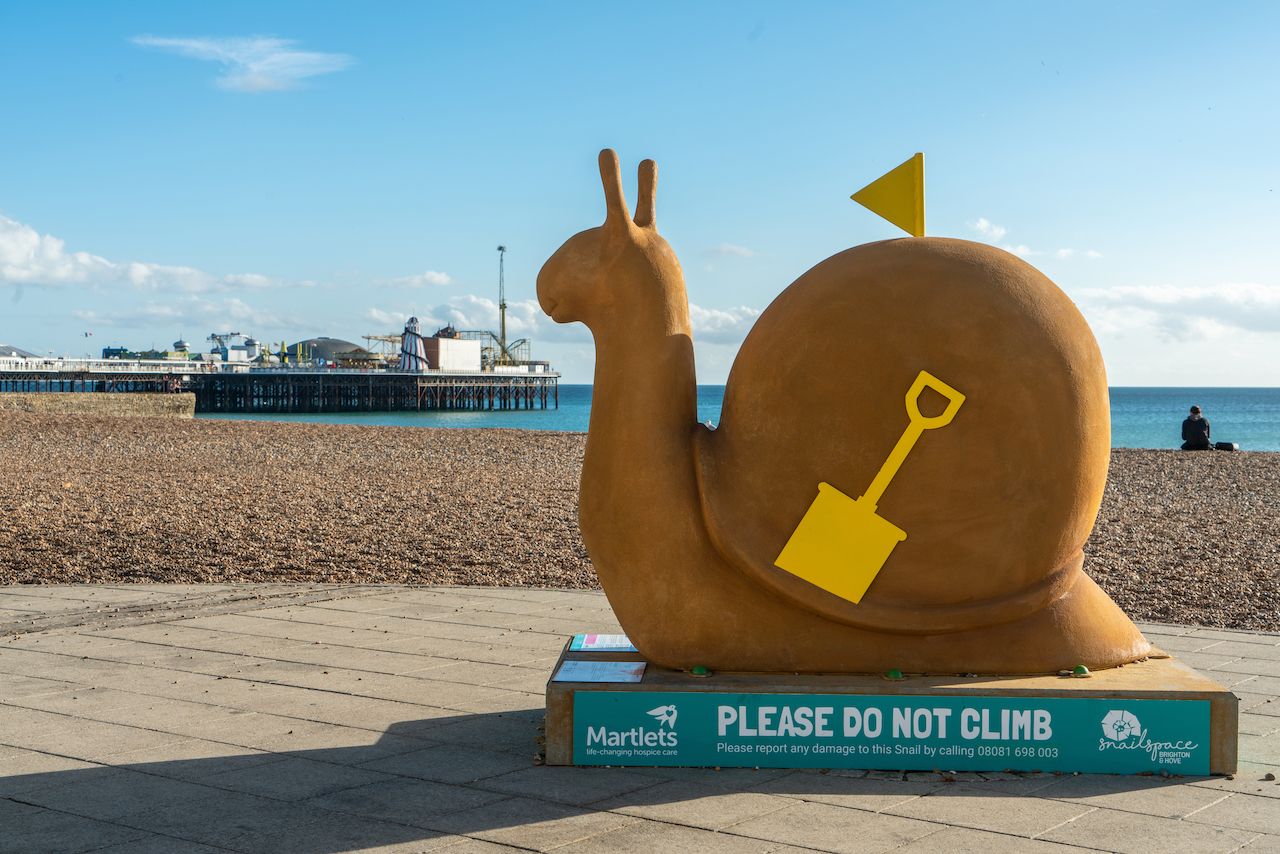 Brighton is brimming with artists, writers, poets, and musicians, and on any given evening, there is an abundance of events to choose from. See a West End show at a fraction of the price you would pay in London, take in a poetry reading, or listen to a folk musician playing in the basement of a pub. Each May, the city plays host to Brighton Festival, the largest arts festival in England and a particularly vibrant time to visit. Street musicians play in the trendy North Laine, Shakespeare pitches up in the park and every pub, club, and cafe becomes a venue for a cultural event. If you have an appreciation for art, take a walking tour of the open houses and check out how the city’s creative residents display work in their homes. 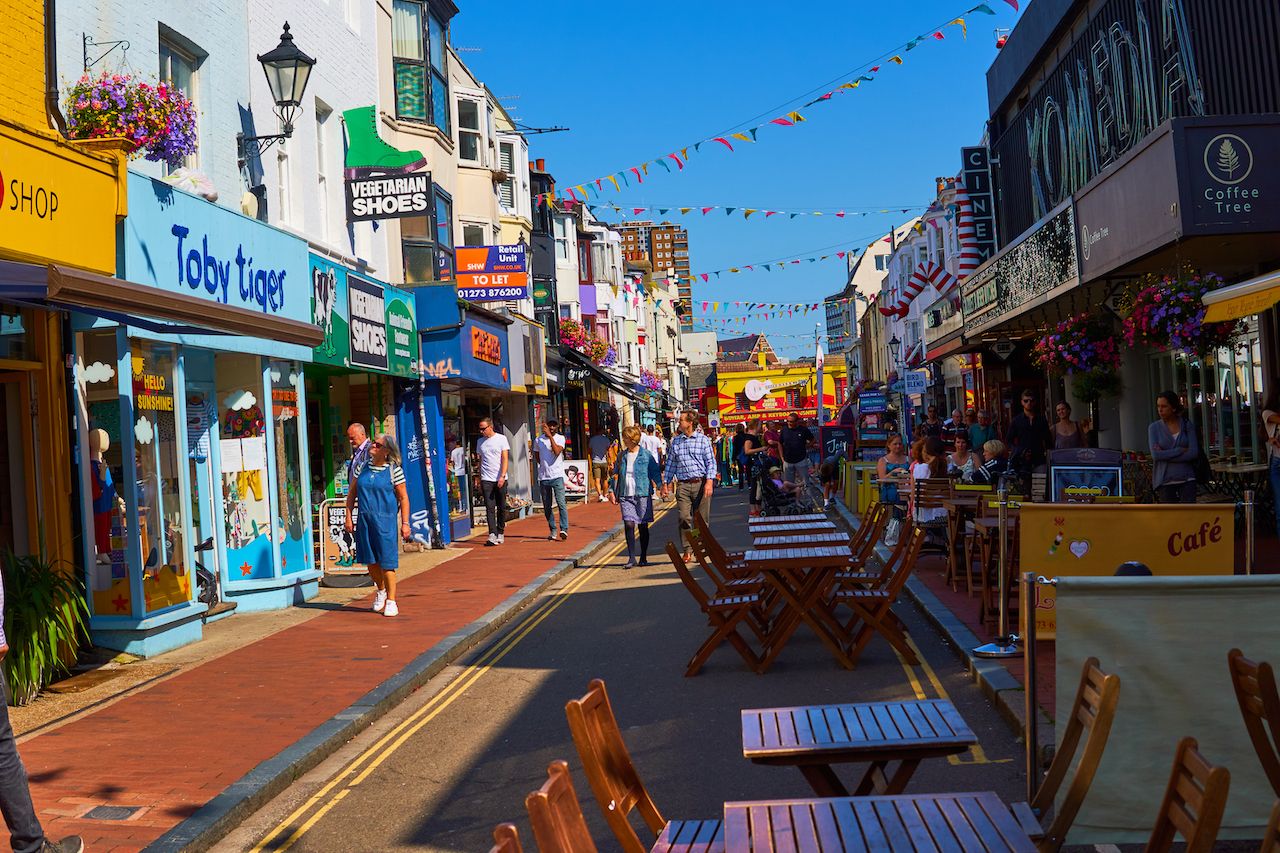 North Laine is Brighton’s bohemian hub. With an abundance of off-beat indie stores and funky cafes, the area is a refreshing alternative to the soulless chain stores which dominate many a city center across the UK. Explore the narrow streets and discover colorful street art hidden in nooks and crannies or peruse the knickknacks in Snooper’s Paradise, an indoor flea market and Brighton institution. Enjoying an alfresco drink at one of the many coffee shops is an opportunity to watch the world go by and perhaps spot one or two of the city’s colorful characters. On Saturdays, Upper Gardner Street is the scene of an eclectic market where you can buy anything from antique clothing to innovative pieces designed by local artists.

Eat, drink, and dance until dawn. 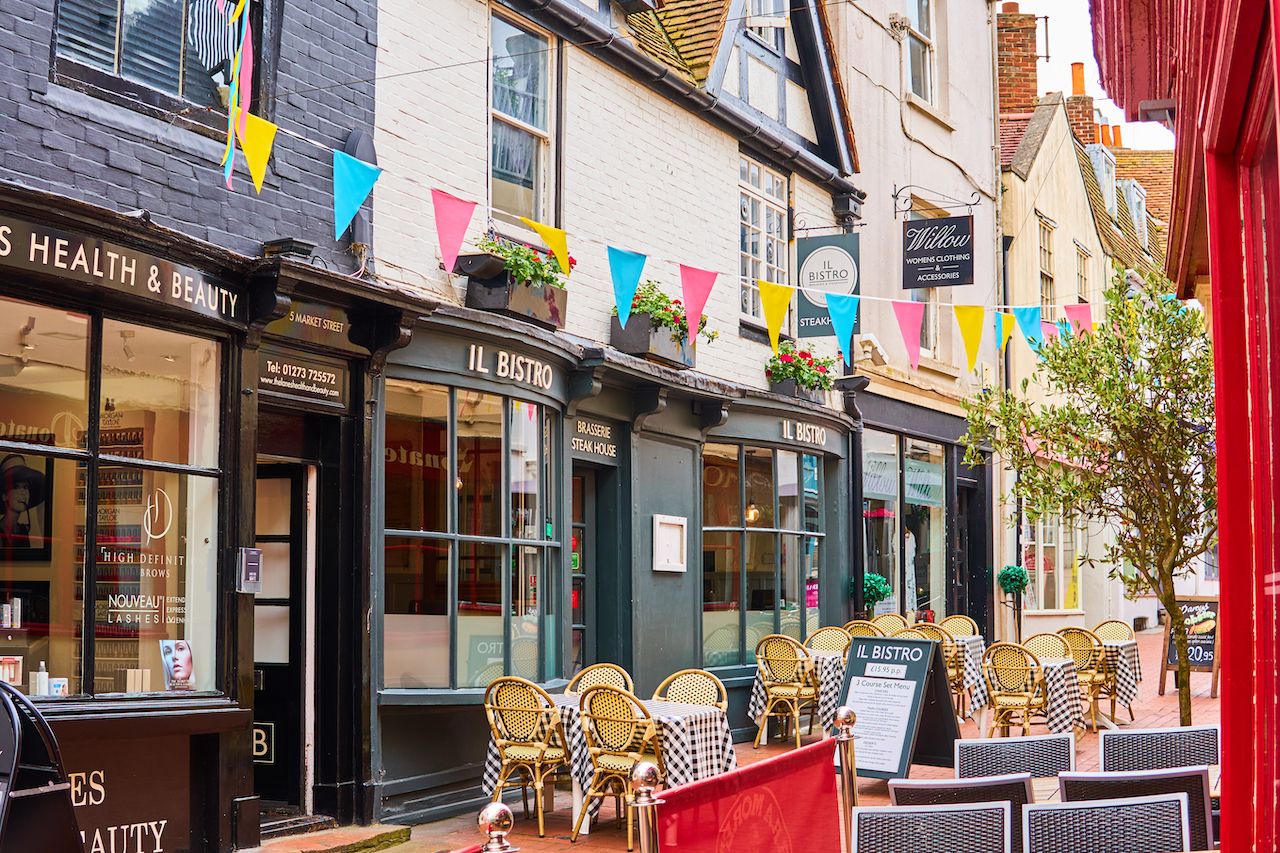 Brighton’s nightlife attracts partygoers from all over the country, with its free-spirited attitude and large LGBTQ population creating an inclusive social scene. Whether your idea of a wicked night out is watching a drag queen belt out show tunes, dancing the night away to trance music, or taking in a burlesque show, a boozer on every street corner ensures that you don’t have far to crawl between pubs. From the Plotting Parlour, a cocktail bar which transports you back to the 1920s, to the Prince Albert, a live music venue with a huge mural of dead musicians on its exterior, watering holes in Brighton are abundant and diverse.

Both within and beyond the bar scene, Brighton puts out some good food to go with all that liquid courage. If you love seafood, The Salt Room is a cutting-edge restaurant offering locally sourced seafood served with a view of the English Channel. There’s also plenty of veggie eateries, which in a very meat-and-potatoes country makes Brighton a haven for vegetarians. Food for Friends is an award-winning vegetarian restaurant whose delicious dishes appeal to carnivores as much as non-meat eaters. 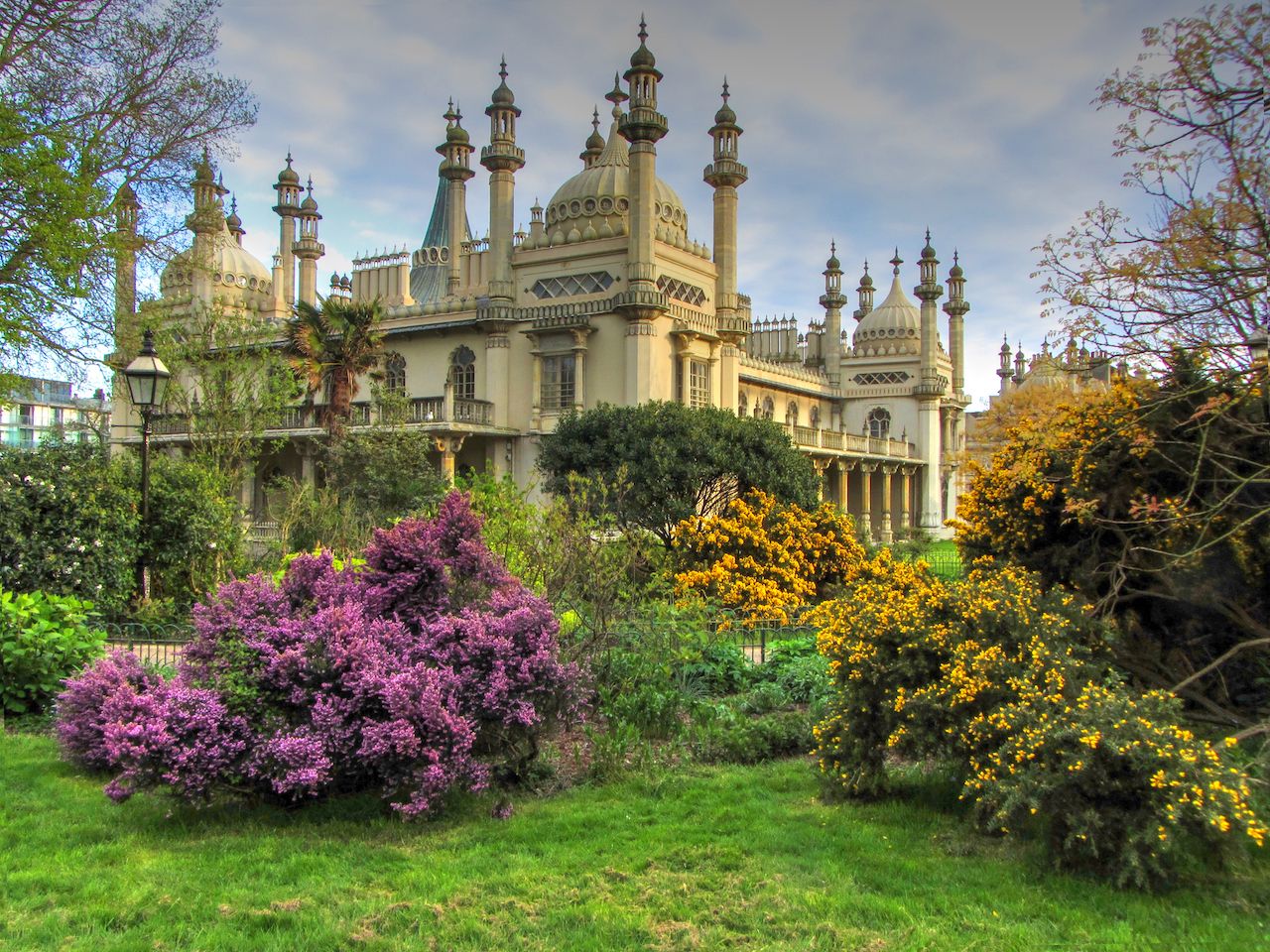 The resplendent Brighton Pavilion should look more at home in Rajasthan than at the Sussex seaside, yet somehow it fits in just fine. Built in 1823 as a pleasure palace for playboy Prince Regent (who was later crowned King George IV), its minarets and domes are a remarkable sight. Although the exterior is impressive, the inside is equally fascinating — a blend of Regency, Chinese, and Indian grandeur. In the surrounding landscaped gardens, you can have a picnic on the grass or watch a zebra playing a keyboard, a perfectly normal sight in Brighton.

CultureForget Stonehenge and Head To Salisbury, the Best Medieval City in the UK
Tagged
Culture Insider Guides
What did you think of this story?
Meh
Good
Awesome

The Ultimate Day Trip To Brighton From London