The great beach vacation is as American a summer tradition as baseball games and regrettable decisions with fireworks. Family trips to the shore are the stuff of endless childhood nostalgia, full of taffy and soft serve ice cream, midway rides, and Ferris wheels.

It is for kids anyway. Because kids don’t have to pay for any of that. Moms, dads, and other adults, however, have to plunk down their credit cards for all that seaside serenity. Which, if you’re at all budget conscious, can make your relaxation riddled with anxiety.

No beach vacation is ever free, sure. But in Myrtle Beach, you can do all the stuff you vacation at the seaside for at a fraction of the price. The place they used to call the Dirty Myrtle has cleaned itself up in the past decade but hasn’t jacked up prices to go with its new image, making it the best value beach destination anywhere in America. 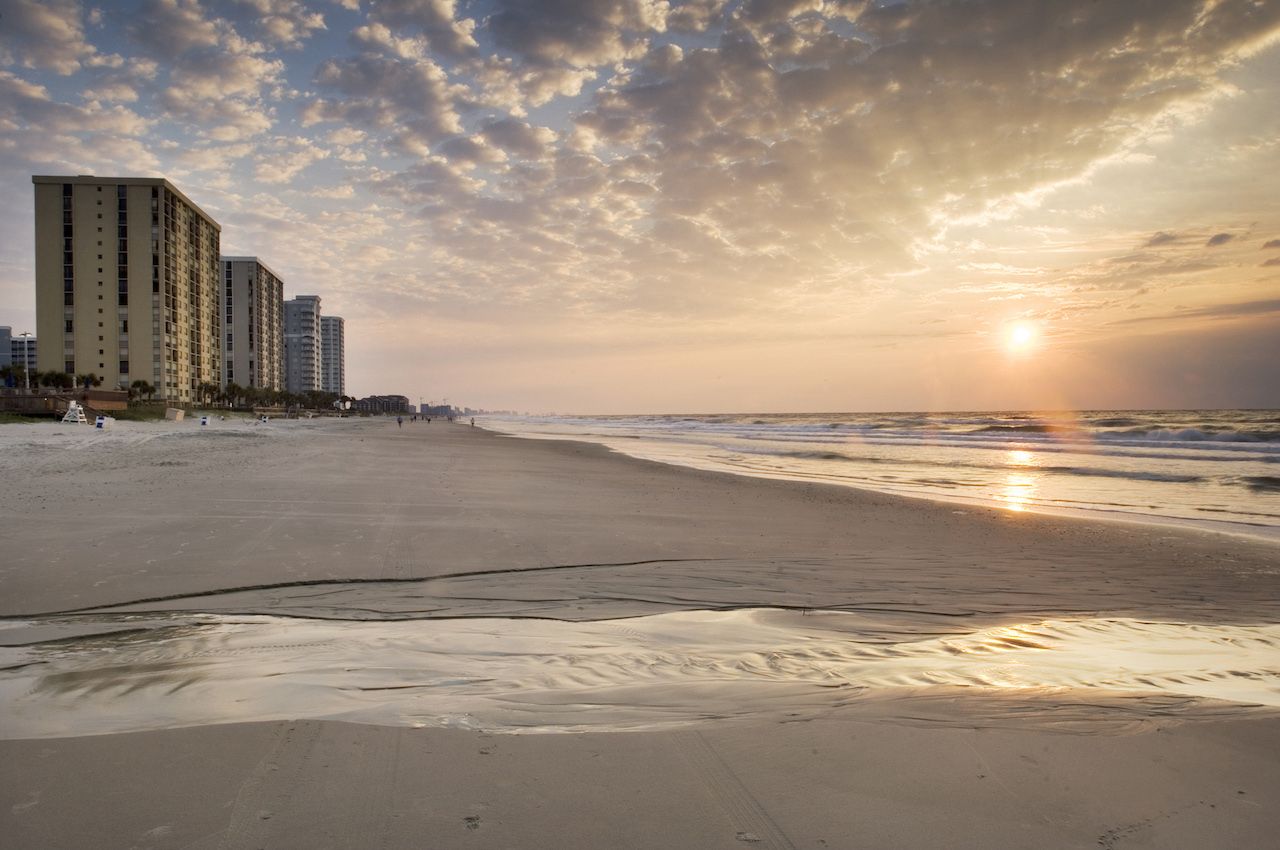 Myrtle Beach, for decades, was synonymous with heavy bikes topped with heavier riders, belching their way along the boardwalk and ruining quiet beach days. To others, it was a spring break destination, complete with teenagers staggering along the sand with even less consideration than they had inhibitions.

At best, it was a giant outdoor mall of mini-golf courses, bad seafood restaurants, and three-for-$10 t-shirt shops.

And to some degree, all of that is still there. The stretch of Highway 17, or Kings Highway, between the airport and North Myrtle Beach is still a parade of beach stores, with a healthy smattering of seafood buffets mixed in. The city still welcomes Bike Week — though that’s been curtailed to twice a year. And Spring Break still brings its share of college students, but you never see videos of bedlam here as you do in, say, South Beach. 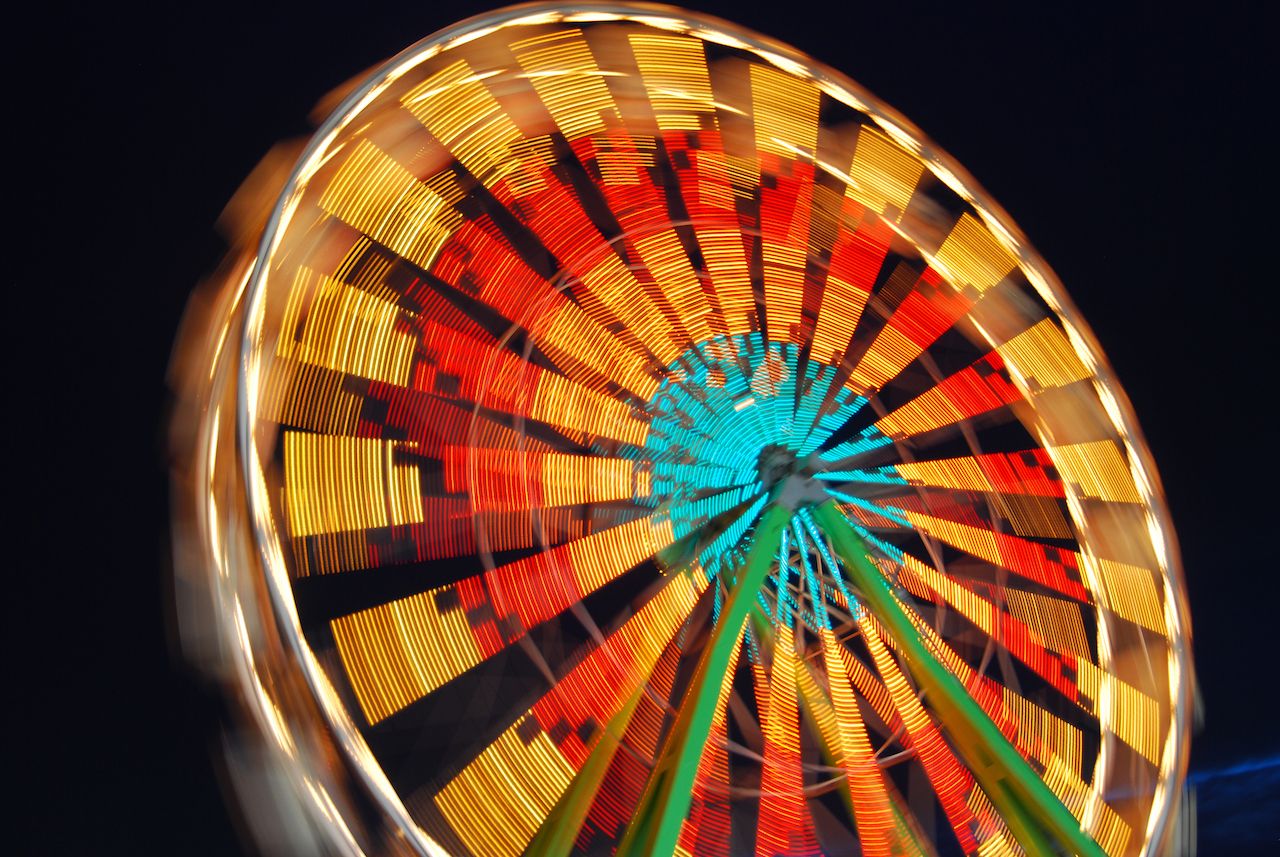 The city added a boardwalk to its downtown and rehabilitated some older buildings, kicking seedier bars out and replacing them with family-friendly attractions like the massive Skywheel. It added a shiny new minor-league baseball stadium where an entire family can spend an evening for under $100. And it added amenities to the 60-miles of beach they call The Grand Strand, minimizing high-rises and leaving plenty of sand for everyone.

Beaches, of course, are free almost everywhere (sup with that, New Jersey?) but staying anywhere near them is generally not. But because Myrtle Beach has so much oceanfront, it also has a lot of oceanfront hotel inventory.

That means you can stay upscale somewhere like the Anderson Ocean Club, where a full modern condo with an ocean view runs about $250 a night during the week. Or you can go budget right on the beach at spots like the Best Western Grand Strand, with rates under $100.

Stepping off the beach, you can enjoy the sunshine from any number of beachfront bars along the boardwalk, where $2 beer specials are the norm, and you can find local craft brews for $4. They’ve got the requisite fruity drinks there too, few of which top $9.

Beautiful southern scenery beyond the beaches 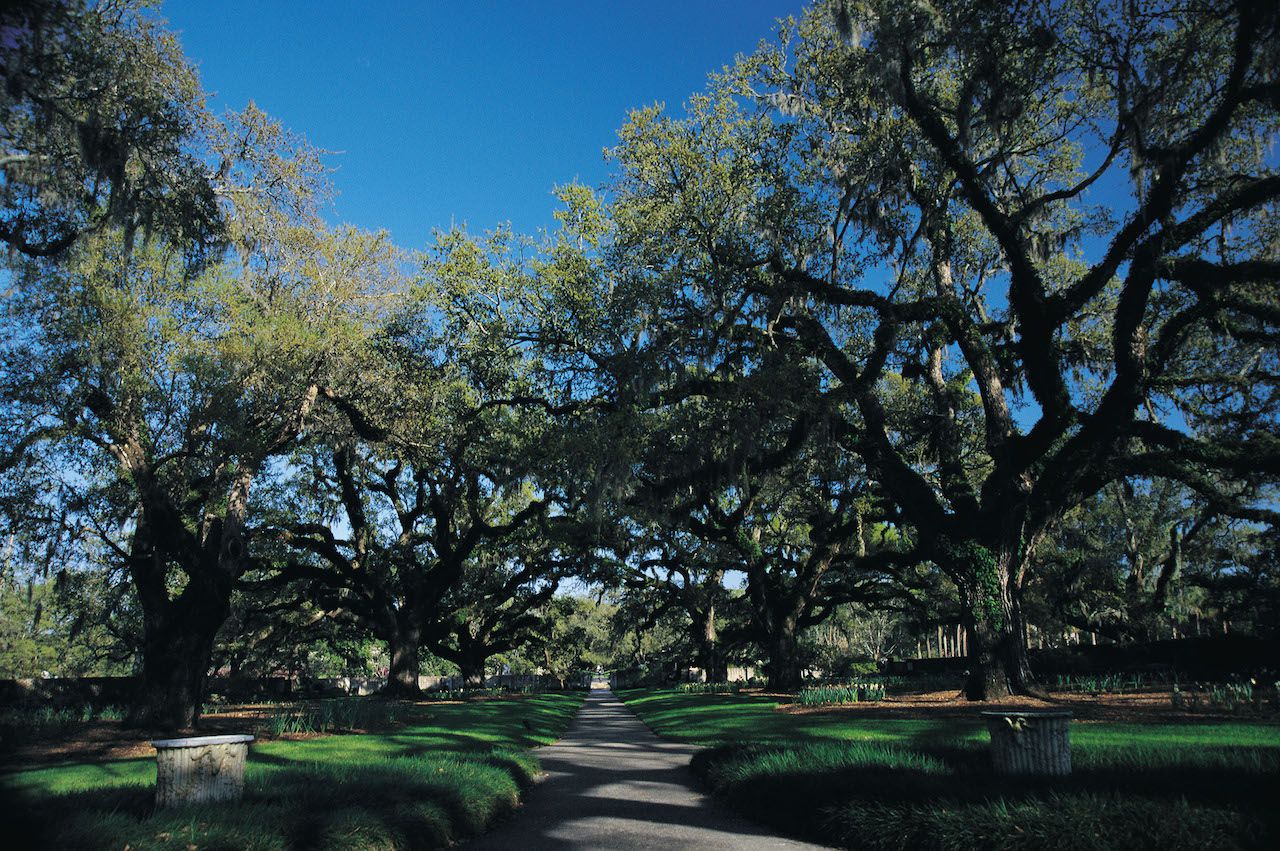 But affordable relaxation isn’t limited to the coastline in Myrtle Beach. About 20 minutes south you’ll find the masterful Brookgreen Gardens, a former rice plantation opened in 1931 by Arthur Huntington and his wife Anna Hyatt Huntington. The 15-square mile park boasts its own zoo, boat rides out to remote parts of the plantation, and a remarkable sculpture garden with over 2000 pieces.

A walk through the grounds here is a perfectly temperate art museum where you’ll stroll by fountains, through a live oak alley, and under a canopy of Spanish moss past bronze statues of Greek gods. A ticket, which runs a reasonable $18 for adults, is good for seven consecutive days, so you can literally come back and see something different every day. 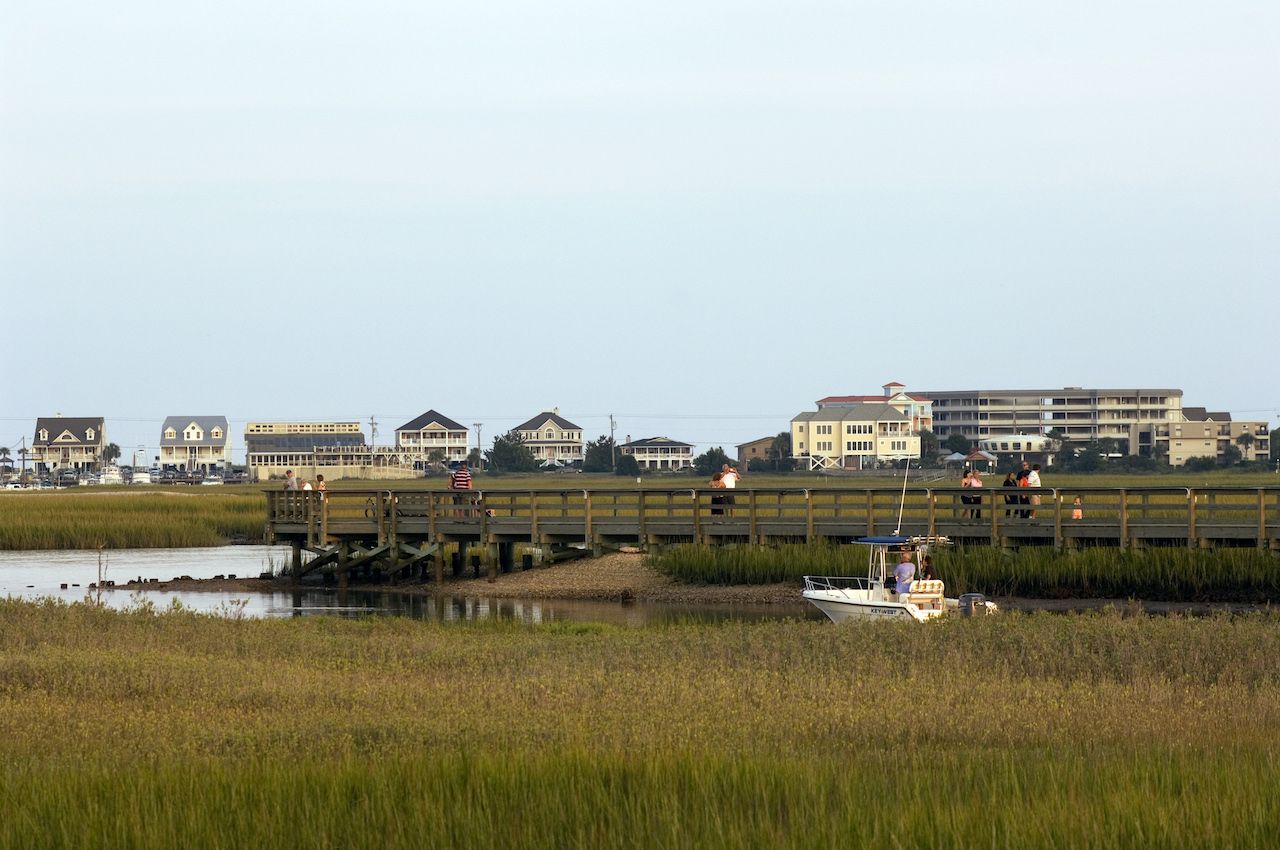 If you’re looking for a more natural experience, you’ll have plenty of places to explore the cypress swamp along the Waccamaw River. Richard Laurent, who owns Black River Outdoors in nearby Conway, runs a particularly relaxing kayak trip where you’ll delve deep into the wilderness while he wrangles brown water snakes from trees.

“I’m going to change the way you look at snakes,” he told me as we paddled along the eerily silent black waters on a perfect Tuesday morning. He explained that few, if any, are even remotely dangerous, and most of them just want to be left alone in the water.

After half a day listening to him explain the wildlife against the blue sky and green cypress trees, I found it hard to imagine Myrtle Beach as anything other than idyllic.

Not far from Brookgreen Gardens you’ll find Murrells Inlet, most famous as the home of Suck, Bang, Blow, the state’s baddest biker bar. But in the lull between Easter and Bike Week, that bar just seemed another outdoor space to enjoy the marshland. After a drink there I headed to relish in a sun-soaked lunch at Wicked Tuna, a marshside seafood restaurant that hauls fresh fish on its boats each morning to serve at lunch and dinner.

On a hot afternoon, I enjoyed a tuna poke bowl with avocado. The fish tasted still cold from the Atlantic, and washing it down with a cold local beer seemed the epitome of vacation meal. 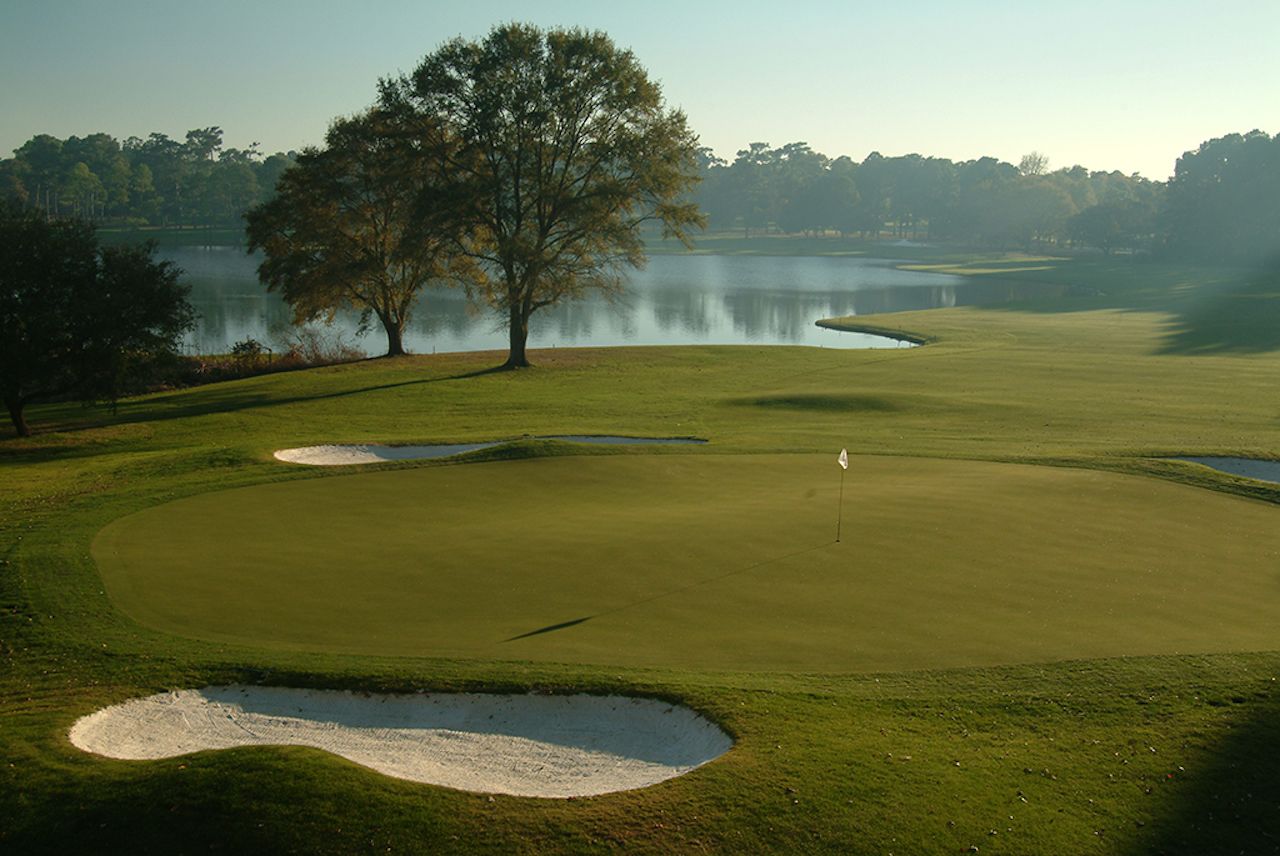 Myrtle Beach has about 90 golf courses — fewer than it used to — but has become a golf vacation destination on par with Hilton Head or Ponte Vedra.

“What’s impressive about Myrtle Beach is we haven’t grown because of pro golf,” Steve Mays tells me as we lounge in the old southern clubhouse at Pine Lakes Country Club. Mays is President of Founders Group, who owns many of the big-name courses around the region. “It’s been an amateur’s paradise, people came and golfed here and keep coming back.”

The city hosts no PGA Tour events, but it still welcomes nearly a million golfers annually. They play courses like the Jack Nicklaus-designed Pawleys Plantation and Pine Lakes with its stately, exquisitely designed clubhouse for less than $100 a round many days.

The other golf Myrtle Beach is known for is of the miniature variety. And you’ll find no shortage of those courses either as mini-golf spots with themes ranging from Mayan ruins to outer space dot the main drag. I played a round at Jurassic Golf near the airport, where my second shot on hole 14 was interrupted by a giant animatronic T-rex popping up from behind a mangled concrete wall. Fifteen dollars lets you play here until that doesn’t surprise you anymore. 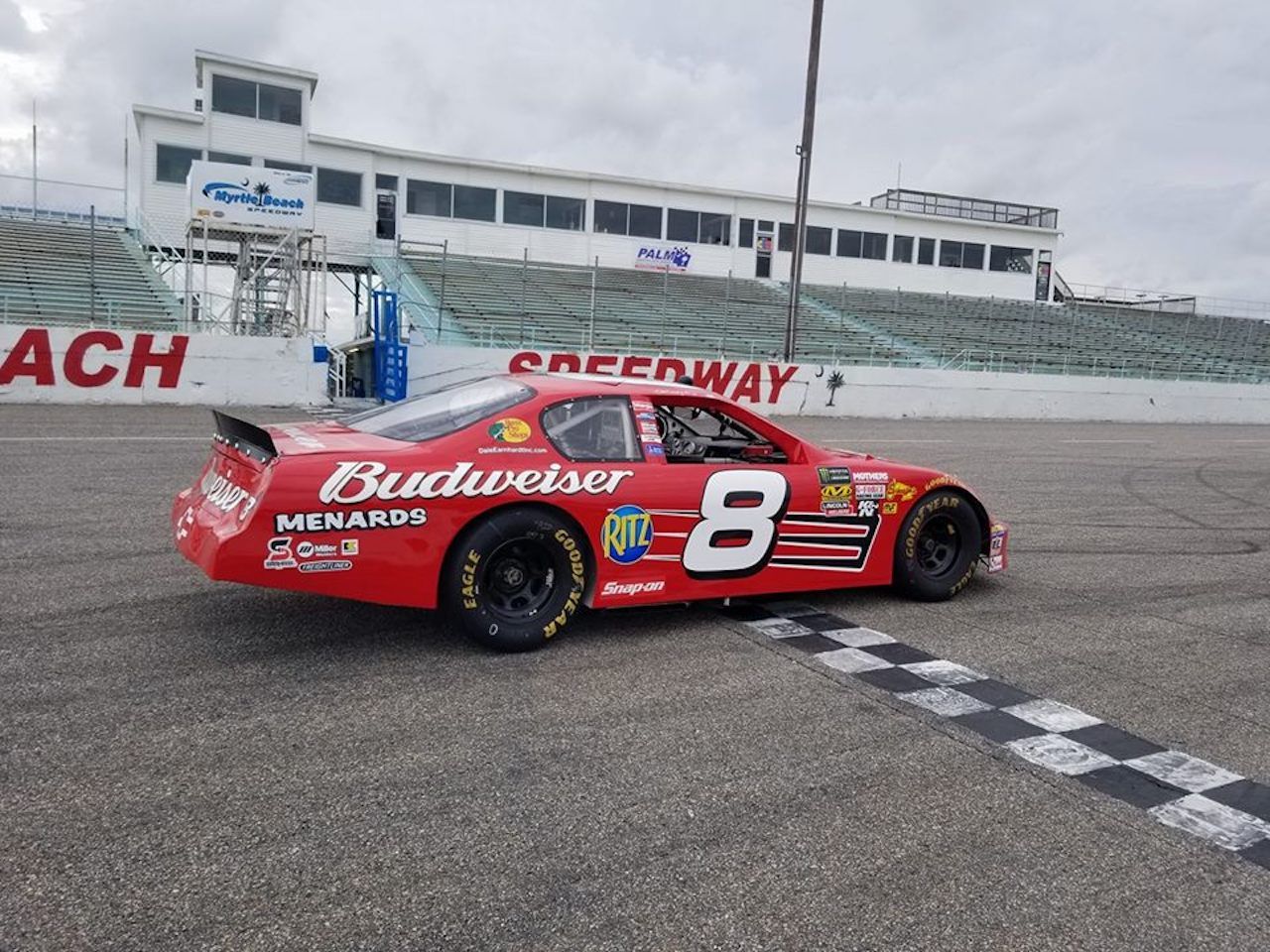 If golf’s not thrilling enough and you need some adrenaline to offset all that relaxation, try driving a decommissioned NASCAR stock car around a race track. The NASCAR Racing Experience — which typically follows the big races to places like Las Vegas and Charlotte — has its only permanent attraction in Myrtle Beach. After a quick lesson, you can throw on a fire-retardant suit, strap into a car Dale Jr. once drove, and take left turns for three laps. At $199, it’s not cheap. Compared to upwards of $500 to do the same thing at an F1 track in Europe, though, it’s a bargain.

Eating well here won’t kill your budget, either. Probably the city’s top restaurant is Hook and Barrel, about 10 minutes north of the main drag on Kings Highway. The large farm-to-table bistro was running a 20-minute wait on the Tuesday night I stopped in, where a deft bartender managed a bar two-deep with people eating at every seat. I enjoyed a pesto chicken flatbread, a filet mignon, and a bottle of rare Uruguayan Tannat. My bill, with tip, wasn’t $100. 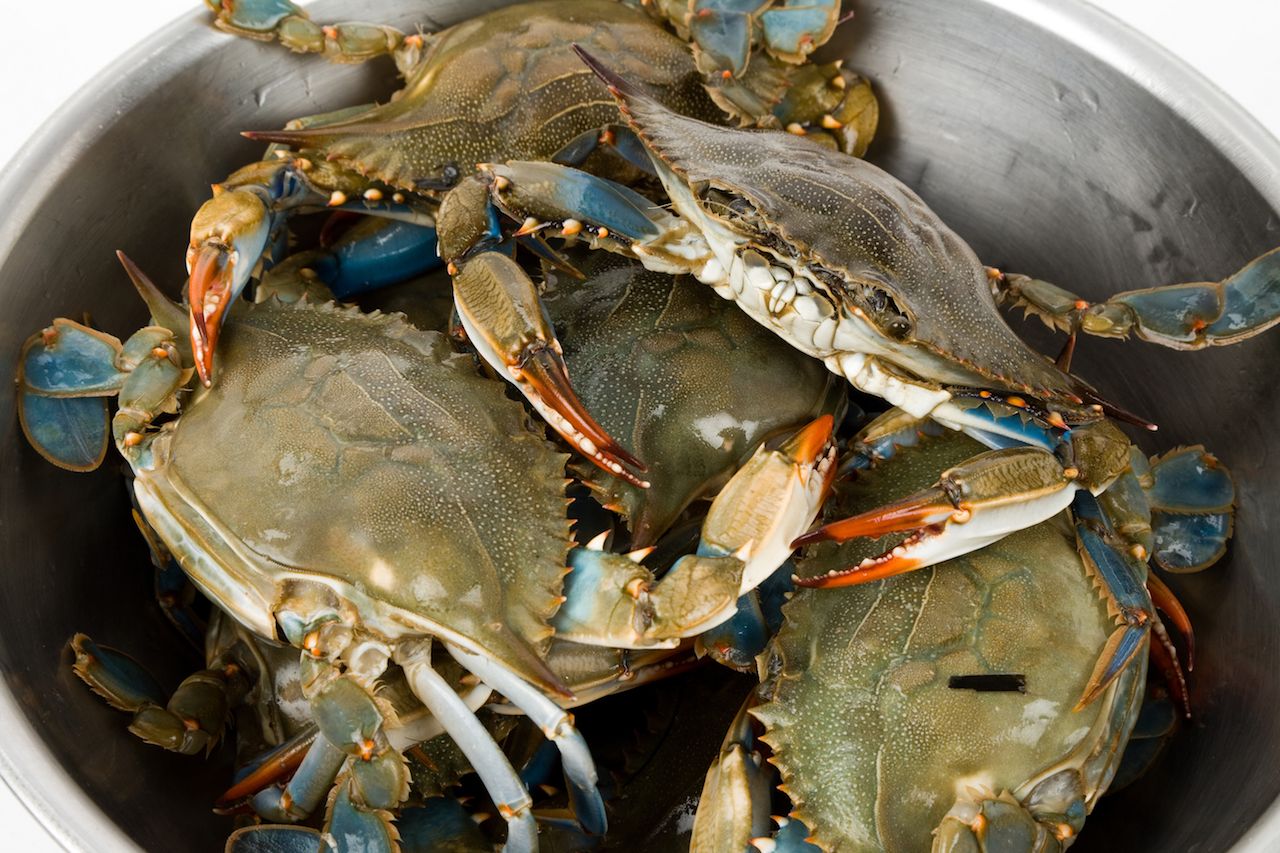 Closer to the action you’ll find Strong Waters Craft Cocktails and Kitchen. The menu is big on stuff like braised short rib and gourmet chicken and dumplings, the kind of high-end Southern comfort food that restaurants attempt to duplicate up north. The cocktails here are easily the best in the city and run about $10 each. 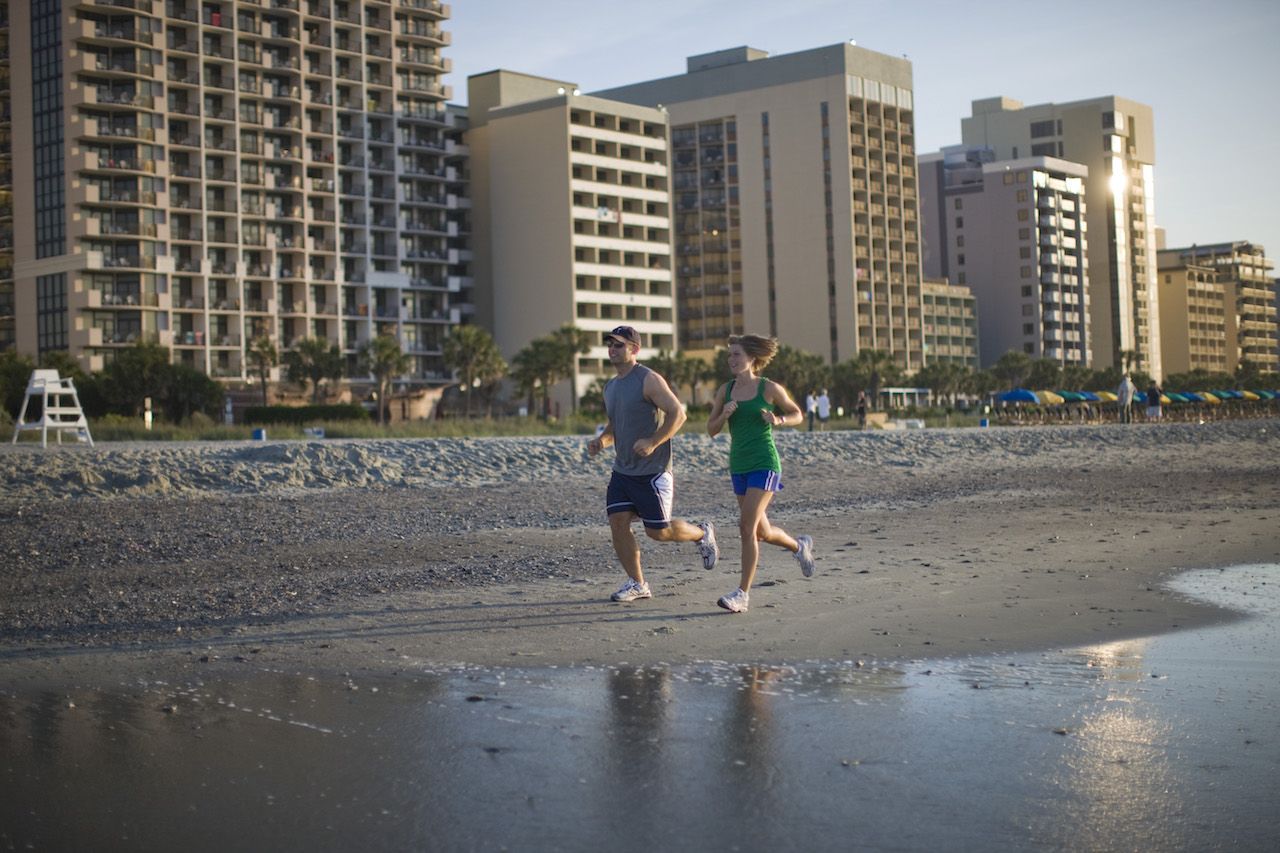 Everything about Myrtle Beach gives visitors a sort of reverse sticker shock: You think everything will cost about 30 percent more than it does, and you’re always pleasantly surprised at how good it is. Call it the anti-tourist trap. The antithesis of Disney. Families would be hard-pressed to find a better all-around value when looking for somewhere by the sea to spend their summer vacation. Just plan ahead and make sure you’re not there for Bike Week.