Where North Carolina once straddled the deep South and the mid-Atlantic has deftly taken its combination of mild weather, serene beaches, and adventure-filled mountains and turned itself into the California of the East. Luring young families, snowbirds, college students, and retirees to its lush pine forests and soft rolling hills.

That population has turned places like Raleigh, Asheville, Wilmington, and Durham into legitimate weekend destinations. Cities with character, history, and rich southern food that make for a relaxing getaway most times of year. But in the middle of North Carolina, long-overlooked Greensboro is quietly turning itself into North Carolina’s next great destination — taking its own nature, fascinating history, and creative culture to make a city worth visiting for a lot more than the ACC tournament. Here are seven reasons Greensboro needs to be on your radar.

1. Downtown does it right. 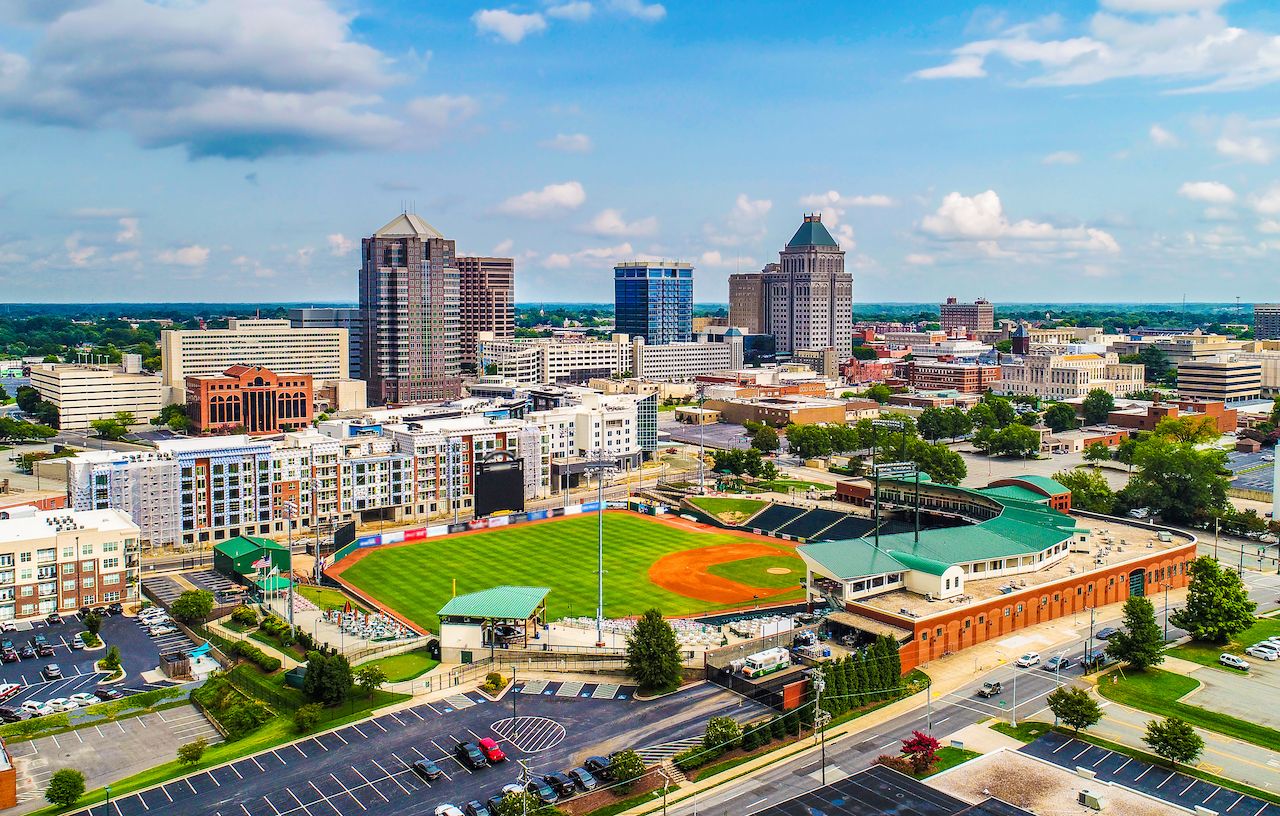 Greensboro has done a masterful job with its main drag, which next year will be anchored by a new performing arts center on one end and a funky neighborhood full of breweries and thrift shops on the other. Elm Street is full of the kind of old brick facades you see in nostalgic black-and-white photos, the buildings now occupied by craft taco shops, a regional theater company, wine bars, and modern southern restaurants. 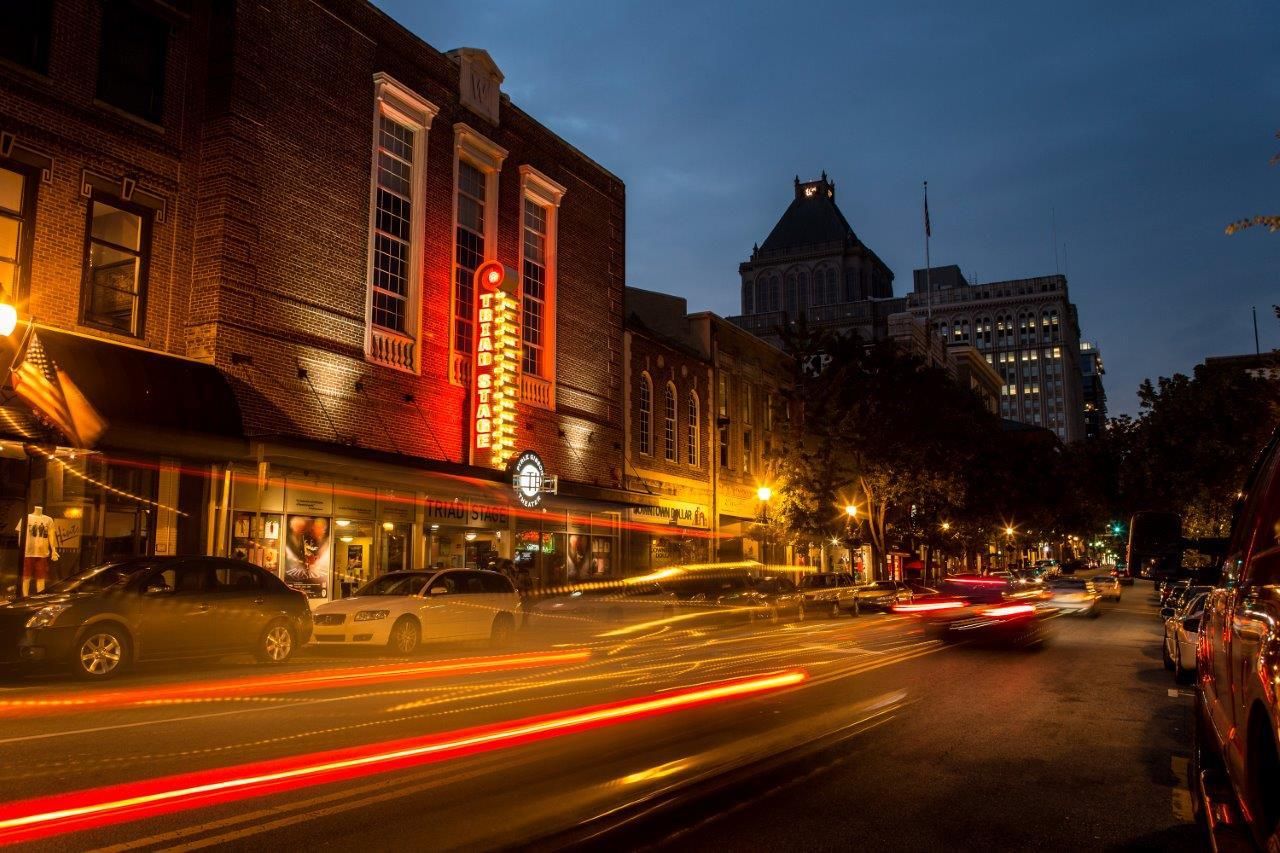 On a sunny Saturday I spent the better part of an afternoon participating in Downtown’s annual Sip n’ Stroll event, a sort of bar and restaurant crawl through downtown. I began in City Center Park, a model of public green space where the Korean Festival had taken over the bandshell. There I had a glass of wine at Café Europa in the adjacent LeBauer Park while kids cooled off in a splash pad nearby. We walked from there down Elm, stopping at 1618, a bistro-wine bar, and Stumble Stilskins, a Boston-style Irish dive. The journey ended at a pair of breweries near the railroad tracks — Little Brother and Natty Greene’s.

Surrounding Downtown is the Greenway, a four-mile loop of biking and hiking trails that’s the perfect way to get the lay of the land. It’s ideal for a morning run to get a sense of all you’ll want to see later.

2. The history is fascinating. 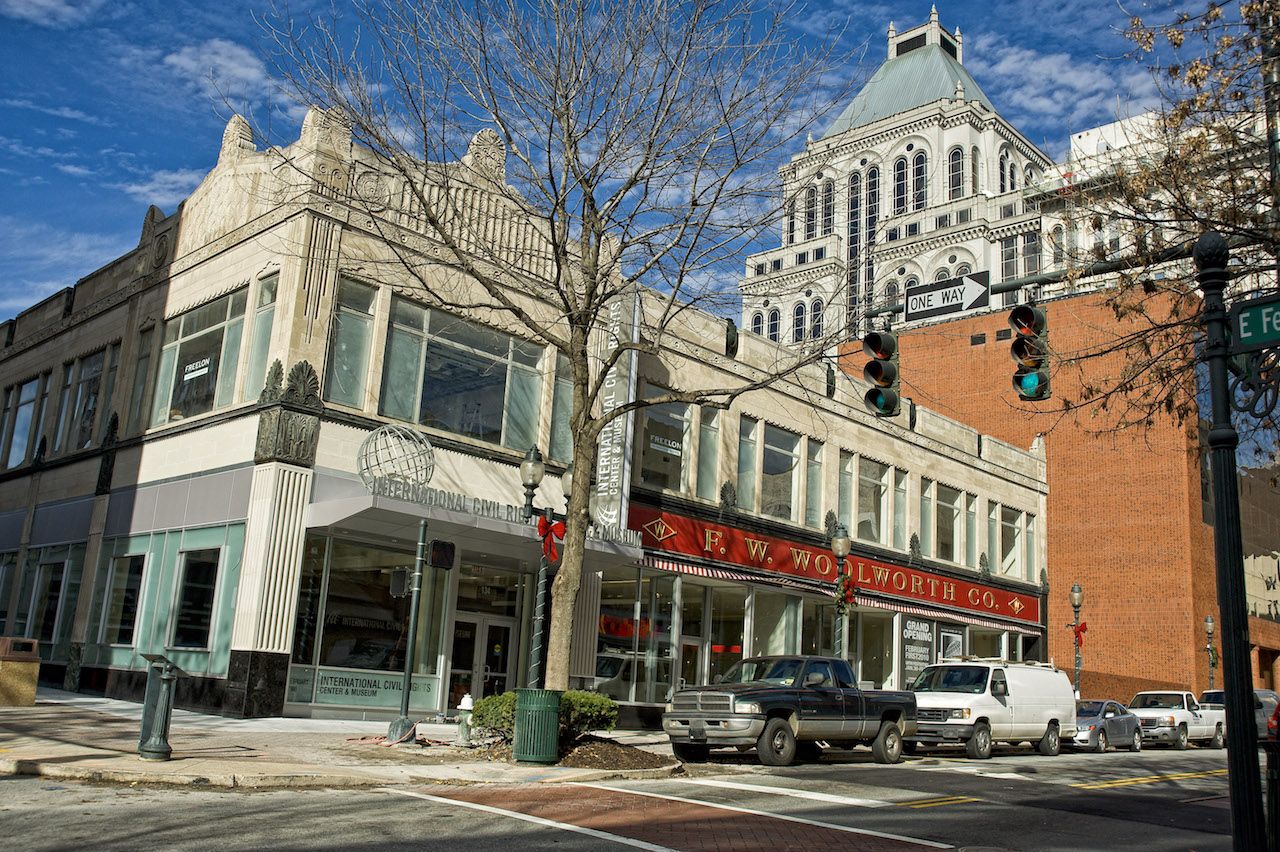 Greensboro is the birthplace of Vicks Vap-o rub, a fun fact you’ll learn on one of the many historic plaques running through downtown. But the history here runs much deeper than medicinal pastes. Greensboro is also the home of the Woolworth’s Lunch Counter, where four black students began the lunch counter sit-in movement in 1960. The counter is still there, but the Woolworth’s that housed it is now the International Civil Rights Museum, one of the most unique exhibits on the American black experience.

The museum is not a simple collection of artifacts but an uncomfortably designed space where you’re guided by a poet or other artist who explains — in powerful language — how the United States has treated people of color. Through graphic photos of lynchings, purposefully cramped spaces made to simulate “colored only” areas of the Jim Crow era, and numerous short films, the museum is as much a message as it is an education.

Its centerpiece is the old lunch counter, which stands just as it did in 1960, minus a few stools that have been shipped off to the Smithsonian. The museum also doesn’t allow photos, as it’s meant for quiet reflection, not Instagramming.

3. Outdoor recreation is accessible to all. 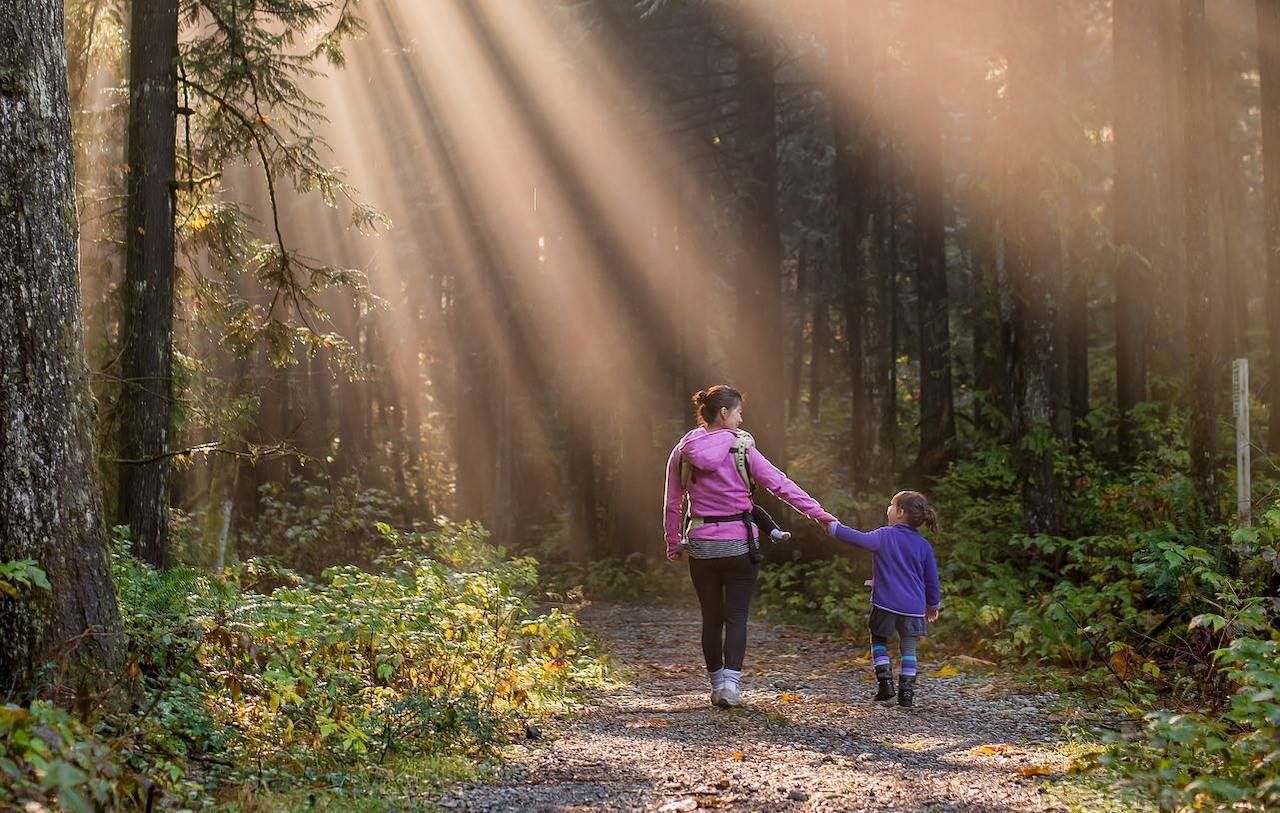 Though the mountains near Asheville and the beaches on the coast get much of the Carolina outdoor hype, sparsely populated Greensboro has a magnificent system of hiking and biking trails that make it an outdoor destination anyone can enjoy. That’s because the trails are, for the most part, easy. So even if you’re not usually an active vacationer, you can get lost (figuratively) among towering Magnolia and pine trees, with nothing but the sounds of birds and the lapping of water accompanying your morning stroll.

The bulk of the trails are based around a watershed maybe 15 minutes from downtown. Trails surround the lake where you’ll find water peeking out from behind the trees as you meander its soft elevation gains. The city of only about 300,000 doesn’t jam the trails either, as on a seven-mile hike through the Nat Greene trail one Saturday I encountered maybe a dozen other people. 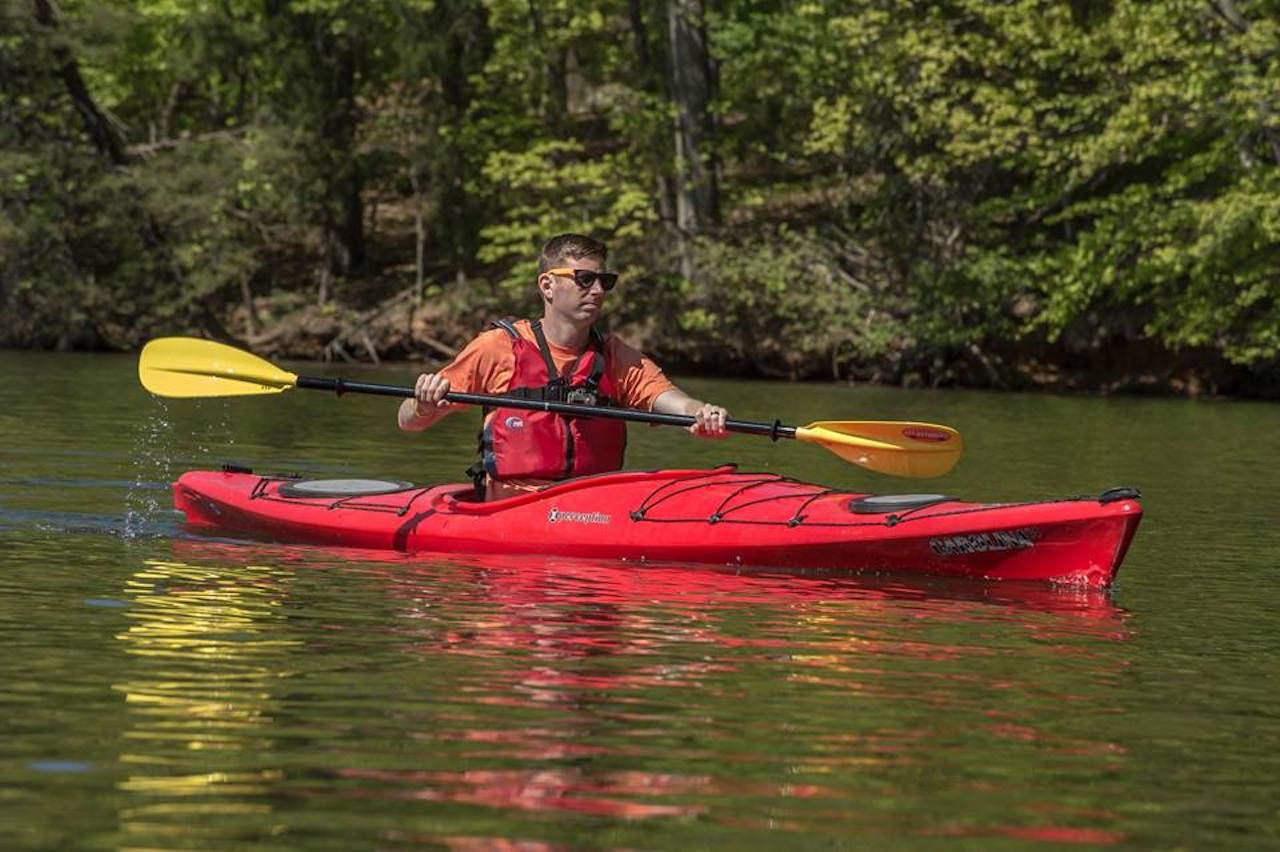 Again, the hiking here is easy, so it’s not a destination for the hard-core outdoors folks. But the flat, peaceful trails create an environment ideal for even those who don’t exercise much. In addition to the trails, the watershed area has numerous boat, kayak, and stand-up paddleboard rentals if you’d rather enjoy the Carolina sun from the lake.

4. Greensboro has seasons, but it’s never too cold. 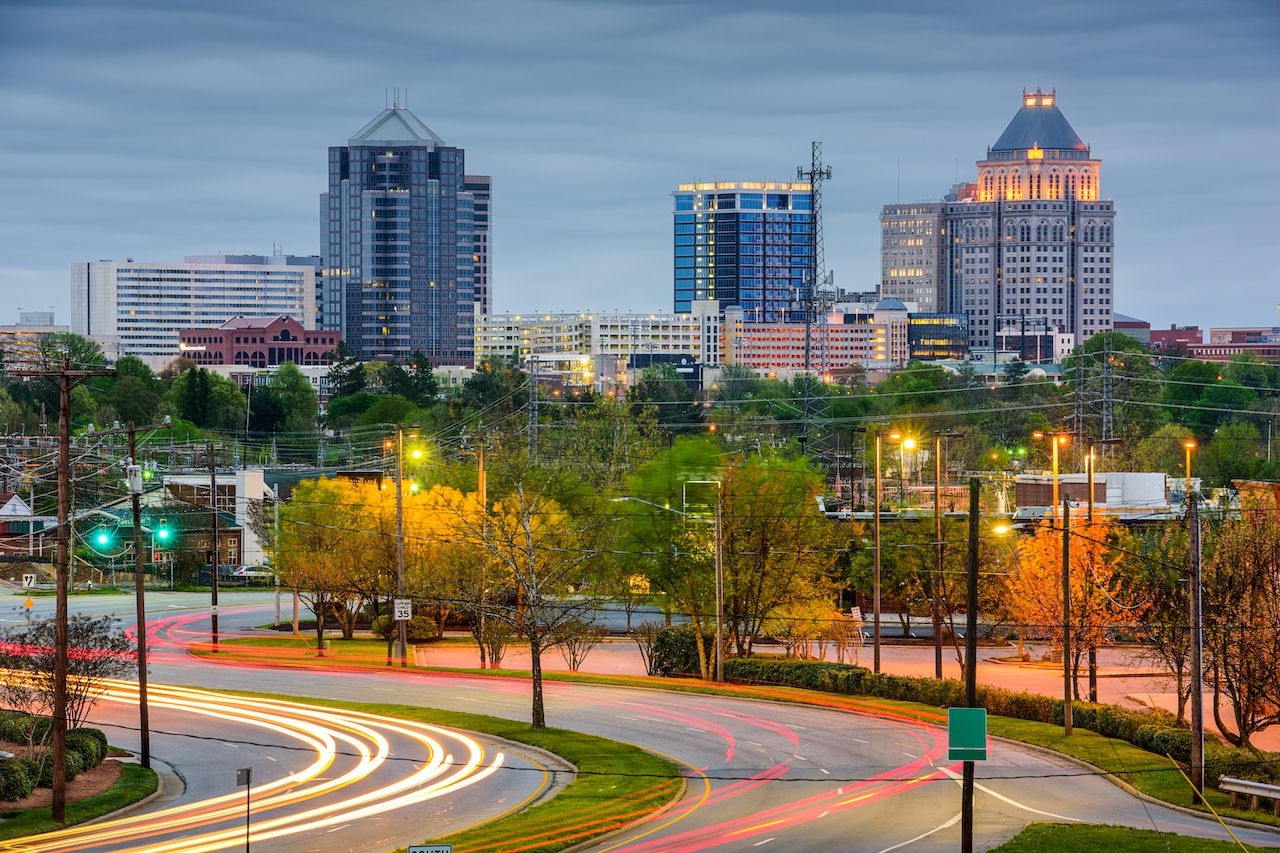 The great outdoors isn’t seasonal either. While I was fortunate enough to visit in mid-April, with cool mornings, sunny afternoons, and pleasant, chilly evenings, Greensboro rarely gets too cold or too hot. December and January bottom out with highs in the low 50s. Not exactly tanning weather but cool enough to let you know summer is gone.

Summer can get a little humid, like most of the South, but under the shade of the thick trees or out on the water you barely notice temps in the upper 80s. It’s the kind of mild climate that draws throngs of people from the Northeast tired of the cold and Floridians sick of brutal summers and hurricanes. It also means you can plan a trip here and never worry about getting rained out. 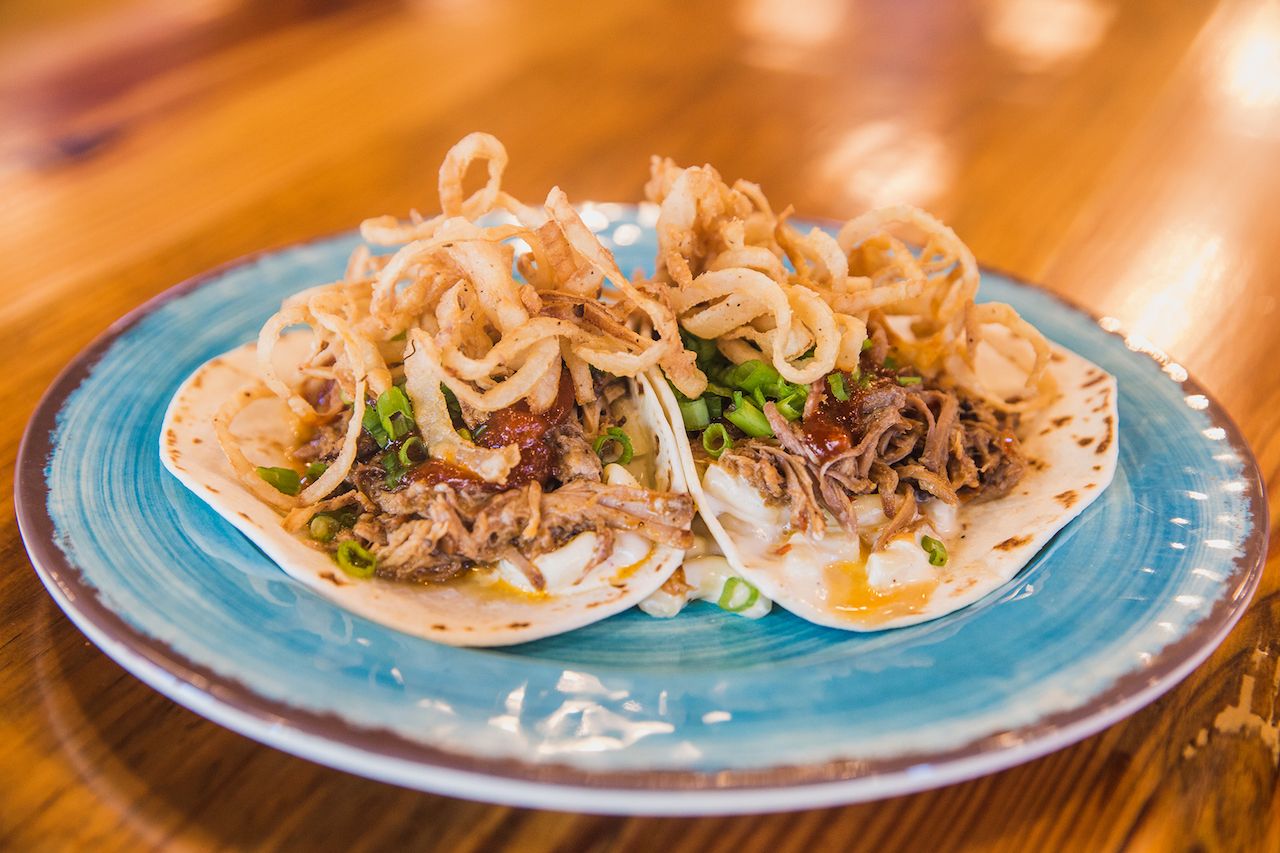 Every, and I do mean every, small-to-midsize city in America seems to tout its up-and-coming food scene. Greensboro is no exception, and like many cities its size, you’ll find enough first-class restaurants to fill a long weekend.

Chef Kris Fuller, who with her short hair, tattoos, and gauges in her ears looks like she just stepped off the set of Chopped, has food worthy of the show too. Her series of Crafted restaurants are the approachable best bet for trying something different in Greensboro. Hit the downtown Art of the Taco for southern-inspired tacos filled with stuff like pulled pork and mac and cheese.

Blue Denim — so named after Greensboro’s history as the home of Lee and Wrangler Jeans — is probably the culinary star of the city, offering Cajun specialties like crawfish beignets and shrimp and oyster po’ boys.

On Elm Street I had the best falafel I’ve tasted outside Israel at Jerusalem Market, a family-run fast-casual spot with a sunny back patio.

Venture into the Lindley Park neighborhood and get possibly the best pizza in the state at Sticks and Stones. The brick-oven pizzeria serves cold local beers on an outdoor patio. Slinging pies topped with local ingredients like the Sweet Carolina with Cane Creek farm sausage, wood-roasted chiles, and local spinach. 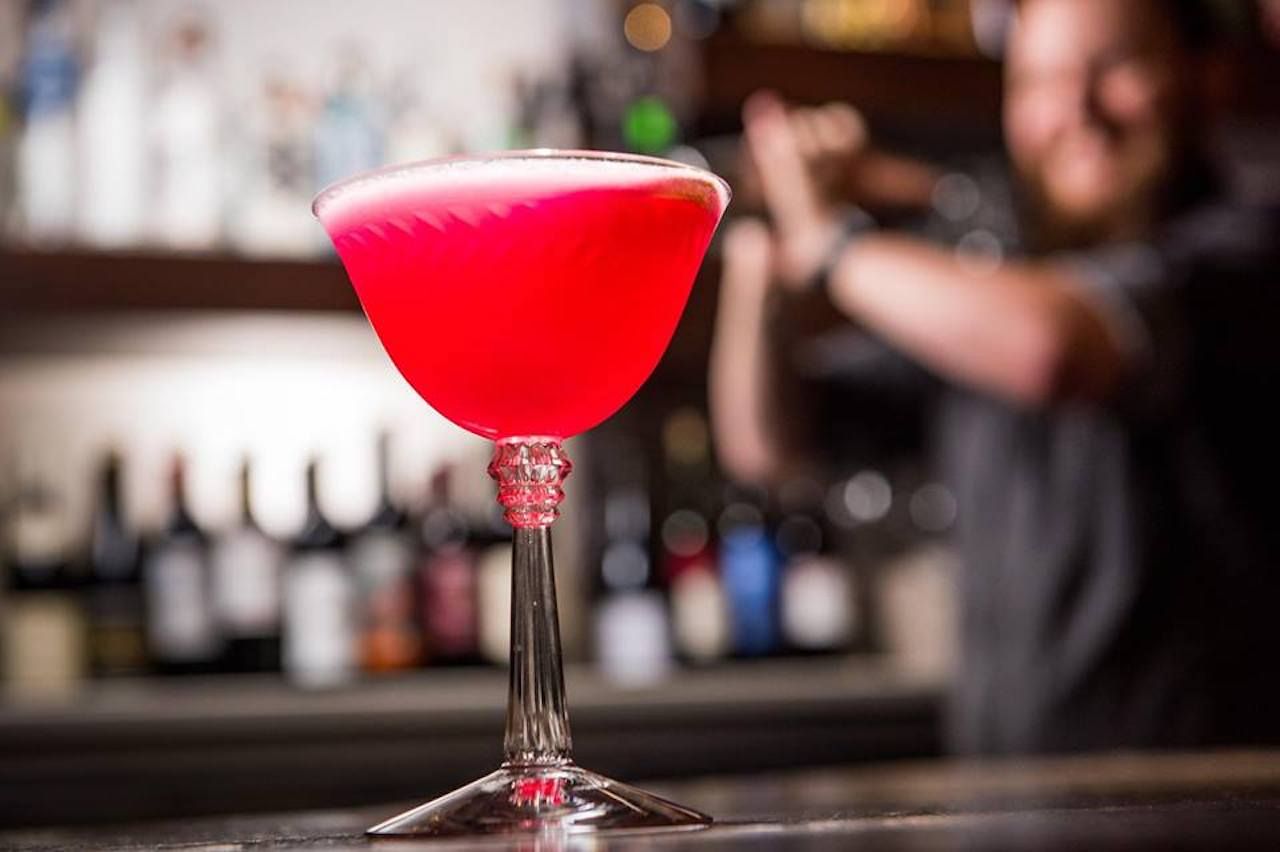 Greensboro has a lovely historic downtown, but unlike a lot of newer cities, it also hides a lot of its gems in strip malls and nondescript office parks. I realized this when looking for late-night dining (one area where Greensboro still lacks) and happening upon 1618 Midtown, tucked into a nondescript shopping strip near a Walgreens. I sat at the bar and began chatting with the bearded bartender while waiting for a chorizo rice bowl and truffle fries. His name was Max Barwick, and he was the sort of bartender who sees you looking at a menu, asks what you like, then makes something completely off the menu.

“That guy won a huge international competition in New Orleans,” a slightly tipsy regular at the bar next to me said. “He’s a big deal.”

Barwick returned with a mezcal-jalapeño-lime concoction that tasted like he’d read my mind. I asked him about the award and he humbly told me he’d won the Cocktail Classique in New Orleans in 2018 with a drink called Bitter, Party of One.

“Everyone else there was from Brooklyn,” he said. 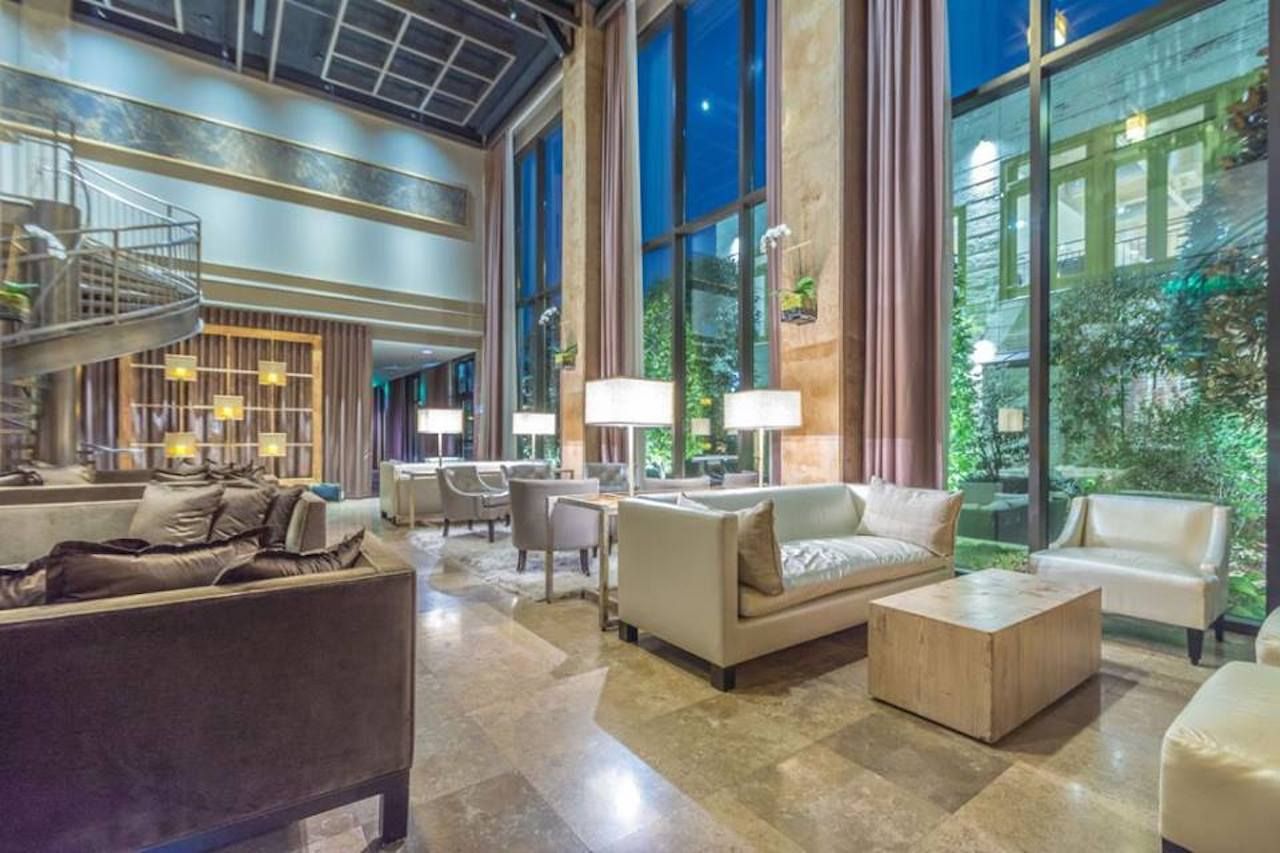 Not far away I found myself wandering through an office park and finding a towering, modern-gothic building standing up through the night fog. It was the Proximity Hotel, a boutique property that looks like an old converted bank, set among the kind of places banks now call home. It is far-and-away the most unique modern hotel in the city, with all the boutique staples like subway tiles in the bathroom, luxury bath products, vintage furniture, and high-tech gym equipment.

It’s also home to Print Works Bistro. It felt like more of a destination restaurant than a spot stuck in a suburban hotel, with gourmet flatbreads and tuna tartare leading into a menu full of stuff like lemon garlic shrimp risotto and bacon-wrapped meatloaf. It’s an example of how Greensboro has put emphasis on areas many cities neglect.

7. People haven’t discovered it… yet. 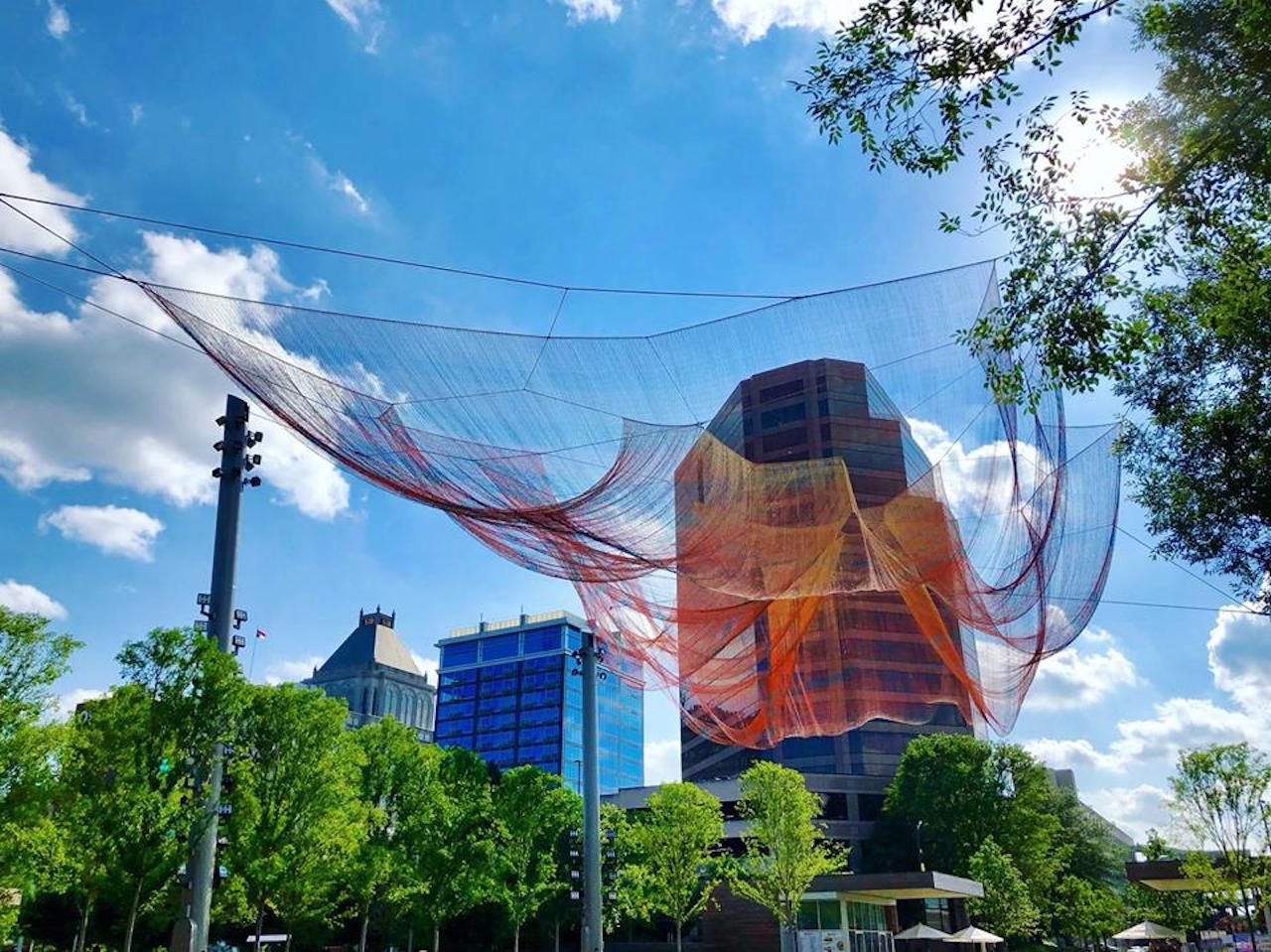 Greensboro isn’t the first midsized southern city to offer this sort of amenity-filled escape to a smaller place. Asheville, Chattanooga, and Greenville, SC, come to mind for beer or adventure or world-class food. And not that any of those places have become overrun with tourists, per se. But you won’t be avoiding crowds in any of them either. Greensboro offers many of the same things those great destinations do, with nary another visitor clogging up your bike trails. And as the city continues to learn from others’ mistakes and offer more for visitors every year, it likely won’t stay that way for long.

Restaurants + BarsHow To Eat Like a Chef in Asheville
Tagged
Travel
What did you think of this story?
Meh
Good
Awesome