It’s not every day you get to hold a million-dollar guitar. Much less play one.

Of course, I don’t actually play guitar, so the experience was a little wasted. But standing in a back vault at Chattanooga’s Songbirds Guitars museum, holding a piece of Rock and Roll history, I was really wishing I did.

“That’s the third electric guitar Gibson ever made,” Johnny Smith, the executive director of the most impressive guitar museum ever created tells me. “Go ahead, you want a picture?”

Usually in a museum, touching the exhibits gets you thrown out, banned for life, and possibly arrested. At Songbirds, if you see a Stratocaster Buddy Holly once used and think you could do better, you’re welcome to get it off the shelf and try. 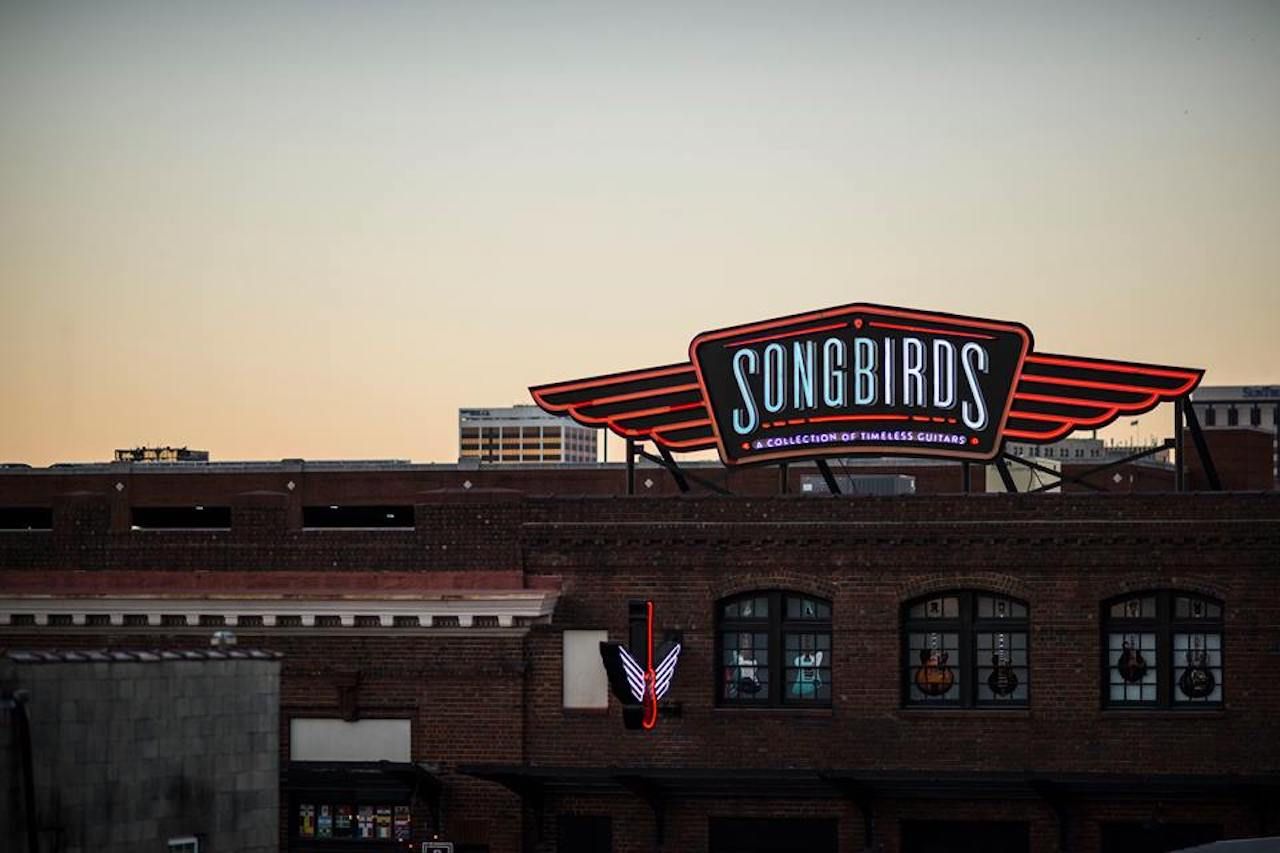 The museum has been open since last year on the second floor of the Chattanooga Choo Choo. The Choo Choo — named after the famous Glenn Miller song — is the city’s historic train station, which reopened last year as an entertainment venue. Songbirds is its anchor, but it also has a live-music venue, a comedy club, a beer bar in an old rail car at American Draft, and a modern restaurant at STIR. It’s the sort of diversity of dining, drinking, and entertainment developers in large cities strive to emulate, and it’s symbolic of what a first-class destination Chattanooga has become. 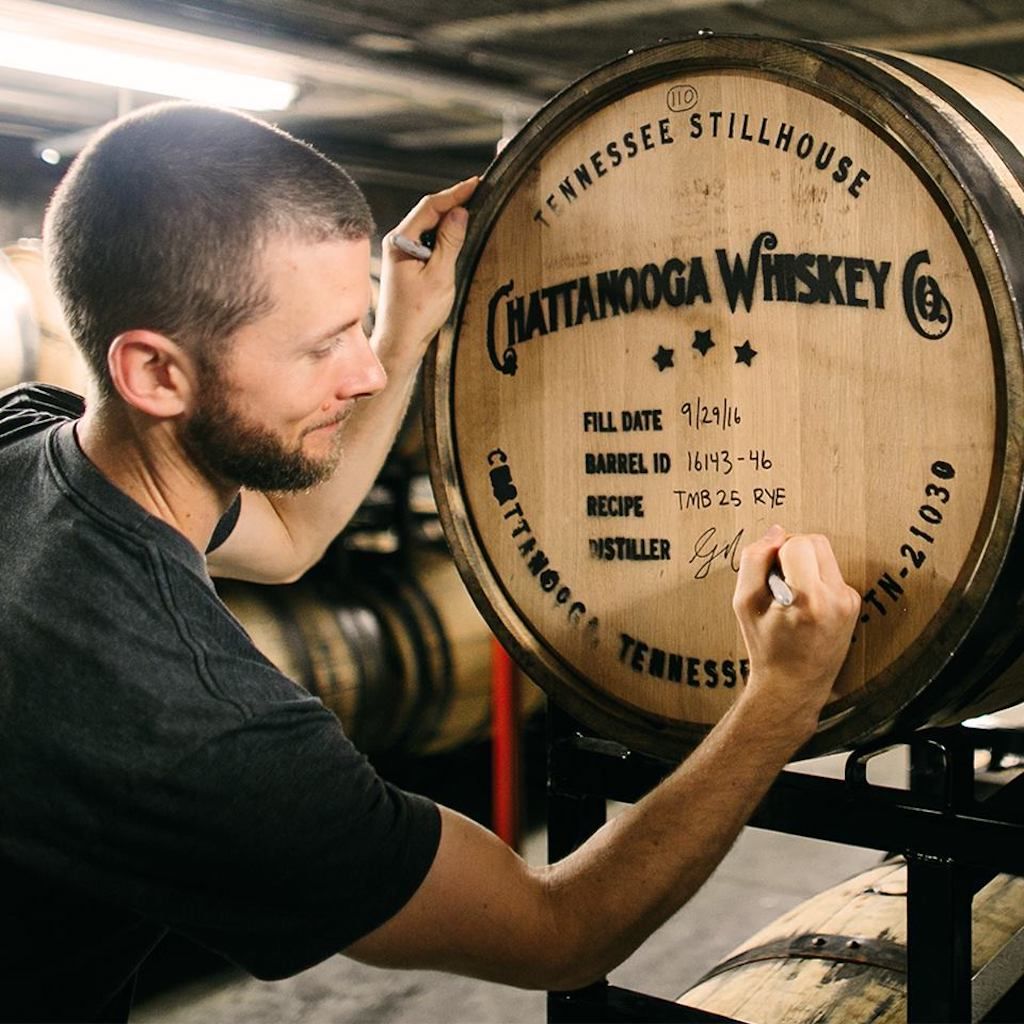 The craft booze scene is taking off.

Though it’s always been a popular place for nature lovers, Chattanooga has complemented its natural beauty with great food, fun bars, and fascinating museums to round out a weekend. For a city of under 200,000, it feels bigger, boasting everything you’d find in more populous locales at a fraction the price and with smaller crowds.

The Choo Choo is a good spot to begin exploring the new Chattanooga, continuing across the street at the city’s first legal distillery to open in over 100 years. Chattanooga Whiskey’s experimental distillery has taken liberties with traditional Tennessee whiskey to create small batch bottlings, from high-rye bourbons to wheated American whiskeys — with plenty of new blends on the way.

Chattanooga isn’t content to rest on its whiskey-soaked laurels, either. It’s also home to a surprisingly large number of breweries, many concentrated in the MLK neighborhood near downtown. The breweries have anchored the rehabilitation of this once dilapidated area, where cocktail bars and nightclubs dot the streets that used to be off-limits after dark. 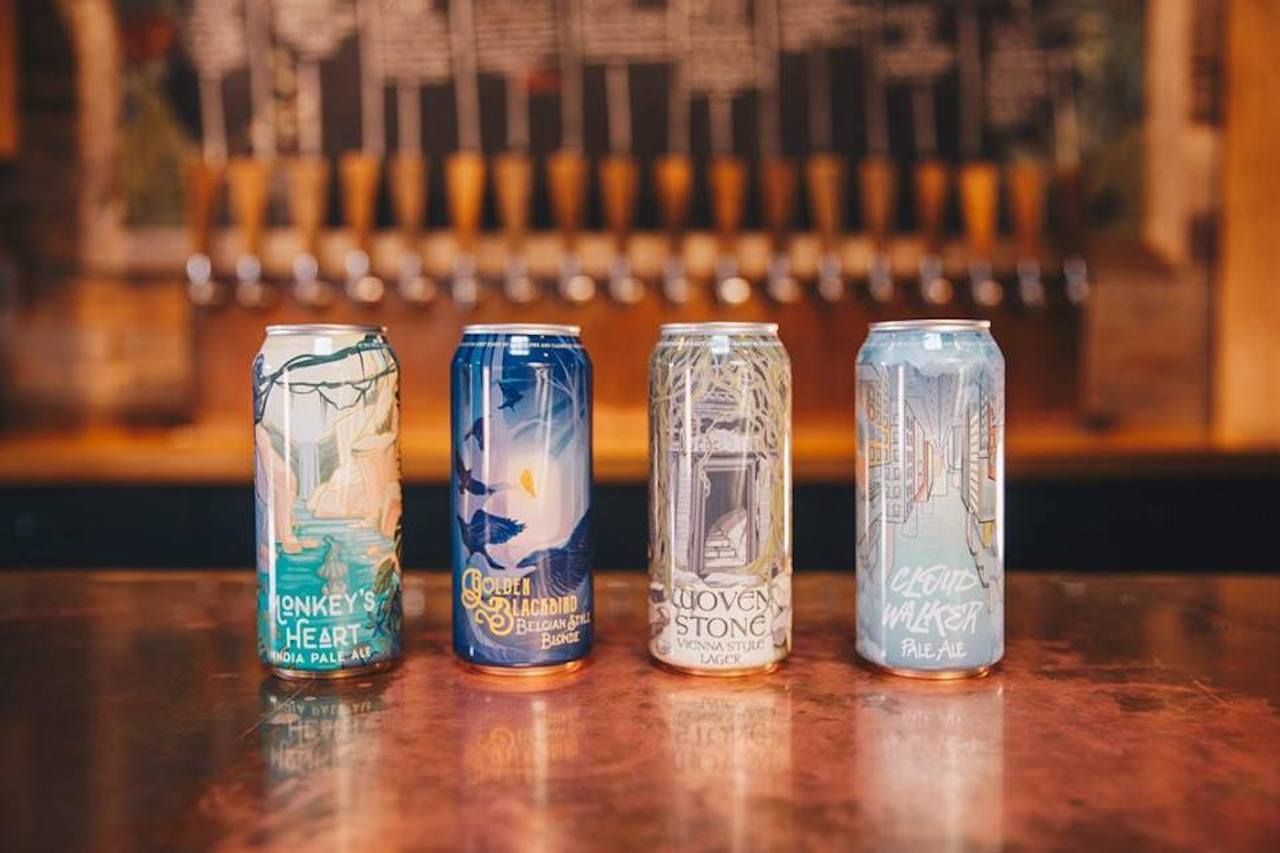 On a Friday night, the indoor beer garden at ODDstory Brewing is packed, where 16 taps pour beers while kids play on the furniture. Pretzels and flatbreads made with the beer’s spent grain pass by, leaving the aroma of the brewery’s signature Belgian Blonde lingering in both my nose and mouth.

After a couple of beers here, it’s a short walk down to Hutton and Smith Brewing, a local hole-in-the-wall bar with a couple of fermenting tanks crammed against a side wall. Inside, service industry types who all seem to know each other knock back the geology-themed brewery’s Tectonic Session IPA and Vadose Zone Vanilla Stout in between cigarette breaks. The local feel makes one realize that while this city has boomed with tourists in the past few years, it’s still the locals that keep creative places like this alive. 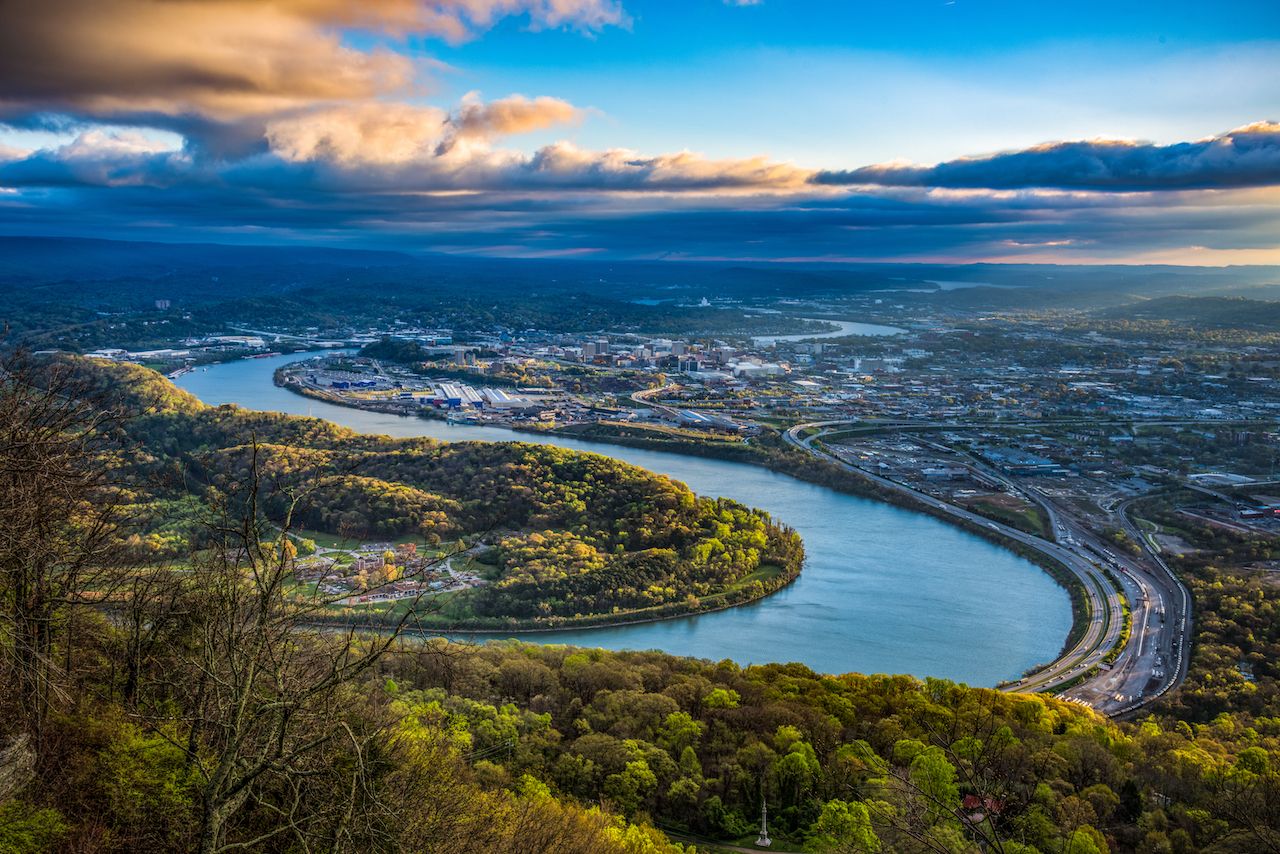 It’s still one of the best outdoor adventure cities in America.

Of course, it’s not all eating, drinking, and choo choos in Chattanooga. What brought visitors here long before craft beer and vintage guitars were the spectacular outdoor adventures.

Even for novices, rafting on the Ocoee River is a must. The site of the whitewater slalom races during the 1996 Olympics, the Ocoee is a dam-controlled stretch of whitewater running through a towering gorge in the Cherokee National Forest. It’s simple enough that a whitewater rookie can get through a guided raft trip without much trouble but offers the drops, holes, and hydraulics that can make it thrilling even for those who’ve rafted extensively. 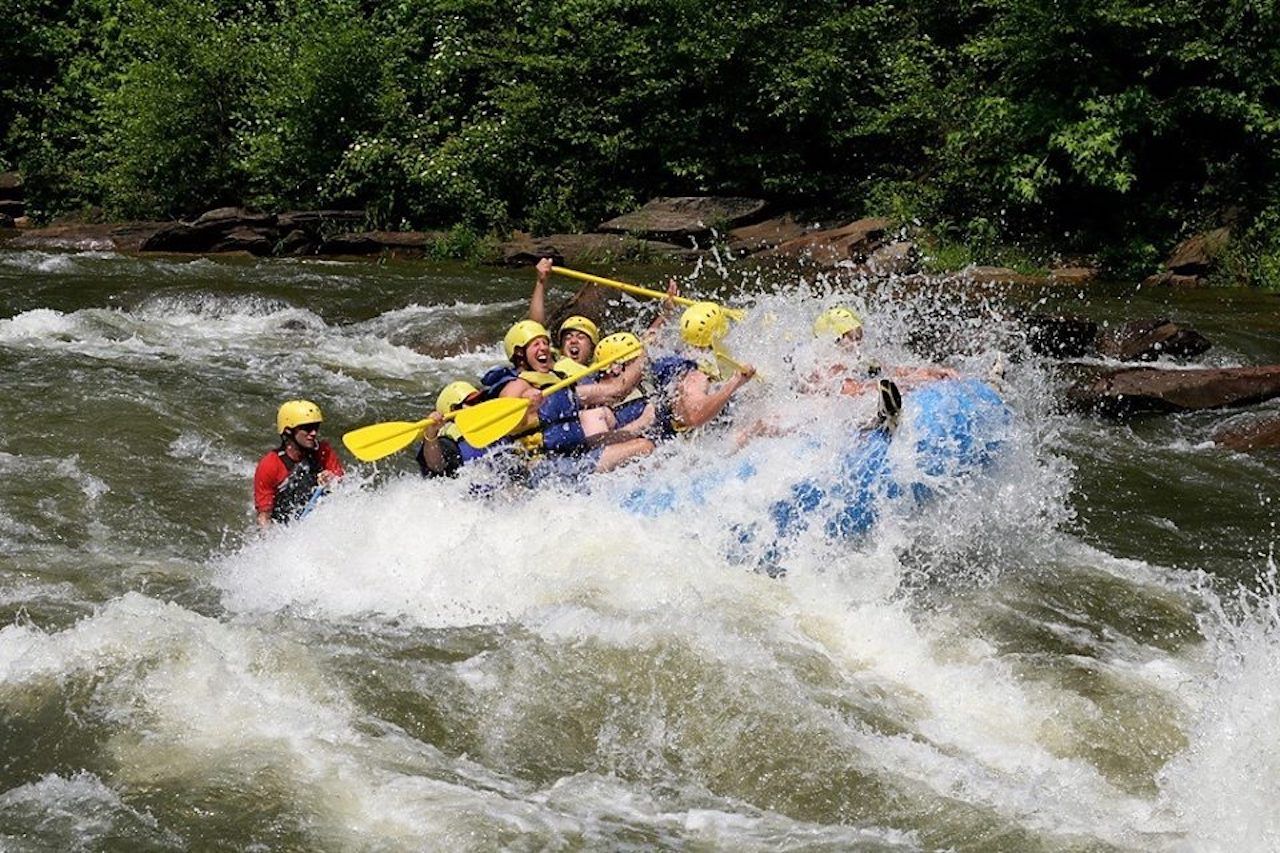 Though the river runs mostly Class III-IV rapids, our guide from Outdoor Adventure Rafting decided to have some fun since most of us were experienced rafters. He’d keep us stuck in hydraulics, so water rushed in waves over the front of the raft cooling and soaking the people in front. He’d purposefully pin the raft against boulders, then once it was set vertically against the rock, we’d climb to the top side of the raft, have a seat, and enjoy the views of the gorge. Beginners were entertained, experienced rafters were thrilled, and the experience alone was worth traveling to Tennessee. 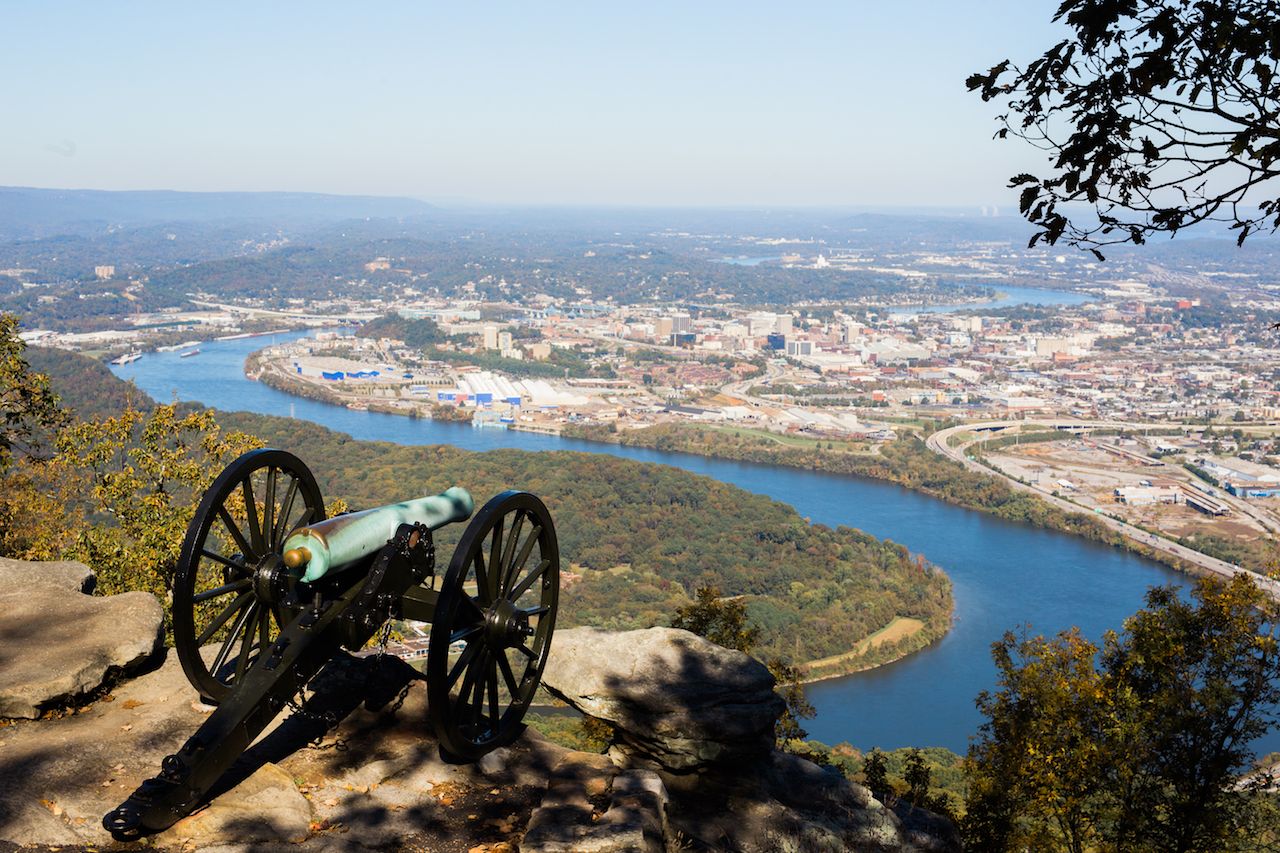 Beyond whitewater, Chattanooga takes full advantage of its mountainous landscape for outdoor fun. It’s become one of the premier rock climbing destinations in America, with the Cumberland Plateau and its Tennessee Wall literally drawing climbers from around the world. Ditto for the bouldering at Stone Fort.

Towering over the city is Lookout Mountain, perhaps Chattanooga’s most noticeable geographic feature with sweeping views over the Tennessee River, the skyline, and the valley beyond. It’s best viewed from the Chickamauga and Chattanooga National Military Park, where a small museum teaches the mountain’s significance in the Civil War. It brings to life the horror one must have faced when standing atop the mountain looking down on waves of invading soldiers. 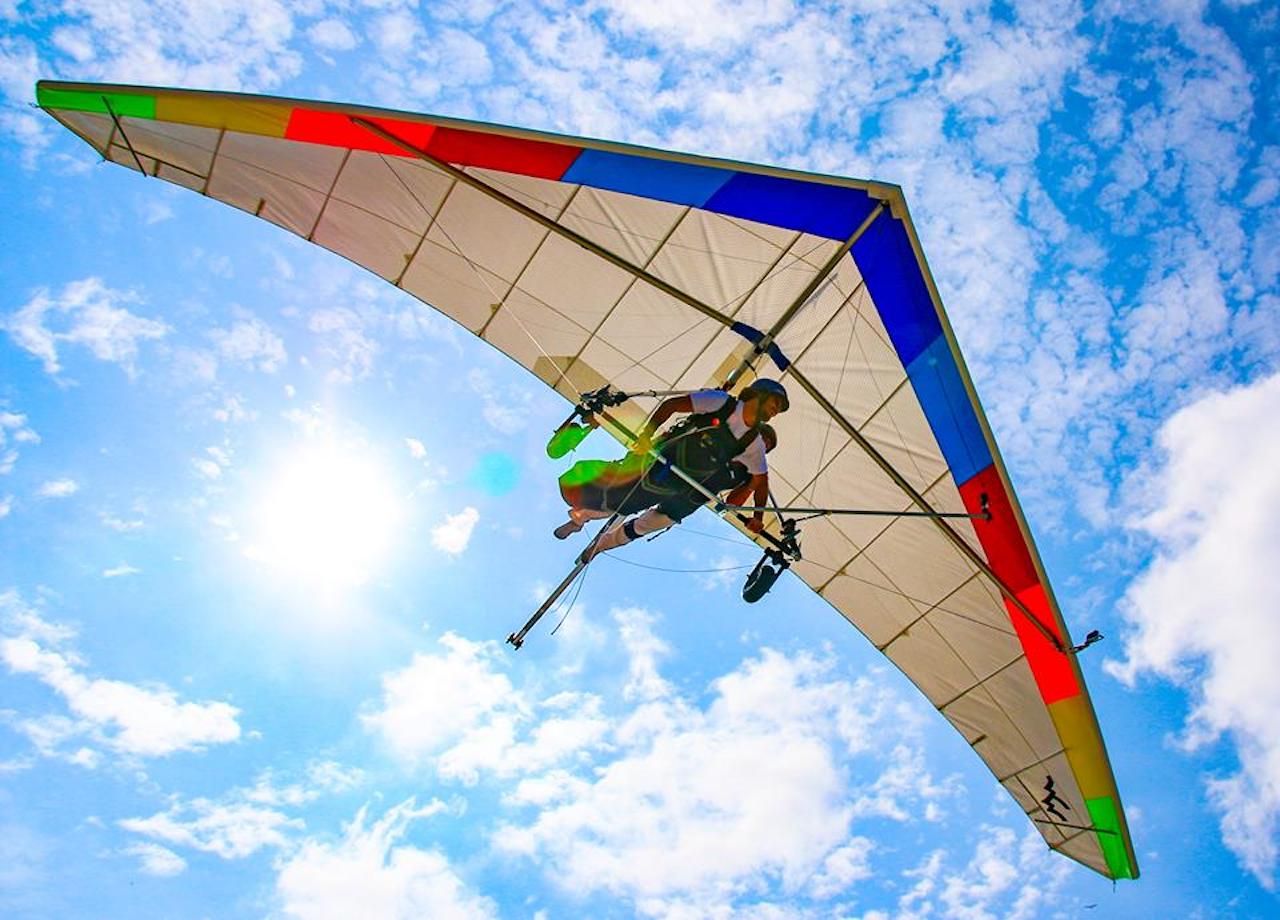 A short drive from the park, you’ll find the Lookout Mountain Flight Park, a sprawling field that’s become a hotbed of southern hang gliding. I took off from the ground as a tiny airplane towed the glider until it released me any my guide at about 1,500 feet. Once we released, the air instantly became silent, and for a brief moment I wondered about the peace birds must feel when they realize they can go anywhere in sight. It’s a place without disturbance from engines, animals, or other people, and — if you’re not afraid of heights — it’s almost meditative. 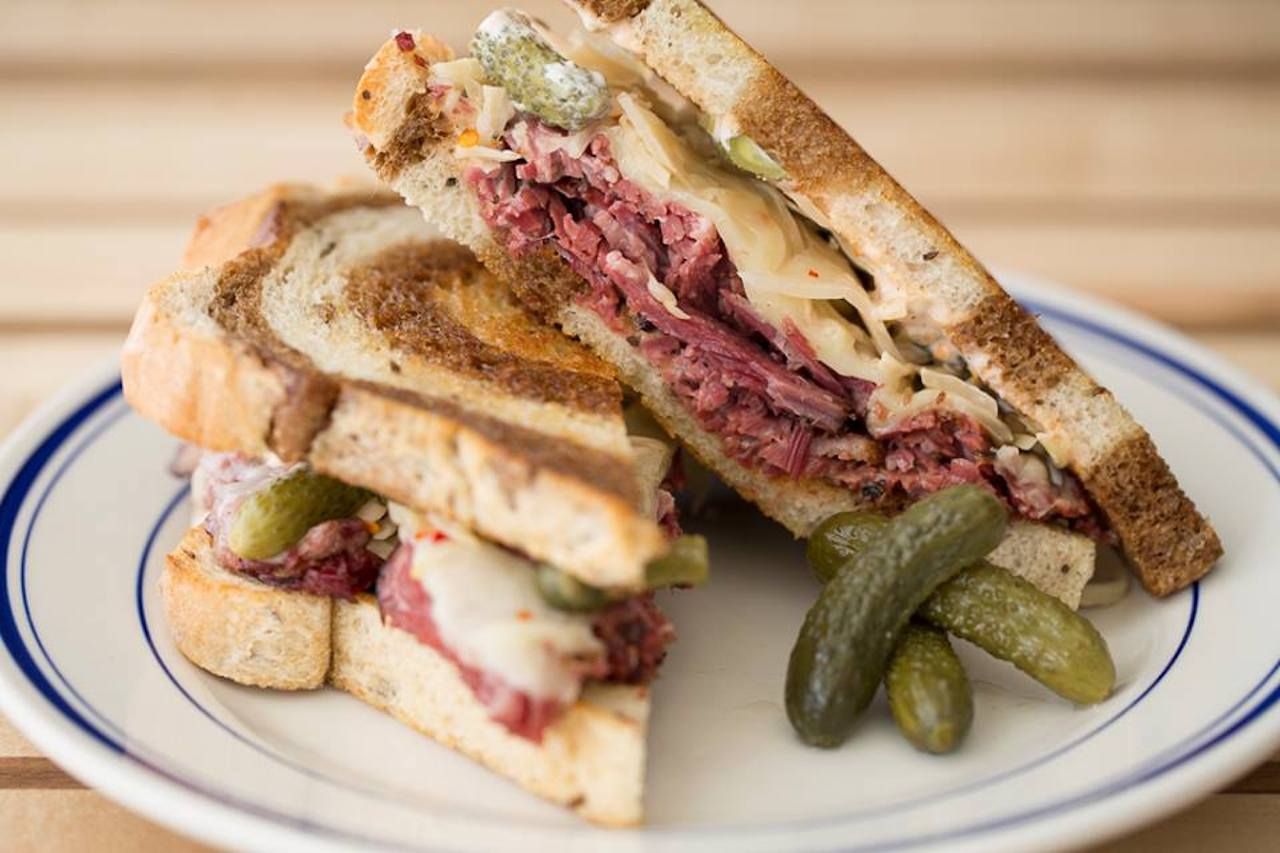 You can fuel up on fresh meats and creative food.

Chattanooga knows that after a hard day on the rivers and rock faces, people will be hungry. And if there’s one thing that makes this small city seem bigger, it’s the food.

To fill back up on protein, look no further than Main Street Meats. The butcher shop and restaurant uses meats from farms in the Tennessee Valley to craft its own salami, sausage, and pate. Because nearly every table has a steaming plate of glistening meat, the place has the thick, savory aroma of cooking meat, a smell that stays on your clothes after you leave. It’s the South, so it’ll be a good base layer of cologne for the rest of the night. But you might want to leave any vegans in your group behind. 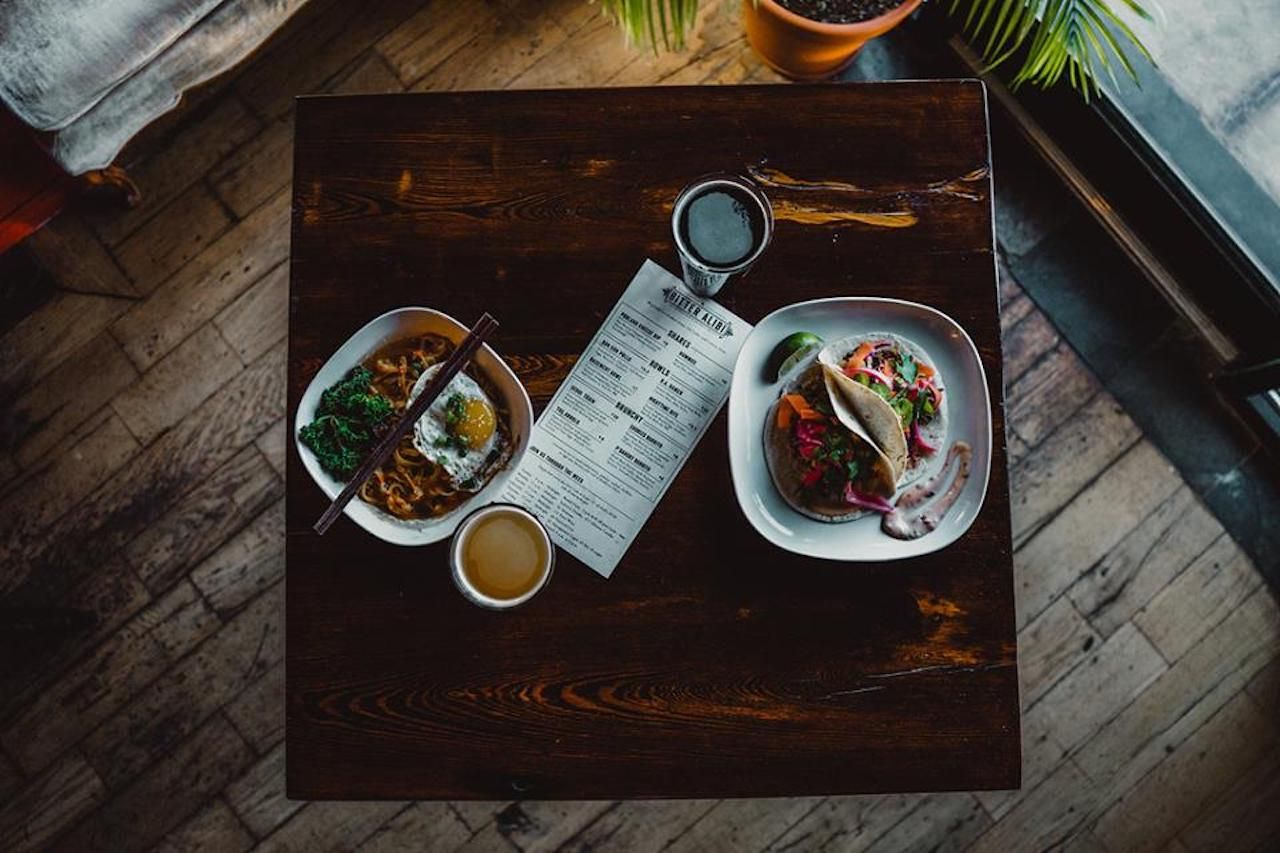 In the MLK neighborhood, Bitter Alibi is a multi-story restaurant and craft-cocktail den that’s about the only thing in Chattanooga that feels mildly like New York. The narrow spaces and extensive drink menu give it the atmosphere of a smash-hit bar in a huge city. Though, while enjoying a plate of bang bang coconut curry on the balcony overlooking MLK, you appreciate that you can still see the sky from the busy street.

The food menu at Bitter Alibi is the sort of varied gastro-pub fare one would expect to find at a horribly overpriced bar in a giant city. But like everything in Chattanooga, the food here is fantastic and far cheaper. Stuff like the Poblano Escobar Burger with a 50-50 chorizo-beef blend and poblano pimento cheese is only $10. Pork belly ramen is $12. The bang bang curry I had on the patio was only $9.50. Add in drinks, and two people can have a meal on par with anything in Atlanta or Nashville for under $40. 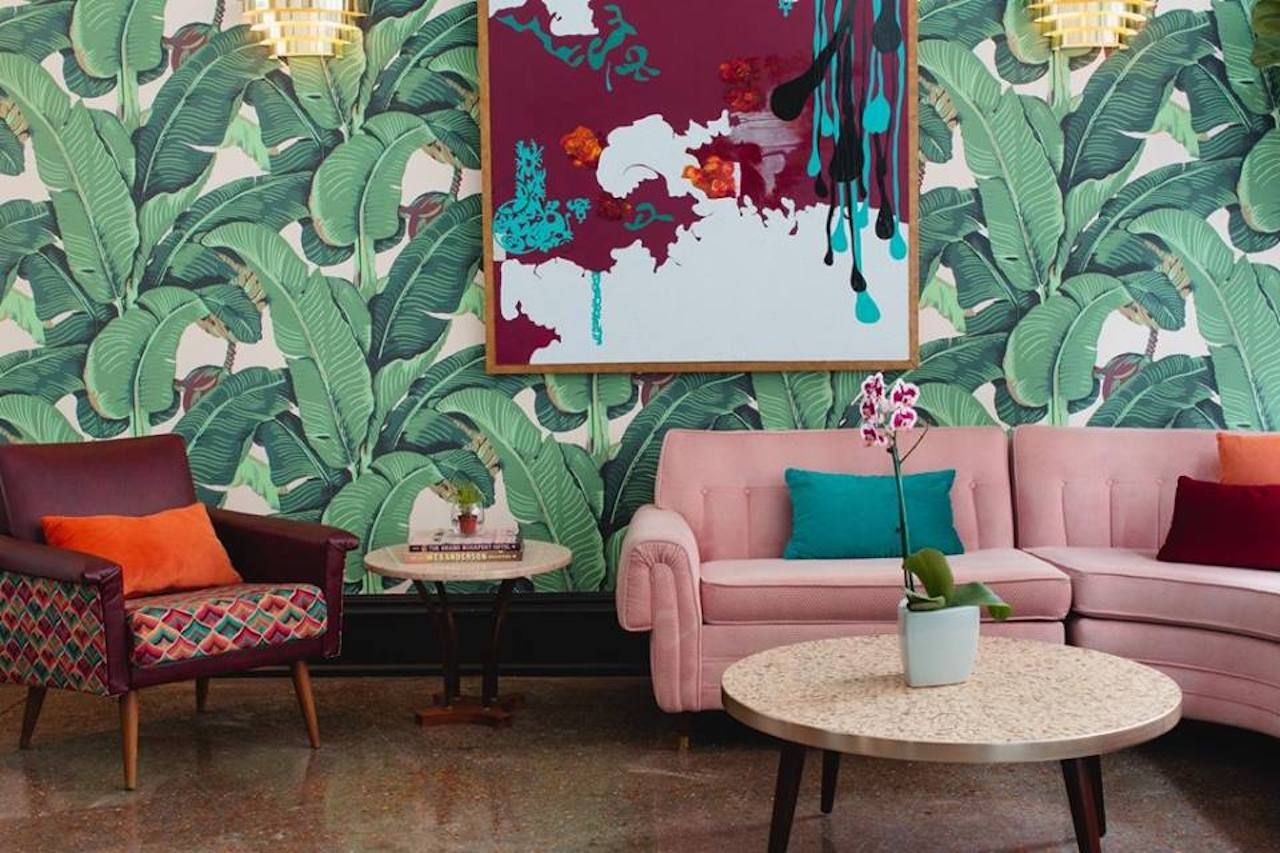 The hotels are anything but boring.

If Elvis, the Golden Girls, and Mad Men all built a house together, it would look like the Dwell Hotel. Owner Seija Ojanpera hand-selected the quirky décor, which includes banana wallpaper, astroturf, framed vintage B-movie posters, wicker chairs, starburst chandeliers, and a gold swan. The place has the feel of a mid-century furniture museum with ‘70s shag and ‘50s deco sitting side by side, filled in with banana plants and tribal art. If you can’t snag one of the 16 suites, settle for dining at the health-minded Solarium Cafe, which is just as zanily designed and looks like it took heavy inspiration from Blanche Devereaux’s bedroom.

Dwell Hotel is far from the only stellar hotel in town; if you find yourself at the downtown Westin, grab a drink at the rooftop’s Alchemy Sky Bar. This was where I found myself on my last night in town, watching the sun set over Lookout Mountain and watching the lights at nearby AT&T Field come on for the Lookouts’ baseball game. Soft country music filled the air, and a warm, slightly humid breeze blew through the semi-outdoor patio. It was a well-deserved drink at the end of an action-packed weekend. 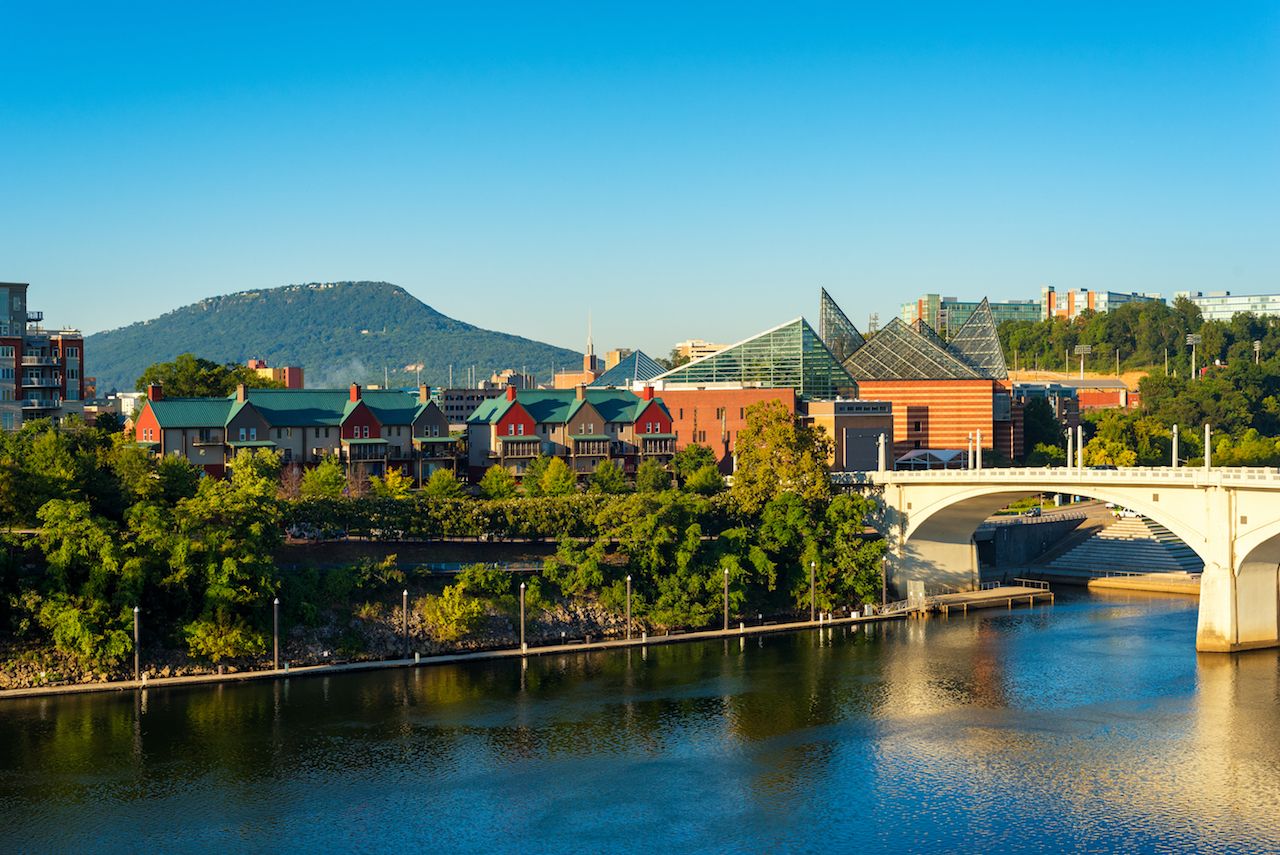 Whether it was messing around on a priceless guitar, rafting, hang gliding, or eating until I had to undo a pants button, Chattanooga filled up my weekend better than a lot of cities 10 times its size. It may not have as many options as some bigger Southern capitals, but what it lacks in endless choices, it makes up for in guaranteed quality. It’s a city that’ll make you realize that sometimes small, unsung cities are even better to visit than the big ones.

Insider GuidesThese 7 US Cities Are Over. Here’s Where To Go Instead.
Tagged
Travel Insider Guides
What did you think of this story?
Meh
Good
Awesome

9 Reasons Chattanooga Is the Adventure Capital of the South

15 Things You're Addicted To After Living in Chattanooga