Determined calèche drivers, peering out of carriages that have clearly seen better days, call out offering rides for less than a dollar. Cracked sidewalks require attention. Trash, bobbing up to the shores of the river, lines the streets and alleys and often attracts stray cats in search of a meal. The scenery is a somber reminder that Egypt — long a destination for visitors to see historical sites including the Great Pyramid, the Great Sphinx, and the Giza Necropolis — has had a rough decade.

The decline in tourism that stemmed from the Egyptian revolution of 2011 was a major hit for a country where tourism contributes billions of dollars in annual revenue and employs roughly 12 percent of the country’s workforce. Social uprisings and international travel advisories prompted tourists to look elsewhere, and the country saw tourist stays decline by more than five million — over 35 percent — between 2010 and 2014, according to a report in The Guardian. From there, they continued to fall.

Egypt’s political situation began to stabilize in 2014 after current President Abdel Fattah el-Sisi won the vote in a landslide election. Tourism numbers slowly began to climb, led by visitors seeking out sun and sea in destinations along the Red Sea. However, threats of terrorism caused tourism to cities like Cairo and Luxor to remain at a trickle. These threats prompted travel advisories from multiple major countries, including the United States, which had a warning in effect as late as July of 2019. 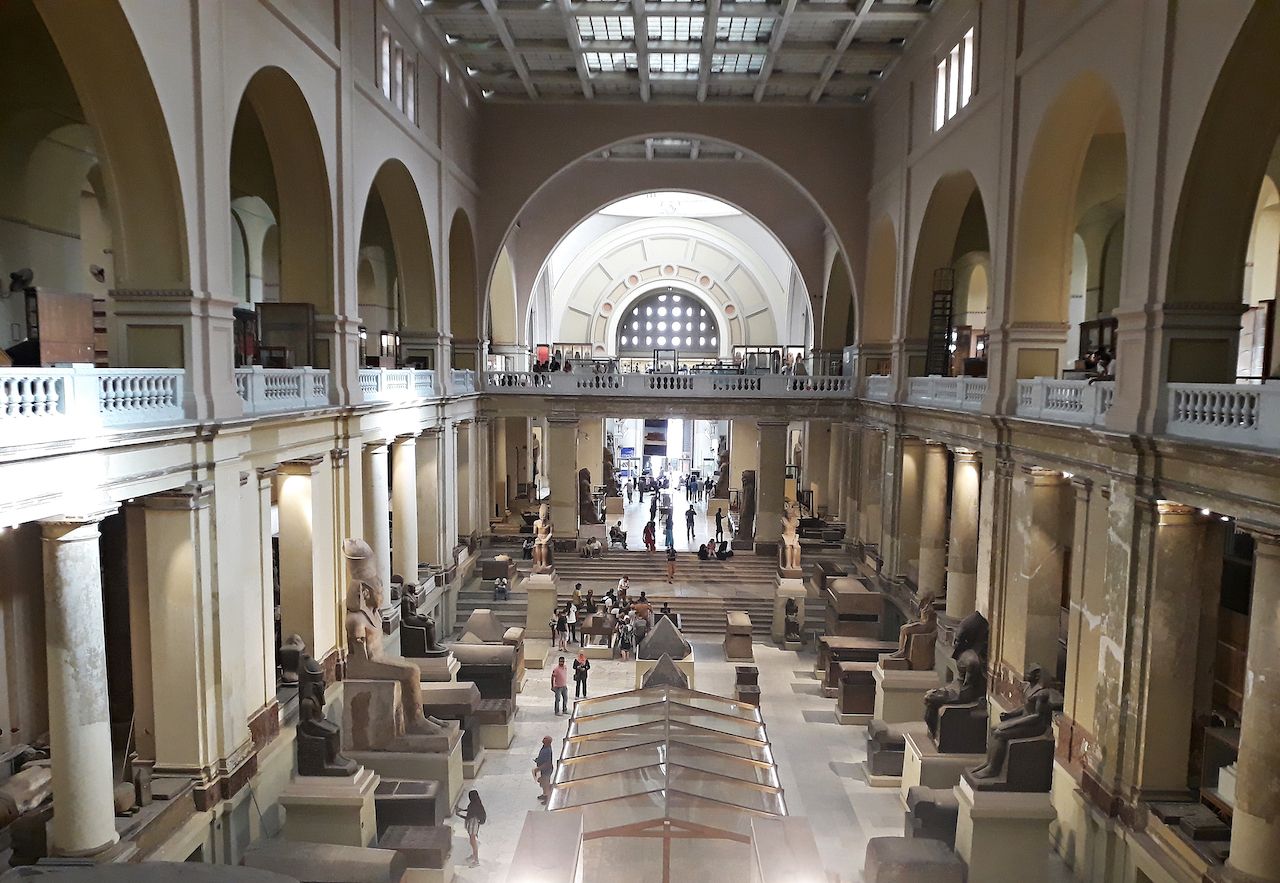 A hefty dose of infrastructure investment was needed. The government’s tourism sector, seeking to boost an economy that provides roughly 10 percent of Africa’s total tourism employment, pumped resources into both security and development, betting that as media reports of social chaos subsided, the traveling public would again be keen to visit a cradle of modern civilization.

Their bets worked. The country saw tourism increase 16.5 percent in 2018 over 2017 numbers, with the same report from the World Travel and Tourism Council predicting the growth to stick. The result is increased new options for tourists such as the soon-to-open Grand Egyptian Museum. This half-a-billion-dollar project promises to be the world’s largest archeological museum once it opens in 2020. It’s been nearly two decades in the making with hopes it will encourage more visitors to spend time in Cairo. This, in addition to other restored archeological sites and infrastructure projects aimed at modernizing the visitor experience, makes the next decade very promising for Egyptian tourism, particularly to its underrated sites. And while the Pyramids of Giza will forever be a must-see, check out these spots for a more unique experience.

In Saqqara, a newly unveiled tomb and the first pyramid 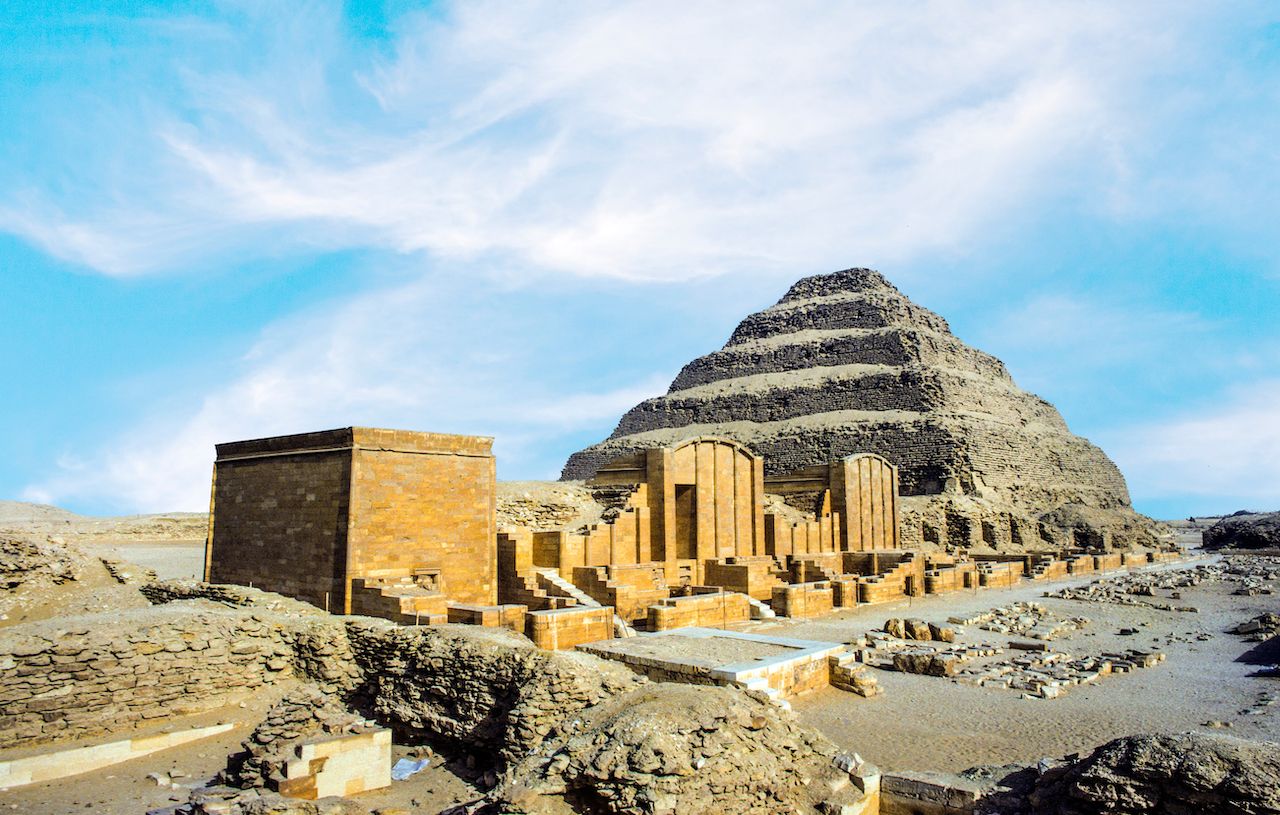 An hour south of Cairo is Saqqara, a necropolis where you can find funerary monuments dating to the Old Kingdom. Here you can visit the Step Pyramid of Djoser, the first pyramid ever built and the catalyst for the trend of ever-more elaborate burials. The vast necropolis of Saqqara contains tombs from almost every period, and you can learn more about some of the archeological finds in this area at the Imhotep Museum.

The Ministry of Antiquities announced in April of 2019 the discovery of a 4,300-year-old tomb of Khuwy, believed to be related to the pharaoh Djedkare Isesi. Another recent opening is the Serapeum of Saqqara. A massive underground gallery at Serapeum supposedly served as a resting place for the Apis bull, which was believed to embody the gods Sorok, Osiris or Ptah. The Serapeum remains shrouded in mystery, however, as none of its giant granite sarcophagi have been found with an Apis bull mummy still inside. 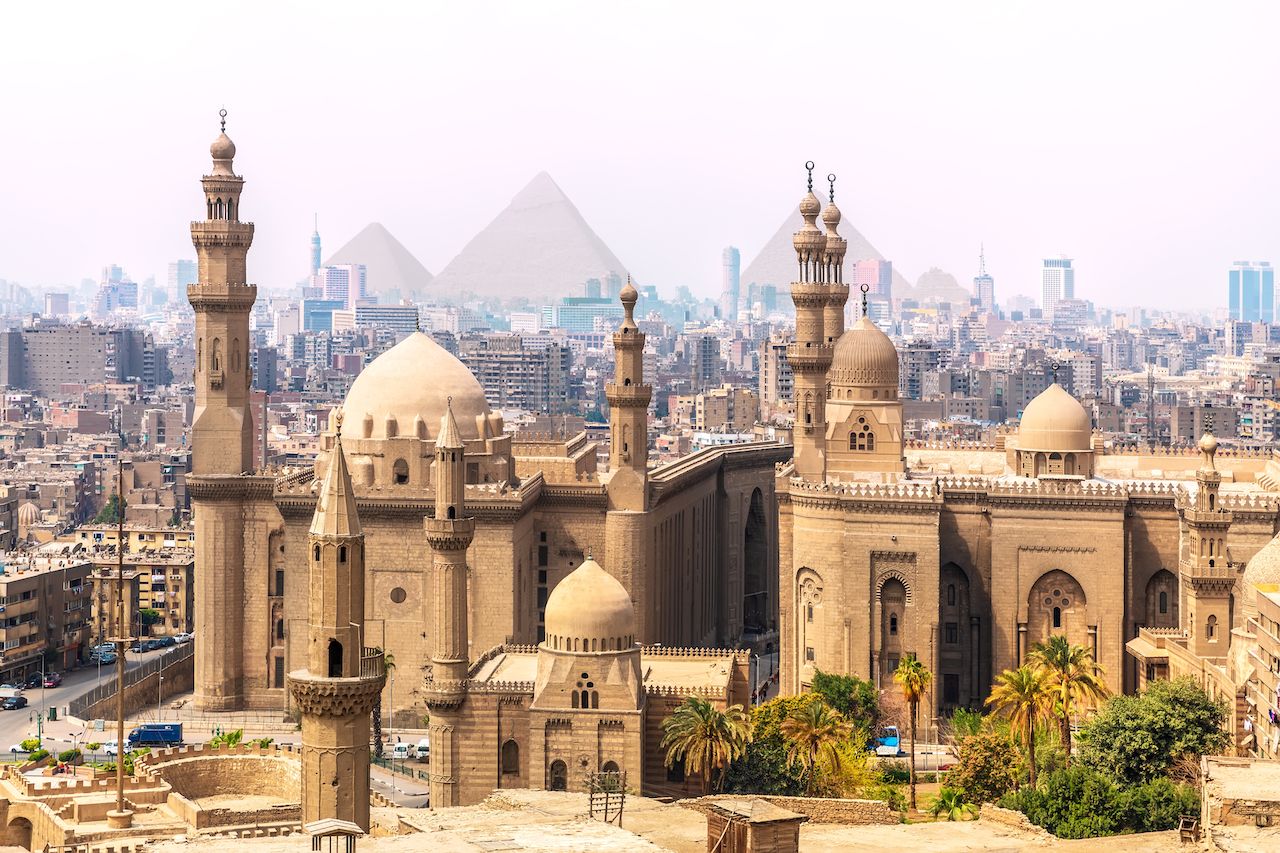 Once you’ve had your fill of ancient history, get ready to explore Islamic Cairo. The Islamic conquests brought the religion to Egypt and have since dotted the city skyline with impressive mosques, earning Cairo the moniker “city of a thousand minarets.” The Mosque of Mohammed Ali is worth a visit both for the breathtaking panoramic views of the city it offers and for its picturesque courtyard covered in alabaster. One outstanding feature of the courtyard is the brass clocktower given to Mohammed Ali by King Louis Philippe of France in return for the obelisk from Luxor that now stands in the Place de la Concorde.

Just a few minutes away, you’ll find the Sultan Hassan Mosque, an architectural marvel, especially when you learn it was built in the 1300s. If you’re a fan of Islamic architecture and interested in visiting more mosques, the Al Azhar mosque is worth a stop, and you may even recognize its beautiful white-marble courtyard from the Instagram feeds of other tourists.

Another part of the city worth touring is Coptic Cairo. The history of the Copts itself is unique as many of them can actually trace their ancestry to Ancient Egyptians. Copts practice Christianity, and this part of the city’s southern expanse is where they believe the Holy family rested during their journey to Egypt. The site is home to the Saints Sergius and Bacchus Church, which date back to the fourth century. The historic Hanging Church is located on this same site, and although the date of its construction is disputed, what is known is that a church has existed on this site since the third century.

Near the Hanging Church you will find the Babylon Fortress, which dates back to Roman times. Historic records attribute the building of the fortress to different persons — in one version it was built by rebellious prisoners from Babylon who refused to be enslaved by the pharaoh, and another version attributes it to Nebuchadrezzar, the Babylonian king who occupied Egypt in the sixth century.

Then head to Luxor, but skip the charge for King Tut 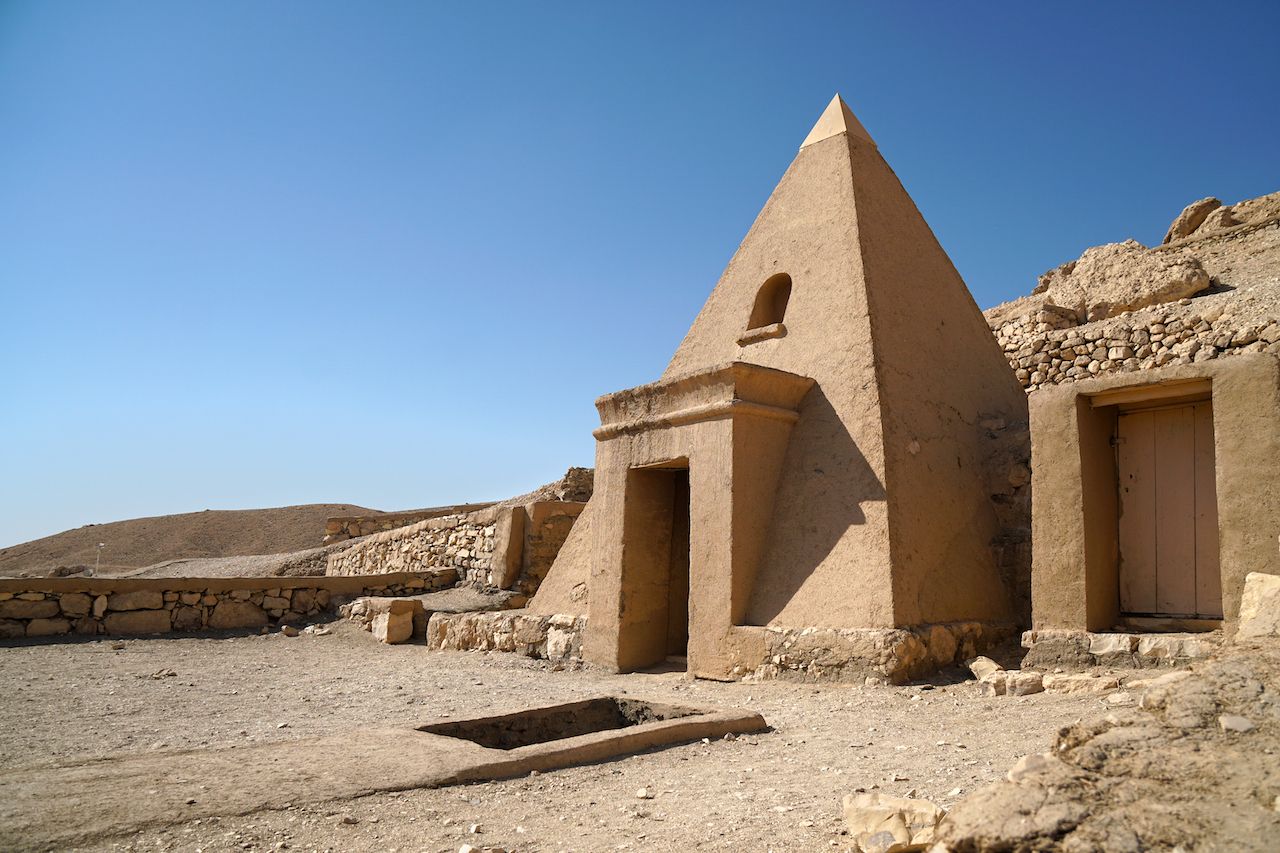 Despite Cairo’s offerings, if you’re coming to Egypt with limited time, Luxor should be first on your list. The Valley of the Kings in Luxor’s West Bank remains one of the top attractions as tourists flock to visit the tomb of King Tut. Although infamous, its appearance pales in comparison to some of the other tombs in the Valley of the Kings. Construction of the pharaoh’s funeral chambers began at the time he assumed rule and continued through the duration of his reign. So, the longer one ruled, the more impressive the tomb.

Skip the extra fee for the boy king’s burial site and instead visit the more impressive tombs of Tausert & Setnakt, Ramses III and Ramses IV. Do spend the extra few dollars to gain access to the tomb of Ramses V and VI, which is arguably one of the best-preserved and striking ones you can currently visit. A ticket to The Valley of the Kings costs 240 Egyptian pounds, about $15, and includes a visit to the three tombs. The tombs of Tutankhamun, Seti I, or Ramses V/VI can be visited for an additional charge.

While tour buses carrying daytrippers and Nile cruisers arrive in throngs to the Valley of the Kings, the tombs at neighboring Deir el-Medina sit practically undisturbed. Reviews say all you’ll find there is a “pile of rocks” of what was once a worker’s village. But what these reviews fail to note is that this village was home to the workers tasked with designing the tombs of the pharaohs and that these talented artists actually decorated their own tombs. Venture down the steep stairs and into small chambers where you’ll be welcomed by a dazzling artistic depiction of what everyday life was like for these Egyptian artisans and workers. It’s truly a sight to behold, gazing upon artwork created thousands of years ago.

Take in the Karnak Temple Complex 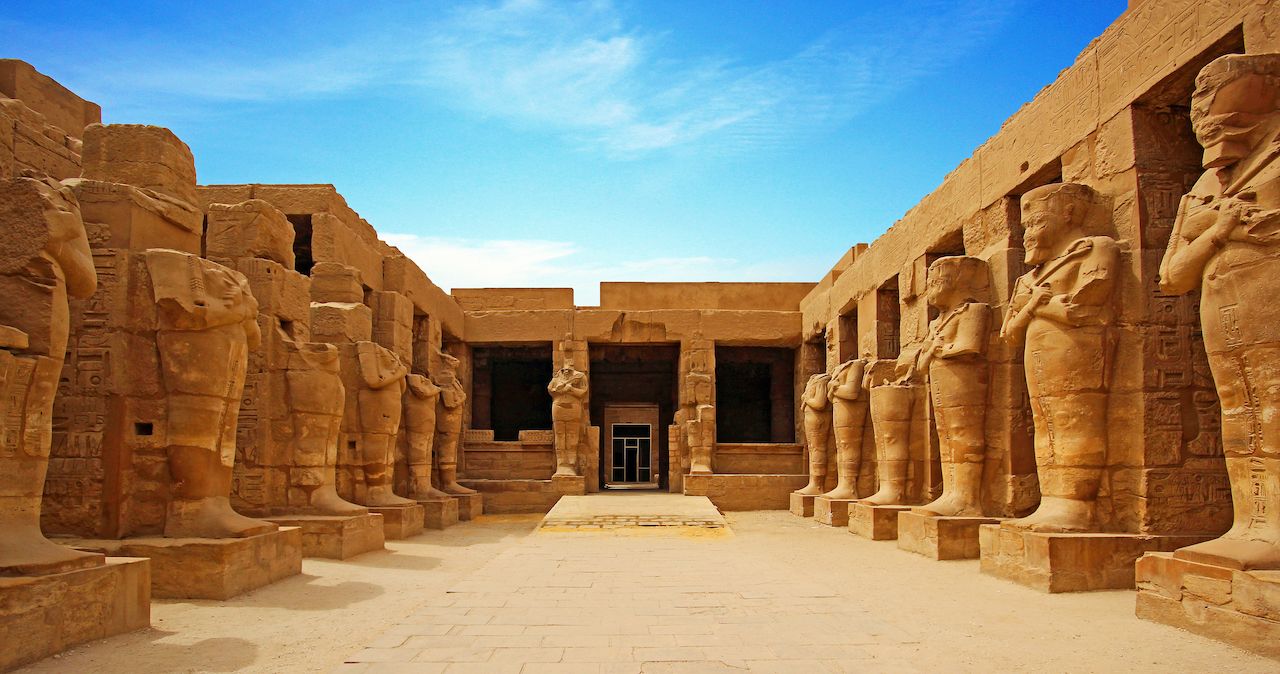 Temples may appear to be a dime a dozen in Luxor, but some are truly worth visiting. The Karnak Temple Complex in Luxor’s East Bank is a hotbed of historical material. Karnak is a collection of temples recognized as one of Egypt’s top attractions with structures dating from the Middle Kingdom to Ptolemaic times, which ended in 30 BC. Exploring this vast open-air museum can easily take hours. Most visitors beeline to the Hypostyle Hall, a massive structure constructed during the 19th dynasty and supported by 134 immense columns. Take a moment to stare up at the massive columns and see if you aren’t left astounded at the innovation and tenacity of the ancient Egyptian architects.

Most visitors don’t venture farther out into the complex, but one further temple is especially worth visiting: the Temple of Khonsu. Its gateway is located at the end of the avenue of sphinxes, a one-and-a-half-mile path connecting Karnak to the Luxor Temple. Currently, the avenue is closed in hopes that the city can restore it to its former grandeur, when it served as the main thoroughfare for religious and celebratory processions. The Temple of Khonsu provides an example of what a complete structure would have looked like in the New Kingdom at the height of Egypt’s power.

End your tour at Medinet Habu 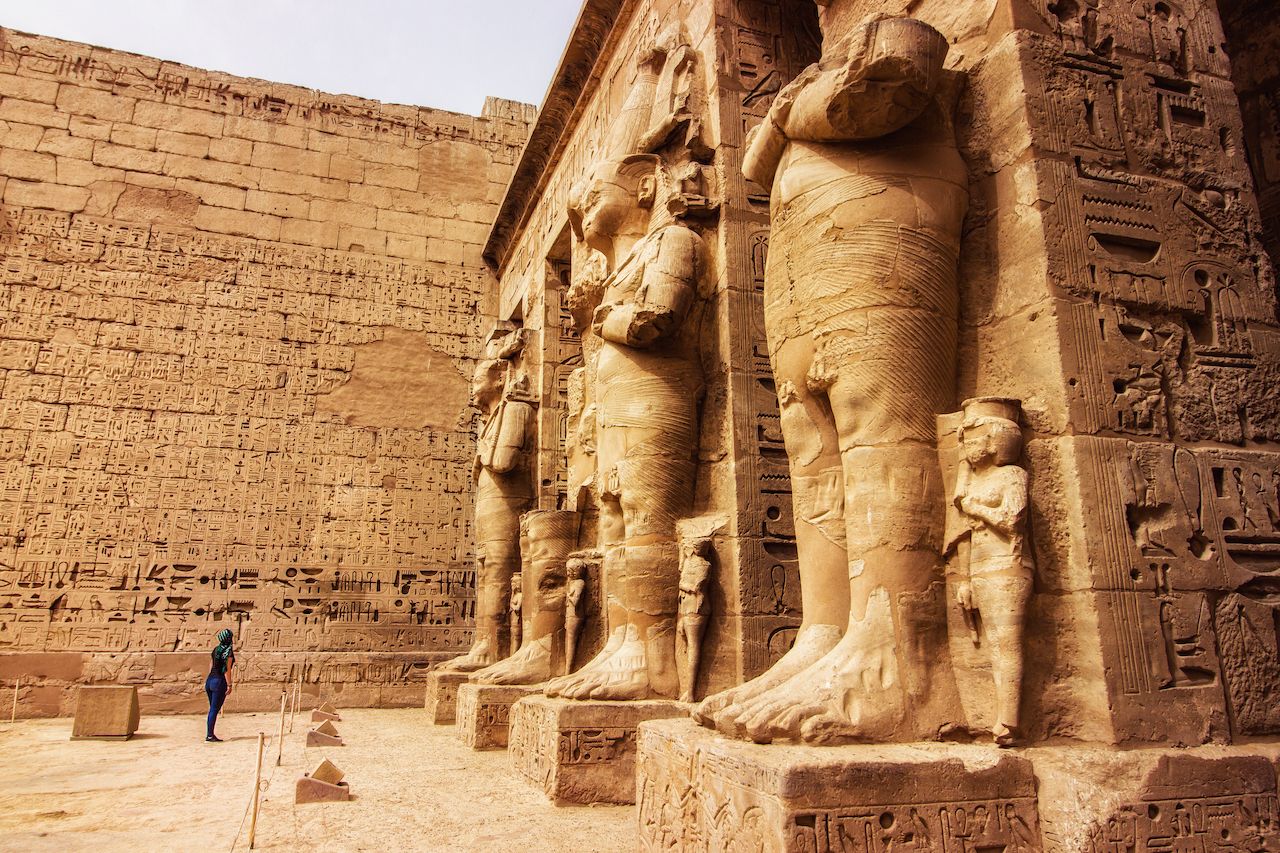 You’ll find even fewer visitors at Medinet Habu, the location of the mortuary temple of Ramses III, who is recognized as the last great pharaoh of Egypt. The temples at Medinet Habu appear well-preserved with a great deal of color still to be seen on its walls and ceilings, making them a favorite of many Egyptologists studying the area and working for its preservation. Pylons of the temple are adorned with reliefs depicting Ramses III’s victories over Egypt’s enemies. Being here makes you wonder how beautiful it all must have looked in the days of the pharaohs. Other temples at Medinet Habu were constructed by Hatshepsut and Tuthmosis III, two other renowned pharaohs of the New Kingdom: Hatshepsut, the powerful female pharaoh whose legacy was nearly wiped from history, and Tuthmosis III, the creator of the largest empire Egypt had ever seen.

To learn more about the aforementioned female pharaoh visit Al-Deir Al-Bahari. As ancient Egypt’s most powerful queen, the stories of how she assumed and maintained power are truly captivating. To understand the influence she had over people, stroll through the mortuary temple constructed for Hatshepsut by the architect who was believed to be in love with her. Despite an attempt by Tuthmosis III to wipe out the legacy of Hatshepsut, her reign continues to captivate historians and increasingly proves just as alluring to visitors.

If your budget allows it, we recommend hiring an Egyptologist through a reputable tour agency. Their expertise and knowledge of hieroglyphics will allow you to better understand the significance of each of the sites you visit. Djed is both professional and affordable, with most day trips running between $30 and $100 per person depending on length and destinations, though the company also offers custom excursions.

Art + Architecture7 of the Coolest Ancient Temples in Egypt and What To See in Each
Tagged
Archaeology Culture Museums Insider Guides Egypt
What did you think of this story?
Meh
Good
Awesome