In the winter, people always say they look forward to getting a tan, but beach season proves those people to be all talk. Sure, they haul out their blankets and chairs, strip down to their swimsuits, and roast for way longer than the doctor would recommend, but it’s still just a half measure. Most people aren’t getting tans—not really—because they’re keeping parts of their bodies covered up in the name of “decency.”

That’s why we should turn to the real tanning aficionados. These brave souls confidently shed their clothes—swimsuit included—before the gawking eyes of the entire beach. These people, and the beaches that welcome them, understand what the stuffy, puritanical beachgoers of yesteryear won’t admit. Bare is beautiful. Nude is the future. Unsurprisingly, California is ahead of the curve when it comes to progressive beachgoing. While you can find nude beaches across the US, if you know where to look, nude beaching is a way of life in California like nowhere else. Whether it’s San Diego’s famous Blacks Beach or the more low-key Devil’s Slide Beach in Half-Moon Bay, these are the best nude beaches in California. 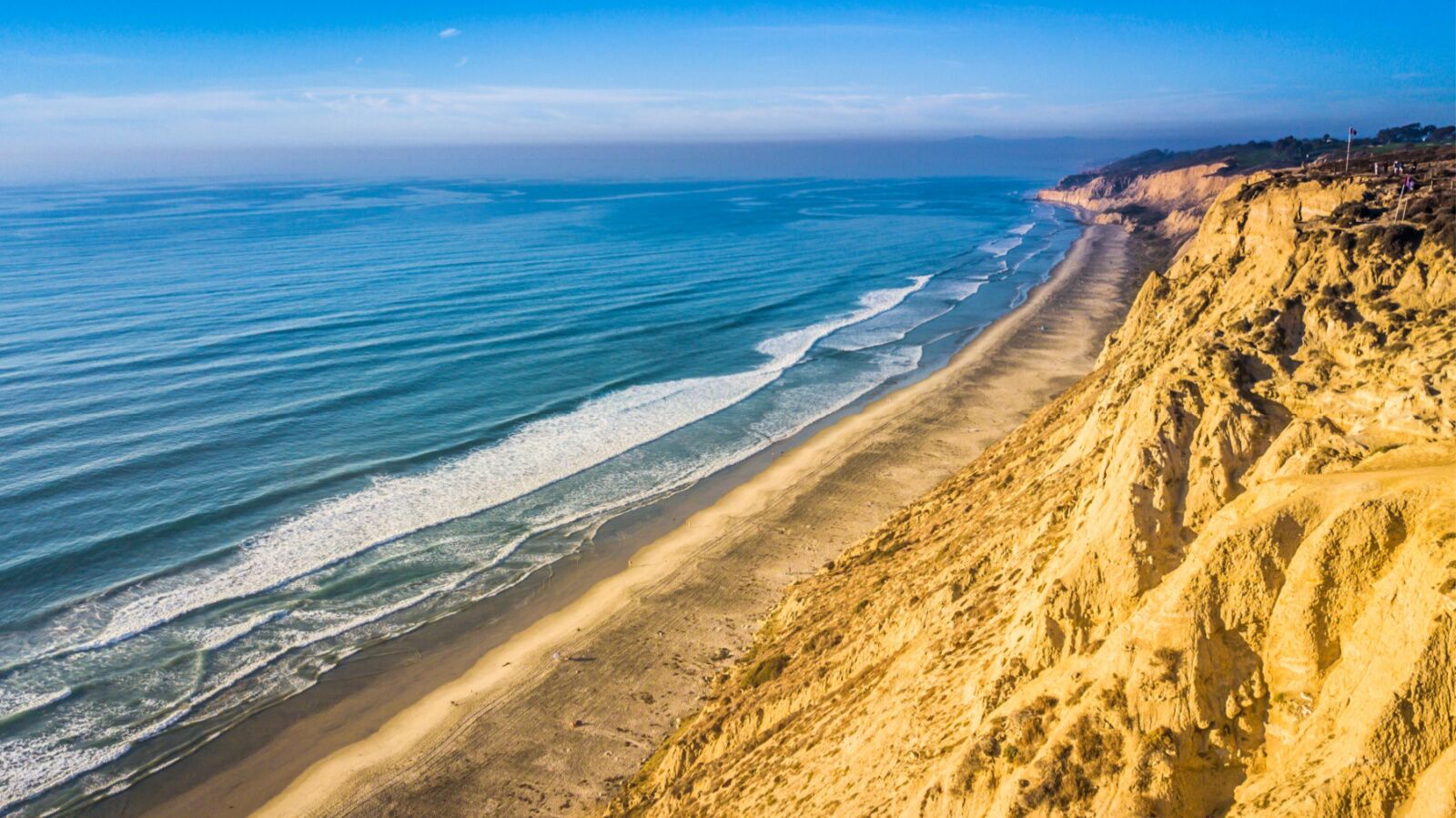 Blacks Beach in La Jolla, San Diego, is one of the most popular nude beaches in California. Accessible via a steep, scenic, and winding trail from Torrey Pines Gliderport, the beach is known not only for nude sunbathing but also for nude sports like volleyball. The whole beach is nudist-optional, though the section north of the trailhead attracts the most nudists. Given its popularity, it tends to get extremely crowded, so if you’re not prepared to bare it all in front of a large crowd for the first time, a more secluded beach may be preferable. 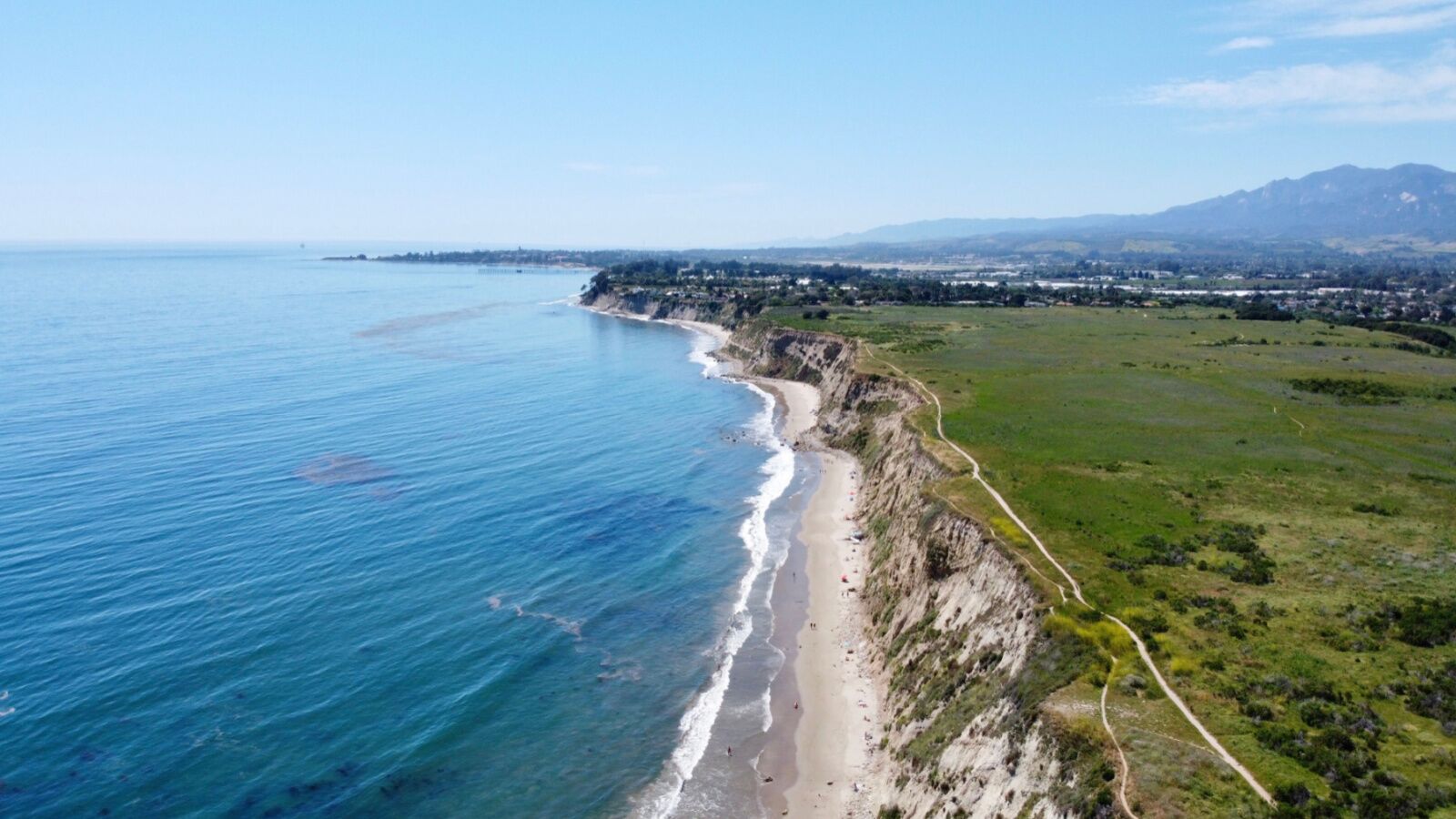 In the shadow of the Santa Barbara bluffs, between the USCB campus and Hope Beach, you’ll find the nude Mesa Mesa beach. Follow the pedestrian access path to the grove of eucalyptus trees to reach the beach. Make sure to stay to the north of the trail, as the south is designated for non-nude beachgoers and is often frequented by families. Contrary to the stereotypical perception of nude beaches being filled with octogenarians, this beach’s proximity to USCB means it’s largely popular with college students, making for a younger and more lively feel. 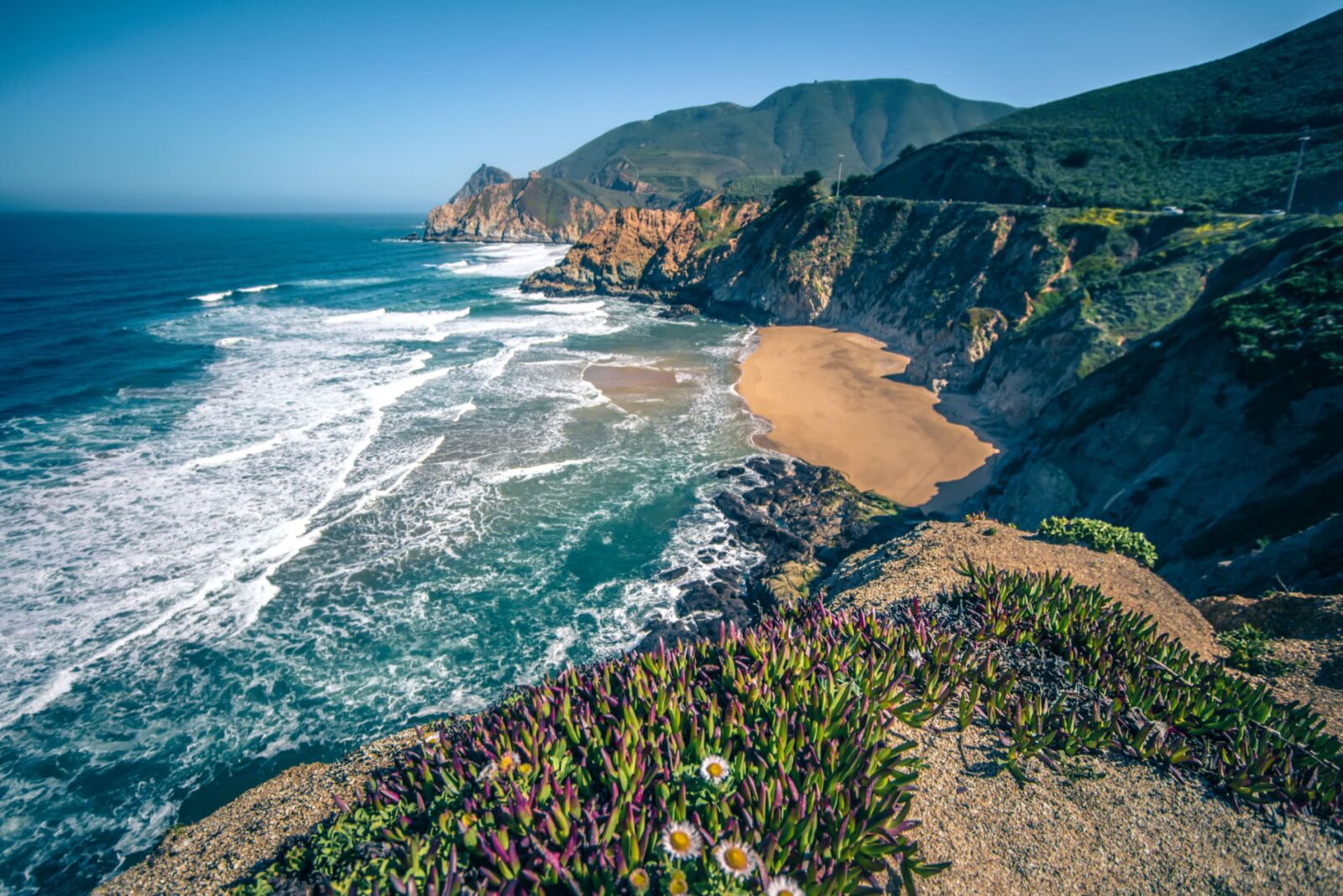 Devil’s Slide Beach has it all: towering bluffs, wildlife, and nudity. Sitting under the coastal bluffs, the beach is also known as Gray Whale Beach due to the whales that often swim past in the spring. The waters are also home to great white sharks, however, so take care when entering the ocean. While it might sound like a misnomer for such a beautiful place, the name actually comes from the landslides caused by erosion in the area, making for some pretty impressive geological formations. Take note: Nudity is only permitted on the north end of the beach. 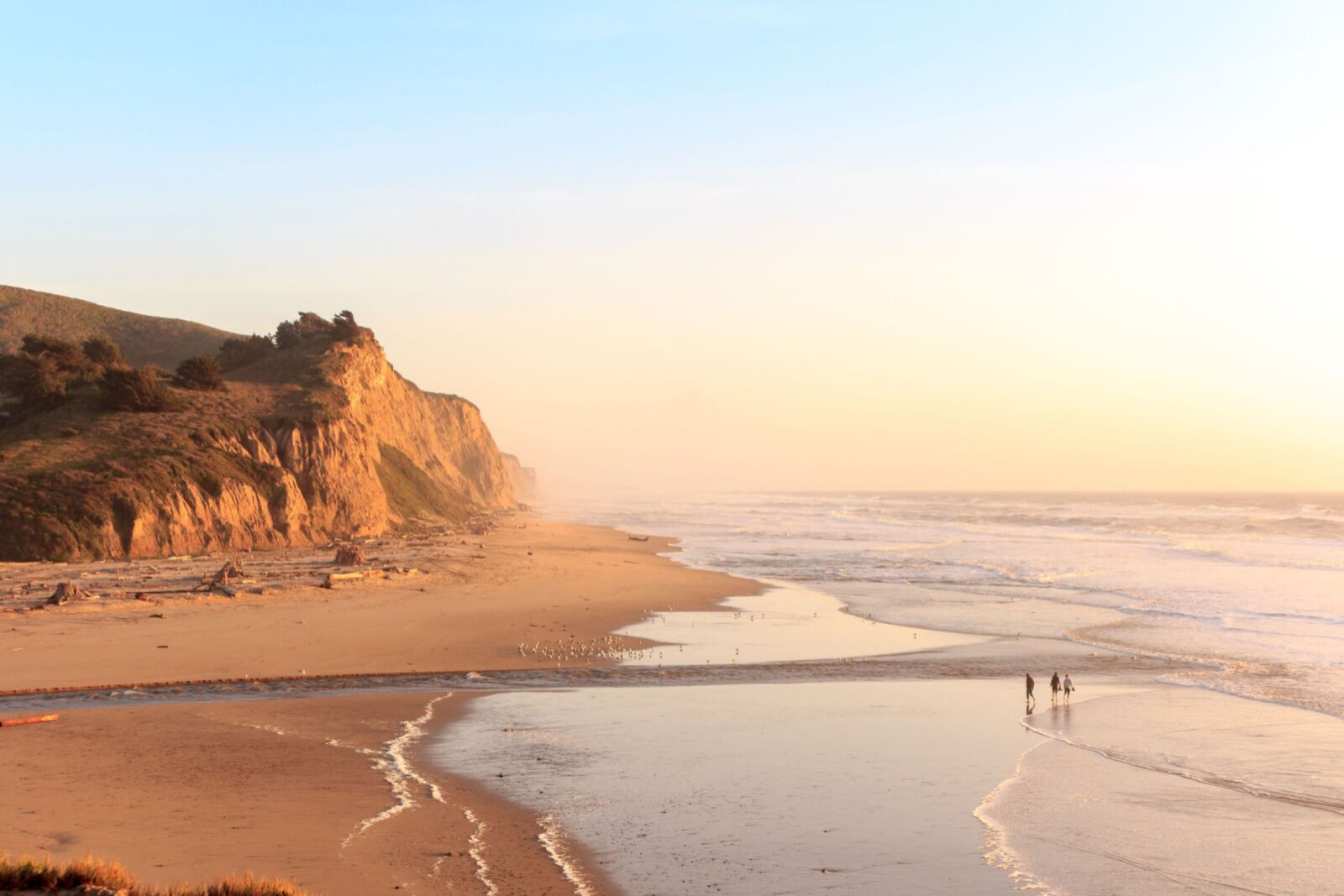 Spanning a massive shoreline in San Mateo County, San Gregorio Beach is home to several sea caves formed by wave erosion. It’s mostly known, however, for its gay scene and as one of the most accepting and inclusive beaches in California. The north end of the beach is the part where nudity is allowed (and encouraged), and even farther north is the most popular with gay beachgoers, but the south part of the beach is clothes-only—so sunbathe accordingly!

2222 Beach has long been an unofficial nude beach and a favorite of Santa Cruz locals. Accessible via a winding path and hidden beneath a residential neighborhood, this beach is a perfectly private place to catch some rays, as there are rarely more than a few dozen people here. In case you’re wondering, the beach’s rather unusual name comes from the street number of the house just across the way. 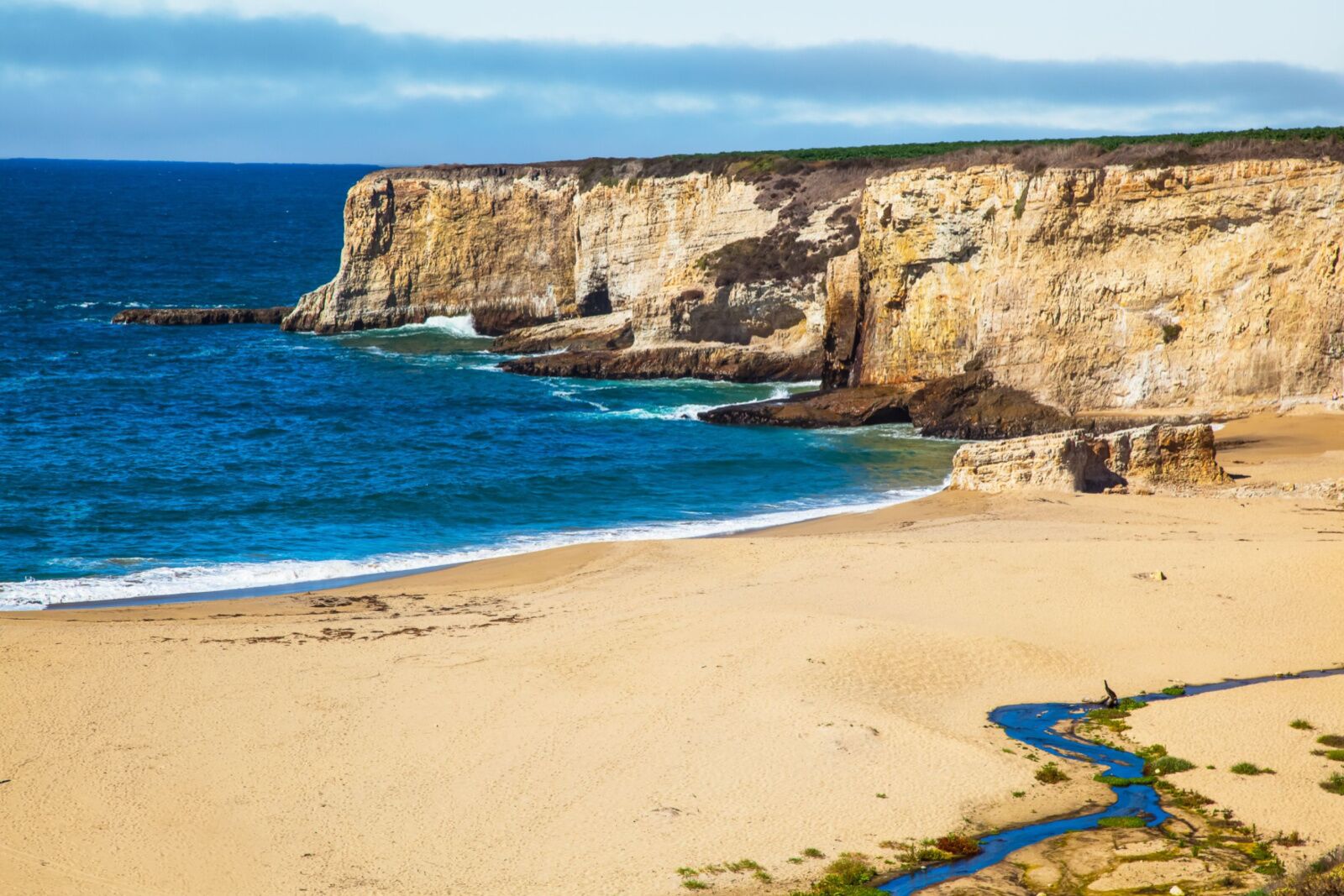 It might sound like a beach in the Scottish Highlands, but it actually lies at the southern end of Davenport. The wide beach is surrounded by nature and divided into separate coves by tall cliffs. While not officially considered a fully nudist beach (so expect to see some clothed beachgoers), Bonny Doon is a well-known naked beach and broadly tolerant of the practice. So don’t feel shy about stripping down. There’s also an annual gathering of nudists here on New Year’s Day, to ring in the new year with a brisk beach sesh. 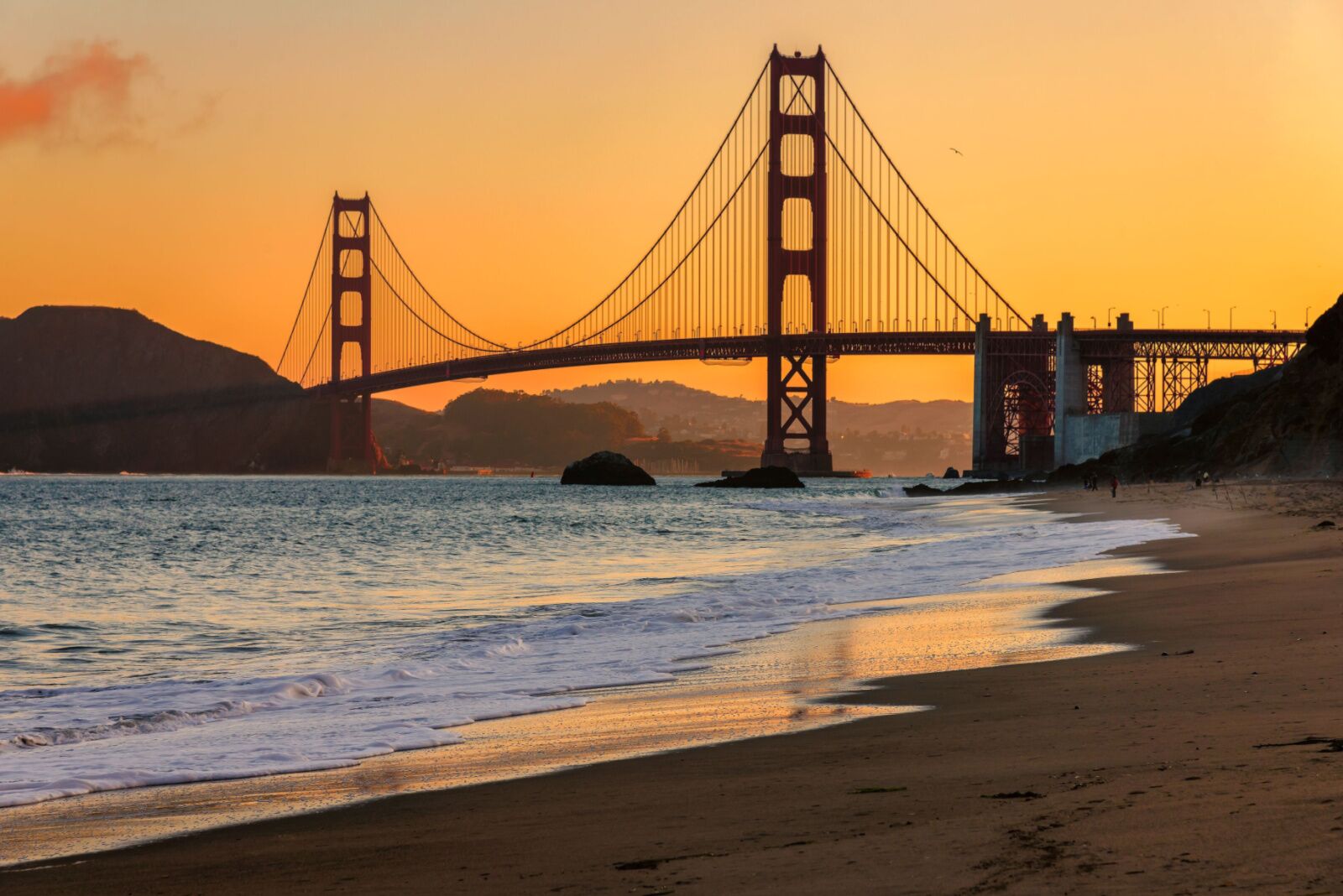 San Francisco is famous for embracing a wide range of lifestyles, and that includes naturism. Apart from its nudist reputation (on the northern side), Baker Beach is also famous for its view of the Golden Gate Bridge, as well as its storied past as the original venue for Burning Man (1986–1990). Thanks to its stunning bridge views, the beach is particularly good for lounging and sunbathing, though strong currents and cold temperatures don’t make for the best swimming conditions. 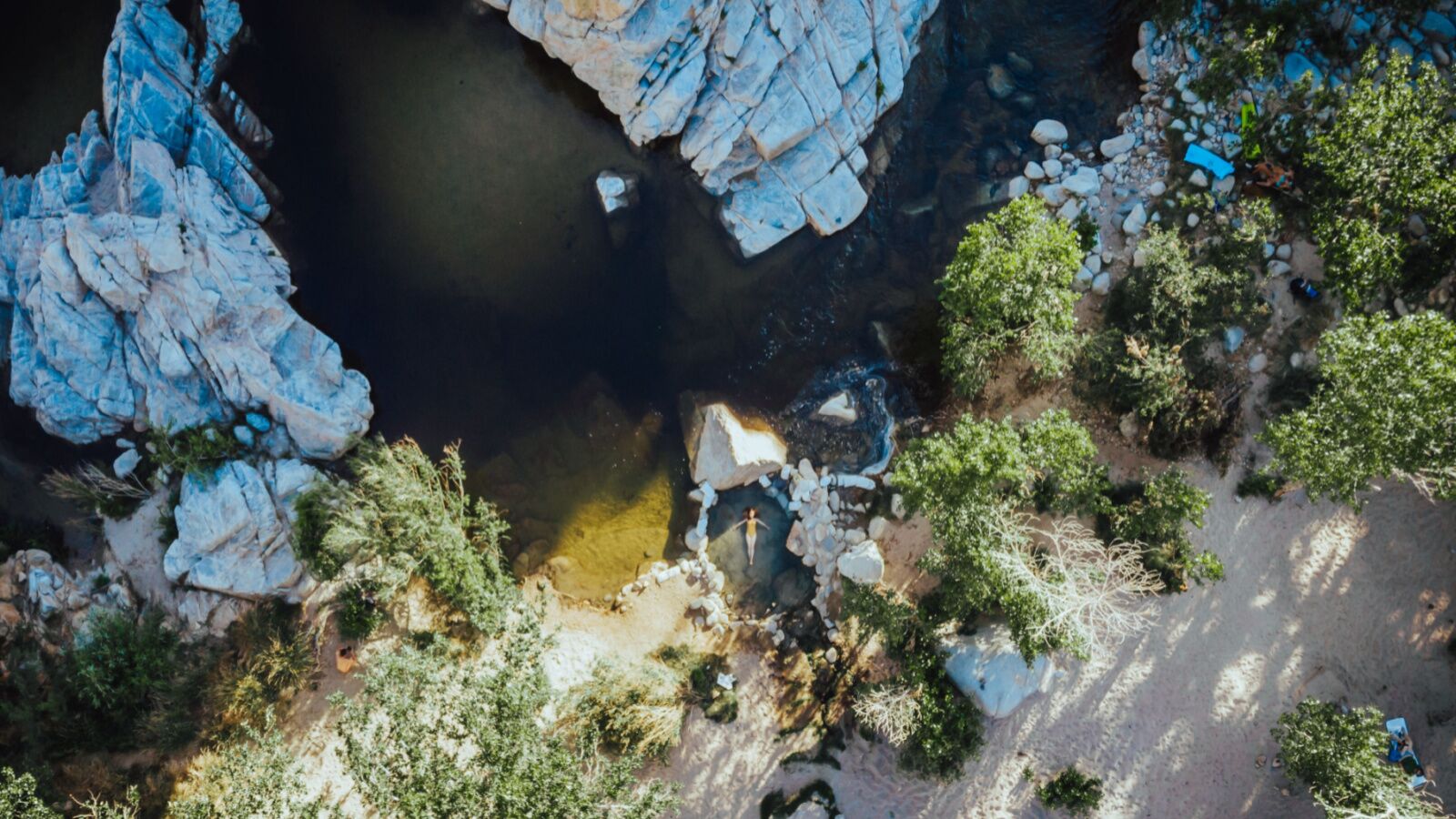 While not technically a beach, you won’t exactly mind when you’re lounging in these restorative, clothing-optional hot springs. There’s a small sandy beach and pools of varying temperatures, from 100 to 105 degrees. The largest pool is big enough for swimming, while the smallest can only accommodate a few people at once, so you might need to get cozy with some nude strangers. You’ll have to tackle a short hike to get to the springs, but the incredible views and soothing pools are worth it. And since the whole area is clothing optional, you can even hike nude…if that’s your thing.