Nova Scotia hangs off of Canada’s eastern coast, almost entirely surrounded by the sea. At the northeastern end of this small province, Cape Breton Island is a world of towering cliffs, wild shorelines, and Gaelic ancestry. From one of the world’s most beautiful road trips to marine wildlife to outdoor pursuits, and from local crafts to excellent seafood, Cape Breton feels like a well-deserved retreat in a largely untouched region of Nova Scotia. Here’s how to enjoy it.

1. Drive one of the world’s most spectacular roads. 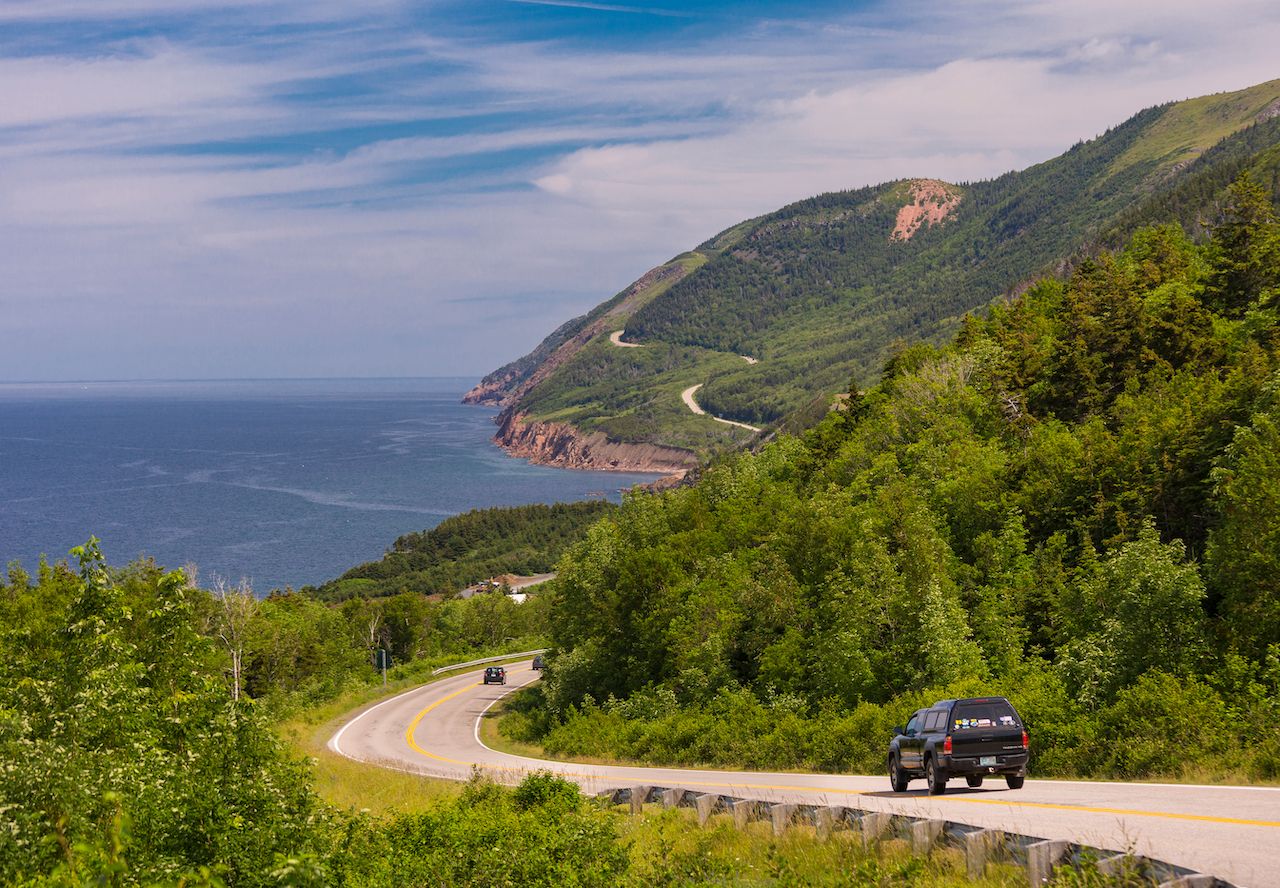 After flying into Halifax, you’ll drive about three hours before crossing over the unassuming Canso Causeway onto Cape Breton Island. Soon you’ll hit the John Cabot Trail. Named after explorer John Cabot, the 185-mile-long Cabot Trail hugs most of the island’s coastline, cutting across the north end of Cape Breton alongside Cape Breton Highlands National Park. It’s rightly regarded as one of the most stunning roads you can drive.

The choice is yours to drive the Cabot Trail clockwise or counterclockwise. The trail can be driven in eight hours, but depending on how much hiking and sightseeing you opt for along the way, consider taking three to four days. That gives you plenty of time to explore the fishing communities, sample variations of the island’s seafood chowder, pursue outdoors activities, and gaze at the amazing views. 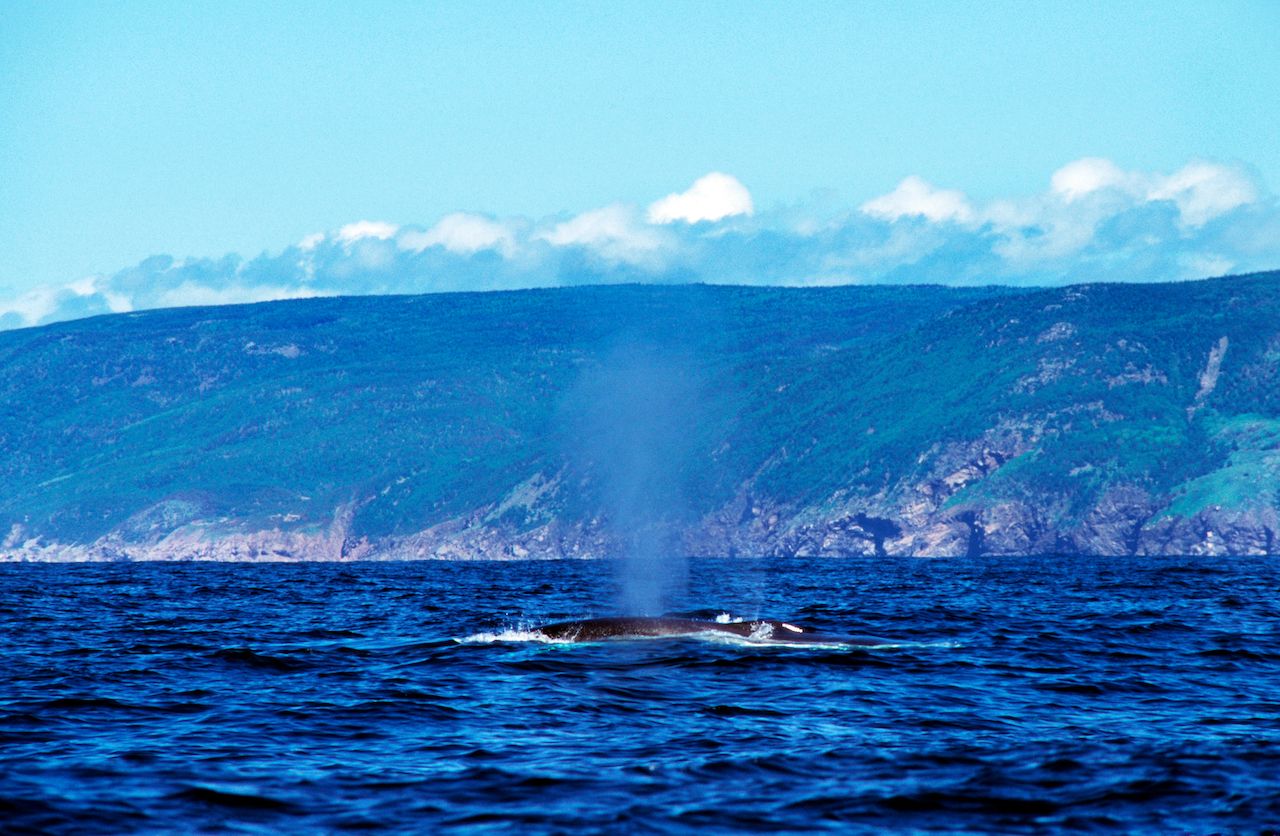 Prime whale watching, some of the best in Nova Scotia, is found in this region. Zodiacs piloted by Captain Mark’s Whale & Seal Cruise often deliver close encounters with these behemoths, and come equipped with a hydrophone to hear whales sing — conditions permitting. Spectacular coastal views of Cape Breton Highlands National Park are an added bonus.

Summer into fall is peak whale-watching season with most cruises sighting a whale, although it’s not guaranteed. In July, pilot whales migrate through Nova Scotia’s waters in large numbers, staying until October. Late August through September, humpbacks and dolphins come close to the shoreline following the fish. Be forewarned, though: Due to Transport Canada’s strict wind regulations, in some instances cruises may be canceled up to the time of departure. 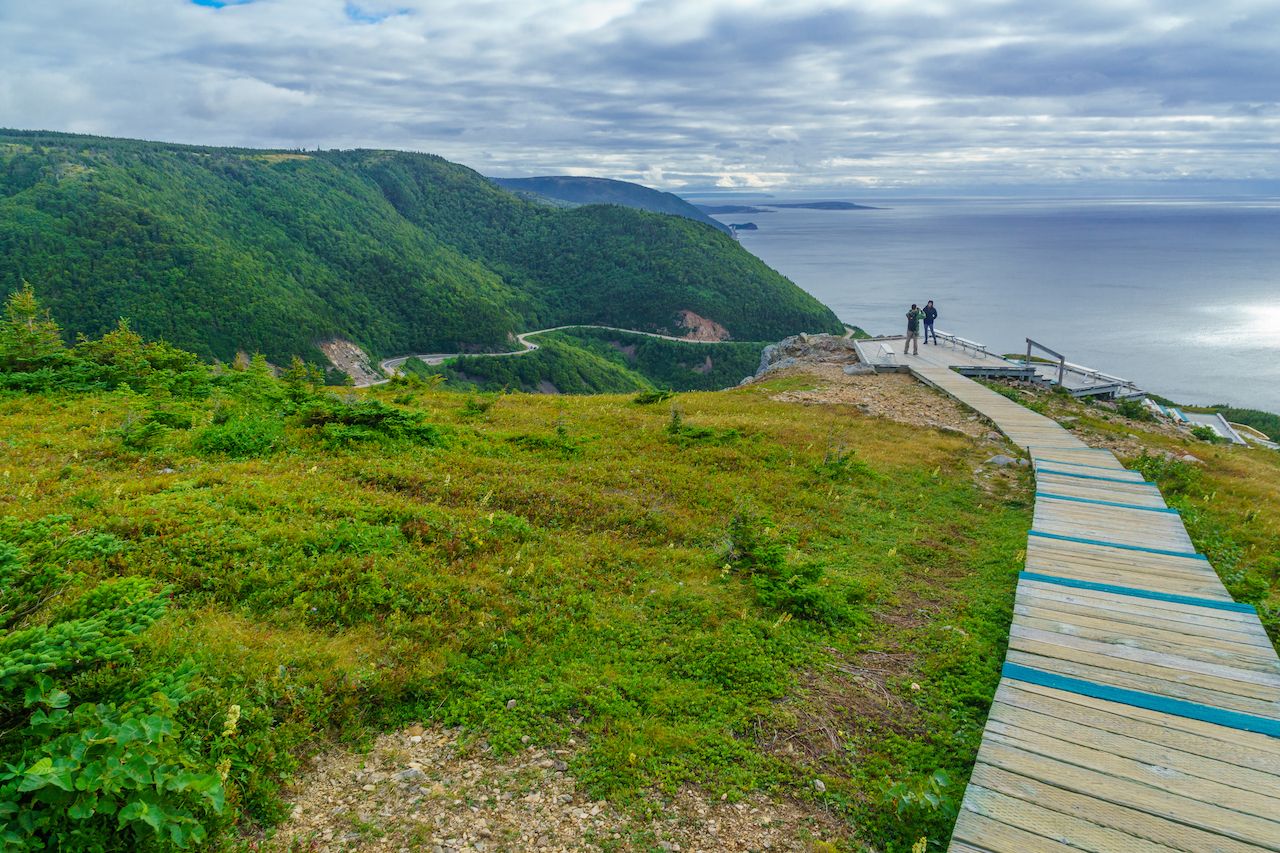 Driving clockwise and just north of Chéticamp, you’ll enter Cape Breton Highlands National Park. About 20 minutes later, the road turns inland and you’ll reach the turnoff for one of Cape Breton’s most-photographed spots, the Skyline Trail. The easy, four-mile loop ends at wide, wooden steps leading down to a series of platforms and an overlook perched far above the highway.

Take in the bird’s-eye panorama and the Cabot Trail’s ribbon of road as it hugs the Gulf of St. Lawrence. It’s worth lingering here, so allow some extra time. Besides the Skyline Trail, the park touts 25 hiking trails, from easy to difficult, that showcase spectacular views, waterfalls, salmon pools, and Boreal forests. And, if you’re lucky, you might spot a moose. 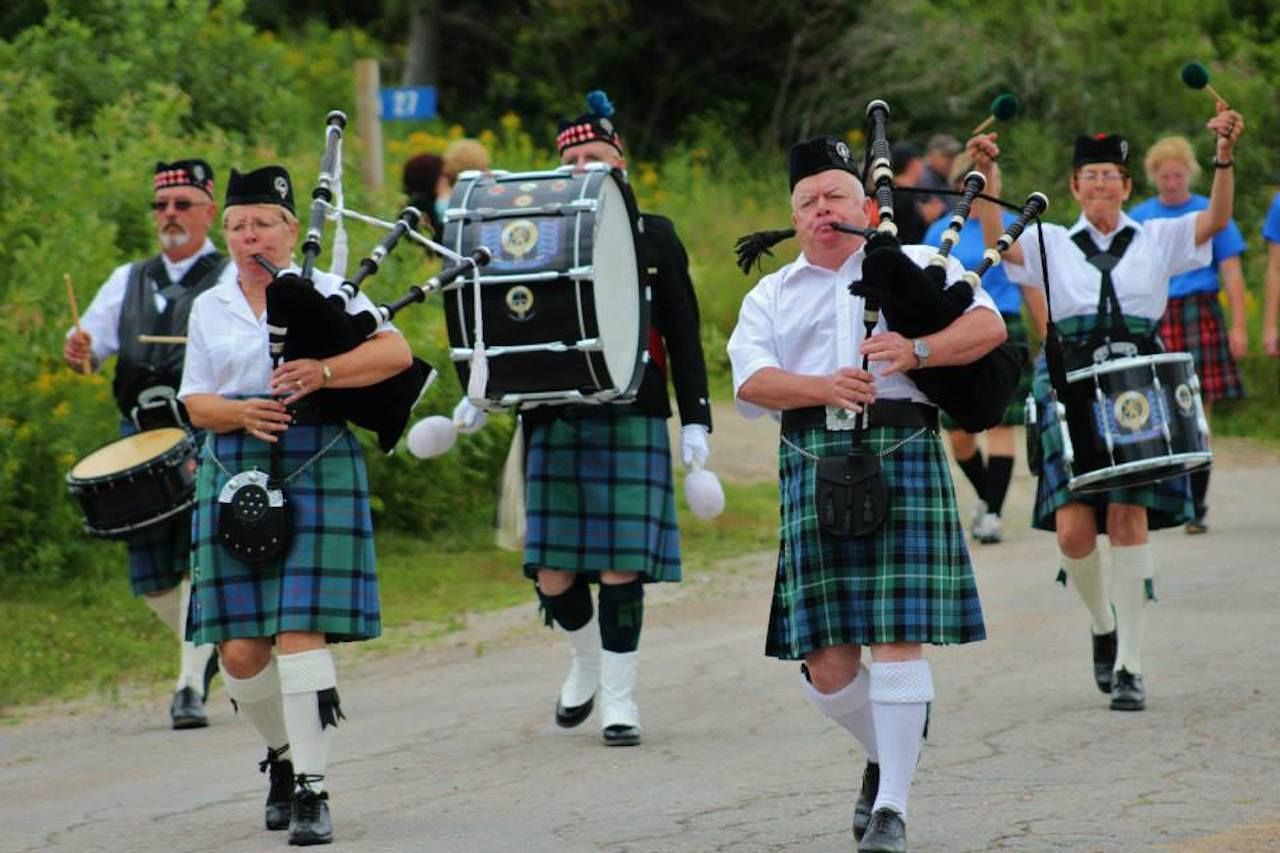 Celtic music in North American was born in Cape Breton, and the ceilidh — pronounced “kay-lee” and meaning “party” in Scottish Gaelic — lives on with Scottish traditions and music. Festivals include summer’s eight-day Kitchenfest! featuring the island’s top Celtic talent, with over 150 musicians performing in pubs, ceilidhs, and restaurants; the Margaree Highland Games; and autumn’s Celtic Colours International Festival.

In this corner of the world, history and culture intertwine at the recreated Highland Village above Bras d’Or Lake. The Alexander Graham Bell National Historic Site celebrates where the renowned inventor built his estate and called it Beinn Bhreagh, meaning “beautiful mountain” in Gaelic, as the area reminded Bell of his native Scotland. The site displays a fascinating and surprising mix of Bell’s inventions. 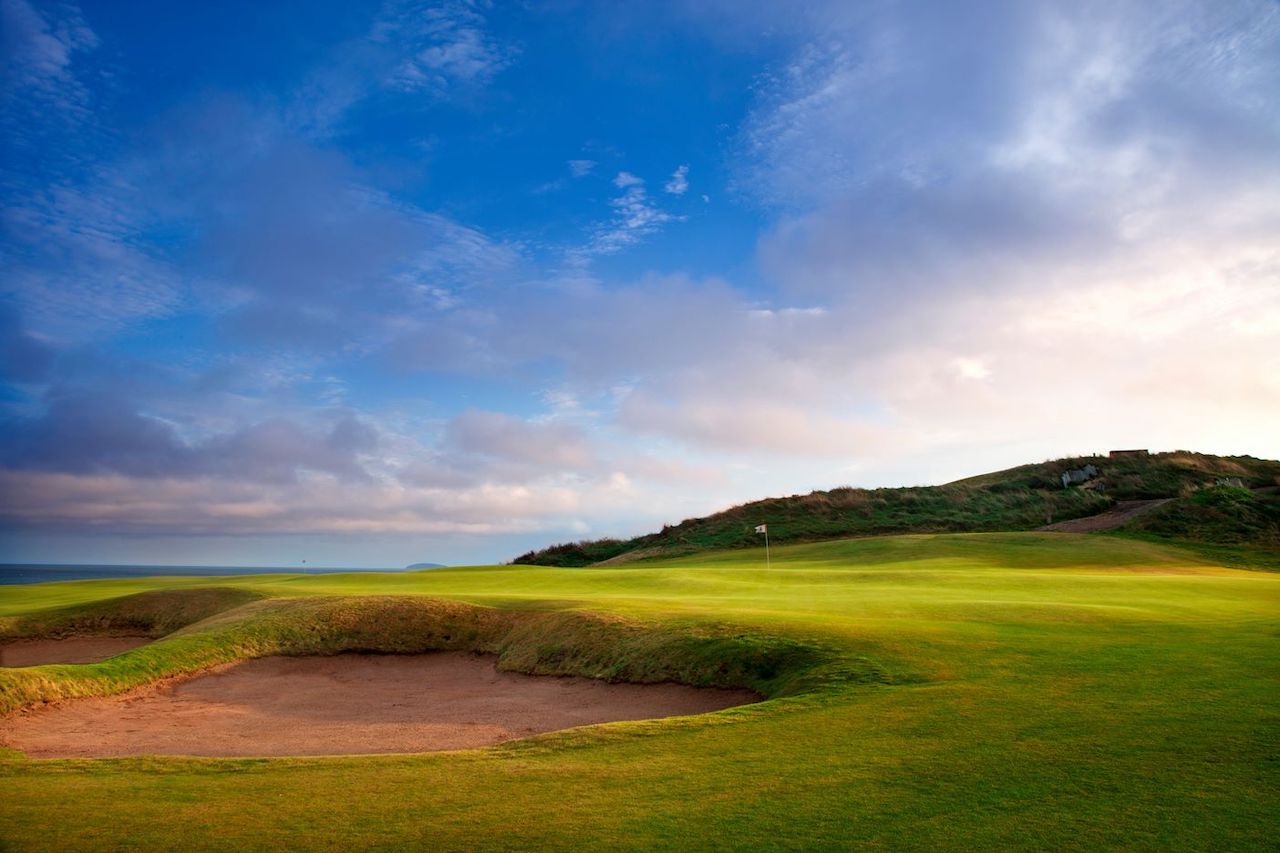 Hugging the cliffs in the tiny town of Inverness, the Resort at Cabot Links claims two world-class golf courses. Even if you’re not into golf, The Links course touts hole number 16 on its own peninsula, one of the world’s most-photographed par-three holes. Sea kayaking is available, as are hourly SUP rentals out of Margaree Harbor just 30 minutes away.

On the Murray River, River Nest Wilderness Cabins (think teeny houses without a kitchen and flush toilets out back) offer fine art craftsmanship and river views. The owner operates North River Kayak, and paddling on St. Ann’s Bay to a waterfall and small beach makes for a satisfying afternoon.

Further east along on the cape, at Ingonish Beach, the Keltic Lodge at the Highlands commands its own peninsula with cliff-top views, a par-72 golf course, and the forested Middle Head trail head, which leads to a rock-strewn headland overlooking the ocean, the perfect spot for a picnic lunch. End the day at the lodge’s exceptional Arduaine Restaurant while the sun sets over North Bay.

6. Admire the work of local artisans. 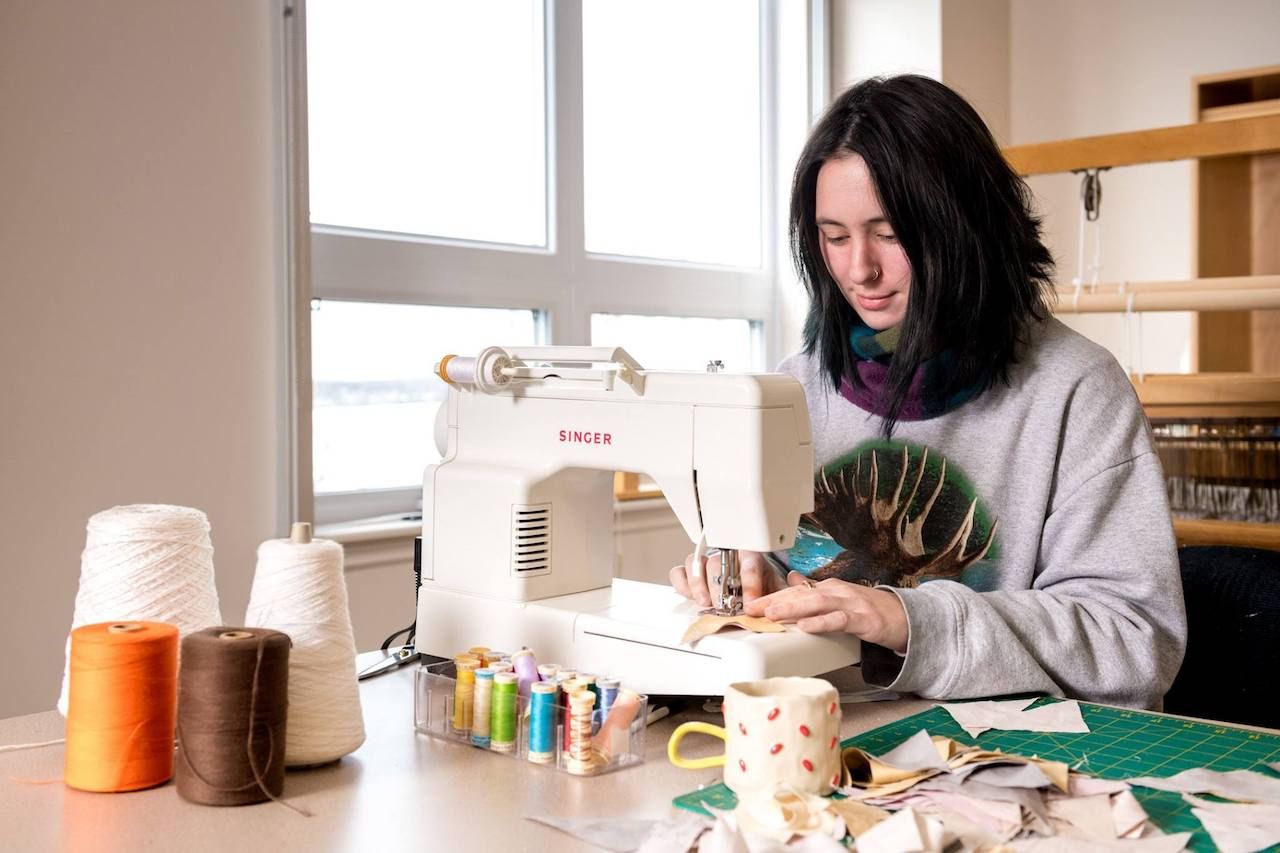 For centuries, artists have found inspiration and solitude on Cape Breton. The Artisan Trail offers a glimpse into their working studios and galleries. Near Indian Brook, Piper Pewter’s gallery displays beautifully hand-cast and lead-free pewter jewelry created in the attached workshop — in both Celtic and contemporary designs.

Just down the road, a cabin above the highway houses Leather Works by Jolene. You’ll find a rainbow of sumptuously dyed leather totes and purses, as well as dog collars, men’s belts, and wallets. All are hand sewn. Watch the purses being cut and crafted in the workshop just behind the displays. At The Gaelic College, weavers and kilt-makers create custom kilts, ties, ponchos, and other apparel, all crafted from colorful plaids made on site.

7. Feast on lobster, and wash it down with a crisp local white . 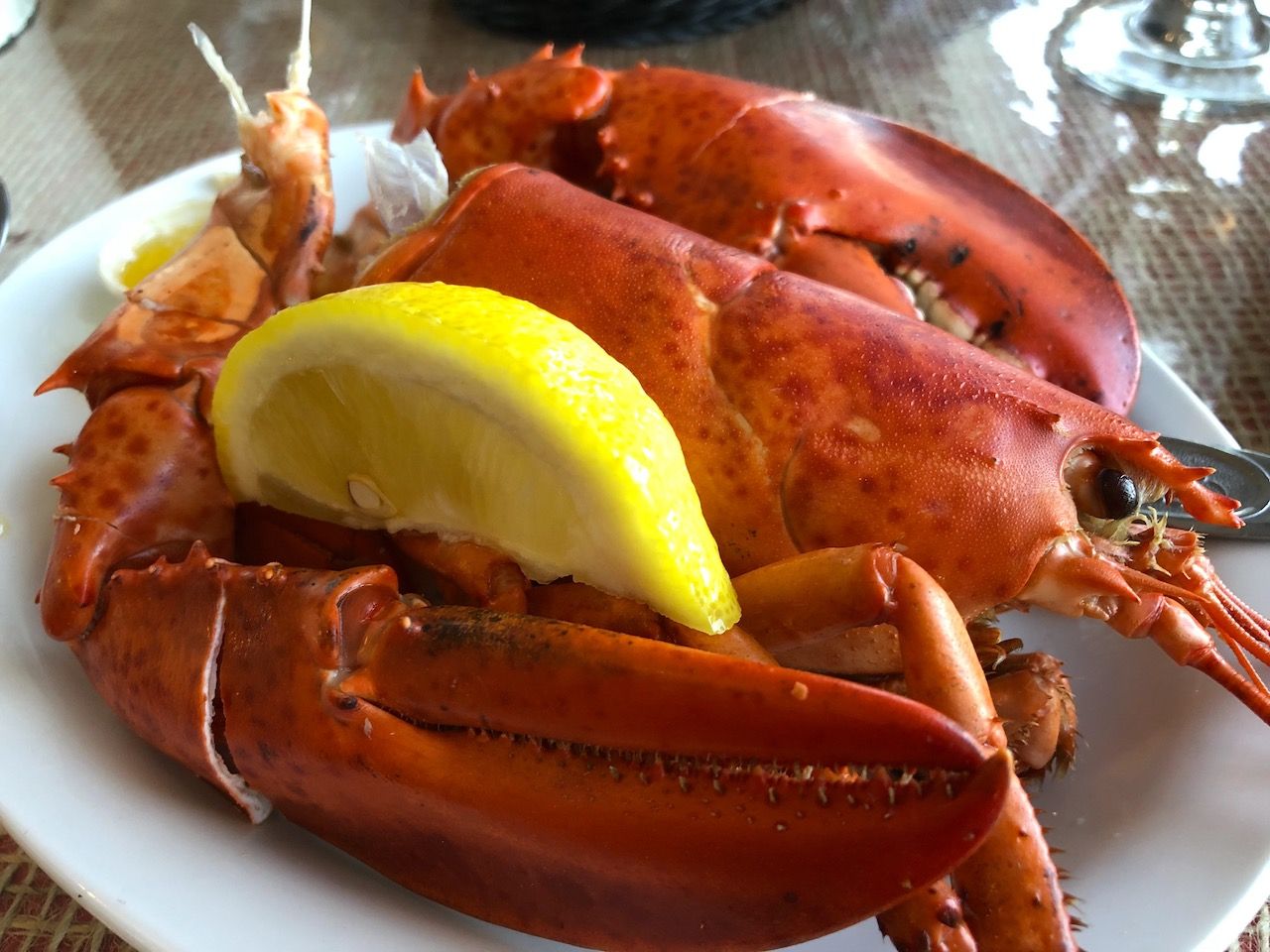 No visit to Cape Breton is complete without cracking open a fresh lobster. Between the late 1800s and into the early 1900s, Nova Scotians considered lobster “junk food.” During lobster season, farmers would gather the crustaceans and plow them into their fields for fertilizer. Inmates were fed lobsters in what was considered cruel and unusual punishment of the day.

Today, lobsters pulled from the ocean are served hours later at classy restaurants and ma-and-pa establishments. For the ultimate feast, pair it with the province’s signature Tidal Bay wine, the first appellation given to the Cape Breton’s regional wines. Each winery creates its own version of this crisp white, influenced by the coastal climate, using different blends of 100 percent Nova Scotia-grown grapes.

Travel11 Adventures for the Ultimate Road Trip on Prince Edward Island
Tagged
Beaches and Islands Trip Planning Nova Scotia, Canada
What did you think of this story?
Meh
Good
Awesome