Italians refer to car-free bicycling routes as “proper” cycle paths, and Italy is further developing its already widespread cycling network to include proper rides from the top of the boot to the heel. Beyond the many already bike-friendly cities, there are now connections to even longer routes outside of urban areas. These cycling routes vary vastly in length, difficulty, landscape, and points of interest.

Below, we’ve outlined five routes that combine many aspects of the Italian peninsula — including cuisine, history, nature, and a bit of adrenaline — with the bonus of being car-free beyond city centers. Bicycle renting locations are available both in the cities and along the cycling routes, where they also provide equipment, information, assistance, and guided tours. 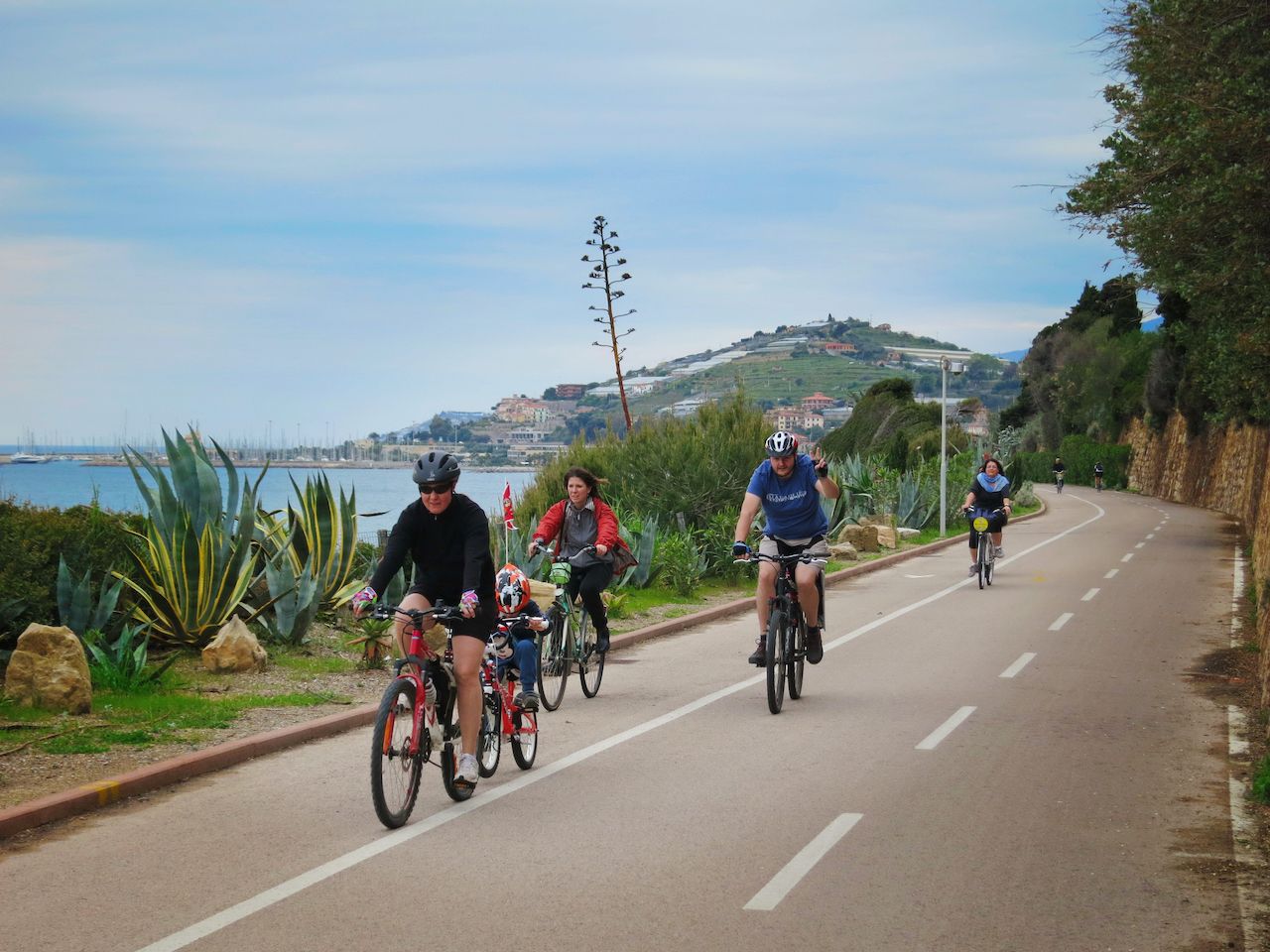 The Riviera dei Fiori, or “Coastline of Flowers,” as Italian poet and Nobel Prize winner Eugenio Montale called it, runs the western part of the Liguria coast by the border with France. The centuries-old flower industry, especially known for its carnation varieties, is the primary point of interest here. When you arrive, stop by one of the many bike shops to pick up a road bike, map, and any necessary gear you don’t have with you.

This short route runs along a decommissioned rail line and is great for families as it’s mostly on cycle paths with no cars. The ride fits into one day from start to finish, and it’s well equipped. Starting in San Lorenzo del Mare and heading west, to avoid the sun in your eyes, follow the flowers along the line. Flowers have become a staple here, and in recent decades, small terraces supported by stone walls show lines of roses, chrysanthemums, and buttercups bloom in different colors. The path is entirely along the shoreline and, although you’re never fully immersed in nature, views of the coastline are constant.

Many visitors make this ride into an eno-gastronomy tour focused on wine and food as much as the cycling itself. Small, family-owned restaurants are easy to find, and simple yet delicious fish plates follow the seasonal catches. Pair them with Vermentino, the local white wine, which is DOC or DOCG, the highest quality standard certifications. Take plenty of stops along the path and, weather permitting, go for a swim. There are many spots where to lock your bike and jump in the water. 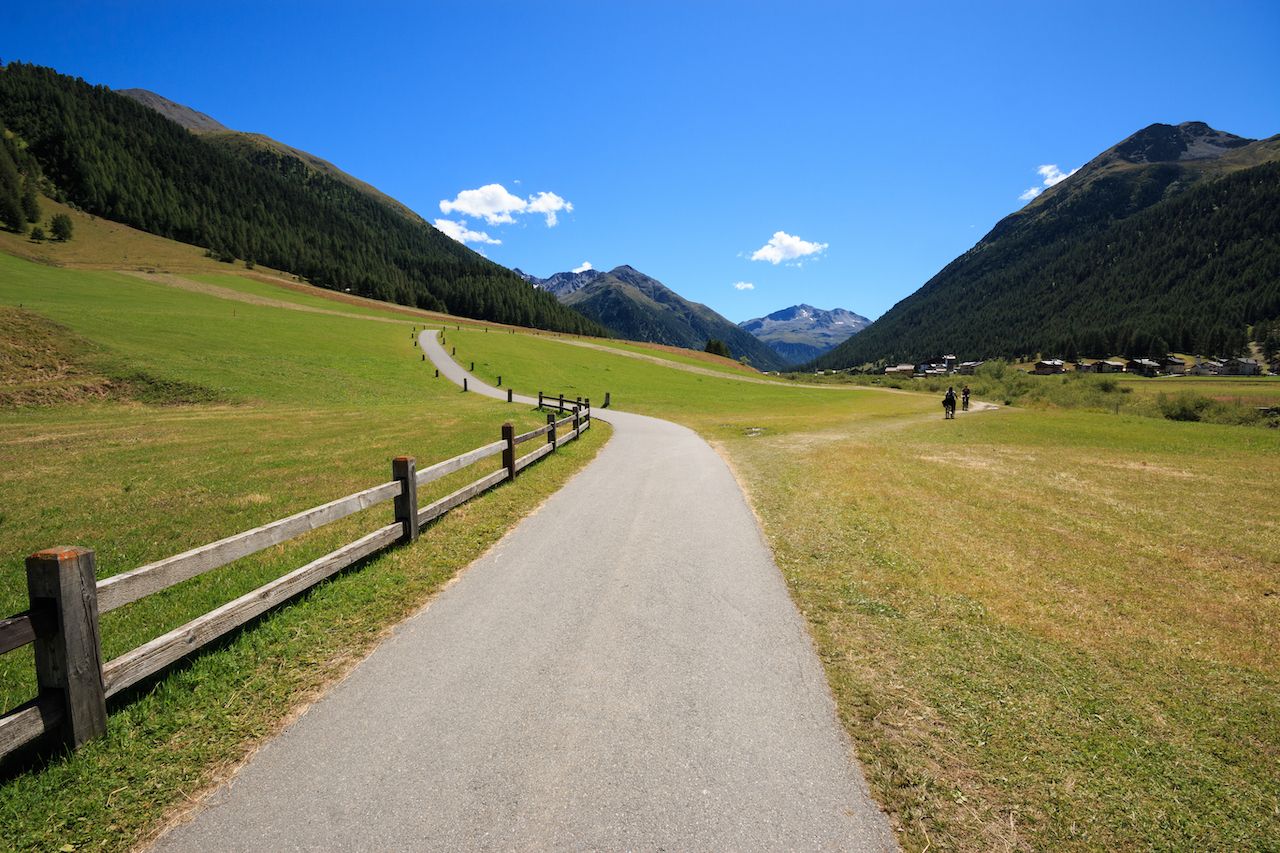 This part of the Adda Cyclepath system in north Lombardy gently slopes down from the mountain town of Bormio, on the outskirts of the Stelvio National Park, to Colico. The route is so well organized and maintained that a website built for cyclists notes any current maintenance projects or delays and offers both a map and bike-rental information. The course follows the river Adda, its source deep in the Rhaetian Alps, near the Swiss border. It’s a well laid out system with 40 equipped stop areas, seven bike-rental spots, and 46 access points from start to finish, allowing for easy places to stop and snap a few photos of the surrounding peaks.

Following the river Adda takes you lower into the green valleys. The path mostly avoids thick forests, but you’ll cross patches of trees when the view of the mountains is shielded for a spell before opening up wide later on, the grandiose Alps surrounding you once again. This keeps the ride interesting as the views are ever changing. It’s also fairly uncommon to meet crowds, and cruising the whole length of the path actually gives you that feeling of silence that’s often hard to come by on a trip to Italy.

The path is dotted with spots catering to art, history, and wine, typically visited through the access points. Adrenaline seekers can hike, climb, or swim at many points along the way. At mile 1.5, Fort Montecchio-Lusardi is the last original WWI Italian fort and part of a complex defensive system. At mile 11.8, walk around the town of Morbegno and visit the completely frescoed walls and ceilings of Malacrida Palace. At mile 12.1, after an elevation gain of 2,297 feet, you’ll reach the Bridge in the Sky (Ponte nel Cielo), the tallest Tibetan-style bridge in Europe at 459 feet. Wine producers are found at mile 34.7, next to artisans creating the traditional pezzotti, colorful and long-lasting carpets. 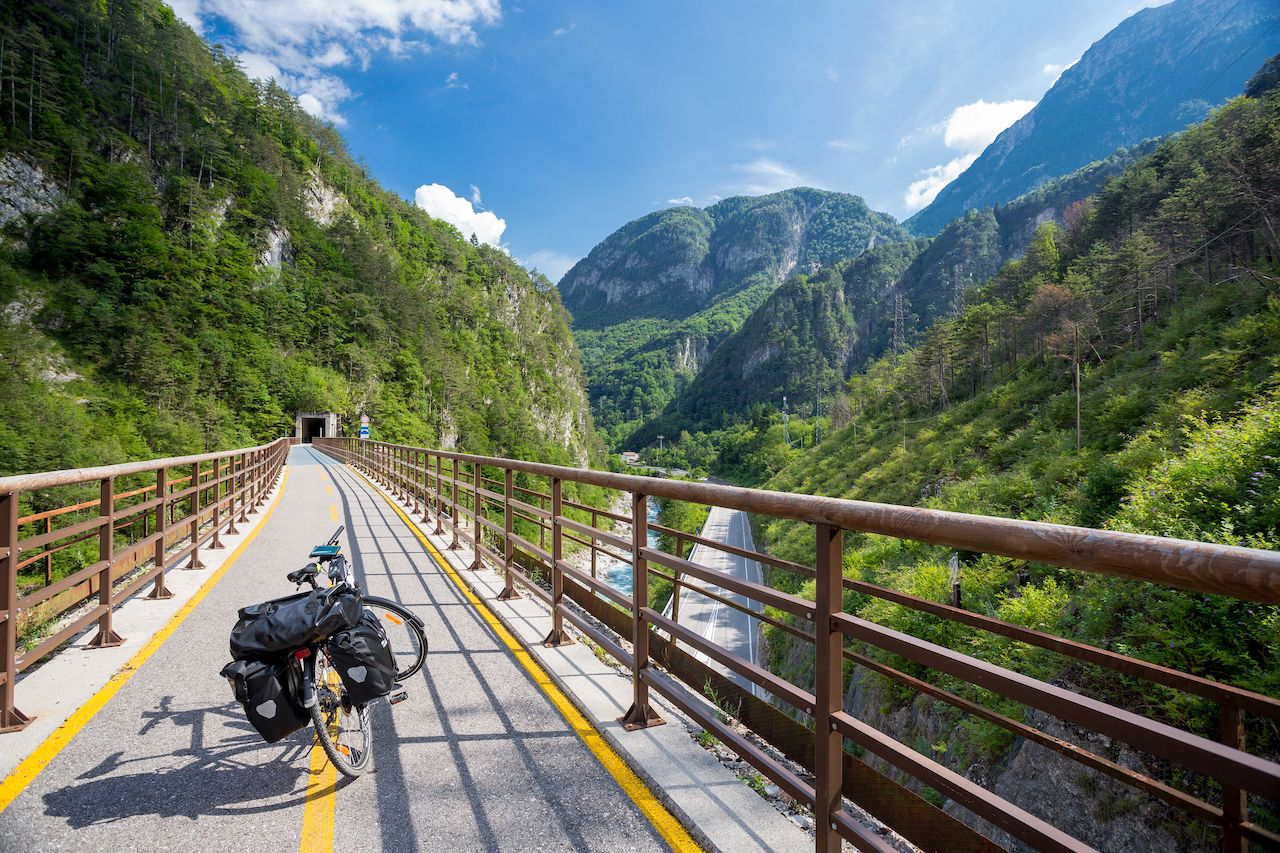 This route is the Italian section of one that starts in Salzburg, Austria. It will take you from the foothills of the Carnic Alps through undulating countryside to the Adriatic Riviera. Venzone, a pretty medieval village, is your starting point. It’s basically straight south and all downhill from here to the seaside city of Grado, your destination after a long day of riding. Although the route is fairly recent for cyclists, it has Roman origins as a commercial link to Austria. Nevertheless, it’s little traveled and fit for some solo time and easy cruising.

Before leaving the Gemona province, make sure to try the famed prosciutto crudo, especially the unique Prosciutto di Sauris, produced nearby and recognizable for the soft, smoky hint of flavor coming from local beech trees. The route takes you through Udine, the main city of the Friuli region, which is rich in history and art. Here, the Bishop Palace is in excellent condition, showcasing bright, monumental staircases with frescoed ceilings.

Friuli is a world-famous wine region. When I lived in Trieste, the bianchi friulani, or white wines from Friuli, were are a popular drink choice. Try the Picolit, a DOCG, or Ramadolo, also a DOCG, both produced around Udine. But pinot gris, chardonnay, sauvignon, and many others are available for wine connoisseurs — or anybody who seeks good Italian wine.

Grado is a small city but a popular family-friendly destination in summer, although the extended urban development stretches for miles beyond the city center. Bicycles are seen everywhere here, and the other common sight are the pineta, long and thick maritime pine trees in the planted forests. They offer some respite from the sunshine and wind-blown sand. 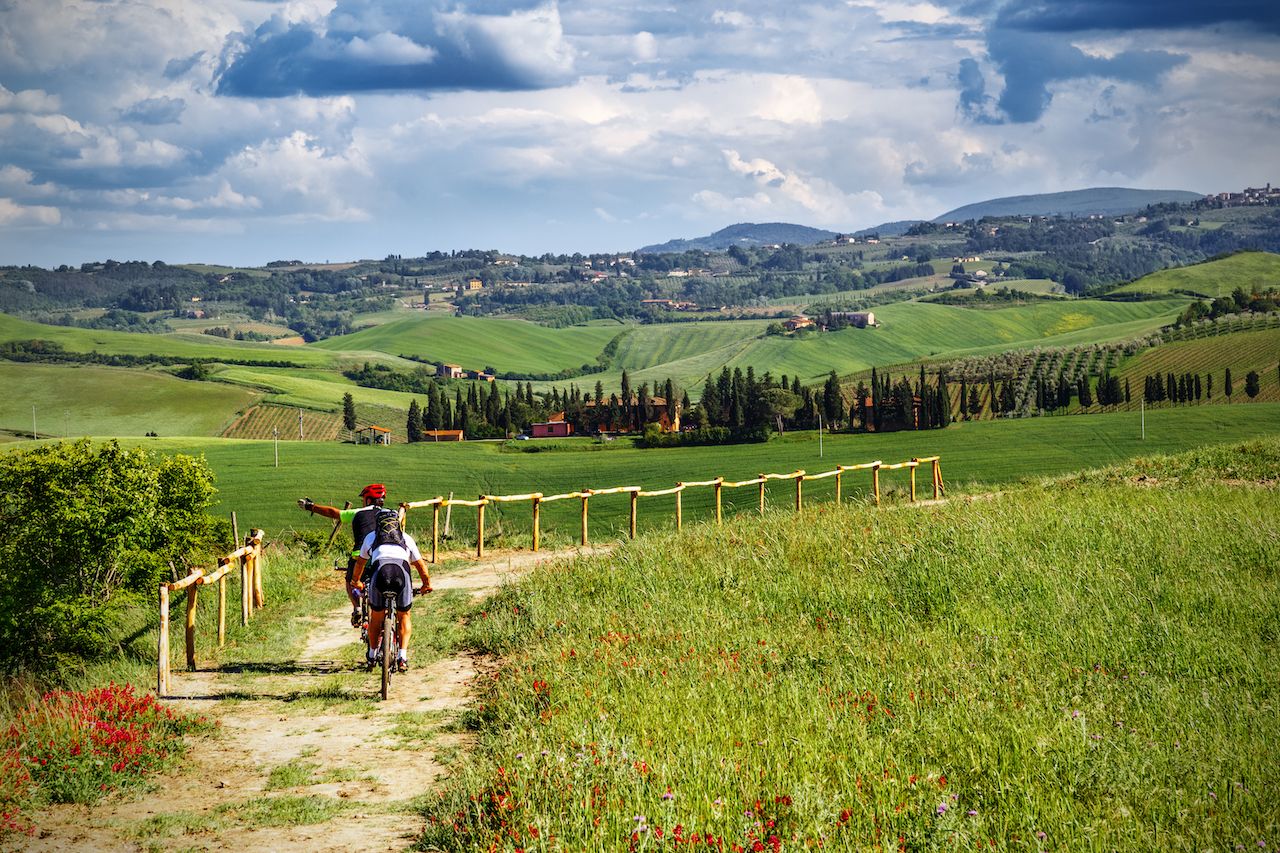 Umbria is a landlocked region still largely under the radar, sitting between the more famous Tuscany, Lazio, and Marche areas. It’s rich in art and history, and the landscape is just as pretty as the neighboring regions, without being overcrowded or pricey.

Spoleto, your starting point, offers plenty to see and do before hopping on the bike. The Ponte Sanguinoso, meaning “bloody bridge” in reference to first-century Christian persecutions undertaken in a nearby amphitheater, is near the Roman Theater, which also dates to the first century AD. The grandiose Rocca Albornoziana, built in 1370) and recognizable for its six towers, was built for a Spanish cardinal. The UNESCO World Heritage Basilica San Salvatore is one of early Christianity’s most important pieces of architecture.

For the ride itself, plan carefully as there are no street signs whatsoever along the route and little paving. The ride takes you through open wilderness, though the path is rather smooth. Between this city and Norcia, your destination, the cyclepath is converted from a decommissioned railroad track. This creates quite the route as it travels with big elevation changes across 19 galleries and 24 bridges or viaducts. The viaducts offer unique top views of the valleys, often steep and with thick underbrush. The point of view is reversed when you travel across the valleys’ bottoms.

Tall and rough cliffs on one side, a stream on the other, and tall shrubs everywhere are a common sight, but thick stretches of wooded area appear briefly at multiple points. The longest of these is just 1.24 miles though are no lights, so this portion tends to be quite the trip for the senses until you finally catch sight of the exit. Although the cyclepath runs alongside the freeway in several spots, it offers many peaceful moments, and it’s difficult to see people. Francis of Assisi traveled the same region. Along the route you’ll glimpse many monasteries, villages, and churches hidden in the woods, decorating hilltops, or leaning against hillsides.

Take in the city’s history at the sixth-century Santa Scolastica Church and the 1569 Castellina fort by famed architect Vignola, which became city offices in 1860. Norcia is also world-famous for its norcinerie, butchers selling anything pork, as well as truffles, pecorino cheese, or legumes, all strictly local. Wild boar products are very refined here, far from the game-y, tough, chewy meat that may come to mind. Nothing better than to finish a satisfying yet intense bike ride than to slip into one of the many locandas, or inns, and enjoy a home-made dish from local meats paired with a red wine, likely either Sagrantino or Torgiano. 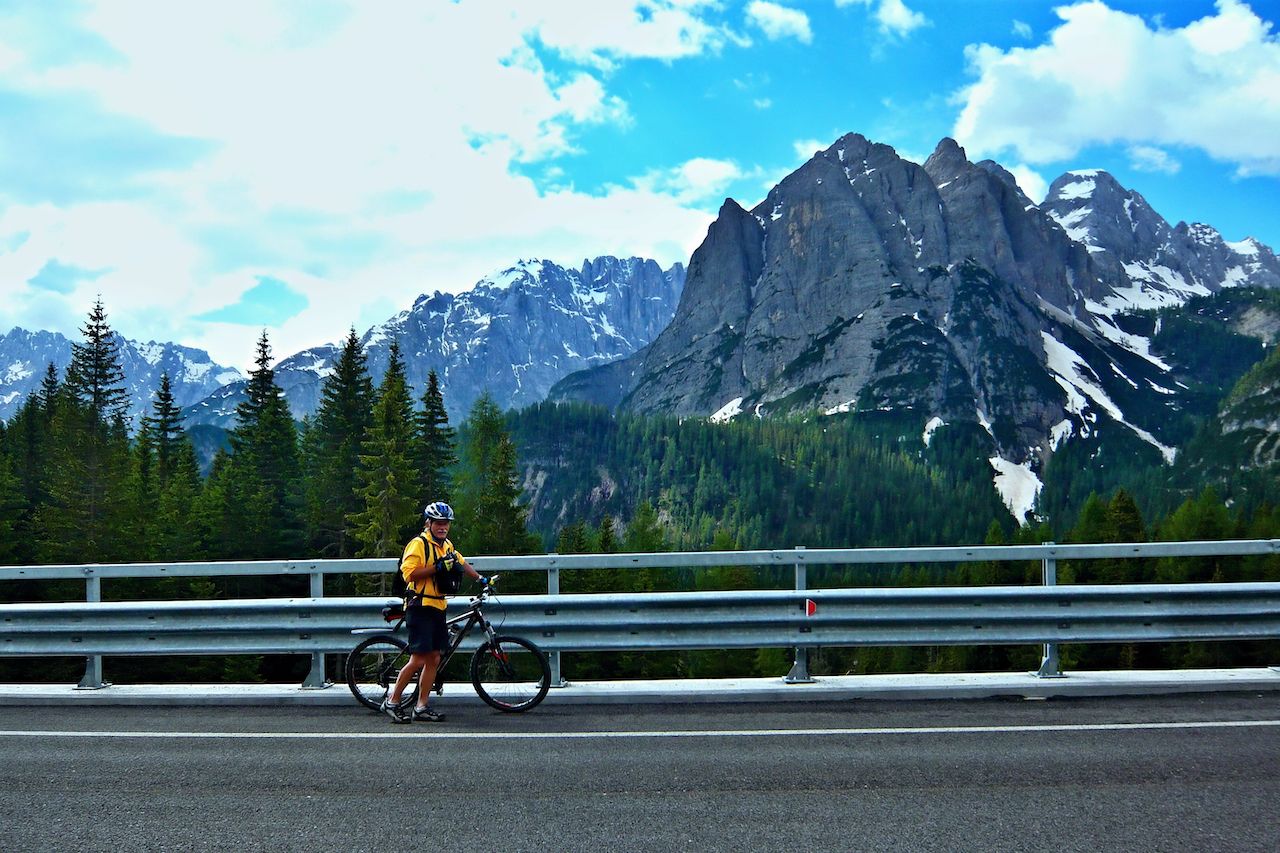 This adventure will literally take you across the whole length of Italy. It’s the Italian segment of EuroVelo 7, one of the longest EuroVelo cycling routes crisscrossing Europe. It starts in the north from San Candido on the eastern edge of the Dolomites and travels straight south until Grosseto in Tuscany. It follows the Tyrrhenian Coast until Reggio Calabria in Calabria, then hops into Sicily and finishes in Palermo. We recommend careful planning, proper equipment, and road-cycling training, as only four percent of the route is on cycle paths, and 26 percent is on greenways (that is, unpaved roads or country lanes). The rest is on road.

The ideal time to do this ride is in late spring. The Alps can have late-season snowfall or heavy rainfall, which are very dangerous in the steep downhills of the mountains, which you’ll cycle until you arrive in Verona after 138 miles. This unique trip calls for good planning but also for flexibility — you want to be consistent in progress but free from having to rush to the next stop when there is a beautiful spot in front of you.