When thinking about cannabis tourism, outdoorsy Western states like California or Colorado are often the first places that come to mind. But since Illinois decided to legalize recreational marijuana in 2020, the Midwest has been slowly gaining more to offer cannabis tourists and breaking stigma along the way, especially in the Windy City. Dispensaries and grow facilities have popped up in addition to interactive experiences that celebrate what makes Chicago great — with cannabis, of course.

Despite more prominent cannabis industries in other legal states, this booming metropolis with a rich culture and history is set to become the country’s next cannabis giant. Sparkling Lake Michigan matches California’s beaches, and city treks answer Colorado’s hikes. Here are some must-see cannabis experiences to book in Chicago.

Herbal Notes is Chicago’s premier THC-infused food experience headed by Manny Mendoza, winner of Cooked With Cannabis on Netflix. Mendoza makes Michelin-star quality meals infused with THC and CBD for a stoney high-end experience. Each menu’s five courses are infused with 2 milligrams of cannabis oil. He emphasizes that Herbal Notes dinners are made to be manageable, even for novice smokers. Though cannabis is an essential element of the meals, Mendoza wants Herbal Notes to allow his cooking skills, honed at the Culinary Institute of America, to shine.

“I don’t heavily infuse or medicate people’s foods because that’s not what I’m trying to do,” he says. “I’m a chef. I like to cook food; I want people to taste food. We don’t want to ruin people’s experiences.”

Although he’s serving up quality meals, he also strives to educate and be a force for good. Mendoza hopes for a more equitable cannabis industry that gives back to communities. “In the Midwest [cannabis has] been taboo up until recently,” he says. “The only culture we have is the War on Drugs culture.” He dedicates his work to people of color whose areas have been ravaged and disenfranchised by the War on Drugs. “Once marginalized communities and those most affected by the war on drugs can get more licenses and have more businesses…those people and communities can start building general wealth.”

Herbal Notes is in Mendoza’s native Pilsen, a Southside neighborhood he describes as a “pretty huge melting pot.” His desire to build a cannabis business took him to San Diego, but his love of his hometown brought him back to the Midwest. To Mendoza, Chicago offers a flavor and authenticity that can’t be matched. “[We Chicagoans have] a certain attitude, and toughness, and realness, and understanding of the situation around us.”

Despite his assertion that Chicago has a long way to go in the cannabis industry, he believes in his hometown. “It’s one of the top cities for food and drink, music, and sports. We have everything else except for the outdoors.” 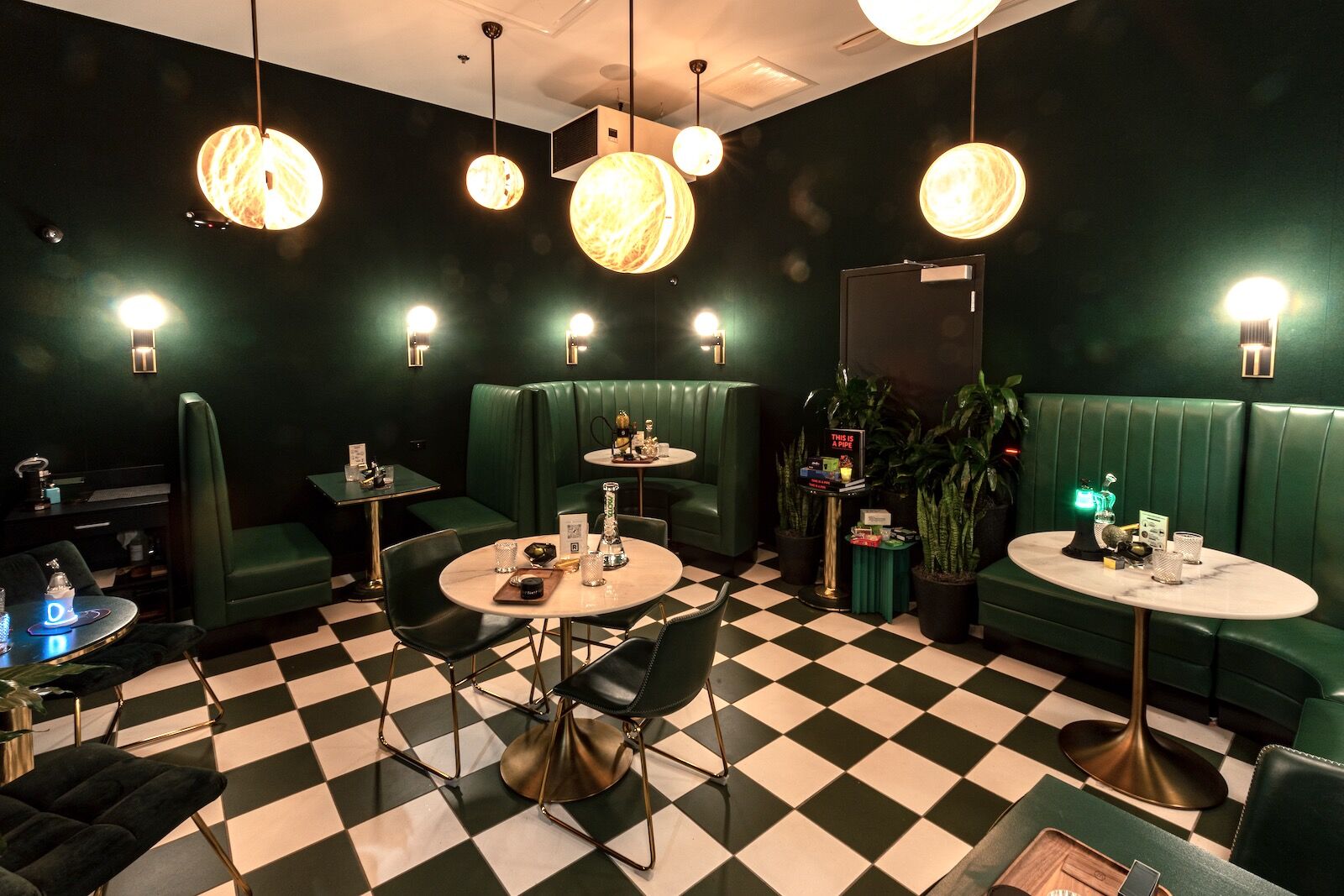 The Smoke Easy is a cannabis consumption lounge that invites both seasoned weed enthusiasts and beginners to have a fun and educational cannabis experience. Situated in the back of the Mundelein RISE Dispensary location, the Smoke Easy is a quick 45 minutes from downtown Chicago. It’s worth the trip to have access to sanitized rigs and pipes people might not normally have a chance try. Popular gear includes PuffCo vaporizers and the $600 Stundenglass gravity hookah.

Headed by Green Thumb Industries, founder and CEO Ben Kovler hopes to provide a safe and informative lounge for others to relax and connect.

The consumption space has a private VIP room available for events, along with a larger consumption space. Visitors enter the lounge through the RISE dispensary to purchase items they want to consume. Items include flower, pre-rolls, vapes, and THC-infused beverages by cannabis brands such as Rythm, Dogwalkers, and luxury weed brand Beboe. Edibles are the only products prohibited from consumption due to the onset time.

3. Take in Chicago’s history on a cannabis bus tour

Chi High Tours was founded in 2019 and has the bragging right of being the first cannabis bus tour company in Illinois. James Gordon created Chi High Tours to offer a fun cannabis tour experience and build equity and diversity in Chicago’s cannabis scene.

Chi High Tours celebrates all the things that make Chicago what it is. Tour packages range from jazz, comedy, or beer to the history of Chicago, and each is led by knowledgeable guides who offer fun how-to segments on rolling a cone, accurately judging THC tolerance, or differentiating between terpenes.

The popular jazz tour includes a visit to a dispensary and then a consumption spot where tourists can play games, use sanitized rigs, connect, and ask questions about cannabis. This is followed by live music at the world-famous Andy’s Jazz club. Dinner and drinks are available, and patrons are seated in a private section with a stunning view of River North.
Chi High’s marketing liaison Andrea Morris notes the three pillars of the tours: “Fun, education, and connection. We want people to genuinely engage with one another and network and have fun while safely consuming cannabis.” 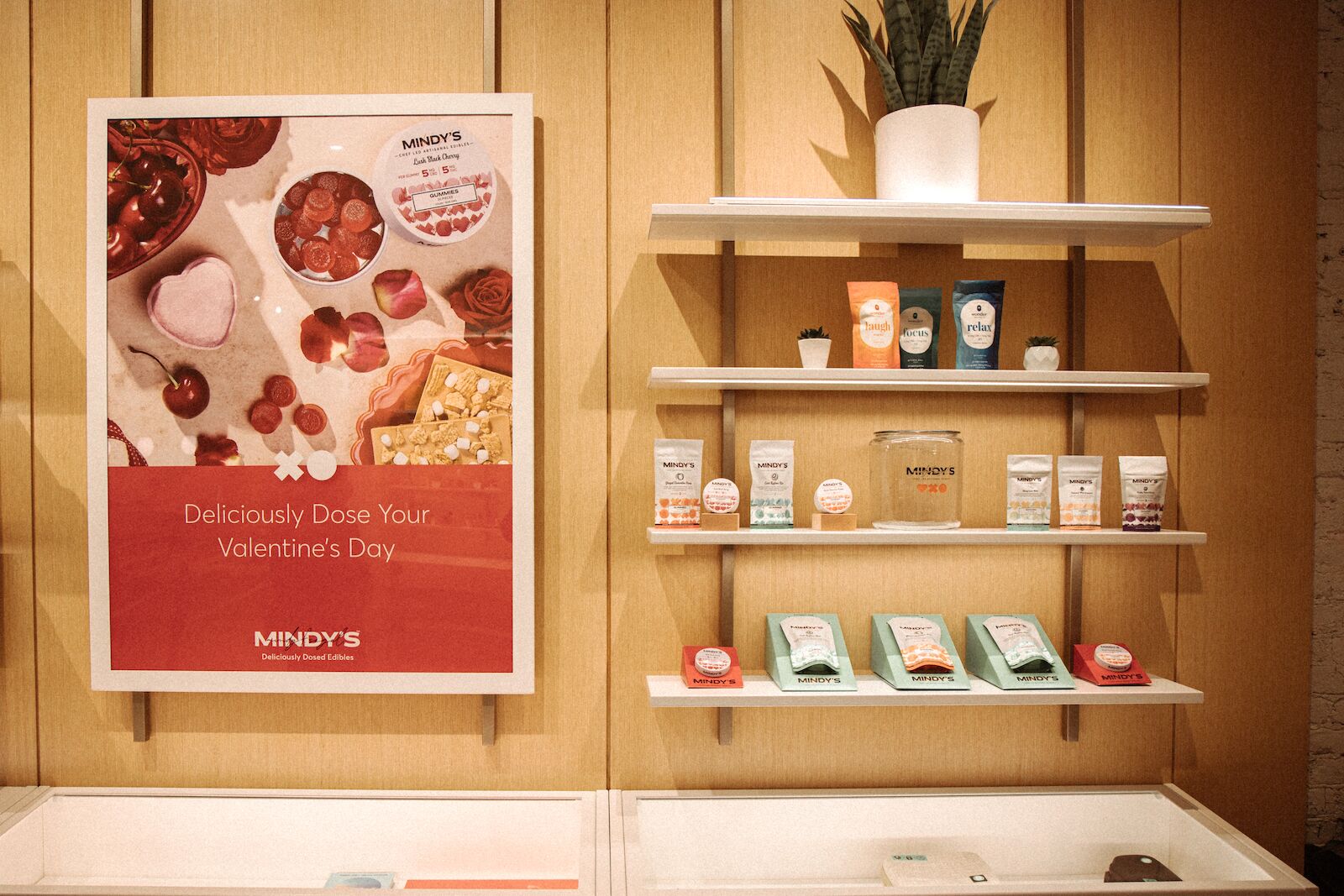 Mindy Segal is a James Beard award-winning chef who cut her chops in the Chicago culinary scene before entering the cannabis industry. She’s cooked at some of the best restaurants in the city, including the pivotal Charlie Trotter’s. Mindy’s Bakery is a Chicago institution and gives tourists a chance to experience her weed-free culinary crafts, though for people looking for something stronger there’s Mindy’s Edibles.

Segal partnered with Cresco Labs to create Mindy’s Chef-Led Artisanal Edibles in 2014 when Illinois legalized medical cannabis. Since the state legalized recreational cannabis, Segal has reached a much wider audience.

“Recreational [customers] are more excited about my micro dosed stuff,” Segal says. She notes that novices who are curious about edibles have enjoyed the lower-dosed treats (her gummies are especially popular) as a way to ease into the world of edibles. “[Medical marijuana patients] like a higher dose…they have more tolerance because they’re using it for pain.” Between crafting edibles for medical vs. recreational consumers, she notes, “There are differences. All the same, still just great that I can hit so many people.”

Segal seeks to destigmatize cannabis in the Midwest and nationwide by using her culinary genius to create unique and intense flavor profiles. Edibles are made with THC distillate so that the ingredients are the main focus; there’s no cannabis odor or aftertaste. The perfectly-dosed products come in flavors like Glazed Clementine Orange and Caramelized Chocolate Marshmallow Graham.

CannabisThe Best Cannabis Products for When You Only Have a Quick Layover
Tagged
Cannabis Chicago, IL, United States
What did you think of this story?
Meh
Good
Awesome

This Map Shows Every State Where You Can Legally Consume Cannabis