More than any one attraction, Chicago’s skyline is its most iconic feature. It’s one of the tallest and greenest cities in the world, with a beautiful lakefront perch to boot. All of that also adds up to being a city with unforgettable sunsets.

The best Chicago sunset viewpoints broadly fall into two categories: sites with height, be it observation decks or rooftop bars, and scenic landmarks that look extra striking dressed up in early evening pastels. Lucky for visitors, sunset comes every day, so you can easily see the Chicago sunset for several angles in a single trip.

Here are 10 of the best places in the city to be during that magic hour. 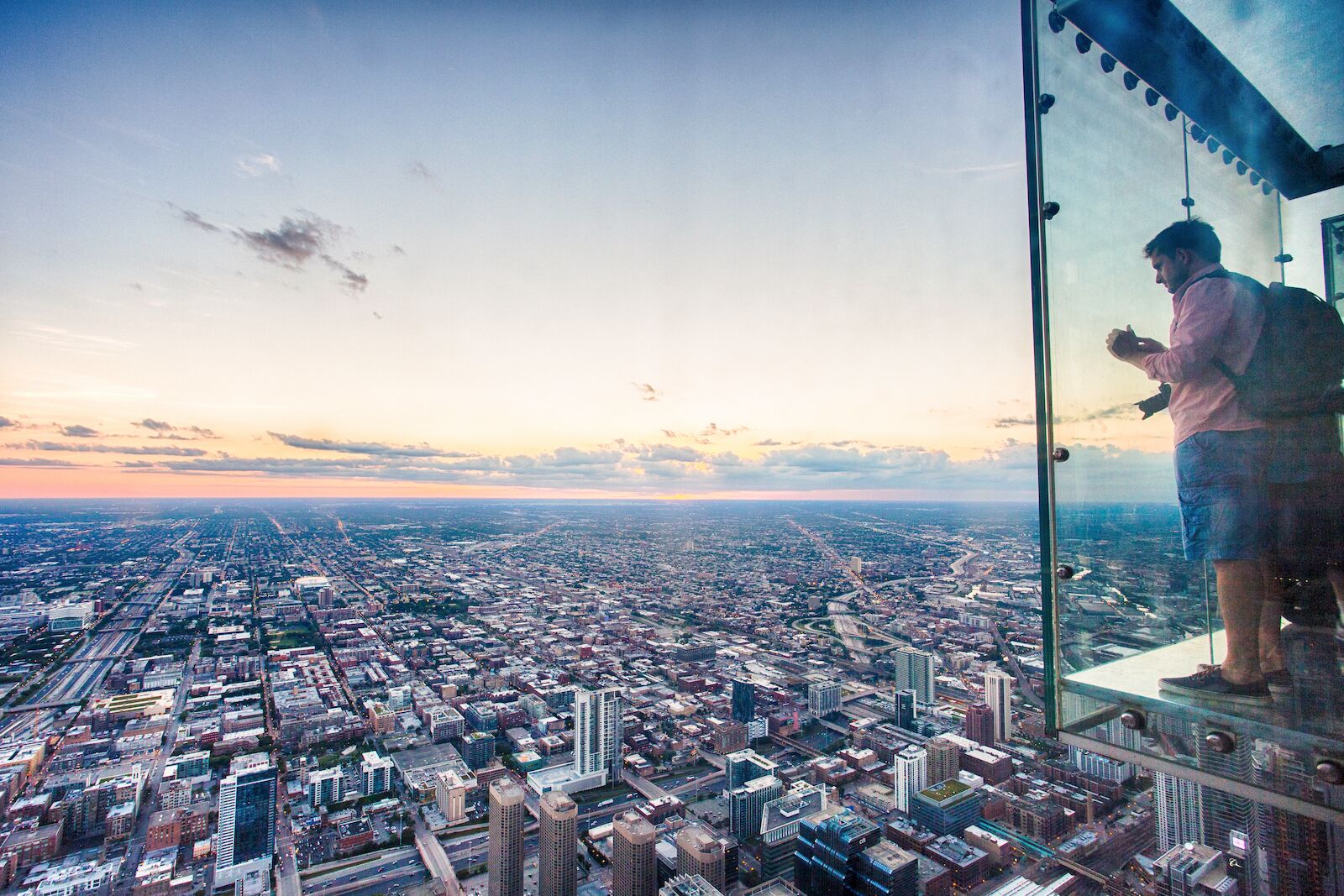 It’s only fitting that the tallest building in Chicago, the Willis Tower, also has the city’s highest observation deck. It’s called Skydeck, and it’s located 1,353 feet in the air on the 103rd floor of the Willis Tower. What’s especially cool is that it’s the tallest observation deck in the entire country. An obvious choice for watching the Chicago sunset, the best Skydeck views belong to The Ledge, a series of glass balconies that jut out more than four feet from the building. Basic admission to the Skydeck, including Ledge access, costs $30 to $40 for adults and $22 to $36 for visitors under 12. Children three and younger get in free. 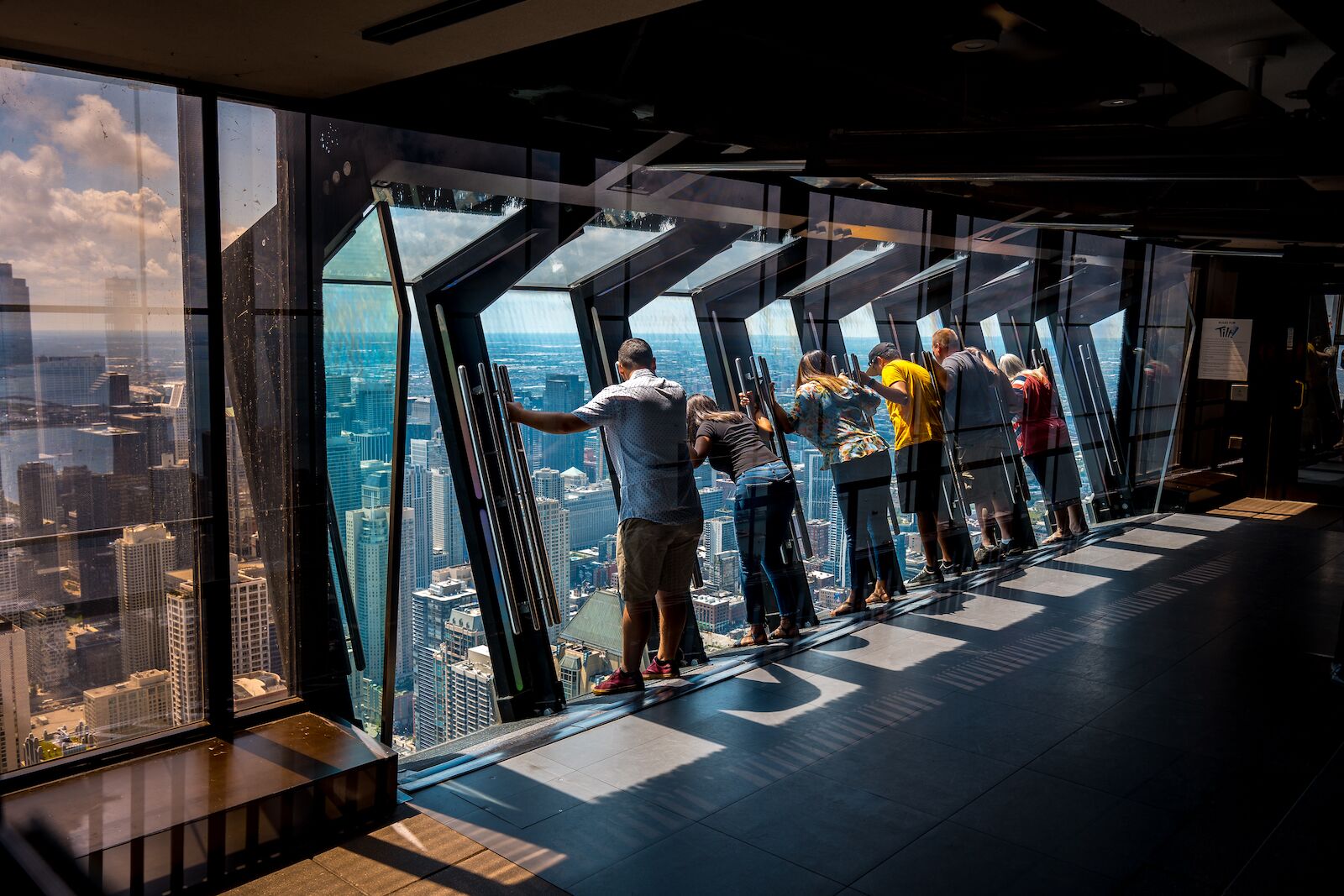 At 1,030 feet high, 360 Chicago is just shy of the Skydeck, but it’s still one of the best places in the city to see the Chicago sunset. The observation deck overlooks the Magnificent Mile — 13 bustling blocks of the city’s commercial district — from the 94th floor of the former John Hancock Center. One thing 360 Chicago has that Skydeck doesn’t is TILT, a glass wall that tilts 30 degrees downward to yield heart-pumping panoramas of the city below. Though you’ll probably want to be facing forward when the sun actually sets, which you can do drink in hand thanks to the observation deck’s bar. Entry to 360 Chicago starts at $30 with TILT & View tickets from $39 and Sip, TILT & View tickets from $49.

The Signature Room and Lounge 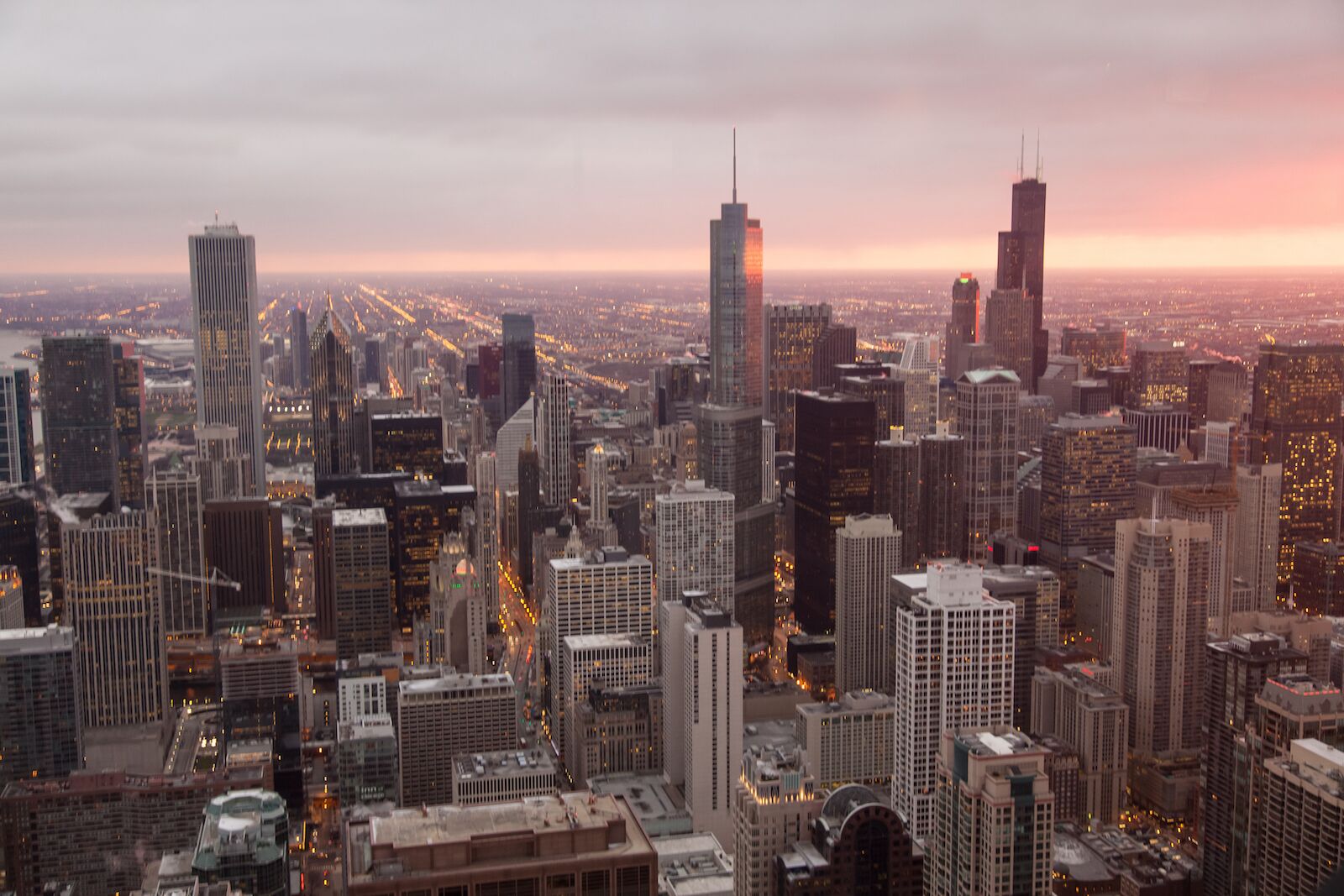 One floor above 360 Chicago, on the 95th floor of 875 North Michigan Avenue, the Signature Room restaurant rivals the observation deck below as the ultimate vantage point for watching the Chicago sunset. The view is as much a part of the experience as the meal, which centers on fresh seafood and premium steaks. But if you’re just in it for the show you can climb ever higher. The Signature Lounge sits on the 96th floor of the former John Hancock Center and has a huge menu of classic and specialty cocktails to help you take in the Chicago sunset in style. 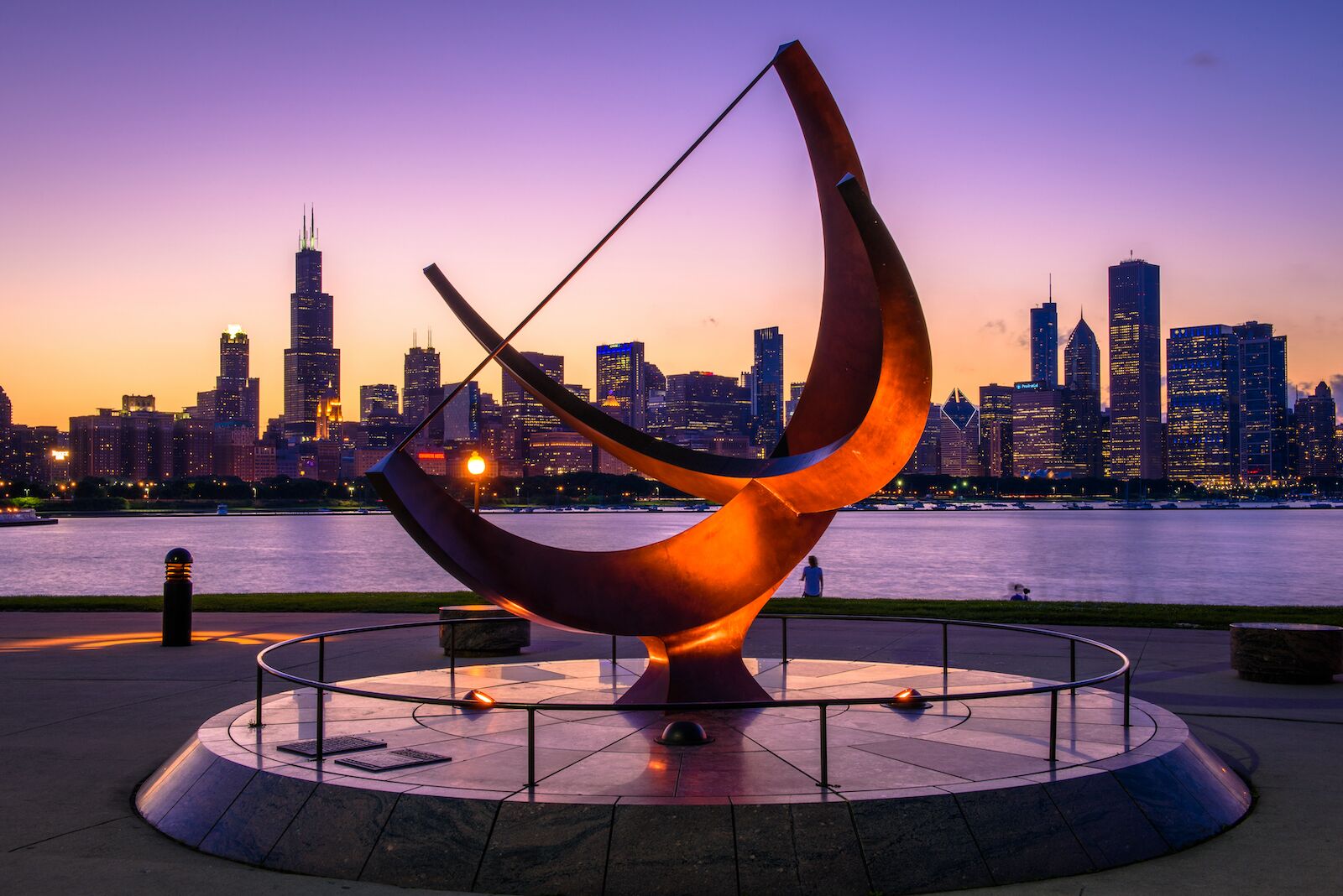 Back in 1930, the Adler Planetarium became the very first planetarium built on American soil. It’s part of Chicago’s Museum Campus, which also hosts the Shedd Aquarium, Field Museum of Natural History, Soldier Field Stadium, and McCormick Place convention center. The 57-acre stretch also happens to perch on Lake Michigan in Grant Park, offering visitors unobstructed views of both the waterfront and a number of city landmarks. It’s worth making a whole excursion out of the planetarium, but even after it closes, the exterior is a popular haunt for photographers. Set up your camera behind the massive sundial outside the planetarium to capture a classic Chicago sunset snapshot. 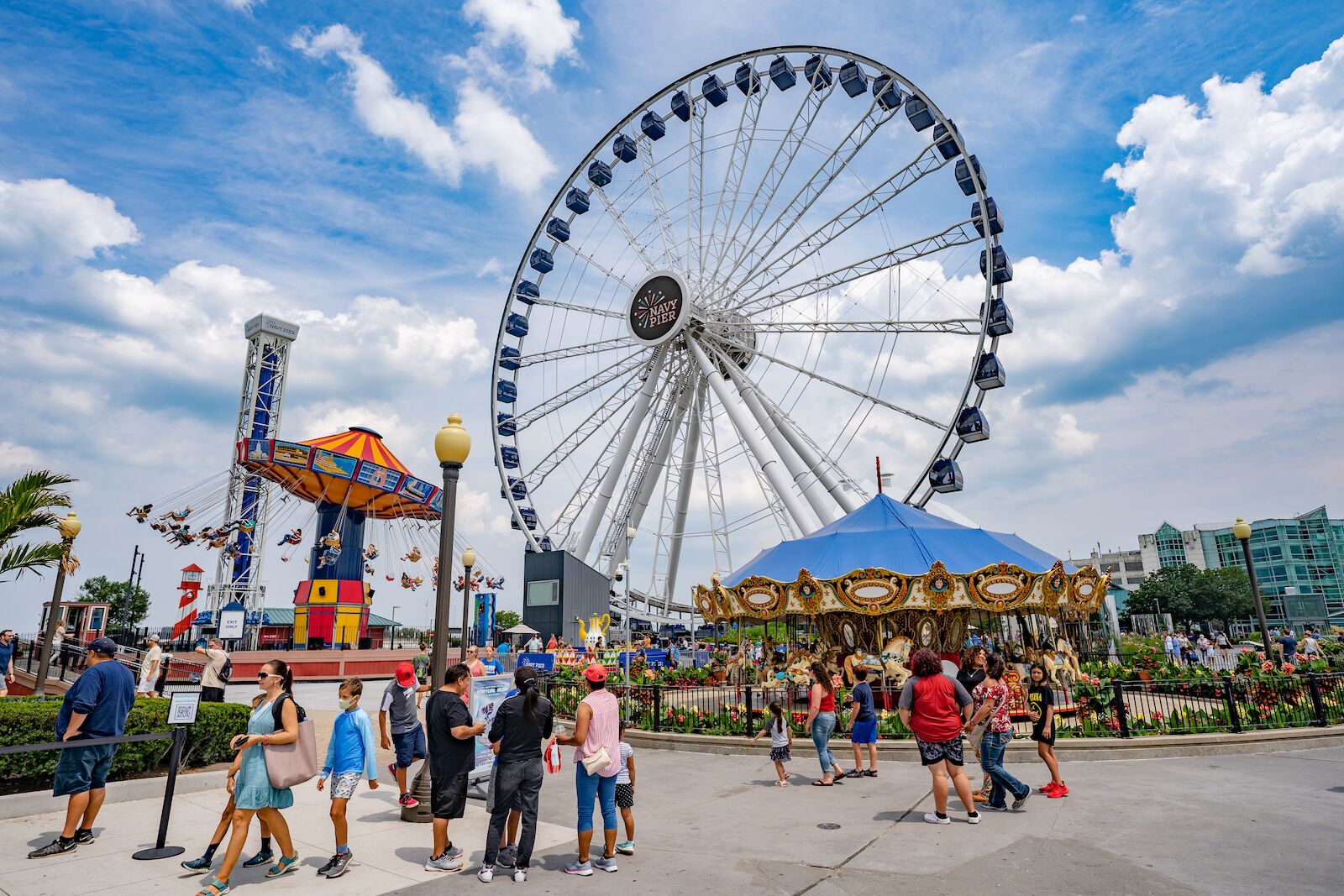 One of Chicago’s most famous waterfront destinations, Navy Pier stretches 3,300 feet along the shores of Lake Michigan. It’s full of attractions, from carnival rides and games to museums and theaters, plus tons of places to grab a bite or drink. Two Navy Pier sites top the rest when it comes to seeing the Chicago sunset. The first is Centennial Wheel, which reaches almost 200 feet at its tallest point, and the second is Offshore Rooftop & Bar, the largest rooftop bar in the US. The timing might get tricky if you’re set on seeing the sunset from the top of the Ferris wheel, but Offshore’s 20,000-square-foot terrace is as good of a backup plan as they come. 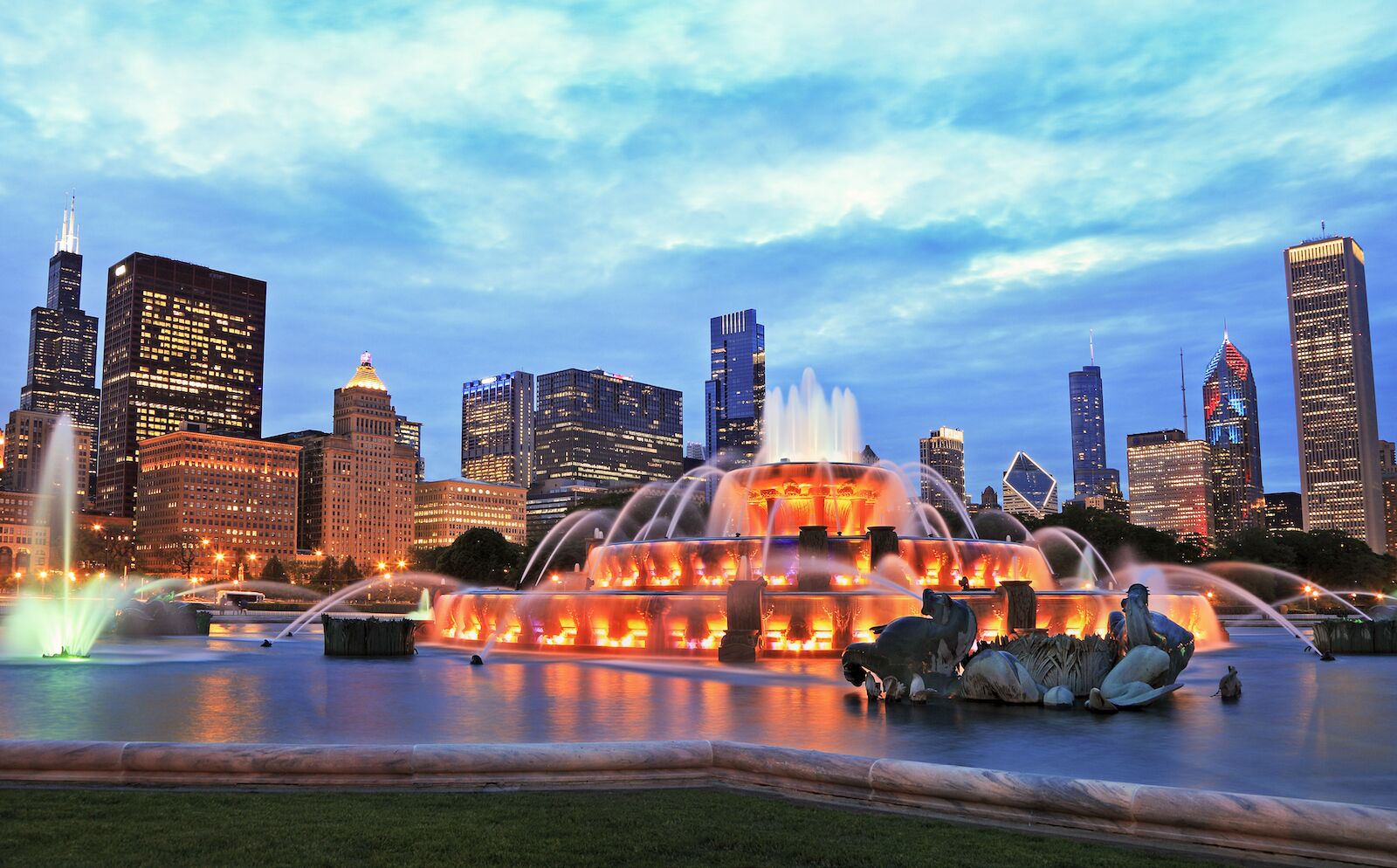 Chicago’s Lakefront Trail is one of the world’s best urban hiking trails. It’s also one of the city’s finest sunset-watching spots. Hugging Lake Michigan for 18 miles, the Lakefront Trail connects to a long list of Chicago’s parks and beaches. Promontory Point is among the most scenic stops on the trail and an excellent place to be come sundown. But if you’d rather see the sunset opposite a major landmark, the Lakefront Trail also passes by Buckingham Fountain, a massive fountain in Grant Park that stages epic hourly water shows between May and October. 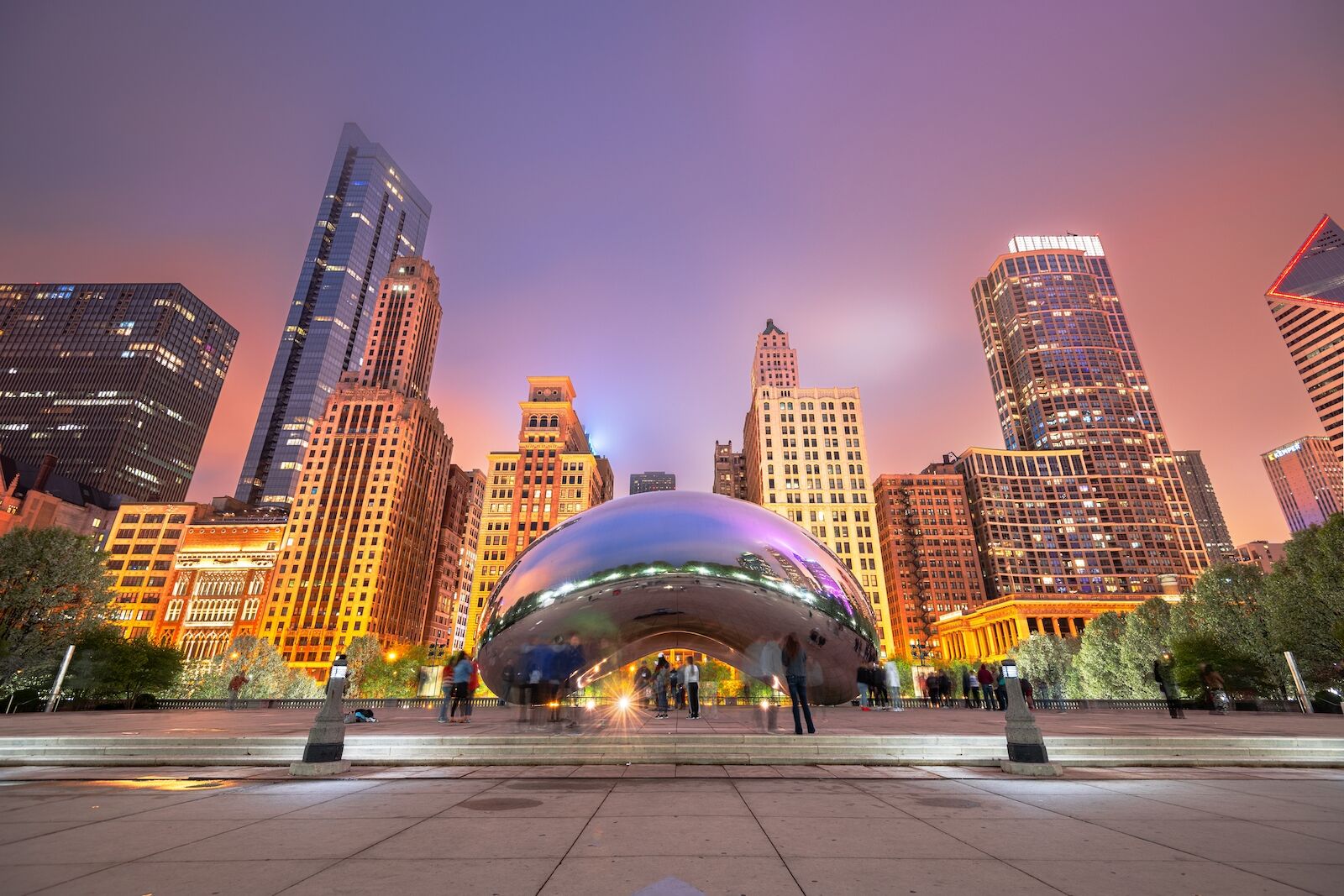 Millennium Park’s most recognizable landmark is Cloud Gate, better known as “The Bean.” The stainless steel sculpture is selfie central for Chicago visitors, and it could be cool to see the sunset’s warped reflection in The Bean. But Millennium Park occupies 25 acres of Grant Park, which covers almost 315 acres of the Loop District, and there are cooler places to see the sunset. There’s Lurie Garden for one, an urban oasis that looks like a field you might find in the French countryside, or the Boeing Galleries, an outdoor art park filled with modern sculptures. 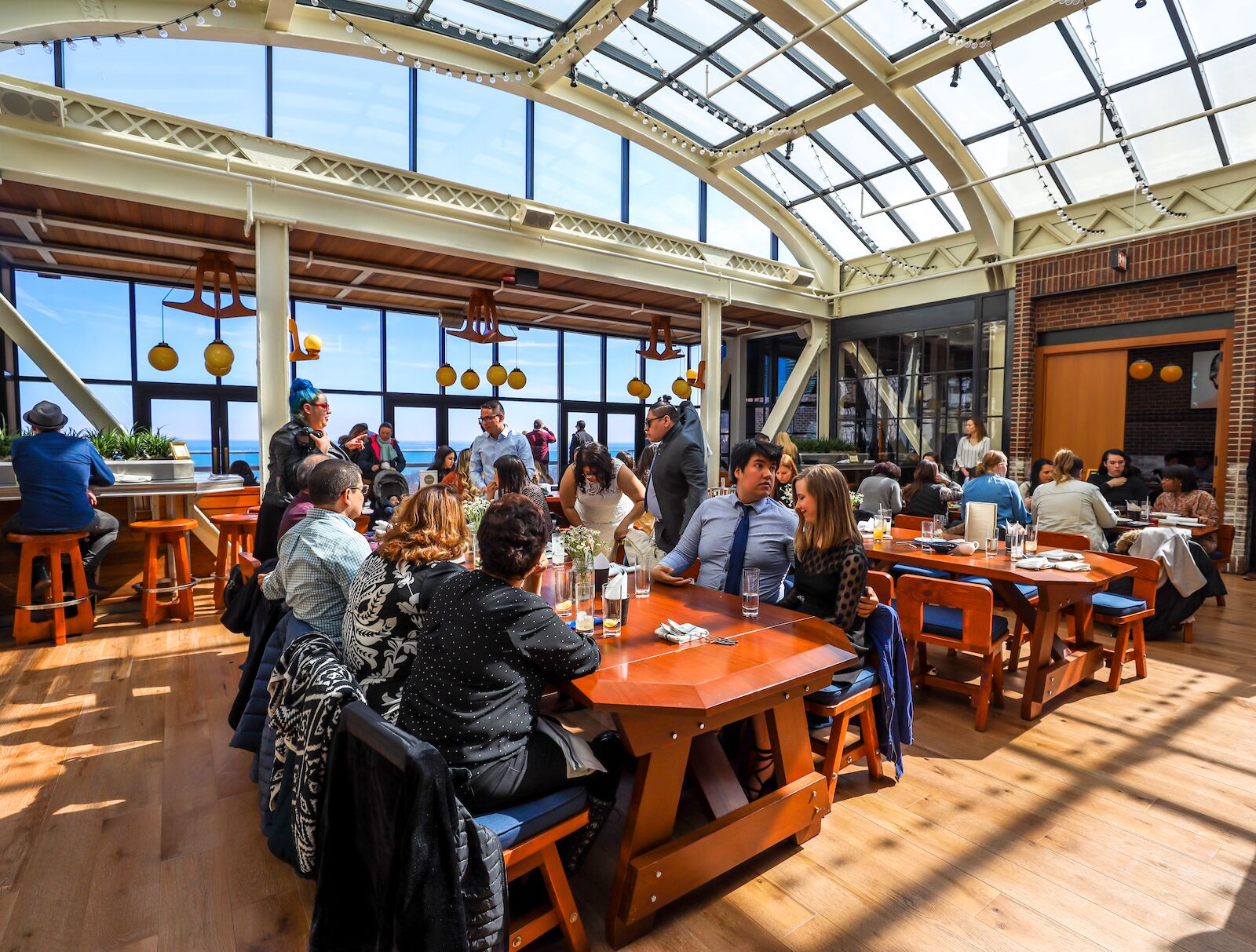 If you’re in Chicago, it’s nearing sunset, and you’re a sucker for a rooftop bar, book it to Cindy’s Rooftop. Cindy’s is located 13 stories above Millenium Park atop the Chicago Athletic Association Hotel. It has two seating areas: a glass-enclosed indoor dining area and an outdoor terrace. Come for dinner — everything from oysters on the half shell, striped aguachile, and queso fundido to rigatoni bolognese, chicken shawarma, and a porterhouse for two — or just for cocktails, mocktails, craft beers, or biodynamic wines in the open air. 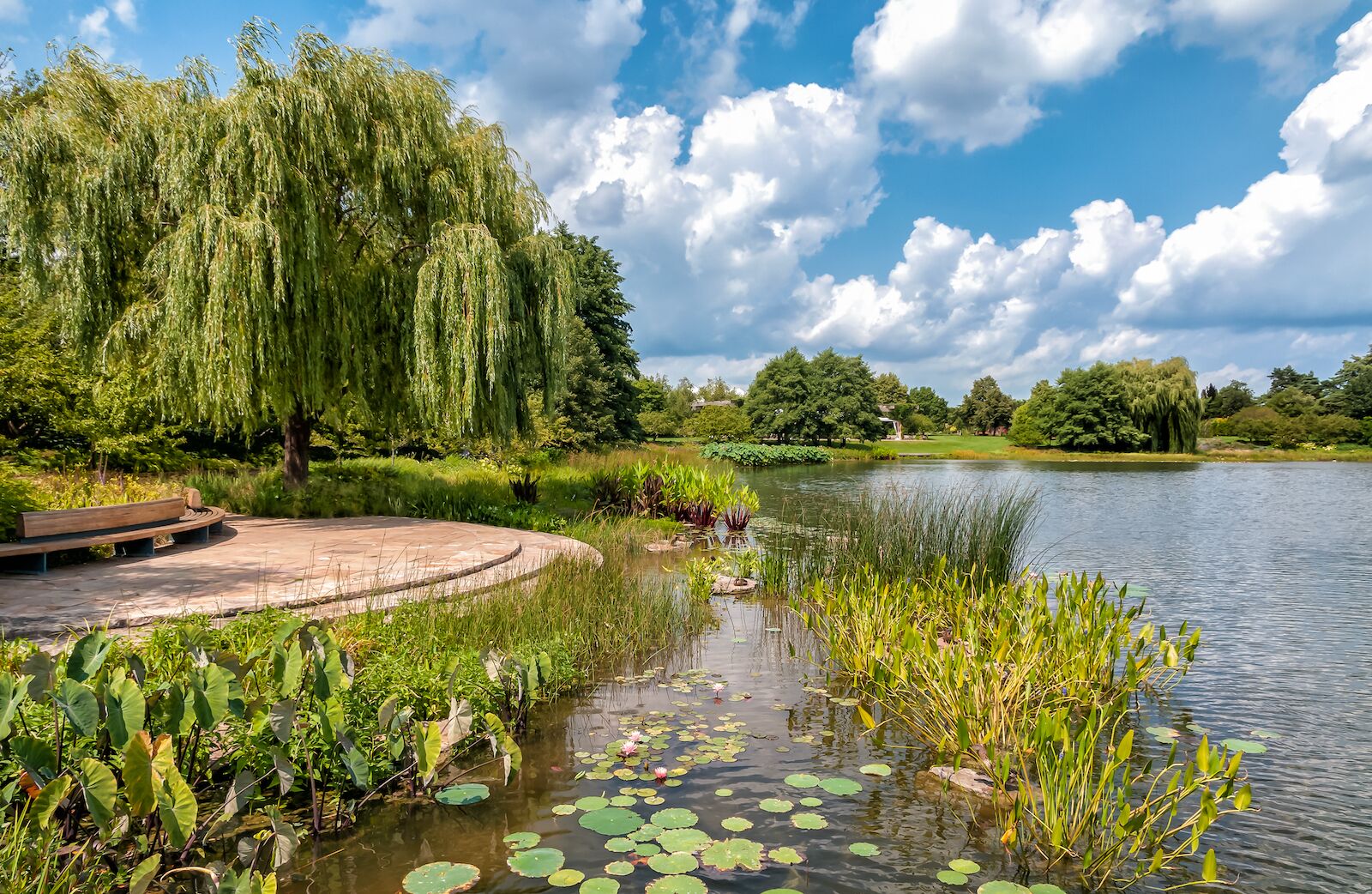 Chicago’s botanic garden is actually a network of 28 gardens and four natural areas. There’s an aquatic garden, a rose garden, a model railroad garden, a Japanese garden, a bulb garden, a waterfall garden, and a fruit and vegetable garden, among others. There are also features such as greenhouses and islands, including five-acre Evening Island, which alone houses hills, woods, meadows, and lakes. Basically, there are a million dreamy settings to watch the Chicago sunset. Different areas of the botanic garden have different closing times — none later than 8 PM — so check the website before you visit. And cross-reference what time sunset is that day to guarantee you’ll have time to watch it go down. 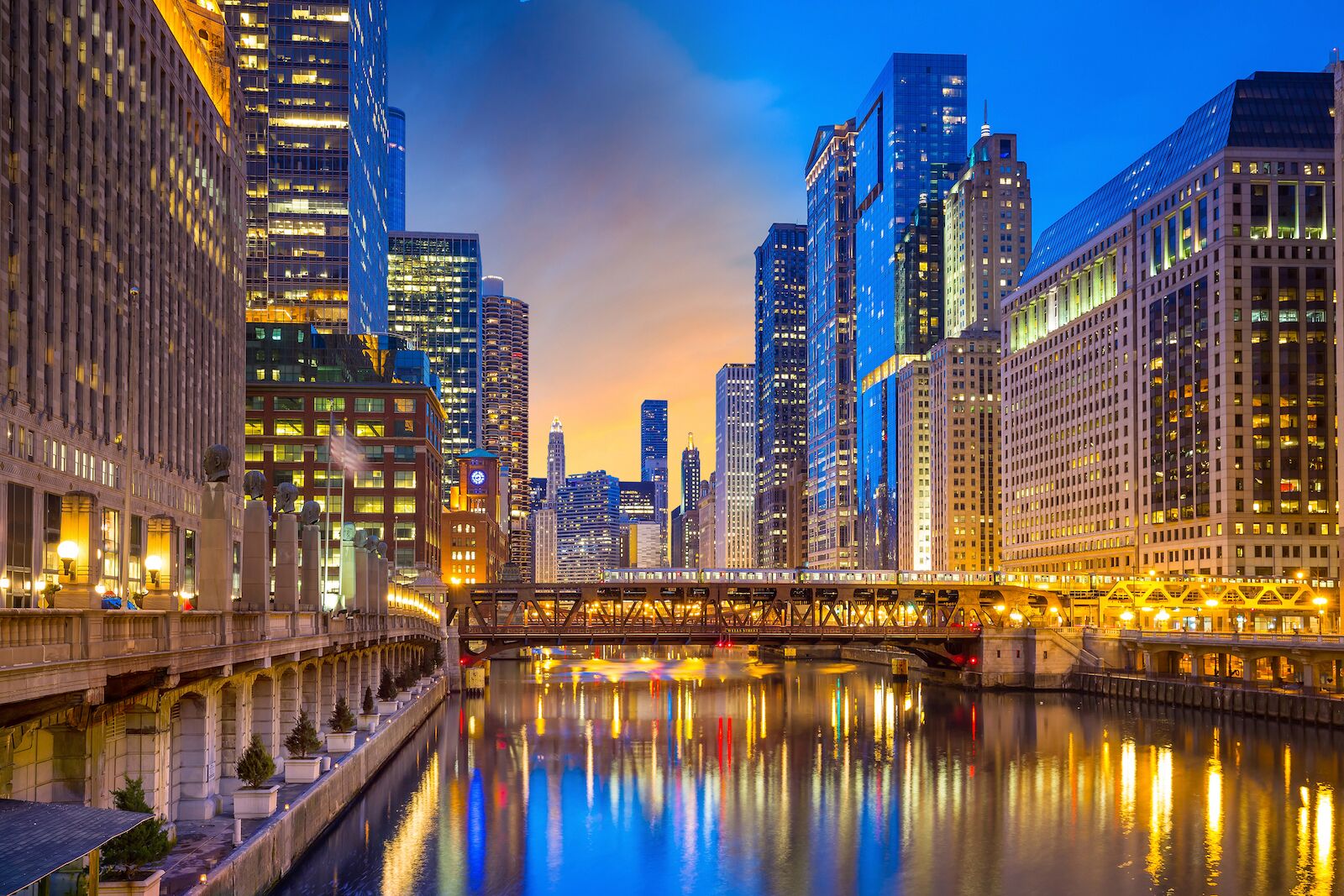 Compared to the Lakefront Trail, Chicago’s Riverwalk is hardly a walk at all. But the 1.25-mile path does capture some iconic angles of the downtown area from Lake Michigan to Lake Street, including the view of DuSable Bridge over the Chicago River. The photo ops along the riverwalk are a good enough reason to come round at sunset, but the real perk is being a stone’s throw from some of the city’s most scenic restaurants and breweries for a post-sunset meal.

TravelA Visual Guide To Every Building in the Chicago Skyline
Tagged
Travel Chicago, IL, United States
What did you think of this story?
Meh
Good
Awesome