Sometimes, doing just one outdoor activity in a day isn’t enough. You want a morning surf followed by an afternoon hike, topped off by a skyline view worthy of cracking open a summit beer. There are cities all over the world where you can access both beaches and mountains, but we want places where you can wake up, catch that surf or a seaside cup of coffee, and then be in the thick of the mountain pines in time for a late brunch.

Some of these cities will even let you hit the sand and snow — for a surf then a ski — in the same day, without having to call in sick to a dinner shift. These six cities not only make this easy to do but are also the kinds of places where you likely won’t be the only person doing it. 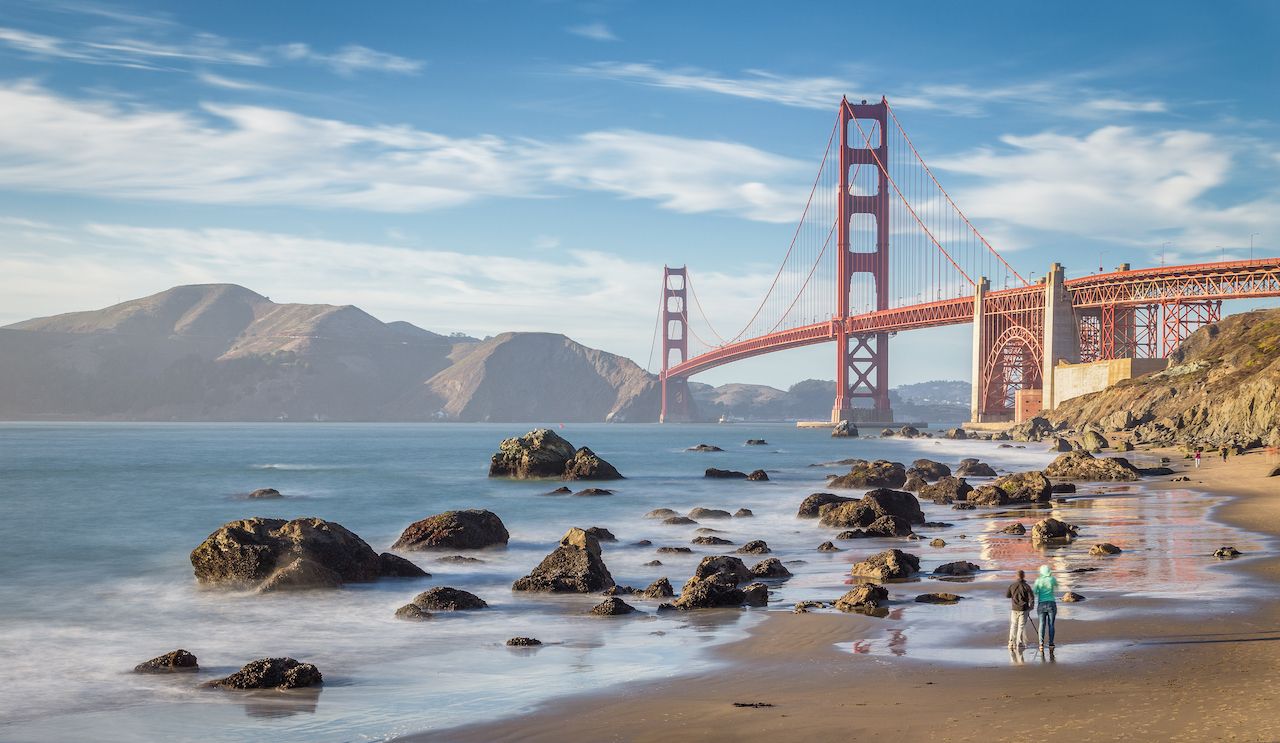 Here’s the thing about San Francisco: Its people are diverse, they’re worldly, and most of all, they’re innovative. And not just when it comes to technology. They’ve managed to turn their cold-water, northern California city into a prime surf destination in a state with no shortage of them. Just check out SF’s Ocean Beach, which a few years ago hosted an international surf championship won by the world’s winningest surfer, Kelly Slater.

But beyond the beach, SFers have managed to turn nearly everywhere around the city into a place worthy of outdoor exploration. Keep it close at Golden Gate National Recreation Area, head across the Golden Gate Bridge to Muir Woods, or drive west on I-80 for three-four hours to Lake Tahoe and its dozen ski resorts, including Squaw Valley, home of the 1960 Winter Olympics games. The same few hours also puts you in Yosemite National Park, where you can hike, climb, and camp to your heart’s content. 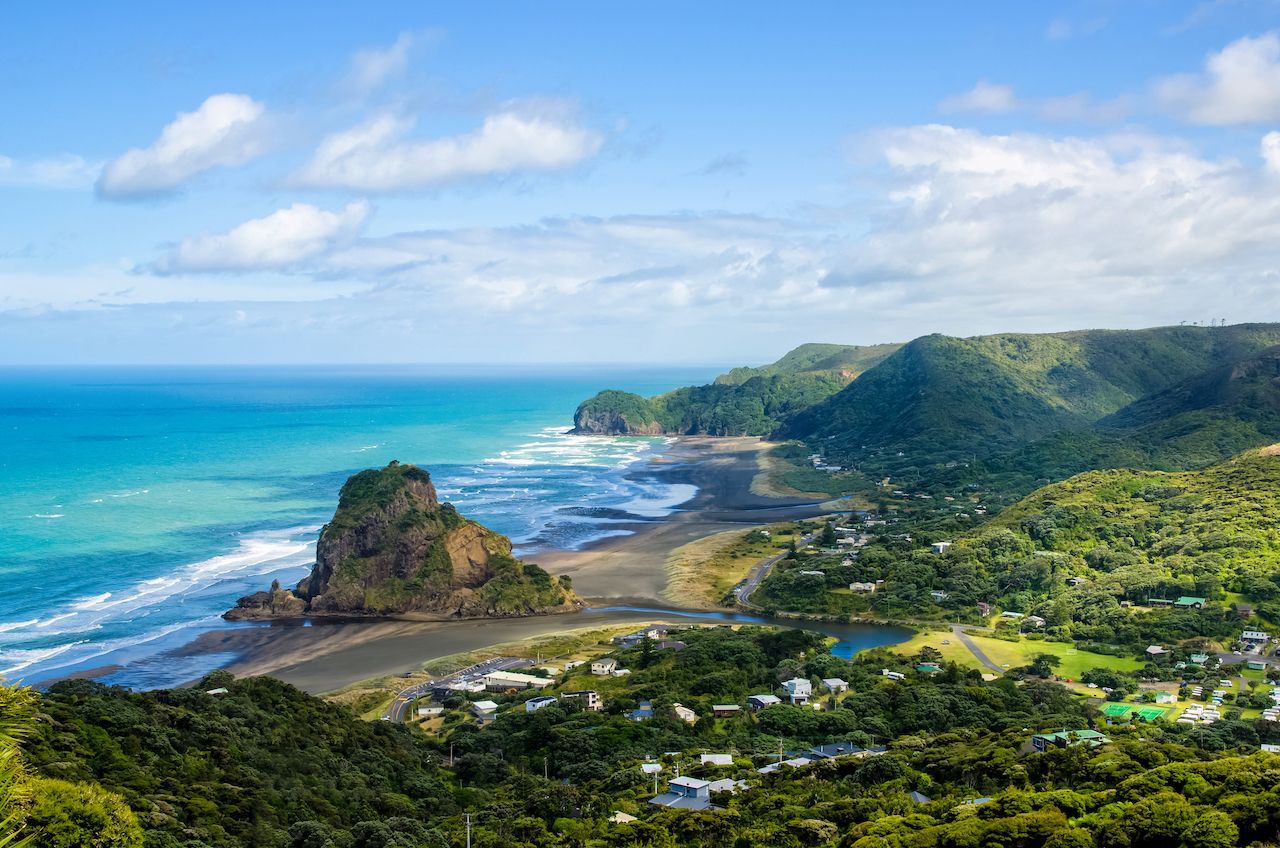 Auckland surfers can reach waves just 30 minutes from downtown at Maori Bay, but the best surfing is at Piha, just a 45-minute drive away. Just behind Piha, the Waitakere Ranges or Hunua Ranges are great for post-surf hiking or mountain biking. Skiing is available though it’s about four hours away at Turoa and Tukino.

Auckland is also the hub of New Zealand’s cafe scene. Another cool thing about Auckland is that its southern-hemisphere location means you can prioritize your favorite activity and do it when its off-peak back home. Skiers, for example, should head down in July or August when the snow is long gone in most of the US, but the pow and surf are in full-on swell mode down here. 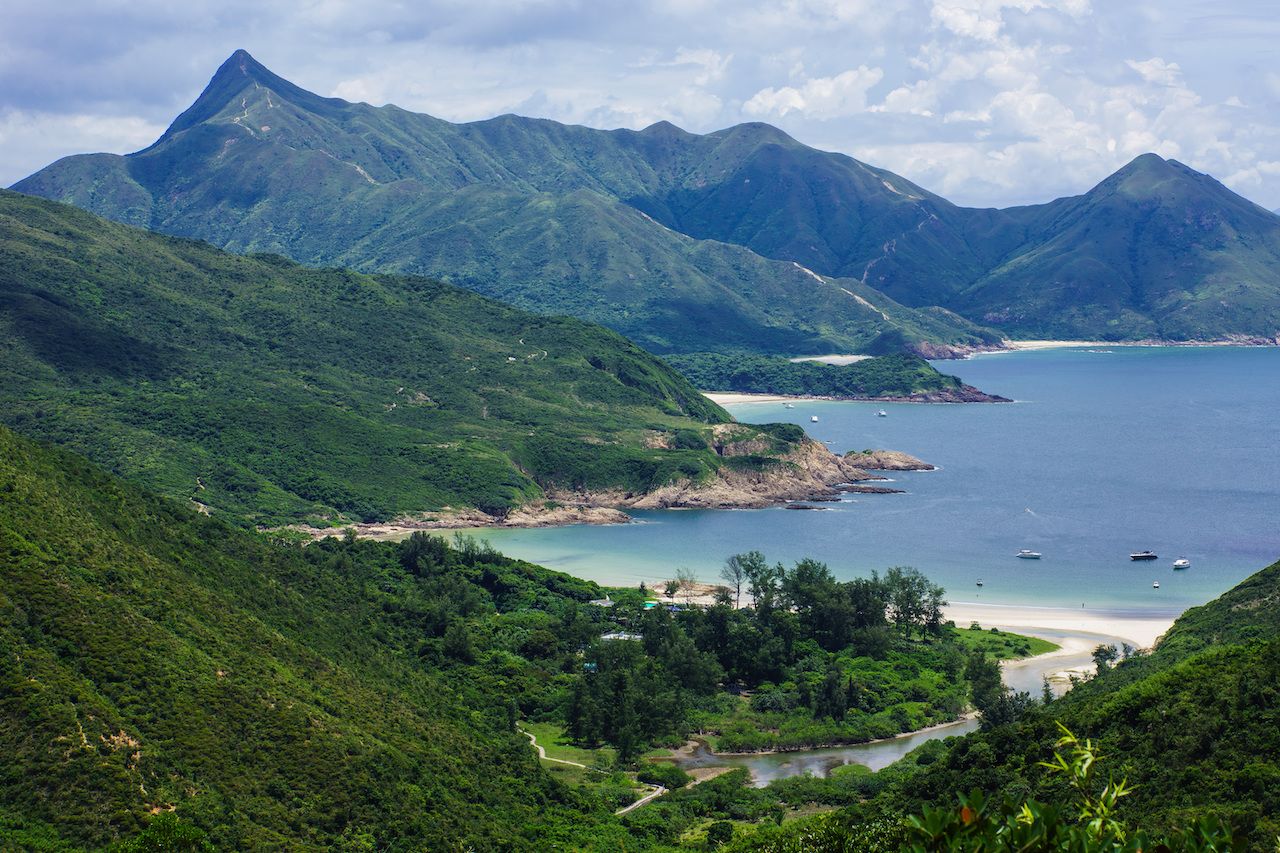 Hong Kong is a hectic place, the type of city that can send beach and ski bums accustomed to the laid-back vibes of small-town life into a panic just walking down the street to dinner. But what distinguishes this city-state — a Special Administrative Region connected to China by land and road but a world away ideologically — is that it’s surprisingly close to stunning natural mountains you can explore and even backpack in.

The city of seven million is effectively split in two, with the southern part on Hong Kong Island and the northern part on a peninsula that leads to the Chinese border city of Shenzhen. Beyond the immediate sightline of towering skyscrapers, much of the land Hong Kong occupies is divided into a series of country parks lined with trails, many of which conclude at sandy beaches. To top it off, many of these trails and beaches can often be accessed by public transit from anywhere in the city. Hike the Dragon’s Back down to the Shek-O or Big Wave Beaches for the ultimate win: a strenuous hike, epic waves, and views of both city and rugged coastline. Surf rentals are available at Big Wave Beach in case you don’t feel like lugging your board on a long, sweaty hike or stuffing it into the back of a taxi. 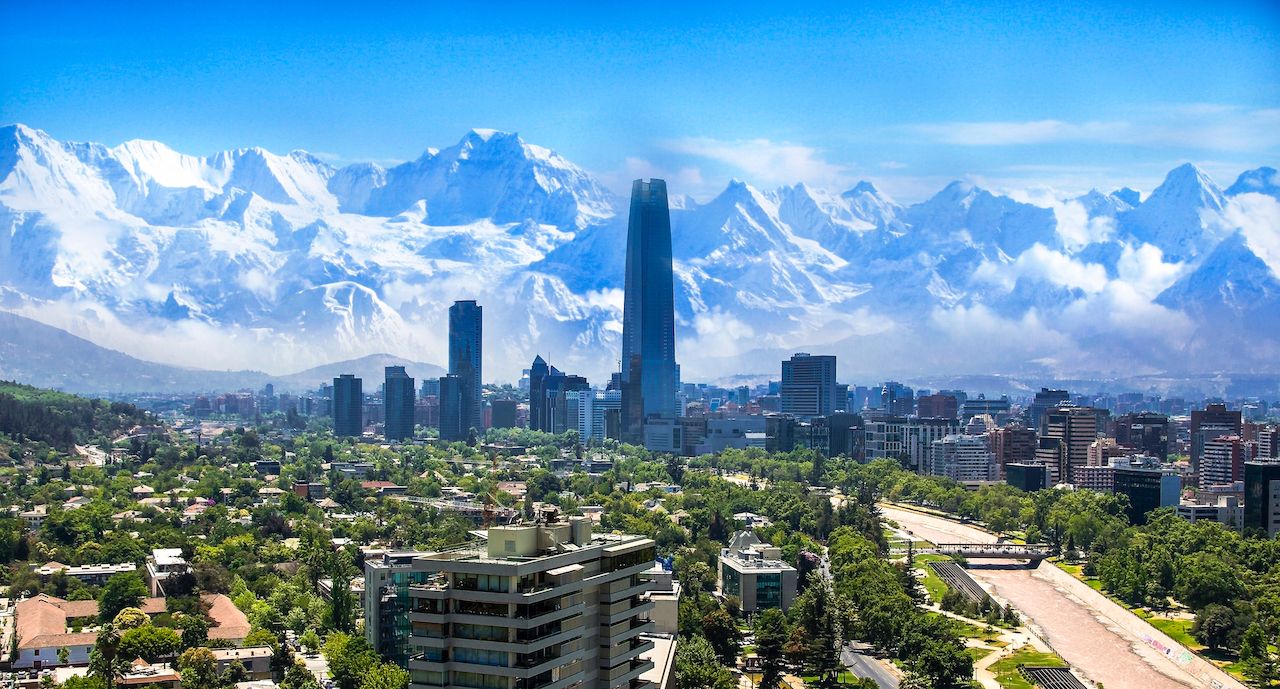 If you’re even the slightest bit outdoorsy, Patagonia likely has a spot on your must-visit list. But before you head to the deep south of South America, stop in Santiago. The Chilean capital is just over an hour from the sea and fewer than 60 minutes from wintertime skiing. Beaches north of Valparaiso, like Maitencillo and Cachagua, are fewer than two hours via highway 68 and offer excellent surfing all year. (And you’ll need a thick wetsuit all year.) In fact, Chile is packed with stunning beaches that beckon surfers, partiers, families, and sun seekers.

Santiago’s biggest draw for the outdoorsy, however, is its ease of access to high-intensity hiking and skiing. Inside the city itself, Cerro Pochoco and Cerro Provincia are medium intensity hikes. After you’ve done these two, head out to Yerba Loca Park. Then, get out into the backcountry on a long-distance trek. In winter, the Valle Nevado resort is just 45 minutes from the north side of the city. A longer drive gets you to the famed Portillo resort, which opened 70 years ago and is the oldest ski resort in South America. 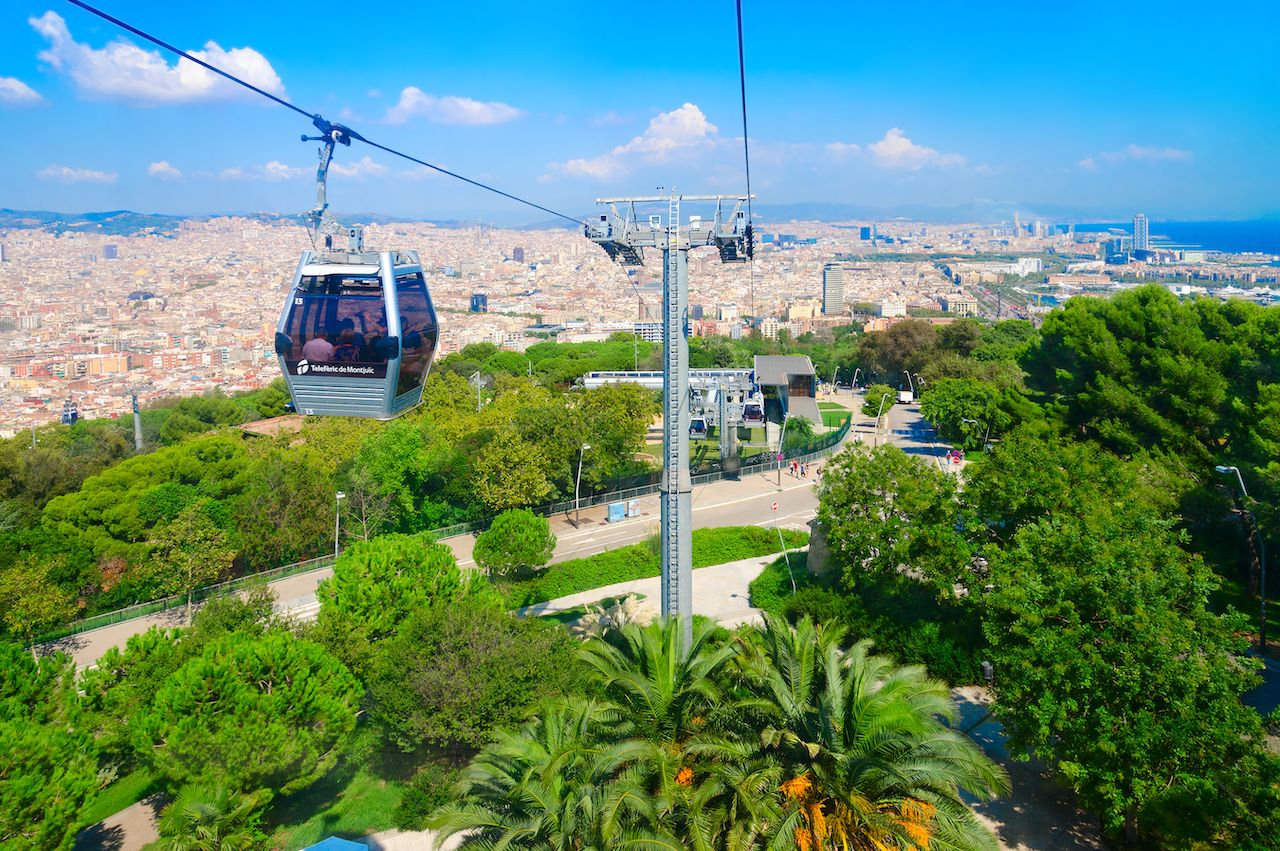 Many visitors come to Barcelona for the historic architecture, the cafe culture, the party scene, or to indulge in the markets and atmosphere of Spain’s most vibrant city. Most will visit a beach and lounge in the sun. Barcelona isn’t just a 90-minute drive from the stunning beach coves of the Costa Brava; it’s right next to beaches that are hopping all summer long. It may be the Mediterrean, but you can still surf small and fun waves at Barceloneta Beach or, just south of the city, Castelldefels and Sitges.

While plenty of visitors head to the sand in Barcelona, and maybe even have a long lunch at a seaside restaurant, far fewer visitors head west into Serra de Collserola Natural Park. They should, though. The stunning park covers the mountain that overlooks the city; its hiking and mountain biking trails are popular with locals. A bit further west takes you to the Montserrat Monastery or, due north, to the Consorci del Parc de la Serralada de Marina.

You could catch a beach session in the morning and then head up the cable car to Montjuïc, the city’s urban peak, in the afternoon. Or you could climb in the Collserola. To go all out, though, you could drive the two hours to the Masella ski resort in the La Cerdanya Valley. 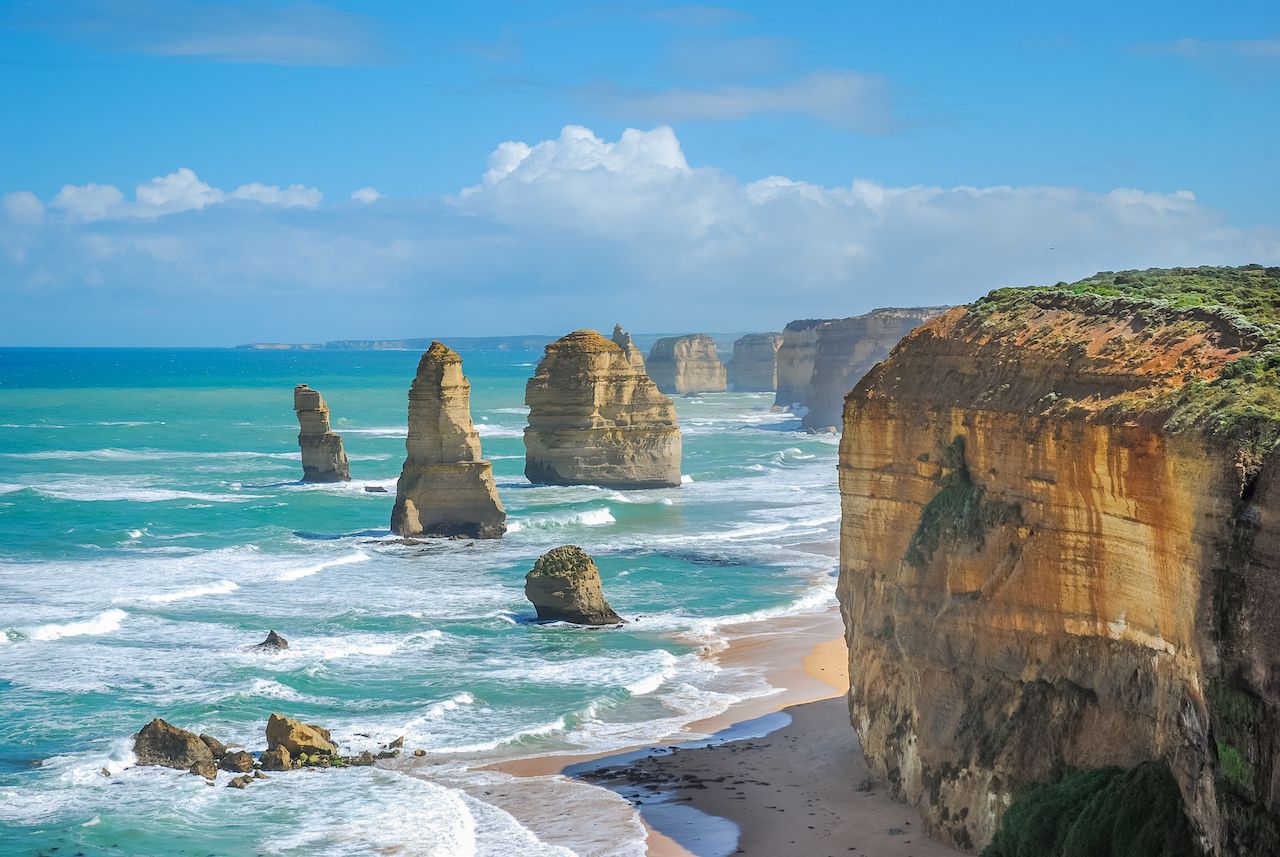 Of Australian cities, Melbourne isn’t the first that comes to mind for outdoors access. This is likely due to the fact that the coffee and conversation in Fitzroy can be so good it’s tough to peel yourself from the cafe table, let alone escape the city for a jaunt in the wilderness.

But you must muster the discipline because the Yarra Ranges await. Yarra is a national park with hiking, biking, and camping to rival the lower Appalachians and even a dose of skiing tossed in for good measure fewer than two hours from most parts of the city. As for beaches, the city has it all. Surf at Mornington Peninsula, Torquay, or along Great Ocean Road on the way to Victoria. Relax over a sunset at Elwood Beach. People watch at St Kilda. None of these beaches are far from a craft beer or locally roasted cappuccino.

Surfing2019 is the year to finally try surfing. Here’s where to do it.
Tagged
Parks + Wilderness
What did you think of this story?
Meh
Good
Awesome

6 beautiful frozen waterfalls in Montana to see this winter
The ultimate guide to all 2022 national park permits in the US for hiking, backpacking, and more
This European country has 6,000 grizzly bears. Here’s where to see them up close
5 states with the most scenic and laid-back nude beaches
The 9 cutest baby animals born in 2021