Trains have a certain air of romance about them, a small, contained space rumbling along the countryside where strangers meet and real-life is suspended. Adorable back woods bed and breakfasts have much the same charm, albeit without the rumbling. Thanks to Airbnb, you can now enjoy the best of both worlds by spending the night in a converted train car. People all over the world have combined old trains with bed and breakfasts to create ultra-romantic getaways surrounded by mountains, rivers, and sometimes buffalo. From a caboose in the Great Smoky Mountains to a converted dairy car in the English countryside, here are 10 of the coolest converted trains that are now Airbnbs. 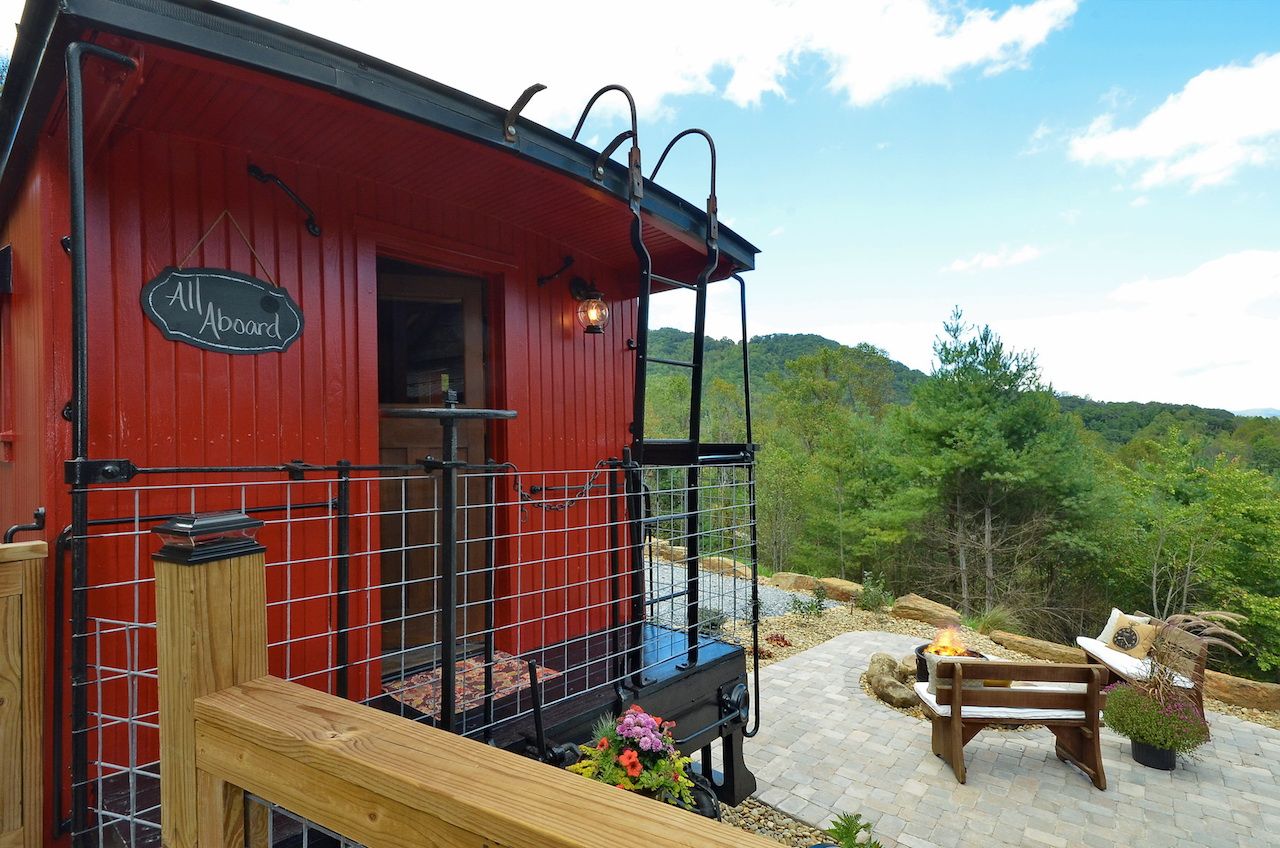 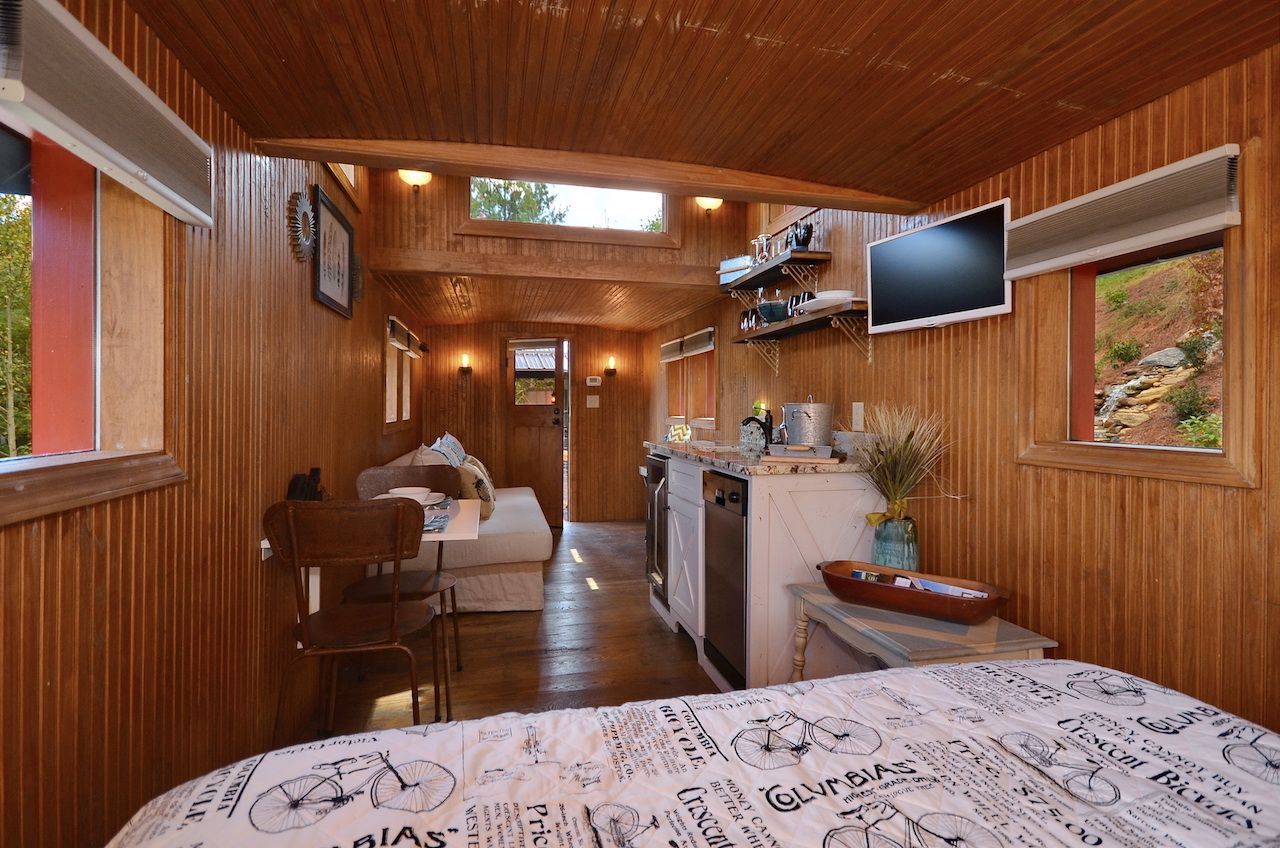 Combining the efficiency of a tiny house with the upscale luxury of 1920s train travel, this fully restored caboose is a unique mountain getaway. The car is equipped with a queen bed and memory foam mattress, a full kitchen, and a fridge stocked with local beer and coffee. It’s connected via a few feet of track to the elegant Bath House, where you can enjoy an outdoor shower, Vera Wang Egyptian cotton linens, and a Bluetooth stereo connected to the bathroom. The location is right about half an hour from Asheville and 10 miles from Great Smoky Mountains National Park. And because it’s set on a 20-acre farm, you’ll often wake up to goats or horses strolling by your front door. 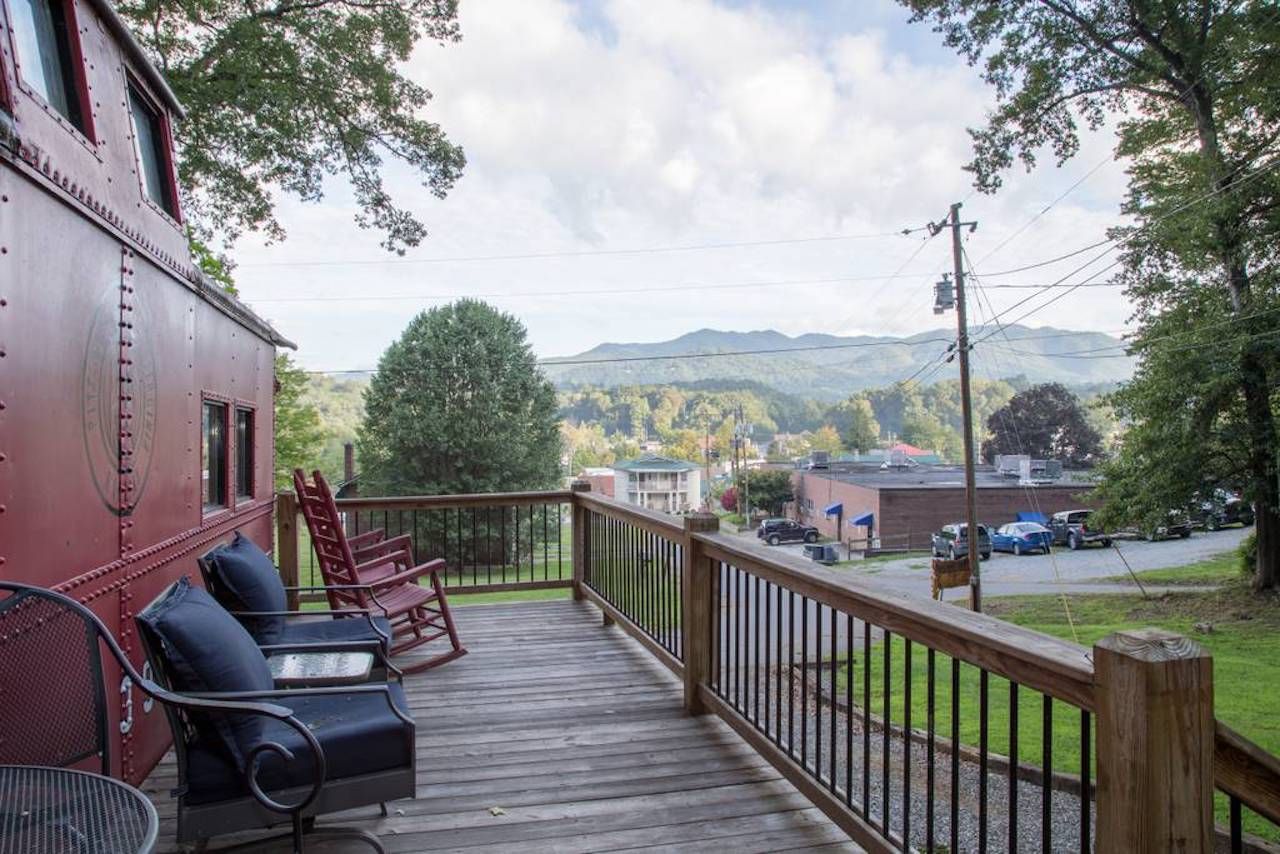 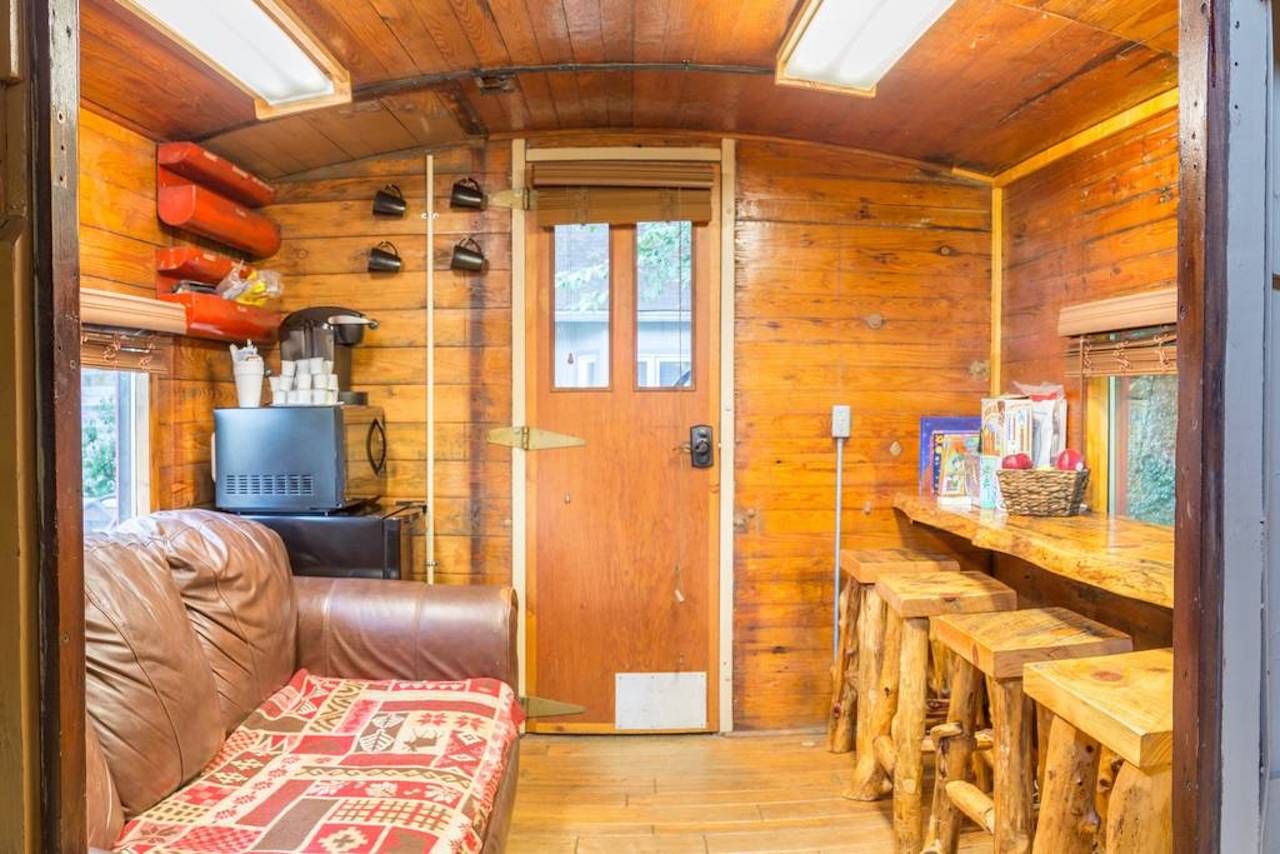 For families headed to Bryson City on the outskirts of Great Smoky Mountains National Park, this two-for-one lodging is ideal. You’ll get the run of both the two-bedroom house and the tiny caboose, so grown-ups can stay in the luxurious home and kids can share the bunk beds in the converted train. Or vice versa if you’re longing to do your own re-recreation of Step Brothers. Either way, the entire compound is less than a five-minute walk to the shops and restaurants of downtown Bryson City and is an ideal jumping off point for adventures in the park. 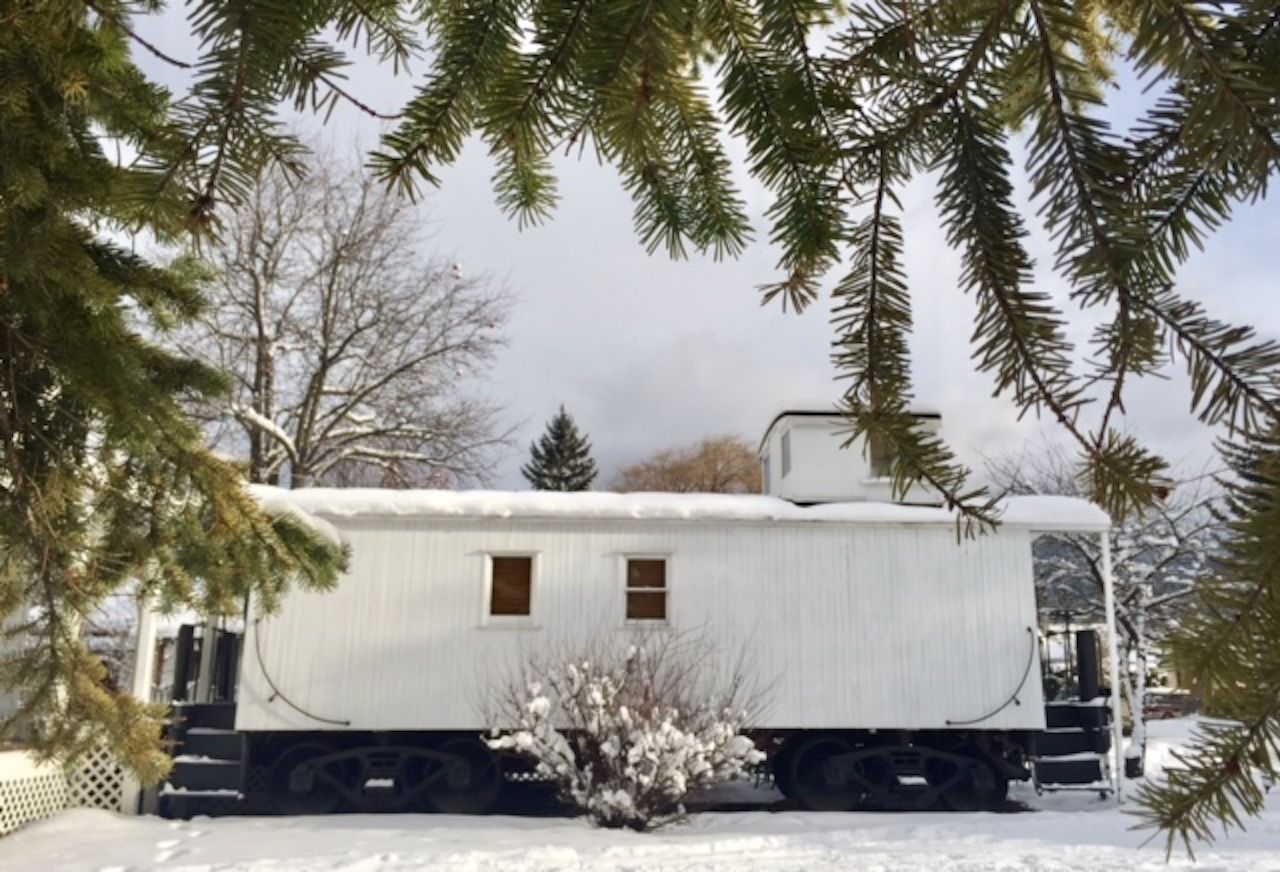 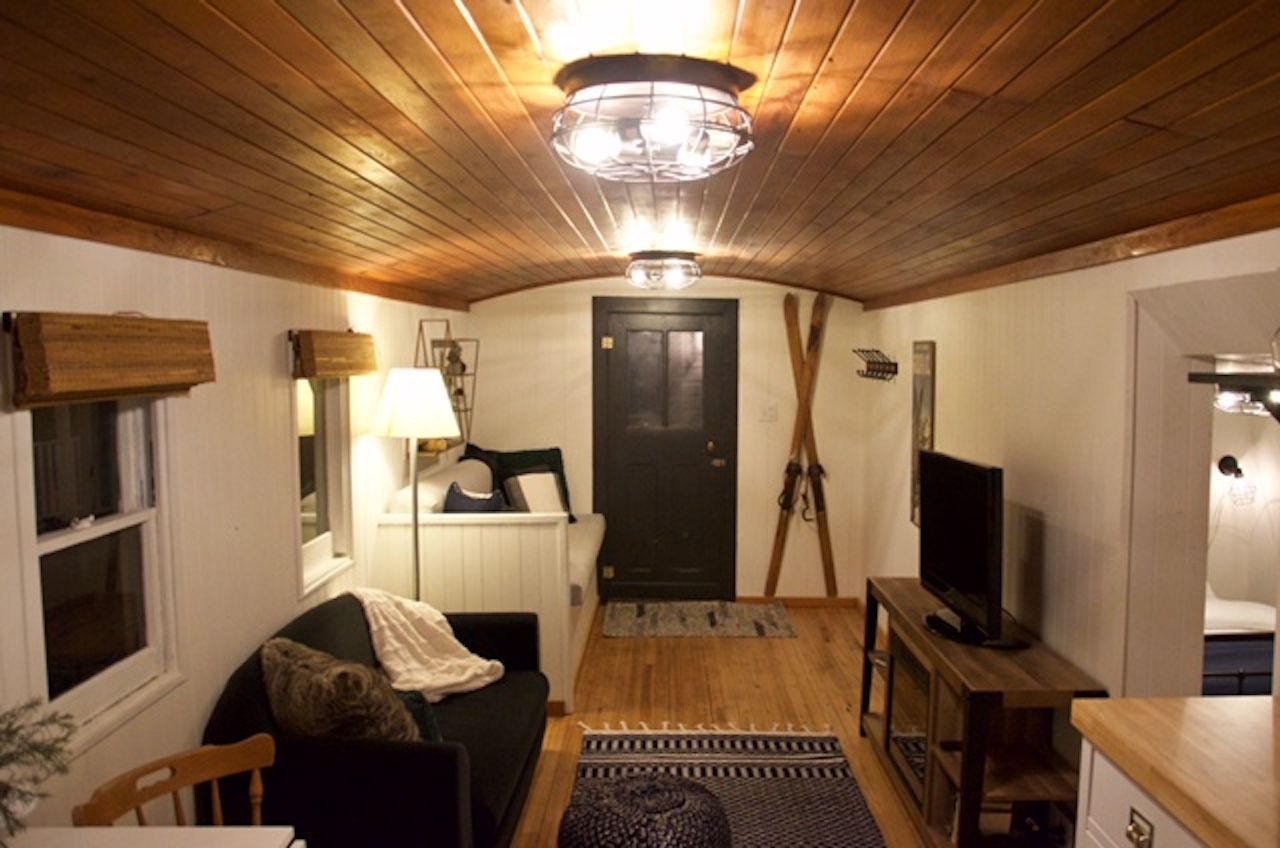 Though this vintage 1912 train is a bit more rustic than some other conversions, it’s perfect for the rough and tumble feel of the Canadian wilderness. The restored caboose is done up in fir hardwood, giving it the feel of a whitewashed mountain cabin set between the Canadian Rockies and Columbia Mountain ranges. It shares the lot with a historic home from 1893, and sitting outside on a cool evening gives the feel of frontier life over 100 years ago. That’s easily escaped inside, though, where WiFi and an Apple TV await alongside a coffee maker and microwave. You’ll also have access to a hot tub for cold mountain nights. 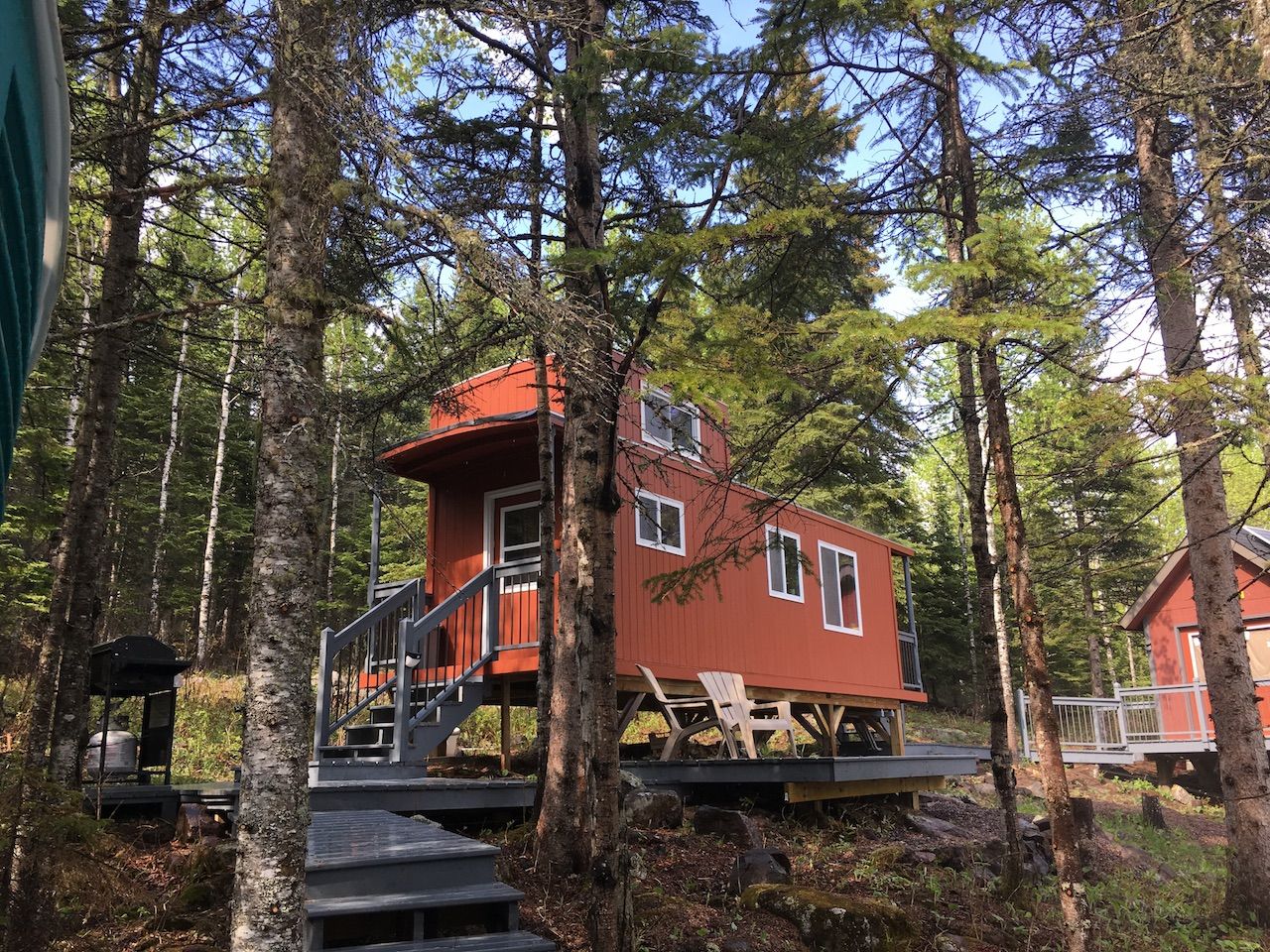 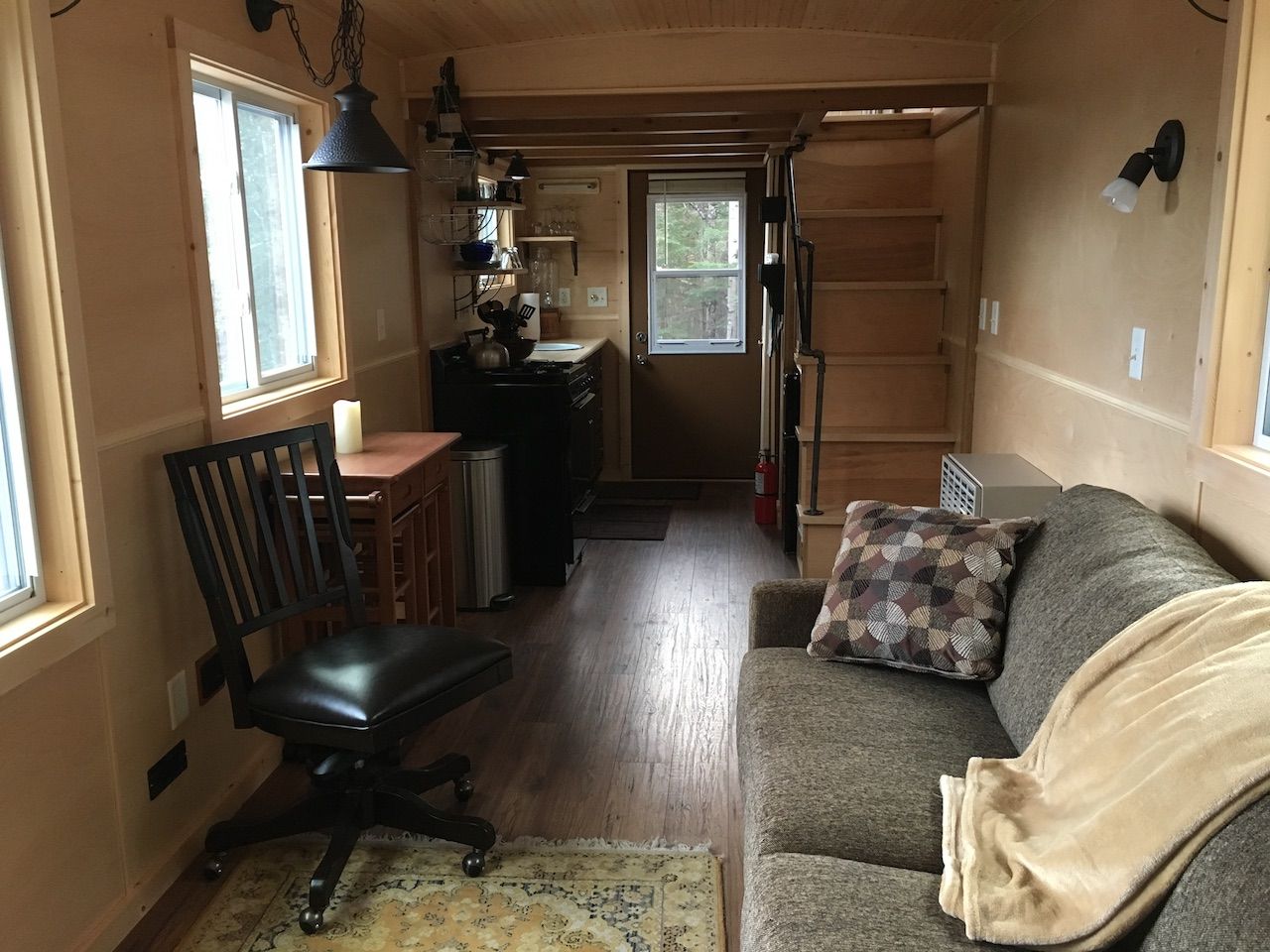 Say what you will about this rustic rail car set atop a hill on the shores of Lake Superior, the hosts have a sense of humor. The first sentence of the description reads “Little Lost Caboose is High-End GLAMPING; guests Bring Their Own Water.” It goes on to advise you’ll be staying in a solar-powered caboose with a solar shower, a chem toilet, and bedding that’ll cost you part of the security deposit to use. If you’re into minimalist escapes into the woods, however, it’s a fantastic value. Just remember that your power is limited to what solar batteries can hold. So maybe use this as a chance to disconnect and leave your laptop at home. 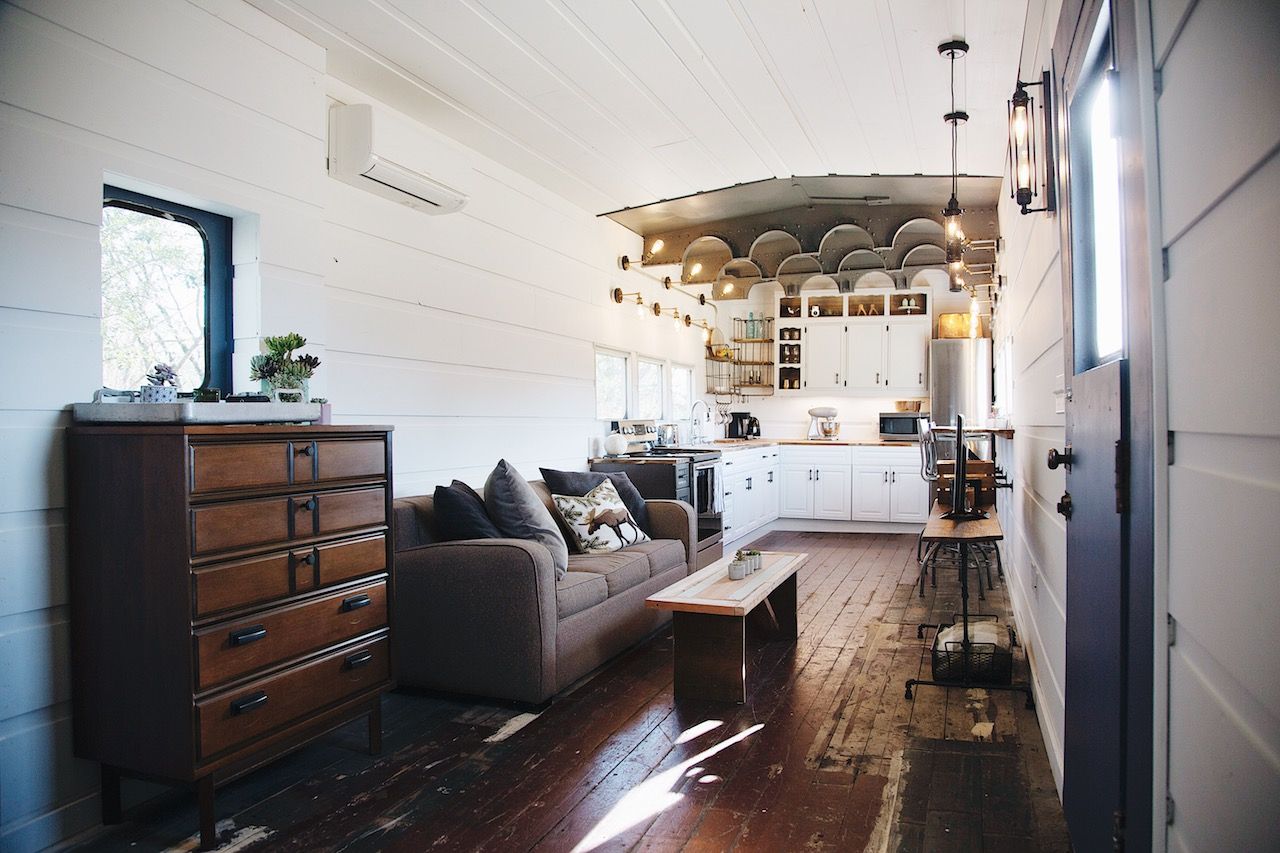 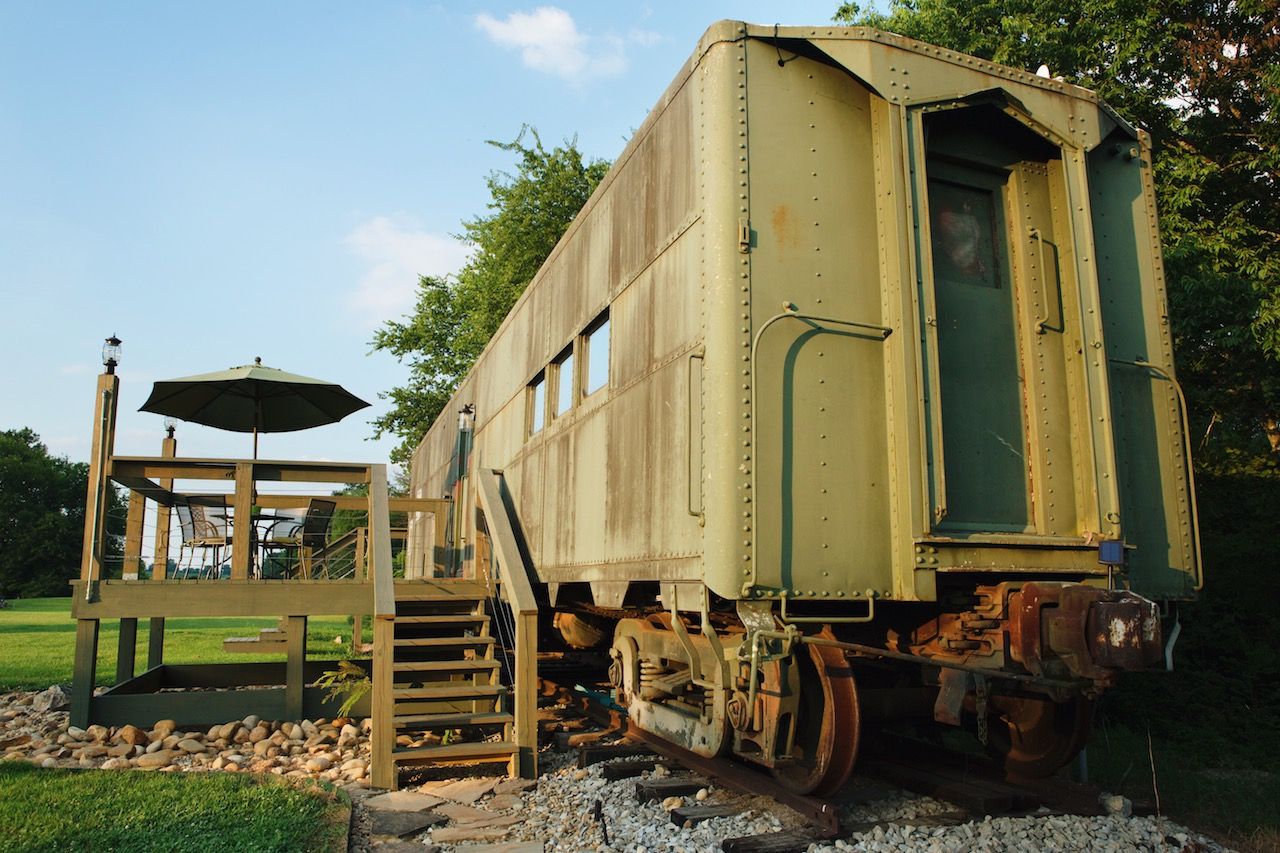 In perhaps the coolest conversion on this list, an old World War II troop transport kitchen car has been magically transformed into a beautiful, modern nightly rental complete with a full kitchen and front patio. From the elegant lighting to the chic appliances and beddings, it’s one of the most luxurious lodgings you’ll find at the base of the Great Smoky Mountains. It’s not for lack of effort, though; the project took eight months of solid work, which has paid off with appearances on HGTV and Country Living’s websites. Though you’re not close to much walkable, it’s still only a short drive into Knoxville or the wilderness of the national park. 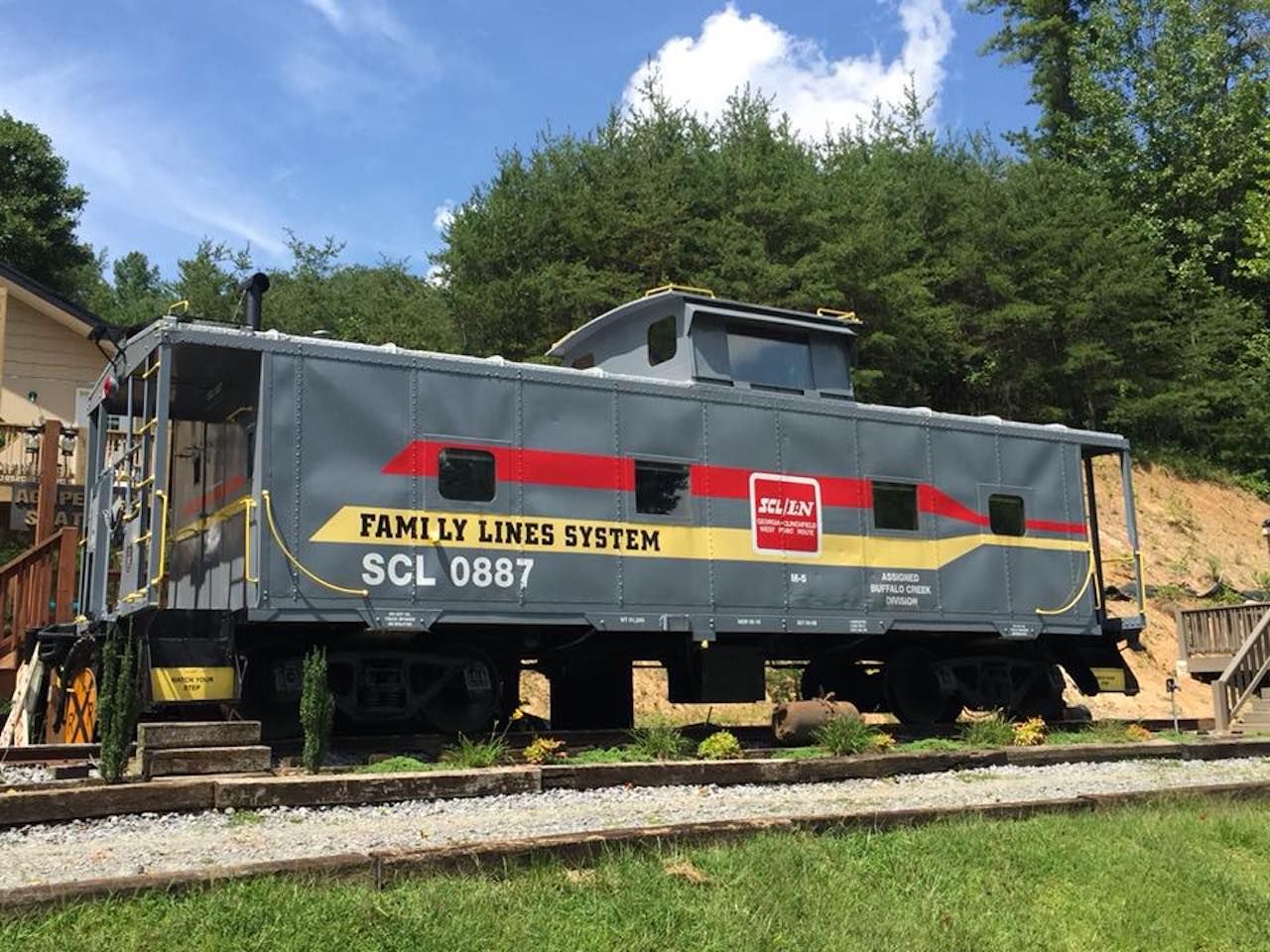 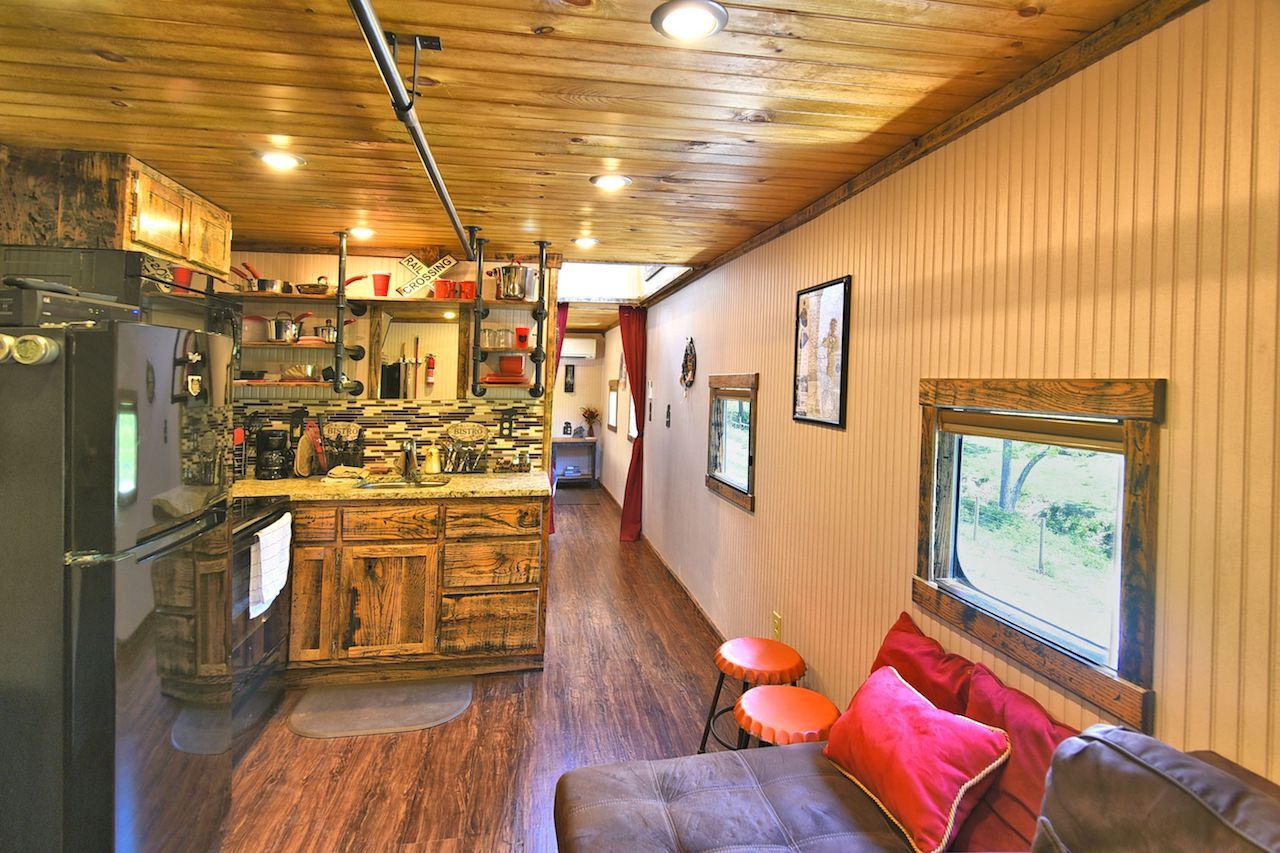 Give host Cheryl credit for not titling this “A home where the buffalo roam” because that would have been tempting. Instead, she features this 1960s caboose — fully redone in weathered woods with multiple televisions and a full kitchen — as part of the Buffalo Creek Vacations property. The 65-acre ranch has bison meandering about for guests to view, as well as daily feedings around 9:30 AM if people want a closer look. For train enthusiasts, the “depot” has a 30×50 “O” gauge model train layout on the second floor and a game room and laundry room on the main level. For wildlife viewing and cozy converted train relaxation, this might be the best spot near the Smokies. 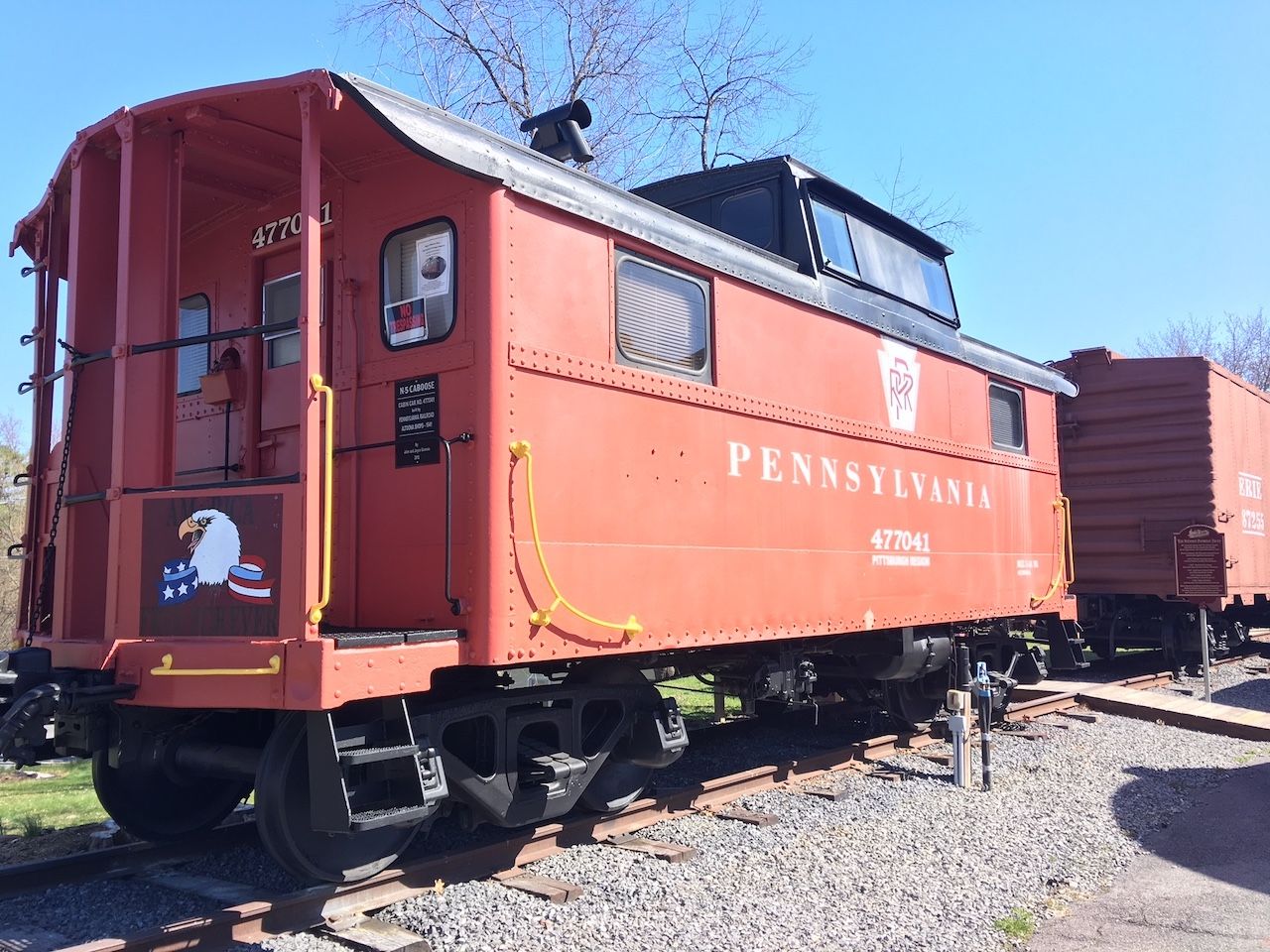 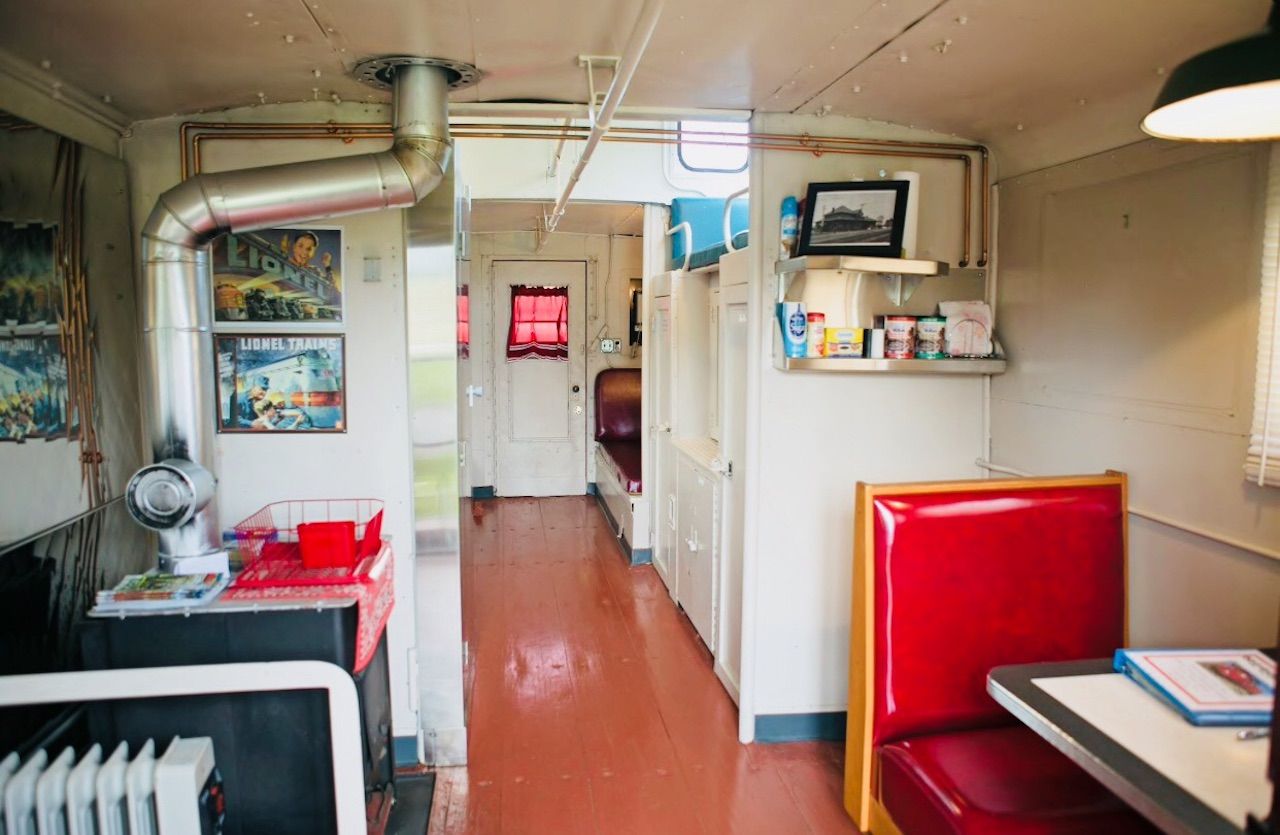 The interior of this caboose gets an A for authenticity, with steel walls in the bathroom and vinyl booths giving it the feel of a real 1940s train trip. Of course, this train doesn’t move, but it does sit alongside the historic Castanea Railway Station, complete with a kiosk where guests can learn about how this train operated over 75 years ago. There’s not a full kitchen and only a mini fridge, and the beds are small twins set up against the windows. But whoever said early-20th-century train travel was posh? And for under $80 a night, it’s one of the more unique choices in the state. 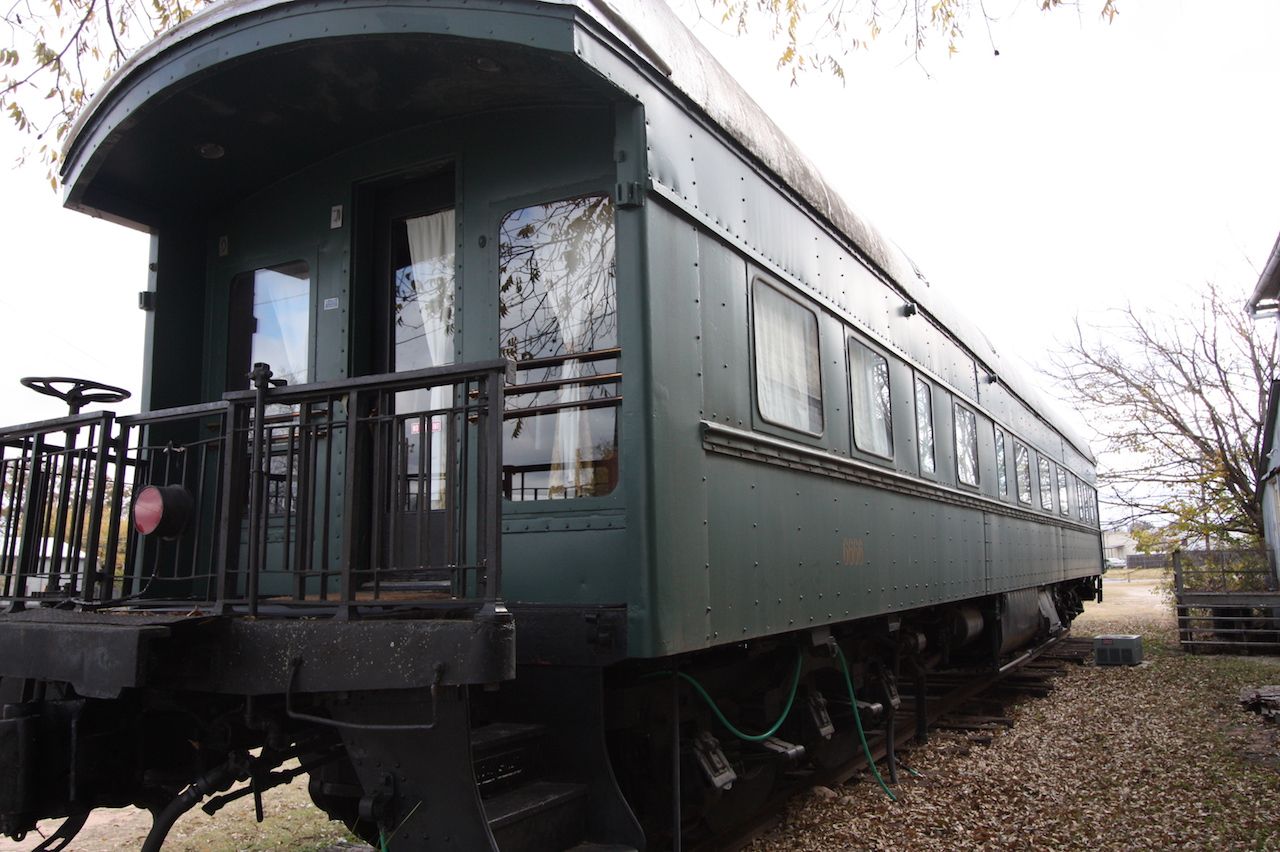 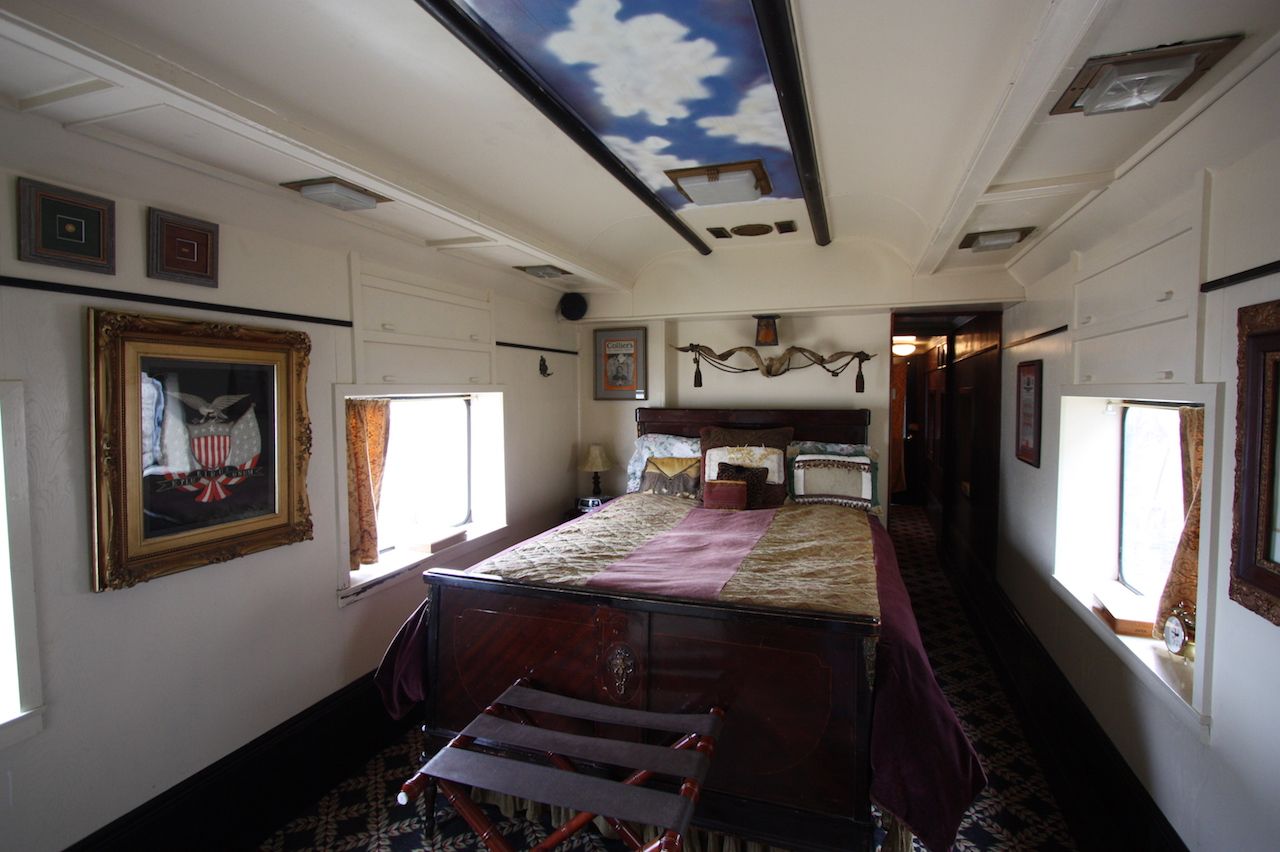 At first glance, one might ask how anything in Fredericksburg, Texas, is worth $280 a night. Aside from the National Museum of the Pacific War and some vineyards, there really isn’t much to the town. But this car might be a destination unto itself, a little slice of Gilded Age luxury that once housed Theodore Roosevelt on his way to the 6666 Ranch in North Texas. The long car is furnished with period antiques, animal antlers, and presidential paraphernalia, allowing guests to live like royalty from an age gone by — plus a flat screen, microwave, and DirecTV. 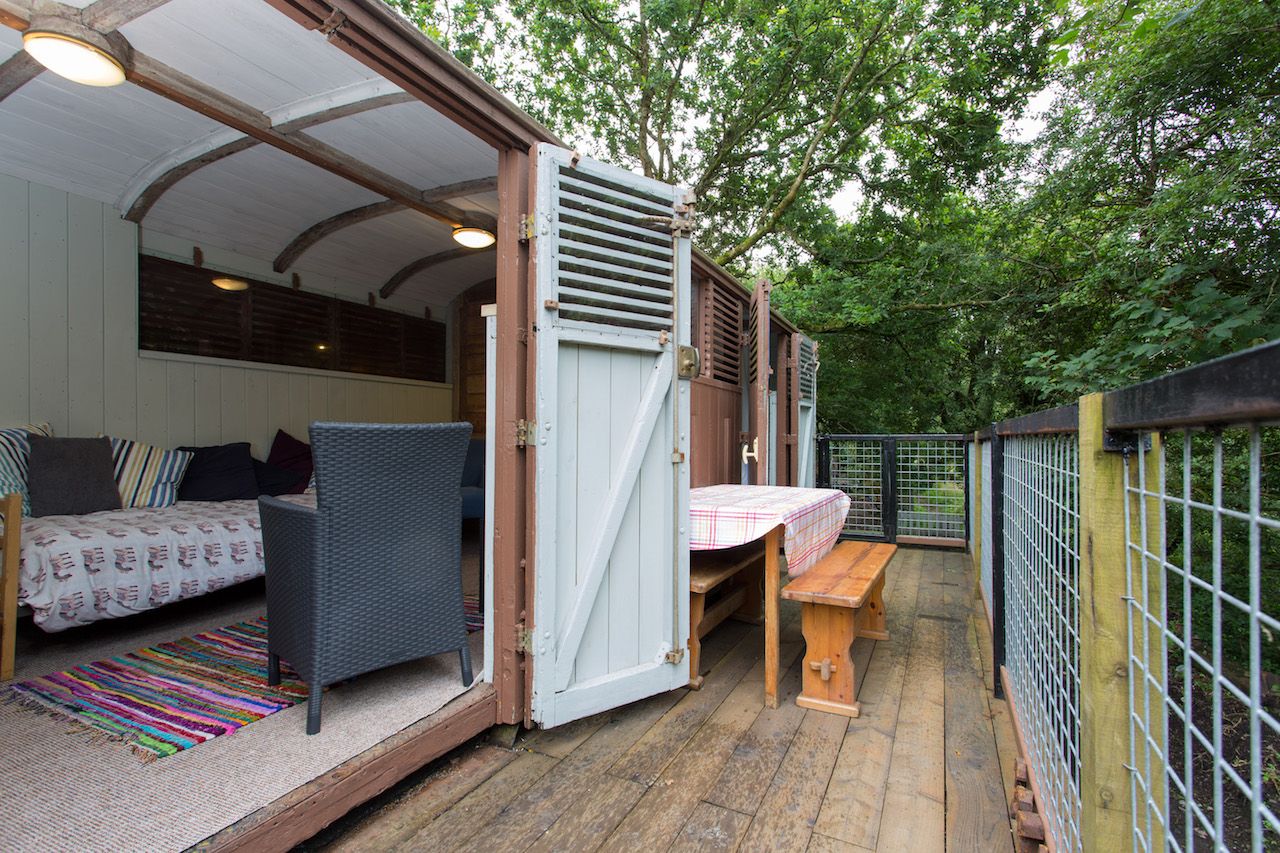 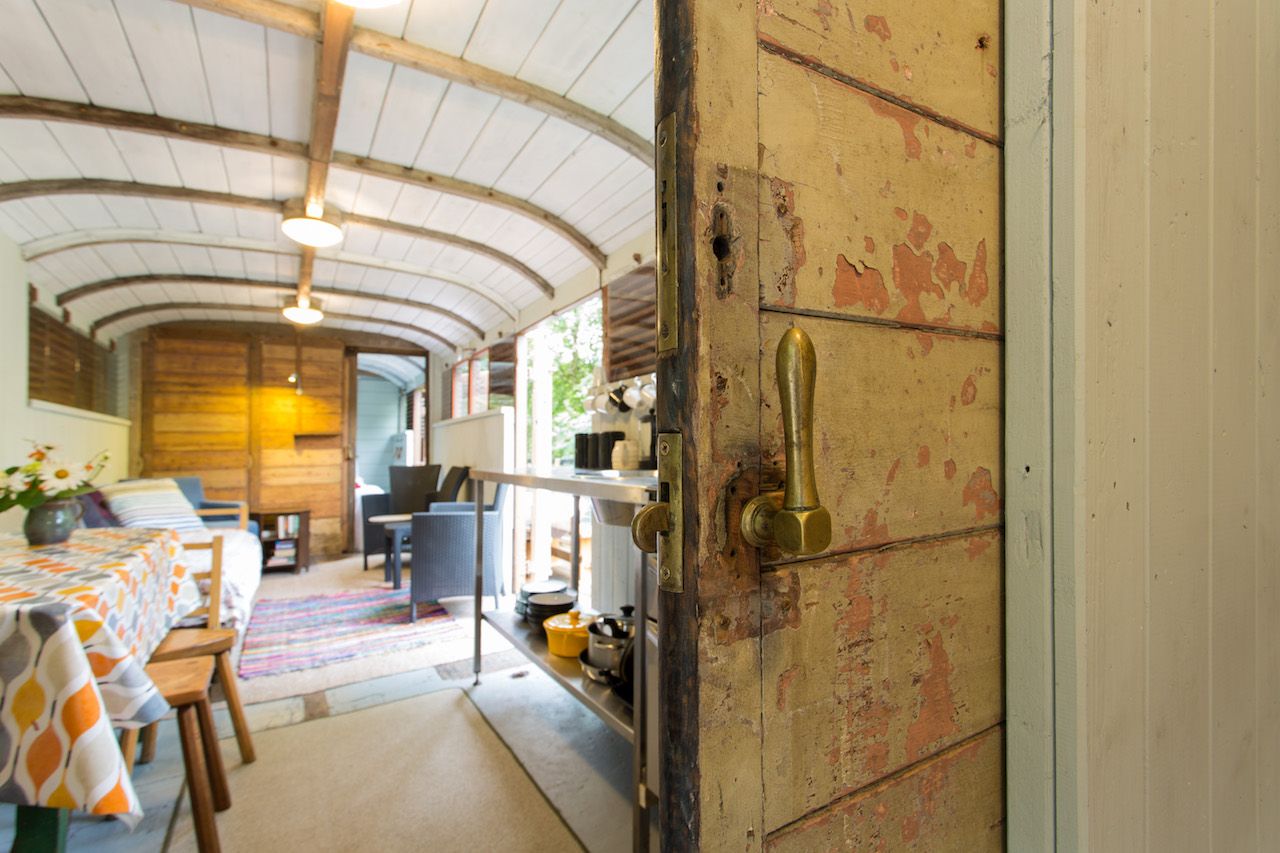 A little history lesson, for those not familiar with trains of the UK: One hundred or so years ago Siphon cars like this one were used to transport dairy from farms in the western part of the UK to London and surrounding cities. The 60-foot cars are for the most part extinct, save for this one set in the English countryside. It maintains its massively heavy doors while boasting a restored interior with plush beds and steel countertops. Though it offers three bedrooms, the Siphon also has a nearby brake car called The Toad, which sleeps two and still has the original sandboxes used for braking the train. The whole thing is solar powered and features a water-free exterior toilet, plus an outdoor shower. If you’re not hung up on mod-cons, it’s a historically fascinating place to stay. 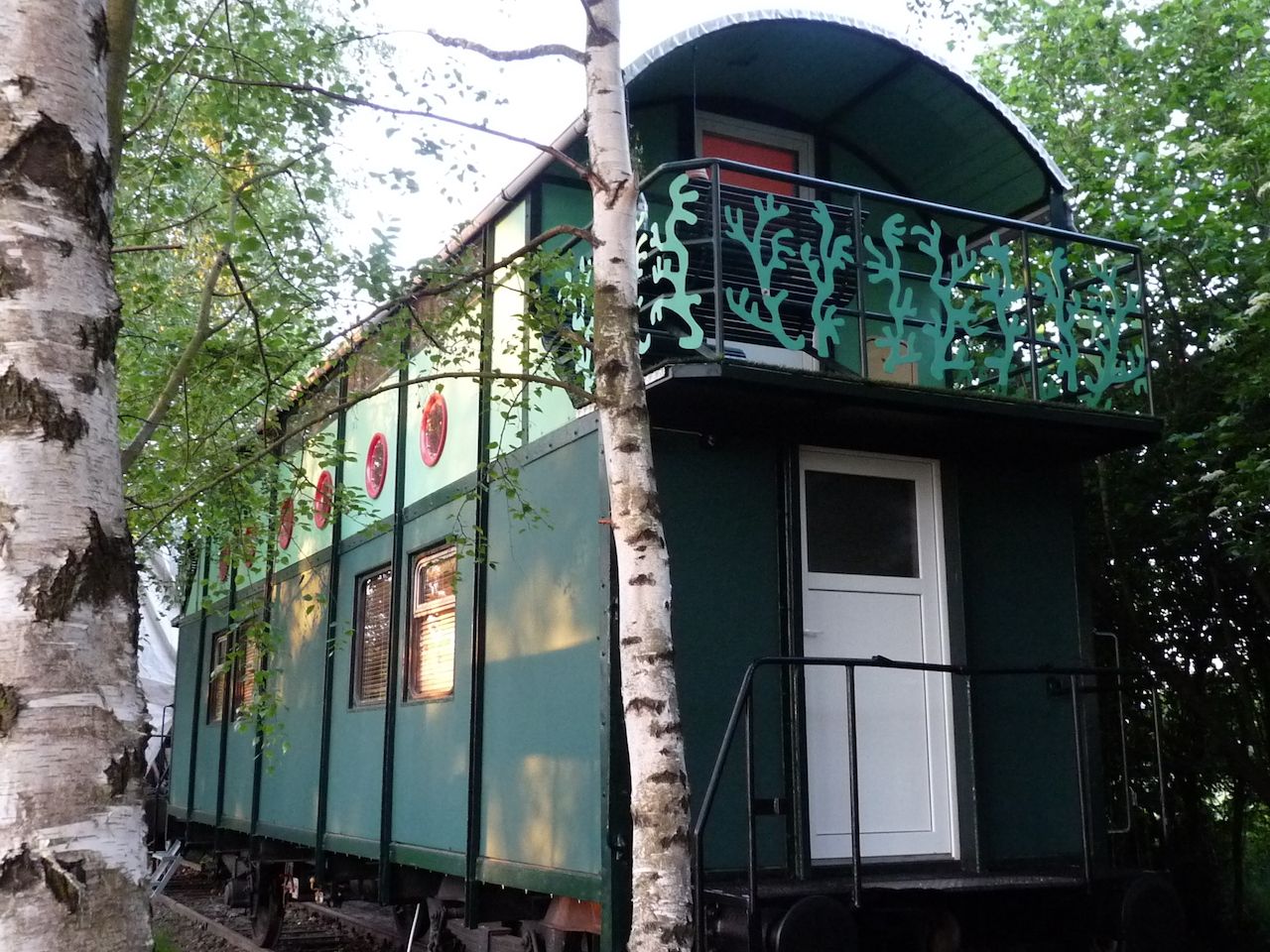 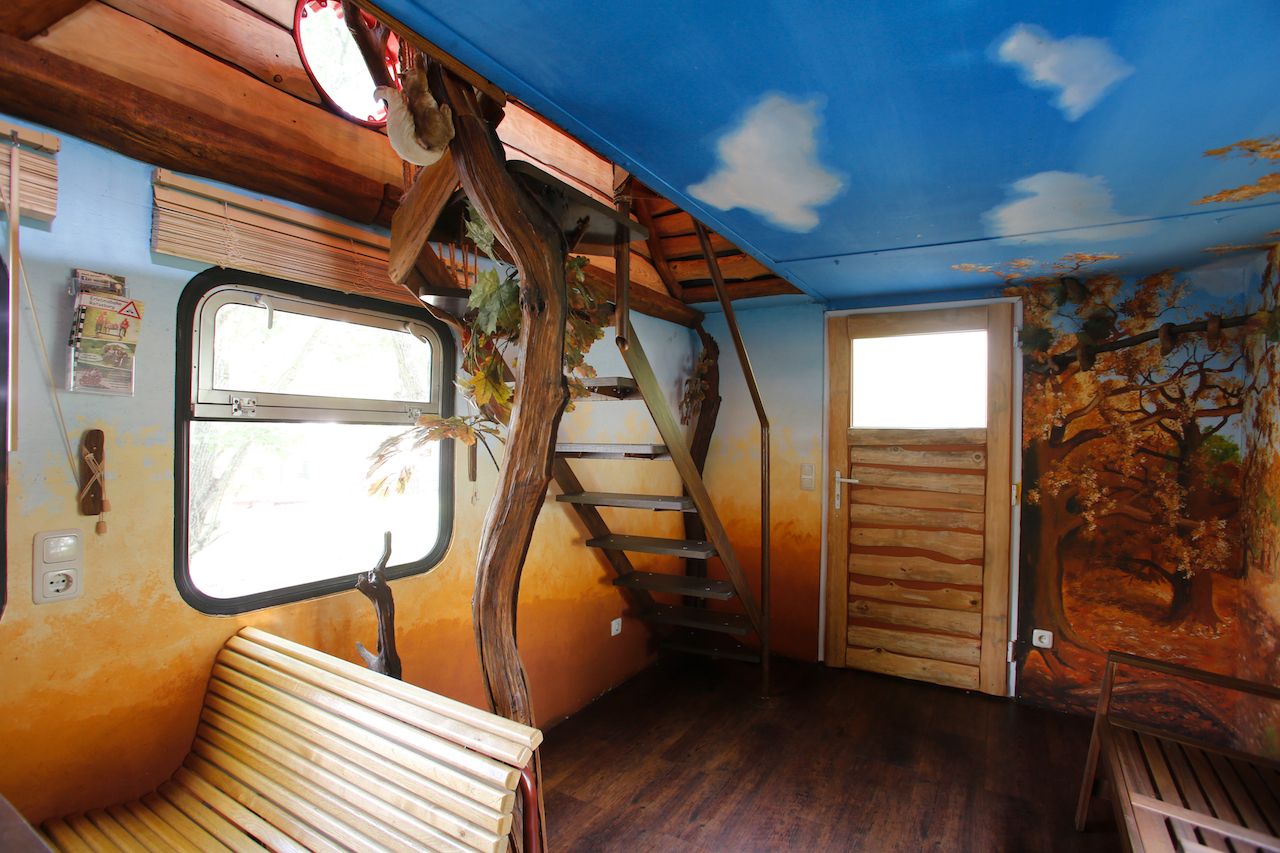 These trains feel a little like a storybook from the moment you walk onto the property and see the colorful, cartoonish cars to the time you step inside to see walls covered in fall murals. The two-story trains feature ground floors with tableaus of deciduous forest covering the walls and cozy attic bedrooms upstairs where you’ll sleep under an arc of wood. The upstairs bedrooms also have a private terrace where you can enjoy morning coffee. There is an on-premise hot tub, as well, if you’d rather enjoy said coffee surrounded by bubbling water.

NewsThe most popular travel destinations for 2019, according to Airbnb
Tagged
Where to Stay Trip Planning
What did you think of this story?
Meh
Good
Awesome