I am not what you would describe as a small person. Nor graceful. Bull in a china shop would probably be a more accurate description. I’ve knocked pictures off the wall by gesturing too much. I spill other fans’ beers at football games from excessive arm flailing. You get the idea. The word “tiny” just makes me think of dented walls and broken glasses. In Europe, I get claustrophobic.

So when I was invited to spend the night in a tiny house out in the middle of the Arizona desert, my first reaction wasn’t — like a number of people on my Instagram — “OMIGOD SO CUTE!!!” It was more along the lines of, “That just sounds like a lot of hitting my head.”

But with tiny houses becoming an alluring alternative for young people in cities with skyrocketing housing prices, this seemed like an excellent way to see if this minimalist lifestyle could actually be comfortable. Even if just for a couple days. 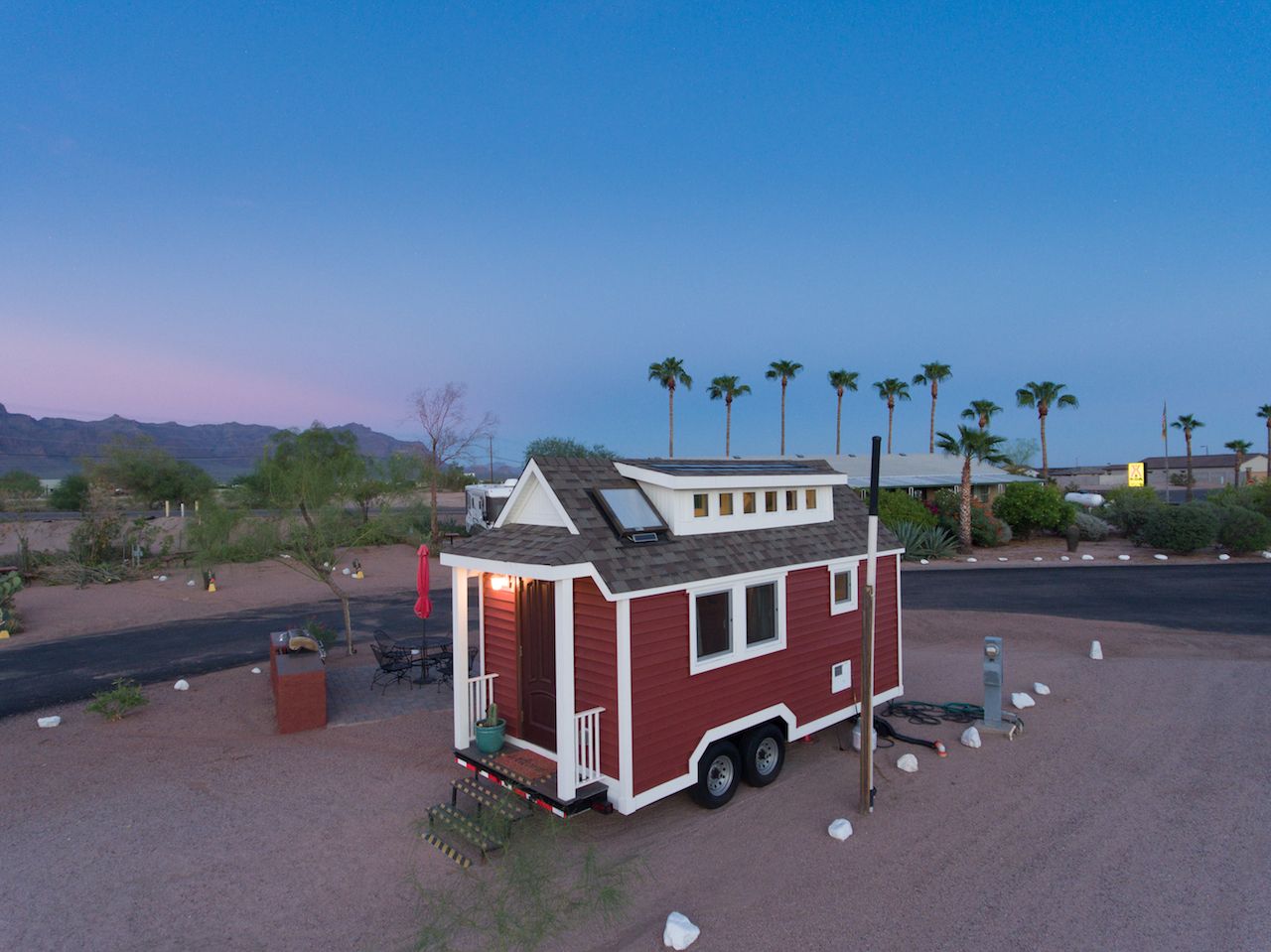 Tiny houses as hotels are a legitimate possibility.

Though no official figures exist on the numbers of people moving into homes under 500 square feet, nearly a third of people between 18 and 34 say they’d live in one, according to restoringsimple.com. And the massive popularity of the show Tiny House Nation demonstrated people have, at the very least, a healthy curiosity about them.

Of course, people may not be prepared to trade in their 2,500-square-foot suburban McMansions for a house the size of a large walk-in closet just yet. But tiny houses may change another industry in big ways, as well: lodging. As hotel rooms get smaller, scrapping amenities and catering to travelers who leave the room rather than relish in it, a tiny house makes sense as a small home away from home.

One company has already effectively become the first-ever tiny-house hotel. Getaway, a company that sends its guests out into the woods for a weekend of total disconnection, uses 128-square-foot cabins to help stressed city folks get back to nature. Though the company is unaffiliated with the house I stayed in, its concept of using small spaces for natural escapes seemed a lot like what I was doing.

Getaway began with only three tiny houses and now has eight outside New York, Boston, and Washington, DC. Staff says his houses are regularly 90 percent sold out, and they have a huge number of repeat customers. Clearly, there’s something about being in that small space that appeals to travelers. But is it for everyone? Namely oversized, clumsy people who regularly hit their head on kitchen cabinets? That, to paraphrase the Wizard of Oz, is a trailer of a different color. 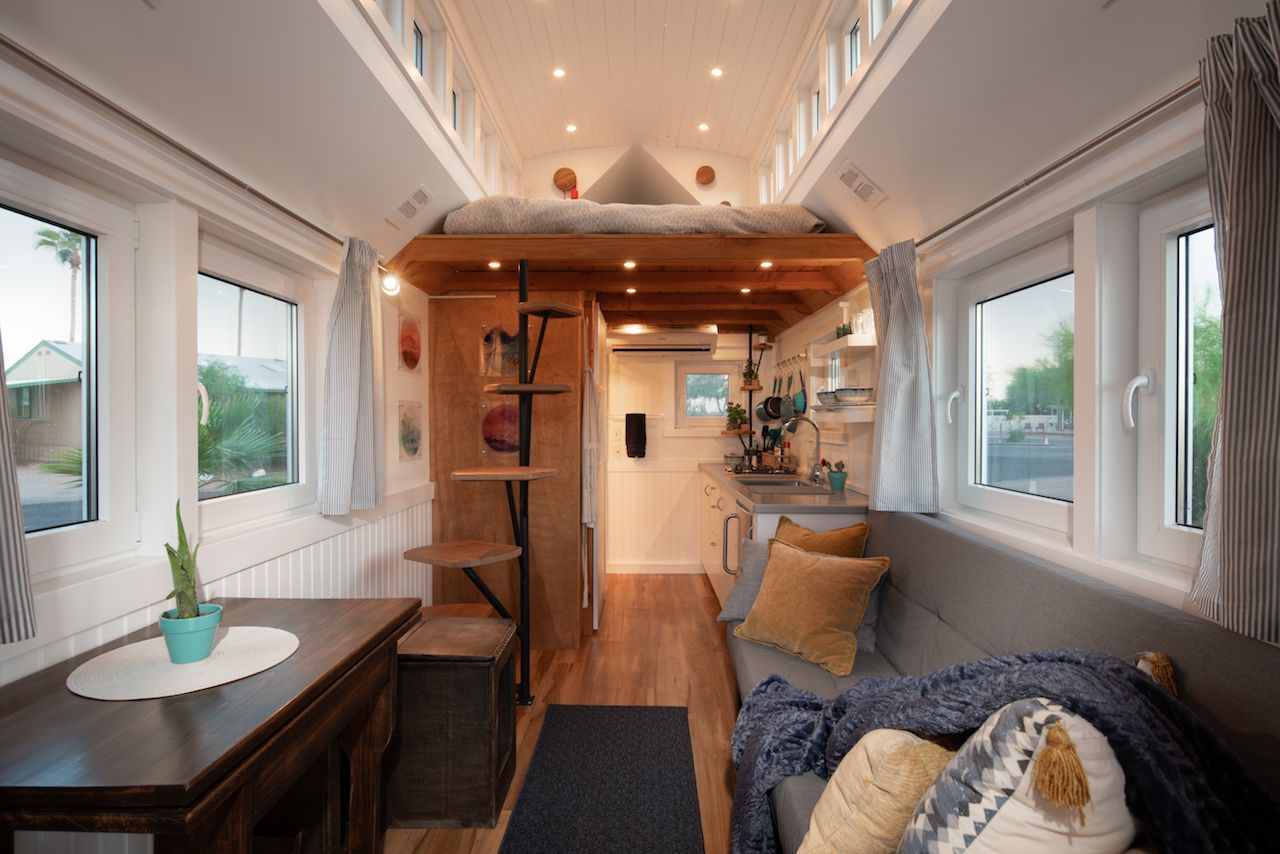 A night in a tiny house is easier than I’d thought.

The tiny house I was assigned to sat at a KOA campground in Apache Junction, Arizona, about 30 miles east of Phoenix and within driving distance of a Starbucks and an Orangetheory gym. So it wasn’t exactly an off-the-grid escape. It measured a spacious 170 square feet, 13.5 feet tall and 8.5 feet wide. Laying horizontal across it, I couldn’t stretch my arms completely above my head.

Zac Giffin on Tiny House Nation designed the space, in conjunction with Plastics Make It Possible, an organization aimed at promoting plastics as eco-friendly building alternatives. The house was constructed using stuff like polyurethane foam insulation, vinyl windows, and a polycarbonate skylight, with the idea of keeping a year’s energy cost around $180. Even when using air conditioning in the brutal Arizona heat.

It was a pretty simple setup with a small walkway leading into a living room comprised of a stiff couch set against one wall, a table, and backless benches against the other. Beyond that was the kitchen and bathroom, set on opposite sides of the house. The kitchen had a two burner stove and a sink, set above a mini fridge with pots hung on the wall and plates and glasses set on shelves next to it. The bathroom was a narrow room with a shower head on the ceiling and a toilet against the wall. Atop the toilet, where the tank lid might usually be, was a sink.

“The toilet fills with the wastewater from the sink,” my tiny house guide cheerily pointed out. I was wondering how I was supposed to brush my teeth with two gallons of water to get the thing to flush.

Above the kitchen and bathroom was the sleeping loft, a classier version of the frat-house variety constructed to allow more space for beer pong. It was about seven feet high, which meant if I got a little too excited chopping onions in the kitchen I’d smack my head on the ceiling. 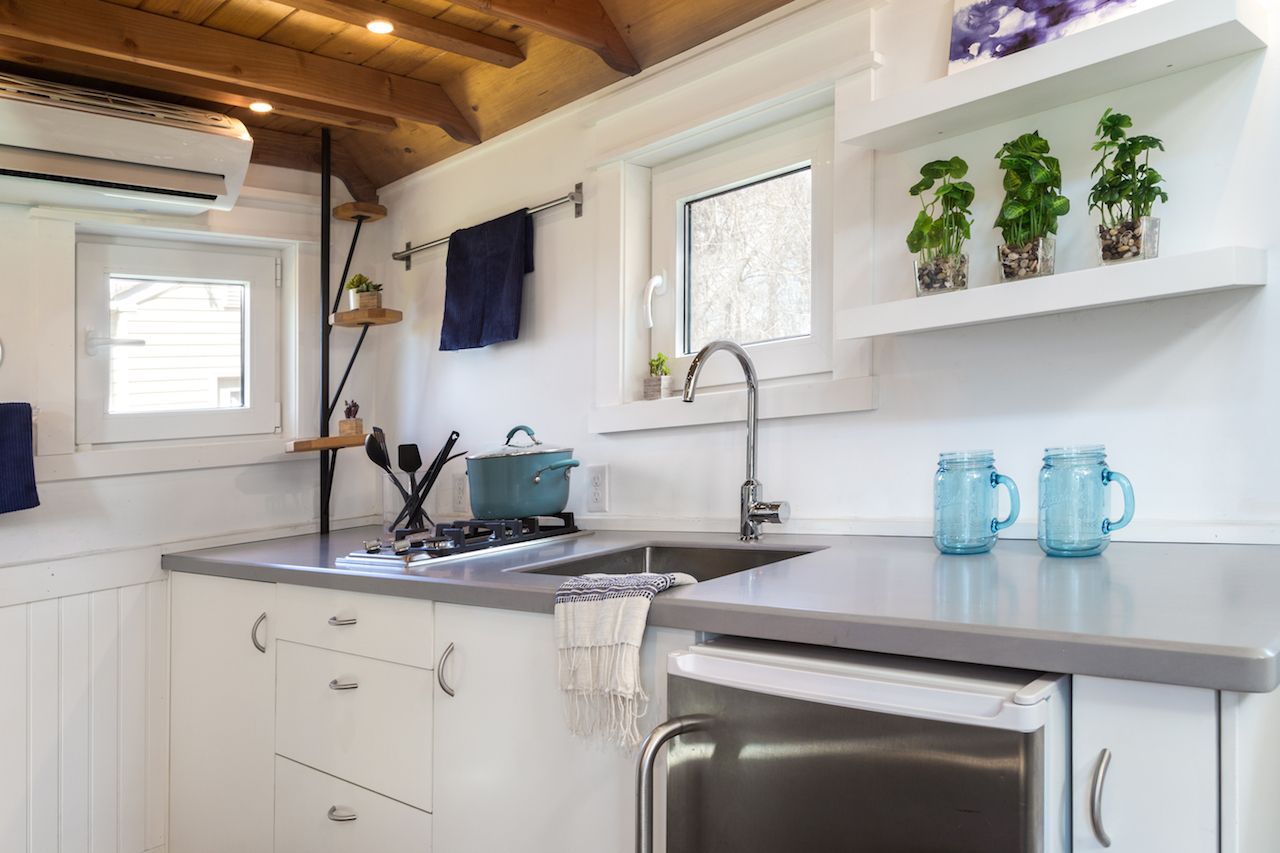 Cooking in a tiny kitchen forces you to adapt.

If tiny houses were truly meant to be back-to-nature escapes, I reasoned a person would need to be able to cook in them. So I attempted to make an authentic southwestern dinner of tacos with fresh pico de gallo. Typically, when I have to chop anything more complicated than an orange, roughly 10 percent of whatever I’m cutting ends up on the floor. With counter space at a premium in the tiny house, I fully expected the vinyl plastic floors to look a little like the Tijuana Flats salsa bar by the time I was done.

I was also a little confused as to how I’d make rice, beans, meat, and warm tortillas with two burners and no microwave.

Because the counters were so small, I was forced to put things in bowls as they were chopped instead of leaving them on the tiny cutting board. Which meant that while a few specks of cilantro fell to the floor, the pico-making process was far cleaner than it was at home. To manage the burners, I boiled the beans while cooking the meat. When the meat was done, I removed it and cooked the rice, then took the beans off to warm the tortillas. Tiny-house tacos took a little more thought than usual but may have come out even better than they would have in a bigger space. 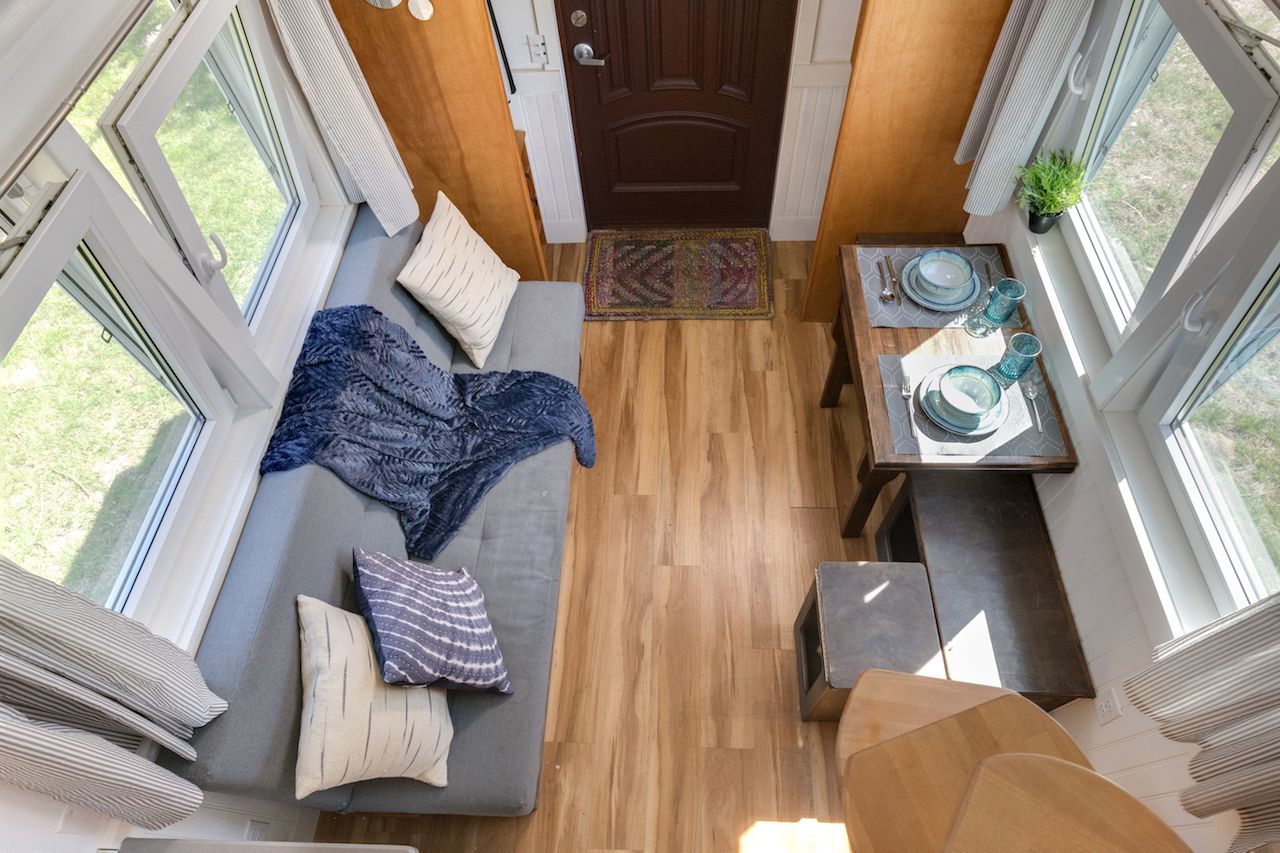 The living room table, which doubled as the office space, worked well for one person. The wooden benches were still a comfortable distance from the table, and when I set up my laptop to enjoy a little Santa Clarita Diet with my dinner, I was able to put my laptop screen a comfortable distance away. Eating on the couch wasn’t really happening, though, since there wasn’t exactly room for a sprawling coffee table. 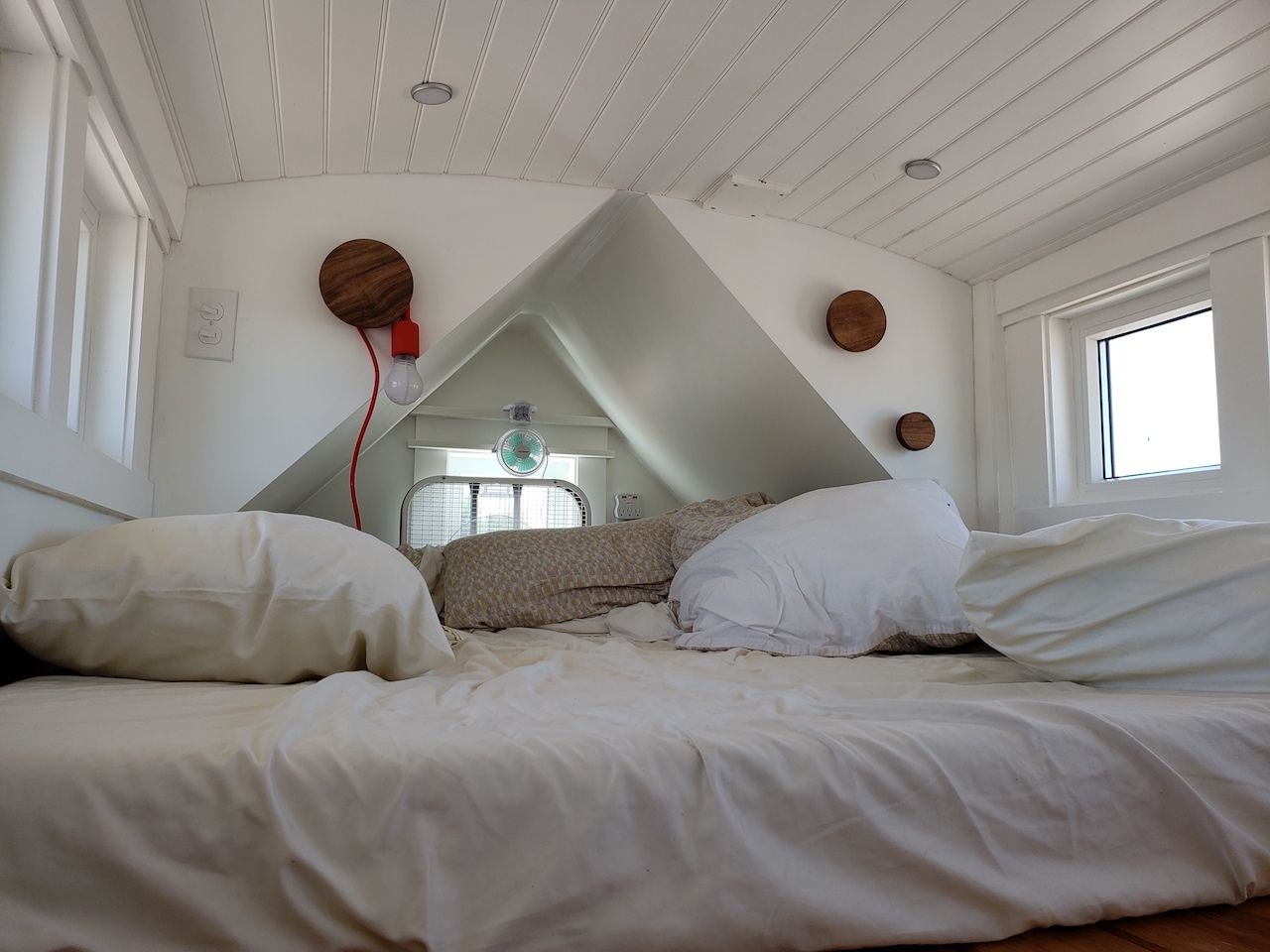 Sleeping as a tall person is a challenge.

After dinner, I ascended the floating stairs for bed, and immediately upon stepping on the top step hit my head on the ceiling. I laid down with my feet facing the living room and my head on the far wall, which was fine except for the massive fan behind my head placed there to keep the elevated space cool.

My choices were to either leave on the roaring fan or sleep through the heat. I spent the entire night switching back and forth between both, drinking about a gallon of water and hitting my head about half a dozen times. 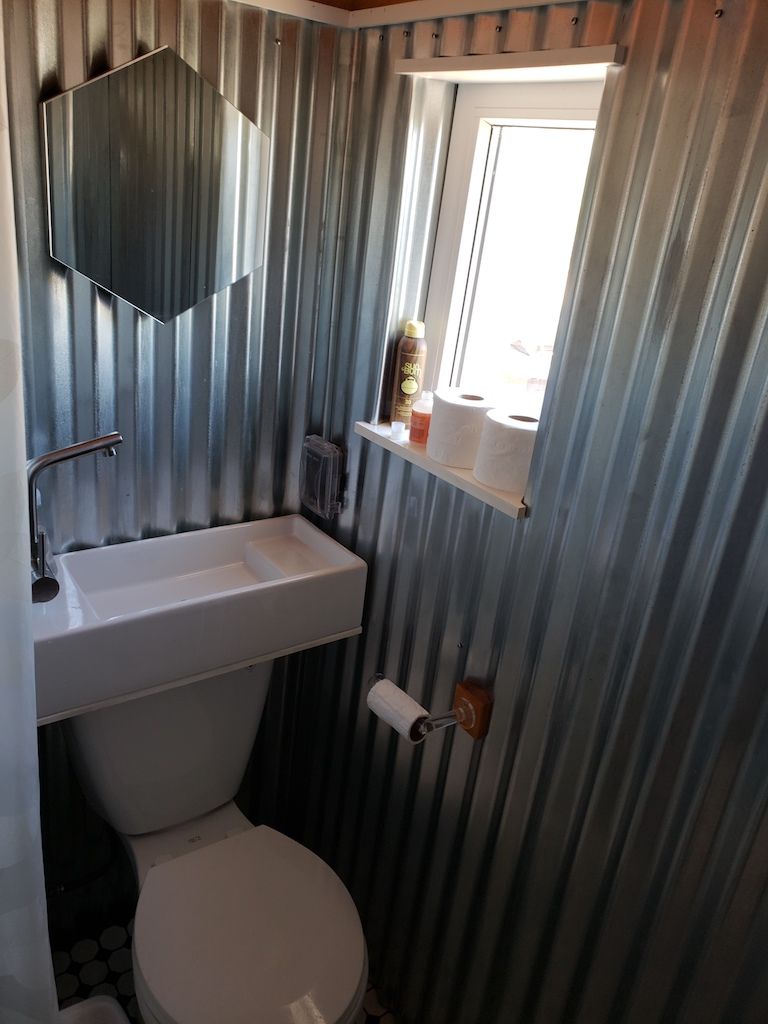 Using the bathroom isn’t as awkward as you’d think.

Despite the lumps on my head, I woke up the next morning and made coffee using the French press sitting on the tiny counter, boiling water on one of the two burners. While it boiled, I went into the bathroom to brush my teeth, leaning over the toilet the entire time so my head was over the sink. This was slightly awkward but perhaps the one time being tall was advantageous in the tiny house — though I definitely spilled a fair amount of toothpaste on the floor. Good thing it also doubled as the shower drain.

After coffee, I ventured out to the nearby Orangetheory and returned to test out the shower. The head was one of those overhead rain showers, popular in boutique hotels but a bit like bathing in a monsoon. The water pressure in the tiny house might have been the biggest thing about it, and with a faucet handle right next to the toilet, it actually provided JUST enough room to stand outside the water while you waited for it to get warm.

Aside from showering right in front of the bathroom window, it was one of the better hotel showers I’ve experienced. I hope the good people of the KOA campground enjoyed their show. 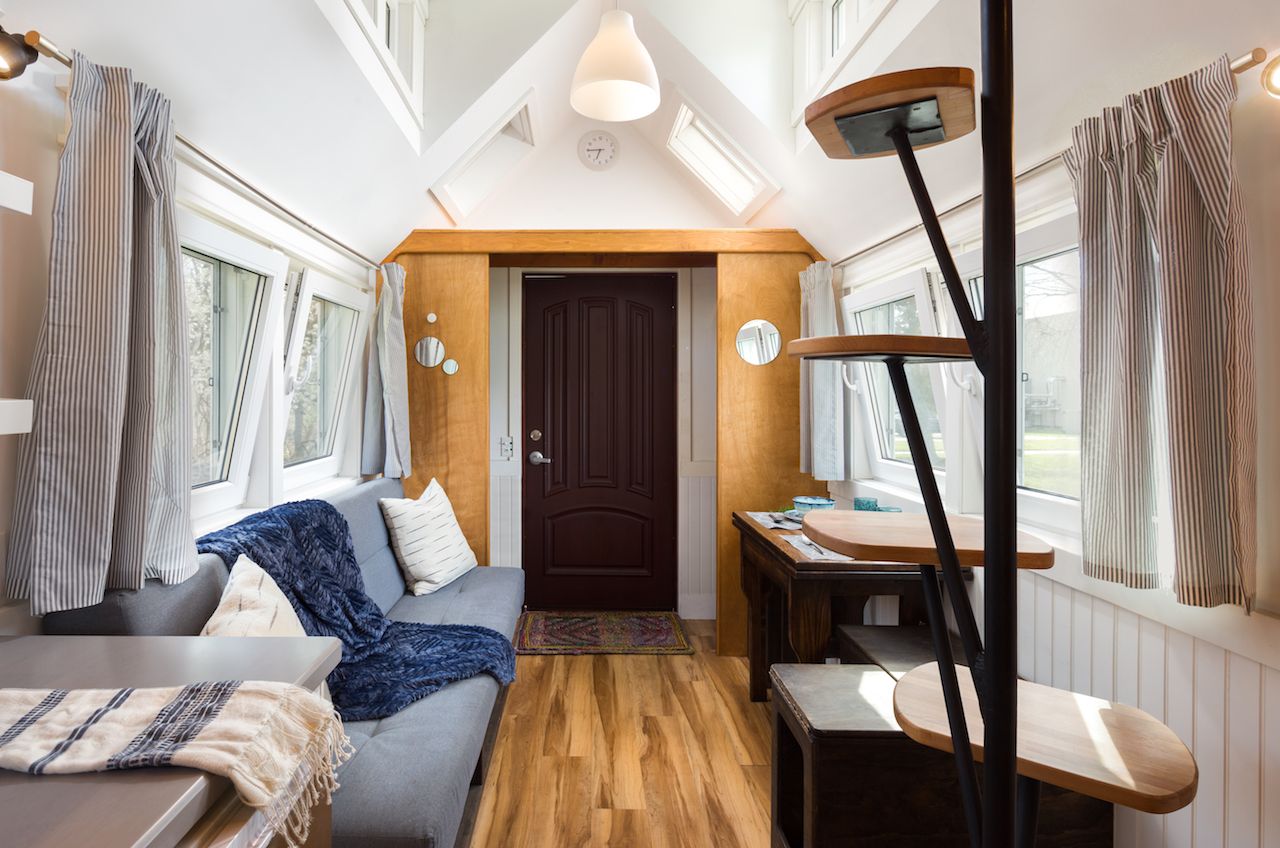 Cleaning the house is an absolute dream.

Before leaving my tiny house, I thought I should clean up a little of the dinner mess I made the night before. And that, friends, is perhaps the best thing about living in a small space: There’s almost nothing to clean. I ran a Dustbuster across the kitchen floor, wiped it with a sponge and my used bath towel, and wiped down all the counters. It might have taken 10 minutes in total.

With less space also came less aggravation and an increased sense of resourceful creativity. The tiny house challenged me to find new ways to do things, which for some people is part of the point of travel. Parts of it were uncomfortable, and it wasn’t a perfect duplication of a big space, but even for a large person, a tiny house can make for a nice getaway. And — theoretically, anyway — a cheaper way to live. As long as you remember to watch your head.

NewsCanadian Company Makes Tiny Homes That You Can Assemble Anywhere
Tagged
Epic Stays
What did you think of this story?
Meh
Good
Awesome