There are a painful number of clichés about “home.” Home is where the heart is. Home is where your stuff is. You can never go home again. I’ve never found any of them to be particularly true.

Home, I think, is where your memories are. The highly filtered memories of an easier, simpler time you wish you could go back to when adult life seems just a little too…adult. Home isn’t necessarily a place, but an era. And is as much the people who surrounded you and the things you did than anything tangible.

When you’re a kid, sports are the constant of home. They were your biggest concern in a time where you didn’t have many, and the guys you watched on TV were the best friends you never got to meet. Baseball, more than any other sport, is the official sport of “home.” It’s what your dad had on the TV every night from April to October, and what was on the radio when he picked you up from practice or a friend’s house. It has a pace and a conversation that makes for the perfect perpetual backdrop. Baseball was what was going on in the background while life happened.

For me, home was sunny summer days in Northeast Seattle, listening to the hapless Mariners on the radio while cruising around in my friend Dan’s shitty Chevy Corsica. It was watching games in our friend Joe’s basement and on the TV in the neighborhood pizza joint where I worked. And going to the nearly empty Kingdome with our parents to see Ken Griffey Jr. and Edgar Martinez do their best to help a terrible team.

Then in 1995, just when we were getting drivers’ licenses and discovering girls, another crazy thing happened: The Mariners actually started winning. And all of a sudden all that mattered in life was baseball.

Dan and I weren’t best friends, really, but we were baseball friends. And though neither of us was going to be the best man at the other guy’s wedding, we also realized we’d remember that Mariners run a lot more than we’d remember anything we learned in school.

So we took a page from Zack Morris’ book and skipped on Rosh Hashanah to see a crucial day game against Oakland. We told teachers we were attending services at Temple Beth Kingdome.

We skipped the whole day for a one-game playoff against the California Angels. The next day our fifth-period chemistry teacher asked if we had excuse notes. We handed him our ticket stubs and he said, “That’ll work.”

The year’s ultimate moment was a two-run double hit by Edgar Martinez to beat the villain of all villains — the New York Yankees — in a playoff series. It’s still the most iconic moment in Seattle sports history, Super Bowls and all.

So when Martinez — the guy who hit that ball, and the greatest designated hitter in history — finally got the call to the Baseball Hall of Fame in Cooperstown, we knew we had to skip life for a few days to see it. 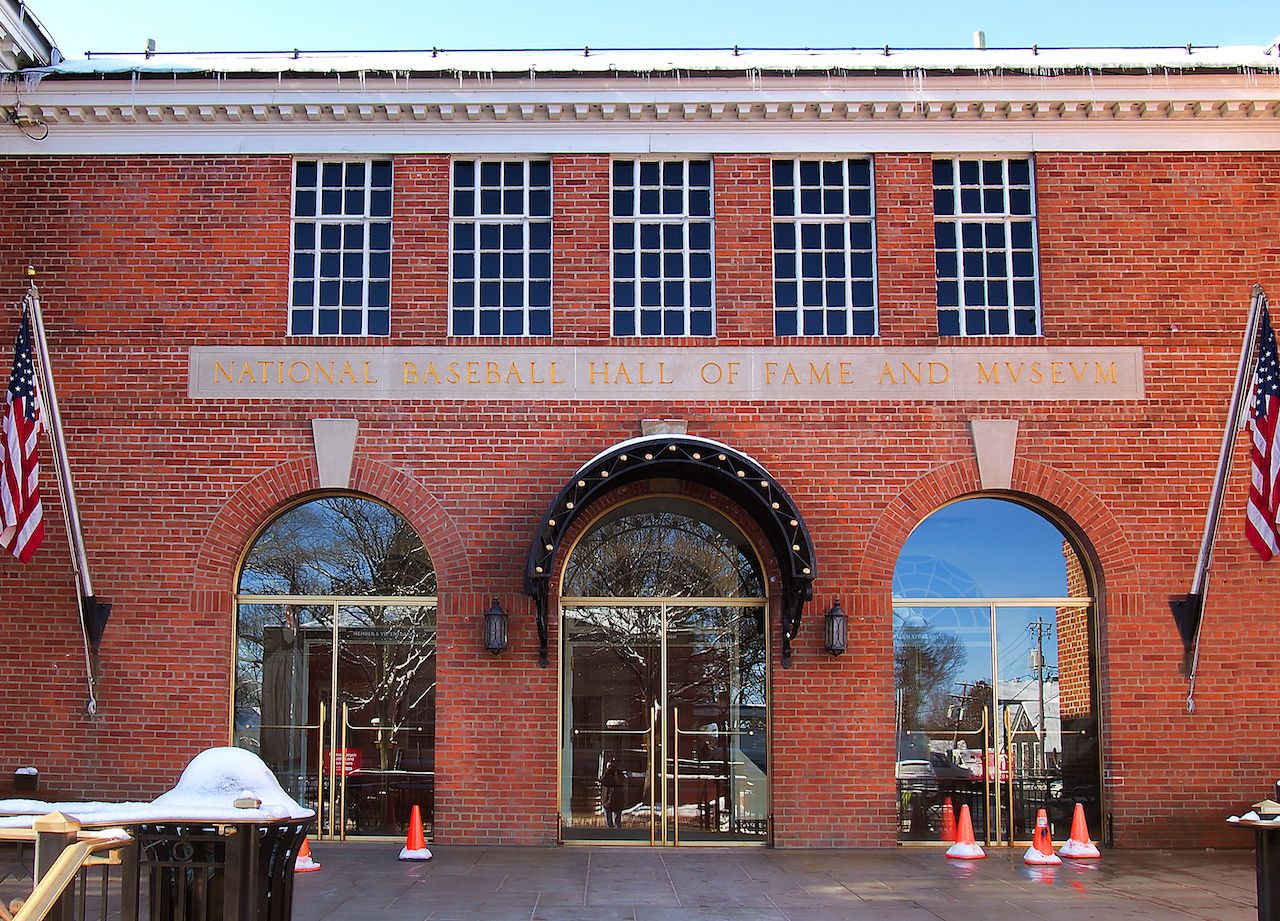 Cooperstown is an odd little place. It’s a village of just over 1,500 people that looks like any charming small town in America. Except instead of bars, restaurants, and law offices on its main street, it has the Baseball Hall of Fame and about 700 memorabilia shops.

It’s nestled in the Adirondacks, surrounded by stunning green hills along a deep blue lake. On a bright summer day, it didn’t look too different from Seattle.

During induction weekend, the shops along Main Street are your childhood baseball card collection come to life. Ozzie Smith is signing autographs in one store, Cal Ripken in the next. Wade Boggs in another. Everyone you knew only from a wax-covered piece of cardboard is there in the flesh, shaking hands and breathing the same air.

“It’s so boring,” they’ll say, the nuance of a 2-2 curveball and a drag bunt lost on them to bone-jarring hits and three-pointers. “It’s so slow, I fall asleep. I like to just go to games and drink.”

And that kills a baseball person a little bit every time we hear it. But in Cooperstown, that spirit is revived. For baseball people, Cooperstown feels like home in the same way burners talk about being “home” at Burning Man. It’s where your people are, and where every corner of every street speaks to a part of you many people don’t understand.

The day before the induction, the Hall of Fame hosted a roundtable of Mariners greats at Doubleday Field, where Ken Griffey Jr., Jay Buhner, and other guys we grew up idolizing were dressed down and talking baseball.

“That’s Griffey!” Dan said with the same excitement he might have if we’d run into him at a traffic light in 1995. In a previous life, Dan was a sportscaster and had become immune to the novelty of meeting famous athletes. But something about Cooperstown strips that all away.

“Really?” I said as we stood about six feet from Seattle’s ultimate sports hero. “Man, he got fat.”

It didn’t matter. Heroes are heroes no matter how much weight they gain.

The stands were packed with a thousand or so Mariners fans decked out in Edgar Martinez jersey shirts. Two thousand miles from Seattle, we were all sharing the same memories together with the guys who made them possible.

Reliving a common past with total strangers 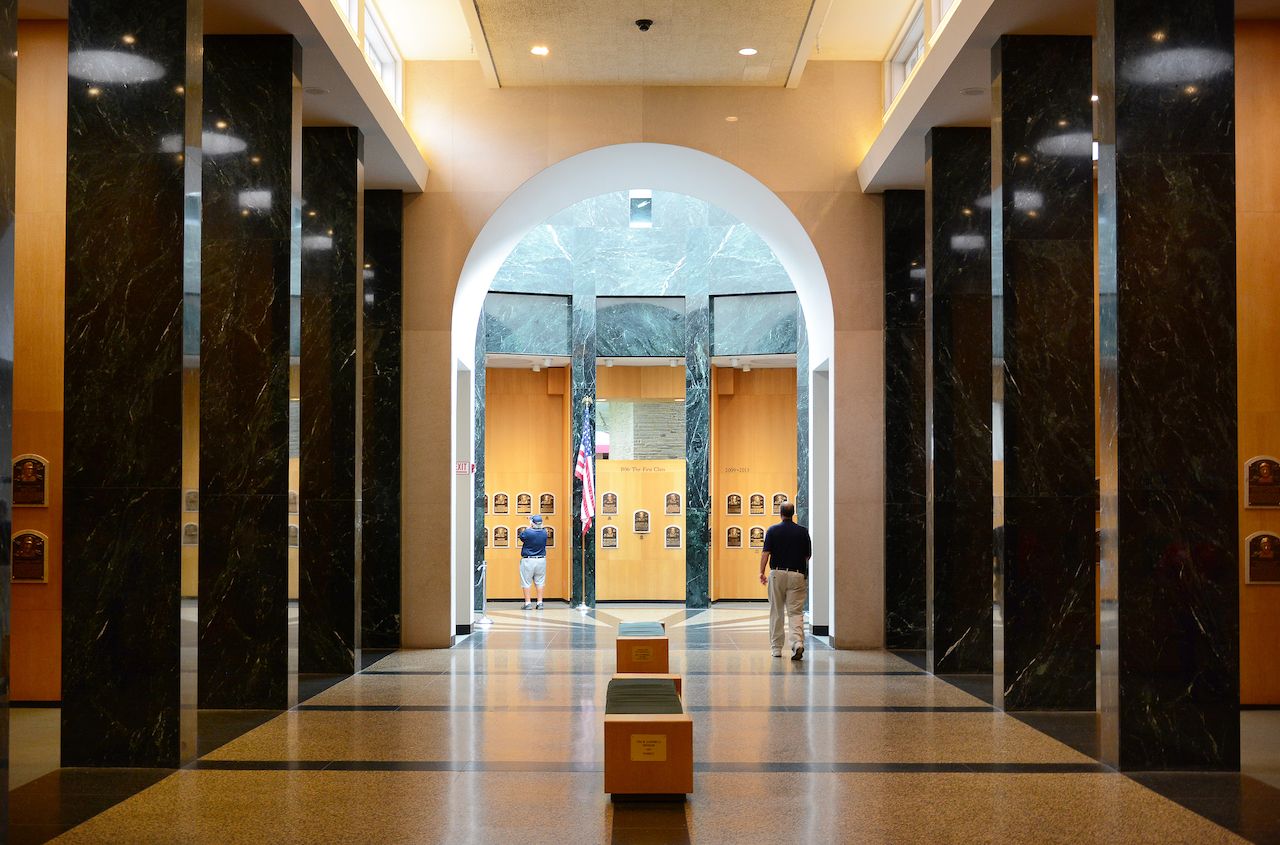 The induction ceremony felt like the last scene in a movie about the ‘95 Mariners. Randy Johnson and Ken Griffey Jr. sat onstage while Edgar Martinez was inducted into the Hall of Fame. It was the flash-forward from those simpler days in the Kingdome, with grown-up fans watching their heroes and remembering what it was like to be kids.

We talked about baseball and told old Mariners stories with people we’d never met, forgetting about anything else except maybe where to get our next beer. Dan checked in with his wife a few times a day, but other than that we were as free as we’d been in the ‘90s and it felt good to immerse ourselves in a glorious past.

As we did after so many classic Mariners games, Dan and I drove back from the ceremony blasting Snoop Dogg at ill-advised volumes and driving faster than we probably should’ve. As the sun set over the Adirondacks, for that brief moment we were carefree teenagers again, celebrating a sports victory from the front seat of a shitty car to a ‘90s rap soundtrack.

Neither of us can ever go home again. His parents sold their house and moved close to him in Charlotte. My parents are both long gone and I live as far from Seattle as you can get. The Kingdome was imploded 20 years ago, and Seattle is barely recognizable from what it was in the heyday of Edgar Martinez.

But for one weekend, we came close. And even though it was in a little town in upstate New York, it felt like those Seattle summers when life revolved around baseball. Responsibility slipped away and the simple life roared back for a few magical days, proving that in the right state of mind, you really can go home again.

NewsManhattan Is Getting a Beach and It Will Look Like a Little Corner of Paradise
Tagged
Entertainment Museums Narrative
What did you think of this story?
Meh
Good
Awesome