Rum can be many things. To some, it’s a clear and nearly tasteless spirit best used in cocktails. To others, it’s deep, intense, and should be sipped and savored, not shot or mixed. Others still think of a liquor that’s spiced, sweetened, or both. When it comes to rum, the styles and flavors are as varied as the many places that make it.

Many of the most famous rums in the world are made in the Caribbean. Sugarcane was introduced to that part of the globe in the late 1400s by Europeans, and it quickly took root. Colonialists started sugar plantations that used forced labor from enslaved people from Africa, and from these sugar plantations came rum.

A few islands and countries in Central and South America became famous for rum, while others remain relatively obscure without a truly defined style. The latter aren’t bad (Paranubes from Mexico, for example, is always worth sipping), but the most well-known rum producing regions reliably put out distinctive spirits that taste of the place they’re made.

The most notable rums are generally split into three styles: Spanish, English, and French. The first two are typically made from the molasses leftover from refining sugar, with English rums known for long fermentation times and funky notes and Spanish rums known for quicker fermentations and a more neutral taste. French style rums (or rhum agricole) commonly use fresh pressed sugarcane juice that results in a vegetal spirit that’s heavily influenced by the terroir of where the sugarcane was grown.

There’s a wide world of rum to sample using these three broad stroke styles as a jumping off point. These are the countries to sample rums from in order to understand all that the spirit can be. 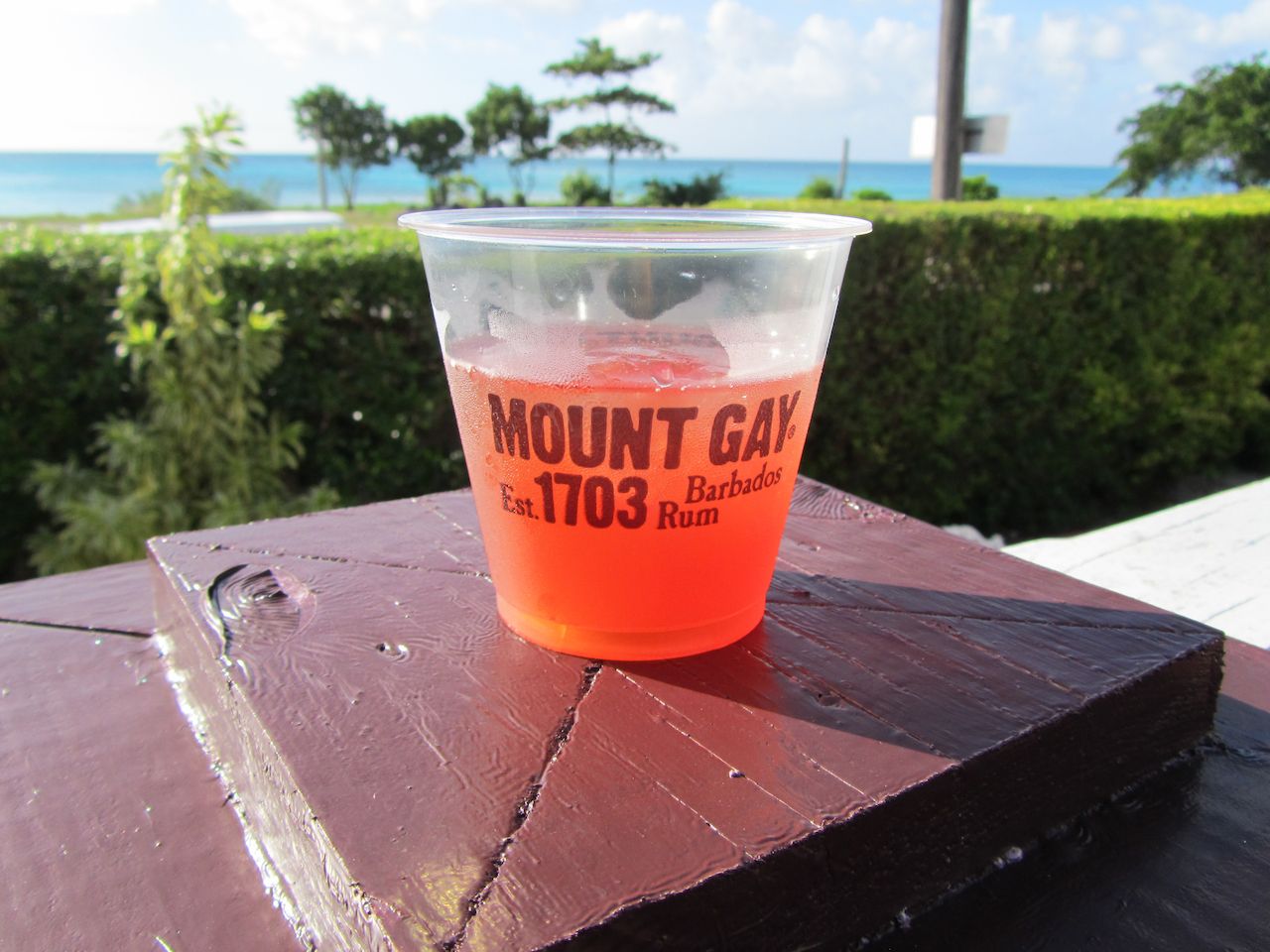 According to the most popular rum origin theory, Barbados is the original home of the spirit. Enslaved people were likely the first to ferment and then distill molasses to produce what would become known as rum. Rum has been distilled since at least the 1640s in Barbados by some accounts, and Mount Gay, which opened in 1703, is believed to be the first rum distillery. The spirit took off among islanders and the ever-present British Navy throughout the era of English colonial rule. Barbados was a prominent place on one corner of what’s known as the triangle trade of enslaved people, molasses, and rum during this time. Today, the island country maintains a strong connection to rum.

Rums from Barbados are known for being a perfectly balanced blend of pot and column distilled spirits that are aged to highlight both the flavors from the barrel and those from the sugarcane itself.

Rums to try: The Real McCoy 5 Year, anything from Foursquare Rum Distillery, and Mount Gay XO 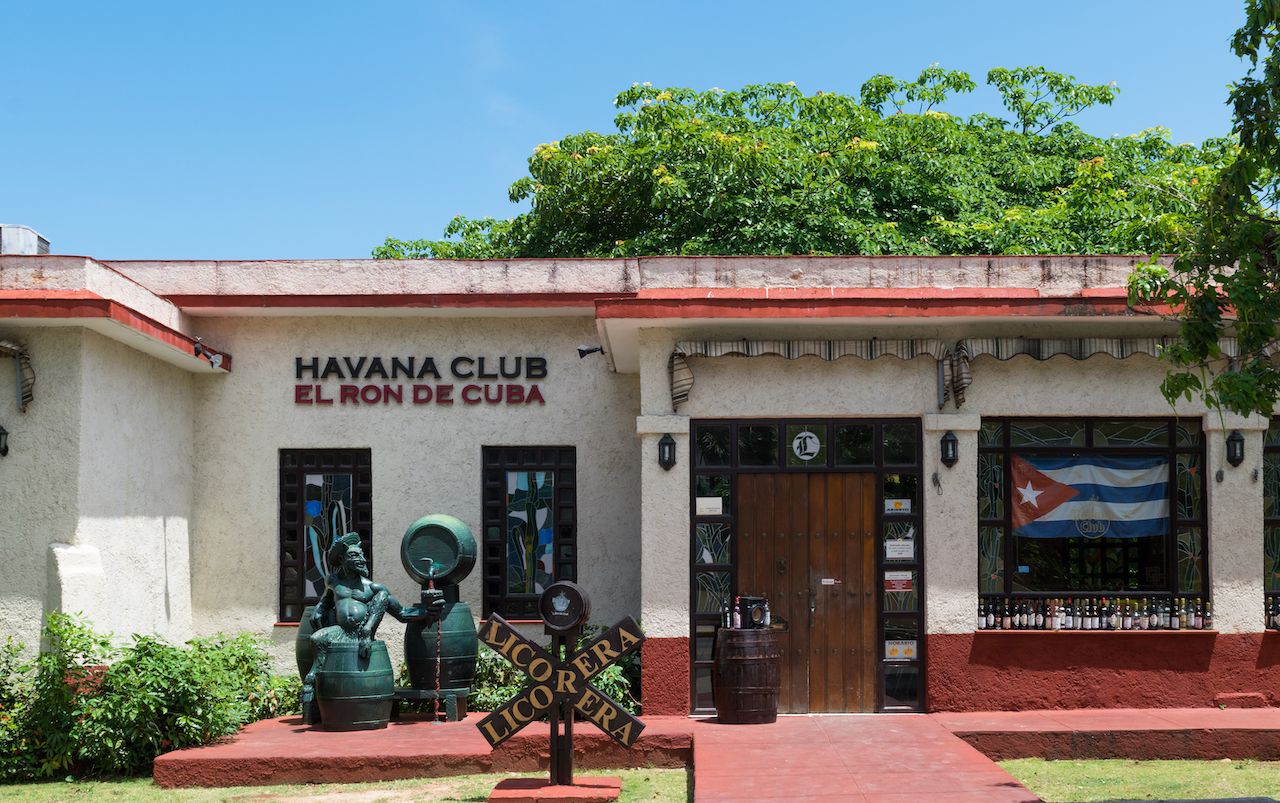 Few countries are as famous for rum as Cuba. During Prohibition, the island was one of the most popular escapes for thirsty Americans. Imported Cuban rum continued to be popular in the United States up until Cold War trade restrictions in the 1960s. Unfortunately, those strict stateside limitations largely continue today, though Cuban rum is easy to find abroad.

Cuban rums are typically made from molasses from sugarcane grown on the island. The distilleries make Spanish style rum that’s dry and aged for at least two years in oak barrels before being charcoal filtered. The result are light, easy drinking white rums that seamlessly blend into cocktails like the daiquiris that Ernest Hemingway made so famous, as well as longer aged rums ideal for sipping neat or over a single ice cube. 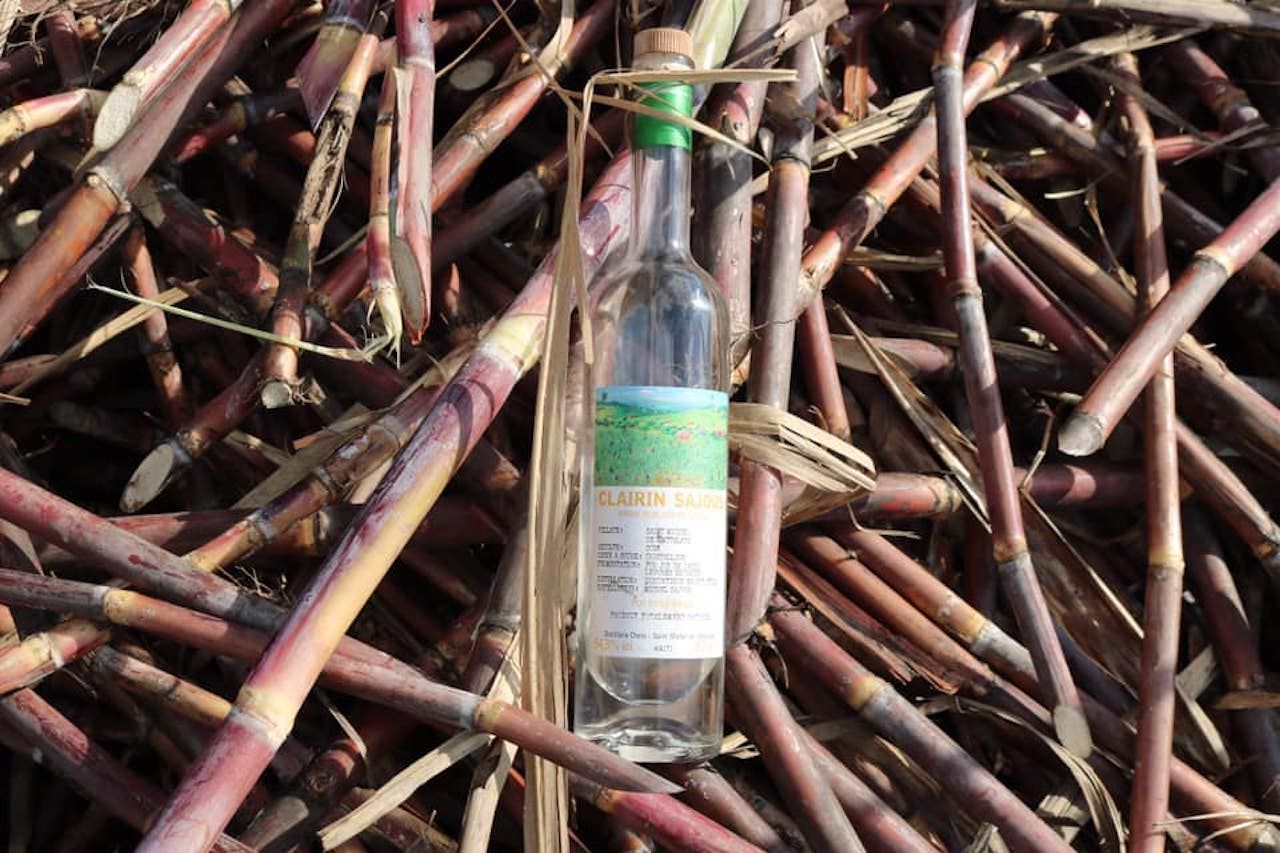 Photo: Clairin The Spirit of Haiti/Facebook

Haitian rum is far from commercial. Rum production here started with French colonization when Haiti grew a large chunk of the sugar consumed in Europe. Haiti became independent in 1804, and large sugar plantations were destroyed. Small local farms continued to grow sugarcane and distill at home, however, and today, more than 500 small producers are scattered across the country, each using various local varieties of sugarcane that’s grown and harvested naturally before being distilled in small pot stills. These distinct sugarcane spirits are called clairin, and can be hard to find outside of Haiti.

The diverse range of sugarcane is pressed and the fresh sugarcane juice is fermented with wild yeast. This gives each clairin a local flavor, or terroir, that’s unlike any other rum in the world. 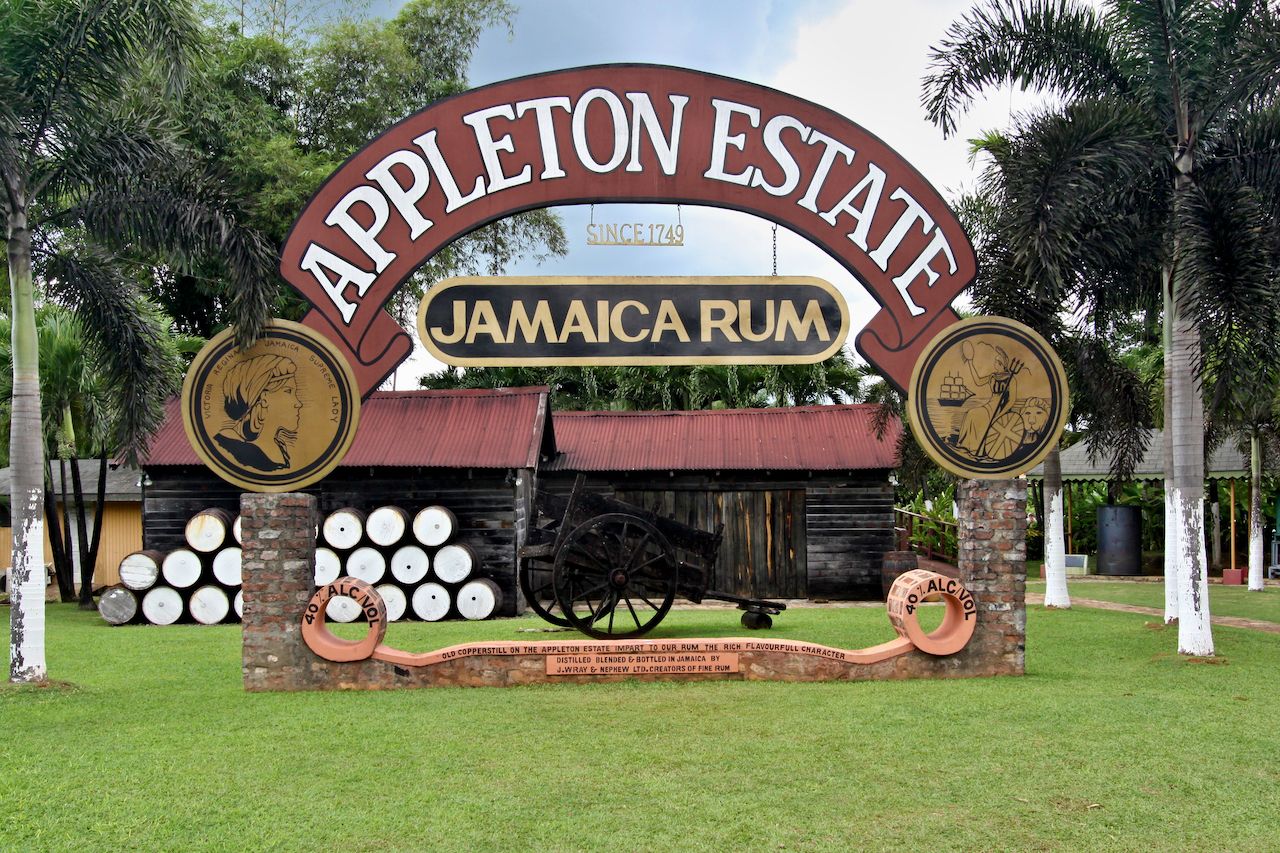 Jamaica is one of the most famous rum producing countries in the world. In the early 1900s, there were nearly 150 distilleries here, but today only four are in full operation: Appleton Estate, Hampden Estate, Worth Park Estate, and National Rums of Jamaica. Still, rum experiences are some of the most exciting things to do on the island for lovers of fine food and fine drink — especially at Appleton Estate high in the mountains.

Jamaican rum is characterized by what’s called “hogo,” which is a funky flavor that’s similar to overripe fruit in the best way possible. It comes from letting the molasses naturally ferment with wild yeast or dunder (the alcohol equivalent of a sourdough starter) and then distilling the liquid in pot stills rather than column stills. Many Jamaican rums are higher than the standard 40 percent ABV, making them great for rum-forward cocktails or sipping over ice. 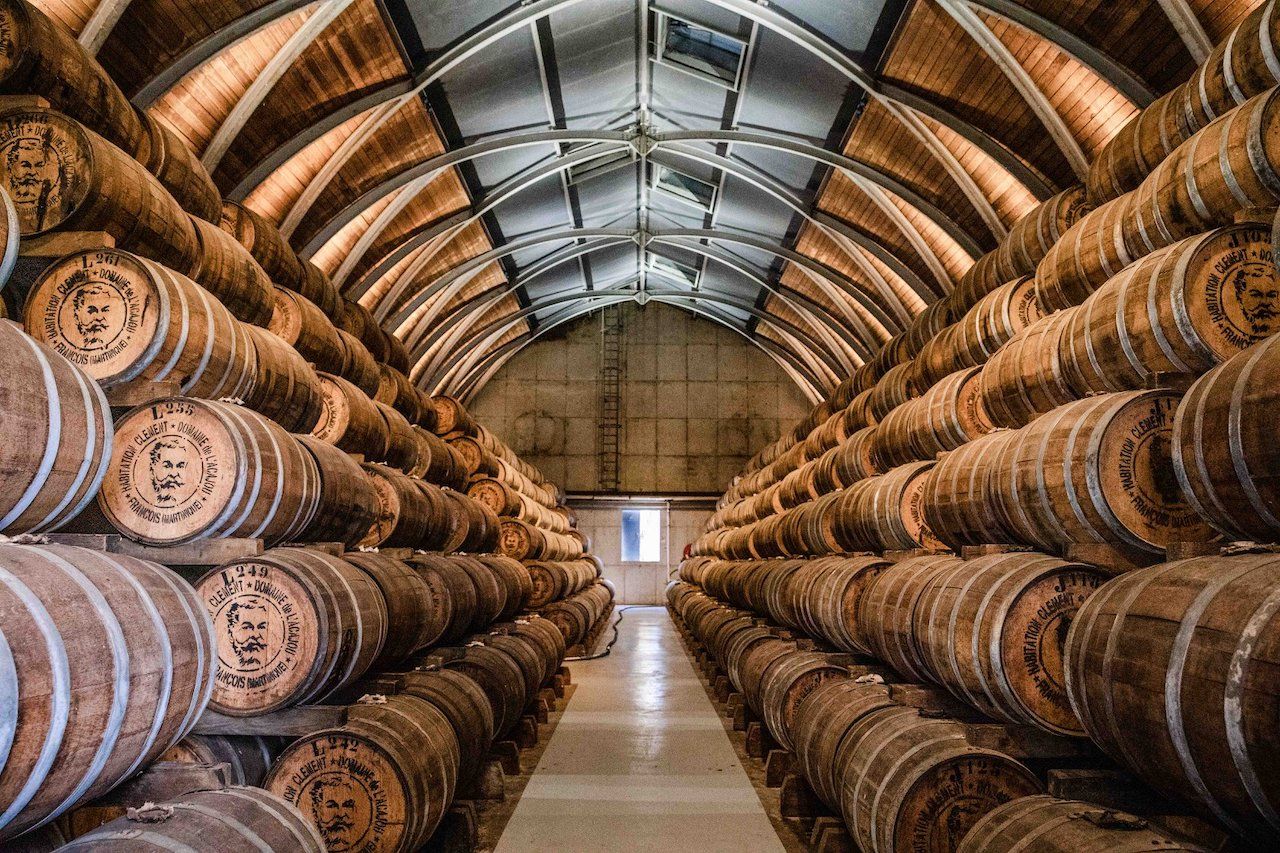 Martinique, which is still a French territory, produces French style agricole rhum using fresh sugarcane juice. There are two sides to Martinique rum, says Kiowa Bryan, the national brand manager for Spiribam: those influenced by the Caribbean, and those influenced by the Atlantic. The Caribbean side is characterized by a calmer climate while the Atlantic has more aggressive winds that come off of the ocean. Even subtle differences in the climate can make an impact on the flavor of the rum, especially since Martinique rum is made according to the sun up to sun down tradition, meaning the sugarcane that’s cut when the sun first comes up must be pressed by sun down.

Spiced rums called shrubbs are also important on Martinique (not to be confused with vinegar-based shrubs). Ben Jones, the managing director of Spiribam, says many families have their own homemade spice blends, and most use oranges as a starting point. Shrubb is commonly made at home around the holidays, but some brands, like Rhum Clément, sell shrubb year-round. A strong spiced rum culture can also be found on nearby St. Lucia with bottlings like Chairman’s Spiced, which is made with a bark called bois bandé that’s said to be an aphrodisiac. On these islands, you’ll fall for the aged rums just as fast as you’ll change any assumptions you have about spiced rum. 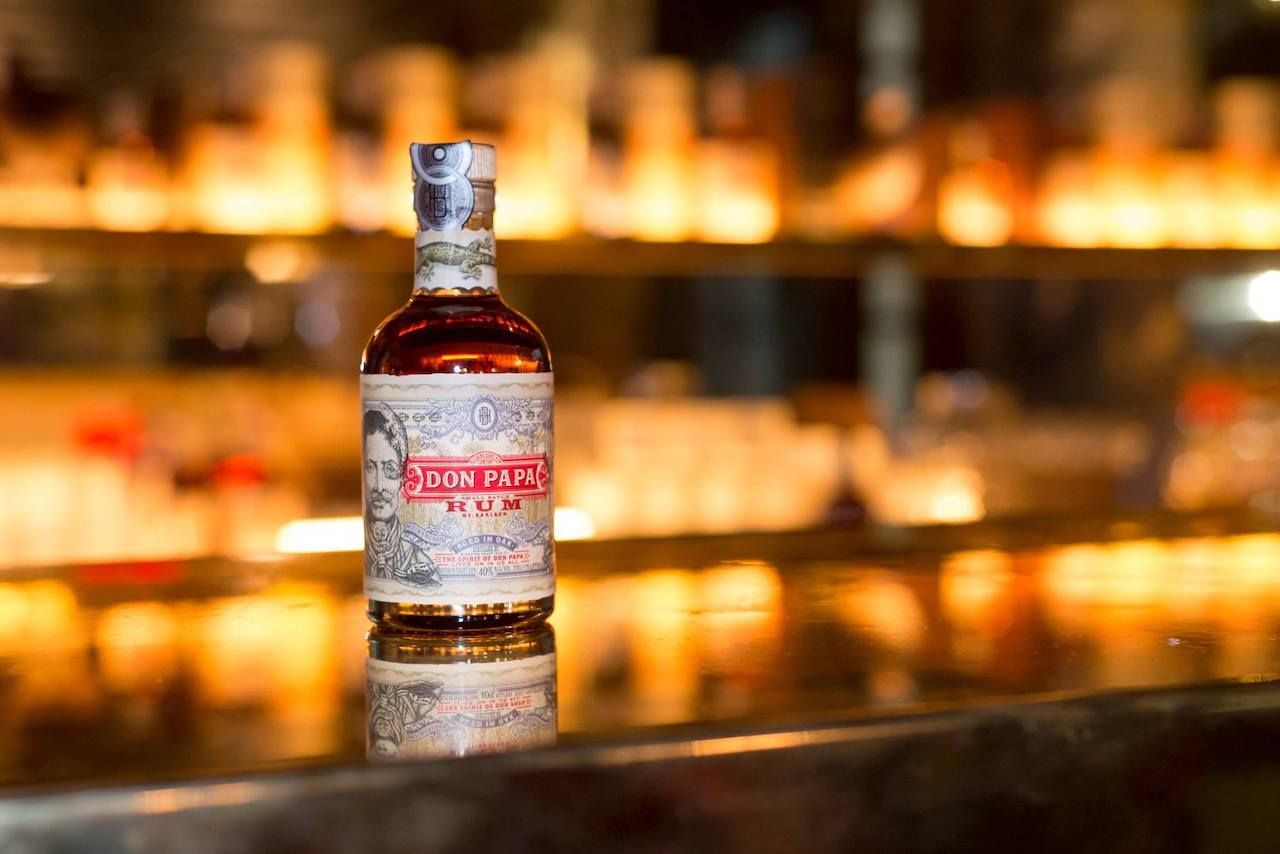 The Philippines, and much of the world outside of the Caribbean for that matter, doesn’t get much attention for its rum. Nevertheless, Filipino rum is one to keep an eye on, as both mass production brands like Tanduay (one of the best-selling rums in the world) and craft brands exist in the country.

Filipino rum production started in the 1800s with Spanish colonization. The classic rum style is similar to rums from other former Spanish colonies like Cuba and Puerto Rico. Typical rums from the country are made with molasses from Filipino sugarcane that’s distilled in column stills. Some brands, like Don Papa, use a native Southeast Asian sugarcane variety called Cara Morada (or Nobel Cane). Aged rums from the Philippines are the ones to try, and are best sipped neat like you would a fine whiskey (and, in fact, many of these rums are aged in barrels that previously held whiskey). 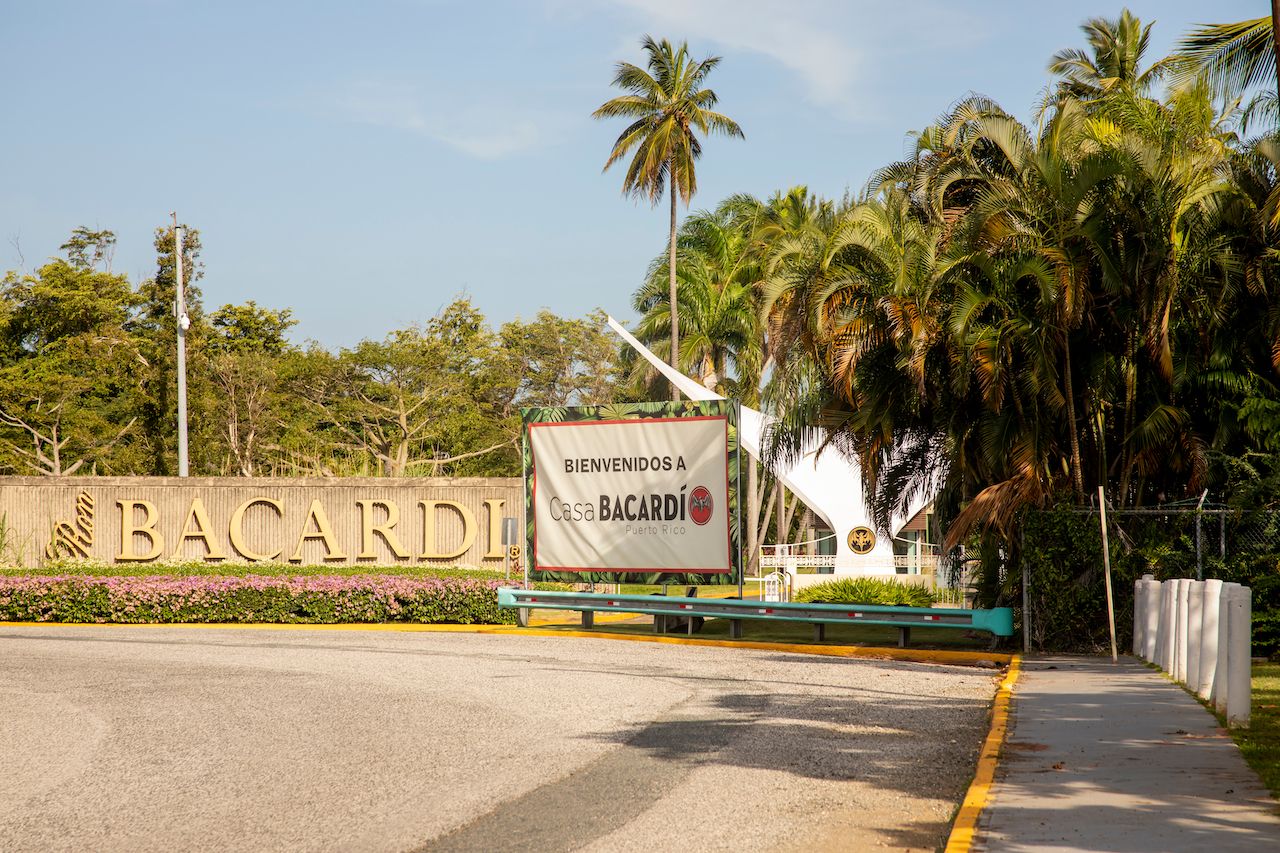 Puerto Rican rum production began in the 17th century with Spanish colonization, but the story of modern Puerto Rican rum is forever tied to the story of Cuban rum. In 1960, when Fidel Castro nationalized Cuba’s rum industry, the Bacardi family was forced to leave the island. They went to nearby Puerto Rico to stay in the rum business, and today, Bacardi is one of the largest rum producers in the world. It’s filled the gap over the past half century for Spanish-style rum after the US banned Cuban imports, and a trademark battle between Cuba’s Havana Club and Bacardi’s Havana Club, which is reportedly made from the same recipe as the Cuban original, has raged for decades.

Though Bacardi is the most well-known Puerto Rican rum, it’s far from the only distillery. Puerto Rico makes around 70 percent of the rum sold in the US, and more than 80 individual rum labels are made on the island. All rums are aged for a minimum of one year in oak barrels, and every style from white rum to spiced rum is produced here. The combination of quantity and quality when it comes to the spirit led to Puerto Rico’s nickname of the Rum Capital of the World. 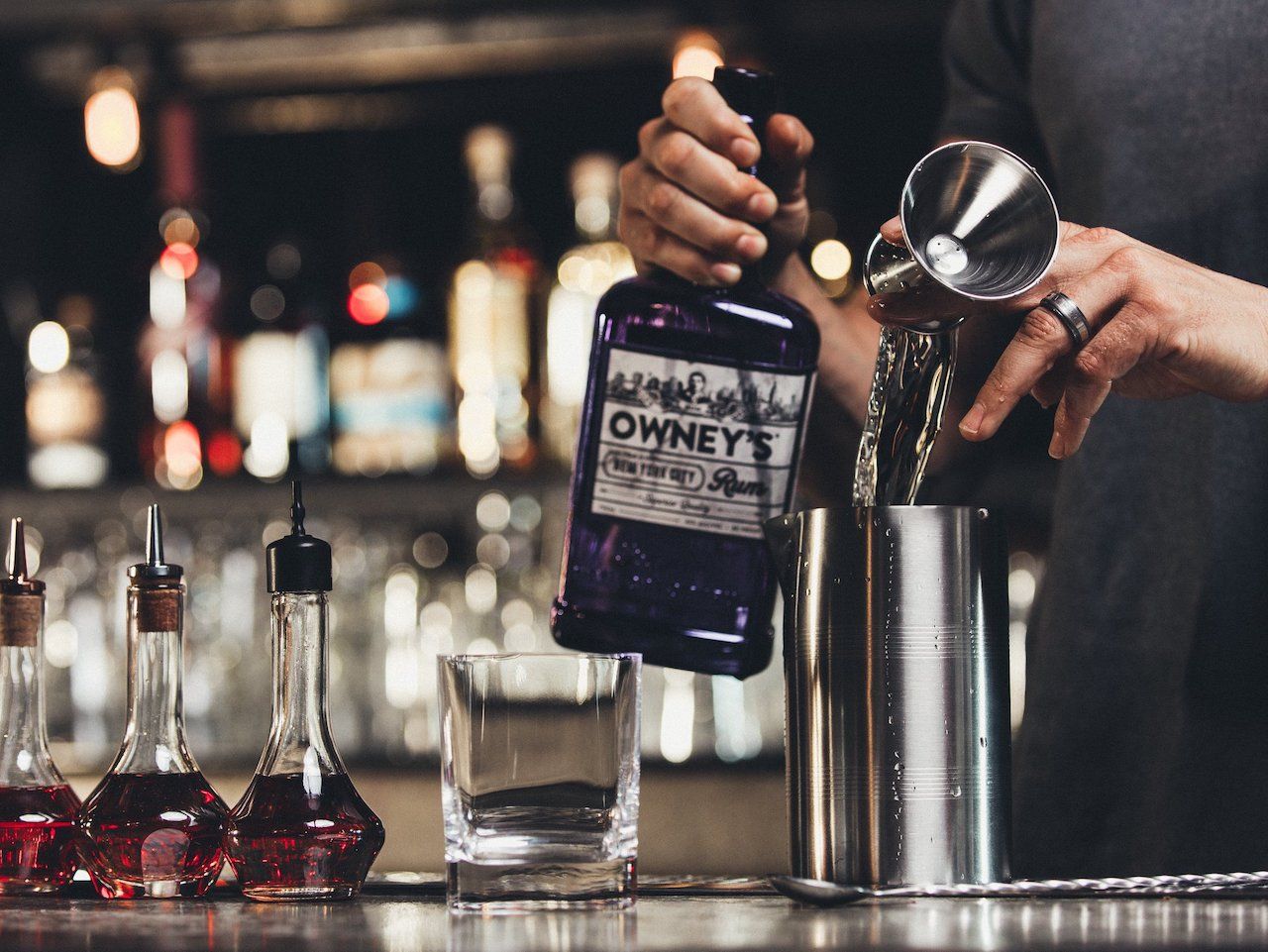 Before the US was a whiskey drinking country, it was a rum drinking country. It was also a major rum producing country due to its position in the triangle trade of enslaved people and sugar between Africa, the Caribbean, and the US. By the 1770s, distilleries, primarily in New England, were making some 5 million gallons of rum a year, according to The Atlantic. A number of factors, including taxes and trade disputes, weakened the rum industry by the 1800s, and Prohibition knocked out much of what was left of the New England rum distillers by the 1920s. Recently, however, there’s been a resurgence of distilleries producing, and in some cases focusing entirely on, rum.

Today’s US rum producers make a variety of styles, but the majority are molasses based. The white rums from US distillers is neutral tasting and easy to mix, while the spiced rums often capitalize on local flavors, like Bayou Rum’s use of Creole baking spices in its spiced rum distilled from Louisiana sugarcane. Many also lean on history. Owney’s Rum in New York City, for example, mixes locally made spirit with rum from the Dominican Republic as a throwback to the rum runners of the 1920s and ’30s. In Hawaii, distillers like Kō Hana Rum are reviving the island’s heirloom sugarcane varieties to create distinctive rums.

The craft distillery boom led to many homegrown rum distillers. According to the Rum Reader, there were around 250 US distilleries producing rum across the US in 2019.