You know cannabis has officially gone bougie when wine country gets involved.

A plant once banished to hidden grow houses in suspect parts of town is now flourishing in the sunny hills of California’s Petaluma Gap. Much like it has for food and wine, the valley’s terroir creates ideal conditions for finely cultivated cannabis, the kind of stuff people will travel here to enjoy with gourmet food and boutique wine.

That’s the hope, anyway, at Sonoma Hills, California wine country’s first premium craft cannabis farm, where standing among the rows of crops you’ll find the gardener once tasked with growing the vegetables for the venerable French Laundry.

Aaron Keefer, who spent his youth gaining an appreciation for plants and his adult life cultivating their flavors, is now the man wine country looks to to deliver a product once shrouded in mainstream stigma. He’s a brilliant combination of California curiosity and western New York work ethic, with just enough fearlessness to convince wine tourists he has cannabis worth traveling for. 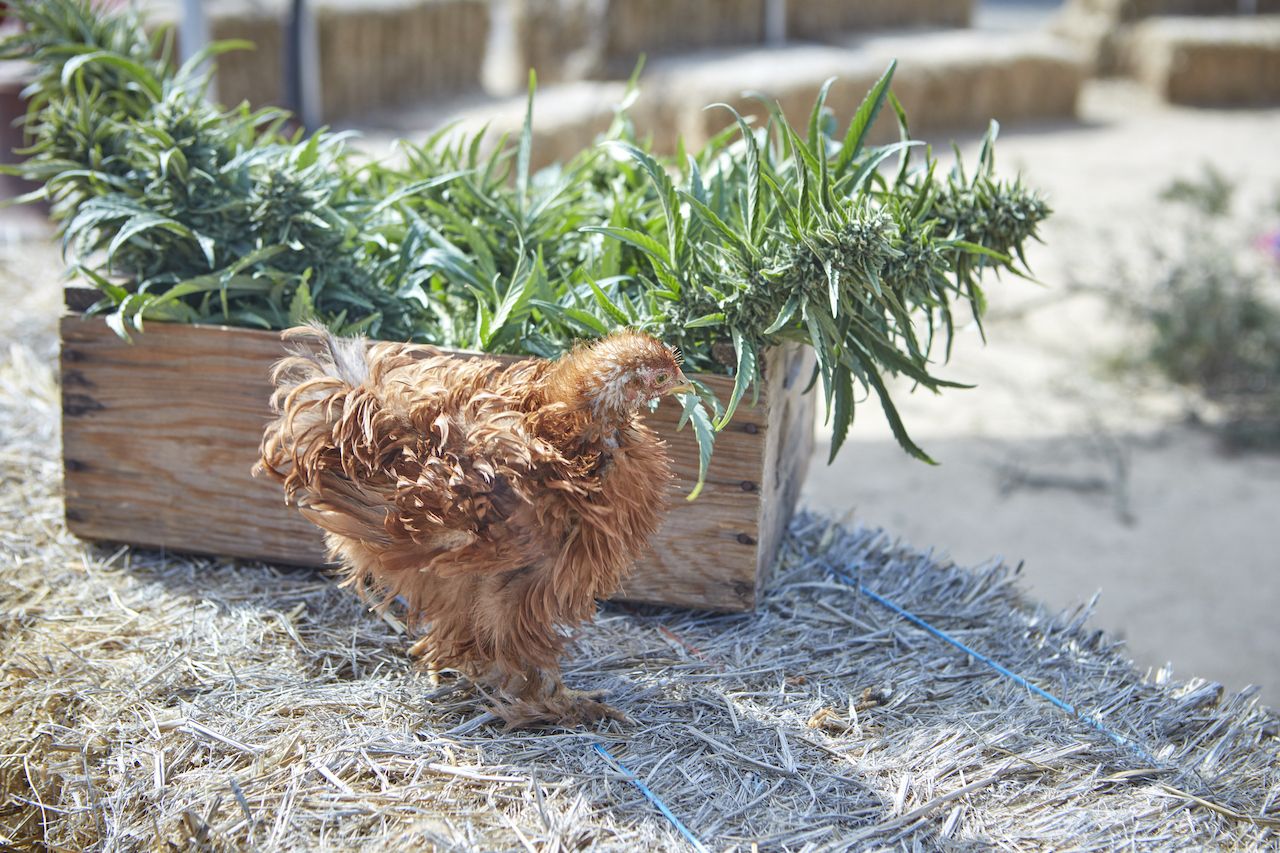 “Would you rather have your marijuana grown in an LA warehouse or out in a beautiful environment like this?” Keefer asks rhetorically from Sonoma Hills’ 37 acres of Northern California paradise. He has become well acquainted with these hills over the past couple of decades, where he honed his growing skills as the head culinary gardener for Thomas Keller’s French Laundry, as well as other Keller Group restaurants.

He spent years experimenting and cultivating ingredients for some of the best restaurants in the world, and says cannabis is no different.

“Marijuana, there’s nothing unusual about that plant,” he says. “Truthfully it’s really just like vegetables. It’s all about genetics, then the soil that can help that plant reach its genetic potential, and then how you harvest it. You only get those nuances and the depth of flavor by building the soil … and that’s where you get the terroir. It’s like wine with all the little things going on.”

Comparing cannabis to wine was the sort of conversation you really only had after consuming a good amount of both a decade ago. But as laws change and cannabis moves into the mainstream, experts like Keefer are taking it as seriously as any agricultural product.

Keefer’s almost unrelenting appreciation for nature and soil came from a childhood spent growing up on a farm in Ovid, New York, not far from Ithaca. Both of his grandfathers were farmers, and Keefer whiled away his afternoons hunting and fishing and coming home to farm-fresh meals.

“I think we had like three channels on TV, so I’d just grab my gun and go wander through nature and observe how it worked together through the season,” he reminisces.

“My one grandfather had a berry farm, and I got to understand how the sun warmed a raspberry, and what it tastes like early in the morning when the dew is still out, and it’s full of water, and the flavor is not really sweet. Then later on in the afternoon, it was just at its peak when the sun warmed it, which is wonderful, but that’s not when you would pick it because it has no shelf life at that point in time. So just understanding those little nuances, growing up out in nature allowed me to observe.”

He fell into restaurant work after being asked to fill in for a line cook who called in sick at a local fine-dining restaurant. A degree from the Culinary Institute of America followed, and over the next decade, he worked in Bay Area kitchens alongside names like the award-winning Spanish chef Julian Serrano and Michael Chiarello, a celebrity chef known for Italian-California cuisine.

“From those guys, I learned passion is important, but drive is more important,” he says. “Because plenty of people have passion. You know, everybody, everybody wants to be passionate. But at the end of the day, if you don’t show up every day and put the work in, nothing’s going to happen. You have to be consistent and you have to really push every day.”

Learning the craft of cultivation 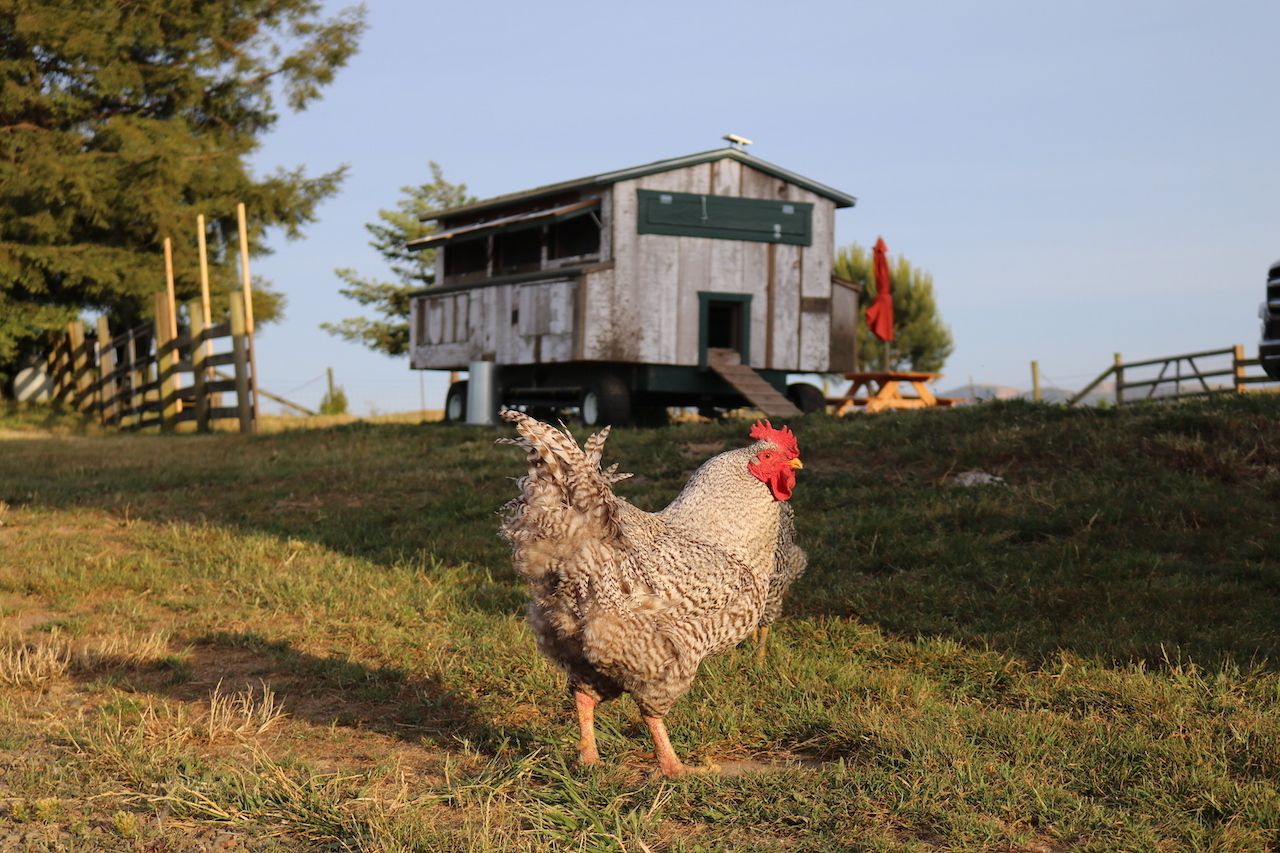 His drive may have led to success in the kitchen, but the frenetic, unpredictable restaurant hours were keeping him away from his children Zachary and Laura. And after one too many missed basketball games, he moved onto another, more idyllic career: growing vegetables for the French Laundry.

There, he developed a reputation as a perpetual student of the craft, who was never afraid to try a new idea but also wanted to learn all he could in the process.

“What separates me is my work ethic, and that I never stop learning,” Keefer says. “I never think that I’m the best at anything, and I will learn from everyone around me.”

To gain that education, he traveled the country to farms like Blue Hill in New York, to Chef’s Garden in Ohio, and Thomas Jefferson’s Monticello in Virginia.

He returned to California armed with a knowledge that afforded him a fearless attitude in the garden. One that led to growing plants people could only try at French Laundry, and he became a major factor in the restaurant’s success.

“He’s not afraid to fail,” says Kaelin Trilling Ulrich, chef de cuisine at La Calenda, Keller’s Oaxacan concept in Yountville, California. “He says he’s not afraid of going into the unknown, he’s willing to just do it, just go for it. He’ll say, ‘I’m not sure what the flavor profile is going to be, or how we’re going to use it,’ but he’s still very confident.”

Some might say it borders on overconfidence if he wasn’t always so successful. When Keller was opening La Calenda, Keefer visited Ulrich’s family in Oaxaca to learn how they grew local ingredients. While there, he acquired seeds for the hard-to-find chile de agua and smuggled them back into the United States. Though it took some trial and error, he ultimately began growing the locally rare chilies in the French Laundry garden, much to the confusion and envy of other local restaurants.

“We had so many of these peppers, people were asking, ‘Where are you getting them from, who is shipping them to you?” Ulrich recalls. “He grew like 400 plants; we got so much pepper. We fermented, pickled. Some we stored. It’s a flavor we couldn’t get here before, and for people to enjoy flavors like this, it’s very important. It’s very gratifying.” 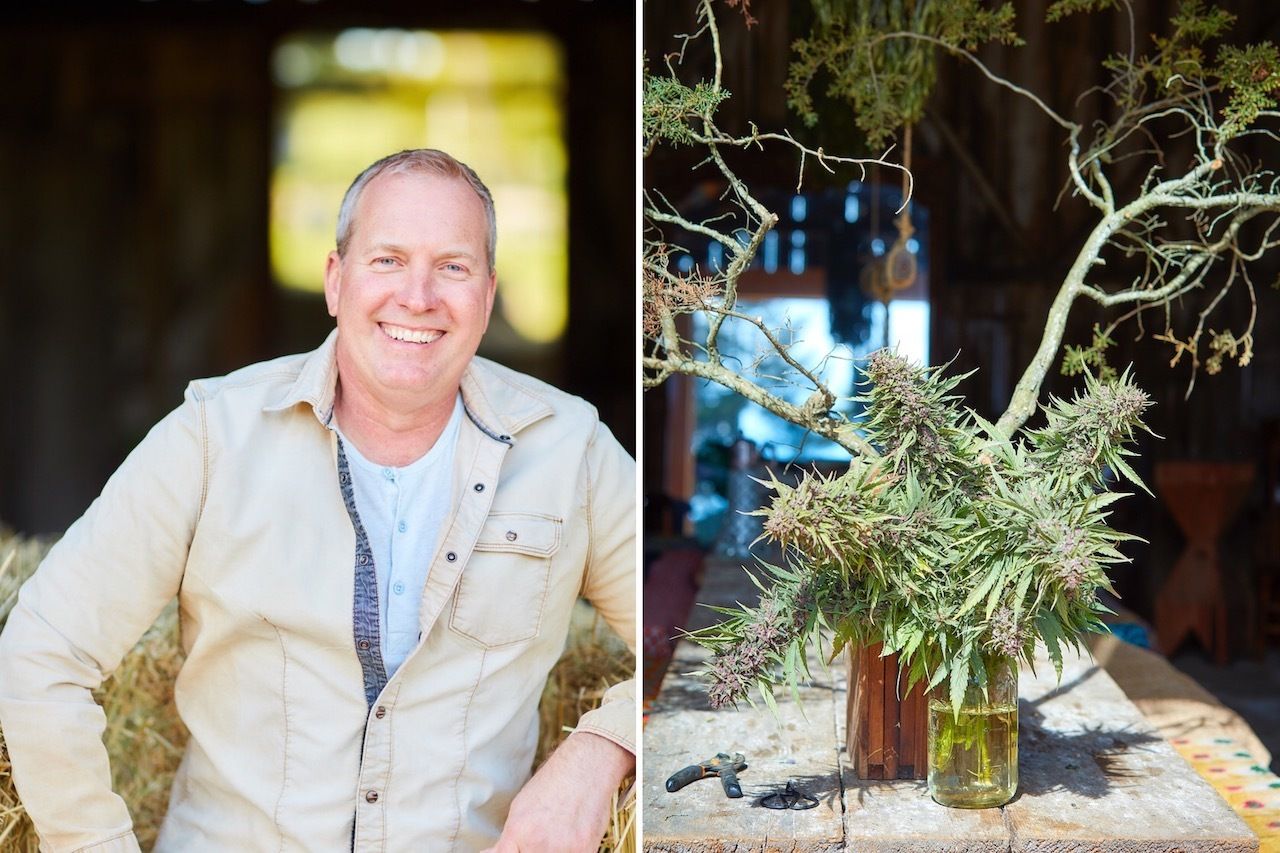 Not to label Keefer as a scofflaw, but his confident fearlessness is a huge part of why he’s well equipped to handle turning cannabis into a craft product. He understands risk but also how to destigmatize cannabis to a sometimes wary audience.

It was a skill he put to use when explaining to his kids that their father was taking a job growing marijuana.

“It’s something you’ve protected them from when they were younger,” he says. “Because who knows what they’d say at school, or how they’d be judged by the administration, or teachers, or even students.”

But broaching the subject with his children, who are now 18 and 14, was actually surprisingly easy for Keefer.

“As we got close to it, I talked to them about taking this next job [at Sonoma Hills], and they just kinda shrugged and were like, ‘Ok, dad. You’re still a dork.’”

Keefer said it was also essential he educate his children on marijuana’s effect on developing brains.

“I was honest with them about what drugs did, but that it’s their choice at the end of the day,” he says. “I look at it as the newest legal intoxicant, so maybe later on in life they will partake, but as of now they don’t.”

Keefer’s teenage cannabis experience was a little different but also laid the foundation for his latest career. He grew his first cannabis plant at age 15 when a friend’s father returned from Amsterdam with some seeds. He also wrote a lengthy research paper in 10th grade about how the war on drugs was the largest civil rights issue of our time.

“It’s always been like a little side hobby, just something I played around with,” he says. “But eventually it became something that I love to do.” 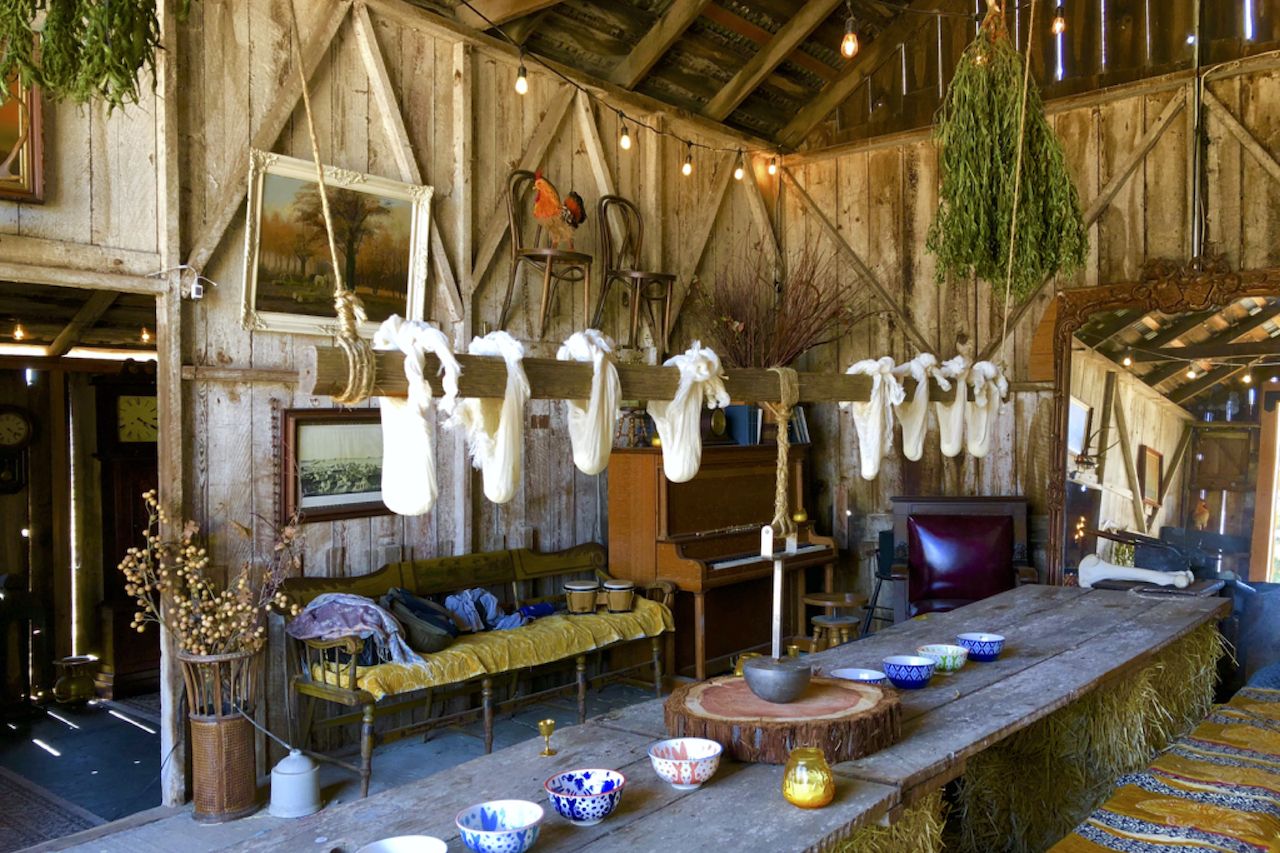 Already, Keefer has brought that love — as well as his fearlessness, process, and drive — to creating craft cannabis at Sonoma Hills. He envisions cannabis as a natural product like tobacco — something to be enjoyed before a fine meal in the great outdoors.

“I don’t think strength is the biggest thing,” he says. “When people open up a bag, the first thing they do smell the product, and if it doesn’t have a really, really punching, heady smell, you know, they don’t really go for it. So we need to look at the flavor. It’s just like vegetables, you want to get those nuances and the depth of flavor.”

His goal with Sonoma Hills is to use those flavors as part of what Keefer calls a “mari-winery,” where people can come and enjoy food, wine, and cannabis all grown from the same land. Of course, cannabis tourism isn’t currently sanctioned by the State of California, so that dream is on hold. But with cattle, chickens, vegetables, and even a pregnant pig at Sonoma Hills, it’s ready once tourism is permitted.

“I don’t know any county that wants to turn their nose up at tax revenue,” he says. “We have roadblocks in the way that will be falling down as these old ideas kind of fade away. And I do believe that eventually we will be able to have events up here and have parties. We’re lucky to have an amazing group of people, and we’re going to create this product as a great group. We’re going to produce great marijuana. And we will rock people.”

CannabisCannabis Regions Should Get the Same Recognition as Wine Regions. Here’s Why.
Tagged
Cannabis
What did you think of this story?
Meh
Good
Awesome

9 of the Most Stylish Boutique Hotels in Sonoma County

What It's Like To Go Forest Bathing in Sonoma County, California

Get Paid $10,000 a Month To Work in Sonoma and Become a Wine Expert

3 Travel Itineraries That Take in the Best of Sonoma County