The typical trip to Death Valley National Park is a quick one. Enter the park by car from the east or west side, stop at a handful of key spots for pictures, maybe take a short hike, and work your way out the other side. It’s hot — the average summer high temperature hovers around 110 degrees and is often higher, with the odds of an afternoon rainstorm to cool off the sweltering landscape landing, at best, slightly above no way in hell.

As such, this park in eastern California may appear to the casual national park enthusiast as a mere blip on an otherwise star-studded itinerary through America’s western heartland. But for anyone seeking a new take on the iconic national park, cycling across Death Valley may be your next adventure. Here’s how to make that happen, but be forewarned — be ready to sweat, grind, and curse yourself through one of the most rewarding excursions on federally protected land.

First up: preparing yourself 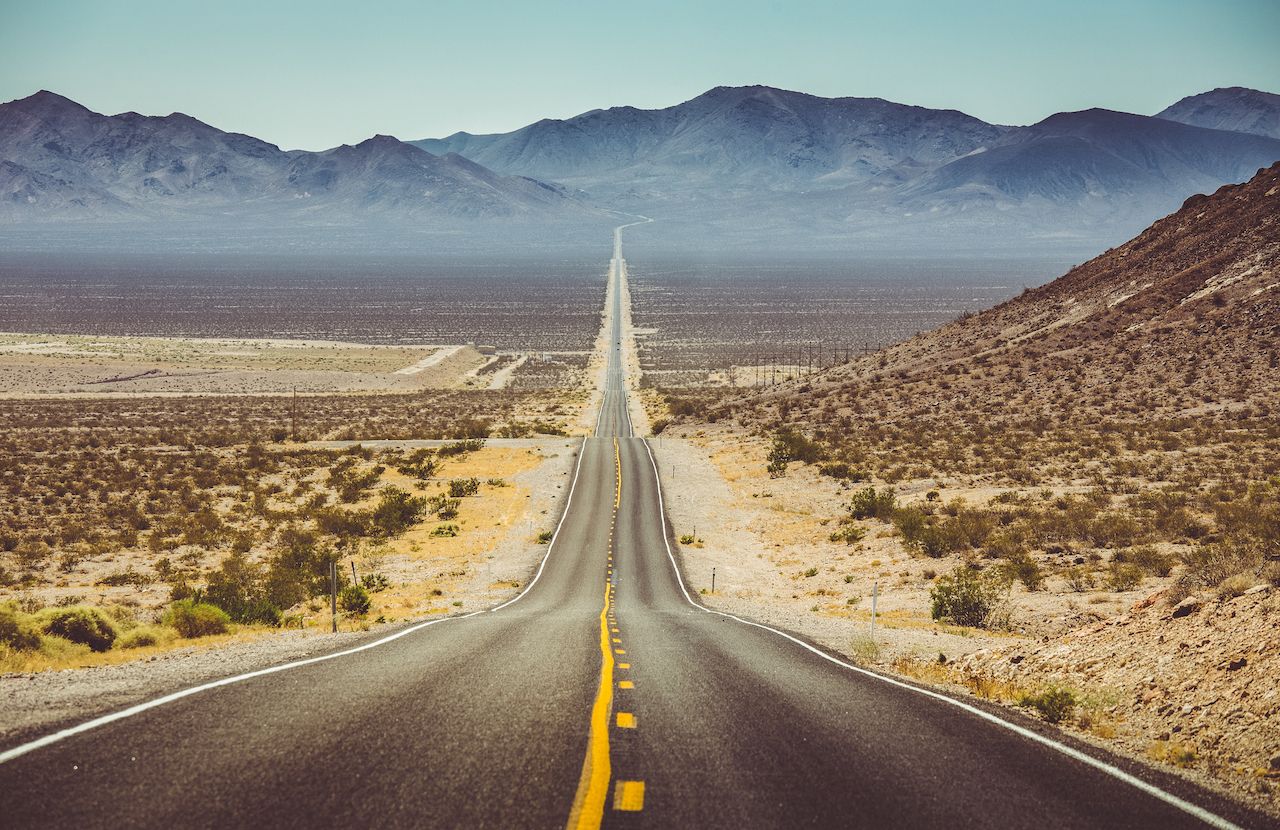 Death Valley is known for its suffocating heat, stifling aridity, and for being the site of the lowest point in the western hemisphere — Badwater Basin — 282 feet below the level of the sea. Yet the national park is the largest outside of Alaska, at 3.4 million acres, and all of the park’s paved and dirt roads that are open to vehicles are also open to bicycles. And with more than 750 miles of tarmac and dirt track waiting to be explored, the park deserves the kind of up-close, slow-paced experience that cycling provides.

Located fewer than 200 miles away from both the Grand Canyon and Yosemite, two of America’s most beloved and visited national parks with 6.3 million and 4 million visitors in 2018, respectively, Death Valley attracts a paltry 1.7 million annual visitors. Other than the occasional car whizzing by, you’ll essentially have the place to yourself. Have backup bike gear and a first-aid kit in your pack. This route is easy to follow and follows established highway the entire time — but it’s 250-plus miles from Las Vegas to Lone Pine, California, lined with curves and one rather intense mountain pass in the heart of the park. It’s not for the casual bike commuter — but that said, you don’t need to be a pro rider either. If you’re in good physical condition and are adept at route planning, camping, and waking up early, you have the basic criteria. Here are some considerations to work out before leaving home: 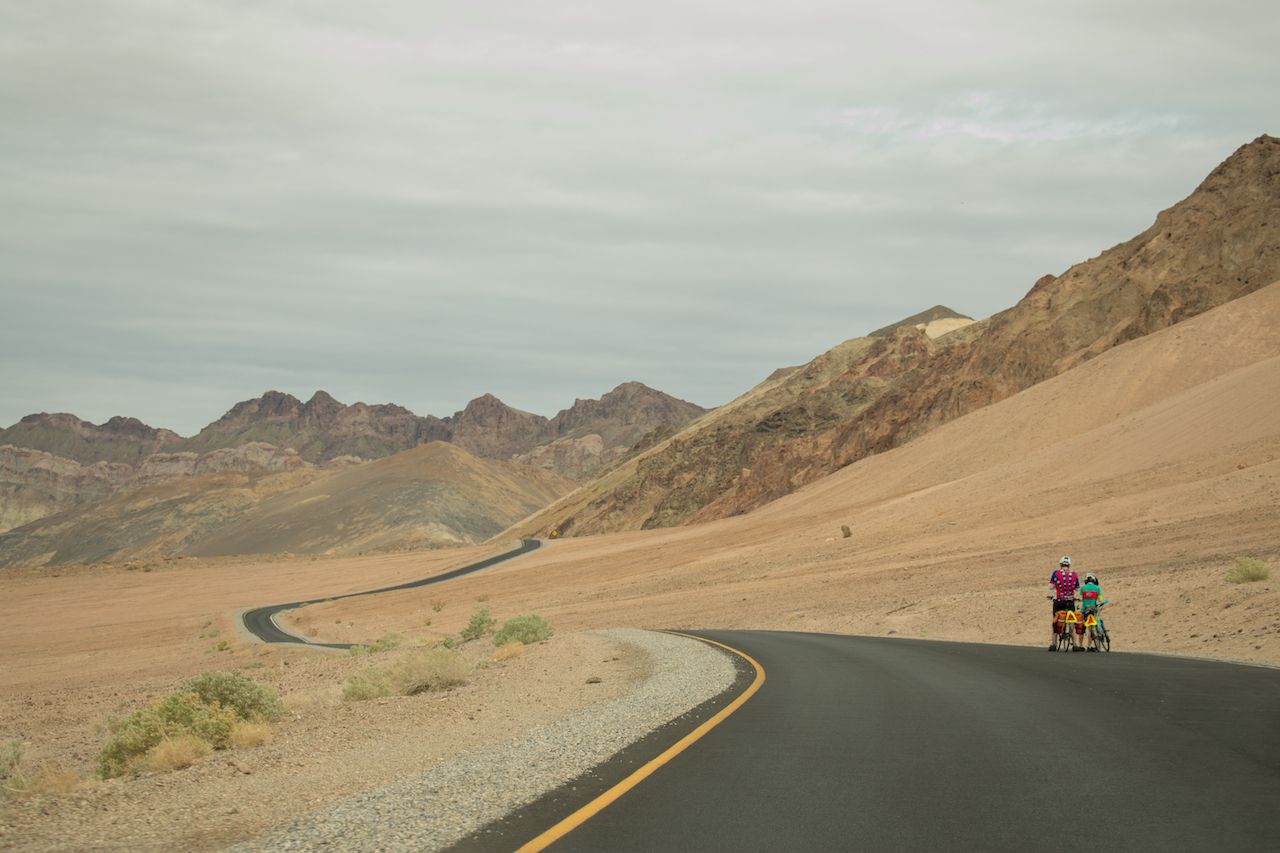 While the notion of crossing the park from boundary to boundary might be romantic, you must consider the logistics of your arrival and departure. An east-to-west route can start in Las Vegas, where you can rendezvous with your travel buddies and assemble your bikes. This was the route a friend and I chose for our recent excursion, cranking our way out of Sin City into the wind for most of the first day’s 85 miles on US 95.

This busy, two-lane highway has wide shoulders, making for a comfortable ride. The best place to stop for lunch is in Indian Springs, Nevada, 45 miles outside of Vegas. We ate under an aluminum carport next to a grocery store here, watching drones from nearby Creech Air Force Base circle overhead. Later, we took another break under an overpass on the outskirts of Mercury, NV, a closed-to-the-public town on the southern end of the Nevada Test site, where the US Department of Energy conducted nearly a thousand nuclear tests between 1951 and 1992.

Amargosa Valley, Nevada, located at the junction of US 95 and State Route 373, could be an alternative starting point to cut out the first day, assuming you can get yourselves and your bikes there. This is where we camped on our first night, comfortable in a rest area across the highway from a fireworks stand, brothel, and the Area 51 Alien Center, a kitschy gift shop presumably filled with UFO bric-a-brac. The below map outlines the route from start to finish.

Wait out the hottest part of the day. 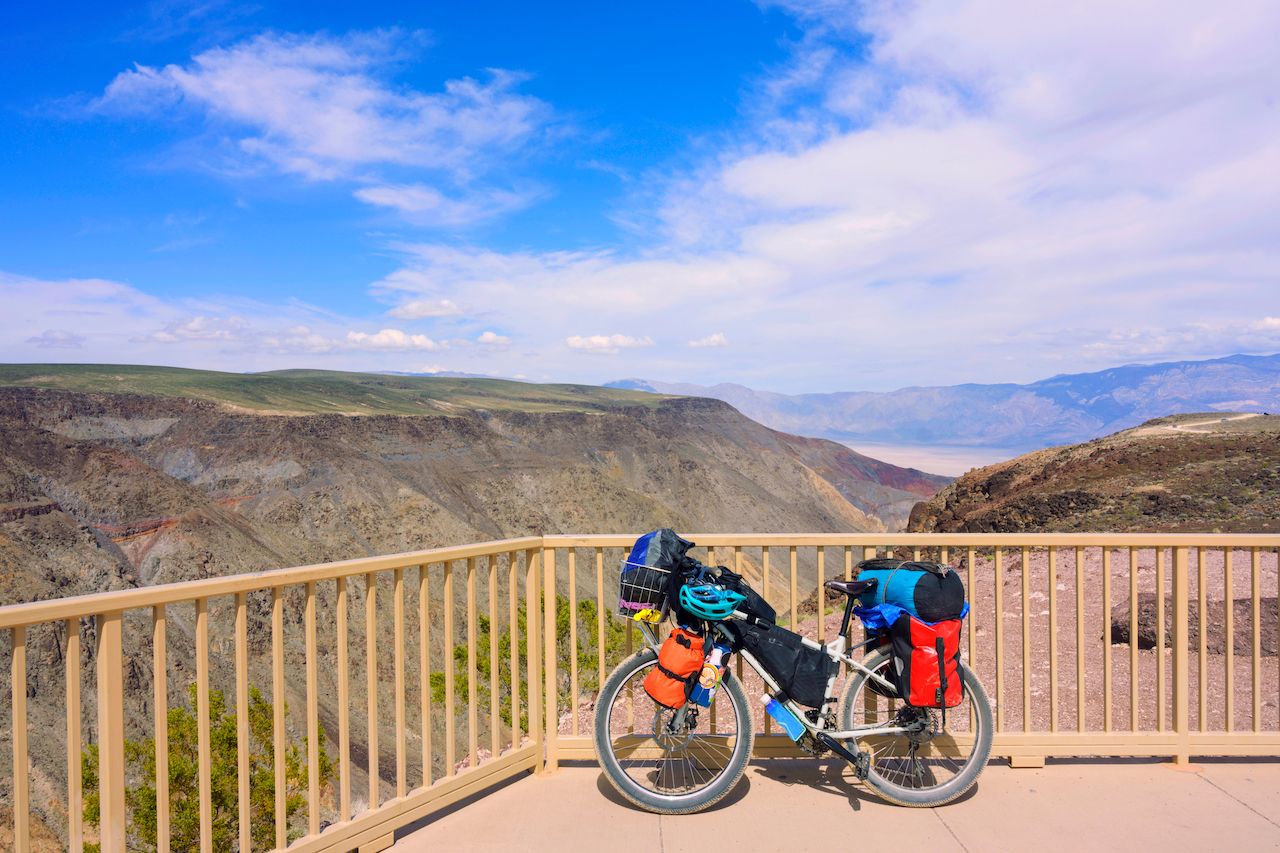 The key to pedaling across the park is to plan your day to take advantage of the cooler morning hours for most of your day’s miles. Get started in the early morning — it’s tough to sleep in when the sun starts pounding down anyhow — and push on until lunch. Use the afternoons to rest and beat the heat. This is true even on day two, your first day within the park itself.

Cross into California onto State Route 127 before turning west at Death Valley Junction, and climb State Route 190 along the southern slope of the Funeral Mountain Wilderness Area. After 11 miles of climbing, you’ll drop toward the national park and enjoy a 3,000-foot descent over 20 miles to Furnace Creek. Don’t miss the photo opportunities at the park’s entrance sign and at Zabriskie Point, where you can gaze over the rust-colored Furnace Creek rock formation or take a short hike to view the surrounding badlands. Furnace Creek campground is the ideal camping spot for night two, your first night in the park.

This puts you at right around 50 miles of riding on the day and, in all likelihood, ready for a well-deserved evening of relaxing at the campsite. Just remember that each of the park’s public campgrounds are first-come, first-served with payments to be made on-site. Bring cash, and check in as early as possible. Three campgrounds are available there — check seasonal opening and closing dates for Furnace Creek, Sunset, and Texas Springs campgrounds.

On the way in, don’t miss the visitor’s center where you can fill your water bottles, watch a 20-minute film about the cultural and natural resources, and pay your fee of $15 for individuals without a vehicle. While at the visitor’s center you also can check on road conditions and weather. Here is also where you’ll grab free backcountry camping permits and inquire about where you’re allowed to camp.

Plan your itinerary based on water. 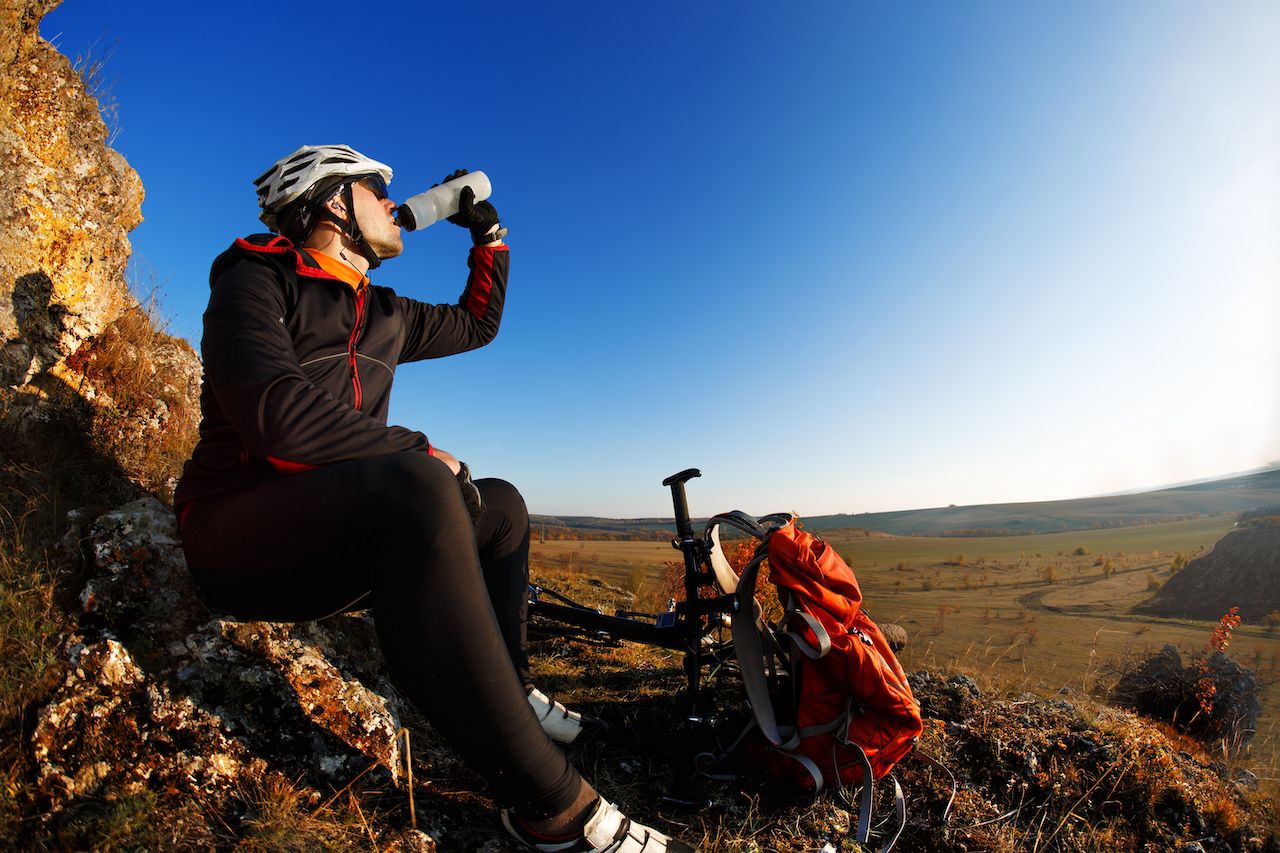 Staying hydrated cannot be overstated. The physical exertion of such a ride — plus temperature and weather conditions — will put huge hydration demands on your body. Be equipped to carry more than enough water than you think you will need, then carry more still — a CamelBak pouch plus a canteen, at the very least. Also, check at the visitors center or call ahead to find out which facilities have potable water, and plan your stops throughout each day based on those places.

Our original itinerary had us pedaling north from Furnace Creek on State Route 190 on day three, then continuing north on Scotty’s Castle Road until we met Big Pine Road, which would take us over the northern mountains and finally out of the park toward Big Pine. But when we considered our water resupply points along the route, we decided instead to continue on 190 and exit the park through Stovepipe Wells and Panamint Springs toward Lone Pine.

After camping off the main road and starting early again, we pulled into Stovepipe Wells around mid-morning on our third day, where I was humbled and more than a little embarrassed to be standing outside the gas station with my thumb out, trying to hitch a ride over 4,956-foot Towne Pass, the saddle between the Panamint Range and the Cottonwood Mountains.

The 30-mile section between Stovepipe Wells and Panamint Springs, in the next valley over, is the shortest full day in terms of mileage, but the arduous 14 miles over the pass is the steepest climb on the entire ride. Your reward on the other side is Panamint Springs Resort, which has camping facilities but also rustic lodging accommodations if you prefer a night tucked into an actual bed.

From Panamint Springs, ride the next morning up the winding road past Father Crowley Overlook and toward the park’s western exit through the Coso Range. I walked my bike off and on during this part of the trip, exhausted, while my partner rode on. I eventually reached the last pass around Saline Valley Road and began the long descent against the wind and joined State Route 136, which loops into Lone Pine. The final night of the trip can be camped in a municipal campsite in the evening shadow of Mt. Whitney, the highest point in the 48 contiguous states. At this point, you’ve successfully pedaled Death Valley National Park.