For many, one dish instantly pops to mind at the mention of Italian-American cuisine: fettuccine alfredo. Beloved for its signature rich, thick, and luxuriously creamy white sauce (and derided for the exact same quality), some say it should be shunned for its lack of authentically Italian characteristics. Yet for Americans, the heavy, filling, and slightly greasy dish is considered a classic that’s found on both Olive Garden menus and at upscale restaurants in centers of Italian immigration like New Jersey.

There’s still debate over whether or not fettuccine alfredo can really be included in the pantheon of genuine Italian cuisine. Once you look at the history of the dish, you realize the story is more complicated than you might think. Here’s everything you need to know about the origins of this controversial but beloved dish, and the differences between the original fettuccine alfredo and its American counterpart.

The origins of fettuccine alfredo 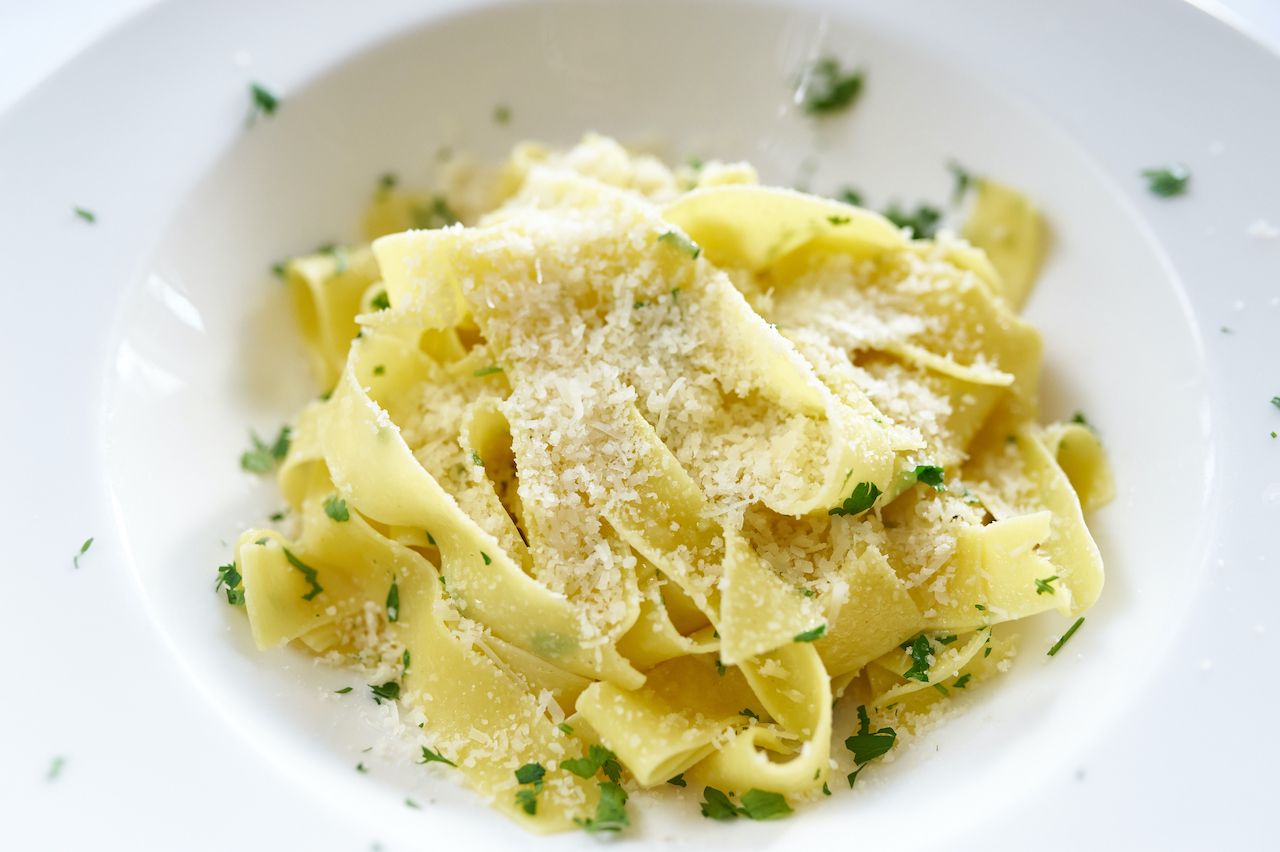 There are two popular and widespread versions of how fettuccine alfredo was created. Both focus on one central figure: Alfredo di Lelio. What history agrees on is that the chef and restaurant owner created the dish for his wife. Then the stories diverge.

In the first version, his wife, Ines, suffered from debilitating nausea while pregnant and couldn’t keep any food down, so her husband prepared her pasta in bianco — fresh pasta tossed with Parmesan cheese and butter. It became the only dish she could stomach, and di Lelio added it to his restaurant’s menu.

The second version of the story posits that he prepared the dish for her after she gave birth. In 1908, after delivering their son Armando, Ines didn’t have an appetite. Hoping to build up her strength and help her recover, di Lelio prepared her a dinner of noodles with butter and fresh Parmesan. Six years later, in 1914, di Lelio opened his restaurant Alfredo in Via della Scorfa, and Ines suggested that he add the memorable dish to his menu.

The second version of the story would seem to be the official one, at least according to the website for the Il Vero Alfredo, or “The True Alfredo” — the second restaurant that di Lelio opened in 1950 — but it’s hardly the most widespread or accepted version. An article for HuffPost, for instance, repeats the story that di Lelio created the dish to combat his wife’s pregnancy nausea.

What we do know is that, in the 1920s, silent film stars Douglas Fairbanks and Mary Pickford visited Italy on their honeymoon and stopped by Alfredo di Lelio’s restaurant. The couple were so enamored with di Lelio’s hospitality (and cooking) that they later gifted him with a gold engraved fork and spoon, which read “To Alfredo the King of the noodles.”

Soon the restaurant became a tourist destination among couples who wanted to relive Fairbanks and Pickford’s date night, according to the same HuffPost article, and the restaurant gained a reputation for its impeccable fettuccine dishes.

However, the dish that di Lelio served at his restaurant in Rome differs from the fettuccine alfredo that appears on restaurant menus in the United States.

The difference between Italian-American fettuccine alfredo and the original dish 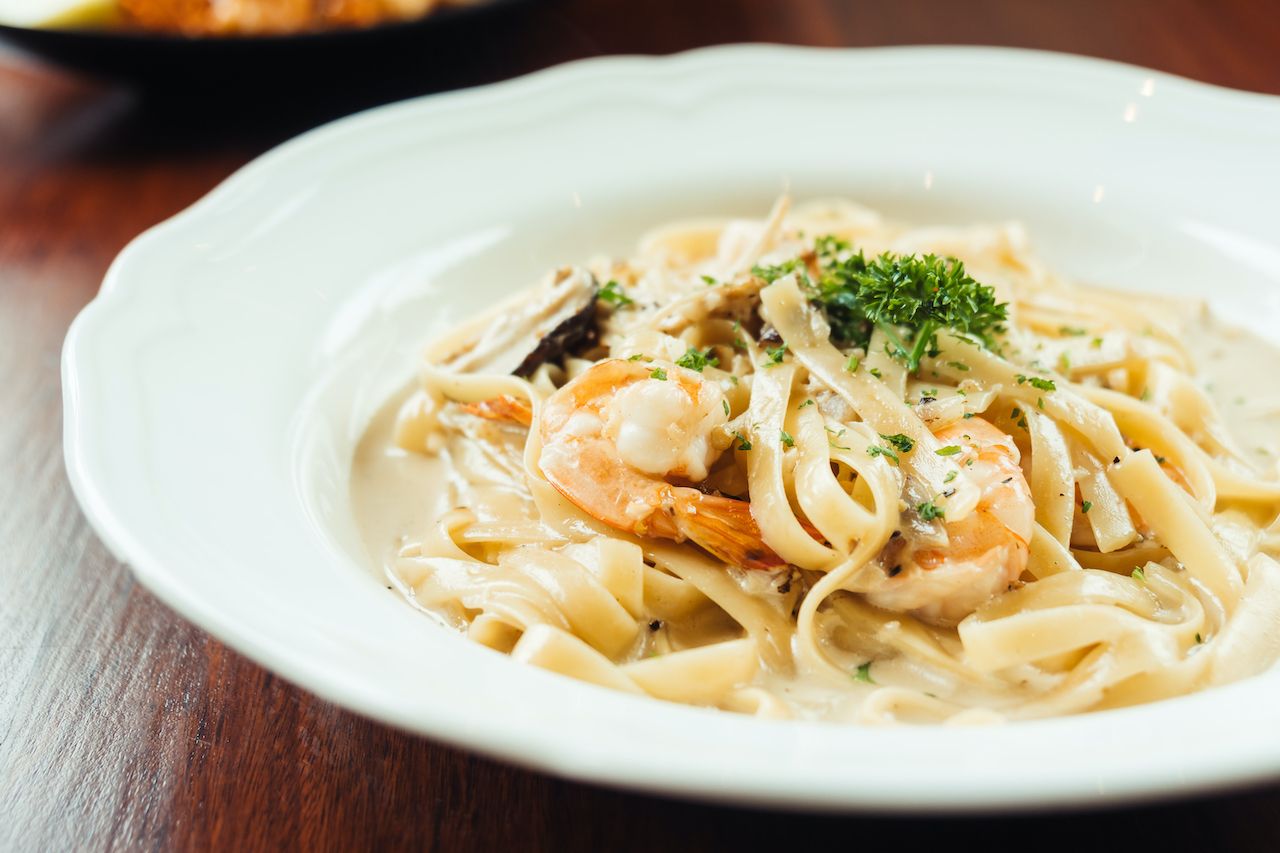 Before delving into exactly where the recipes for the two dishes diverge, it’s important to get some background on how di Lelio managed the fame that accompanied the popularity of his restaurant. The legendary chef retired in 1943 and left the family business to his son Armando. Just three years later, he sold the restaurant to two of his waiters.

But the family wasn’t ready to divest from the restaurant business. In 1950, Armando opened Il Vero Alfredo, or “The True Alfredo,” with his father’s blessing. The restaurant is still in the family; management passed to Alfredo III and his sister Ines di Lelio in 1982.

Here is where fettuccine alfredo as Americans know it comes into play: The family opened a second location at Rockefeller Plaza in 1977 called Alfredo of Rome (which has since closed). It was there, on American soil, where the recipe for di Lelio’s original fettuccine alfredo transformed into the dish we know today. The alfredo sauce, which now catered to American tastes rather than Italian, evolved to include ingredients like flour, cream, milk, and shrimp or chicken.

To this day, di Lelio’s original recipe only contains three ingredients: fettuccine, young Parmesan cheese, and butter. That’s what you’ll get if you order the dish at Il Vero Alfredo. In fact, across Italy, you’re likely to encounter blank stares if you request “fettuccine alfredo” and expect to be served fettuccine noodles doused in a heavy cream sauce.

What we call alfredo sauce here in the US doesn’t exist in Italy. Its closest cousin is similar to di Lelio’s invention: a sauce known in Italy as “al burro” (with butter) — pasta served with melted butter that’s sometimes infused with fresh sage, as well as grated Parmigiano. So if you want to try the Italian version of fettuccine alfredo, you might have better luck ordering fettuccine al burro.

Where to try the original fettuccine alfredo in Italy 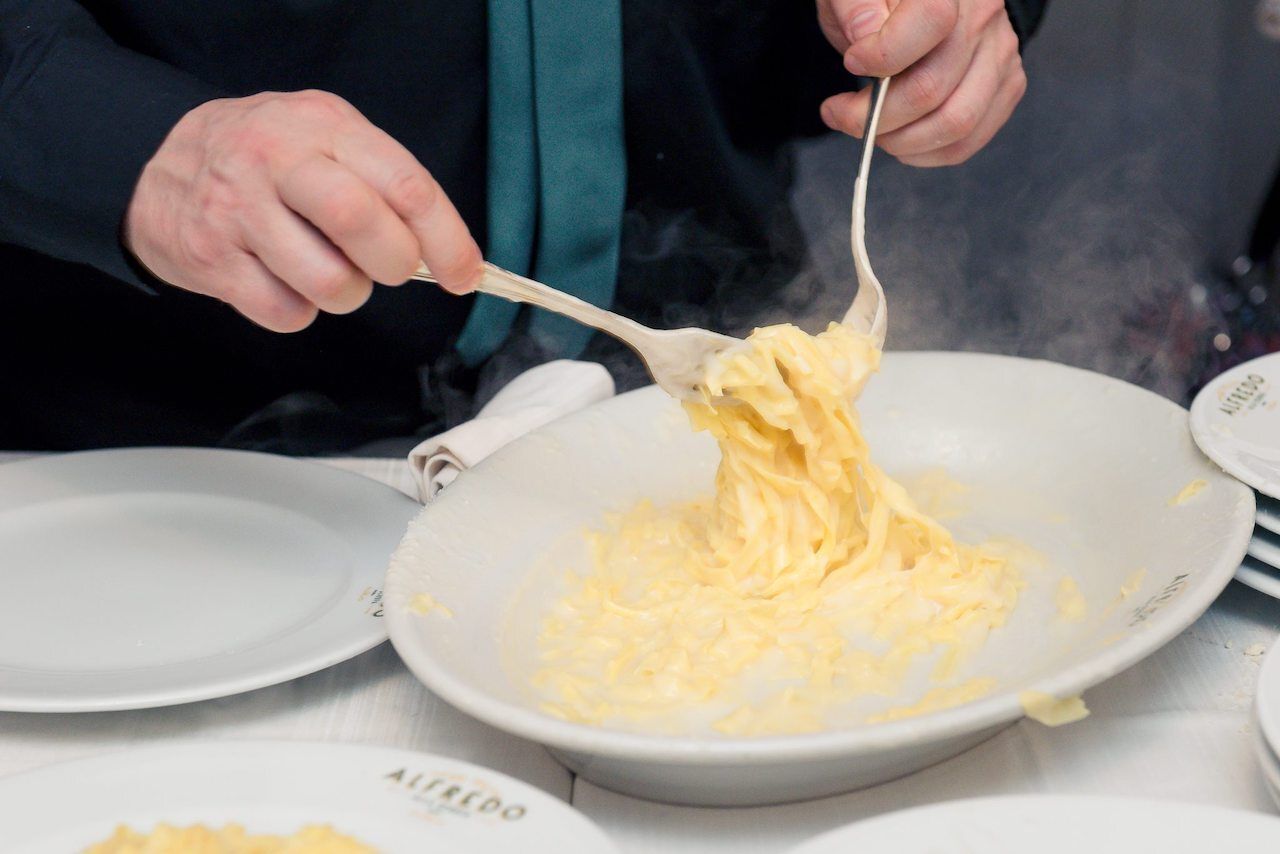 Today, Il Vero Alfredo still claims to be the home of “Le Vere Maestosissime Fettuccine all’Alfredo” — the original fettuccine alfredo. It’s the house special, so if you’re visiting Rome and want to see where this story began, head there. However, there is another option.

Di Lelio’s first restaurant — the one Douglas Fairbanks and Mary Pickford visited on their honeymoon — is still open. It’s not owned or operated by the same family anymore (remember, the di Lelios sold it in 1950) but it too claims to be the original home of fettuccine alfredo. Called Alfredo alla Scrofa Restaurant, its slogan is “birthplace of Fettuccine Alfredo.” No matter which claim you chose to believe (and technically, both are true in their own ways) you’ll get the same dish: fettuccine noodles in butter and Parmesan cheese — no cream.

Hopefully this settles the debate over the authenticity of fettuccine alfredo: The dish is an Italian invention, but the ingredients of the Italian original differ from the American classic. Fettuccine alfredo evolved into the creamy, heavily sauced dish Americans are familiar with today not at its original home in Rome, but once it migrated to American shores.