When I ask my friends who grew up in China but moved abroad in the early aughts whether they have had egg waffles, most say no. Some of them have never heard of it, or only have a vague idea of what it is. The conversation typically goes like this: “What’s that?” “A waffle that looks like a giant bubble wrap.” “Oh, I think I’ve seen it on social media.” “What’s the context?” “Something from Hong Kong.”

Their naivete is no surprise. Until recently, egg waffles have remained a niche regional specialty, with a humble origin story: Grocery stores in the 1950s put their cracked eggs to good use by turning them into a pastry. Soon after, peddlers began to sell them in push carts to make a living and support families.

Growing up in mainland China before the age of the internet, mobile phones, and so-called foodie culture, I had never heard of egg waffles until I went to Hong Kong for an exchange semester during college. On weekend nights, my two roommates and I would go out for “snack crawls” around Causeway Bay or Mong Kok, roaming the jam-packed pedestrian streets for hours and sampling whatever street food that looked appealing — milk pudding, curry fish balls, cuttlefish skewers, and egg waffles, or egglets in literal translation (in Chinese egg waffle is written as 雞蛋仔, 雞蛋 meaning eggs, 仔 meaning small). 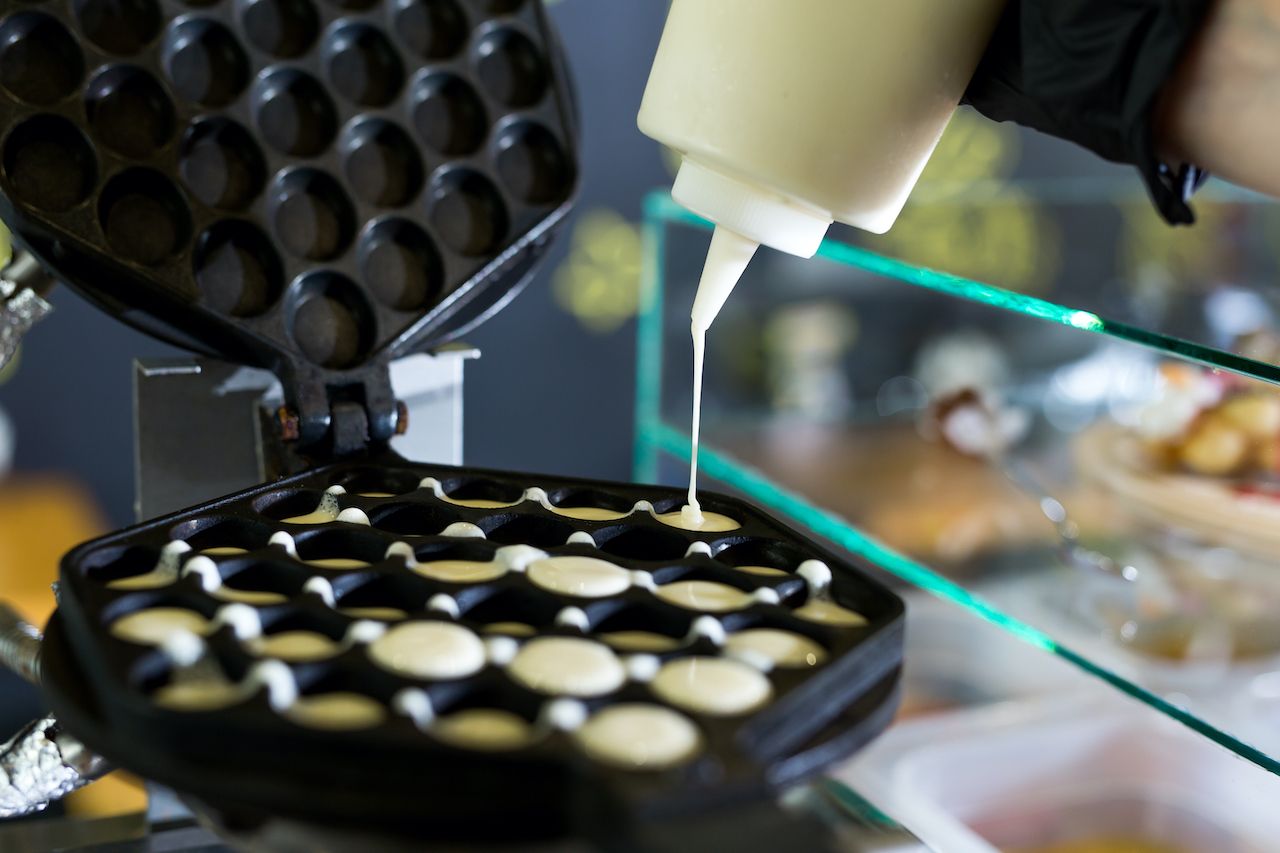 If you’re on the hunt for an egg waffle, you’ll notice the sweet, buttery smell first. A row of stove burners occupies most of the egg waffle shop, almost always a narrow, no-seat storefront. The shop owner tends a few batches at the same time, pouring batter into cast-iron molds, flipping the molds (which resemble waffle irons, but punched with round divots) every two minutes or so, and occasionally opening them a crack to check doneness. When a batch is done, they peel the waffle off the mold with a spatula, loosely fold it in half, slide it into a brown paper bag, and hand it to the customer. You don’t eat an egg waffle. You pick at it, literally. Pluck a bubble off the sheet and pop it into your mouth. It is milky, mildly sweet, not unlike a regular waffle but slightly airier in texture.

After a semester in Hong Kong, I went back to Beijing, finished college, and moved to New York. Egg waffles, along with milk pudding and curry fish balls and the rest of my life in Hong Kong, became an afterthought. Sometimes photos of it would sneak into my social media feed, a bubble-wrap-shaped sheet of waffle in a brown paper bag, against the background of crammed street signs iconic in Hong Kong. Occasionally, some food blog would write about a new dessert shop in Beijing or Shanghai selling “authentic Hong Kong egg waffles.” But the snack remained largely unknown in mainland China.

The breakthrough came in 2014, when Nicolas Tse, a Hong Kong actor, featured the snack in his food show. In one episode, aired to millions across China, Tse sampled egg waffles at various sellers, interviewed the owner of a 60-year-old shop, and created a spectacle cooking egg waffles with three thousand fans in scorching summer heat. Almost overnight, the humble egg waffle was transformed from a niche Hong Kong snack to a phenomenon that everyone suddenly wanted to experience. Egg waffle shops mushroomed across the country.

It took no time for chefs and cafe owners to go rogue with their recipes. Matcha, chocolate, and oreo flavors are only first steps. The bubbles on the waffle can be “molten,” filled with melted cheese, or chewy, stuffed with tapioca pearls. Some shops advertised mille-feuilles with egg waffle layers, or sandwiches with egg waffle bread. Each new iteration would start a mini social media frenzy, at least locally, but at the culmination of the hype is the now-iconic egg waffle ice cream cone — a giant ice cream ball, sometimes two, sitting inside a fat waffle cone, with lashings of nutella, a copious amount of crunchies, and maybe a cookie on top. One can never be too indulgent. 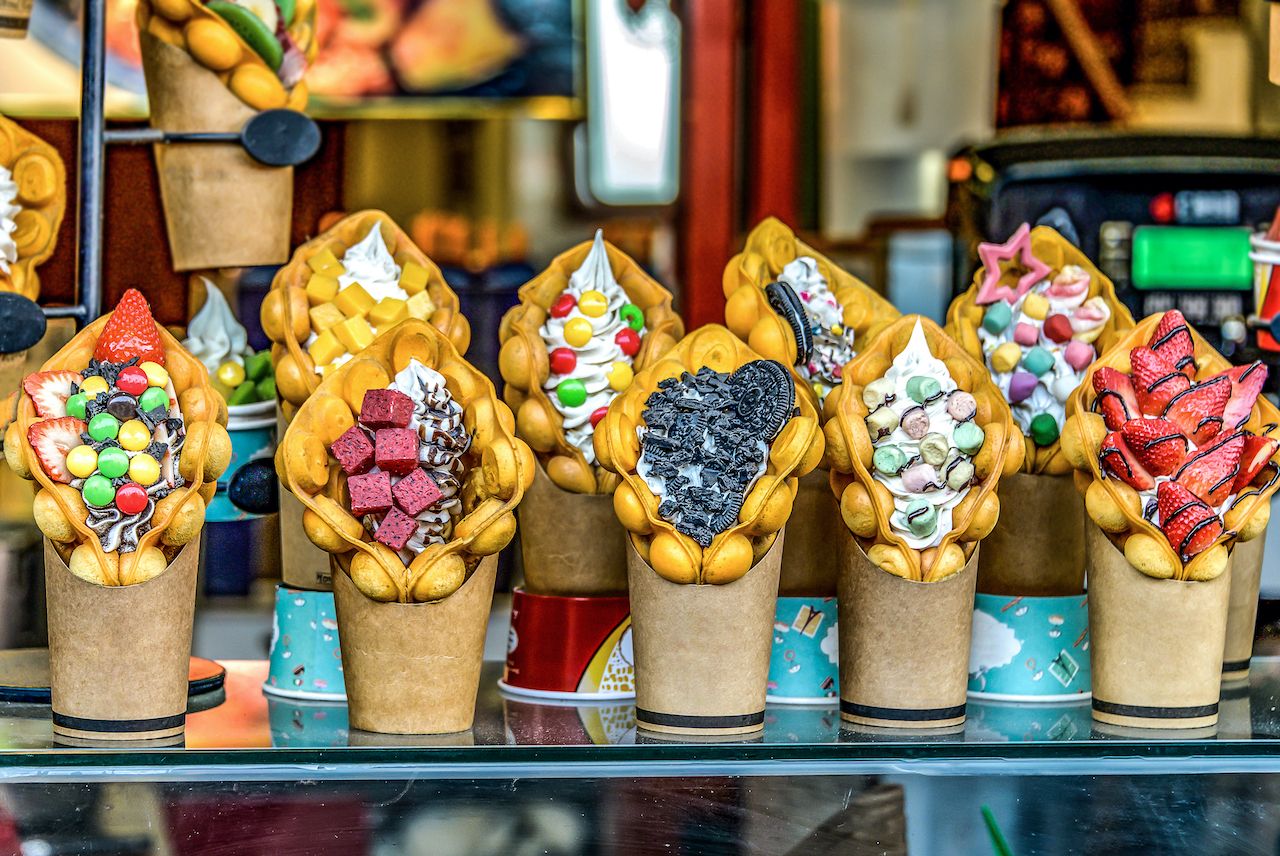 Given all the social media fanfare, it is no surprise that new-generation egg waffles eventually made their landing on the other side of Earth. Since 2015, egg waffle shops have popped up in cities such as London, Melbourne, and Toronto. In New York, I remember Chinese food blogs excitedly announcing the opening of an egg waffle shop called Eggloo in Chinatown. Essential to the posts were, of course, photos of extravagantly garnished egg waffle ice cream cones.

“Sometimes there is a line around the block. And she was very nice to our kids,” Tan recalls. The lady has long retired, but the memory has stuck with him. “My friends remember her too,” he said. “It’s something in the community.” 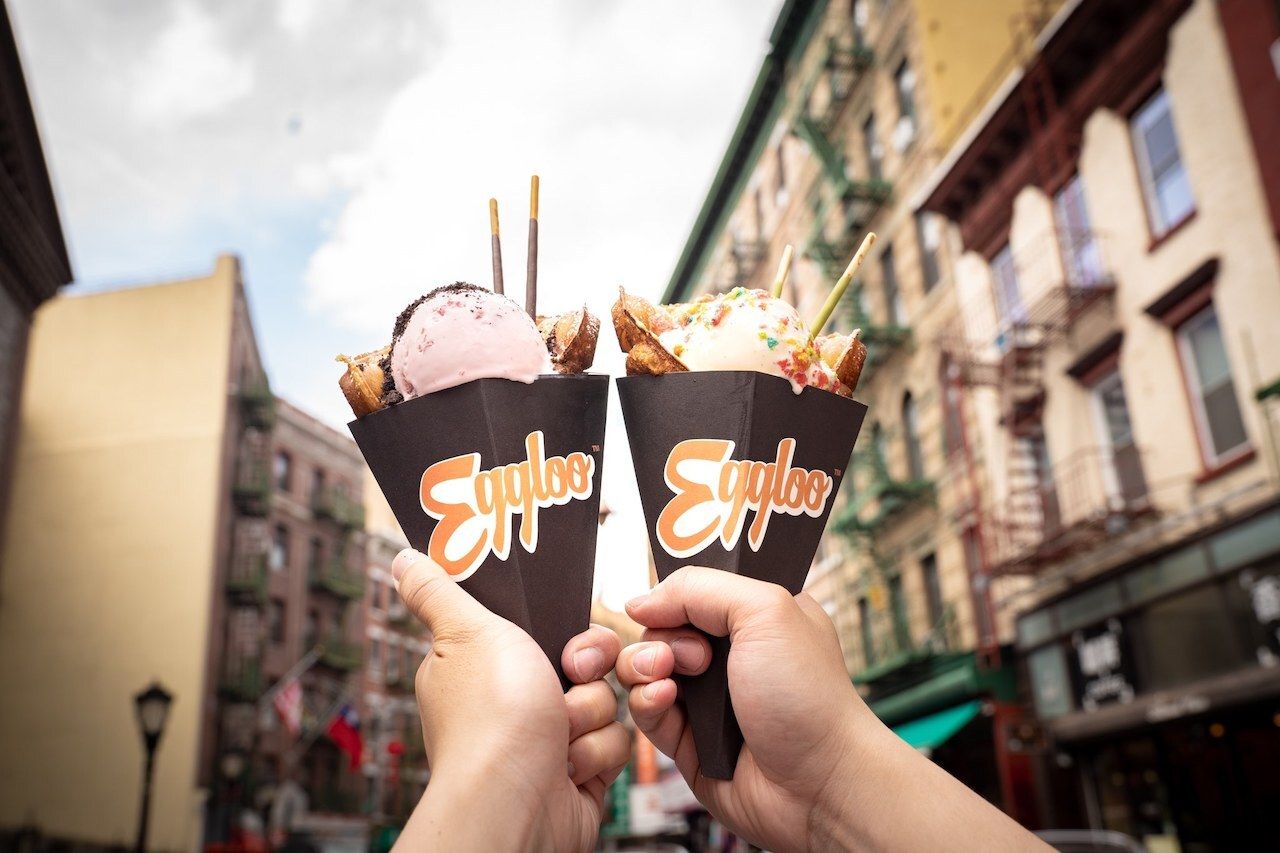 So when he and his friends opened Eggloo at a small storefront in the neighborhood in 2015, Tan felt that he was “doing something for Chinatown.” There is a tiny problem, however. The menu felt too simple if only plain egg waffles were sold, so the idea of pairing egg waffles with ice cream came naturally. It looks great on Instagram. Word spread, and customers flooded his shop.

“We have a diverse customer base,” Tan told me. Among them are Asian Americans nostalgic about their childhood snack, Chinese Gen Zers, thrilled to find the trendy dessert at home in their adopted country, and those who have never heard of egg waffles but are drawn by the shop’s candy-colored Instagram grid. For first-timers, the dessert is “experiential,” as Tan puts it. People try the food, pose for the photos, and learn about its history as a popular street food in Hong Kong.

The rise of egg waffles coincided with an overall boost in interest in Chinese food in the Western restaurant scene, partially fueled by rapid growth in the number of young Chinese students in the United States (the number tripled between 2009 and 2019). I myself have felt it too. Unlike ten years ago when local Chinese food options largely consisted of Cantonese (dim sum) and Shanghainese (soup dumplings), now niche regional Chinese dishes can be easily found on the Upper West Side and West Village, where Chinese college students congregate.

The pandemic, of course, has once more reshuffled the industry. With few tourists and almost zero incoming Chinese students, businesses in Chinatown have been hit hard. Eggloo closed its brick-and-mortar store temporarily, and switched to selling egg waffle kits and mixes online. Mike, however, tries to see it in a more positive light.

“We were already thinking about [selling mixes] before. The pandemic only accelerated the process,” he says.

In a broad sense, his process — inventing new recipes and marketing them through social media — is not dissimilar to the transformation of egg waffles in mainland China earlier. It’s about how food cultures transform and evolve in the internet age. It’s also a story of businesses trying hard to adapt, survive, and thrive in an ever-changing world. When the refugees who created the egg waffle arrived in Hong Kong from the mainland, they gave all they had to build new lives, with creativity and resilience. Ultimately, the dish they created launched a globe-spanning phenomenon that captured the world’s attention, solidifying the egg waffle as a formidable symbol of Hong Kong’s culinary influence over the rest of the world.

Food + Drink8 Essential Types of Dim Sum To Eat in Hong Kong
Tagged
Dessert Hong Kong
What did you think of this story?
Meh
Good
Awesome