When Ari Karjalainen, the CEO of Aurora Powertrains, saw the first electric cars come to market, he knew he had to bring this technology to snowmobiles.

“I thought, why not make an electric snowmobile? [Regular] snowmobiles cause pollution and noise,” says Karjalainen.

A senior lecturer at Lapland University of Applied Sciences in Rovaniemi, Finland, with an electrical engineering background, Karjalainen was well-placed to design an electric vehicle that could withstand a harsh Arctic environment, including the challenges of making it snow-proof.

In 2017, Karjalainen and his team succeeded in creating an electric snowmobile — which his company calls an eSled. The appeal for travelers visiting the Arctic was immediately clear. 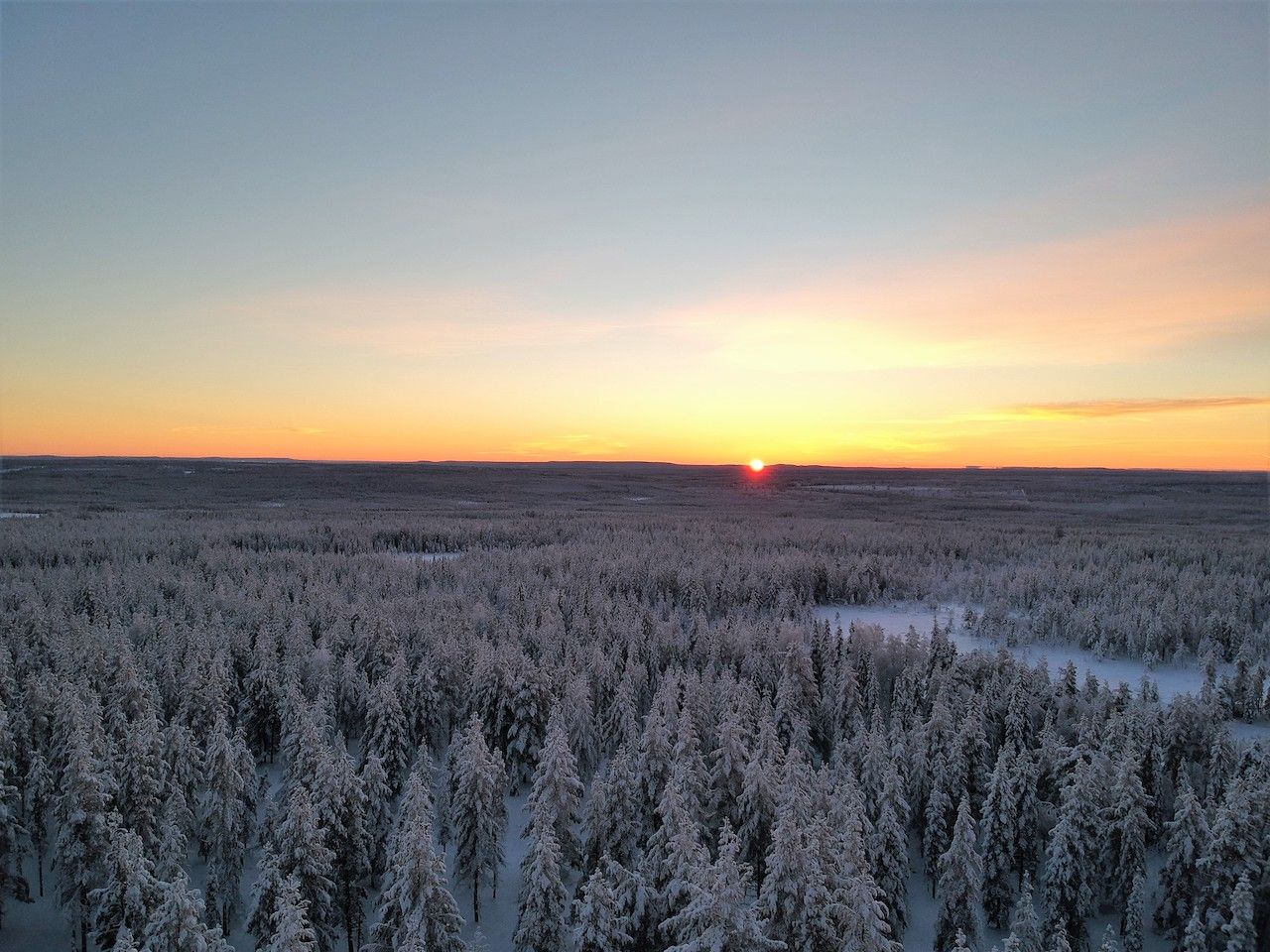 In the Arctic winters, the stillness is unlike anything most of us experience in our daily lives. Adding the roar of a combustion engine not only disturbs wildlife, but it also diminishes the experience of being in the silent, frozen wilderness.

When people who’ve ridden a regular, noise-generating snowmobile get on an eSeld, though, Karjalainen says their first question is usually, “‘Is it on?’” Like turning on a light, an electric vehicle doesn’t whirr or roar. Karjalainen adds, “That is the key point: There is no noise.”

Add to that the absence of exhaust and emissions-generating pollution, and the appeal for anyone wishing to explore the pristine wilderness of Finnish Lapland — or other Arctic destinations — is clear.

Last year, in the winter of 2018-2019, Karjalainen and his partners began offering safaris to chase the northern lights and experience the wilderness of Finland’s Arctic reaches through a company they set up called Aurora eMotion. As the season continued on, they saw ever more travelers sign up for their unique tours.

In February of last year, Aurora eMotion also partnered with the Swedish energy company Vattenfall to offer eco-friendly transportation, using their eSleds, during the Alpine Ski Championships in Åre, Sweden.

Taking eSleds to the far north 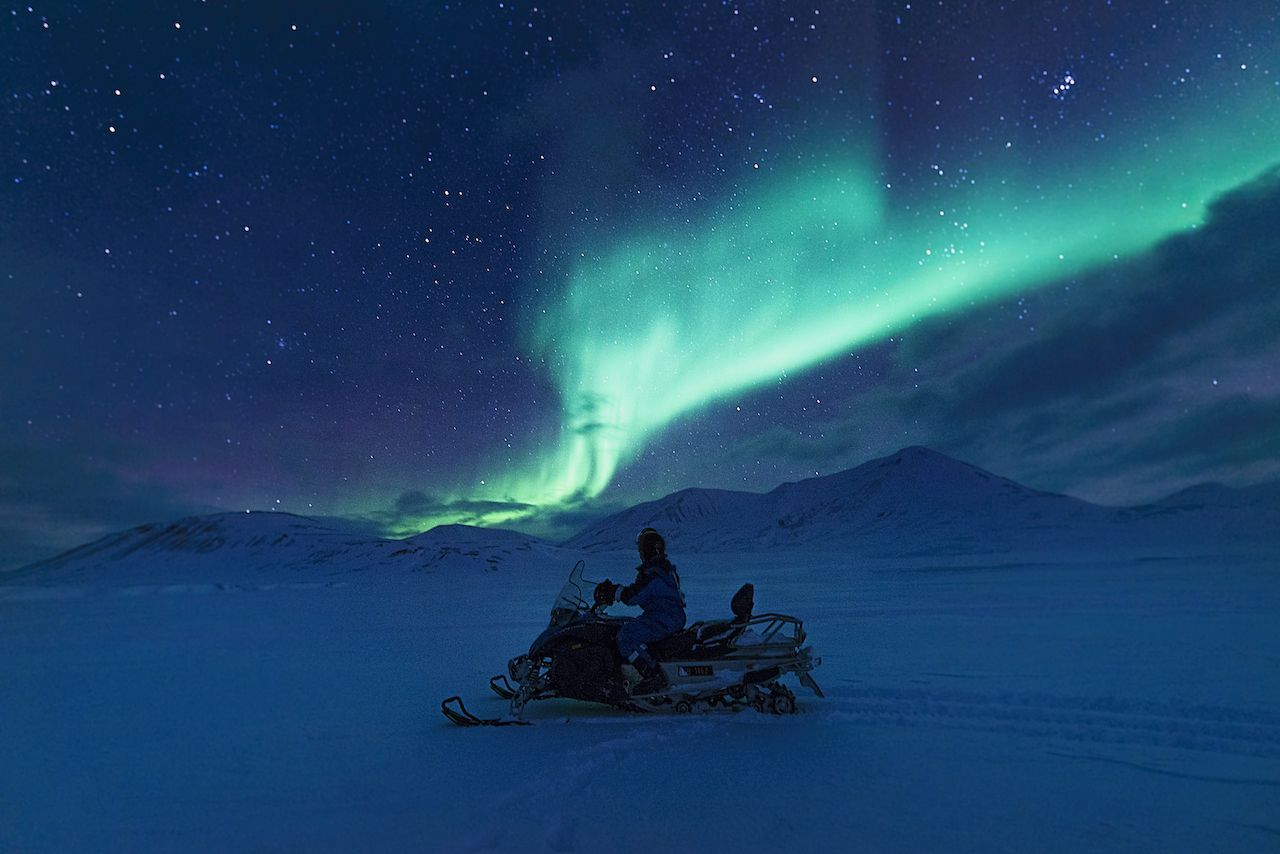 Neighboring Norway took notice. The cruise company Hurtigruten had been looking for a more environmentally friendly way to offer tours in Svalbard, an archipelago of Norwegian islands that’s over 1,200 miles from the mainland and a mere 650 miles from the North Pole.

They ordered a fleet of eSleds, turning Aurora Powertrains into “an export company,” says Karjalainen with a bit of a laugh.

On Svalbard, the eSleds bring the added benefit that the electricity used to power them comes from sustainable sources. The electricity is generated by wind power in winter and by solar power during the endlessly sunlit days of summer.

And they are still so quiet.

Those Svalbard trips can be booked through Off the Map Travel, a UK firm specializing in uncommon, environmentally conscious travel. “A lot of people talk about the silence of the Arctic,” says Johnathan Cooper, Off the Map’s founder and CEO. Cooper adds that when you can experience that silence without the hum of a regular snowmobile, “… you get a much better connection with the wilderness and the nature you’re in.” 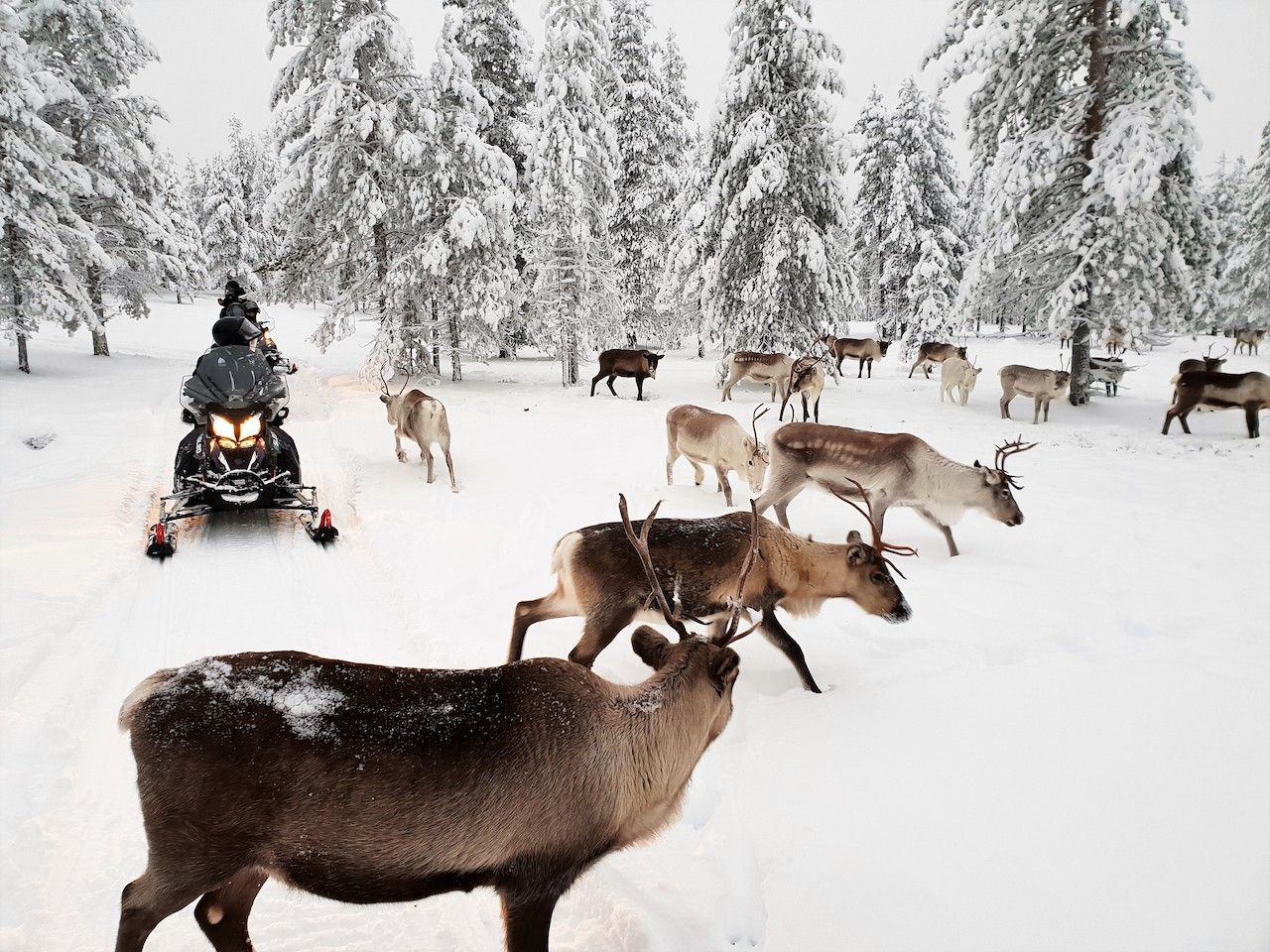 Cooper also notes that, beyond the ecological benefit of not using petrol-, or diesel-, powered machines, and the lack of an engine’s roar, you have a much greater chance of spotting wildlife — from Arctic reindeer to ptarmigan birds or Arctic foxes.

The same is true in Finland. “We had an experience, when we came to the forest, there were some reindeer. Those reindeer starting walking beside the eSleds. They weren’t afraid at all. It was a very wonderful experience,” recalls Karjalainen.

Moreover, he says, guides can more easily talk with visitors, and visitors can enjoy the moment together. A couple sharing an eSled can talk with one another, something that’s impossible on a thunderous traditional snowmobile.

Karjalainen also designed the electric snowmobiles to be easier to use. They don’t accelerate as fast as regular snowmobiles, making them safer for first-time riders.

The eSleds have a range of about 20 miles, which is plenty of distance for Aurora eMotion’s tours — which typically travel about 10 to 15 miles in the three hours that they are exploring the wilderness or searching out the glow of the aurora borealis. There’s also a five-hour tour, but it includes two hours at a nearby husky farm, so the distance driven is the same.

Electric snowmobiles combine the benefits of snowshoeing with the ability of a traditional snowmobile to cover longer distances, Karjalainen says. It’s the magic of really feeling at one with the forest while going deeper into the woods than your own two feet could take you. 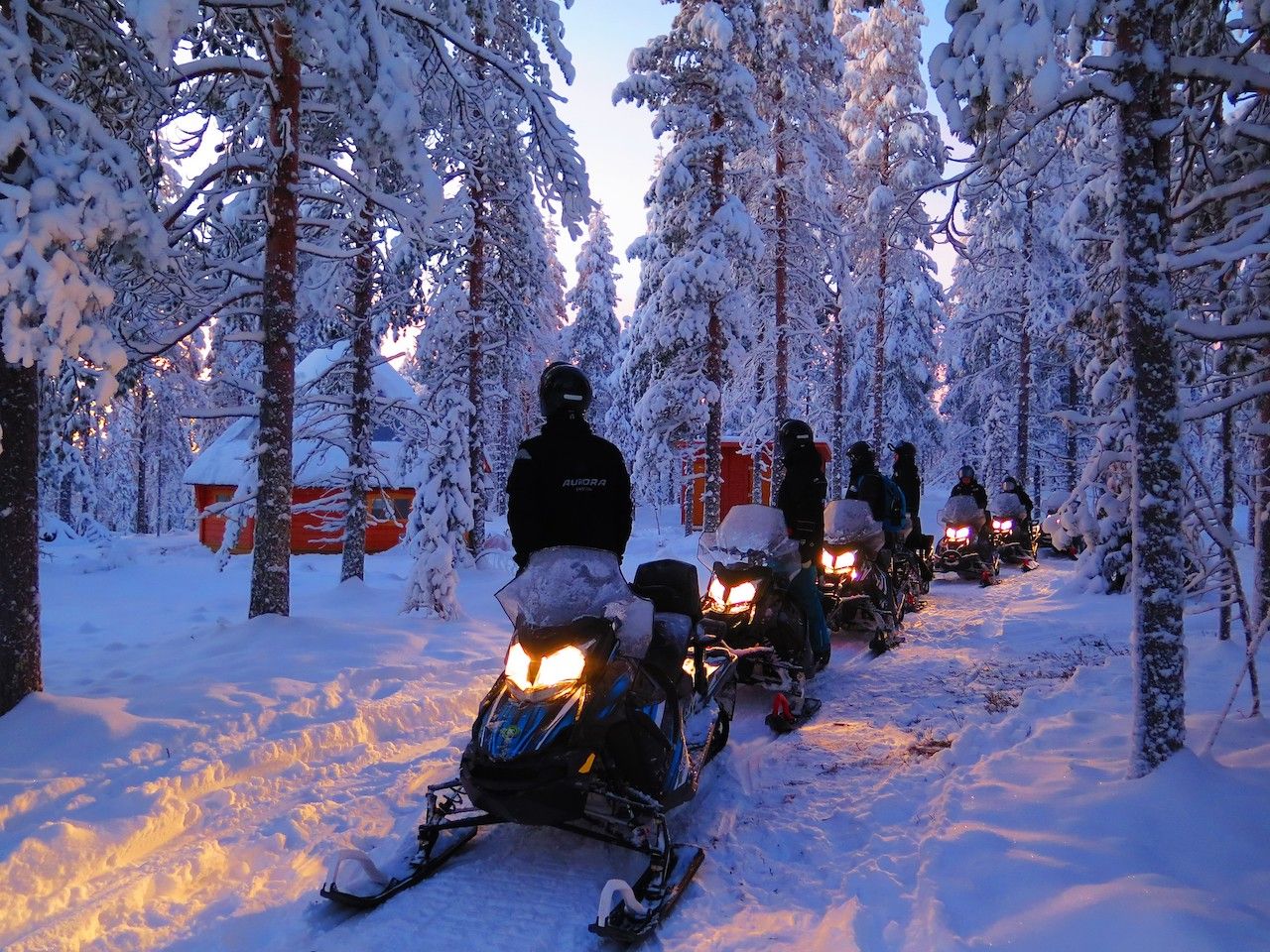 Aurora eMotion tours depart four times daily and offer such highlights as stopping in a hunting cabin deep in the forest to enjoy hot drinks, cookies, and sausages grilled on the fire. Prices run from €119 per person to €179 per person, depending on the time of day. Prices are higher for the husky farm tour.

They operate near the Arctic Snow Hotel, where accommodation options include staying in a hotel literally made of ice or cuddling up inside glass igloos, so you can gaze at the dark Arctic sky and seek out the aurora borealis.

The Arctic Snow Hotel even has a sauna made entirely of ice (yet another crazy sauna) for those who really like the contrasts of extreme temperatures. Or, if you’re traveling with family, you could add the Aurora eMotion trip onto a visit to Santa’s Village or many of the other things that make Rovaniemi a winter wonderland.

On the other hand, if you want to get way, way off the grid, Off the Map Travel’s Green Aurora trip in Svalbard is an all-inclusive experience over four days. It includes airport transfers from Longyearbyen Airport, cozy lodging, meals, and of course, time on the eSleds under a sunless Arctic sky. The cost is 1,200 British pounds (US$1580, at today’s exchange) per person, exclusive of airfare. 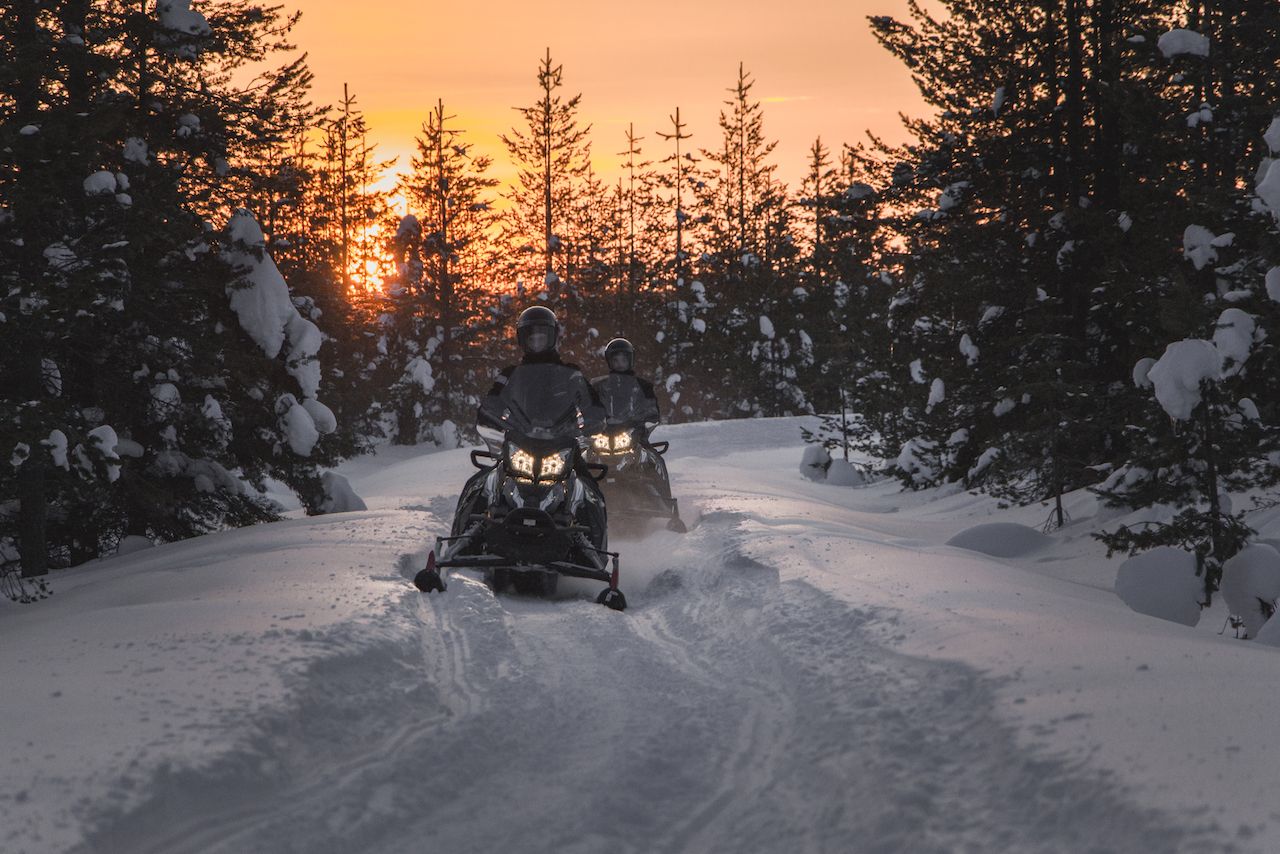 This winter, there aren’t too many other ways to enjoy the sensation of riding an electric snowmobile through the snowy northern silence. You can’t yet buy an eSled as an individual since Aurora Powertrains is currently only selling them to green tour operators.

The only other places you could drive an eSled this winter would be at Sunday Morning Resort in Pyhä, which has eSleds available for guests to use. It’s also near the Pyhä Tunturi ski resort that’s one of the places we’ve recommended to ski and seek out the northern lights at the same time.

Given the rapid progression of electric vehicles, there is little doubt that more electric snowmobiles will be coming soon. Some people might want the roar of an engine. But most people would rather not pollute and disturb the natural environment they’ve come to explore.

As Off the Map Travel’s CEO Cooper says of electric snowmobiling, “It combines the benefits of other outdoor adventures, where you’re in the environment and you can enjoy the sound of silence, with the ability to travel over greater distances and the thrill of going through the wilderness.”

Or, as Karjalainen notes more succinctly, “Tourists are here for the nature.” An electric snowmobile ensures they can really experience it.

OutdoorFinland’s ‘Everyman’s Rights’ Offer the Most Open Access To Nature on Earth
Tagged
National Parks Ski & Snow Insider Guides
What did you think of this story?
Meh
Good
Awesome