Texting vernacular has come a long way since this form of communication first became a reality. Gone are the days when a person had to use letters, numbers, and punctuation to create a very limited range of facial expressions. Emoticons are still much in use today, but together with the rise of the smartphone, they’ve paved the way for their successors: emojis. Emojis, unlike emoticons, are image-based, which opens up many possibilities when it comes to what they can be of — expressions, actual people, everyday objects, animals, etc. And with a current total of 3,304 emojis in the official Unicode list, and more added every year, those possibilities are ever-growing.

The history of emojis

The first emojis came into the picture in 1999, created by Japanese designer Shigetaka Kurita for the telecommunications company NTT Docomo. The company was looking for a way to make communication easier in the face of a short character limit, particularly with pagers. Because Kurita had to work within the limited space of a 12-by-12 grid, his emojis had a low resolution that made them look pixelated.

His inspiration for the 176 emojis he created came from several sources. Besides the need for icons that would make business communication easier, he also took from popular culture in Japan. In an email interview with CNN in 2018, Kurita said, “In creating emoji, I found inspiration in pictograms, manga, and all sorts of other sources.” In his original set you’ll see emojis that can be used for various business purposes, such as an ATM, email, fax, and a generic building, but you’ll also see an emoji for a hot spring, a video game controller, and the 12 zodiac signs.

In a fitting nod to its origins, the word emoji comes from the Japanese kanji for e (絵, meaning “picture”), mo (文, meaning “write”), and ji (字, meaning “character”).

The evolution of today’s emojis 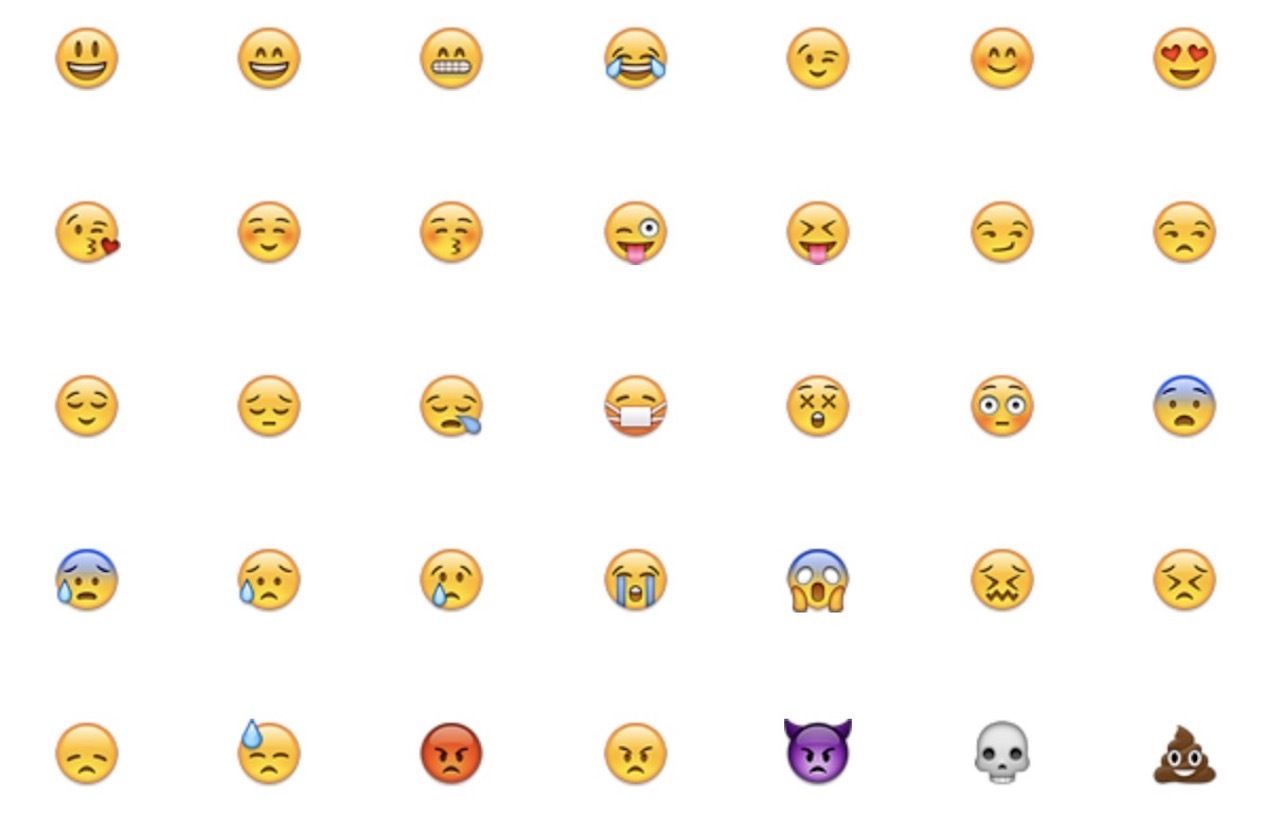 While the emoji has existed since 1999, it did not become popular elsewhere in the world until a little after 2010 when they were officially integrated into Unicode, the universal code for all text language.

The first set of today’s emojis was released that same year on iOS devices. Android was a little late to the game, beginning support for emojis in 2012. It’s worth noting that while these operating systems share many of the same emojis, like the laughing and crying faces, the emojis do not look the same across different platforms. Once an emoji is approved, each member of Unicode — Apple, Google, Microsoft, etc. — design their own versions.

The “face with tears of joy” emoji on different platforms. From left to right: Apple, Google, Microsoft, and Samsung. Photo: Emojipedia

The first emojis are well-known, like the face with tears of joy, the ghost, nail polish, the woman dancing, and a flame. Although fun and much-loved, the first emojis available lacked cultural, ethnic, and gender diversity and did not fully represent the population of smartphone users. 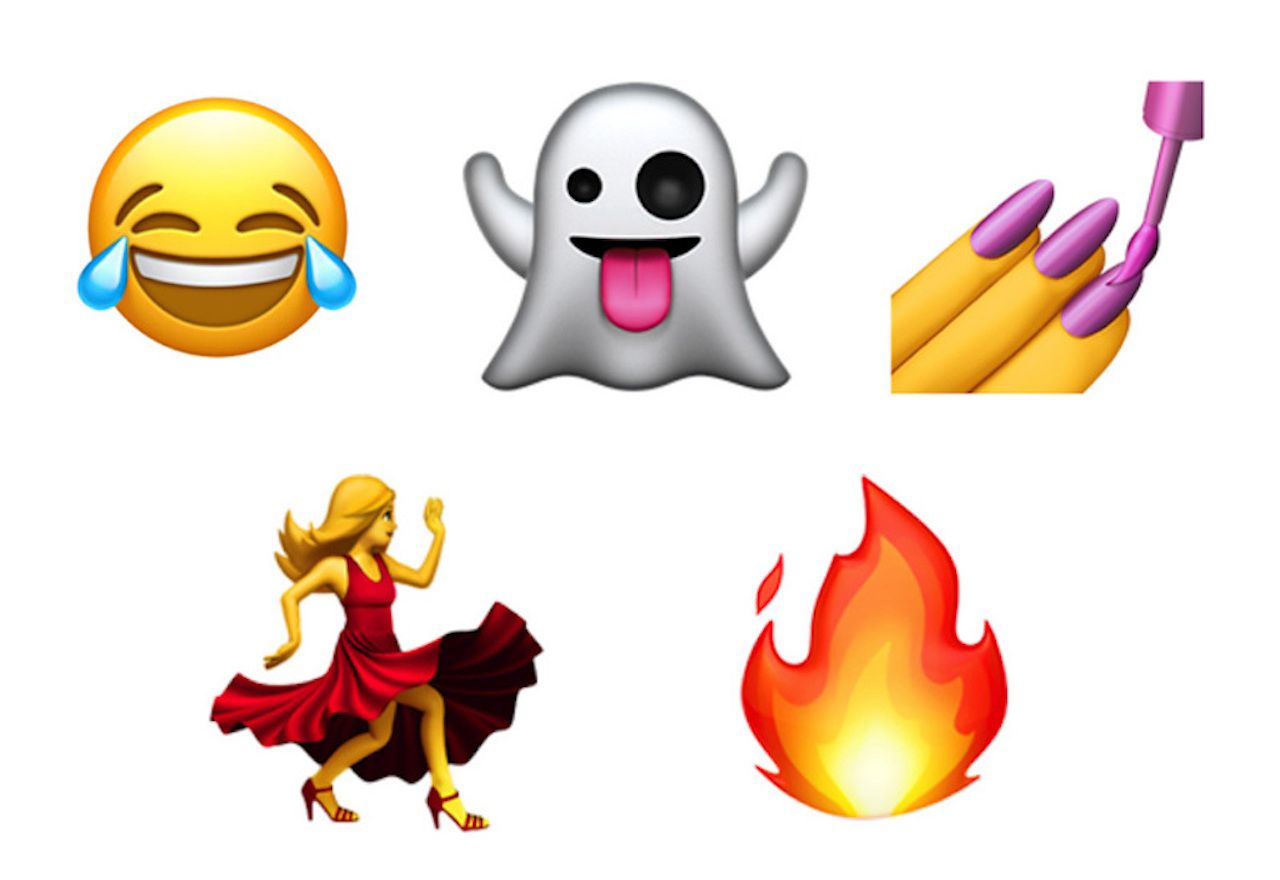 Some of the first emojis released.

As more people used emojis, this lack of representation was questioned — some country flags were not included, and a variety of skin tones was non-existent. Emojis represented a wide range of topics but cruelly lacked diversity at the same time. It was only in 2015 that emojis diversified; the option to change the skin tone of certain emojis was added, with five different options, as well as emojis for same-sex couples. 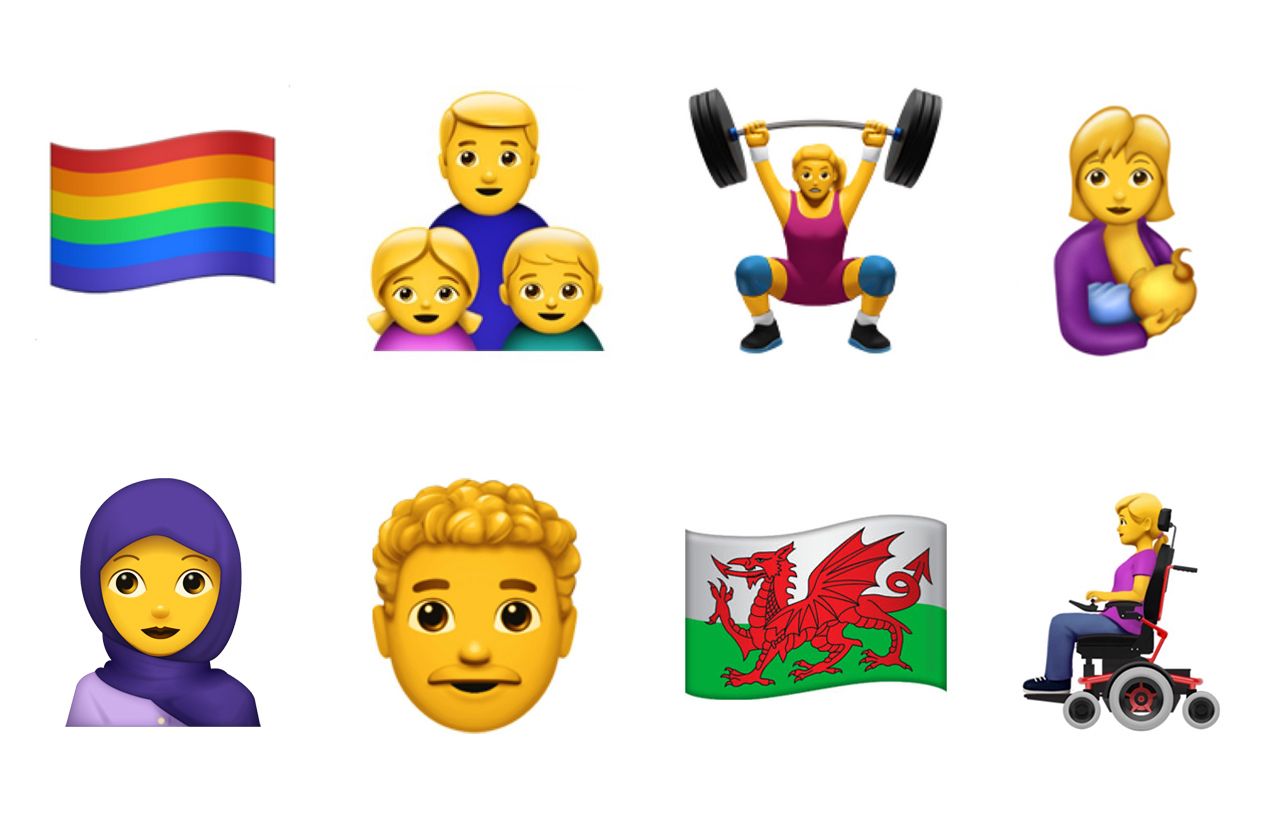 Emoji additions through the years.

From there, it’s been on the up and up. Every year sees the Unicode Consortium adding new emojis to the current list, as a new version of the Unicode standard is released annually. In 2016, highlights of added emojis were the pride flag, a single father, and a woman weightlifting. 2017 saw mythical creatures added, but it also saw gender-neutral options, a person breastfeeding, a person wearing a hijab, and individual flags for the nations within the United Kingdom. 2018’s new emojis included options for different hair types and colors. And last year’s major update saw representation for people with disabilities.

A bright future ahead 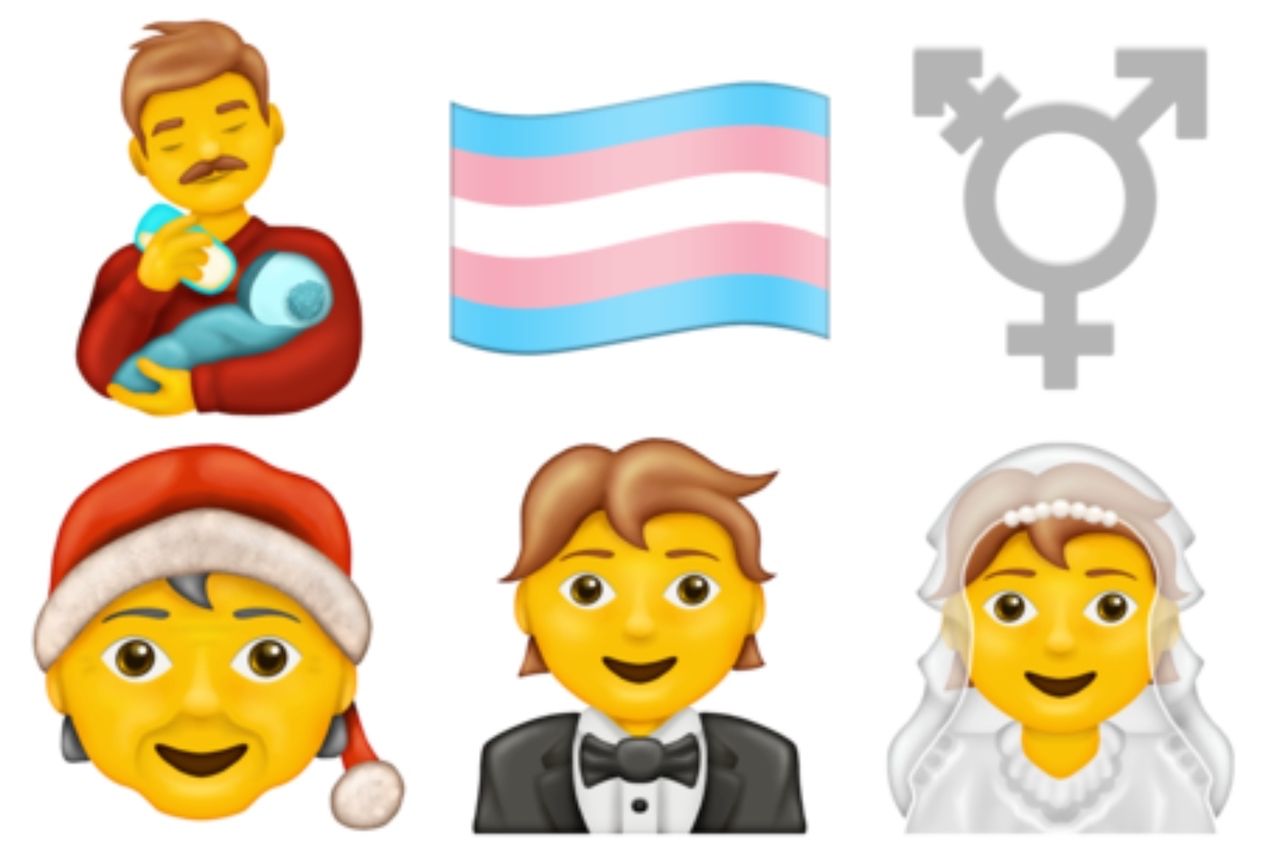 The 2020 list of emojis has been finalized, and the 117 new additions will be rolled out throughout the year; these include even more gender-neutral options, such as people in wedding attire, a person bottle-feeding a baby, and a gender-neutral partner to Santa Claus. There’s also more cultural variety; in terms of food, there’s a tamale, fondue, and bubble tea, and besides that, there’s a boomerang, long drum, and piñata. 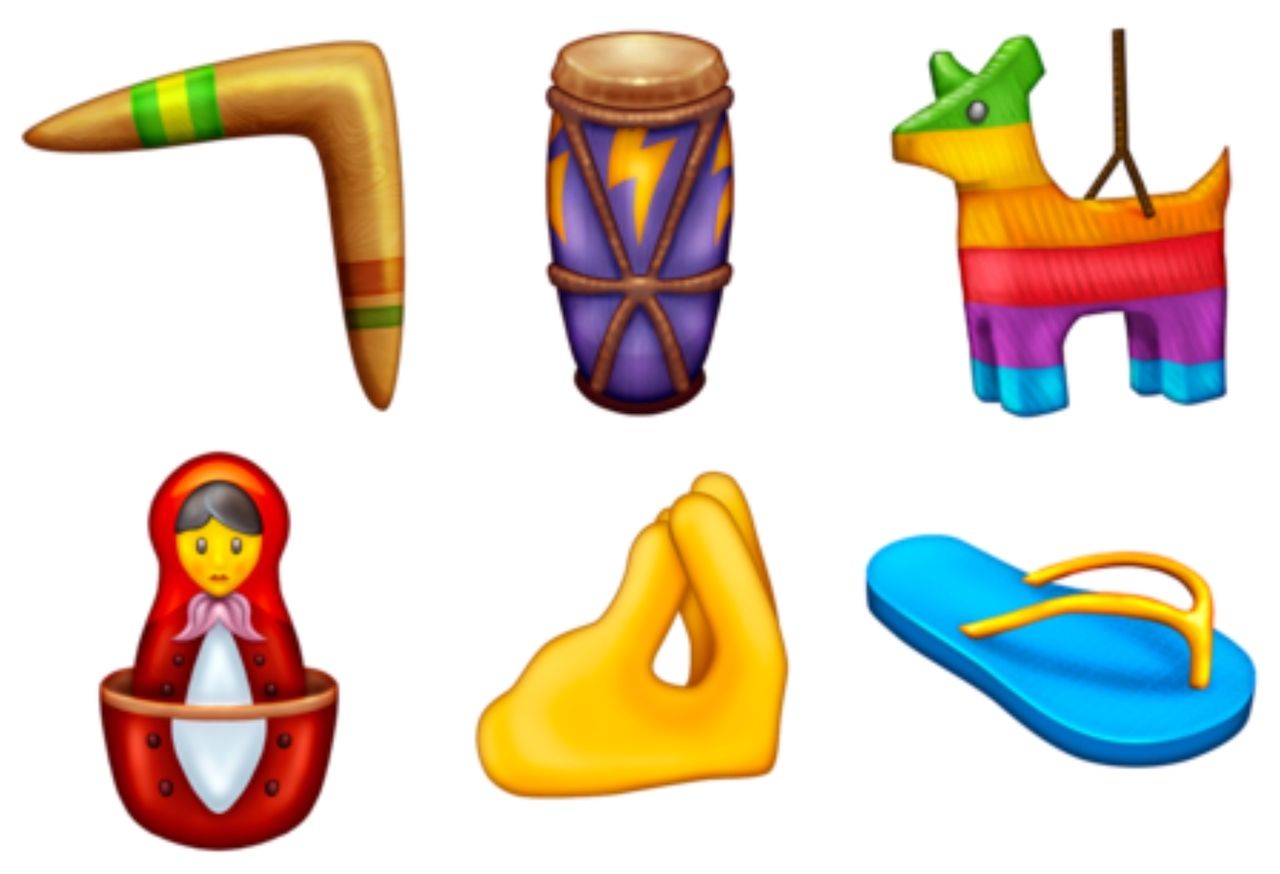 Even with this year’s list set, the consortium is already working toward the future. Typically, the deadline for proposals for new emojis must be submitted by March 31 to be considered for inclusion in the following year’s list.

However, as with a great many other things, this year, the process has been affected by COVID-19. Due to the health crisis, there will be no new emojis released in 2021 as the schedule will be pushed back. Mark Davis, Unicode Consortium president, said in a statement, “Under the current circumstances, we’ve heard that our contributors have a lot on their plates at the moment and decided it was in the best interests of our volunteers and the organizations that depend on the standard to push out our release date.”

The silver lining is that designers have until September of this year to submit proposals for new emojis (emojis designs are crowdsourced; anyone can propose new emojis). Additionally, while no new emojis will be released next year, there is still a possibility that new emoji sequences will be released. (Emoji sequences are, essentially, a particular emoji with multiple iterations such as one with multiple skin tones or hairstyles and colors.) 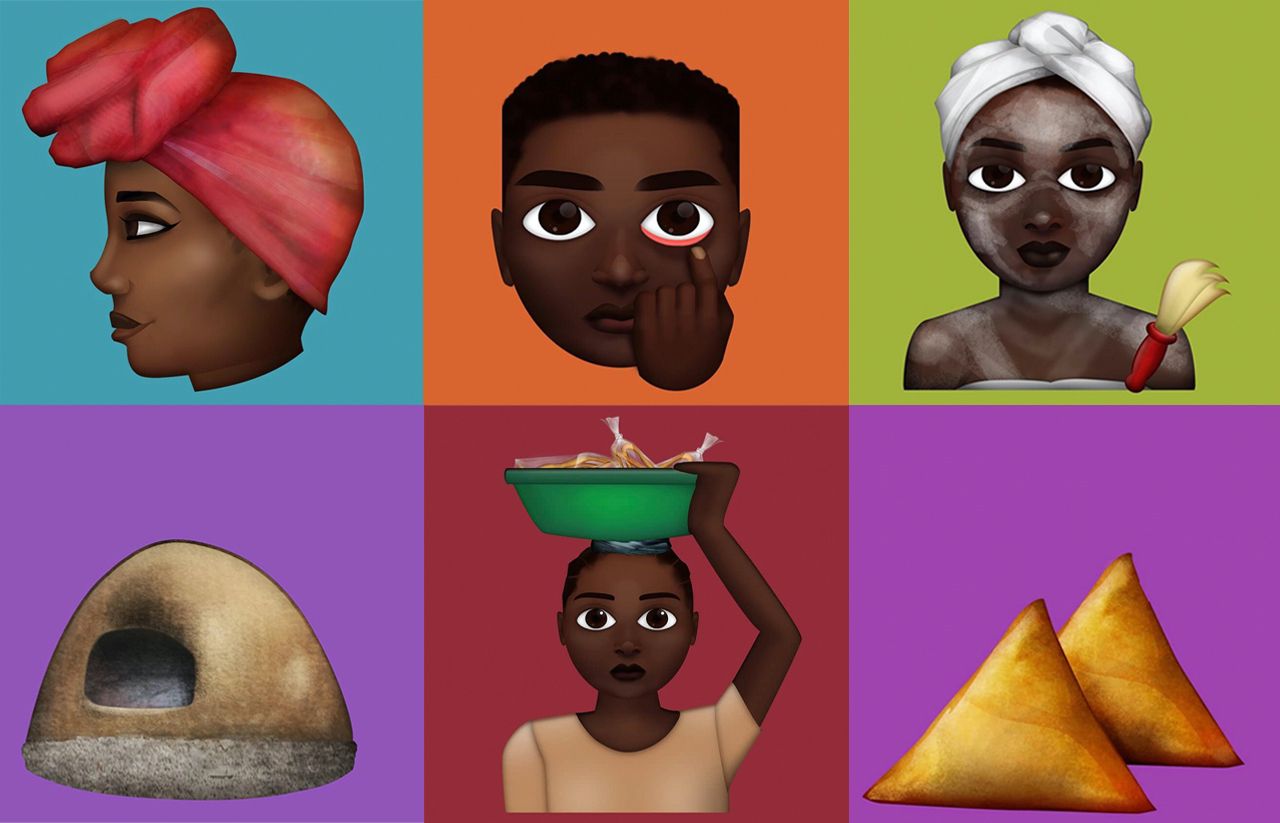 While emojis have made strides in terms of diversity, there’s always more that can be done. There are still a ton of cultures that are not represented, whether it’s through emojis of people, food, activities, or inanimate objects. Anyone can start working on their proposal for future emojis, but innovative creators like O’Plérou Grebet are filling that void while we wait.

Grebet, a 22-year-old graphic design student from Ivory Coast, created 365 emoji-like stickers depicting the daily life and culture of Ivory Coast and other African countries in 2018. They depict food items like mashed plantains and cassava, traditional cookware, instruments, traditional garments, as well as local facial expressions, among many others.

These stickers are available on his app, Zouzoukawa, which can be downloaded on both iOS and Android phones; the word zouzoukawa means “image” in Bété, one of the languages spoken in Ivory Coast. They can be copy and pasted and used as emojis in messenger apps like iMessage and Whatsapp; there’s even an option to add the stickers to the sticker portion of the Whatsapp keyboard for quick access.

Ever the forward-thinker, Grebet is working toward getting some of his emojis included in the Unicode standard and has already personally submitted proposals for some, such as the “I told you so” one (photo below). He plans to create even more emojis, this time from other parts of Africa, such as the north, central, east, and south, when he’s able to travel again to do cultural research after the pandemic is over, he tells Matador Network.

Then there are organizations like Emojination that are pushing for more inclusive emojis by assisting in the submission and review process. Emojination has successfully helped get the dumpling, hijab, sauna, red envelope, broccoli, and DNA emojis into the official list, but it’s not stopping there. On Emojination’s website is a list of active ideas that the group is working on, which include a plate of plantains, beans, a durian, a pyramid, a dashiki tunic, and incense. 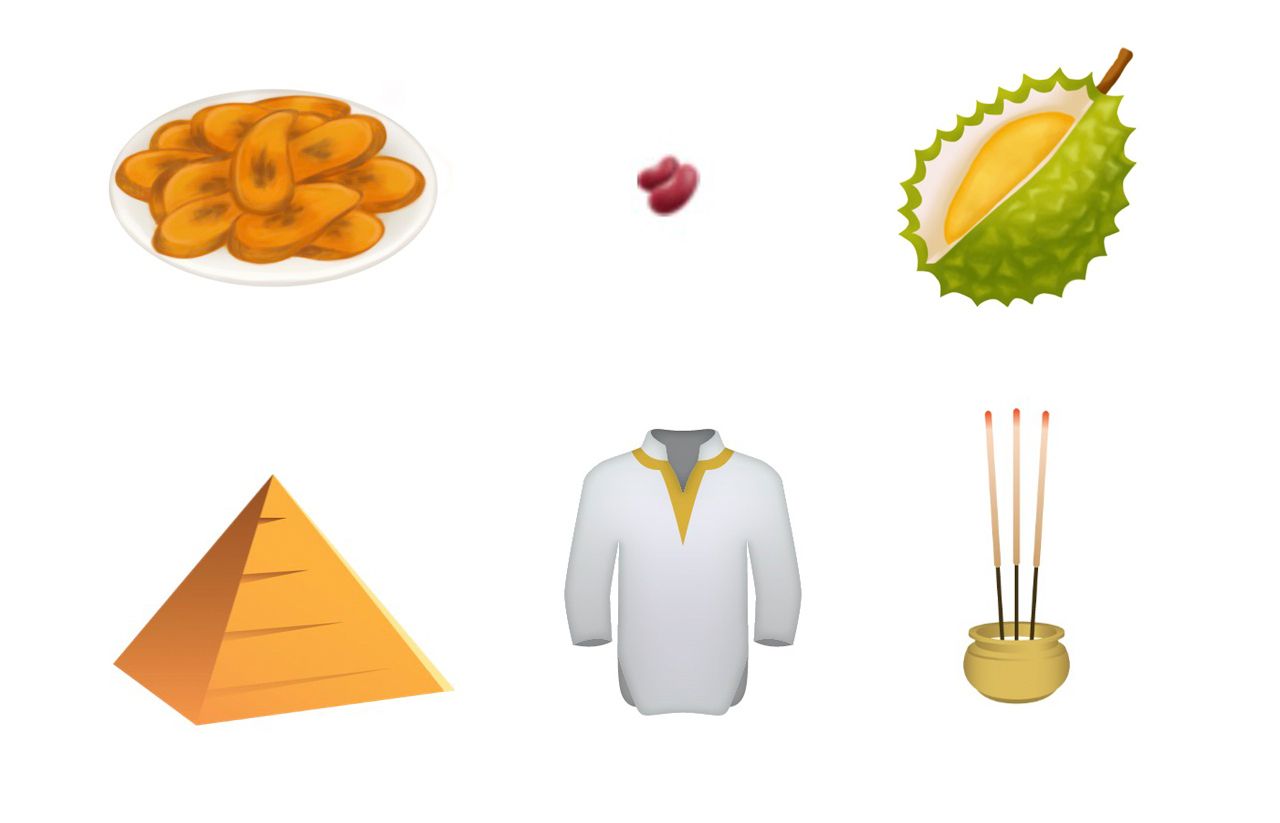 Active emoji ideas, the designs are not final. Photo: Emojination

We can only hope that our phones will provide as much cultural diversity as possible in the years to come because we’d love to have a way to express our love for Senegalese thieboudienne, our fondness for the Asian squat, and the delight that is hummus.