There are national flags, colors, songs, fruits, dances, and instruments. But arguably the national symbol that most people care about is none of those things. It’s the national animal that gets all the love and interest. Some national animals are well-known as the country’s symbol, such as the United States’ bald eagle. Others are less so, like Uganda’s grey crowned crane. A study by Vouchercloud mapped out every country’s national animal and its conservation status, and the results are surprising.

Mammals come out on top, with 120 of 185 countries picking a mammal as their national symbol. Birds are the next choice, with 52 countries choosing the winged animals. Reptiles only make up three of the world’s representatives, while only two fish and one amphibian make the cut. Rounding out the bunch is a cool, albeit unanticipated, group: mythological creatures. These fabled creatures take seven spots, including a unicorn for Scotland, dragon for Wales, and a white stallion for Burkina Faso.

While some of these animals inspire heart eyes and make us say “aww,” it’s not all rainbows and sunshine. Wildlife conservation as of late seems to be a game of two steps forward, and one step backward, and the national animals are no exception. 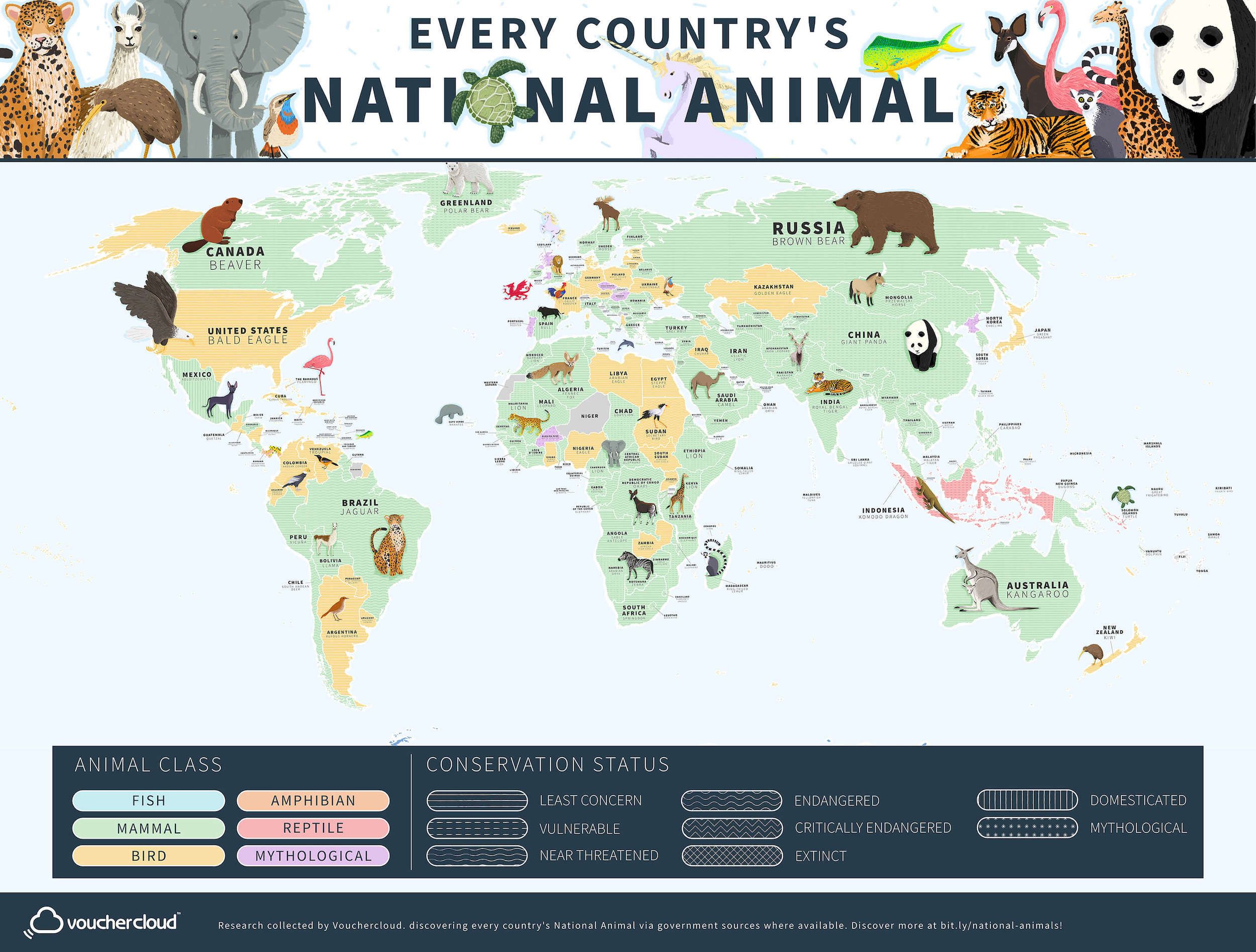 35 of the world’s national animals are “threatened,” with a conservation status of either extinct, critically endangered, or endangered. These include Mauritius’ dodo (extinct), Rwanda’s leopard (critically endangered), and New Zealand’s kiwi (endangered). Another 48 of these animals are “vulnerable,” such as China’s giant panda, Tanzania’s masai giraffe, and Bulgaria’s lion, which means their numbers as susceptible to being threatened and endangered if the problem gets any worse.

Some animals are not a high level concern when it comes to conservation status — think Botswana’s zebra, Boliva’s llama, and Italy’s grey wolf. But while these animals’ numbers seem to be doing well for the most part, that doesn’t mean they should be ignored. To prevent any further decline in status, every animal needs to be looked after with careful consideration.

NewsCambodia To Stop Elephant Rides at Angkor Wat by 2020
Tagged
Maps + Infographics News Wildlife
What did you think of this story?
Meh
Good
Awesome