ON MONDAY, August 21, THE MOON is going to pass in front of the sun, and all of North America is going to be treated to an eclipse. Eclipses themselves are not too rare, but this one is special: anyone in the long stretch of land between Lincoln Beach, Oregon, and Charleston, South Carolina will get to see a total eclipse. And this does not happen frequently. The last total eclipse in the US was in 1979, and the last one to go coast to coast was in 1918.

Here’s what you need to know for viewing.

What is an eclipse?

At its most basic, a solar eclipse is when the moon casts its shadow on the earth. Every now and then, the moon’s orbit takes it directly between the earth and the sun. The sun is much, much bigger than the moon, but because the moon is so much closer to earth, when it passes between us and the sun, for a narrow, 70-mile wide strip of land, it is able to totally block out the sun’s direct light.

This isn’t that infrequent — it happens somewhere on earth, on average, once every 18 months. What’s rare is to be in a place which is experiencing what’s called a totality. A totality is the narrow strip of land where the sun is totally blocking out the sun’s light. People standing on the ground near this strip can witness one of nature’s strangest, most beautiful spectacles — the moon blotting out the sun, making the sun’s ethereal corona visible.

People outside the areas that can see the totality still get a pretty incredible show — the sun will be at least partially blocked for everyone in the continental United States.

Where do I watch?

The totality will be traveling from west to east through 14 states. It starts in Lincoln Beach, Oregon, and will travel through Idaho, Wyoming, Montana, Nebraska, Iowa, Kansas, Missouri, Illinois, Kentucky, Tennessee, Georgia, North Carolina, and then South Carolina. From there it heads off into the Atlantic.

Note that not everyone in these states will get to see a total eclipse. NASA has provided a map of the totality’s path, and sites like Vox have provided tools that allow you to input your ZIP code and figure out how much of the eclipse you’ll be able to see, and how far you’d need to travel to be in the totality. 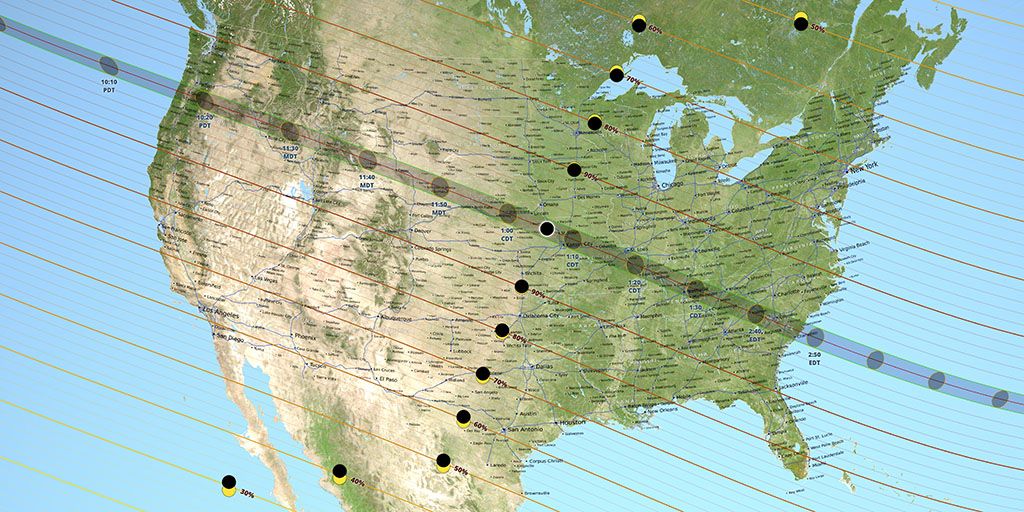 If you can’t travel, as long as it’s a clear day, you’ll still be able to watch a partial solar eclipse from home.

Another particularly cool place to watch is from a plane: there is one Delta flight from Portland to Atlanta that will be traveling in the path of the eclipse while it’s happening, and as of this writing, there were still seats available.

How do I watch?

First: Do not look directly at the sun. You could seriously hurt your eyes. There are a few options for watching the eclipse which won’t damage your eyesight. The best, obviously, is still getting to look directly in some way, and the only way to do this is if you have special sunglasses. NASA recommends viewing with ISO 12312-2 compliant glasses, and the American Astronomical Society offers a list of reputable vendors. Unless your personal sunglasses are compliant, they are not sufficient. You can either buy these glasses online, or contact local science museums, astronomy clubs, observatories or nearby schools to see if they will have any available.

The only time it is okay to not have glasses on is during the totality, in which NASA says it’s safe to take the glasses off and view directly. But, a reminder: the totality only lasts for one to two minutes, depending on where you are, and it is most definitely not safe to view the eclipse unprotected when the totality starts to end.

A second option is to use a projection method. These allow you to look indirectly at the eclipse either through something as sophisticated as a telescope, or as basic as a sheet of paper. The paper method is the easiest and cheapest. Telescopes and binoculars can also be used for projection methods, or they can be fitted with special filters for direct viewing. DO NOT view directly through a telescope or binoculars without the filters.

If, for whatever reason (maybe your boss is a jerk and won’t let you go outside during the eclipse, maybe the weather’s bad, maybe you just forget to run outside during your lunch break), don’t worry: the next time the US will see a total solar eclipse is actually not that far off. There will be a total eclipse visible from Texas to Maine in April 2024. The next coast-to-coast eclipse, however, won’t be until 2045.

Maps + InfographicsMapped: The Best Spots To See the 2017 Solar Eclipse
What did you think of this story?
Meh
Good
Awesome