Just because summer’s coming to a close doesn’t mean you have to give in to post-summer blues. There’s still plenty of things to do and places to see. Whether you’re a New Yorker searching for an autumnal escape or a visitor looking to experience more of the wider New York State area, here’s our list of the five best fall getaways from New York City — and the best part: all the locations are just a Long Island Rail Road, Metro-North, Amtrak, train, or bus ride away. 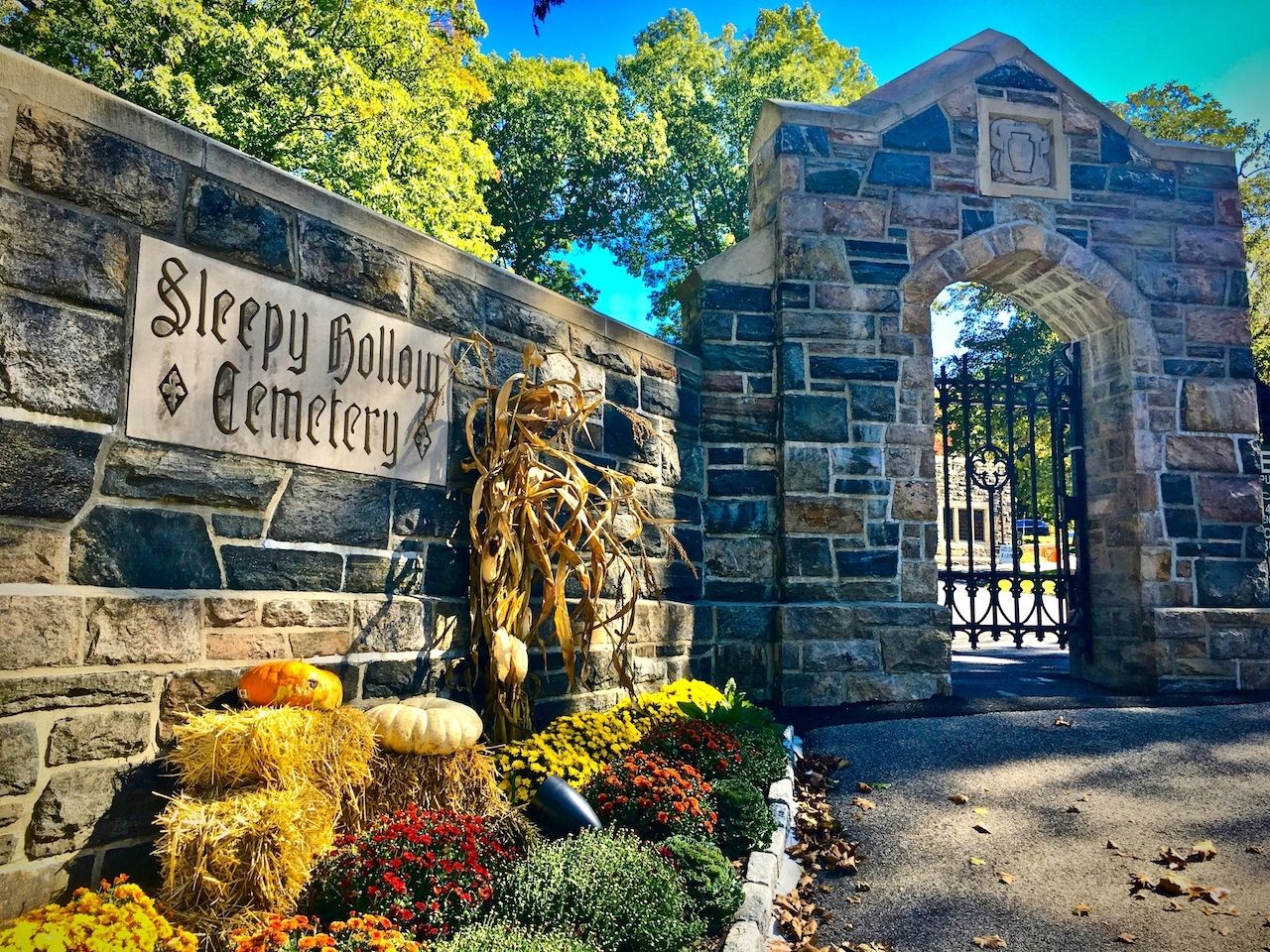 We go nuts for Halloween in the US. So, it goes without saying that a town that’s the setting for Washington Irving’s novel The Legend of Sleepy Hollow embraces its true calling and spooky nature with fervor. Maybe it’s the orange, red, and brown foliage found all over; the scarecrows tied around every lamppost; or the pumpkins and hay bales decorating sidewalks, storefronts, and stoops. But, spending a night or two in this part of the town of Mount Pleasant is a surefire way to immerse yourself in the spirit of Halloween. While you can visit anytime during the fall, visiting around Halloween allows you to experience the many holiday-specific events scheduled, such as after-dark cemetery tours where you can see the graves of figures like Irving himself and enter crypts; attend literary events like Edgar Allen Poe poetry and scary story readings; or test the limits of your bravery by going through Philipsburg Manor’s haunted house. 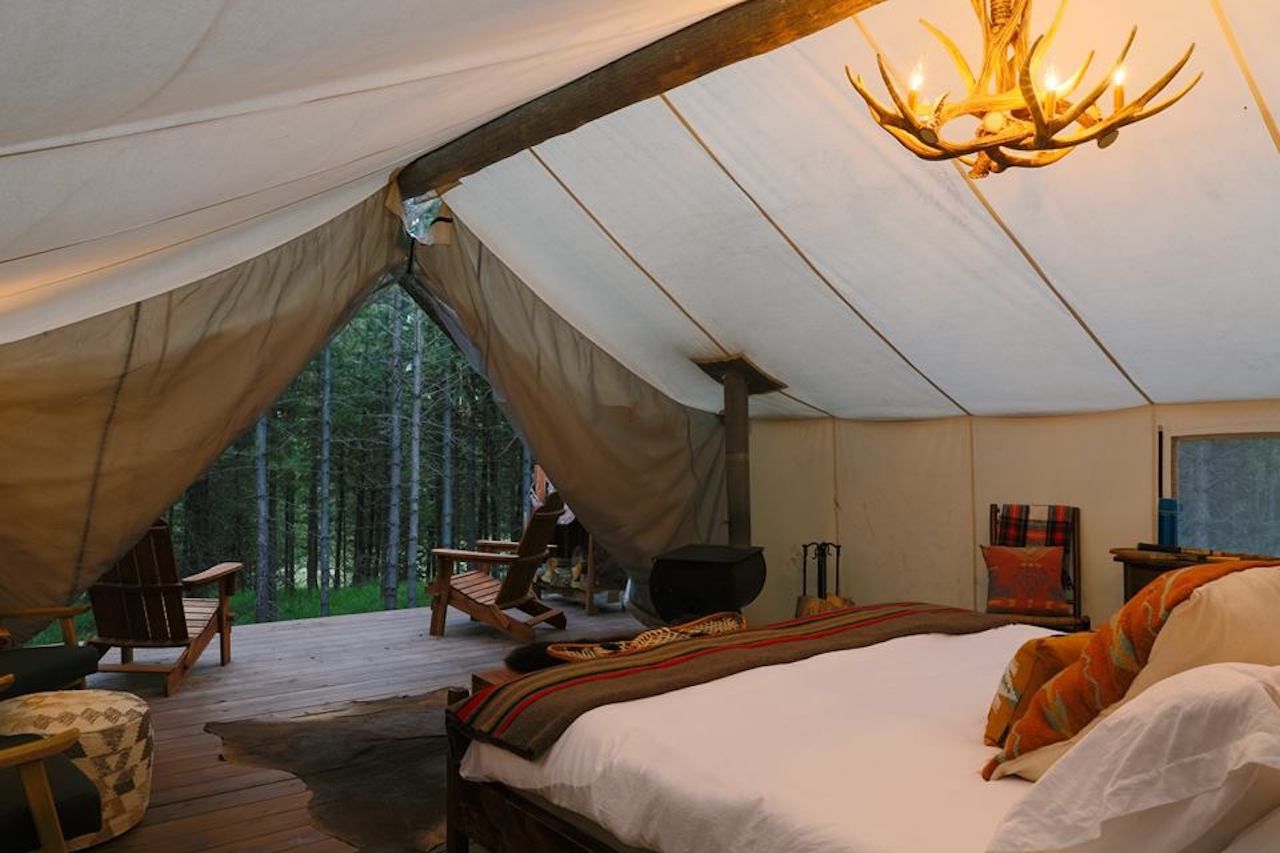 Sure, you could go camping whenever you want, but winter brings the biting cold, spring’s got the most potential for rain, and summer’s just too darn hot — not to mention the bugs. That’s why fall is such a perfect season to do anything outdoorsy in New York. Collective Retreats offers glamping for those looking to experience the great outdoors but aren’t quite keen on roughing it. The retreat is on Liberty Farms, an organic farm located in the town of Ghent. In the tents, you’ll find king or single beds with stylish 1,500-thread-count linens, an ensuite bathroom, wood-burning stoves, eco-friendly bath products, a private outdoor deck, and outlets to charge your devices. Besides operating as a farm, Liberty Farms works as an equestrian center where you can go riding. Other activities include fruit picking at nearby Love Apple Farm; perusing civil-service history at the Fireman’s Museum; and water sports like paddle boarding, river fly fishing, and sailing. 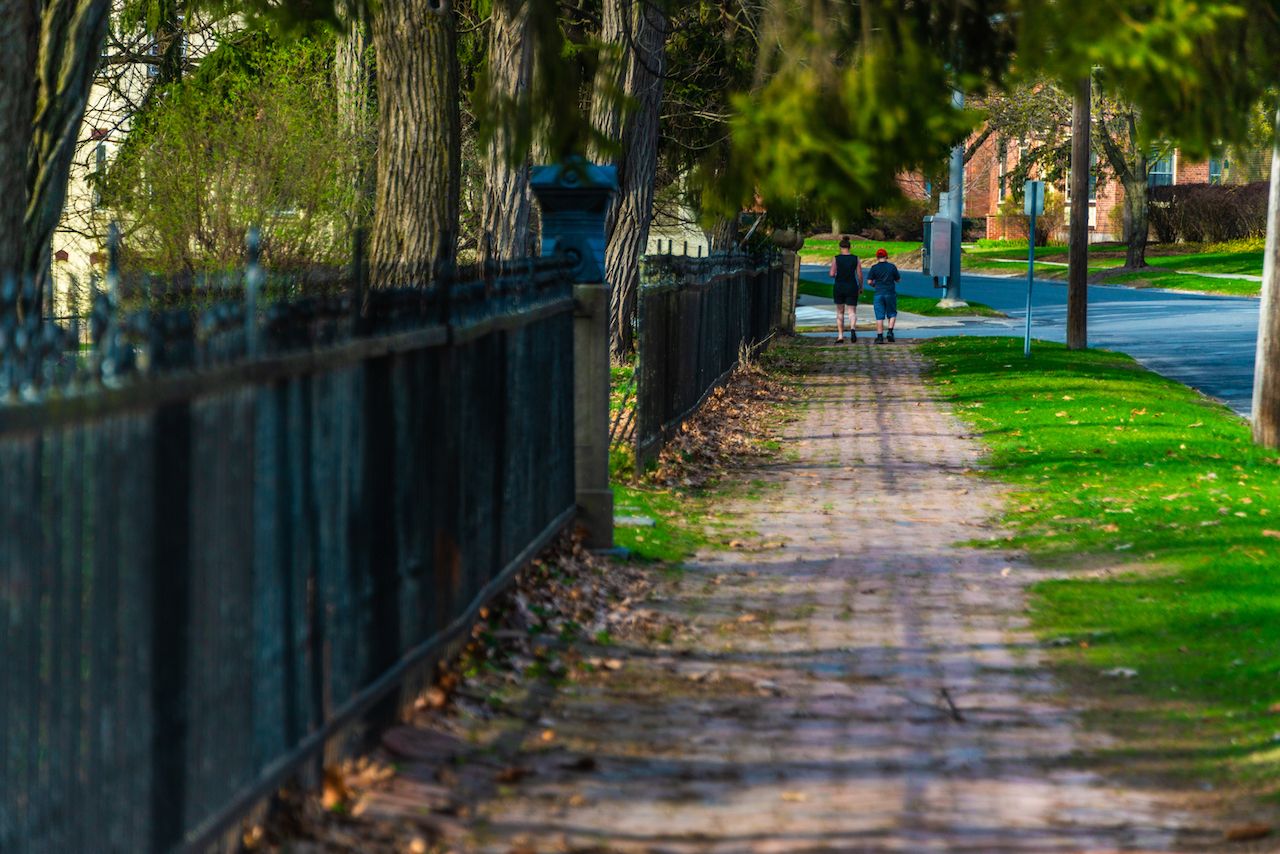 Saratoga Springs is known as either a place where the wealthy go to take a break from it all or a hub for horse racing. But the resort destination is actually affordable for the everyman, and there’s more to do than bet your money on the fastest thoroughbred. There’s the Paint and Sip Studio where a local artist leads classes on creating an original piece of art. For competitive folks, Glenville Sportsplex has miniature golf, go-kart racing, and batting cages. Keeping in line with its name, Saratoga Springs has over 20 natural mineral springs, some of which are naturally carbonated, and no two will have the same flavor. To test the theory for themselves, visitors are allowed to taste the waters at the public springs. Be sure to stop by the Saratoga Visitor Center for a map of the mineral springs to create your self-guided tasting tour. 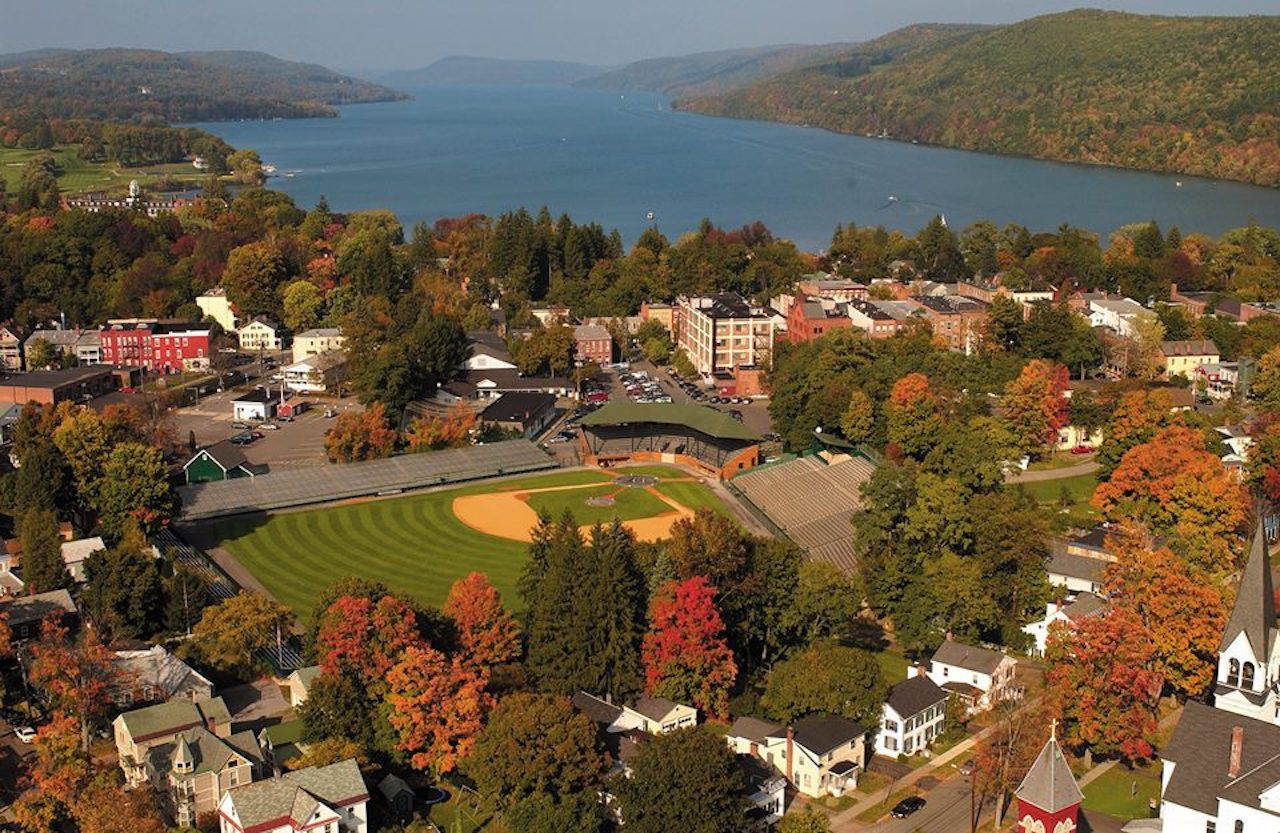 Photo: This Is Cooperstown, NY/Facebook

Despite a population of just under 2,000, Cooperstown is still kicking. It’s home to the National Baseball Hall of Fame and Museum, which serves as the epicenter for all things baseball. There are exhibits about the sport’s history in the US and expansion into other countries, artifacts on display, and portraits of Hall of Famers like Jackie Robinson and Babe Ruth. But Cooperstown is not only about sports; it’s also the proud host of the Cooperstown Beverage Trail, comprised of different producers that pay homage to the region’s long history of beverage making. Trailblazers and drinking enthusiasts alike will find something to love on this culinary tour, from Belgian-style beer at Brewery Ommegang to cider at Fly Creek Cider Mill, wine at Bear Pond Winery, and good ol’ ale at Butternuts Beer & Ale. Despite being a host, Cooperstown’s not one to be left out of the game with a brewing company of its own. Each partaking company allows visitors to enter the facilities and take a tour that showcases the production process and sample products. 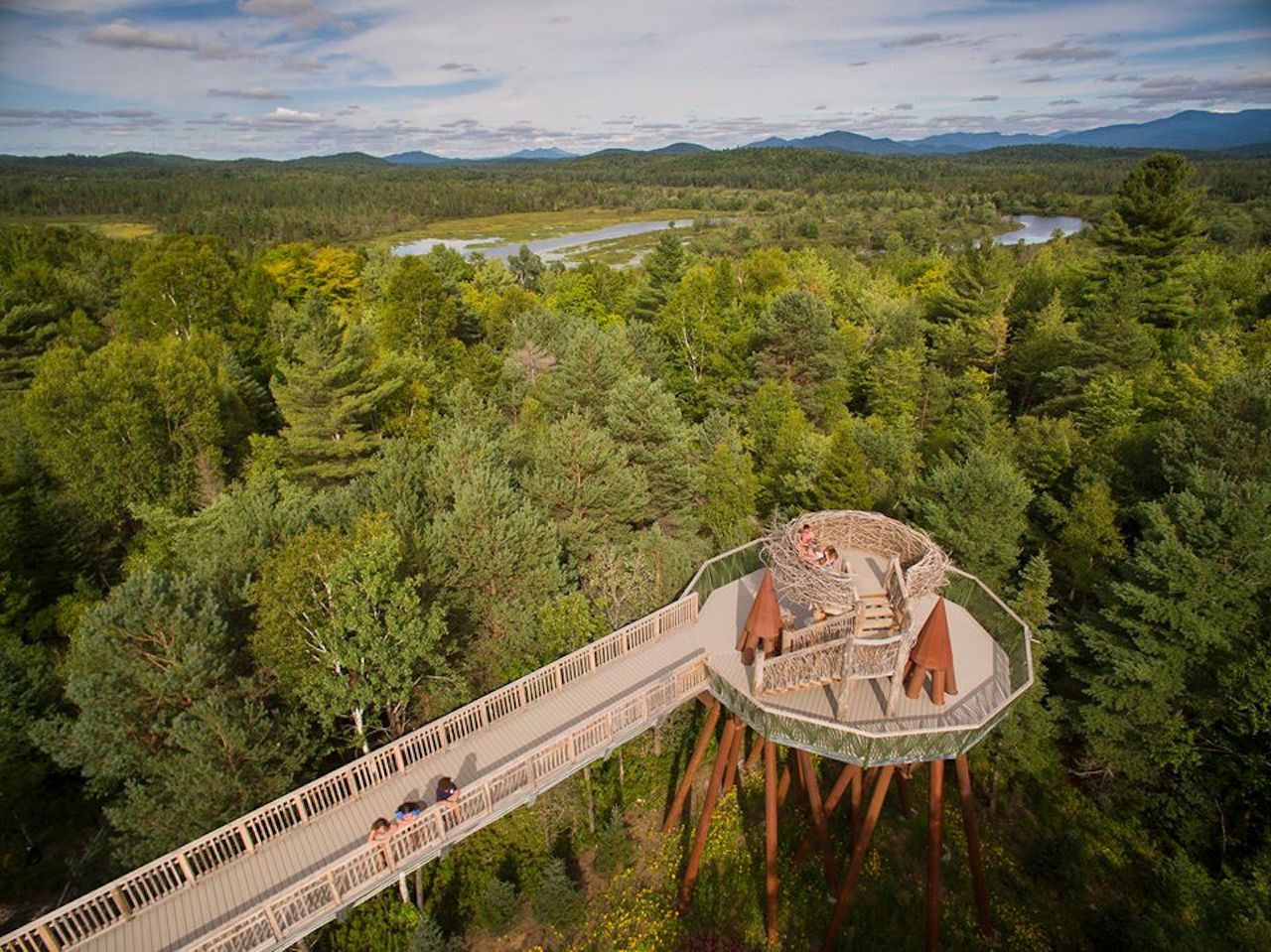 The famed Adirondack Park covers six million acres, which makes up a fifth of New York State. It has prime spots for fall foliage viewing and a variety of hiking trails around the park and up the Adirondack Mountains. Perhaps one of the more well known is the Wild Walk, where visitors can walk along the forest’s treetops through bridges and pathways. On the Wild Walk, you’ll have a chance to suspend yourself on a roped web at the Spider’s Web, enter the trunk of 160-foot white pine tree, and go looking for bald eagles.

Since the Adirondacks is such an expansive area, it can be hard to figure out where to set up a home base. Any of the lake towns that make up the Tri-Lakes region (Tupper, Placid, and Saranac lakes) are good choices with long histories to back them up. But Tupper, with its easy access to the Wild Walk, incredible stargazing opportunities at the Adirondack Public Observatory, and swimming at Little Wolf Beach, has an edge. Lake George is a noteworthy option with its location near the Ausable Chasm, known as the “Grand Canyon of the Adirondacks,” and its plentiful adventurous, adrenaline-pumping activities like via ferrata and rock climbing. Ticonderoga is also in the running with Fort Ticonderoga for history buffs, the set of the original Star Trek series for Trekkies and lovers of space, and the La Chute waterfall for those looking to get out on a boat.

CultureWhy Long Island is the relaxing weekend escape you never thought about taking
Tagged
Trip Planning New York, United States
What did you think of this story?
Meh
Good
Awesome

New York’s Erie Canal is getting a serious makeover