Halloween TRADITIONS HAVE roots in a Celtic pagan festival called Samhain, traditionally held between the fall equinox and winter solstice to welcome the harvest. A time of transition, spirits were said to rise and roam the earth. To ward them off, Celts lit bonfires and donned ghoulish costumes.

In the eighth century, after Pope Gregory III devoted November 1 to honoring saints, Samhain traditions became All Saints’ Day festivities, and the night before became known as All Hallows’ Eve, later Halloween. Like Saint Paddy’s Day, though, the holiday took on a new life after Irish immigrants brought it to the US in the 19th century. Today, America’s all-out celebration of costumes, candy, and all things spooky has redefined Halloween in the world’s eyes.

Some places, like the Celtic nations and the Philippines, have integrated old customs into modern celebrations. Others have embraced American Halloween. One thing is true everywhere that celebrates Halloween, however: October 31 is always a party. 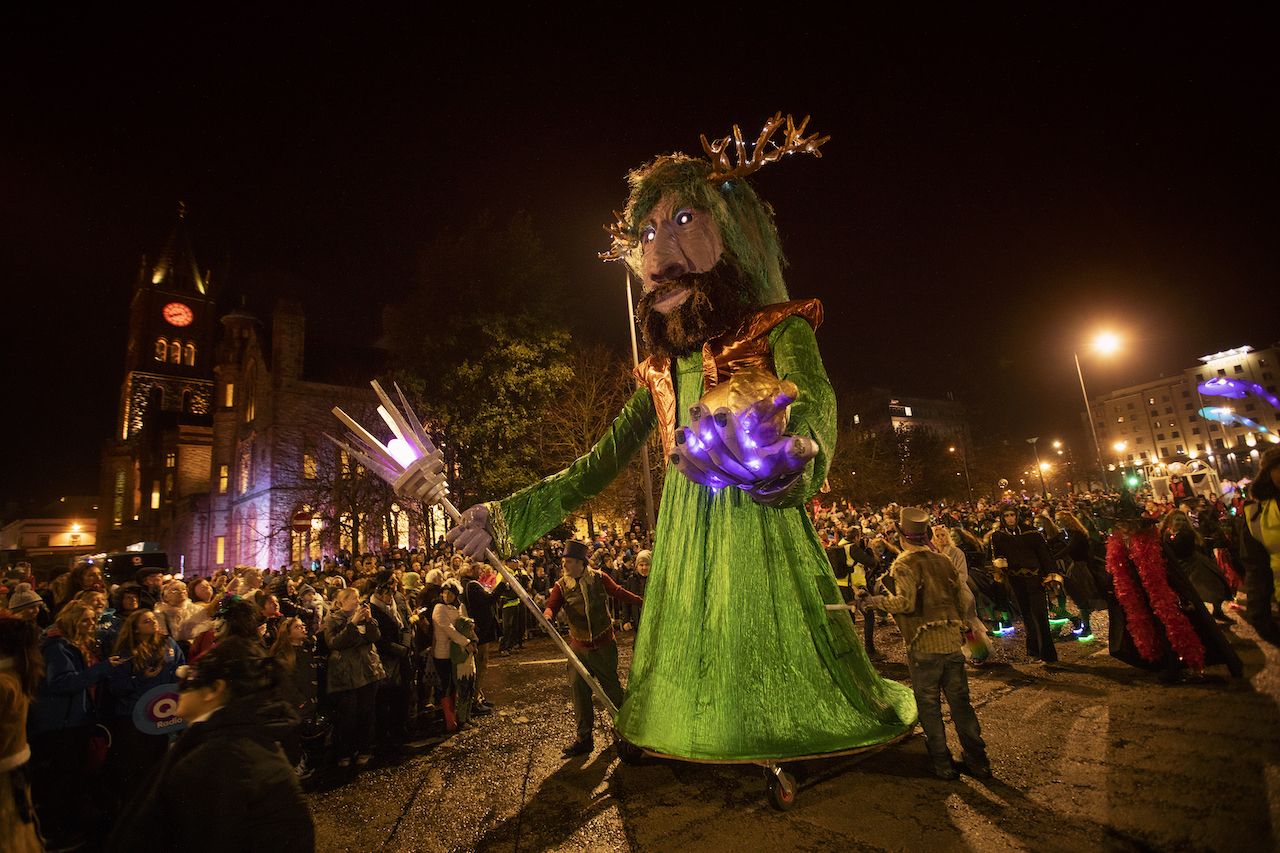 These days, Halloween in Ireland looks a lot like Halloween in the US, albeit on a smaller scale. Kids carve jack-o-lanterns, an adaptation of an old turnip-carving custom, and go trick-or-treating, a take on dressing up as spirits and performing tricks like reciting poems or songs in exchange for gifts. Pranks like egging are fairly common in Ireland, as are games like snap apple, a Halloween staple in County Kerry. The concept is similar to bobbing for apples, but the fruit is suspended from string rather than submerged in water. In bigger cities, restaurants and pubs put on themed events for adults.

Some present-day traditions harken back to Samhain, however. Bonfires are as much a fixture now as they were in Celtic times. In keeping with the theme of warding off evil spirits with fire, revelers set off fireworks in the streets and a fireworks show closes out the Banks of the Foyle Halloween Carnival in Londonderry, Northern Ireland. Another extravaganza, the Spirits of Meath Halloween Festival, held throughout County Meath in October and early November, hosts fancy dress pub events, pumpkin-carving contests, haunted attractions, and more.

This year, the Irish tourism board is also staging a brand new festival, Púca, as a way of claiming Halloween’s heritage and getting back in touch with its roots. Those lucky enough to participate can expect music and light shows, horror film screenings, a Samhain procession on the Hill of Ward, food offerings that pay tribute to the harvest, and storytelling. The festival’s name, Púca, references a creature from Celtic lore responsible for fortune, both good and bad. 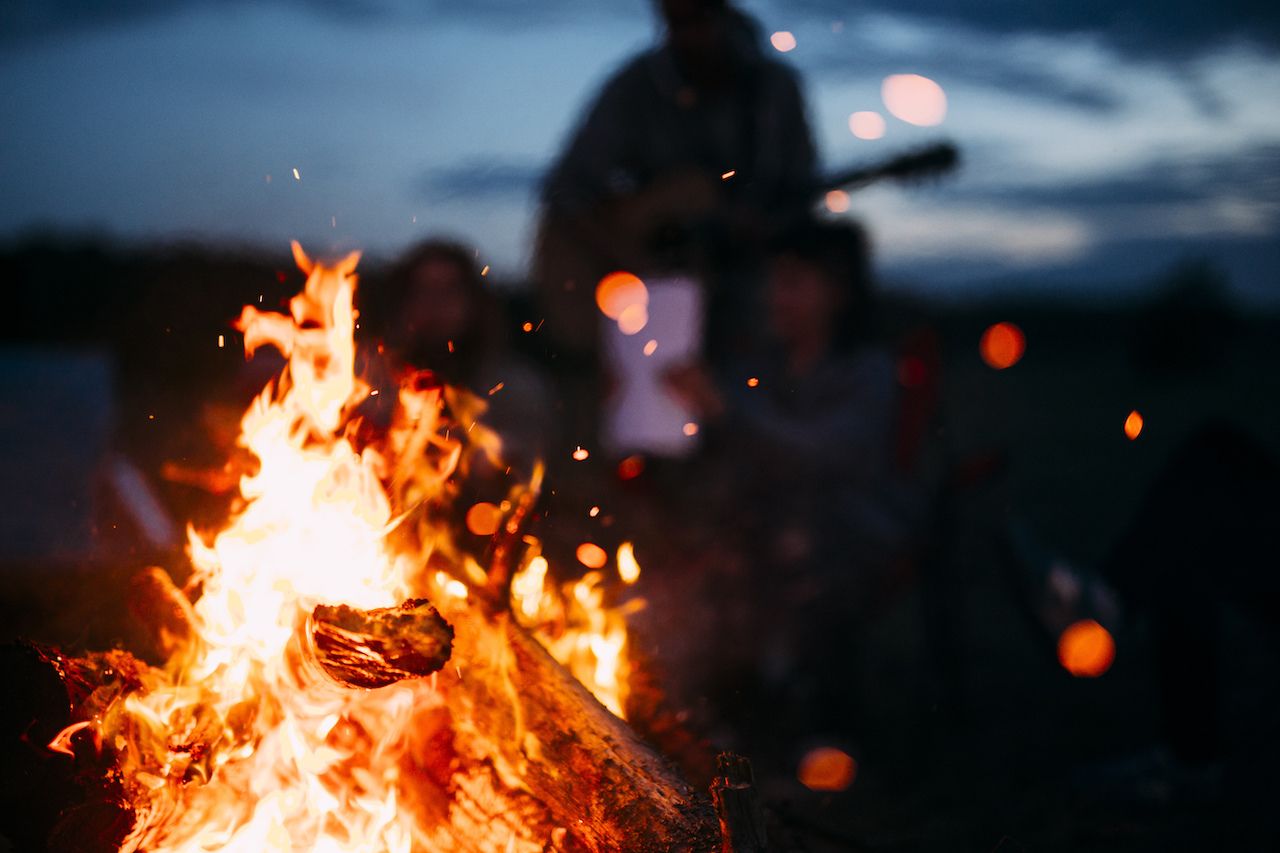 Scottish and Irish Halloween customs overlap, yet the two also have distinct traditions. In Scotland, some carve neep, or turnip, lanterns while others have adopted the easier-to-cut pumpkin. Kids go apple dooking, what they call bobbing for apples, and try to eat treacle scones dangling in front of their faces without using their hands. Costumes vary, but they generally tend toward the frightening, a nod to the old guising practice in which young people dressed as spirits and went around collecting treats like fruit or coins.

Some of Scotland’s unique Halloween traditions revolve around romance, of all things. Nut cracking is a tradition for recently engaged couples, who are meant to throw a nut into a bonfire to see how their marriage will fare: If the nut cracks open quietly, it’ll be a smooth marriage, while if it hisses and pops, it’ll be a rocky union. For singles, there’s also kale pulling, which entails uprooting kale stalks to reveal the height and general figure of your future partner. 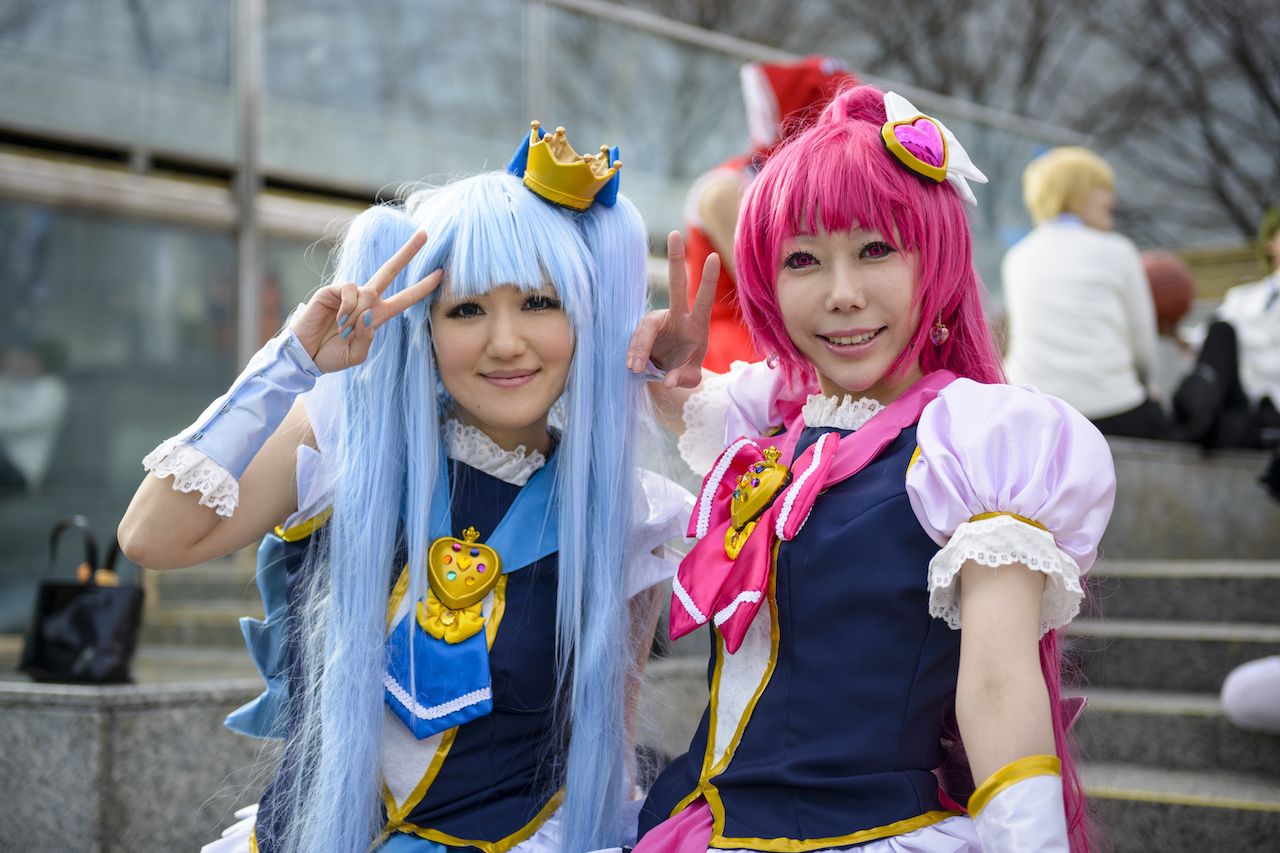 Halloween in Japan is neither about the ghoulish and gruesome nor the promise of candy. It’s not even marketed toward kids. As the Japanese celebrate their dead during the Obon Festival in July or August, October 31 is merely an excuse for adults to cosplay and flood the streets.

Halloween was slow to take hold in Japan, growing in popularity ever since Disneyland Tokyo organized its first spooky event in 1997. Bars and clubs later caught on, hosting theme nights, and small parades started forming. In recent years, the holiday has exploded in cities like Tokyo, Osaka, and Kanagawa. Shibuya Crossing has become the place for costumed partiers to congregate, though it has some competition in Harajuku, where some say the first seeds of Halloween were planted in the 1970s. Amusement parks like Disneyland Tokyo and Universal Studios in Osaka continue to throw massive Halloween parties, as well. 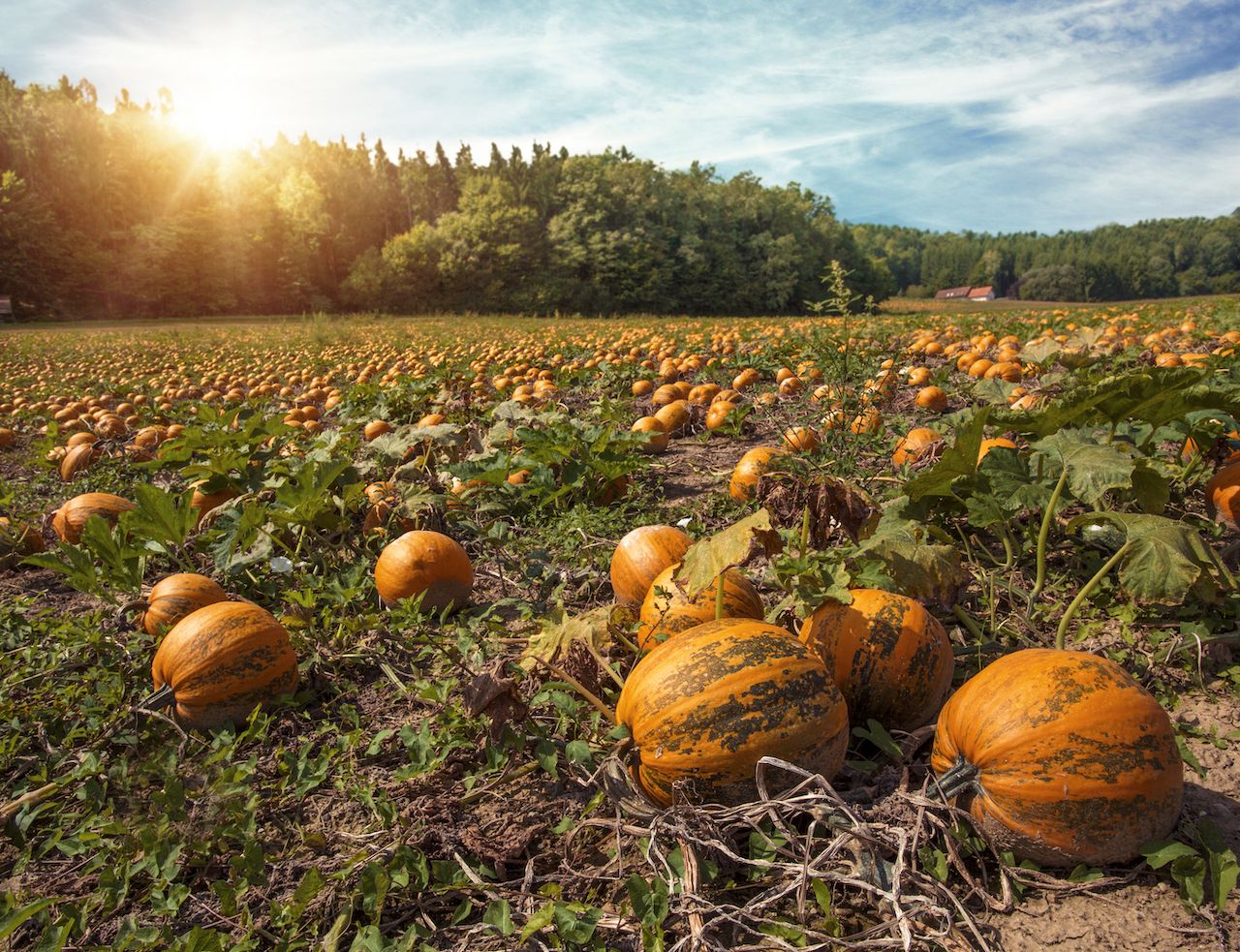 Austrians celebrate Seleenwoche, or All Souls’ Week, between October 30 and November 8. A relatively sober holiday, it largely revolves around church services. There is one notable Halloween tradition in Austria, however: it’s customary to leave bread, water, and lanterns out on the night of October 31, much like kids do for Santa Claus on Christmas Eve. Halloween night is said to be rife with cosmic energy, and the offerings are intended for wandering souls. Like in the US, Halloween is also a time for pumpkins in Austria, though the focus is on growing, showing, and eating the gourds rather than carving them. 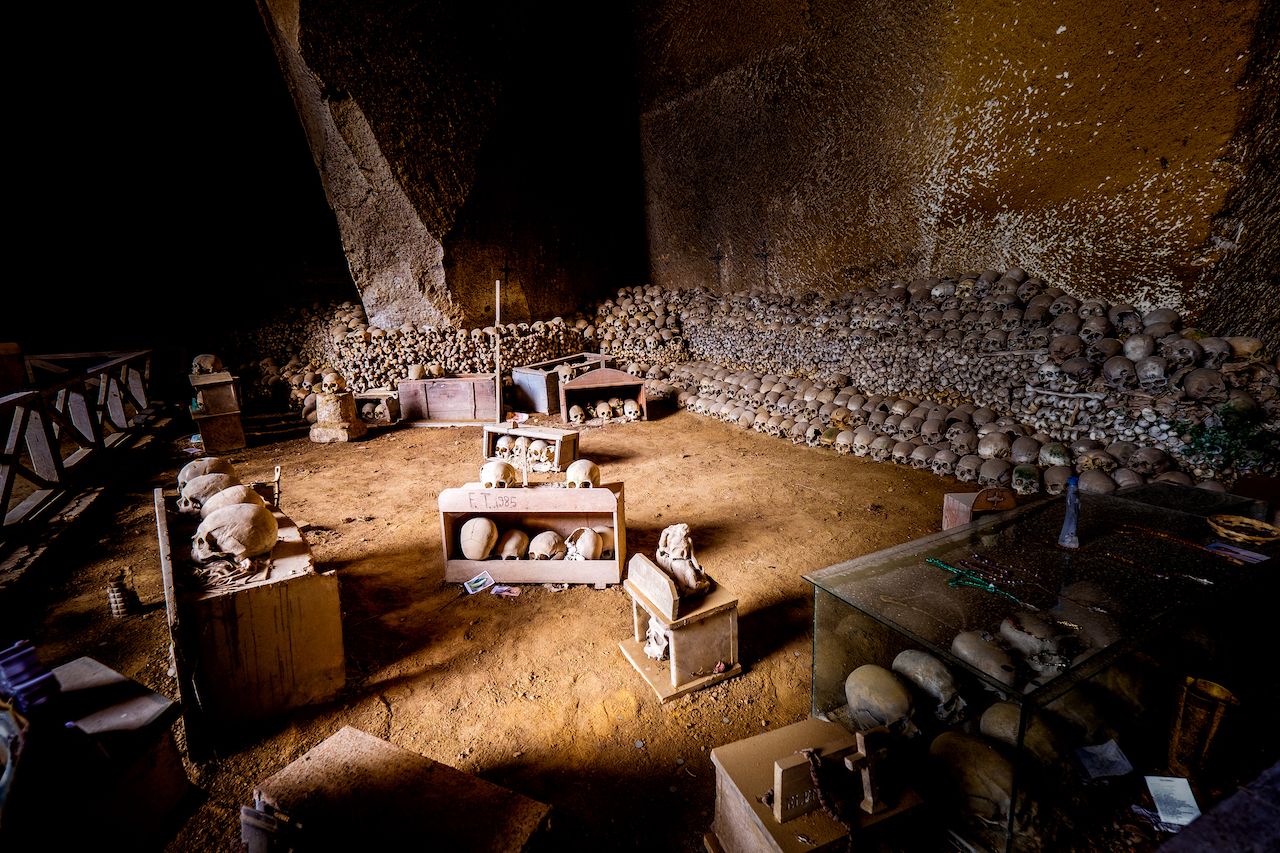 Halloween in Italy blends Celtic traditions, which ancient Italians witnessed firsthand as the Roman Empire conquered the Celtic nations, and American Halloween. Candy, costumes, and jack-o-lanterns are increasingly popular, as are Halloween parties in bars and restaurants. Trick-or-treating, or dolcetto o scherzetto, is also catching on, though children go from store to store collecting small treats rather than knocking on front doors.

Outdoing haunted houses elsewhere, Italians organize tours of ancient sites like catacombs and castles on Halloween night, as well as flock to amusement parks for terror-themed events. A handful of towns take Halloween particularly seriously, getting decked out in scary decorations and hosting everything from fire spinners and tarot card readers to Miss Strega (Miss Witch) pageants, and jump-scare-filled walks through a Passage of Terror.

The most popular places to celebrate are Corinaldo in the Marche region for the Festa della Streghe, which translates either to Witches’ Feast or Witches Festival; Triora, Liguria, the city that hosted Italy’s last witch trials during the Renaissance; and Borgo a Mozzano, Tuscany, with celebrations largely centered on the Ponte della Maddalena, also known as the Ponte del Diavolo or Devil’s Bridge. 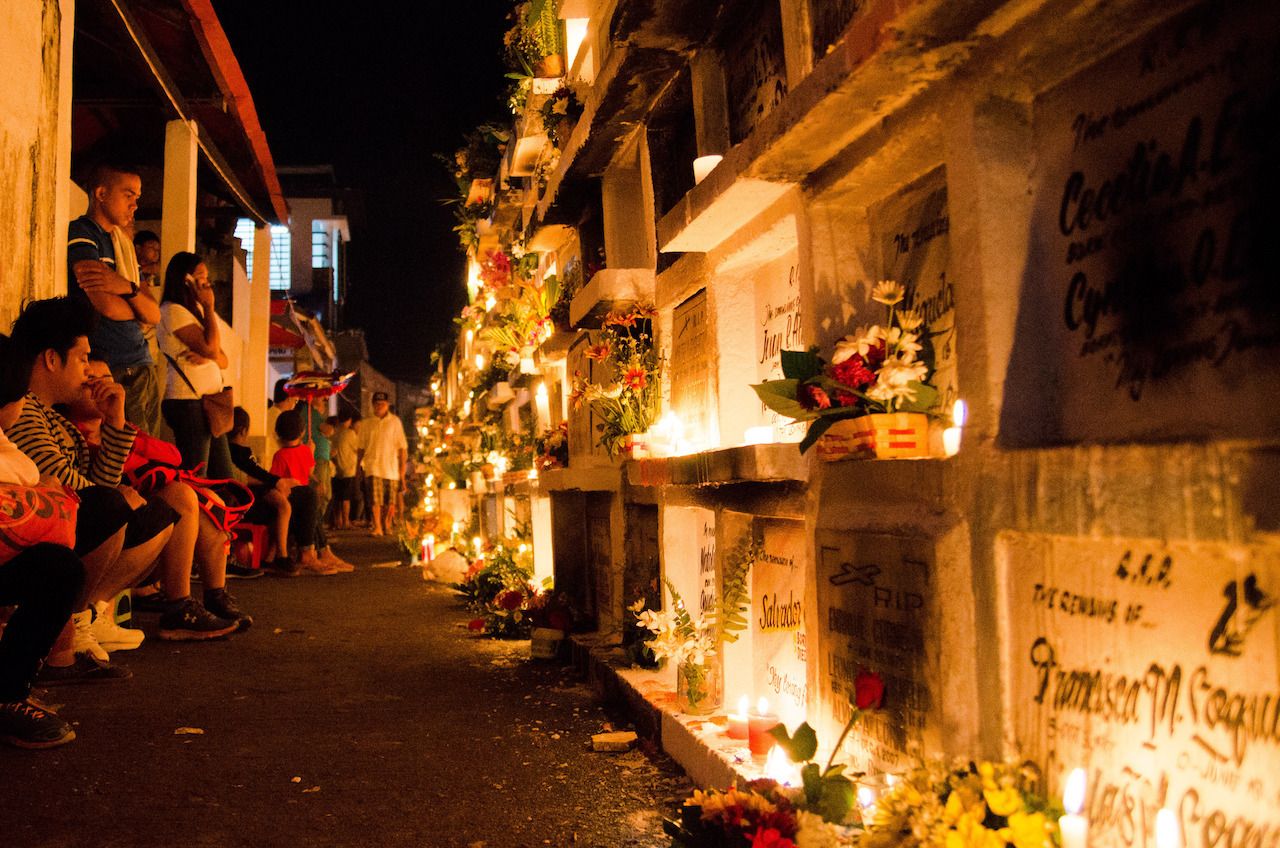 October 31 kicks off the Philippines’ All Saints’ Day festivities, which are more family-oriented than America’s raucous Halloween parties. The entire holiday is meant to honor deceased relatives, with families lighting lanterns and visiting the cemeteries where their loved ones are buried. Many leave food offerings, and some even camp out. That said, you’ll also see parades, parties, and other familiar Halloween traditions in Manila and larger cities.

Smaller towns often host trick-or-treating events for kids, with stores leaving out small treats for them to collect. Slowly, trick-or-treating is replacing the practice of pangangaluluwa where groups of children go around to different houses singing carols about souls for alms, generally money or food, a tradition that’s still practiced in the rural provinces. Most children dress in scary costumes. Though many bars host Halloween parties in the Philippines, it’s a family-centric holiday meant to honor loved ones rather than celebrate ghosts. 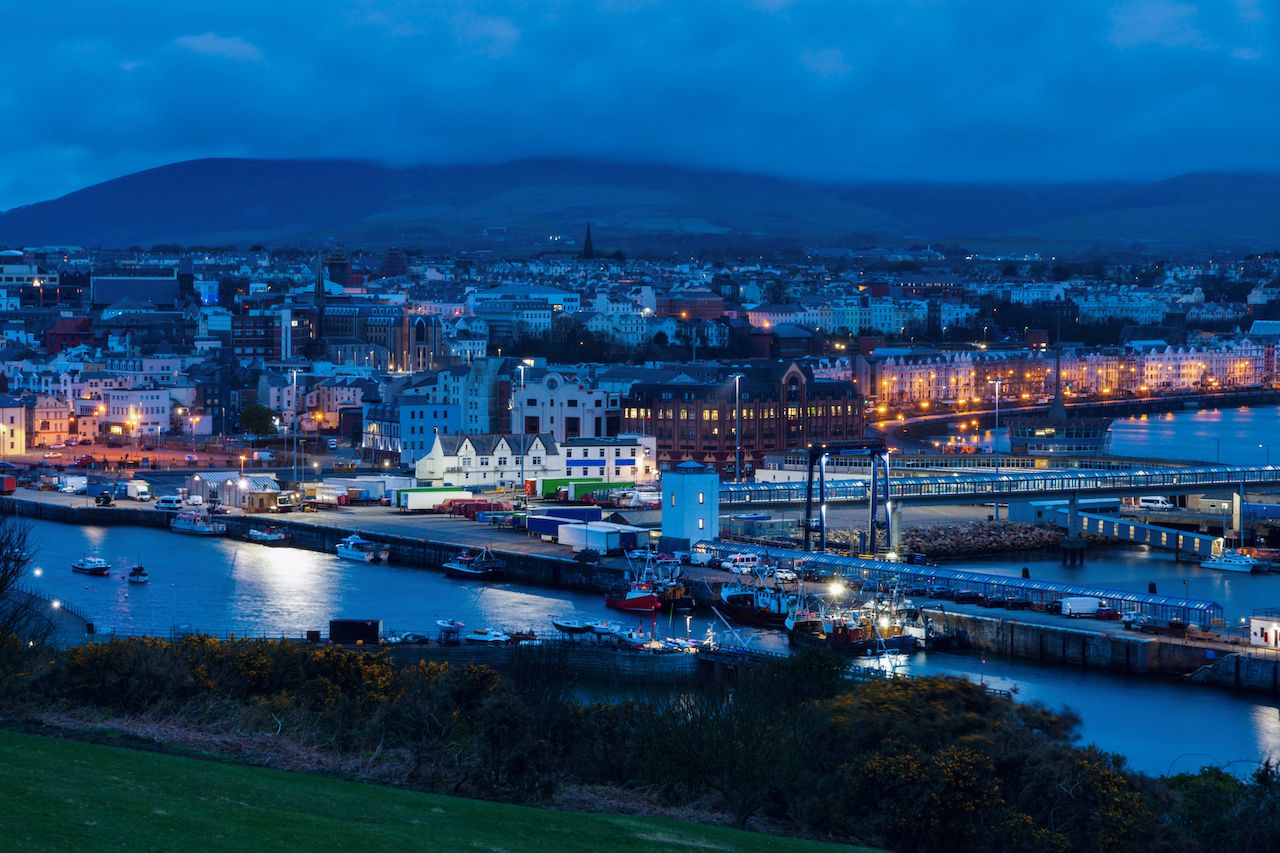 A semi-autonomous British Isle that marches to the beat of its own drum, the Isle of Man hosts its own festival on Halloween night: Hop-tu-Naa. Like Samhain, the holiday began as a way to usher in the harvest and the Celtic New Year. Yet much like in Ireland today, October 31 has been Americanized on the Isle of Man. Still, a Manx Halloween will almost certainly involve activities like carving lanterns out of turnips and going around to different houses while singing old folk songs. Small towns put on festivals across the island that are a little bit Hop-tu-Naa, a little bit Halloween, and a lot of fun.

Epic Stays9 Haunted Hotels You Can Actually Spend the Night In
Tagged
Festivals Holidays
What did you think of this story?
Meh
Good
Awesome