Every fall, Americans go pumpkin crazy. We turn them into jack-o-lanterns on Halloween, bake them into pies and toast their seeds, even make arrangements out of the little ones for our Thanksgiving tables. But regardless of whether we’re carving them, cooking them, or using them as decoration, half the fun of pumpkin season is procuring the bright orange gourds. This fall, make your annual pumpkin picking outing an all-day event at one of these nine pumpkin patches from New York to California. You’ll play carnival games, navigate corn mazes, and fill up on all the best fall treats. And you’ll definitely walk away with the best-looking pumpkin on the block. 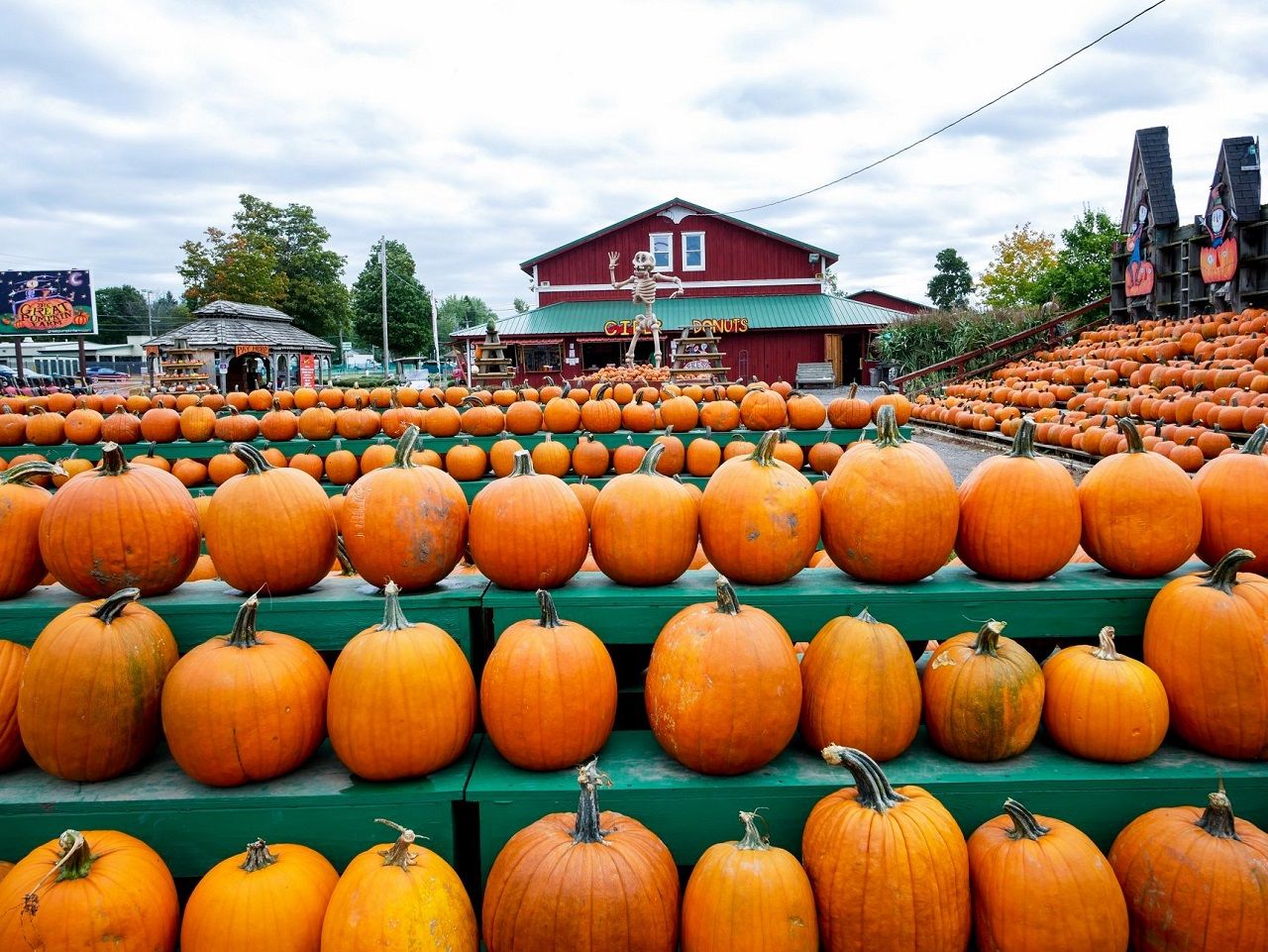 You get more than pumpkins at this farm in upstate New York, about 20 minutes outside of Buffalo– you get a whole festival. Between September and October, weekends at this pumpkin farm are a riot of kid-friendly activities like hayrides, corn maze games, comedy and magic shows, pie-eating contests, and amusement rides. Frequent trips to the Pumpkin Palace’s bakery and candy shop, Witches Brew Bar and Cafe, and cider and donuts stand will keep the sugar rush long enough to do it all. Actually pick up a pumpkin while you’re here, and you can source this year’s jack-o-lantern from the first farm to grow a pumpkin over 1,000 pounds, as recognized by the Guinness Book of World Records from the 1996 Great Pumpkin Farm Weigh-Off. 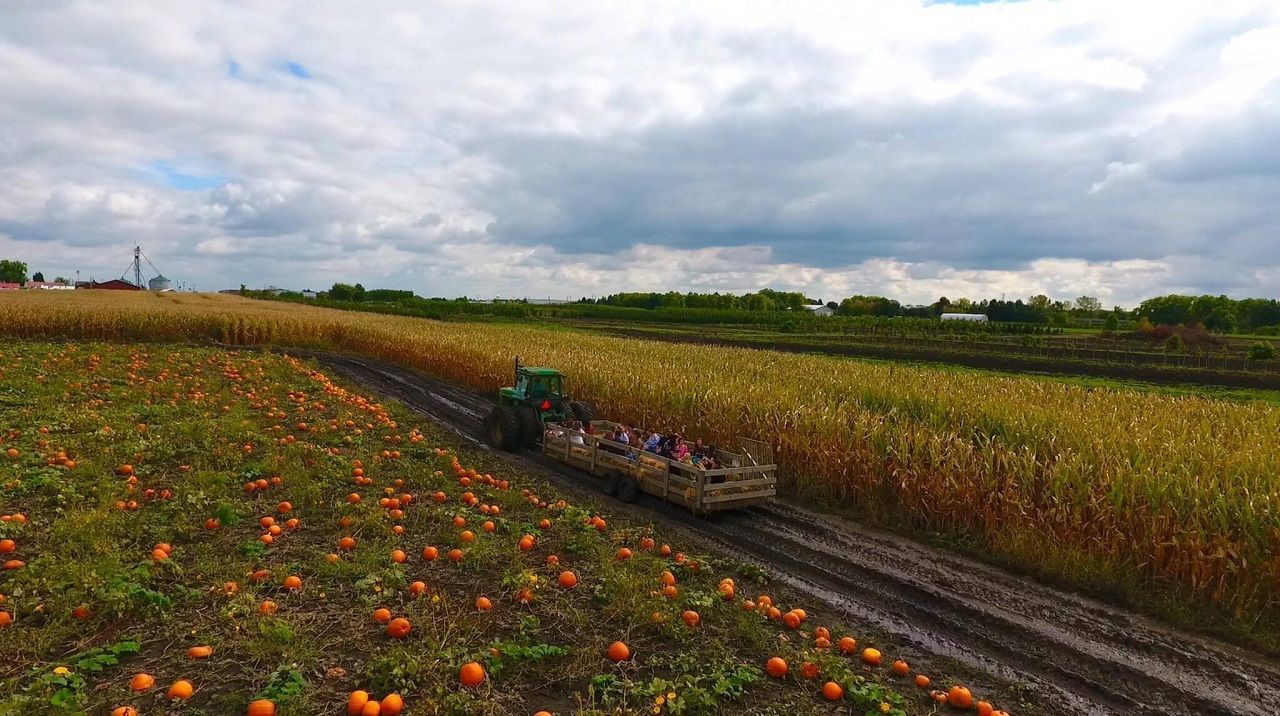 Skip breakfast before visiting Siegel’s Cottonwood Farm’s annual pumpkin fest. Expect to be eating all afternoon, whether you’re snacking on fried pickles in line for Mia and Miley’s Mountain Slide, holding an apple cider donut in one hand while doing the Cow Ball Throw with the other, or crushing a funnel cake before riding The Wizzer (probably not a good idea). Other attractions range from paintball at the Scrap Yard Shoot Out and visits with Zack’s Farm animals to panning at the mini-claim Golden Gulch Gem Mine and trips to Farmer Frank’s Haunted Barn. Siegel’s Pumpkin Farm is open seven days a week through October. 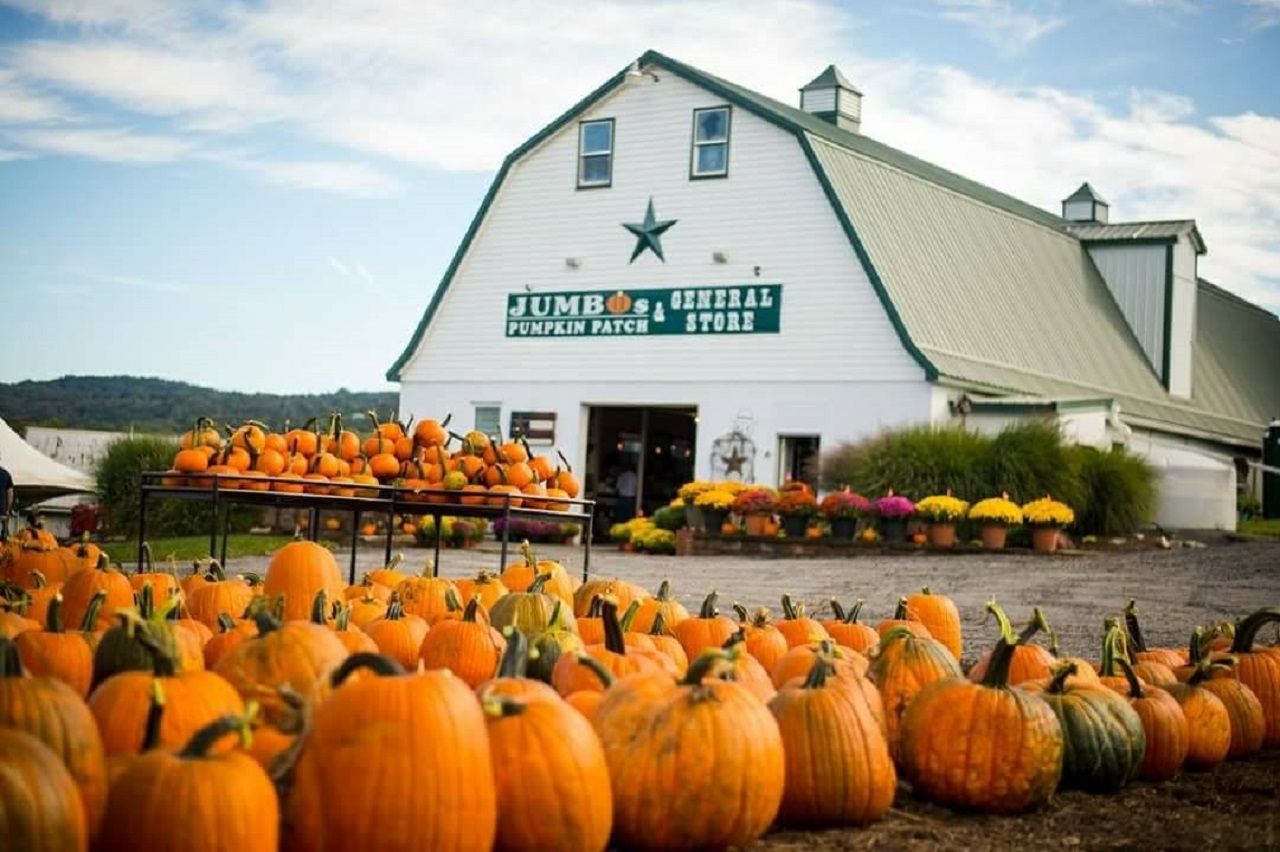 An hour west of Baltimore, Jumbo’s features on several lists of the country’s most impressive pumpkin patches. Families love the petting zoo and 20-acre corn maze, as well as the pony and hayrides, corn cannon, and jumping pillows, which look like a cross between a bouncy house and a trampoline. While here, stock up on artisan goods from more than 45 local vendors, as well as decorations and carving kits. Looking for a fun fall party idea? Jumbo’s Pumpkin Patch also hosts private events from birthday parties and church group outings to corporate retreats.

As part of its larger FallFest, Shady Brook Farm puts on PumpkinFest, where you can hunt for pumpkins, play carnival games, get lost in a straw bale maze, and bounce between inflatable attractions. Later, keep it going at PumpkinFest After Dark, which offers all that plus bonfires and plenty of craft beer and wine. On Saturdays and Sundays around brunch time, there’s a Bloody Mary bar for the adults, as well as live music on Friday nights and weekends. Yardley is only 45 minutes or so from Philly, offering a perfect excuse to get out of the city for the day. 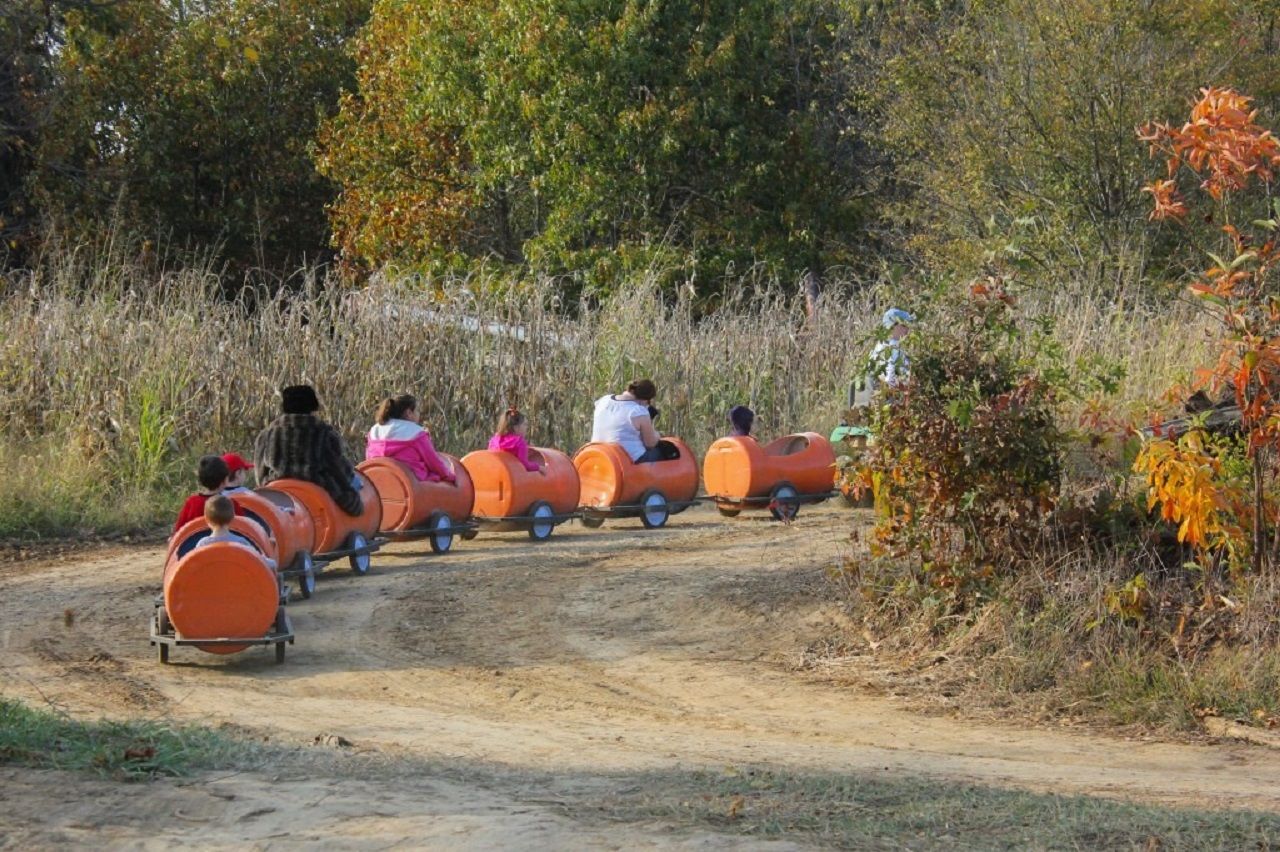 Most pumpkin patches close up shop by Halloween. Not Pumpkin Hollow, open until November 2 this year. There are multiple play areas for kids, including a friendly forest and haystack playground, and countless activities: duck racing, mingling with farm animals, and a number of games involving corn stalks to name a few. Friday nights turn things up a notch with a zip line, flashlight maze, zombie paintball, and more while the friendly forest becomes a frightful one. Plan a weekend visit, or return visit, for pony and train rides, plus pig scrambles. 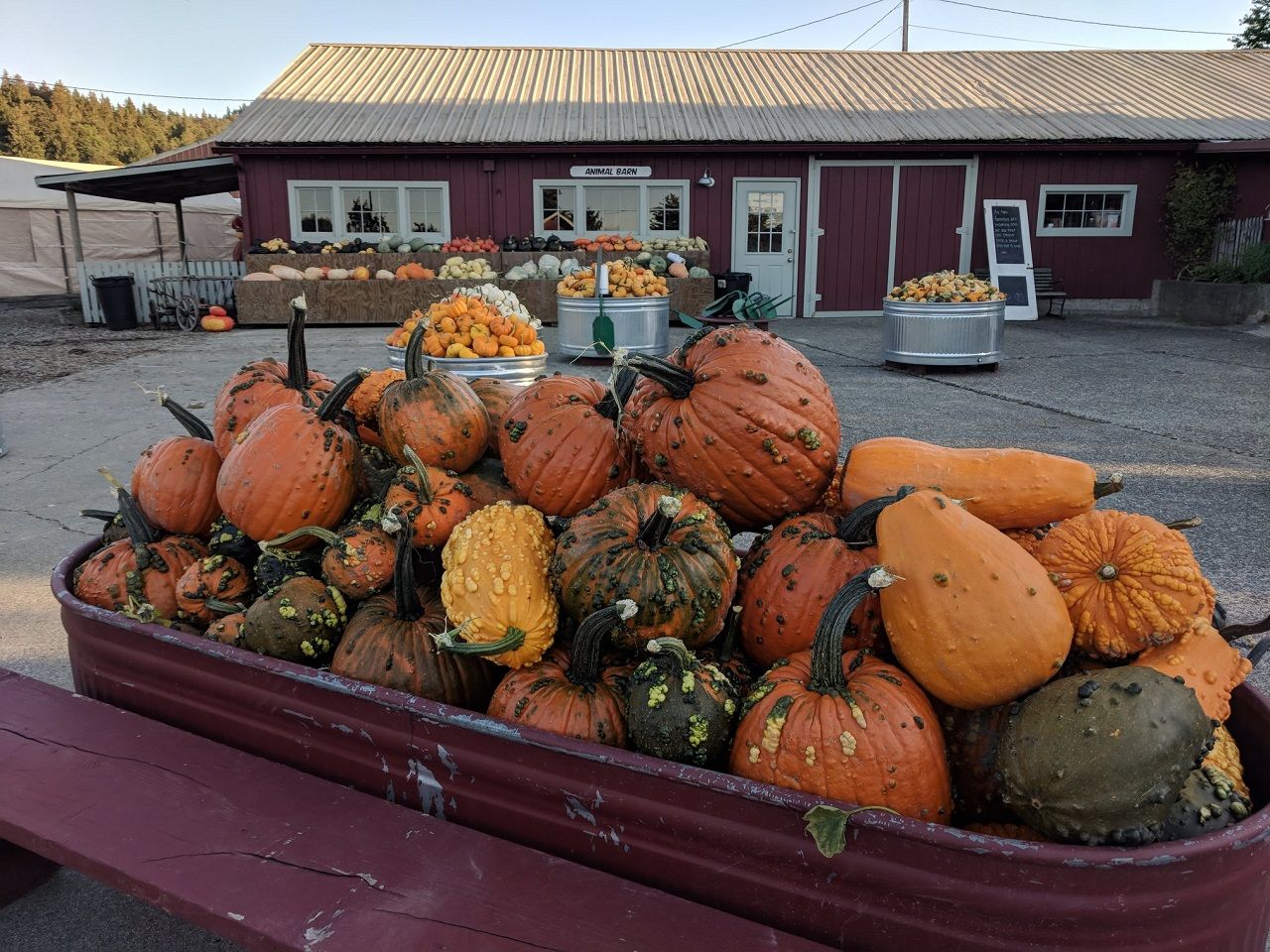 Swing by Craven Farm for a pumpkin or two, and you’ll likely get distracted by human foosball, mini golf, the farm’s new apple cannon, or the 15-acre corn maze (this year’s theme is Alice in Pumpkinland). Don’t leave without perusing the 20-acre pumpkin patch, though, which has more than 30 different types of pumpkins to choose from. On weekends, stay as late as 10:00 PM during Flashlight Nights. Last call to enter the corn maze is 9:00 PM.

Irvine Park Railroad is a fun choice for family outings no matter the season, with train rides, paddle boat and bike rentals, pony rides, the Orange County Zoo, and more. During fall, visitors get all that and more at the pumpkin patch setup behind the train station. Activities for the little ones include pint-sized John Deere racers, face painting, pumpkin and cookie decorating, carnival games, and more. The bravest among them will enjoy getting spooked in the haunted house with the older kids, and even the parents will enjoy the hay maze. 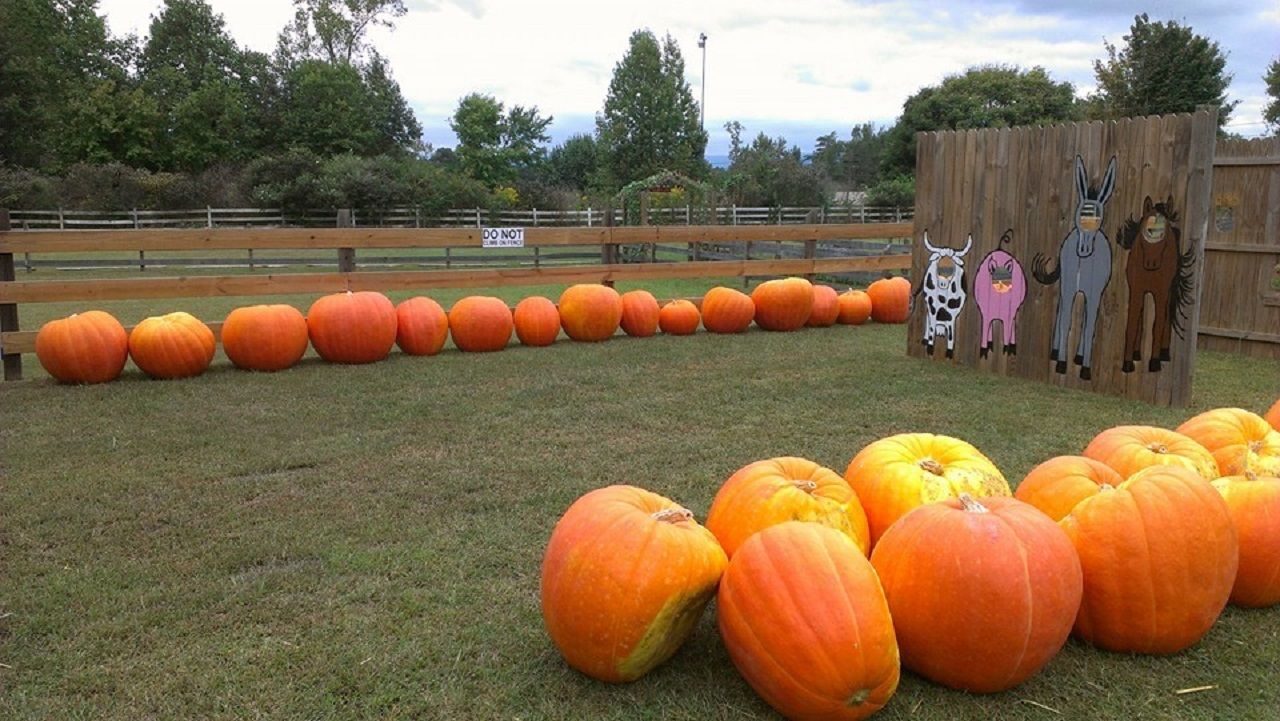 Roughly an hour north of Atlanta, Yahoo Farm has everything you could hope for from a pumpkin patch farm: pumpkin wagons, corn cannons, pony rides, and hay and corn mazes and rides that become the Cosmic Corn Maze and Haunted Hayrides on Saturday nights. Visit on a Saturday night and you can also roast marshmallows or pick up a s’mores kit from the concession stand. The next morning, kids under eight can do the Yahoo Farm Pumpkin Hunt and meet the farm’s Pumpkin Bunny. Ask for help when it comes time to pick out the right pumpkin as Yahoo Farm grows a variety, and the staff can help with what’s best for jack-o-lanterns, pies, table settings, etc. 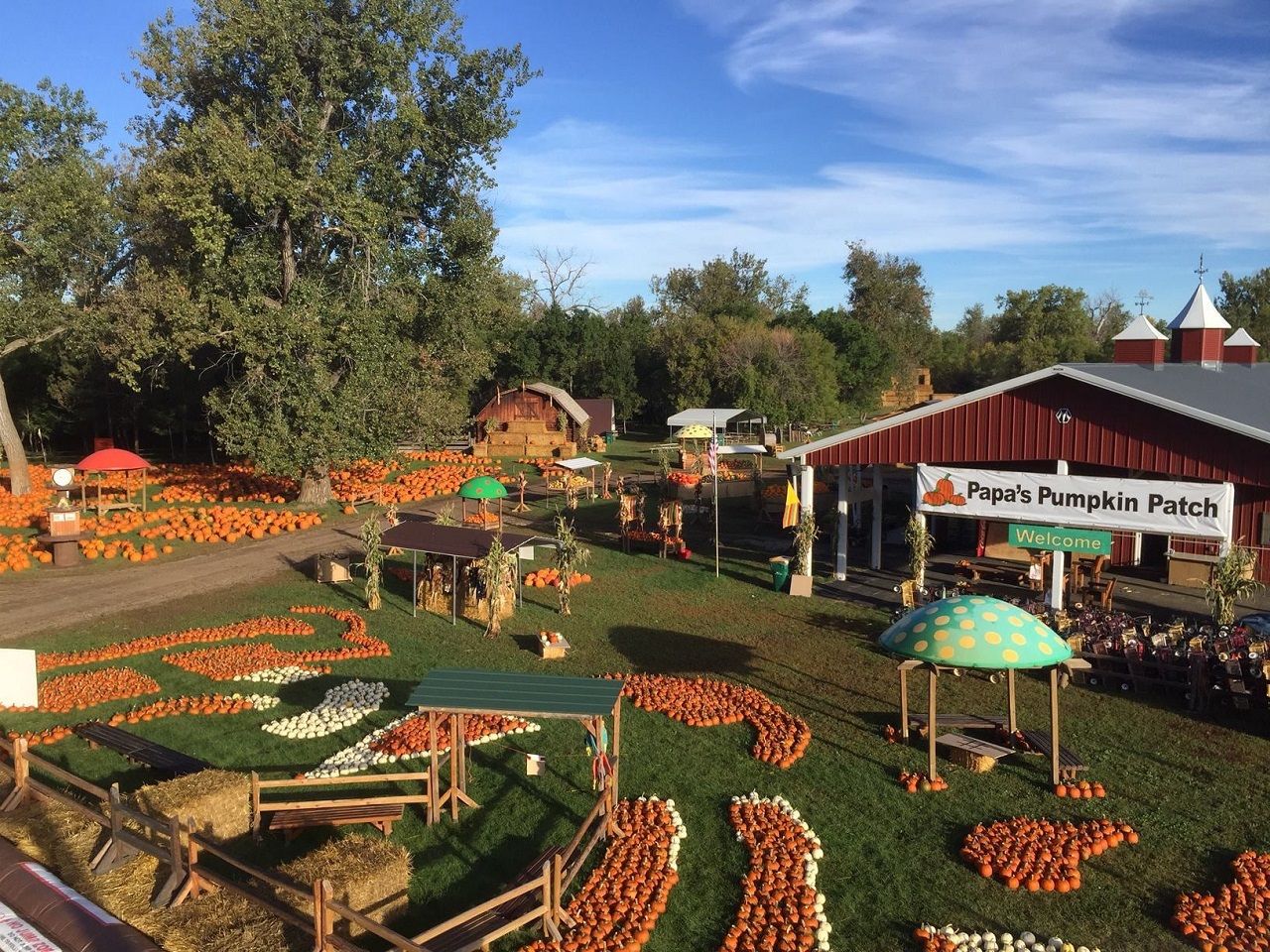 This family-friendly, pet-friendly pumpkin patch in Bismarck is one of the best places to bring the entire household during fall, weather permitting. Take it easy on a nature trail or get competitive at the obstacle course. Choose between pony, train, and hayrides or do one of each. Get a front-row seat to the pumpkin cannon or hurdle corn cobs through the sky with a slingshot. Thanks to popular demand, Papa’s Pumpkin Patch has extended its fall festivities to October 20 this year.

BeerPumpkin Beer Is the Most American of All Beers. Time To Give It Some Respect.
Tagged
Family Travel Insider Guides United States
What did you think of this story?
Meh
Good
Awesome