No amount of museum visits will teach you more about a culture than its cuisine. Food tells us where people come from, both geographically and historically. It offers insight into how communities are structured and how they celebrate special occasions. Best of all, food lets outsiders experience traditions honed over generations in a hands-on way, sometimes literally.

British Columbia has a sacred culinary history dating back to its earliest inhabitants. In First Nations culture, preparing a meal is about more than just sustenance, explains Paula Amos, the chief marketing and development officer at Indigenous Tourism BC. It’s also about celebrating the land and fostering a shared heritage.

“Food in our Indigenous communities really brings people together,” says Amos. Fishing, hunting, and harvesting together made families closer. Grease trails enabled trade between tribes to spread coveted bounty like eulachon fish or herring spawn, and community celebrations like potlatches and canoe gatherings center on feasting and sharing wealth even today.

Of course, food is also a means of introducing visitors to British Columbia to First Nations culture. Indulging in traditional cuisine and patronizing Indigenous-owned eateries and wineries are among the best, and most delicious, ways of supporting Indigenous tourism. While visitors have their pick of First Nations food experiences in BC, these seven are worth prioritizing, from the heart of Vancouver to the Okanagan Valley. 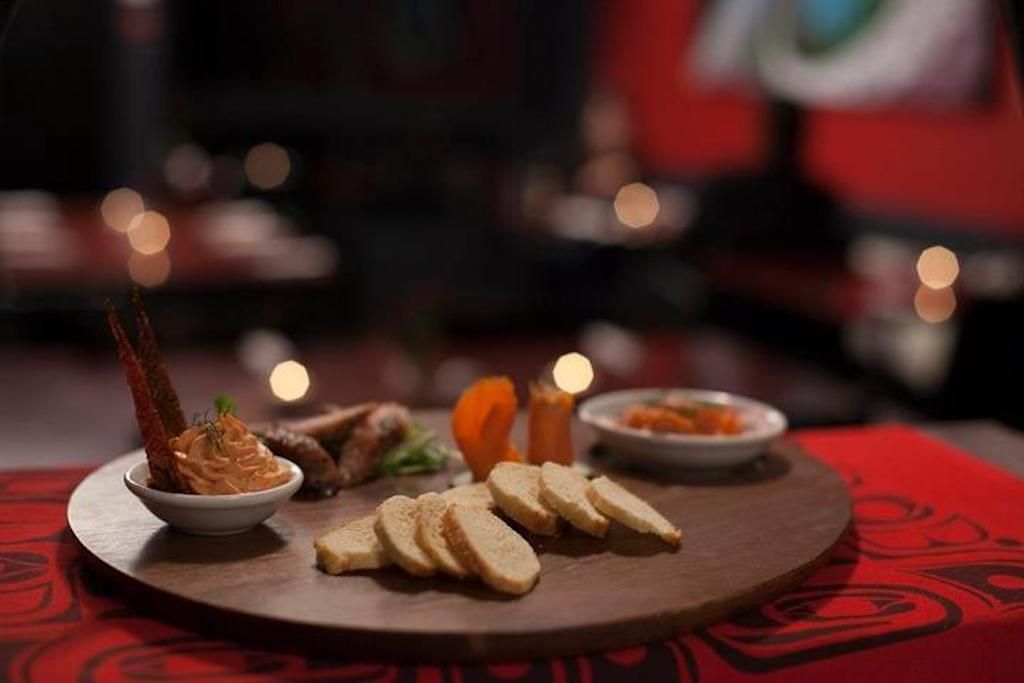 Vancouver’s only First Nations restaurant, Salmon n’ Bannock is the poster child for modern, traditional dining. It takes seasonal ingredients long used by BC’s Indigenous communities and dishes them up with contemporary flair. Take the meatloaf, which is made with elk or bison instead of ground beef and comes with a side of bannock, which is a type of fried bread. Wild fish like snapper and salmon also feature on the menu. “They really do some innovative twists on our traditional food,” says Amos, citing a salmon ceviche previously on the menu as a personal favorite.

With a wine list dedicated to Indigenous-owned estates, Aboriginal decor touches, and a friendly First Nations staff, it’s no surprise that Salmon n’ Bannock has become a popular choice for Vancouver diners at large, so be sure to make a reservation. 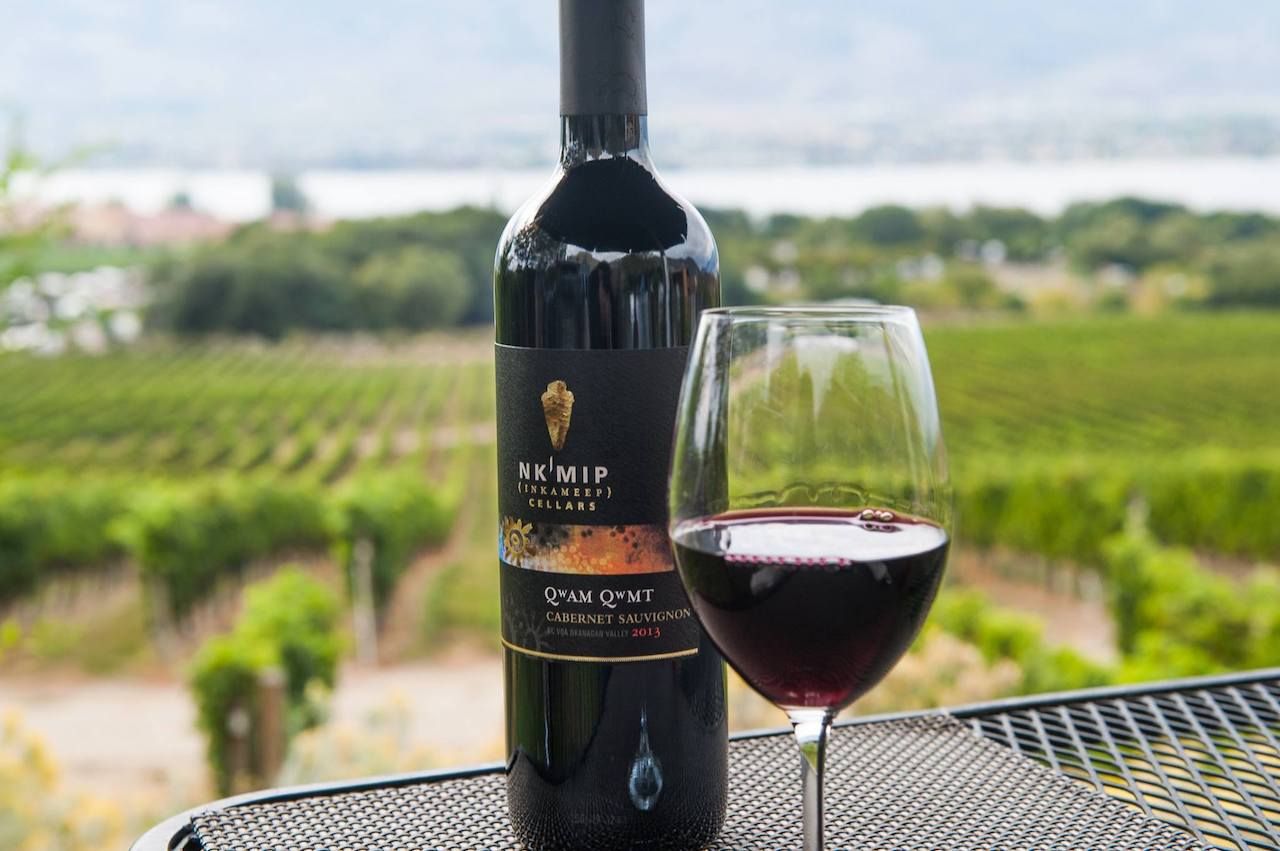 The first Indigenous-owned winery in North America, Nk’Mip Cellars offers tours and tastings on the Osoyoos reservation of southern Okanagan Valley. Opt for the Four Food Chiefs pairing to sample dishes inspired by major ingredients in Indigenous cuisine — bear, bitterroot, salmon, and Saskatoon berries — alongside wines ranging from pinot noir to riesling to rosé. For a proper meal, follow a tasting of the standard Winemaker’s Series or special Qwam Quat reserve in the wine shop with lunch at the Patio Restaurant, which whips up Indigenous staples like salmon and fry bread, as well as North American classics like burgers and mozzarella sticks for the kids. 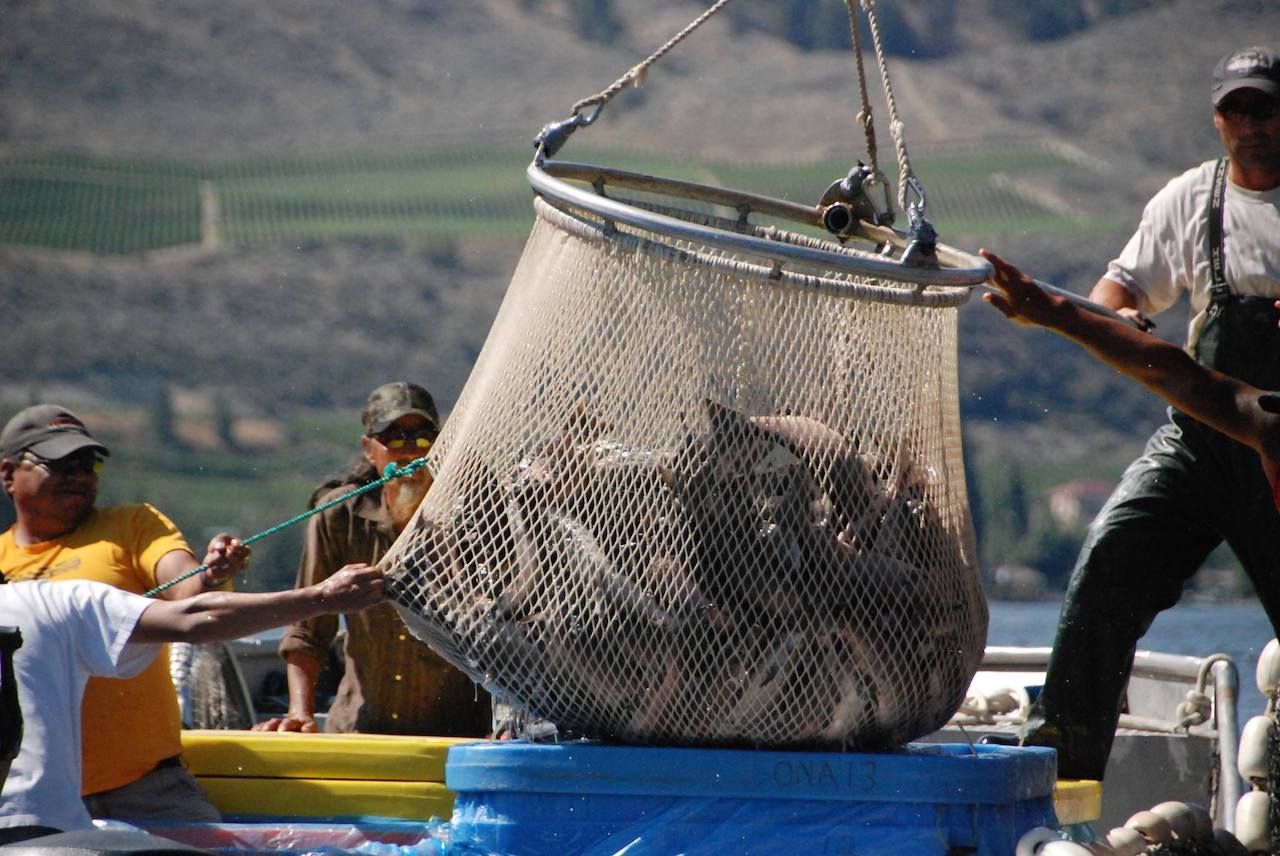 Non-drinkers can certainly enjoy a meal at First Nations wineries like Nk’Mip Cellars or Indigenous World Winery, but they might prefer a salmon tasting at Okanagan Select, instead. What started as an effort by the Okanagan Nation Alliance to restore the local sockeye salmon population and implement sustainable fishing practices has since evolved into a fun First Nations food experience in BC. Guests of the tasting room on the Westbank First Nation’s Syilx Territory in West Kelowna are invited to taste wild, responsibly sourced salmon that’s been caught, smoked, and canned by Okanagan Select and other Indigenous-owned brands, including River Select and Stellako Select. Tastings may include maple-smoked salmon, candied salmon, and salmon jerky, and can be booked Monday through Friday. 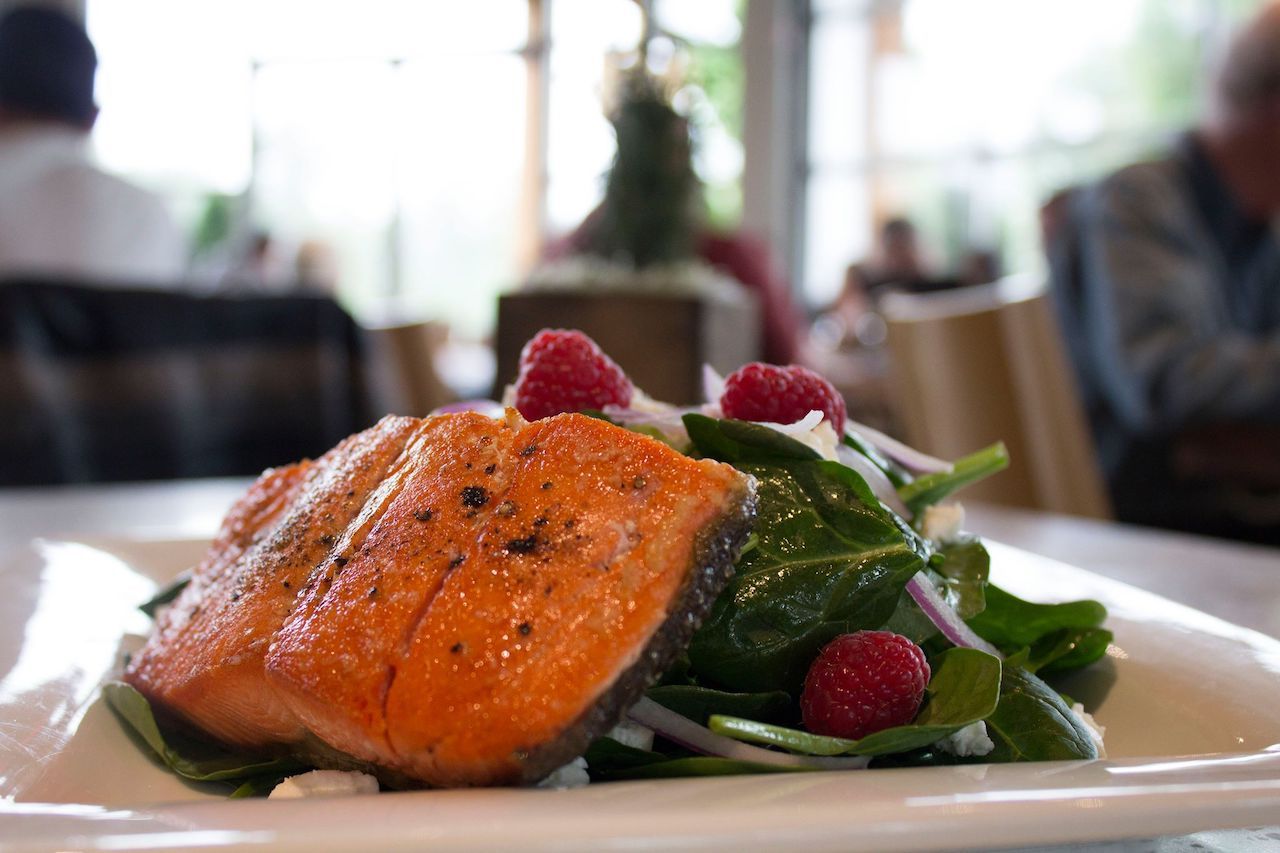 In Kwantlen, the word lelem’ loosely translates to “gathering place,” which this Indigenous-owned arts and cultural cafe in Fort Langley certainly is. The menu features breakfast items like the Salish sea breakfast sandwich, made with wild smoked salmon and whipped cream cheese on fresh bannock; lunch dishes like venison sliders and sockeye fillet; and hearty dinner fare like elk stew and salmon chowder. The space showcases lots of cedar wood, long used for more than just cooking fish, as well as artifacts like arrowheads. When you aren’t chowing down, join an educational workshop or swing by on the first Saturday of the month to see Aboriginal musicians perform. 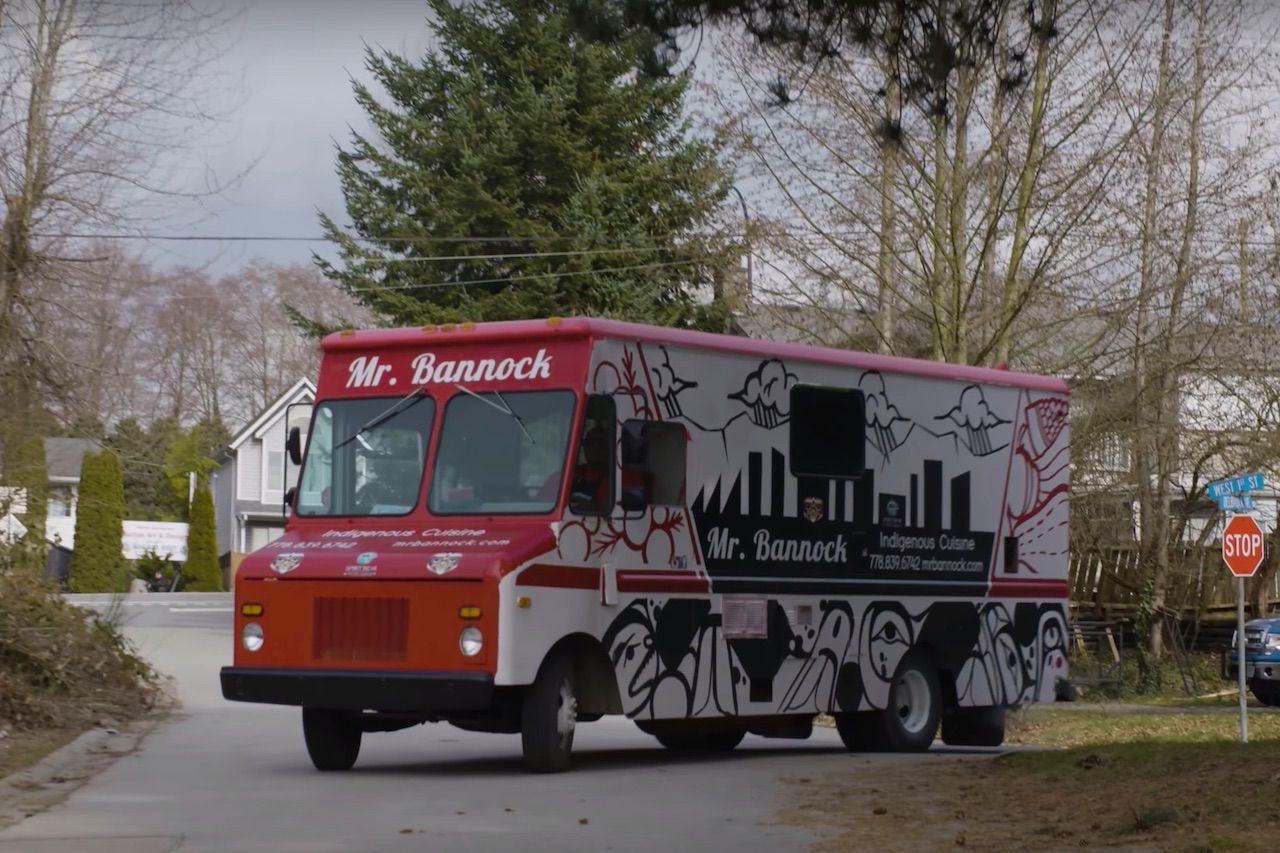 Food trucks may be a modern trend, but this Indigenous eatery on wheels is all about tradition. Bannock is the star of the show here, as you might have guessed, and it’s prepared a few different ways: fried, baked in clay, in stone ovens according to custom, and gluten-free. Of Squamish descent, chef Paul Natrall incorporates herbs and spices he grew up with, such as juniper berries. For something heartier and more on the fusion side, try creations like the beef or salmon burger, tacos, or chicken and waffles, all made with bannock as their base. Round out your order with sides like venison sausage and fresh, seasonal veggies. 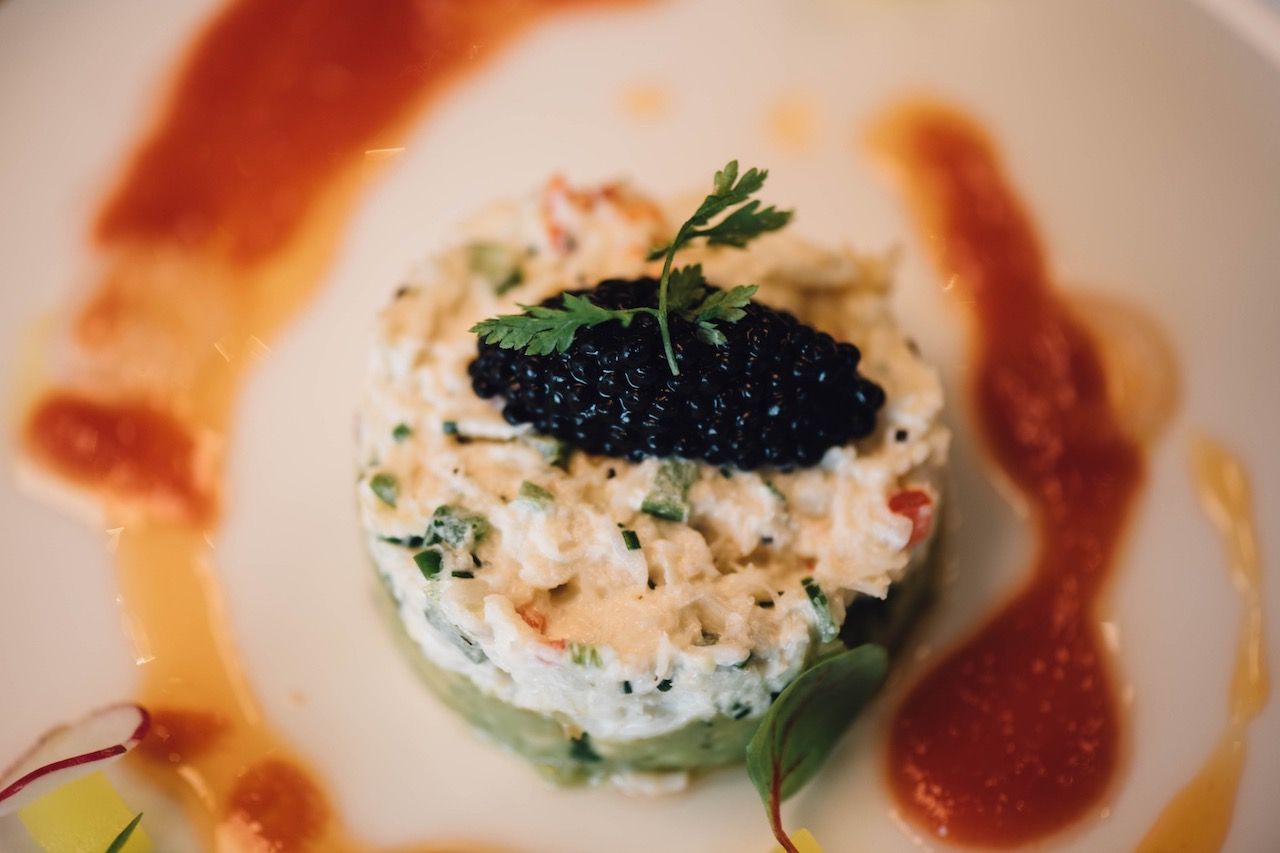 Hosted by Spirit Culinary Excursions, the Aboriginal Art and Tapas Tour is a double dose of culture, pairing the visual and culinary arts. The tour celebrates the First Nations communities of Victoria and Vancouver Island with visits to some of Victoria’s top Aboriginal art galleries, followed by Indigenous-owned wine and snacks prepared by chef Shirley Lang of the Cree Nation. Together, the artwork and food paint a tasty, historical picture of First Nations culture. 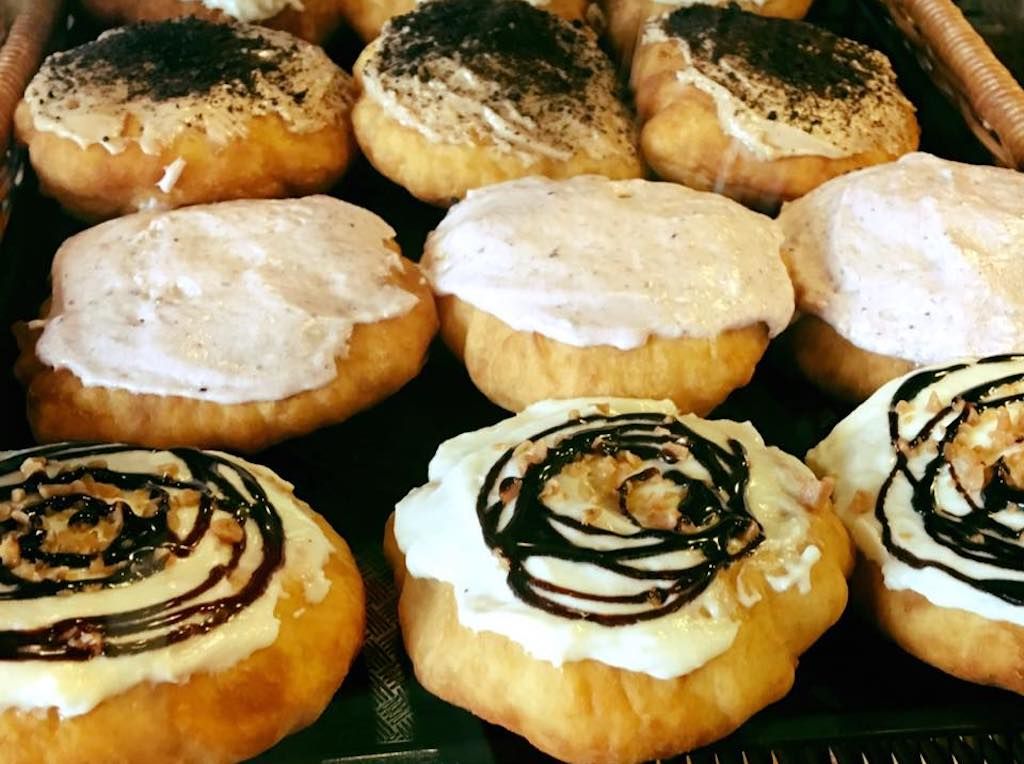 Kekuli Cafe is committed to spreading the joys of First Nations cuisine, as well as giving back to the First Nations community through donations, employment programs, and simply creating a space where Indigenous patrons are acknowledged and treated with respect. The slogan here is “Don’t Panic…We Have Bannock” — and it’s not lying. Both traditional and gourmet preparations are available, including inventions like bannockwiches and bannock tacos. To drink, get a smoothie packed with locally sourced Saskatoon berries; wine from an Indigenous-owned winery; organic, fair-trade coffee; or a BC-brewed craft beer. You’ll love the ambience here with music playing much like you’d hear at a powwow, or traditional gathering, and Aboriginal art lining the walls. Visit the second location in Merritt, BC, as well.