Walk through the streets of Florence, Italy, and you’ll be greeted not just by stunning Renaissance art, Baroque architecture, and the lyrical sound of the Italian language. You’ll also see leather everywhere: clothing stores carrying leather jackets, stationary shops vending leather-bound journals, and kiosks festooned with leather bags, wallets, and belts in every hue of the rainbow.

Leather-making in Florence dates back hundreds of years to the first leather guild established in the 13th century. Today, visitors may be aware that luxury local brands like Gucci and Salvatore Ferragamo first began by selling top-quality leather footwear and bags. But until you stroll through this refined city, you may not realize how pervasive leather is, and what the seal “Made in Italy” really means. A look at leather artisans in Florence – and discovering how you could become one yourself – will help you grasp the aura of Italian leather. 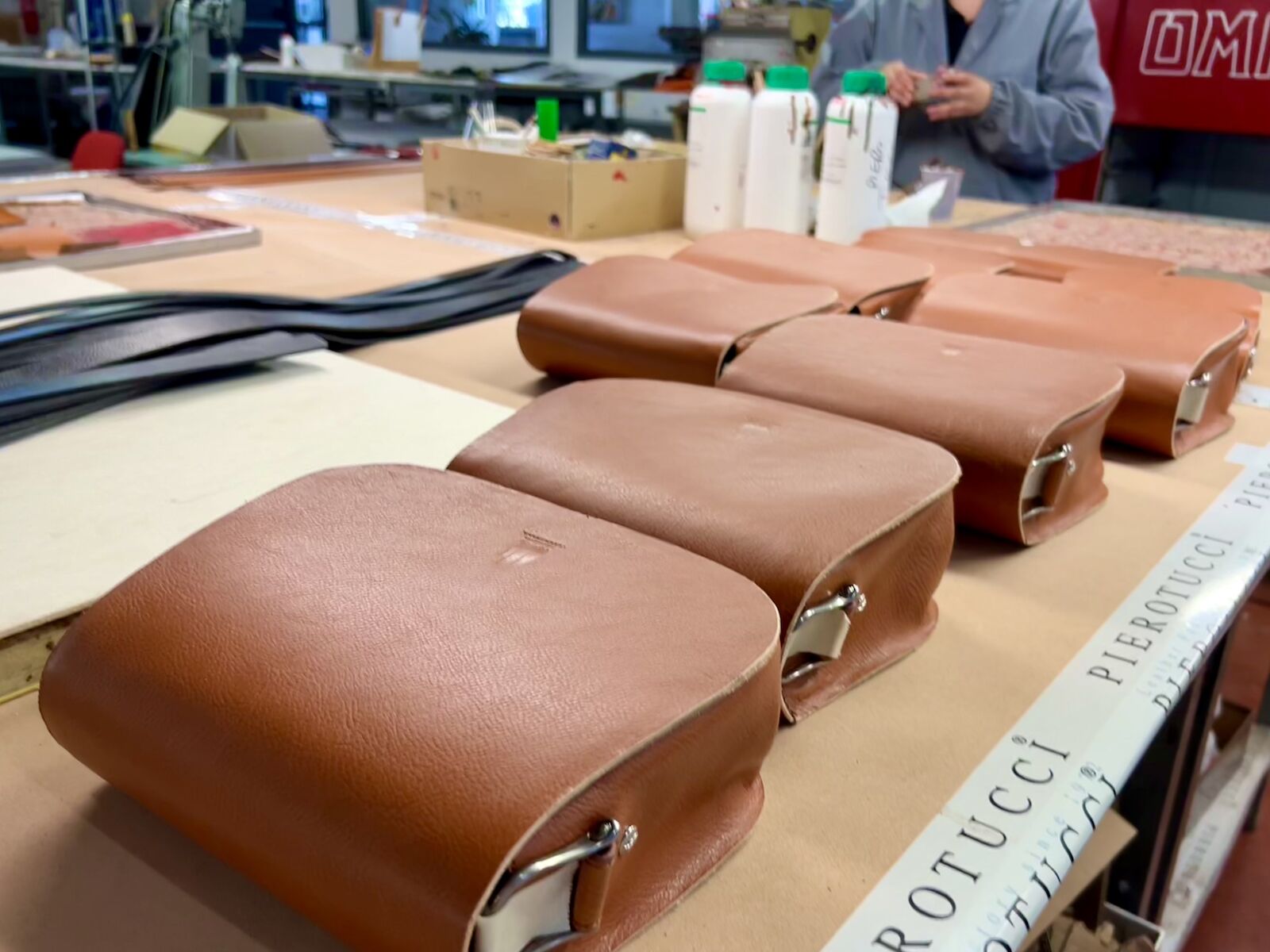 Piero Tucci began making leather bags 50 years ago. According to the company he founded, Pierotucci, he was soon making leather goods for such companies as Valentino, Cole-Haan, and Hugo Boss. As his business grew, the company moved into larger facilities a 15-minute drive over the wooded hills from central Florence. Reserve online to join a free tour of the Pierotucci factory and you’ll get a deep dive into the process of making an Italian handbag. Marco Tucci now runs the business with his brother, Matteo Tucci, and had a clear purpose when they decided to open the factory to visitors.

“In our opinion, it’s nice to see how we select the leather, to [understand]… how the tannery process works,” Marco said. “We give them some information on how the items that they can find everywhere are being manufactured, so they see a real craftsman, how he or she works.” 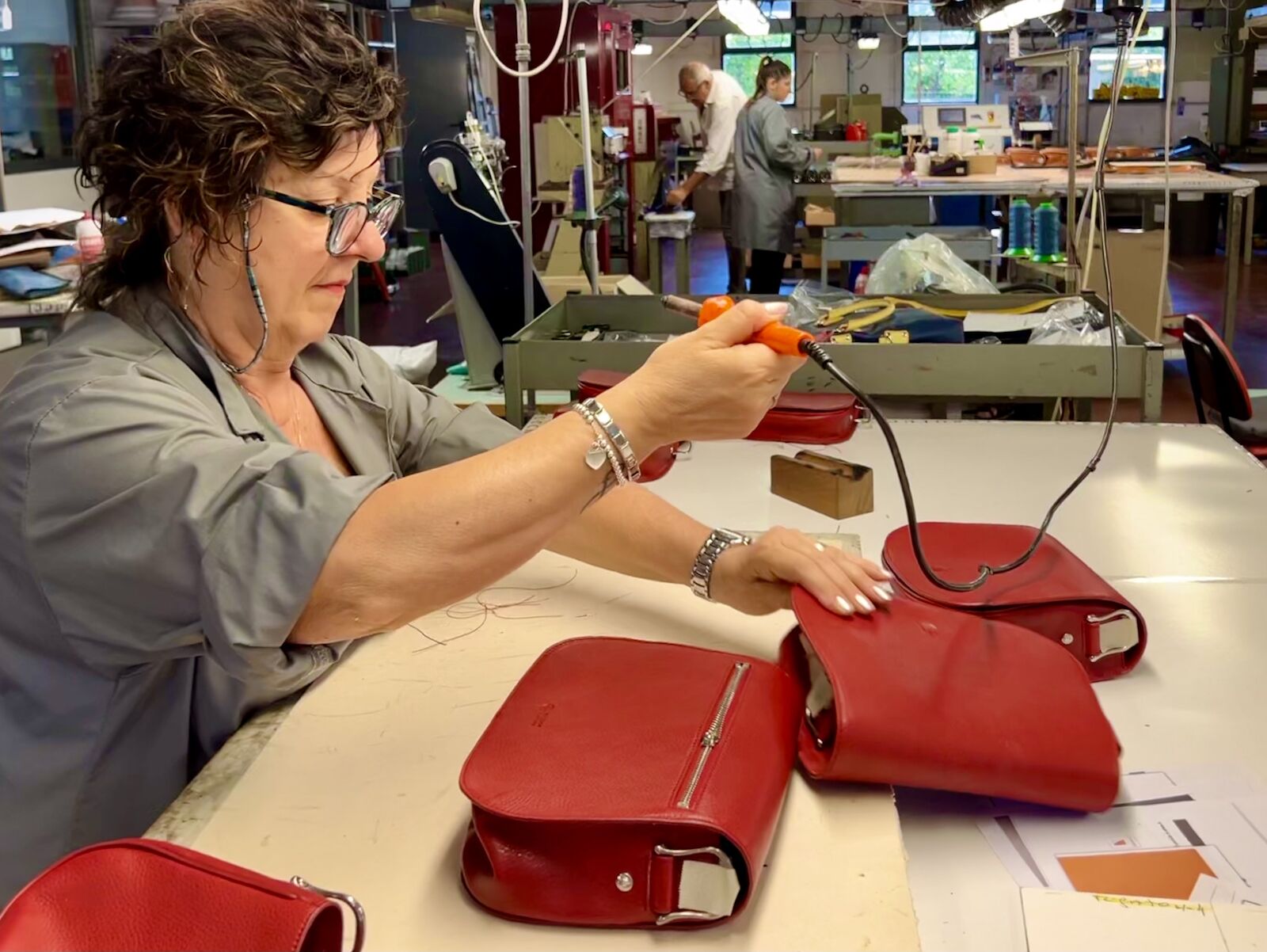 For Tucci, a look at the painstaking process of making a handbag lends appreciation of what “Made in Italy” really means. My private tour of the factory, which feels more like a large workshop, began with a look at expansive racks of multi-colored leather – some naturally dyed and some tinted with synthetic chroma dyes. Pierotucci buys its lamb and cow leather from tanneries that were long ago moved out of Florence.

I learned that cow leather is categorized into two categories: more pliable leather from 18-month-old cattle, and sturdier stuff from 24-month-olds. Also, different parts of a cow lend leather particular characteristics, and the leather used depends on the type of bag that’s being made. As to leather jackets, my guide insisted only lamb leather should be used, given its lightness; she felt that oft-used buffalo leather is much too heavy. 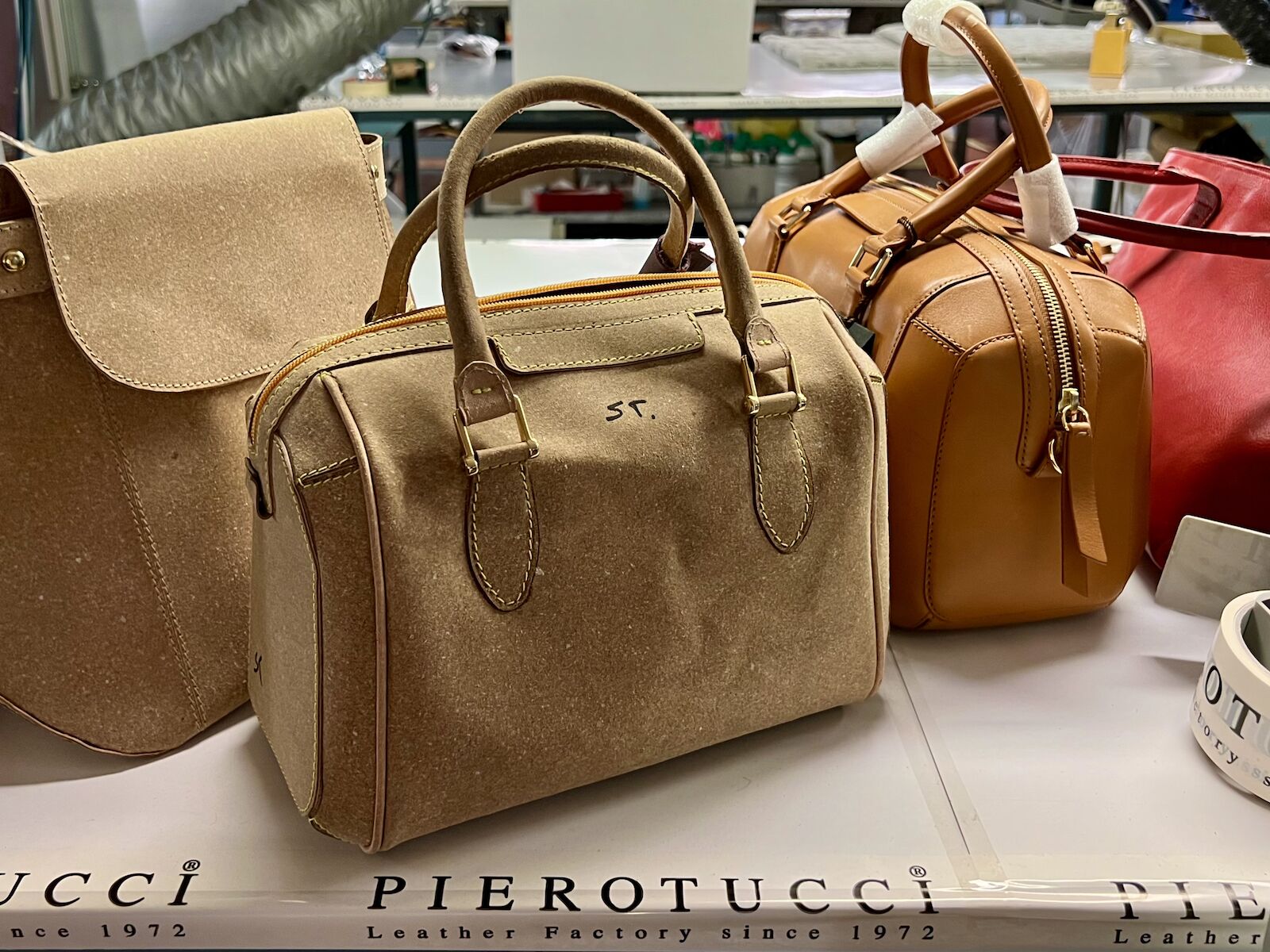 On the tour, it’s explained that even the most workable leather needs to be stripped to a specified thinness at the seams where it’s sewn together. Before that happens, though, all new bag designs are first tested with cardboard mockups to see how it would look and wear. The ultimate lesson in this factory tour, though, is that “90 percent of the work is really done by hand.”

The craftspeople I’d met had been working for Pierotucci for decades; one told me that making a single bag from start to finish would take her well more than a day. After seeing what it takes to make a bag by hand, you’ll no longer wonder why Pierotucci prices come with two zeros at the end. And you’ll know that if you do spend the money, the bag will last forever. 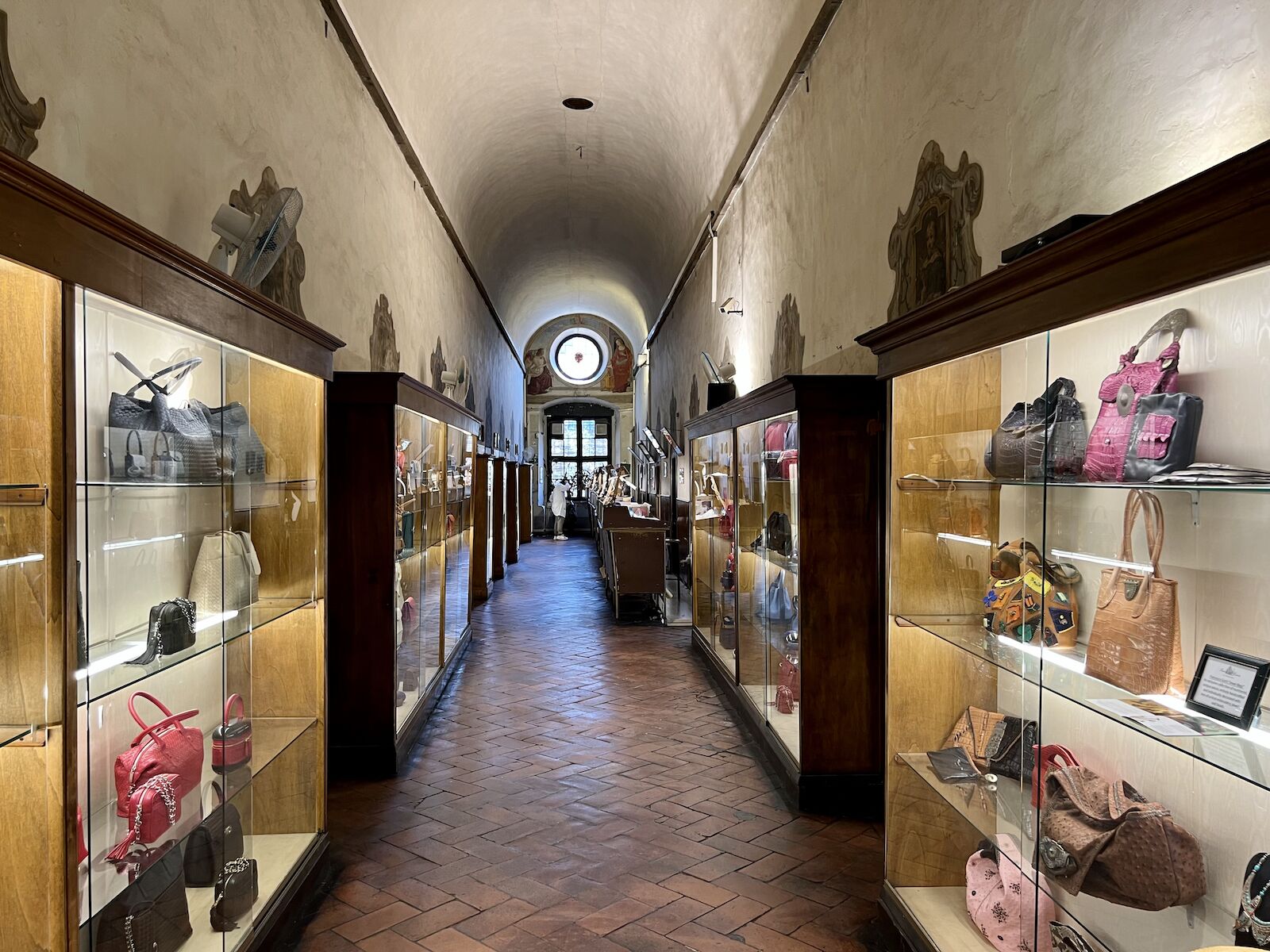 Walking into the courtyard of the Scuola del Cuoio in Santa Croce, the historic center of leather-working in Florence, feels a little like walking onto a mini college campus. You leave the bustle of the street as you walk past a wooded park and enter the historic building – in this case, a repurposed monastery. It turns out that Scuola del Cuoio, or School of Leather, was founded by monks and leather artisans after World War II to teach war orphans a trade.

Today, the school still offers “scholarships to people that need help, poor people, or with mental disease, that will join the school for a nine-month course,” said Beatriz Parri Gori, the granddaughter of one of the school’s founders, Marcello Gori. She was showing around a Hollywood TV couple, who were discreetly Covid-masked and who were following a long line of bold-faced names who have visited the school.

The Scuola del Cuoio also specializes in making one-of-a-kind bags and in teaching paying students the secrets of high-quality leather working. One of those students was an energetic, white-haired senior from Australia, Alison Bruce, who was taking her third course at Scuola del Cuoio – this one 10-weeks long. She had just finished making a fetching chocolate and teal-toned bag in the workshop downstairs, and had come upstairs to have leather artisan Francesco Galleni brand it with her own signature seal that she’d made. 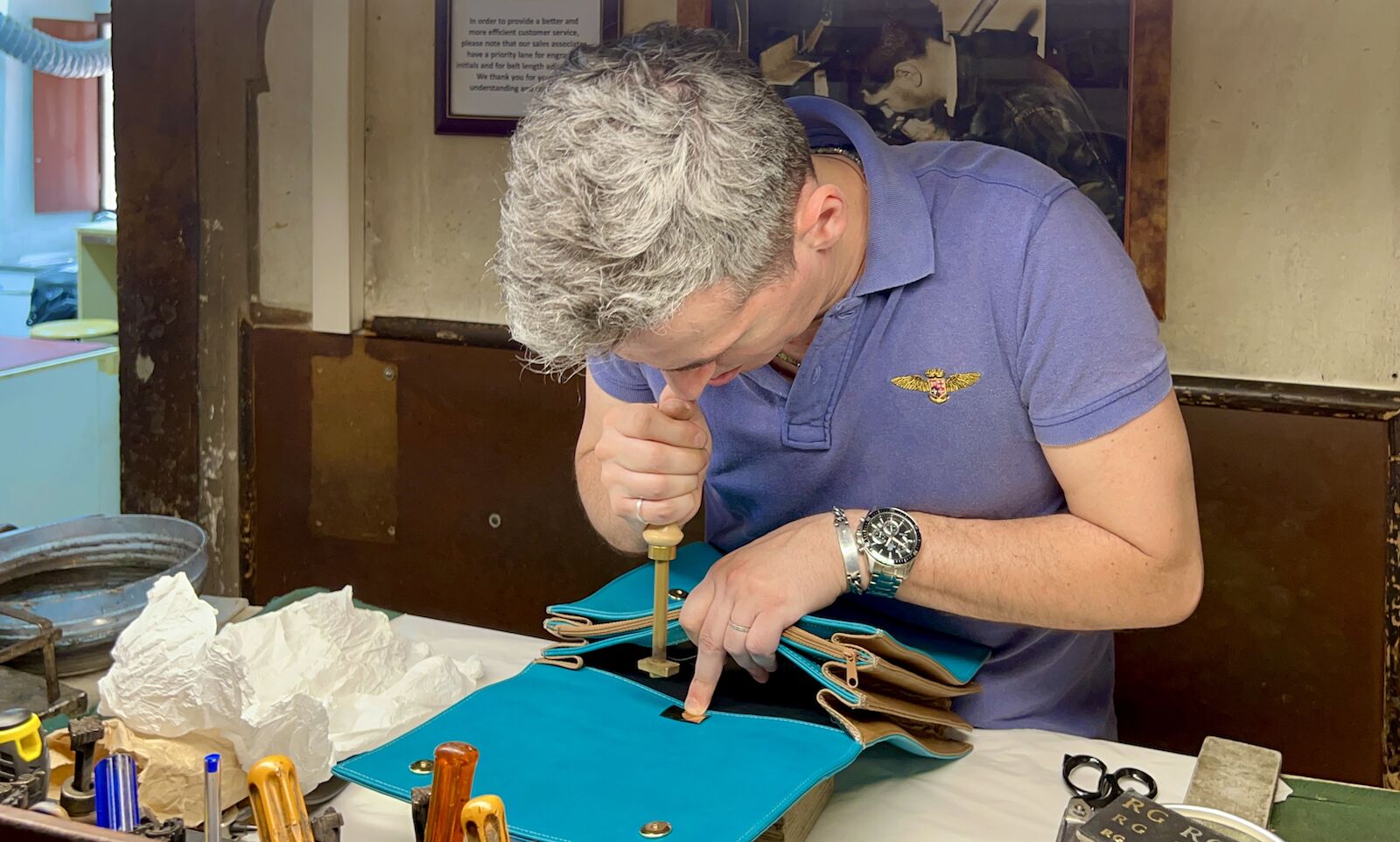 Galleni attached Bruce’s seal to a spike, heated it to a high temperature, and then placed a piece of gold leaf onto the spot inside the bag where she wanted the seal. He pressed down onto the gold leaf, and the seal was imprinted. Alison Bruce’s bag was complete.

“The quality of instruction is exceptional,” Bruce said. “We’ve got a Japanese teacher who’s been here 30 years. And the two others, one’s a Canadian handbag maker and the other one’s a Brazilian. So it’s very international.”

Some artisans I spoke with expressed that they worry about the loss of handcrafting skills in Italy, but at least Galleni – the artisan who burned the finishing gold seal onto the handbag – said he’s happy to be a part of the school. Following in his father’s footsteps, the 38-year-old Galleni has worked at Scuola del Cuoio for 20 years. While the more intense leather-working goes on in the studio below, he said he prefers working upstairs since it’s open to the public and he gets to meet more people.

Inspired, I went to the front of the Scuola, purchased a lovely black belt as a gift, and had Galleni burnish it inside with my loved one’s initials. Rather than gold, though, I chose the silver leaf.

Visit the most famous bespoke shoe store in the world 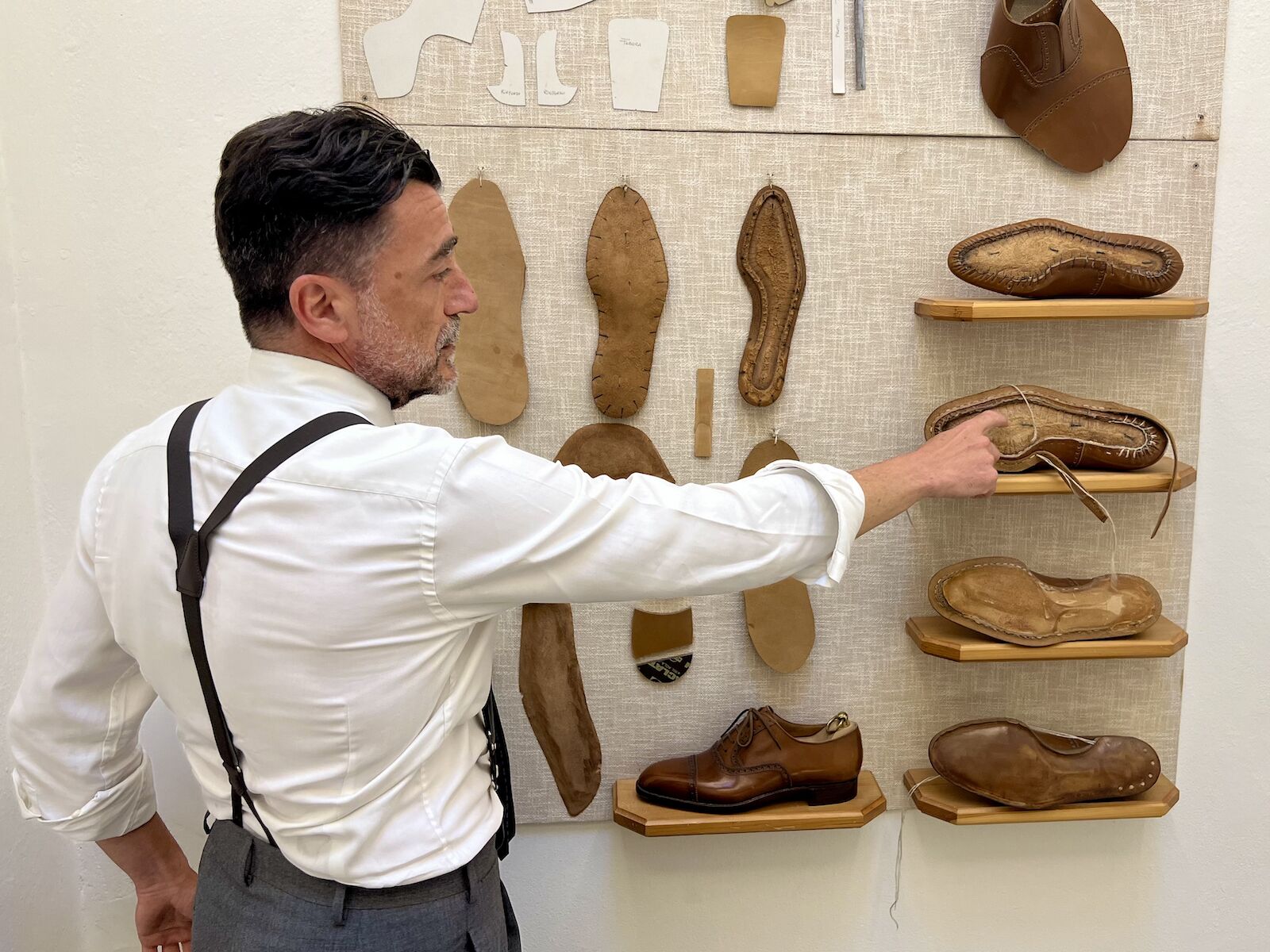 Stefano Bemer was already famous for its bespoke shoes and hand-tailored suits when Daniel Day-Lewis learned about the brand. Day-Lewis was so impressed with the craftsmanship that he decided to learn the skills himself. Stefano Bemer offers six-month apprenticeships, but Day-Lewis stayed for 10 months, leaving Martin Scorcese waiting for him to begin filming Gangs of New York, according to Tommaso Capozzoli, who took me upstairs to see the pale-blue wood chair on which Day-Lewis sat for nearly a year, learning to handmake a pair of shoes.

Capozzoli was an old friend of Stefano Bemer and began working with him only two years before Bemer died in 2012, at the age of 48. Today, the store is owned by a family member connected to the Scuola del Cuoio, and like the Scuola, it’s housed in a formerly religious institution – in this case, a church. When you enter the store, though, church isn’t exactly what comes to mind. 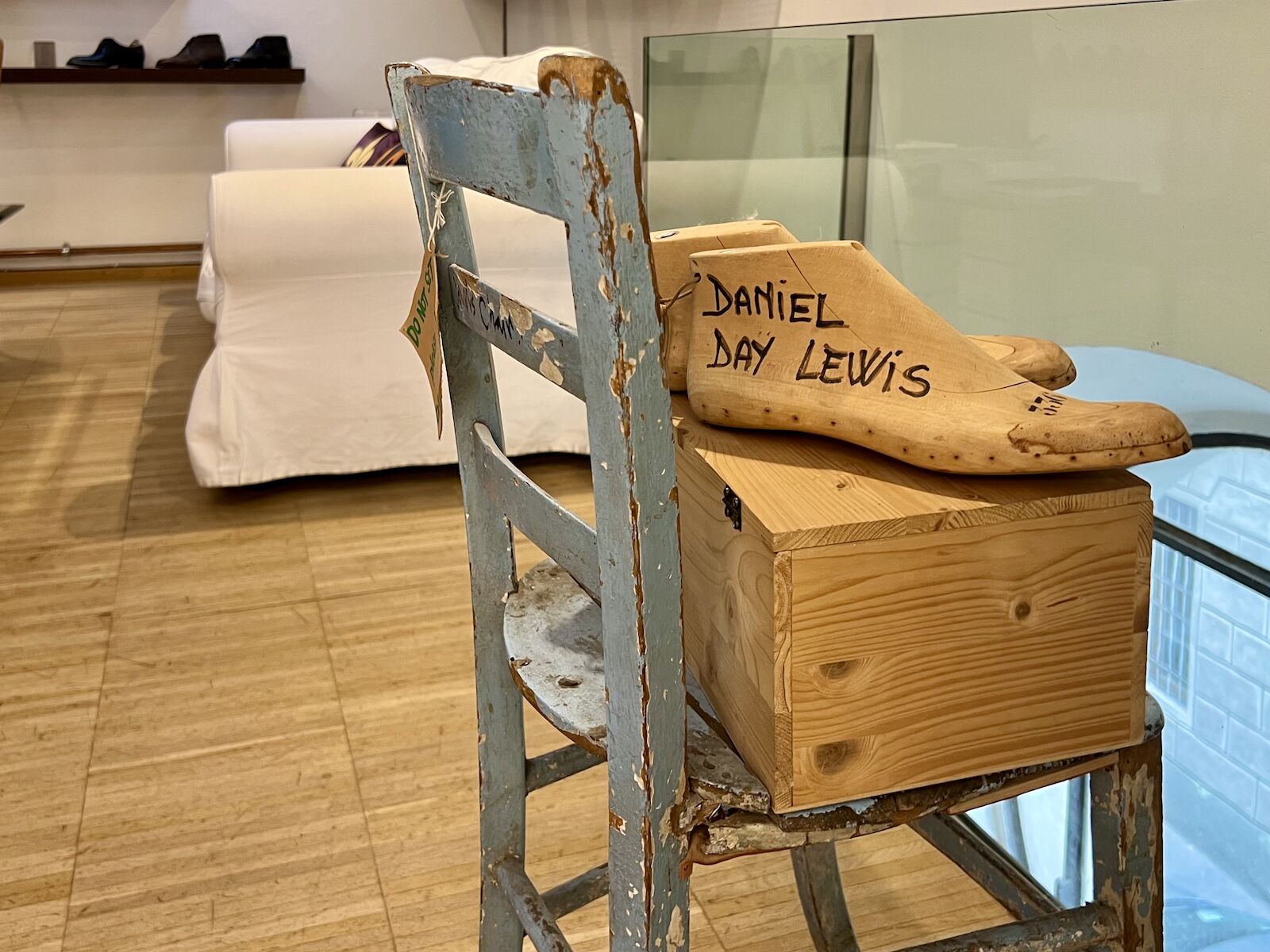 The hyper-elegant store that sells shoes that cost hundreds, and in some cases thousands, of dollars is also where apprentices learn their skills: in the front section of the store, visible as soon as you enter. They’re surrounded by shoe molds attached to vertical wooden beams above handsome shoes displayed on shelves below. The effect is brilliant, emphasizing the handmaid nature of the work, although it can get loud when one of the few apprentices seated there is hammering nails into a sole.

Capozzoli said that although the apprenticeships are six-months long, it takes six to seven years to become a master shoemaker. Likewise, the tailor they have upstairs has been making suits for 70 years.

“Our tailor is 84 now,” Capozzoli said. “So he started when he was like 11 or 12. It’s a level of experience and skills that are not replaceable. We launched our school because of that.”

While Capozzoli fears that these skills are dying in Italy, it seems possible that at least some of the students who come from around the world will choose to stay. After all, people still want the Made in Italy label, and students can continue to learn from the country’s artisans after completing an apprenticeship. 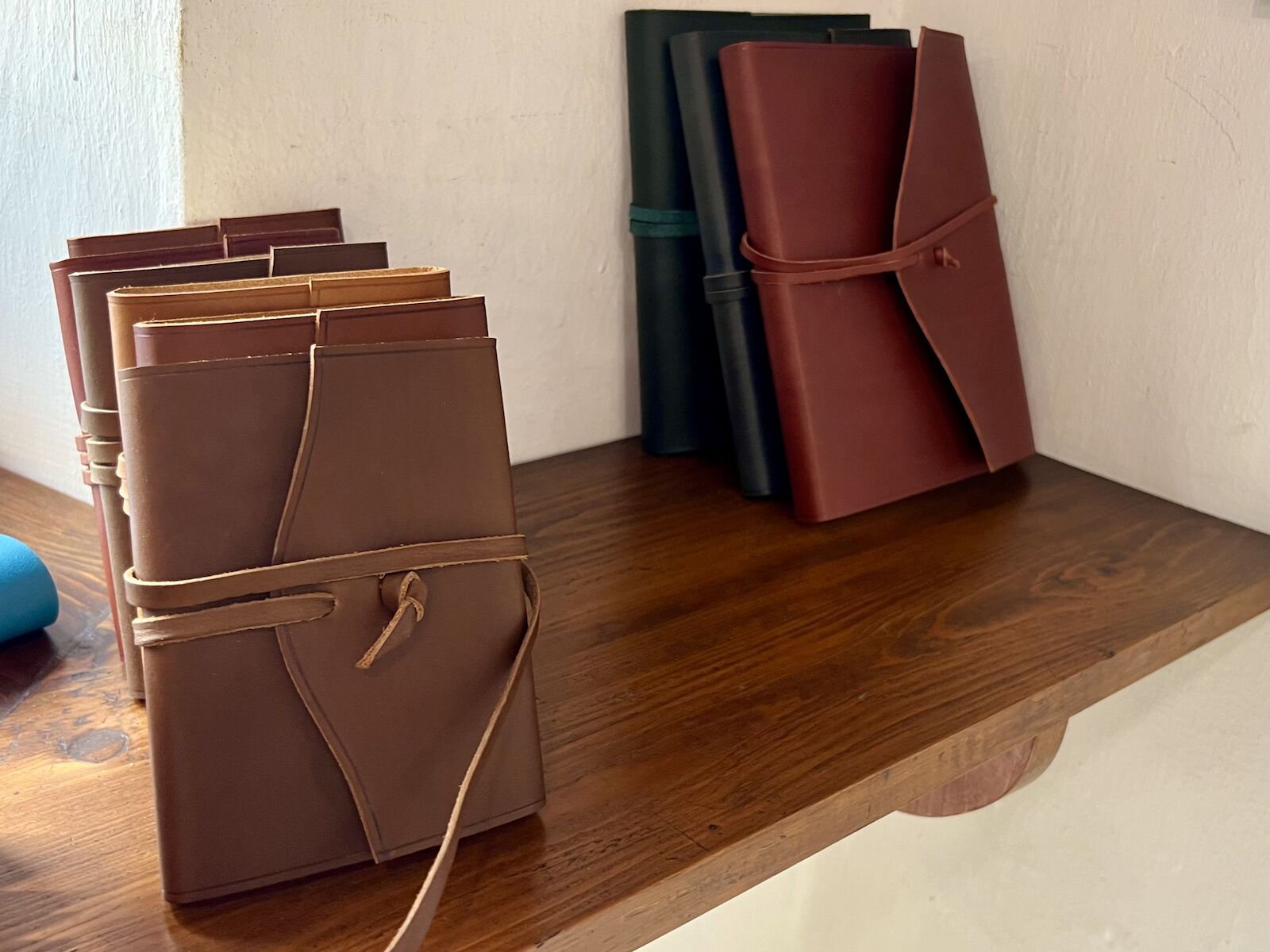 Il Torchio is a 10-minute walk from the Stefano Bemer shoe store in the artisan-rich Oltrarno neighborhood. This beautiful bookbinding store is run by Erin Ciulla, a Canadian who studied design in Toronto.

If you ask Ciulla, she might take you to see the “guillotine” in the back room. I was expecting something macabre, but the guillotine is actually a very large, antique-looking machine that’s used to cut large amounts of paper. Beyond binding with leather covers, Ciulla also covers books, journals, and photo albums in decorative marbled papers that are made by hand in Florence.

Although Ciulla’s father is from Sicily, she exemplifies the expat who learned an artisan trade and stayed. She discovered the craft of Florentine bookbinding while studying abroad there in college. After returning to Canada, she came back to apprentice with Anna Anichini, who began the store over 40 years ago. Now, Ciulla runs the business.

Over 100 colleges offer exchange programs in Florence, so this is one way that foreign students can discover the city’s rich artisan tradition. Perhaps some of them will come back to learn those handcrafted skills and will keep them alive – either in their home countries or in the alluring, culture-rich city of Florence itself.

TravelThe Best Place To Go in Italy for Every Type of Traveler
Tagged
Travel Florence, Italy Italy
What did you think of this story?
Meh
Good
Awesome

Tourists Are Falling for This Scam All Over Florence, Italy
25 Dreamiest Airbnbs in Italy