Florida generally gives about as much regard to its history as its people do to common sense. That said, though the state has bulldozed much of its past for condos, some of the grandest structures ever built in America still remain there. Even before the advent of air conditioning, Florida was a popular winter retreat for wealthy northerners, particularly during the period between the Civil War and the Great Depression, much of which is known as the “Gilded Age.”

During this time, grand palaces throughout the Sunshine State popped up, from luxury hotels along the beaches to mansions on sprawling orange groves. A handful are still in operation, like the Biltmore, Breakers, and Boca Raton Resort hotels. But most are now museums or parks that give you a glimpse into the early days of Florida luxury. Visiting them is as much a lesson in Florida history as it is a study of century-old opulence. And all are worth a visit when your sunburn is too bad for another beach day.

When Midwestern socialite James Deering was diagnosed with pernicious anemia and prescribed sunshine and warm weather, he abandoned his mansion on Chicago’s Lakeshore Drive during colder months and built this palace on Biscayne Bay. The Italian-style villa was constructed between 1914 and 1922, and it features 34 rooms, including nine guest suites. Each suite looks out onto the home’s central courtyard, Vizcaya’s social hub, which originally had open air.

The grand Mediterranean architecture and luxe original furniture (Deering traveled to Europe during construction to gather Louis XV and Chinoiserie pieces, among others) add layers of sophistication to this home, but the gardens are by far its crown jewel. On pleasant winter Miami days, you can stroll the French-inspired hedge maze or the Italian walled garden, marveling at the fountains, perfect hedges, and gazebos that leave you feeling a world away from downtown, which is only a mile north. 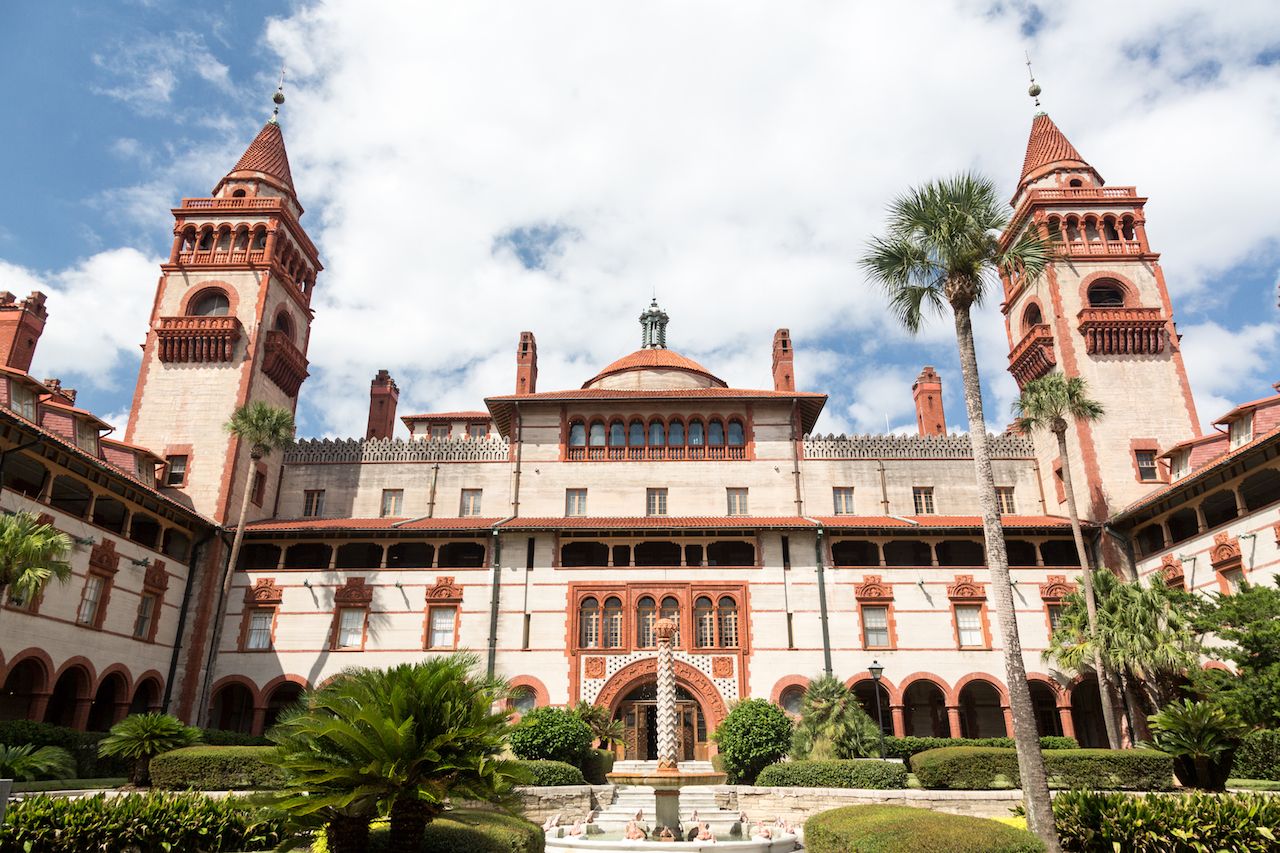 After conquering the oil world by co-founding Standard Oil with John D. Rockefeller, Henry Flagler set his sights on conquering Florida. In addition to effectively opening the state to commerce with his railroad, Flagler also opened a succession of grand luxury hotels luring cold northerners south. The first of these was the Ponce Del Leon, set in Florida’s most historic city: St. Augustine. When it opened in 1888 it was a marvel of the time, featuring electricity in every room and steam-powered heat. Of course, in true Florida fashion, both offered a lot of style and not much substance. Heat in Florida is about as useful as a snowboard, and the electricity used direct current, which often caused lightbulbs to explode. Flagler had to hire staff to turn guests’ electrical switches the explosions scared them so much.

Still, the place was an architectural marvel, with a grand fountain in the center that appears as a sundial from above, a gold-work ceiling, and a main dining room with the largest private collection of Tiffany stained glass in the world. The hotel was the odd Gilded Age luxury resort to make it through the Depression and served as a Coast Guard training center during World War II. In 1968, it became the center of Flagler College, and you can still visit if you find yourself in town. 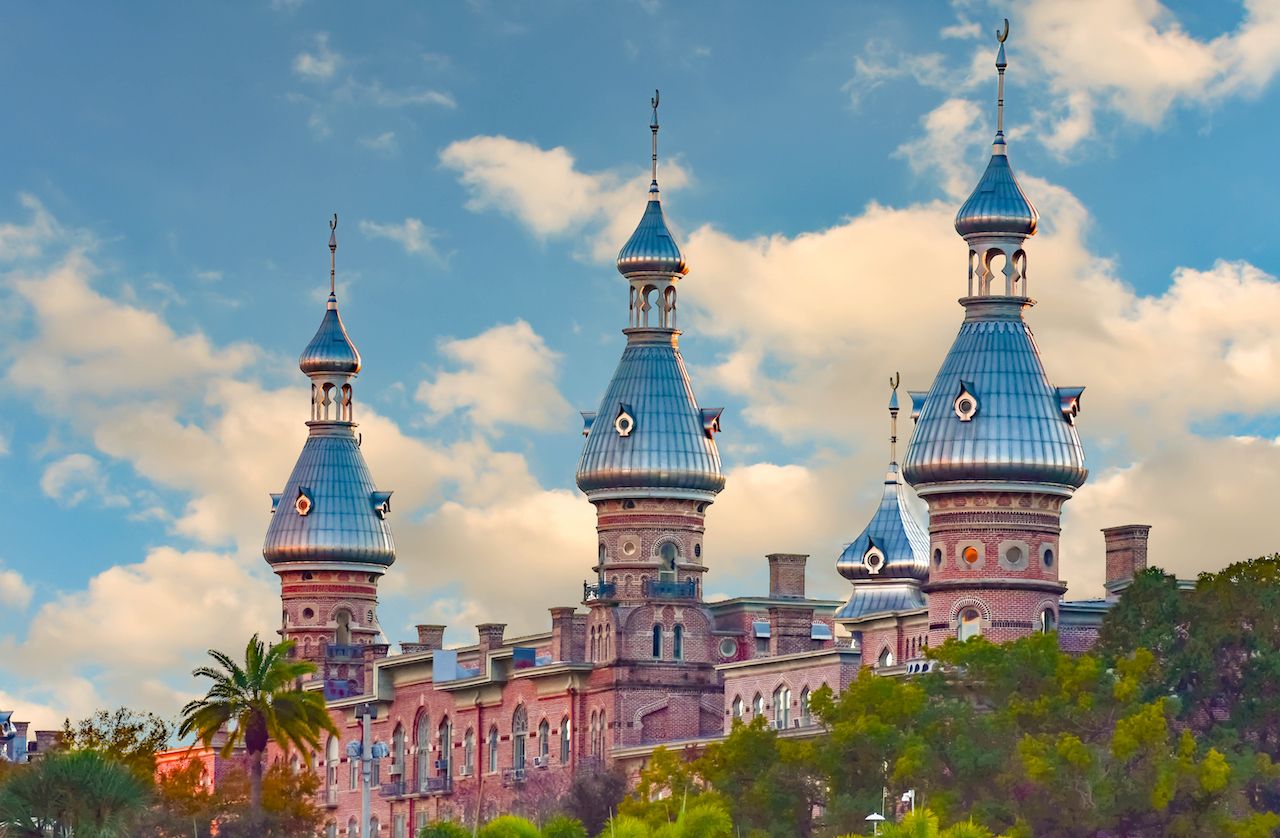 Before it had a gleaming modern skyline, Tampa’s most iconic building was the minaret-topped Tampa Bay Hotel. The vision of railroad and steamship magnate Henry Plant, the 511-room, quarter-mile-long hotel was designed as a resting point at the junction of his train and ship empires, where guests could relax after their journeys from the north before boarding a ship to Cuba. The five-level hotel cost $3 million to build in 1891 — about $75 million today — all of which was Plant’s money as investors thought the project’s scope too risky.

During its prime it was a marvel of technology, boasting some of the first elevators in Florida, electricity, and a fully concrete construction. It had suites of up to seven rooms, providing Florida with its most luxurious digs at the turn of the century. When the depression hit, the market for ultra-luxury hotels fizzled, and the University of Tampa moved in in 1933. It still operates the old hotel as a historic museum, complete with the original Victorian-era furnishings. 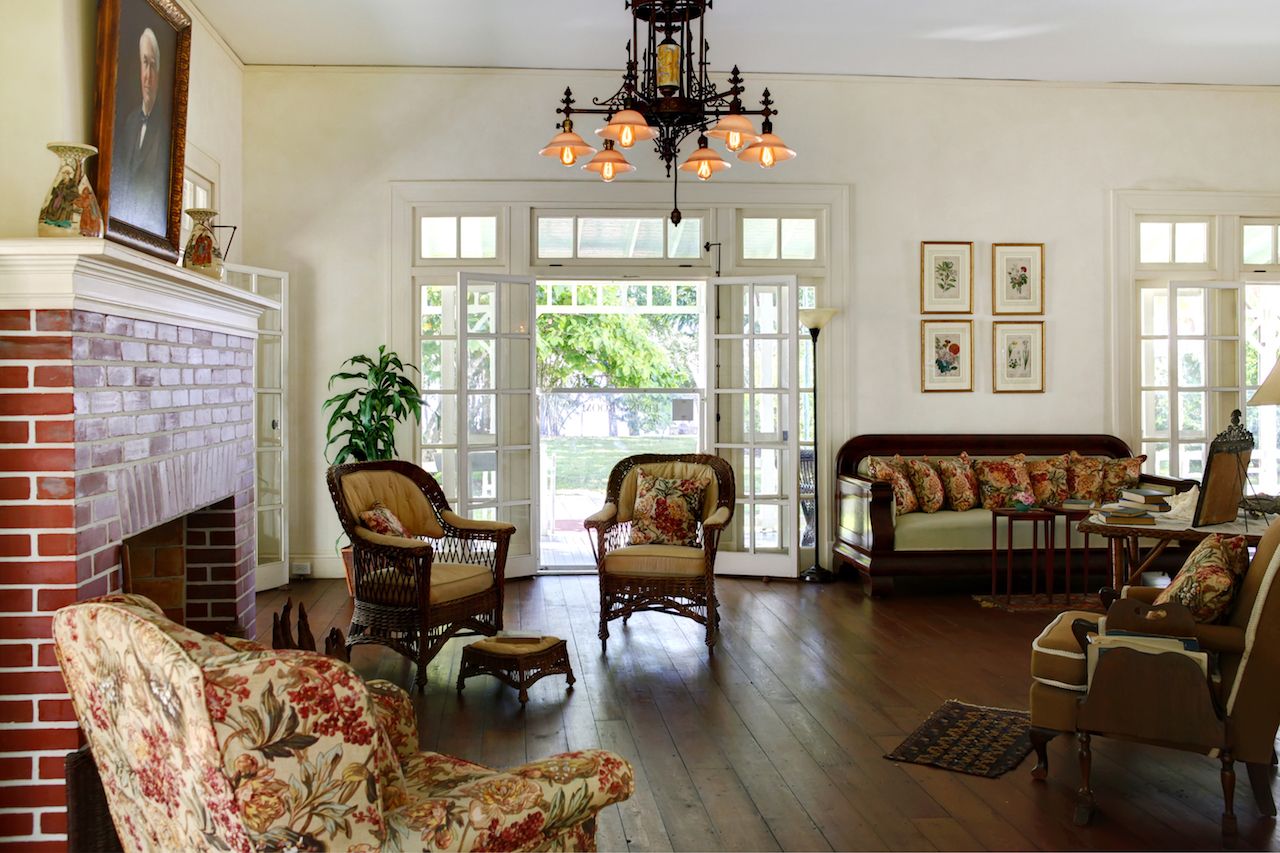 Imagine, if you will, Jeff Bezos and Bill Gates built houses right next to each other on the Seattle waterfront. That’s effectively what happened on Caloosahatchee River. Thomas Edison, who invented the light bulb, purchased 13 acres along the river in 1886 where he constructed his lavish winter home. The home’s style is more Floridian than other Gilded Age palaces, opting for plantation-style structures with wood sides and wrap-around porches. Edison’s compound also includes a guest house, which once housed luminaries from Harvey Firestone to Herbert Hoover. Plus a caretaker’s house and swimming pool complex that was one of the first residential pools in Florida.

One of Edison’s frequent guests was Henry Ford, who you may recall invented the automobile. Not loving the Detroit winters, Ford also sought a winter escape and was so inspired by Edison’s home he bought the house next door in 1914. The two-story craftsman home isn’t as impressive as Edison’s compound, but it does have a garage with original Fords, and Edison’s Model T is on display at the estates’ museum. You can also walk through 20 acres of tropical gardens, including 1,700 plants from 400 different species. 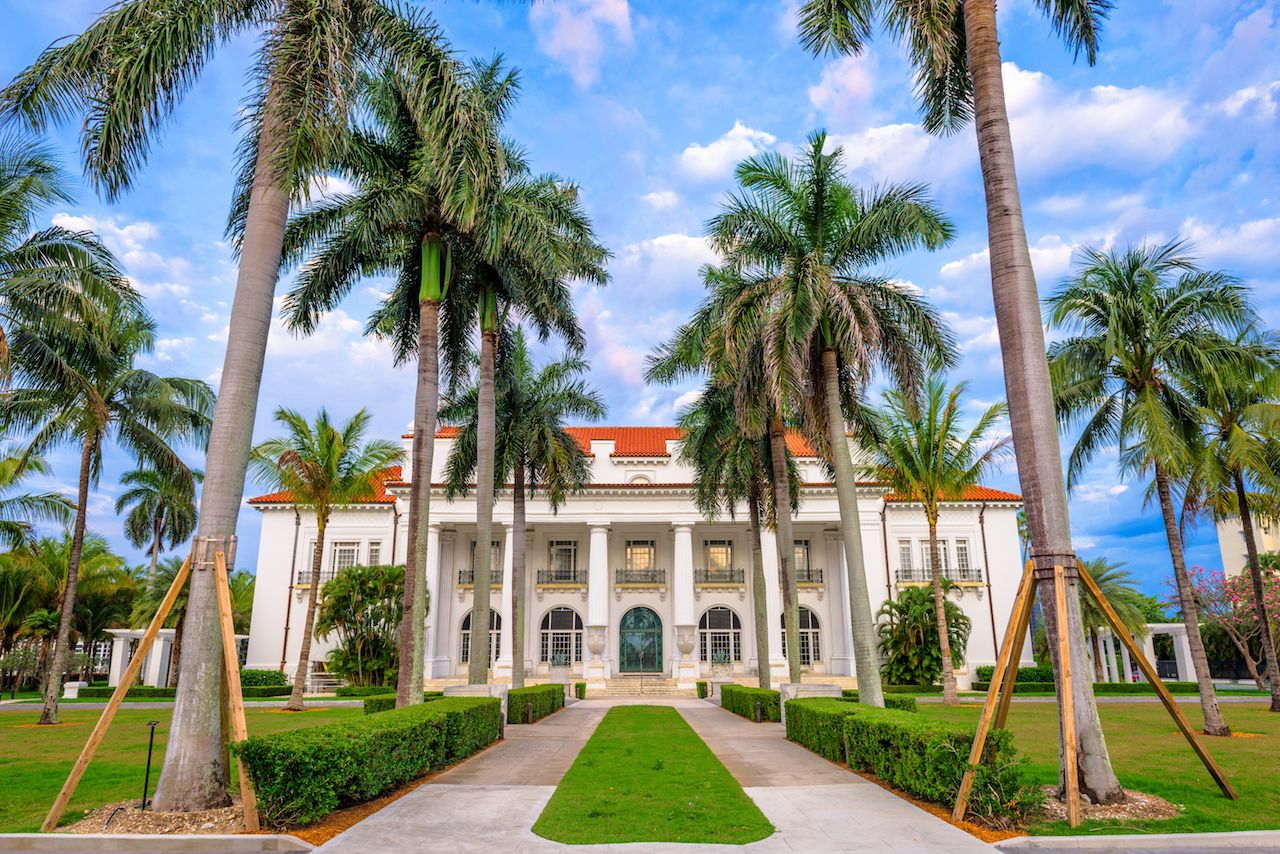 It seems only appropriate that the tycoon who had the greatest influence on the development of Florida would also have its grandest home. Henry Flagler — the oil and railroad king who expanded the East Coast Railroad south into Florida — built this Palm Beach mansion as a wedding gift to this third wife Mary Lily. It stands like a grand Roman temple on the banks of Lake Worth, with white columns welcoming visitors into a massive main receiving room complete with life-sized portraits of the original owners.

The beaux-arts mansion spans 55 rooms and 60,000 square feet, centered around a golden ballroom on the first level that was the epicenter of early 20th-century winter society. Other rooms all have unique styles from Louis XIV, XV, and XVI to Italian Renaissance and, in one case, obscenely tropical. Though Flagler only spent 11 winters here from 1903-1913 when he passed away, Mary Lily spent four more years here before never returning. Her niece sold Whitehall, which became a hotel with a 12-story tower for a while, then sat in disrepair. In 1959, Flagler’s granddaughter Jean Flagler Matthews created a non-profit foundation to restore the mansion as a historic museum. It’s been one since 1960, complete with Flagler’s private rail car adjacent to the main house. 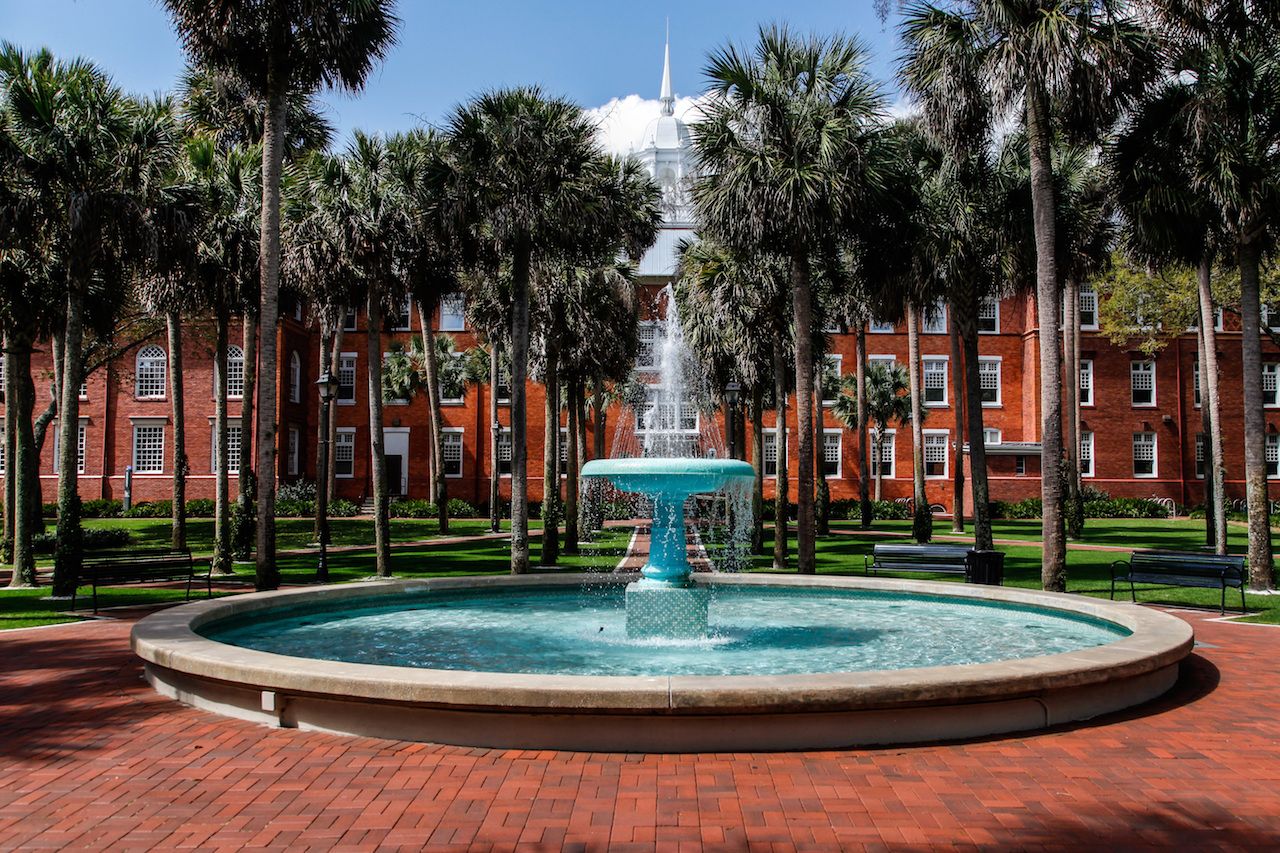 Known as “The House that Hats Built,” this 9,000-square foot mansion was Florida’s first grand luxury home in 1886. The home of hat magnate John B. Stetson, it once sat on a 300-acre orange grove, and Henry Flagler even built a special rail spur to it so the product could be transported. The High Victorian, three-story structure occupies nearly two acres by itself, with a Polynesian-style schoolhouse next to it, originally built to educate the Stetson children. The home was also among the first in Florida to be fully electric (Stetson was friends with Thomas Edison) and feature pressurized indoor plumbing that brought running water all the way to the third floor.

The house was lost and mostly forgotten about until it underwent a massive restoration project in 2008, creating a private residence that is now occasionally open to the public. The owners of the home allow guests to sit in the furniture, tour the home, and visit the third-floor museum of Stetson artifacts — but only a few days a week and at differing times. Though it’s the rare Gilded Age mansion you’ll actually be able to sit down in, it’s not a formal museum or hotel. Though if you can get here during Christmas it’s one of the grandest holiday attractions in the state. 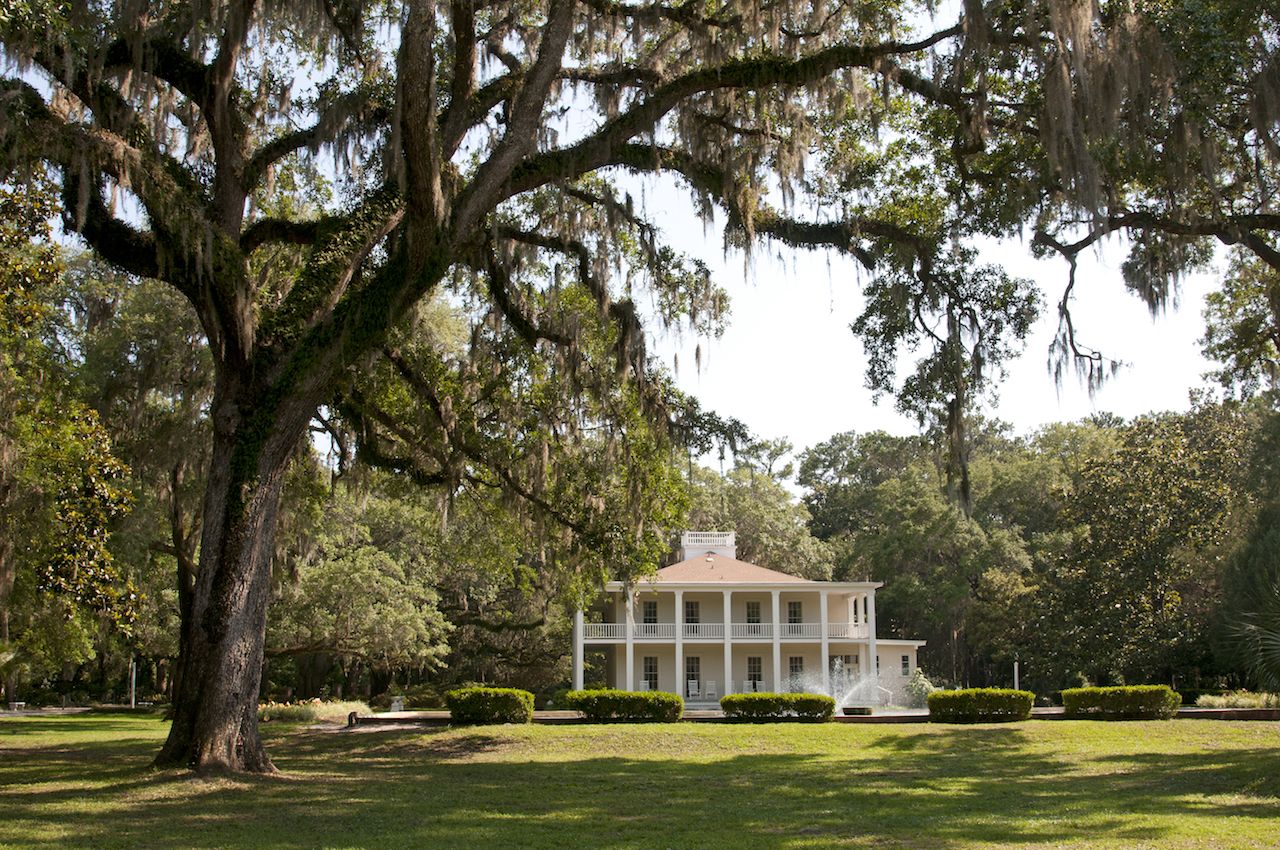 Though this two-story Antebellum home nestled in Eden Gardens State Park near Ft. Walton is a masterpiece of restoration, with its original Yellow Heart Pine siding still intact, the interior is far and away its most impressive feature. When Lois Maxon restored the place almost 60 years ago, she filled it with her extensive private collection of Louis XVI furniture, the second-largest collection in the United States.

The house, built by timber magnate William Henry Wesley, still has 95 percent of its original windows, a tribute to the passion behind Maxon’s million-dollar renovation. It’s currently open for public tours and is closed Tuesdays and Wednesdays. 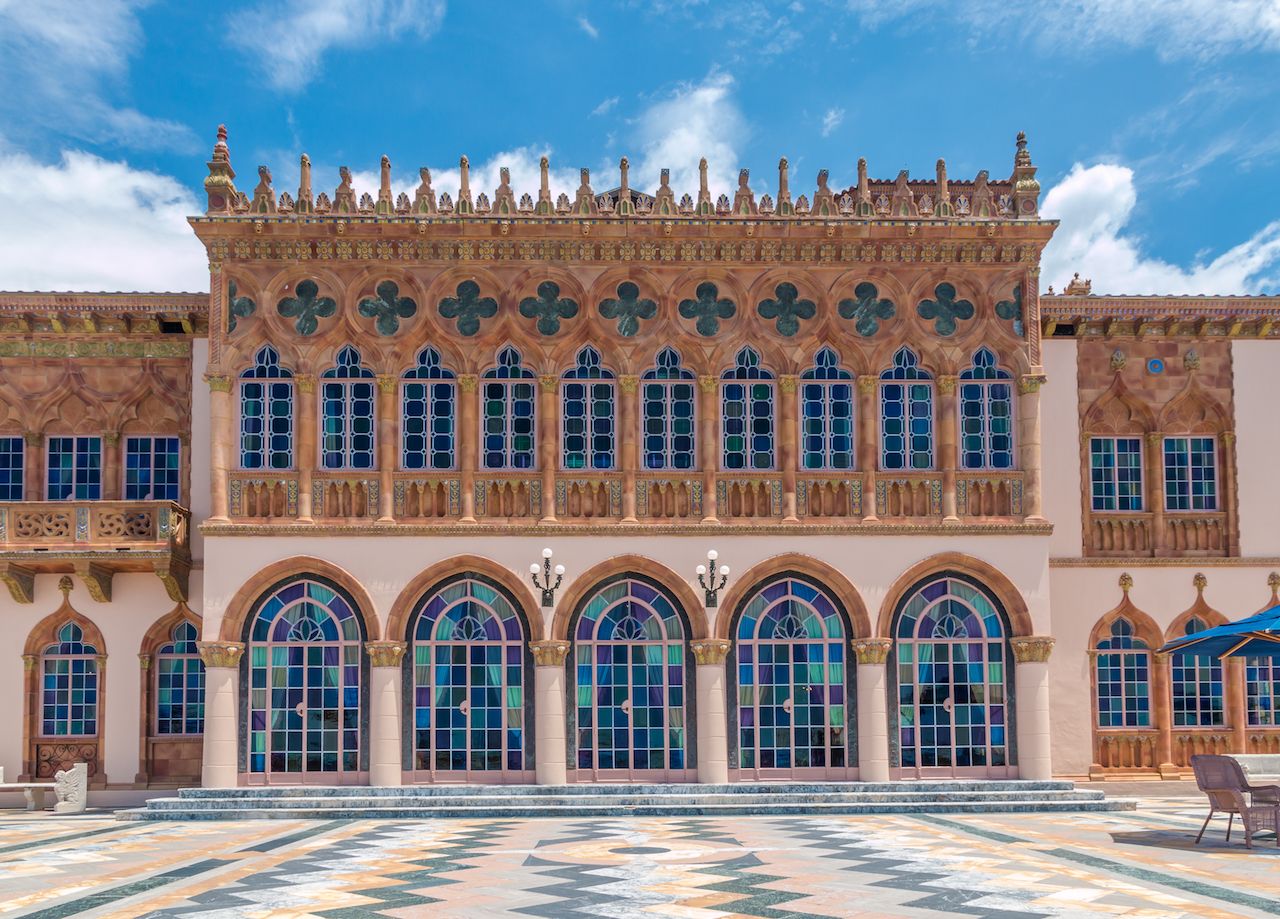 Circus king John Ringling called this lavish estate home for a brief period from 1926 to1936, which spans 36,000 square feet on a three-million-square-foot bayfront lot, built at a cost of $1.5 million. The Venetian Gothic design was inspired by the Ringlings’ travels through Italy, a tribute to the palazzos and canals of Venice, with the still waters of Sarasota Bay their stand-in for the Venetian waterways.

The four-floor palace is filled with Italian Renaissance art and marble, with a sprawling back patio covered in Italian tile. Its grandest feature is the 82-foot tower complete with an observation deck where Ringling allegedly brought guests to marvel at all the land he held in Sarasota. Ringling left the house to the people of Florida, but anyone who watches the news can guess how well a gothic mansion would do in the hands of Florida Man. It was so run down by the late ‘90s it was used as the set for Miss Havisham’s house in the 1996 version of Great Expectations. Fortunately, that low point spurred a $15 million renovation that led to its reopening in 2002. 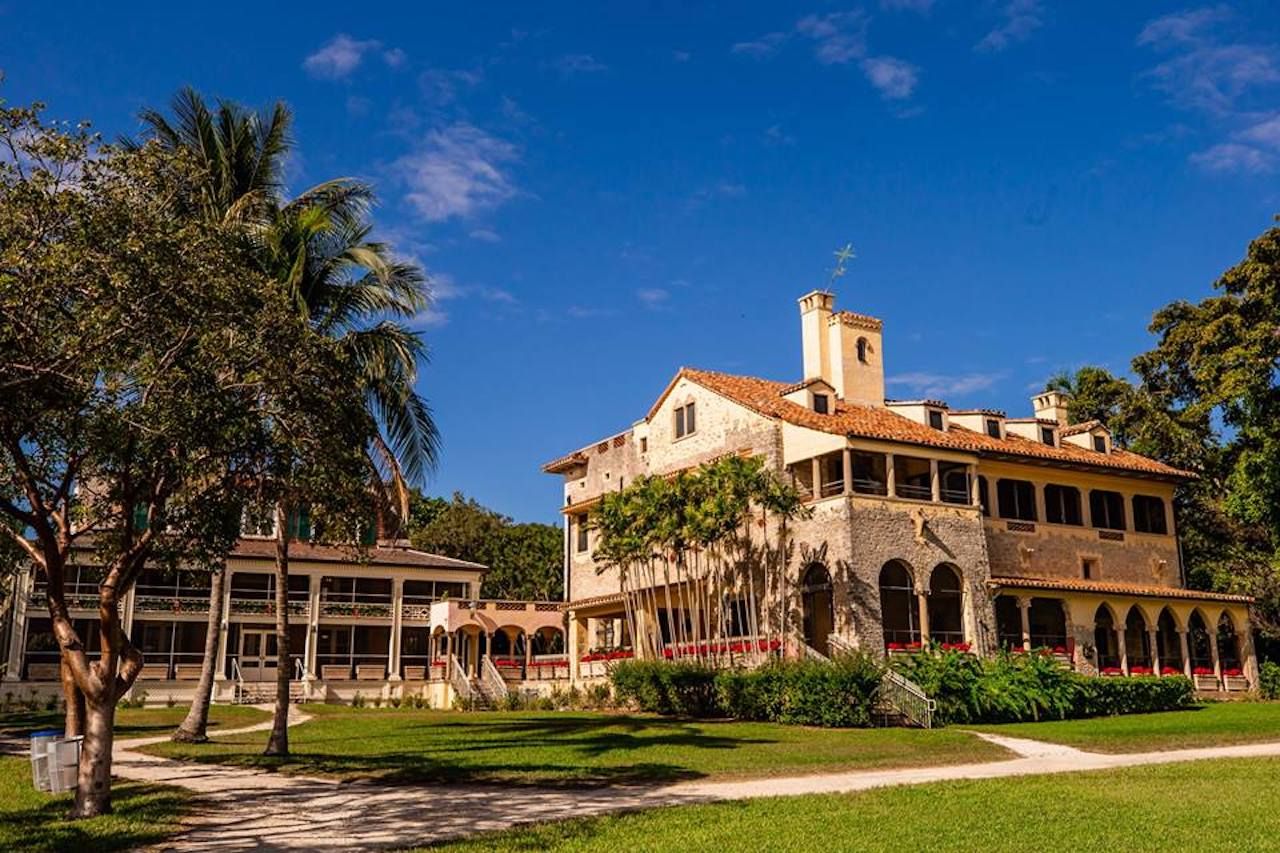 Not satisfied with just one home in Dade County, John Deering purchased the old Richmond Inn on a rock ridge where the Everglades met Biscayne Bay about halfway between Miami and the Florida Keys. The inn was effectively a business hotel for those coming to do business with Flagler’s new railroad. But it closed in 1915, and Deering quickly purchased it along with hundreds of surrounding acres for his final home. In addition to renovating the old inn, Deering built a three-story Mediterranean Revival stone house as his main residence, made fireproof to protect the art collections he was importing from his homes in Spain.

In addition to the impressive stone house, which included a Prohibition-era wine cellar to hide his international liquor collection, the estate has a pump house, a carriage house, and a powerhouse, which made the estate completely self-sufficient. The estate’s shoreline also includes a man-made boat turnaround, effectively creating an aquatic driveway to the home. Today you can not only tour the Deering Estate but also tour some of the last pine rocklands in Florida, as well as take guided kayak tours out on the water.