At some point in 1776, Thomas Jefferson probably turned to John Hancock and said, “You know, John, someday people will spend entire days drinking light beer, packing themselves into public parks, then trying to figure out how to use the bathroom once the fireworks start to celebrate this declaration!” This is pretty close to what happens when you attend one of the big, famous Independence Day fireworks shows in this great nation of ours.

Although seeing fireworks over the National Mall in DC or the Gateway Arch in St. Louis is great, those outings are also often a logistical nightmare. Luckily, there are other celebrations in America that are just as grand, some even bigger, and far less crowded. From an anvil launching in New York to the biggest fireworks display you’ll ever find in a city of 14,200, here are 15 fantastic Fourth of July celebrations you’ve probably never thought to attend, but should. 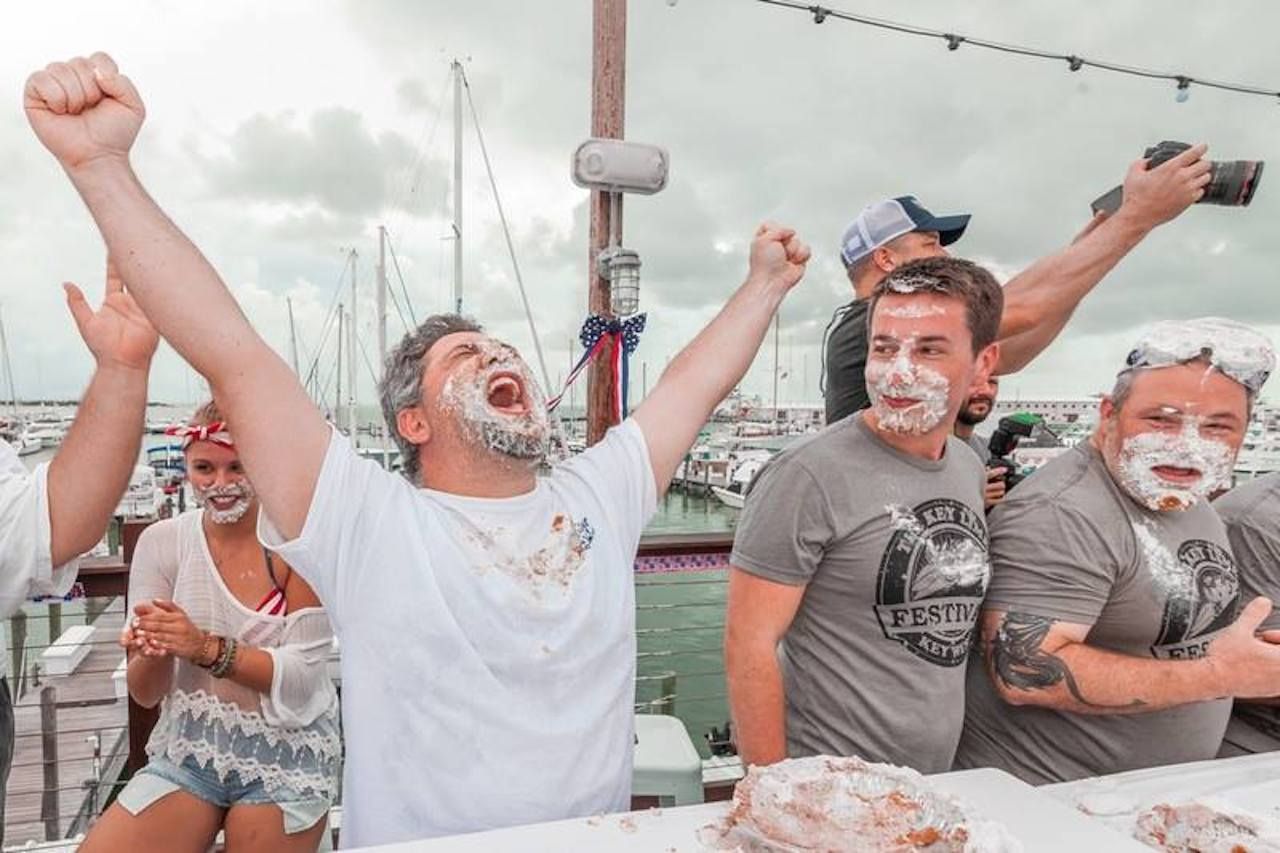 For lovers of seafood, tart desserts, and clothing-optional bars, there’s no better place to spend the Fourth of July than Key West. Here, you can kick off the day with the annual Key Lime Pie festival, downing Key lime cocktails, watching or participating in Key lime pie-eating contests, and trying frozen Key lime pie on a stick. If you’re staying on the beach at the Casa Marina hotel, there will be a big seafood grill out on 1,100 feet of beach, culminating in the big fireworks display on the water. Or, you can see it all from the clothing-optional rooftop bar on Duval Street, Garden of Eden. 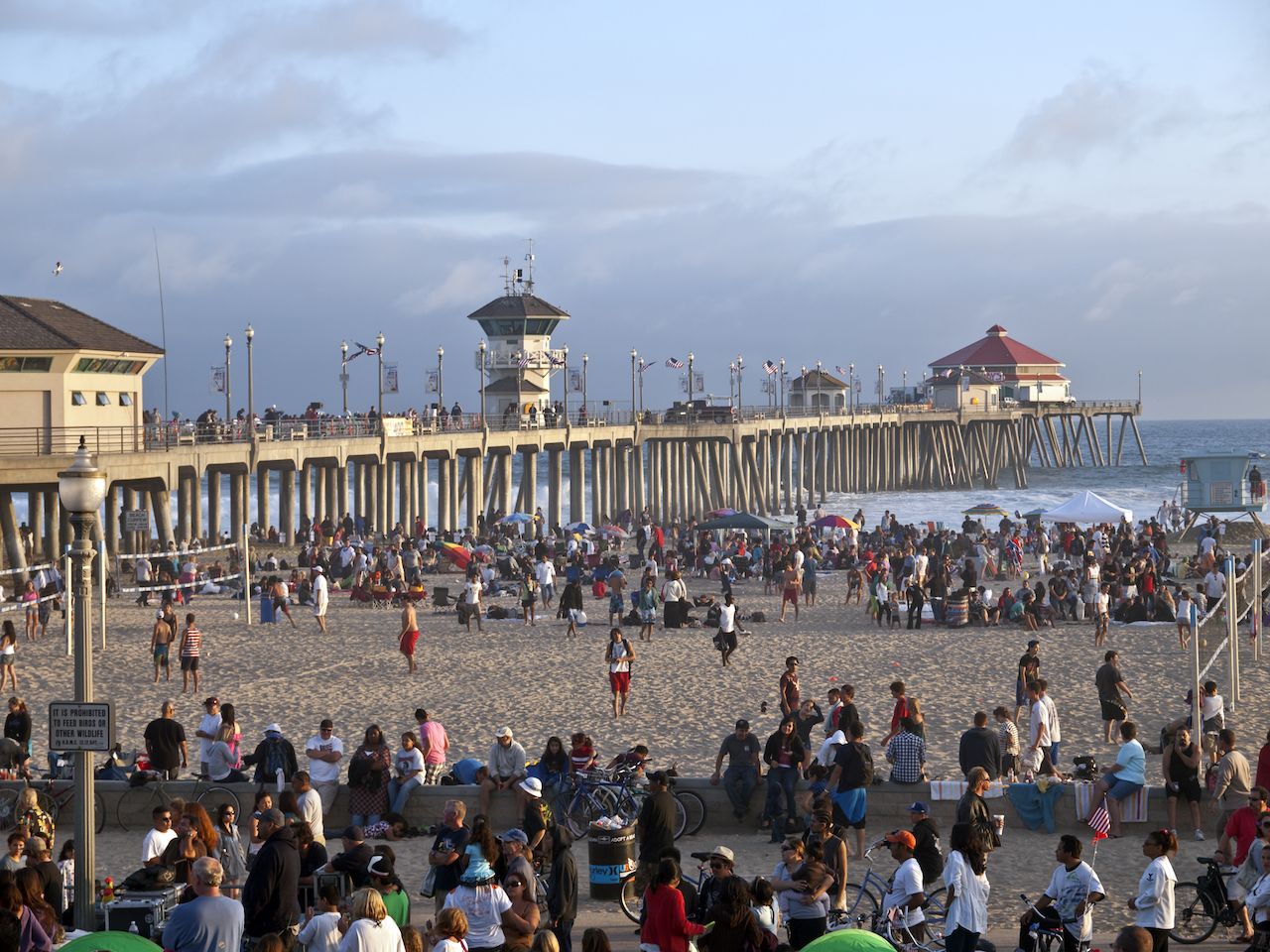 The largest Fourth of July parade west of the Mississippi is in Huntington Beach, the Southern California beach town best known as Surf City, USA. The festivities kick off at 7:00 AM with a 5K then continue with a 10:00 AM parade full of bands, floats, equestrian groups, and celebrity grand marshals. The beach party continues all day, ending with a 9:00 PM fireworks display and live entertainment on the HB pier. 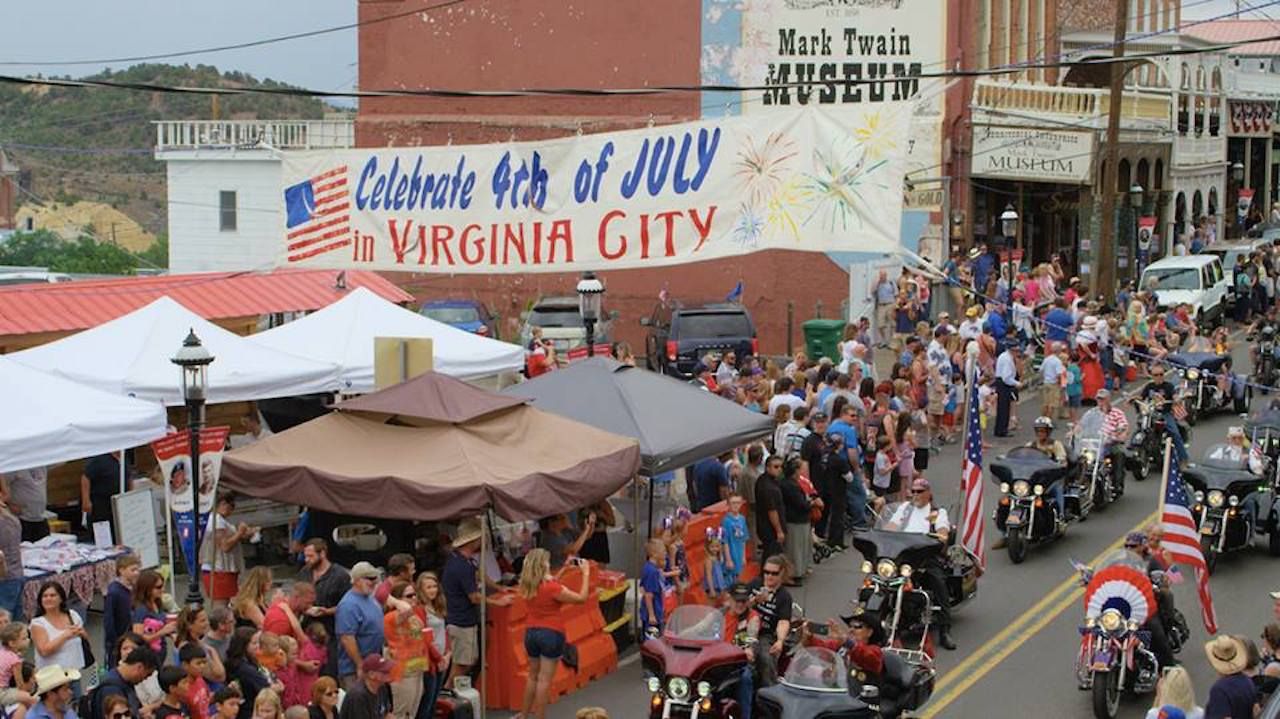 Overhead fireworks are cool and all, but how much cooler would they be if they exploded right at eye level, with massive echoing booms and zero chance of permanent injury? That’s what you’ll get in this little old mining town southeast of Reno, where fireworks are set off in a canyon below street level, meaning that by the time they get to peak elevation they’re right smack in front of you. It’s the biggest display in northern Nevada and caps off a fun-filled day of wild-west gun shows, a parade, and historic mine and museum tours. Just consider leaving anyone averse to loud noises at home. 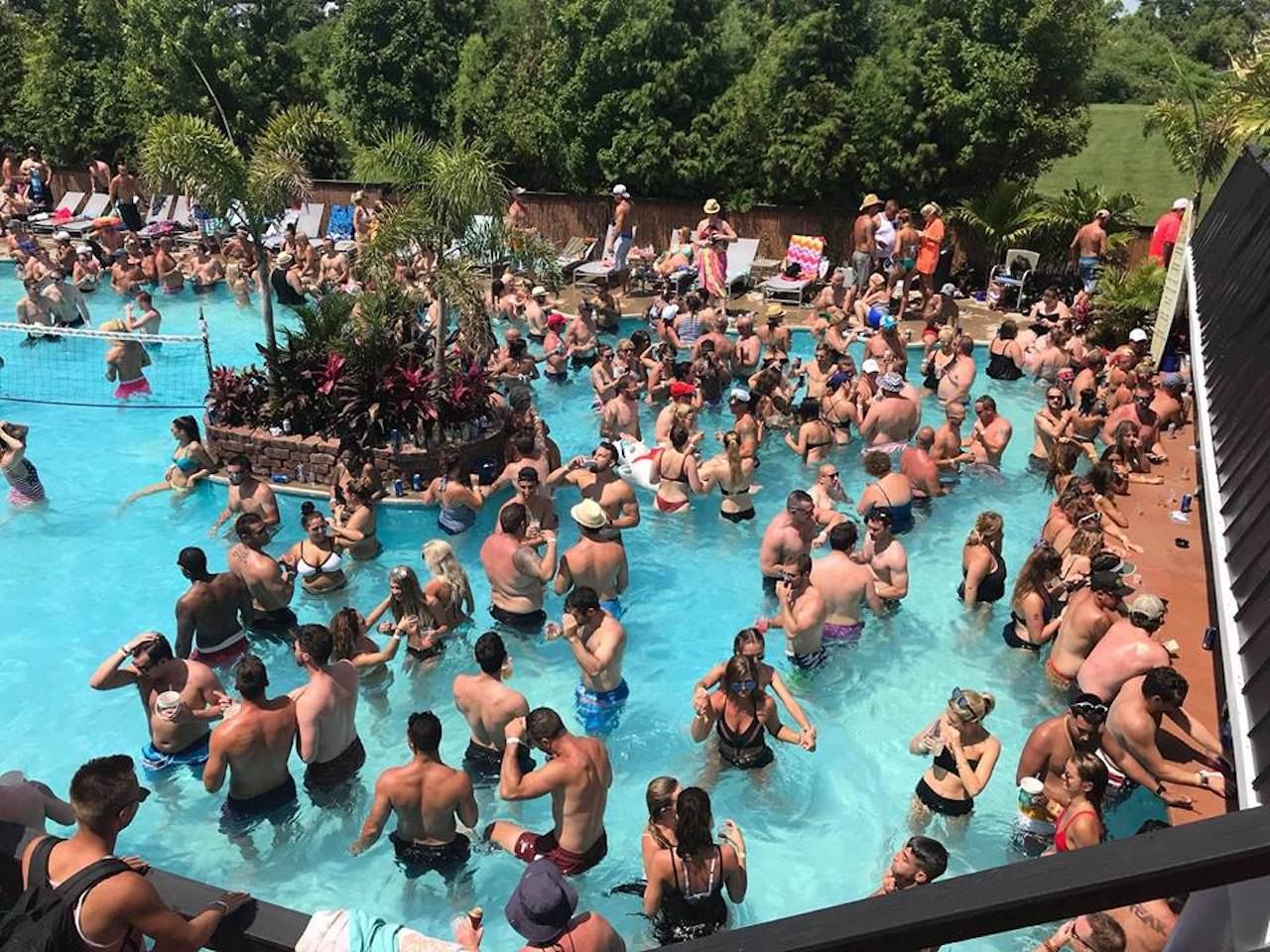 If you’ve ever wondered what it would be like to combine Spring Break and the Fourth of July, get yourself to Put-in-Bay, friend. “The Key West of the North” lives up to its name on Independence Day, where this little island in Lake Erie is awash in pool parties, jam-packed bars, and half-naked people. The bars and restaurants are filled with folks from northern Ohio making the most of their short summers, and on the Fourth of July, the island that played a key role in the War of 1812 fires muskets and carronades near the landmark Commodore Perry Memorial all day long. 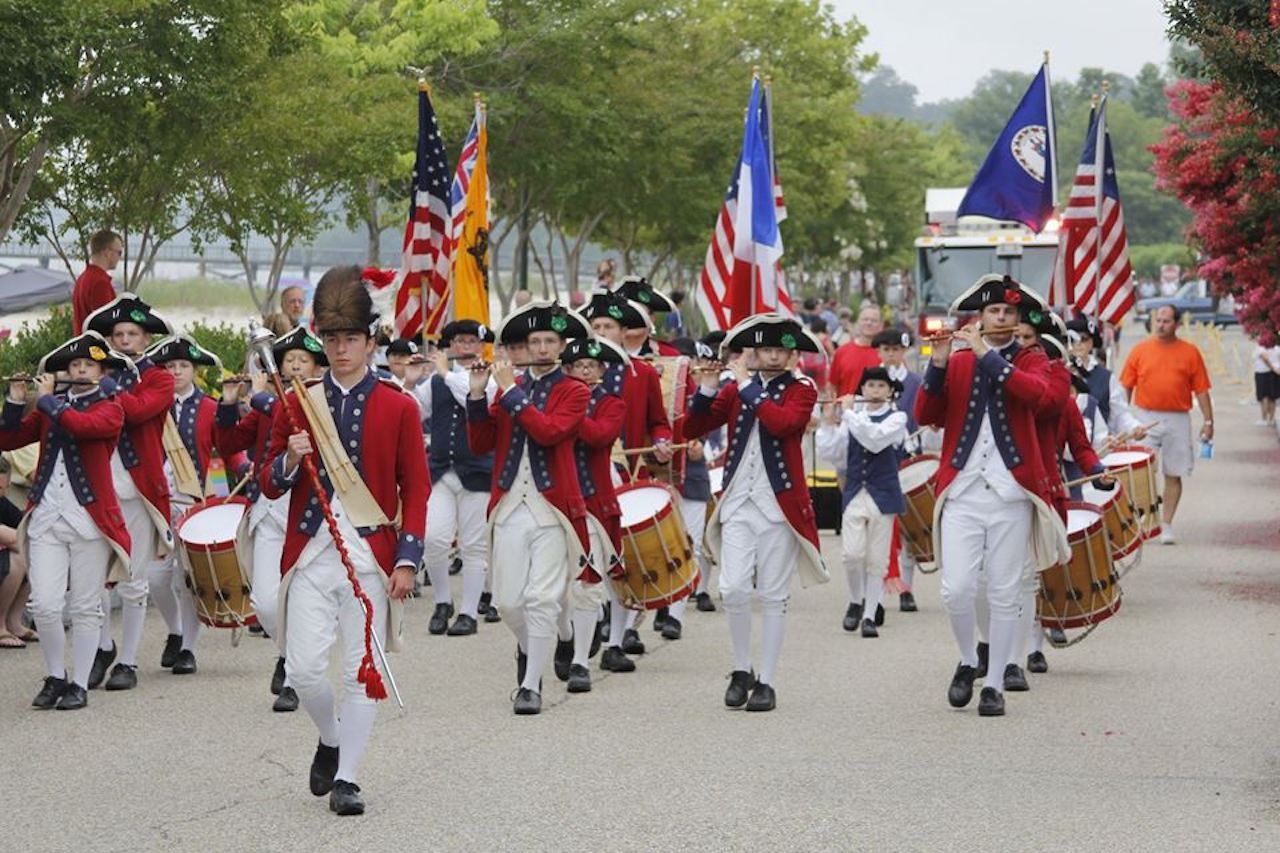 If you’re looking for an educational Fourth of July, suit yourself, but your best bet is Yorktown’s Liberty Celebration. It’s a full day of reenactments and demonstrations that’ll excite history buffs like Black Friday excites bargain hunters, when 11:00 AM and artillery demonstration gives way to 11:30 AM fifes and drums. You can also see what training for Washington’s Continental Army was like during special training sessions, plus pose questions to soldiers in a recreated encampment, then watch live demos of military drills. It’s as close to living the revolution as you can get on the Fourth of July without somehow contracting smallpox. 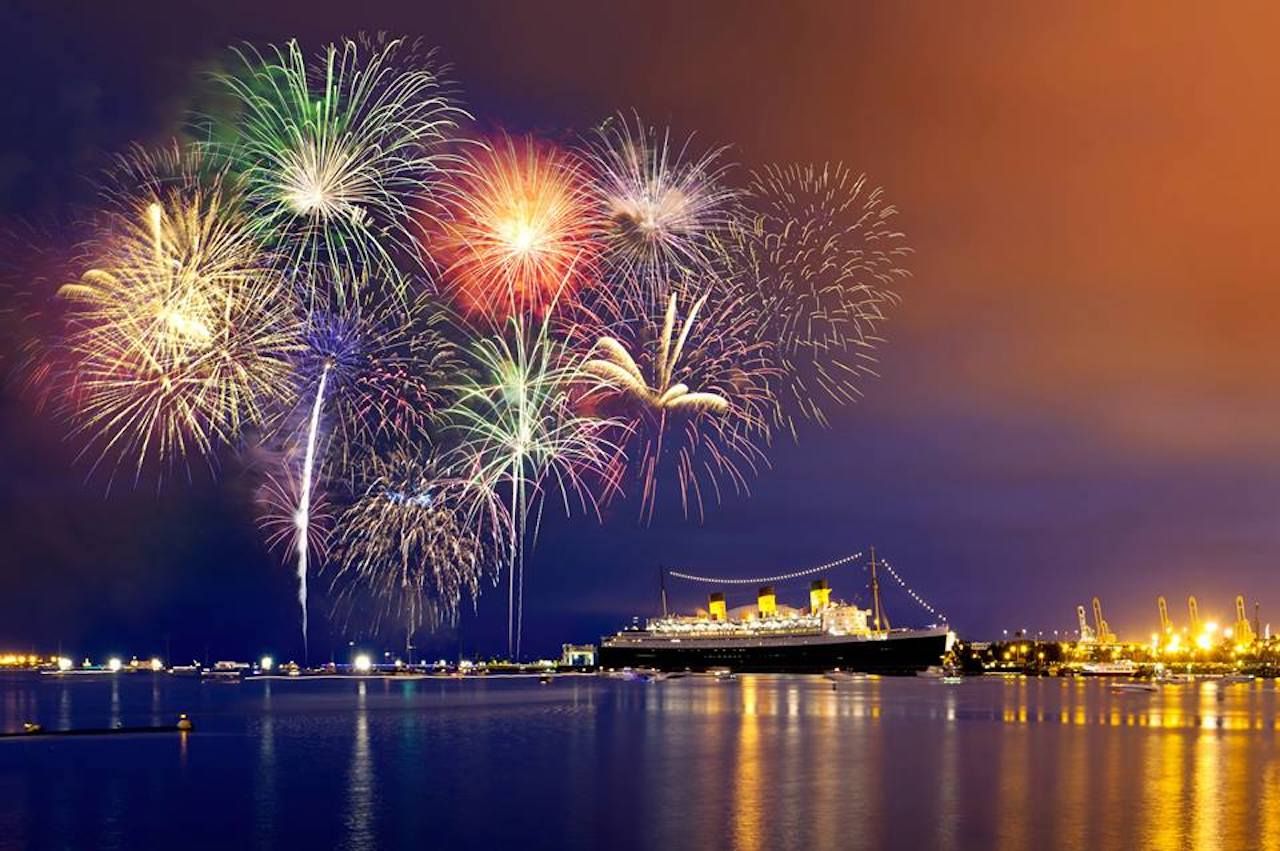 At one time this was the world’s most famous ocean liner. Now, it’s maybe the third most famous thing in Long Beach behind Sublime and Snoop Dogg, but it still throws a better Fourth of July party than either of them. On board this ocean liner docked at the port of Long Beach, you’ll find patriotic theatrical performances, games, drinks, and a private fireworks display over the Pacific Ocean. It’s not every day you get to spend the Fourth of July watching fireworks from the decks of a famous cruise ship, which is why this event typically sells out every year. 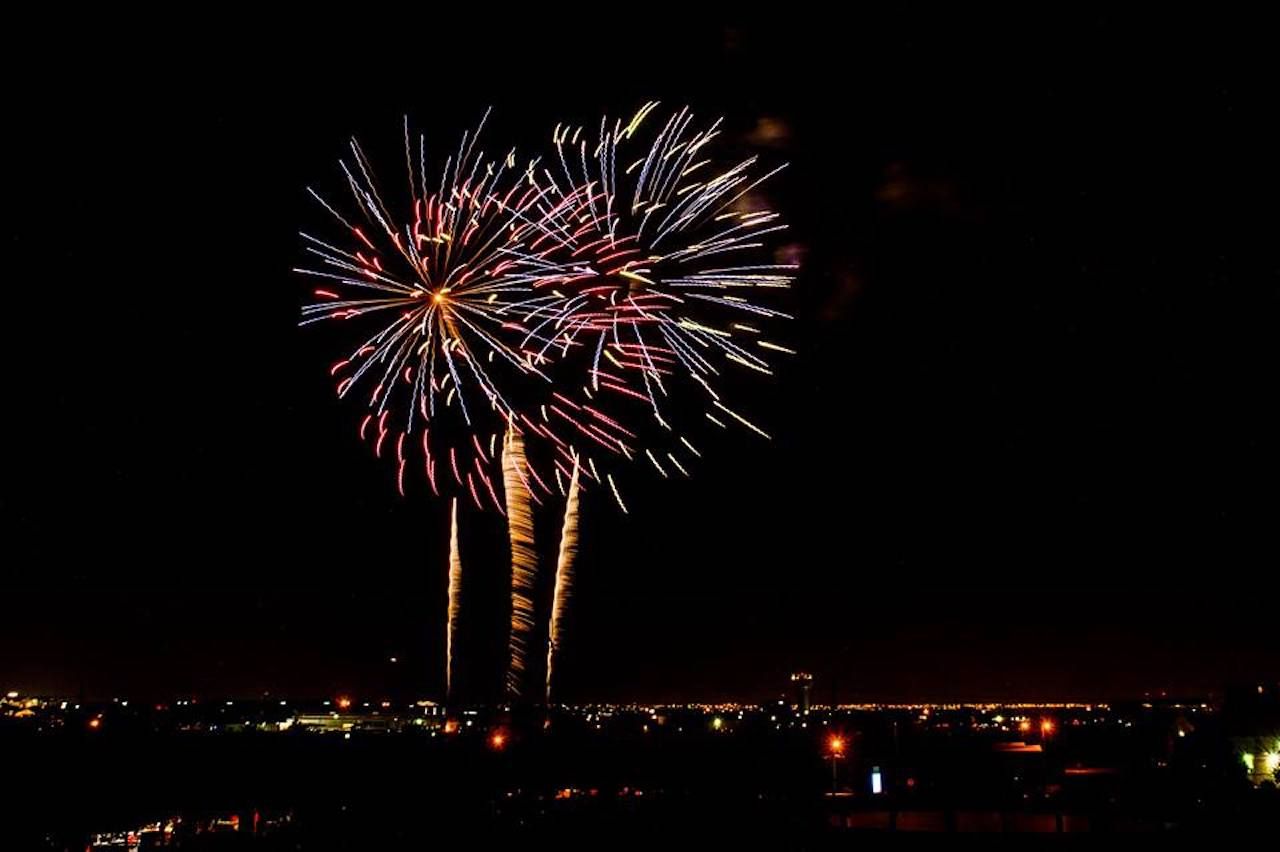 Texans are a lot of things. Subtle is not one of them. That’s why one of the state’s best Fourth of July parties is simply called Kaboom Town, during which the Dallas suburb of Addison puts on a more impressive show than any other city in the Metroplex. The day features a full-on airshow with skydivers, aerobatic pilots, and military aircraft. It then transitions into a nighttime concert culminating with a 9:30 PM fireworks show, one of the biggest in Texas. This means that by regular standards, it’s probably 10 times the size of what you’re used to. 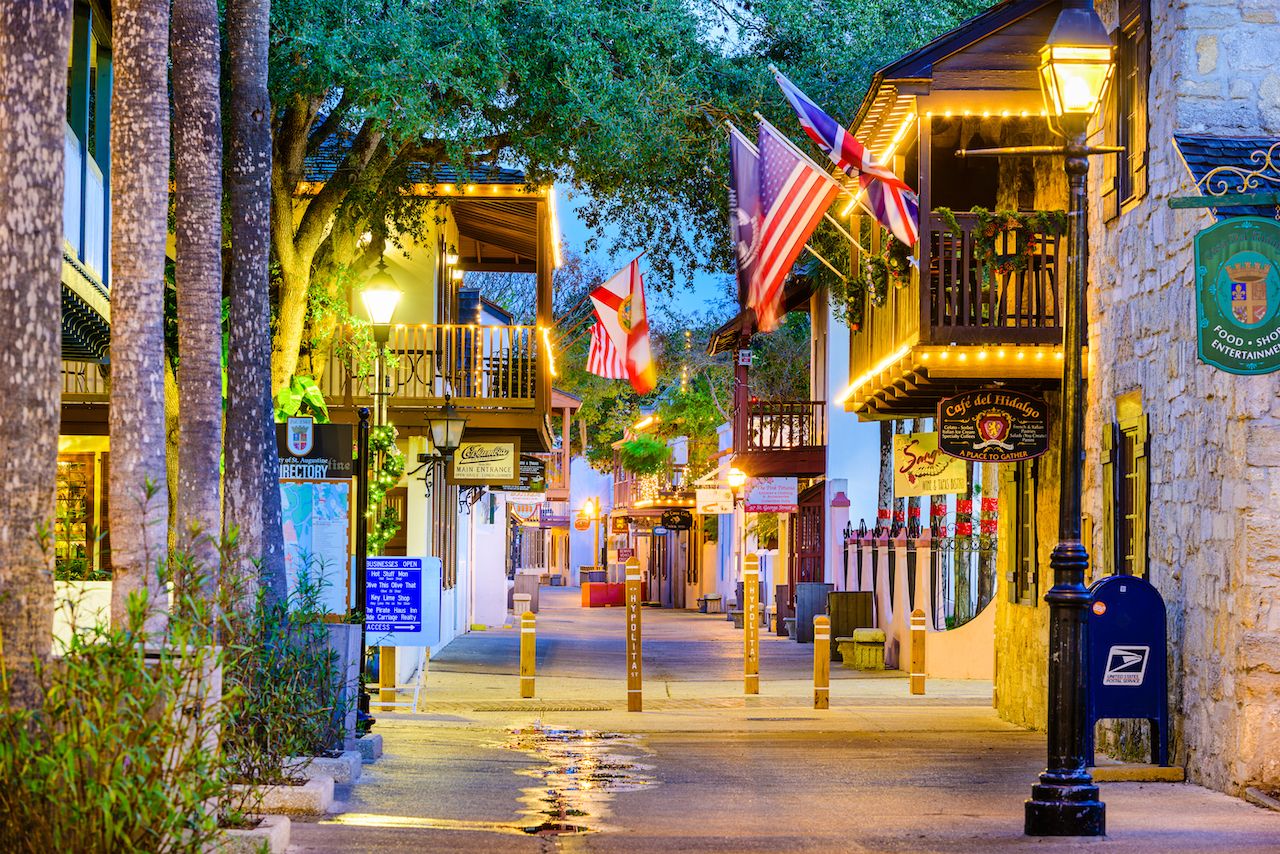 You’ve probably watched enough Jeopardy! to know that St. Augustine is the oldest city in the United States. But did you also know that it’s also home to one of the largest fireworks displays on the East Coast? The 20-minute program explodes over the historic Castillo de San Marcos on Matanzas Bay, leading to an all-night party in the many haunted bars in the old city. The show is put on by the same folks who coordinate displays just down the road at Disney World and SeaWorld, and it’s set to patriotic music blared over loudspeakers along the waterfront. 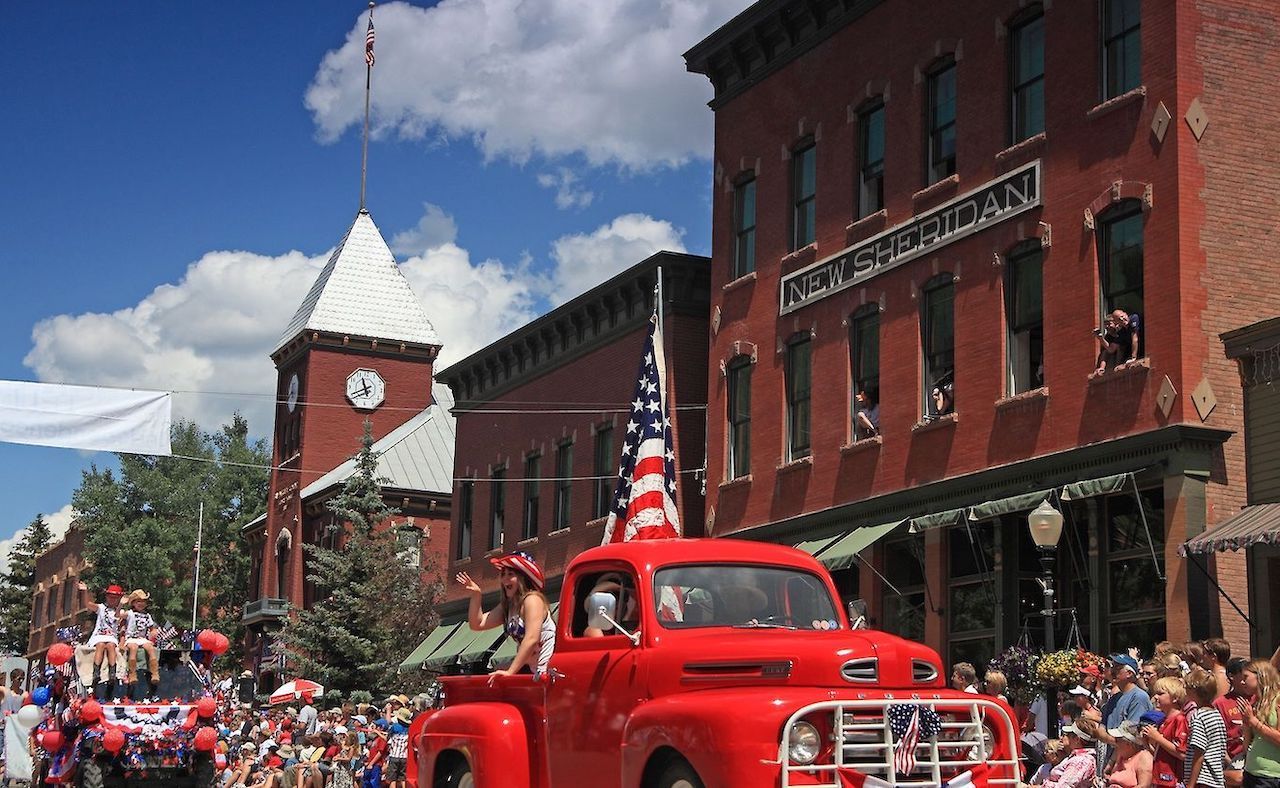 Watching fireworks against majestic Colorado peaks is beautiful just about anywhere in the Rocky Mountain State. Of course, even reruns of Fat Albert can be beautiful in Colorado if you stop by the right store first. But in Telluride, you won’t need any herbal help to enjoy the beauty, especially when the local historic museum has free admission and root-beer floats all day long. They’ll taste extra refreshing when you catch an air show with F-16 flyovers and the biggest fireworks show in southwest Colorado, all over one of the most picturesque small-town Main Streets in America. 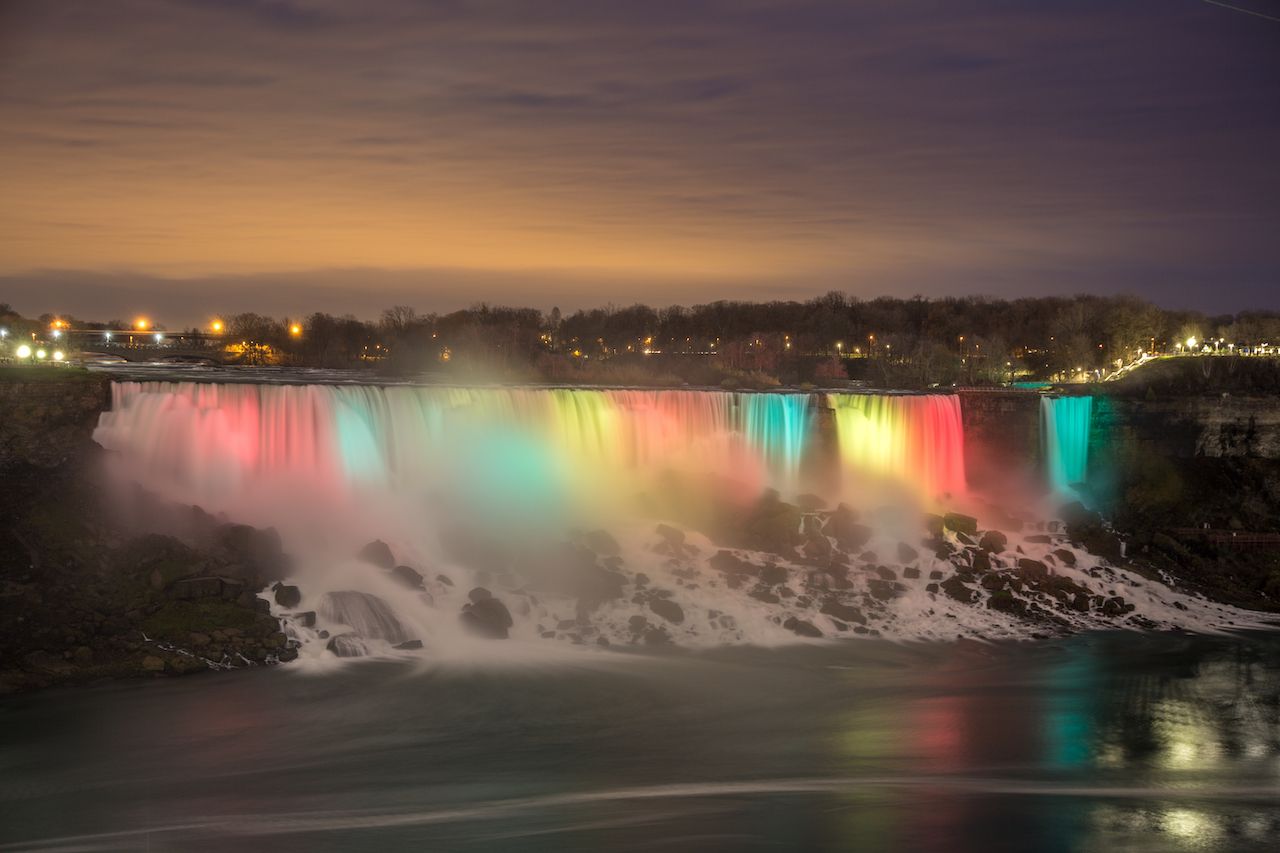 It’s a two-for-one party at the falls this year when America’s greatest water feature celebrates Pride at the Falls. The cascading whitewater will be lit up in rainbow colors (or colours, if you’re on the Canadian side), and there’ll also be a performance from the Buffalo Philharmonic. If you’re in desperate need of fierce Independence Day competition, head to Fantasy Island for its Declaration Celebration, which will feature contests for both belly-flopping and hot-dog eating. 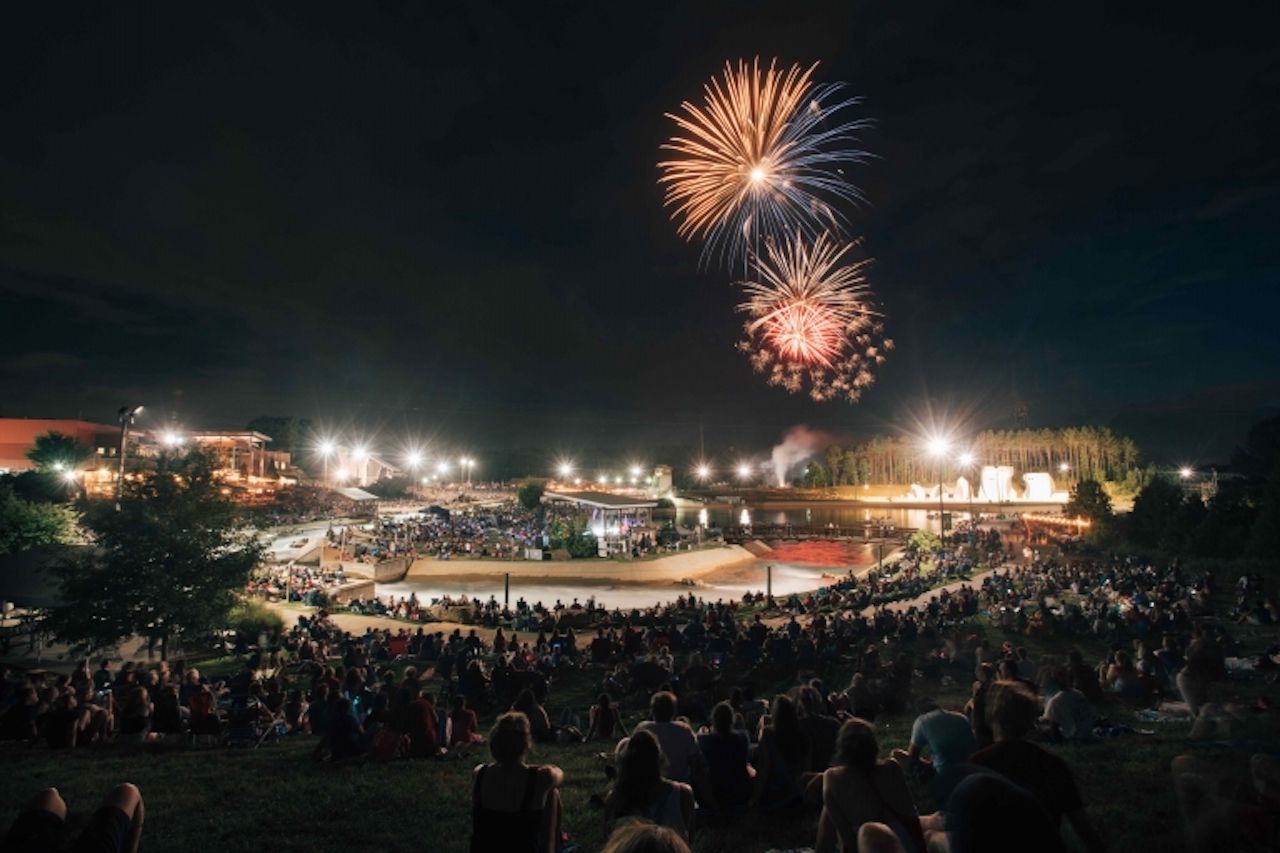 The National Whitewater Center doesn’t inherently sound like a go-to Independence Day destination, but the world’s largest man-made whitewater river keeps the party going for two full days, starting with SUP Yoga on July 3. No, you won’t be doing yoga on whitewater but rather on the lower pond of the river, so you’re not dodging rapids while trying to hold Warrior Two. On the Fourth, you can race your friends and others in the annual Battle Royal SUP Sprint, where contestants paddle through the pond in competitive heats. The celebration also includes live music, tours of the center, whitewater rafting, and two nights of fireworks. 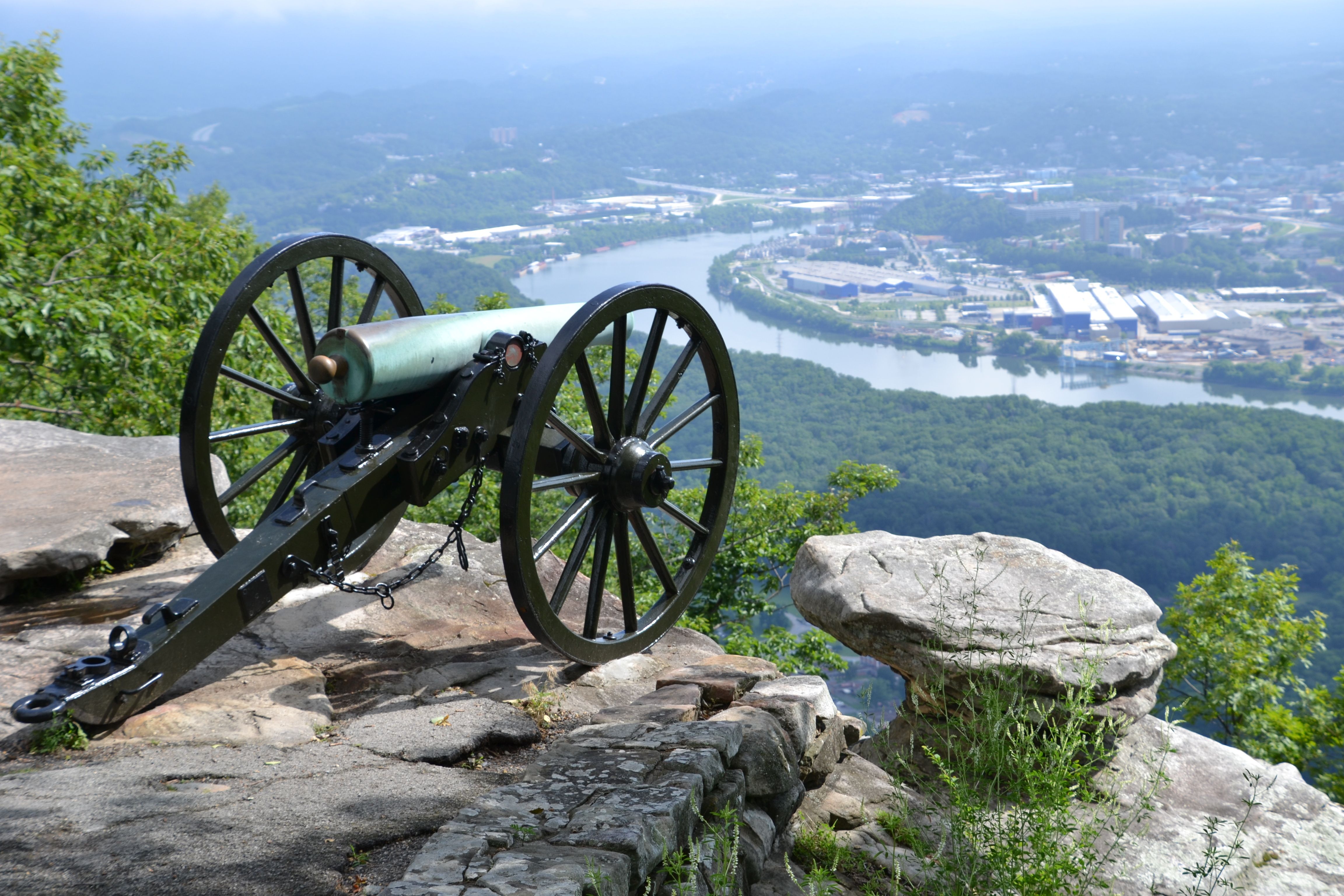 Though once upon a time watching explosions from the top of Lookout Mountain was a pretty terrifying prospect, on the Fourth of July it’s a fantastic vantage point to watch fireworks while reliving American history. In addition to the mountain, you can also hit the Chickamauga and Chattanooga Military Park for live artillery demonstrations. Or head down into town, where the Chattanooga Symphony and Orchestra performs a free concert on July 3, followed by a 9:45 PM fireworks celebration. For the second day of pyrotechnics, take in a Lookouts game at AT&T Park, and stay for fireworks after the game. 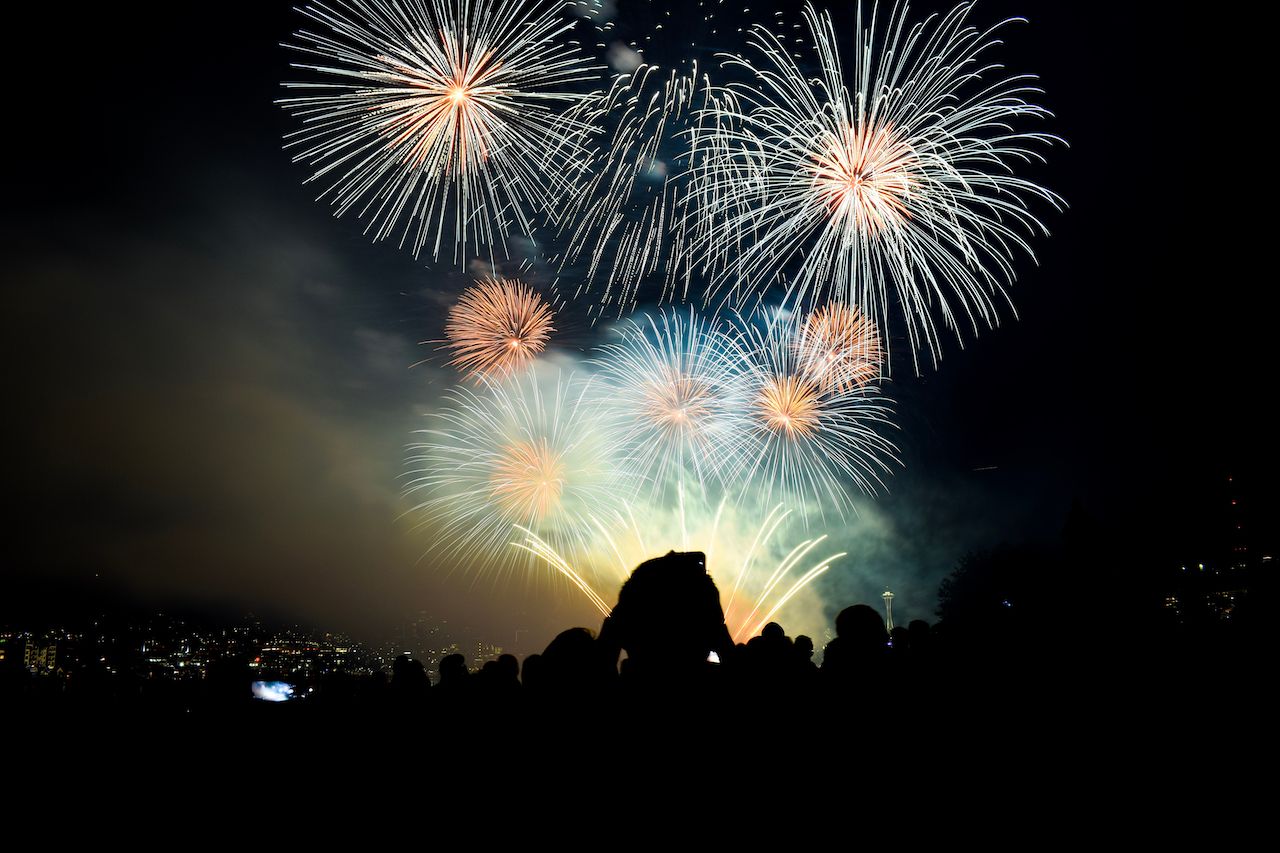 It shouldn’t surprise anyone that a city situated on hills between two bodies of water lends itself to spectacular Fourth of July fireworks. Any house or apartment with a good view of Lake Union is going to be a perfect place to party, but if you want to get into the heart of the action, head to Gas Works Park. Here you can watch 8,500 pounds of fireworks explode while perched on decommissioned gas pipes and machinery. The massive show is all set to the Seafair Summer Fourth score, a classical composition that’s the soundtrack to many a Seattle summer. The Fourth is also the odd time of year that’s consistently sunny in Seattle, making this an ideal weekend to visit. 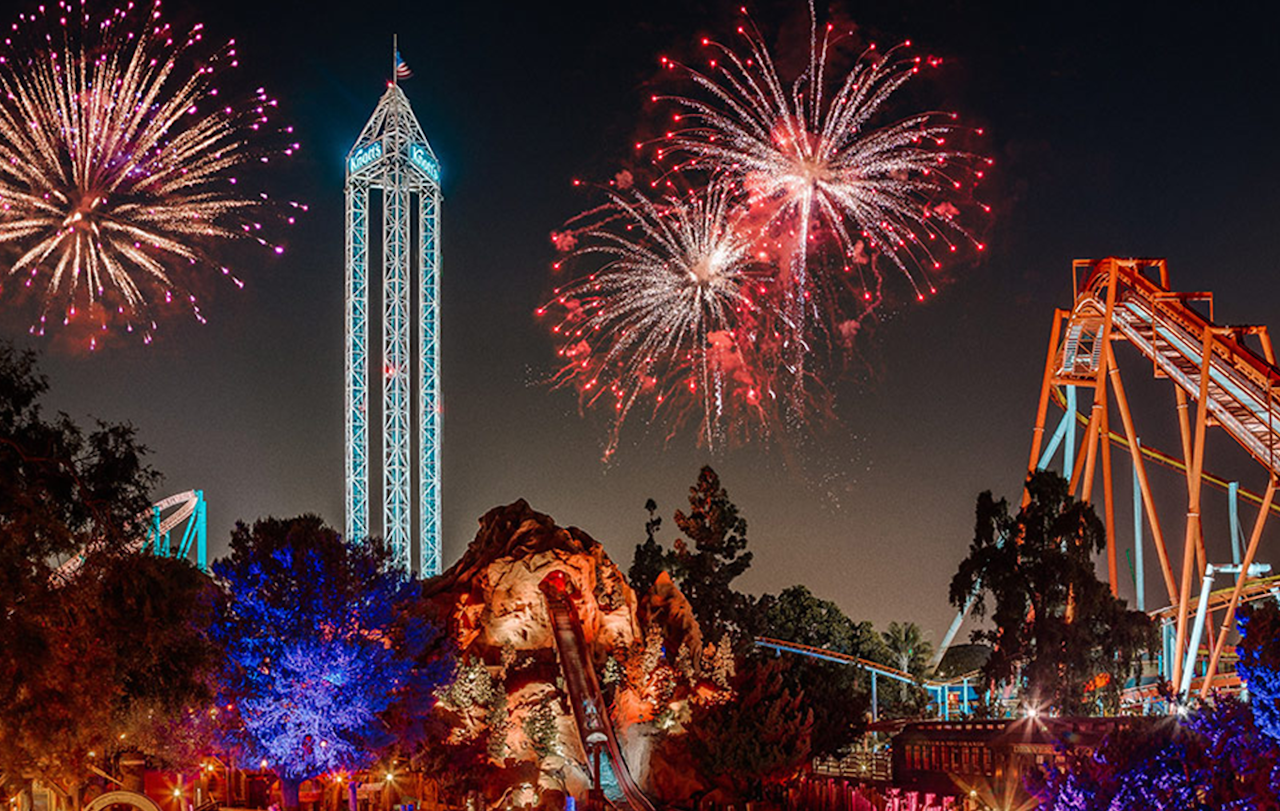 Fireworks at a theme park are a good idea in theory, until you realize the rest of Southern California had the same bright idea and you spend all of the Fourth of July trapped in crowds. Not the case at Knott’s Berry Farm, which traditionally has a not-larger-than-average weekend attendance, and you can cool off in the new Calico River Rapids whitewater ride if the day gets too hot. When the sun goes down, Knott’s Summer Nights start up, with live music, s’mores, and a fireworks display capping off the night. It makes for an action-packed day without having to plan much and might be the area’s best choice for families. 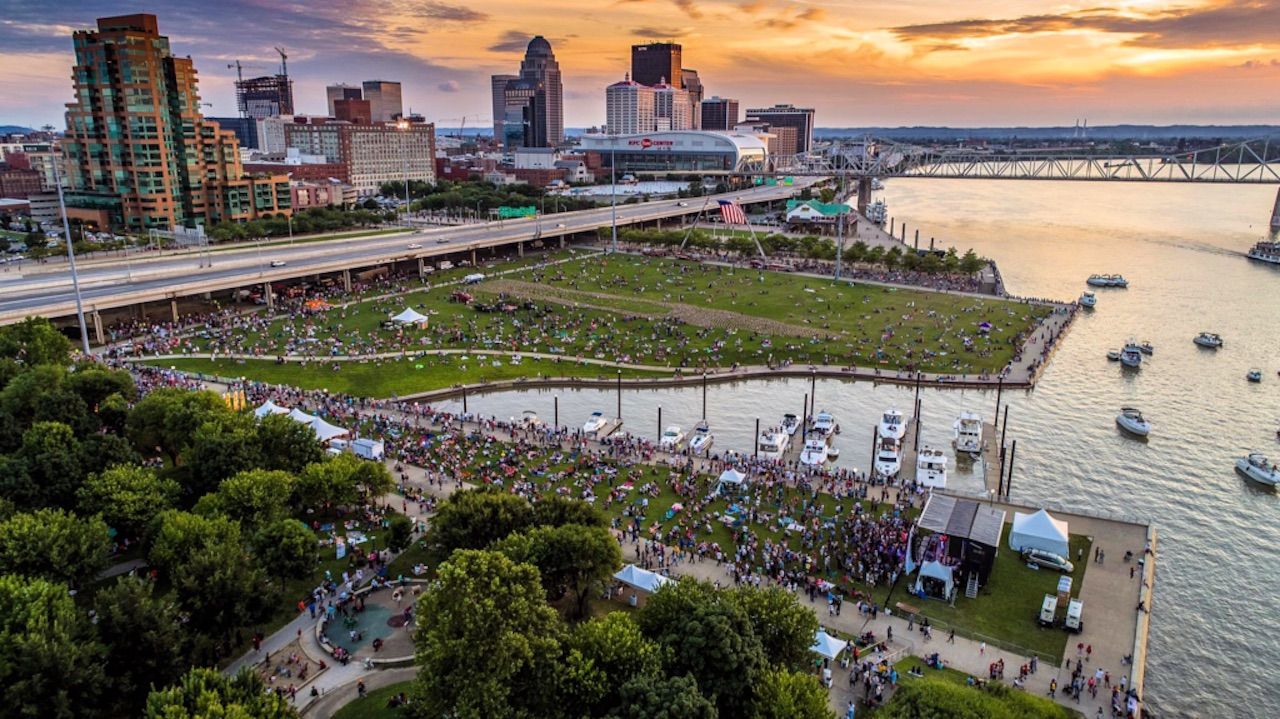 No city does the US flag better on the Fourth than Louisville, where no fewer than 15,000 replicas of Old Glory will line the Ohio River for the Louisville Waterfront Fourth. The annual celebration draws tens of thousands of Louisville to Harbor Lawn, where they sip bourbon in true Kentucky style while waiting for the massive Zambelli fireworks display. In the meantime, there are police, firefighters, and first responders on hand doing demos with their latest equipment. Plus a daylong live concert, this year featuring Spinsters Union of Louisville and the Zach Longoria Project.

Insider GuidesThese Are America’s Top 10 Spots for Fireworks This 4th of July
Tagged
Festivals Holidays
What did you think of this story?
Meh
Good
Awesome