Scattered throughout Seattle are many delightful parks, most of which offer incredible mountain or water views. Some are fronted by Puget Sound or by one of the area’s many lakes and waterways. Keep an eye out for where you can rent a paddleboard, kayak, or pedal boat to make your park visit even more enjoyable. You’ll find plenty of biking and walking paths as well. When the sun does come out in Seattle, you’ll have many options to choose from as to where to soak it up. 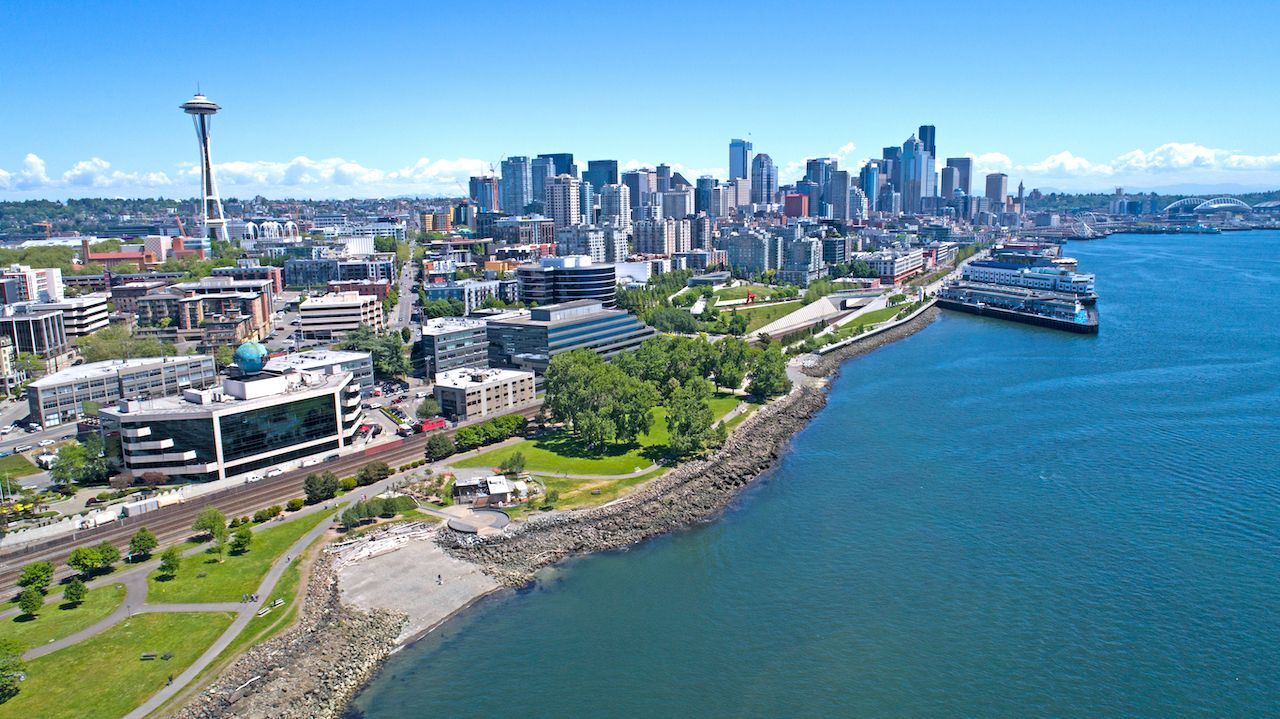 Myrtle Edwards Park — Just north of the waterfront, Myrtle Edwards Park is the perfect place to take in the view of the snow-covered Olympic Mountains on a clear day. Mount Rainier dominates the south end with a view behind the cranes of the Port of Seattle. Straddling the edge of Elliott Bay, the park has separate walking and biking paths for visitors to wind their way through the long and narrow park. On windy days, kite flying is also a good option. Most of the shore has large rocks up to the edge, but there is a sandy beach with driftwood just off of the walking path. Near the adjoining Centennial Park, a pedestrian bridge takes you over Elliott Avenue to the Lower Queen Anne neighborhood. Parking is very limited. If you’ve come by car, look for spots along the waterfront or park in the Lower Queen Anne neighborhood near West Thomas Street and Third Avenue West and take the pedestrian bridge over. 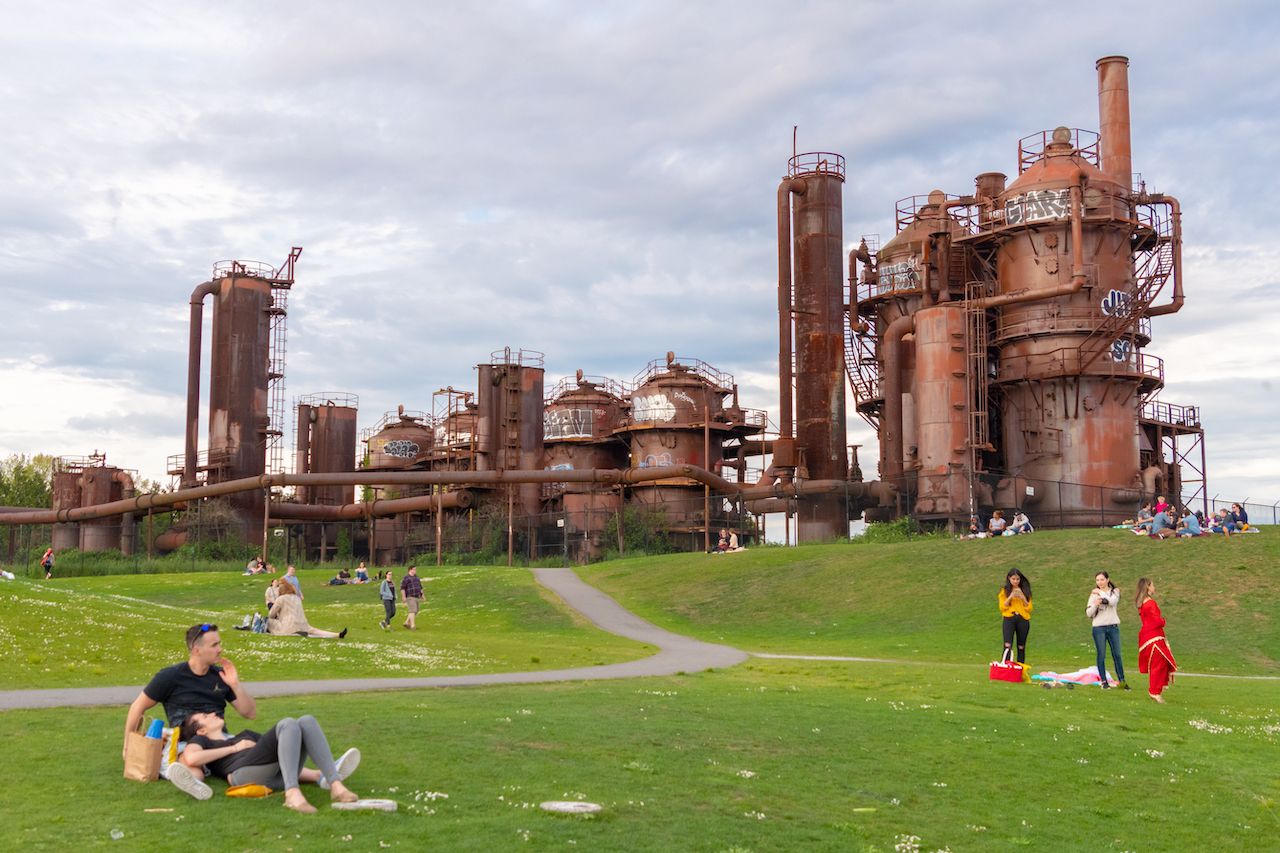 Gas Works Park — Jutting out from the Wallingford neighborhood, Gas Works Park offers an incredible view of the downtown skyline across the waters of Lake Union. Walking paths wind throughout the park. At the top of the central hill, there’s a great view of the city to the south and a dramatic view of the Aurora Bridge and Olympic Mountains to the west. You’ll see boats, kayaks, paddleboards, and rowing teams making their way across the water. Large, flat grassy areas provide great spots for playing frisbee or flying a kite. Stay until sunset and you’ll see the buildings in downtown light up in a warm glow as the lights slowly turn on. The ominous-looking fenced off structure in the middle of Gas Works Park is the old coal gasification plant, part of Seattle’s history. There’s free parking in a large lot next to the park just off Northlake Way. But be prepared for it to fill up on sunny weekends. 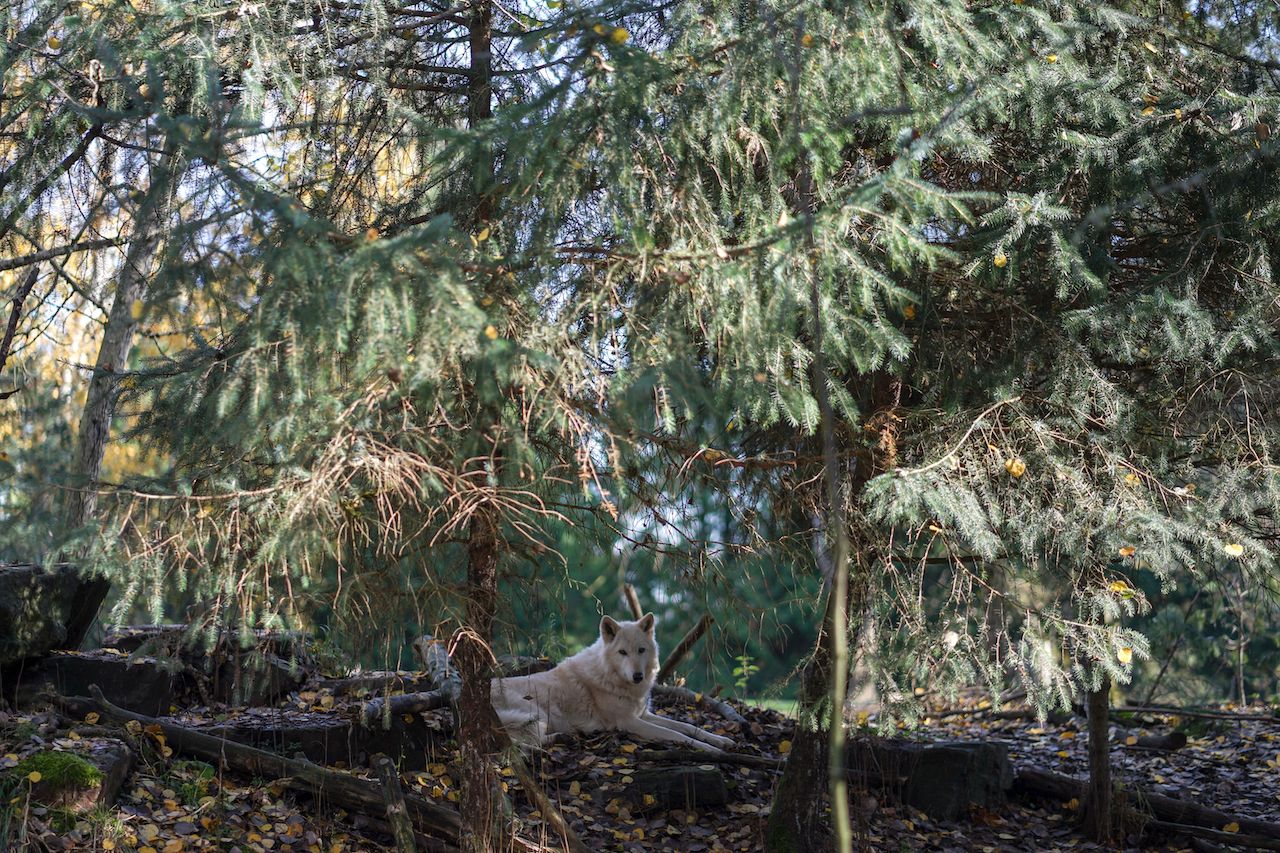 Green Lake Park — Green Lake Park is a quintessential Seattle experience on a sunny day. You’ll see Seattleites on rollerblades, bikes, skateboards, or just walking or jogging around the lake. If you’d like to get out on the water, rent a quad pedal boat, kayak, paddleboard, or sailboat at Greenlake Boathouse. You can also take a dip, for an entrance fee, at the indoor Evans Pool. Green Lake Park offers many other ways to stay active with baseball fields, a basketball court, playground, and tennis courts. You can find restaurants across the street from the park on the north and east side of the lake. Woodland Park and Woodland Park Zoo are to the southwest. There are parking lots at the north end of the lake, but they fill up at peak times. 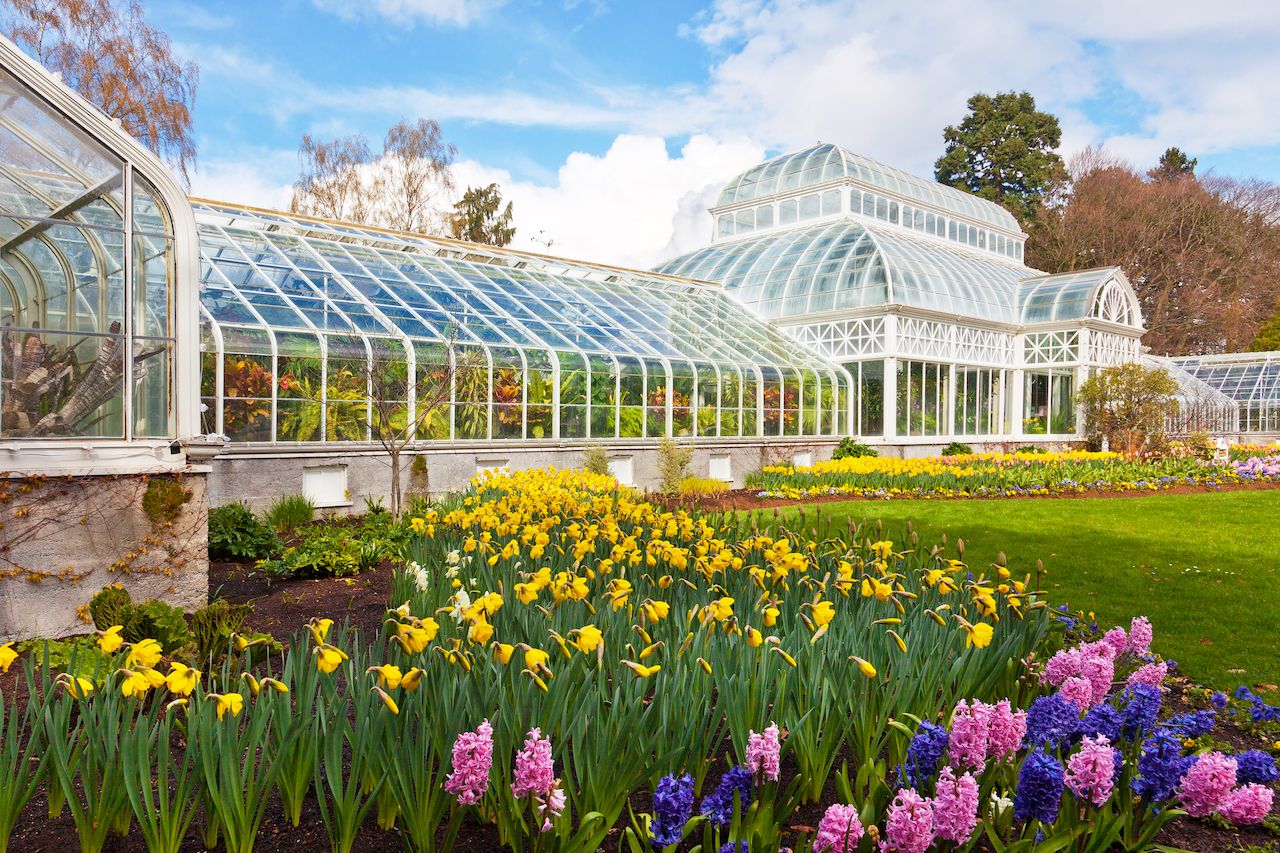 Volunteer Park — Set in a residential neighborhood in Capitol Hill, Volunteer Park is a welcoming space with sprawling green grass and mature cedar and pine trees. The Seattle Asian Art Museum is at the center of it, set in an Art Deco building dating back to 1933. The Water Tower Observation Deck offers views of the surrounding area, including the Space Needle off in the distance. Volunteer Park Conservatory displays a variety of plants in its glass house; it’s cheap for teens and adults, and free for kids. Restrooms for the park are to the right of the conservatory. You’ll find free parking down the center of the park and in front of the art museum. 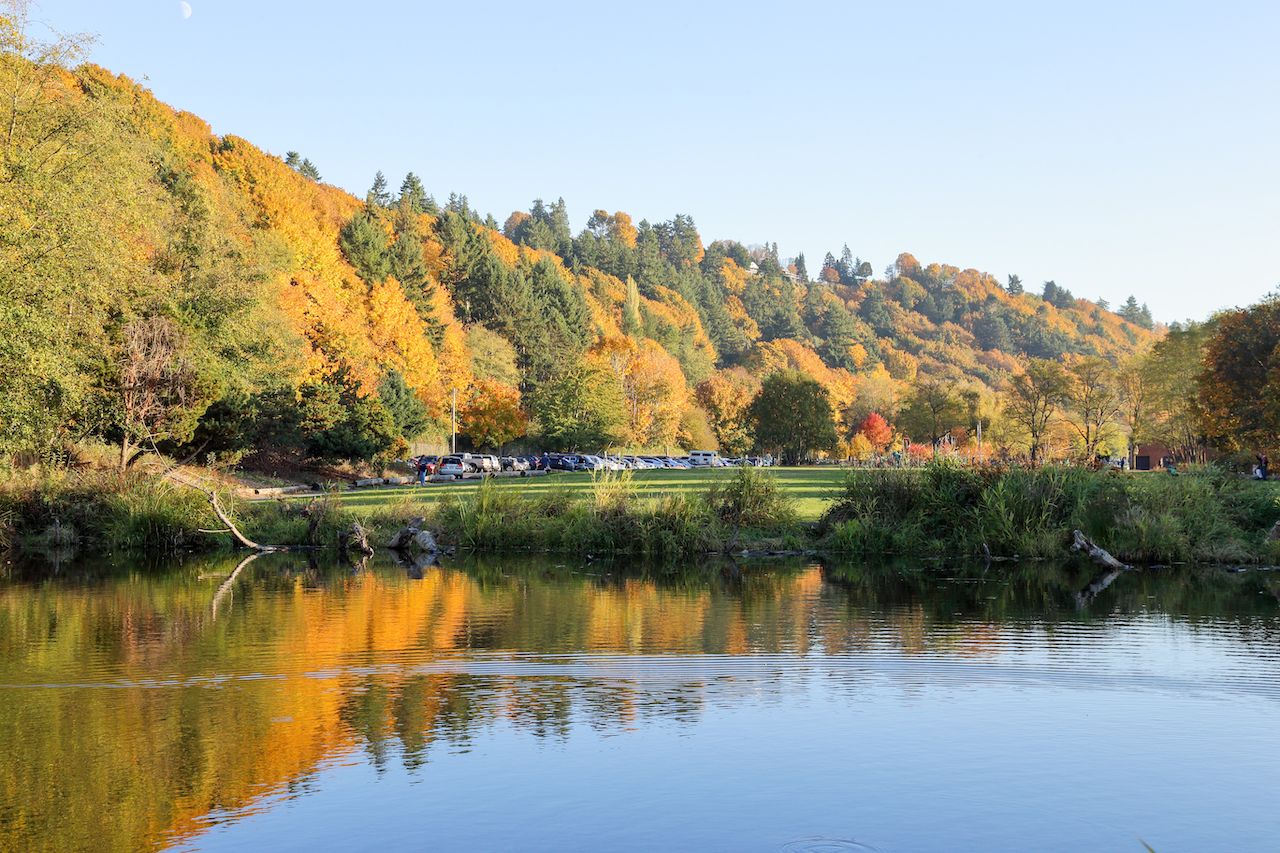 Golden Gardens Park — One of Golden Gardens Park’s best features is undoubtedly its view of the Olympic Mountains across Puget Sound. Sunny days are filled with playing in the sand, walking along the beach, and playing ball in the grassy field. If you’re up for a challenge, hike up to the upper part of the park across the train tracks and enjoy the shade of the trees along the trails. There’s also a fenced dog park at the top. If you want to get out on the water, you can take a tour or rent kayaks and paddleboards at Ballad Kayak just south of the park in Shilshole Bay Marina. In the evening you can enjoy a fire on the beach in one of the designated fire pits. Be sure to get there early; fire pits are unlocked at 4:00 PM. Golden Gardens is an extremely popular spot in the summer. There is a lot of parking, but it’s very crowded in the summer. There are actively used train tracks at the back of the lower park so only cross if no trains are in sight. 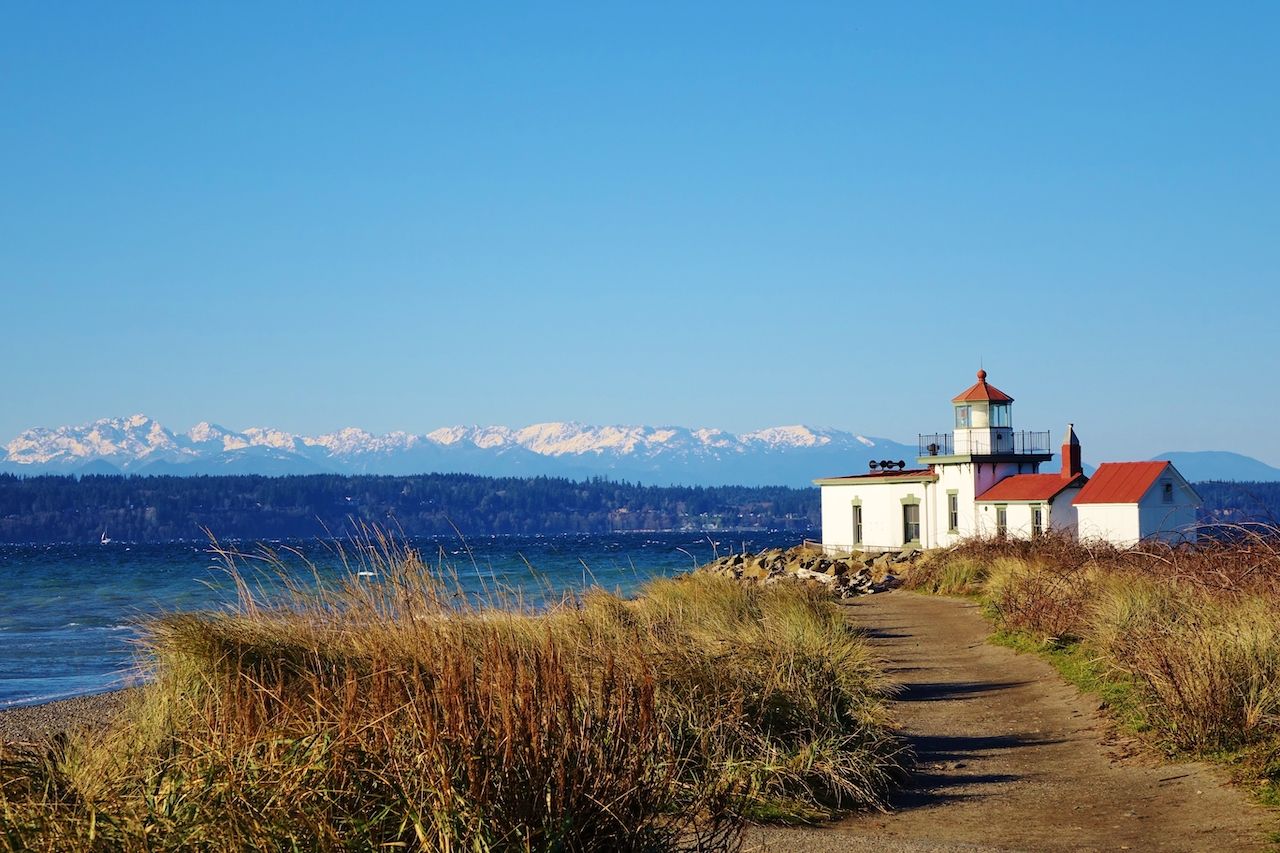 Discovery Park — Discovery Park is a massive green space in the Magnolia neighborhood, with more than 500 acres overlooking Puget Sound. Once a former military fort, today the park is crisscrossed with trails. If you’re up for a long walk, head to the shore to admire the West Point Lighthouse. Though the lighthouse isn’t open to the public, you can enjoy the peaceful views of Puget Sound. To learn more about the Native American history of the Seattle area, visit Daybreak Star Indian Cultural Center. You can view its art collection and learn about the history in the area. There’s no admission fee, but donations are accepted. It’s open on weekdays and by appointment on weekends. The south and east parking lots will fill up at peak times, but the north lot further down Discovery Park Boulevard will take you to a much larger parking lot near Daybreak Star. 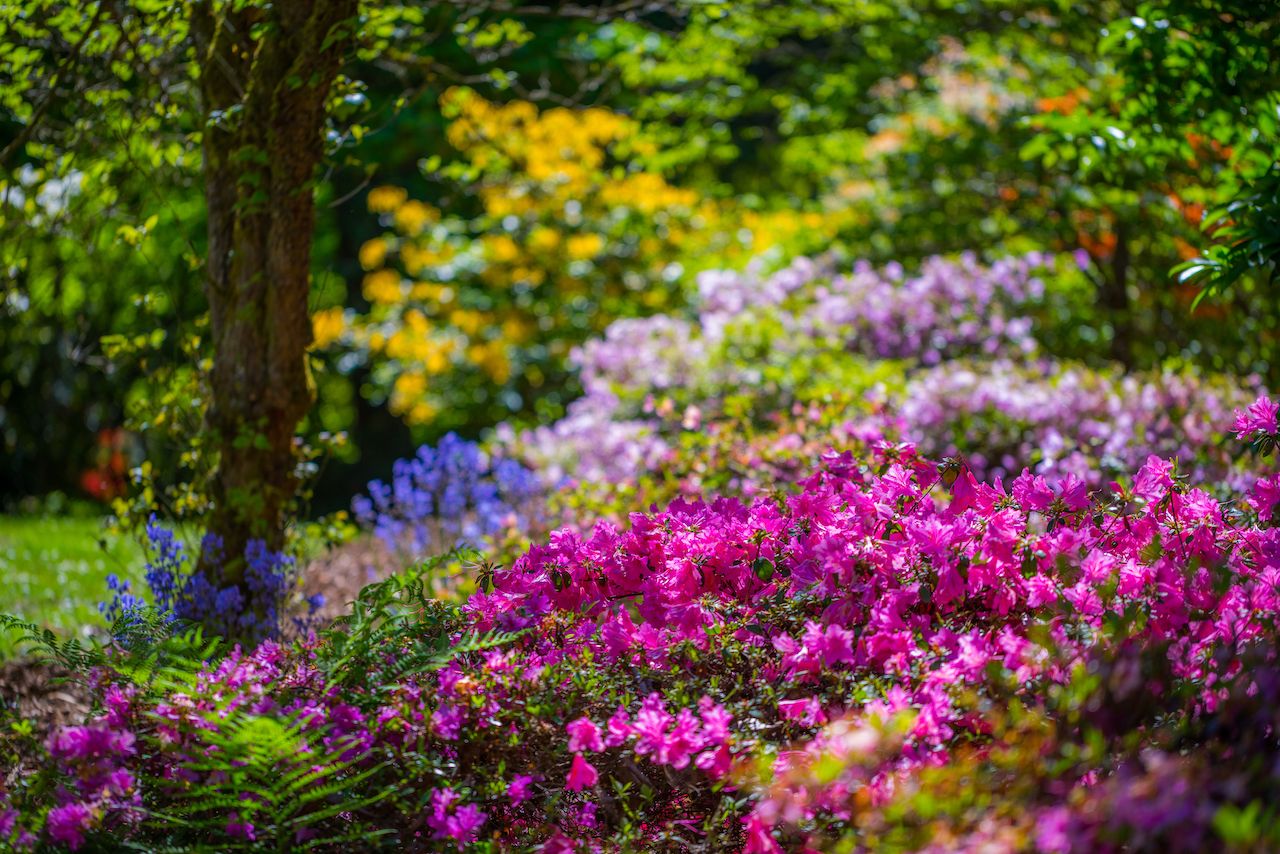 Washington Park Arboretum — This 230-acre park near Lake Washington is managed by the University of Washington Botanic Gardens and the city of Seattle. The arboretum is filled with a variety of plants and trees, and you can wander the trails yourself or join a free tour to learn more. Parking near the Graham Visitors Center is limited, and public transportation is encouraged. At the south end of the park you’ll find the 3.5-acre Japanese Garden, which has a small admission fee. In its Shoseian Tea House, you can experience a traditional Japanese tea ceremony for an additional fee. Free daily tours are offered from April through October.