Best known as the birthplace of Christopher Columbus and pesto, Genoa is a city mostly overlooked by visitors to Italy. Yet, it has a lot going for it; its location between the Mediterranean Sea and the Apennine Mountains make it a wonderfully scenic spot, and its historical center is impressively intact.

Most notably, the city’s elaborate collection of over 150 palaces is a sight to see. Forty-two of these palaces became UNESCO World Heritage sites in 2006, and although most are privately owned, several of the glorious edifices are open to the public year-round. The following seven palaces are all within a mile of each other, so take a walking tour through the winding, dark, and slightly treacherous narrow streets that make up the old town to explore the maze that is Genoa and find its most beautiful palaces. 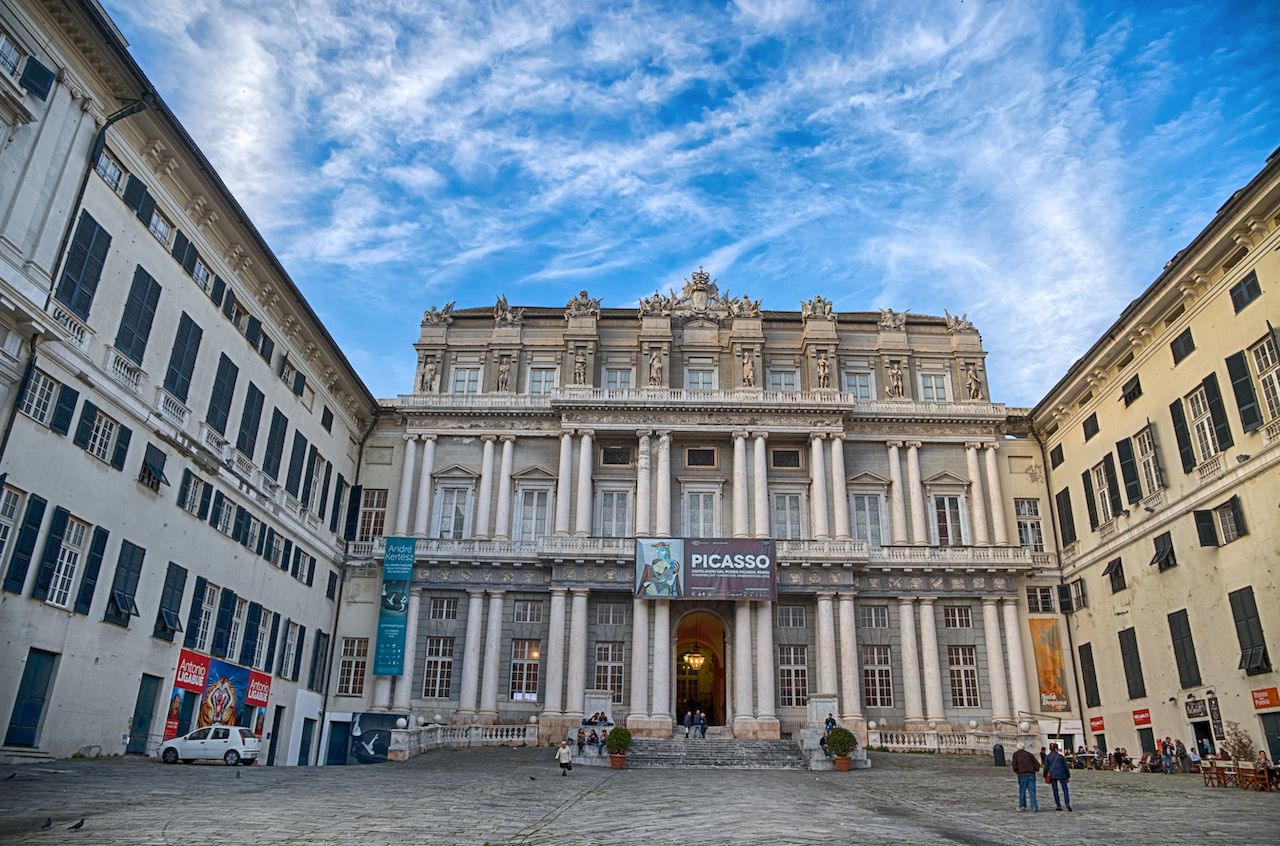 The best place to start your tour of Genoa’s palaces is Palazzo Ducale, or Doge’s Palace. Located in Genoa’s most iconic square, with Piazza de Ferrari on one side and Piazza Matteotti on the other, the palace’s open-air ground floor is used as a public space with a cafe. The upper floors of the massive structure are largely dedicated to temporary art exhibits, concerts, and other cultural events. For approximately $5.50, you can tour some of the main salons, as well as a tower once used as a prison. Constructed in the 13th century, the ancient palace has been through a great deal, including a fire in 1777 and Europe’s largest restoration project ever in 1992. While Palazzo Ducale may not be the most extravagant palace on this list, its sheer size and position as a cultural hub make it worth checking out. 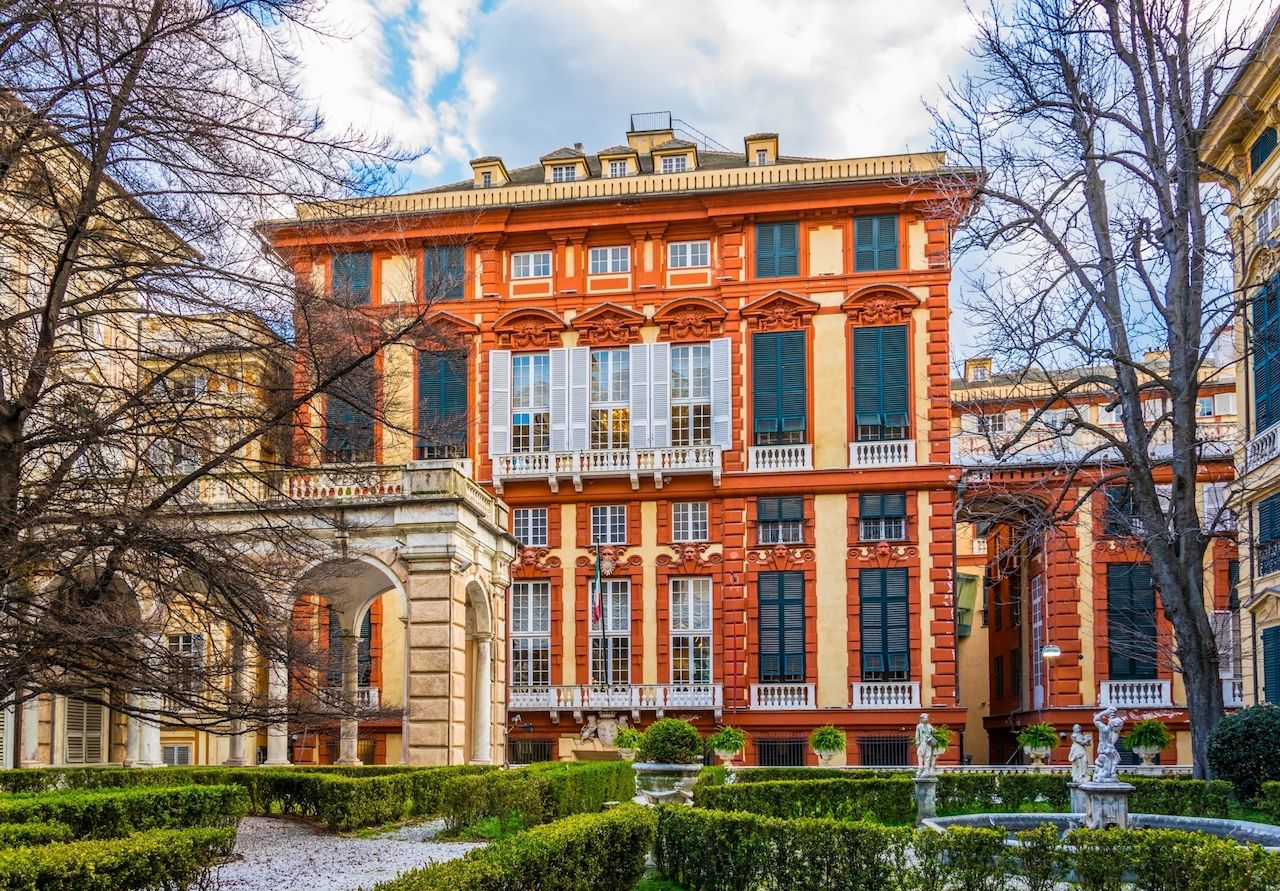 Just as you’re starting to feel a bit claustrophobic navigating through Genoa’s caruggi, the narrow alleyways open up to Via Garibaldi — an expansive street lined with opulent palaces. Also known as Le Strade Nuove (new streets), the design of this 16th-century upper-class neighborhood is attributed to architect Galeazzo Alessi.

The Strada Nuova Museums ticket costs approximately $9.90 and grants you access to three of the most immaculately preserved palaces in the city — Palazzo Rosso, Palazzo Bianco, and Palazzo Doria-Tursi. Palazzo Rosso, or Red Palace. is named after its red exterior. Inside, the walls are lined with beautiful paintings and the rooms are full of original furnishings. One of the most impressive rooms is a bedchamber adorned with gold finishings and beautifully frescoed walls. The palace layout is defined by loggias, essentially two separate wings connected by covered exterior corridors and an inner courtyard. 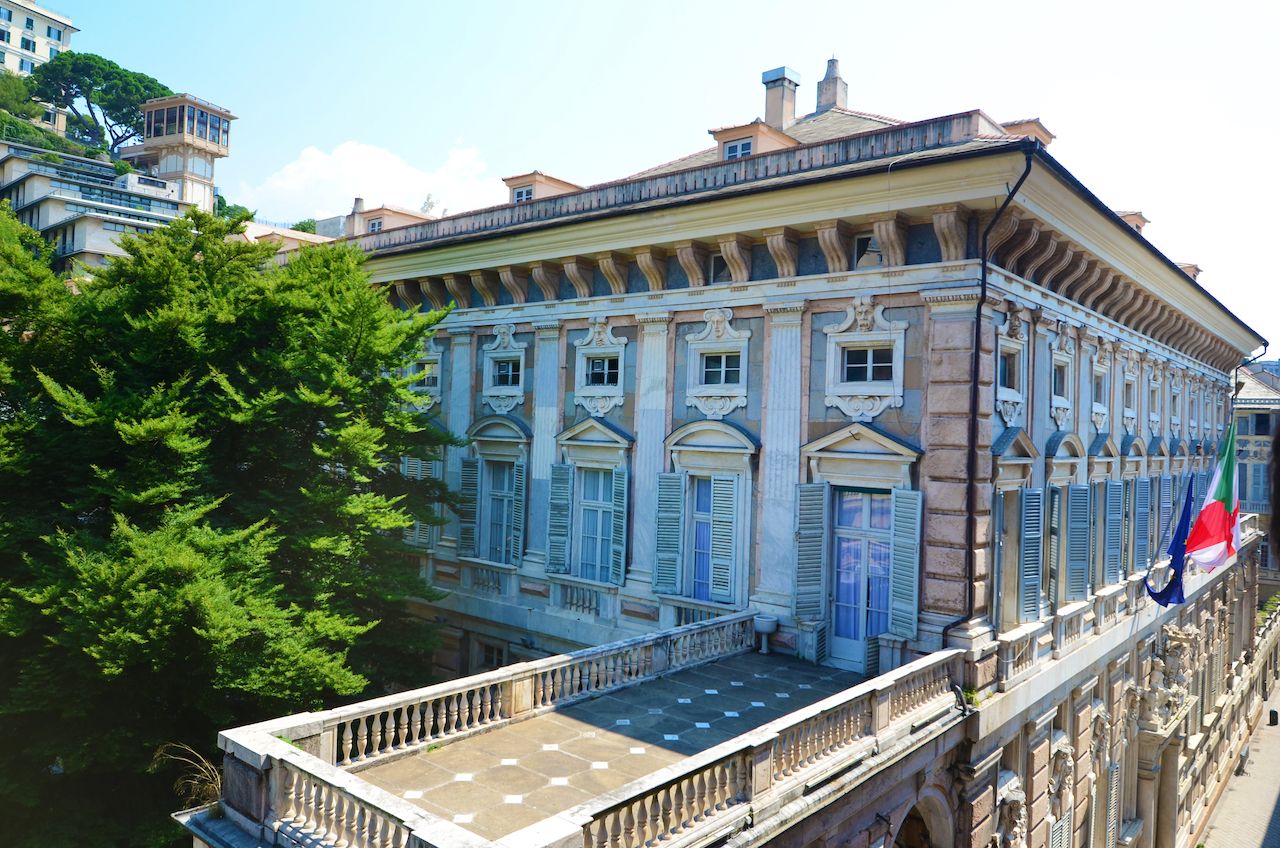 Right across the street is Palazzo Bianco, or White Palace, built for the Grimaldis, one of the most important families in Genoa’s history. The Grimaldis secured their fortune and power as shipowners and bankers thriving off Genoa’s port economy. This palace’s exterior is a light peach color and not actually white, as the name would suggest, and was named after all the white stone used in its construction. Visitors enter upon a sweeping marble staircase, a typical feature of Genoese palaces. Palazzo Bianco is home to the Civic Textiles Collections, an impressive display of 18th to 20th century Italian fashion. Palazzo Bianco’s magnificent courtyard, which is paved with black and white checkered marble and patterned pebble mosaics called risseu, is typical of the Liguria region. The courtyard is connected to Palazzo Doria-Tursi and offers wonderful views of Palazzo Rosso across the street. 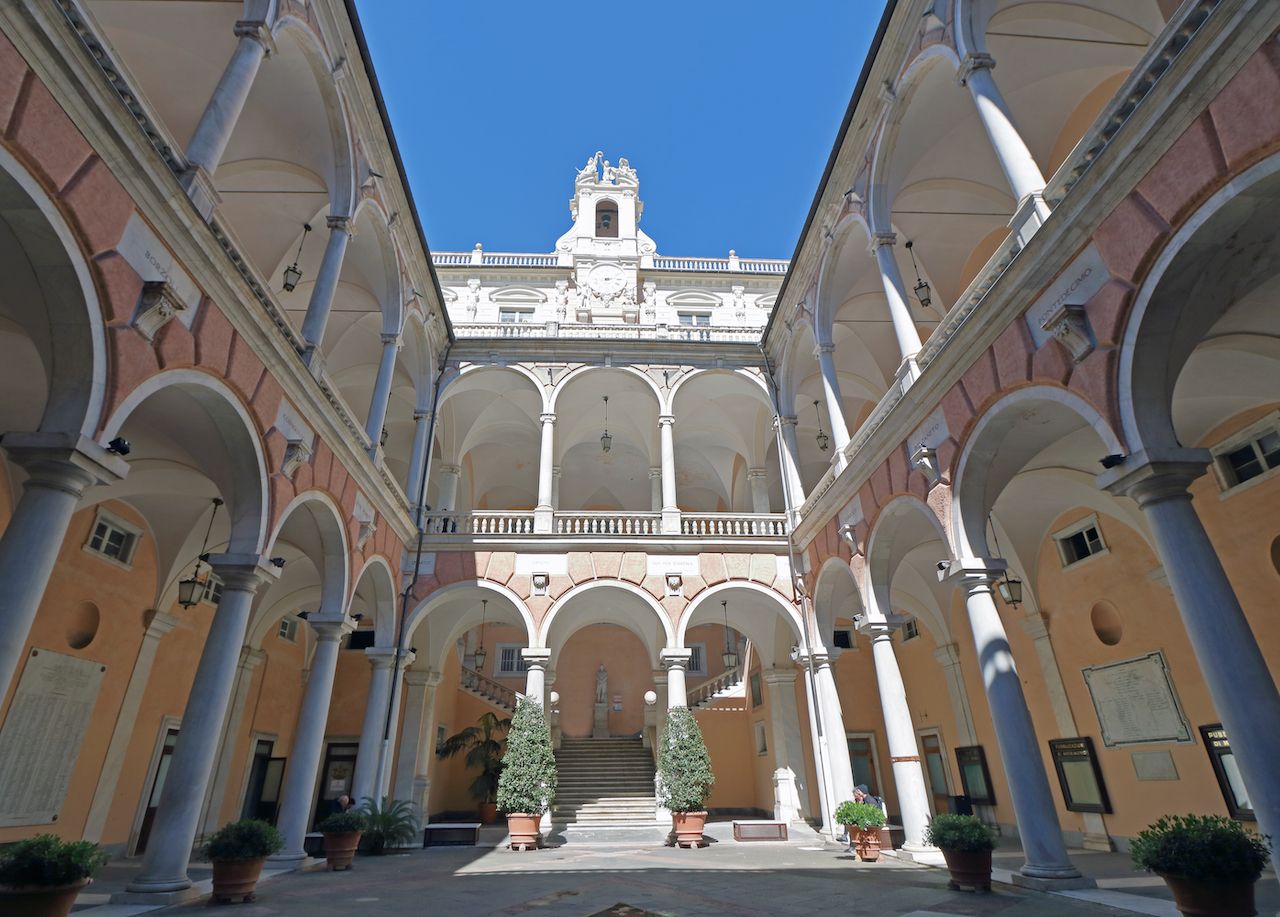 The final of the three Strada Nuova Museum palaces, you can enter Palazzo Doria-Tursi from Palazzo Bianco without even going outside. Originally built for Niccolo Grimaldi, nicknamed “The Monarch” due to his exorbitant wealth, the palace was purchased by the Doria family in 1597. These days, Palazzo Doria-Tursi is used mostly for city administration but you can still walk through parts of the building and admire its architectural splendor. There are art collections to browse on the lower level, including coins and pottery. The palace’s is Sala Paganini, a room dedicated to the famous composer and displaying his violin, worth millions of dollars. With grand proportions and another impressive staircase, Palazzo Doria-Tursi’s inner courtyard is a superb finale to the palaces of Via Garibaldi. 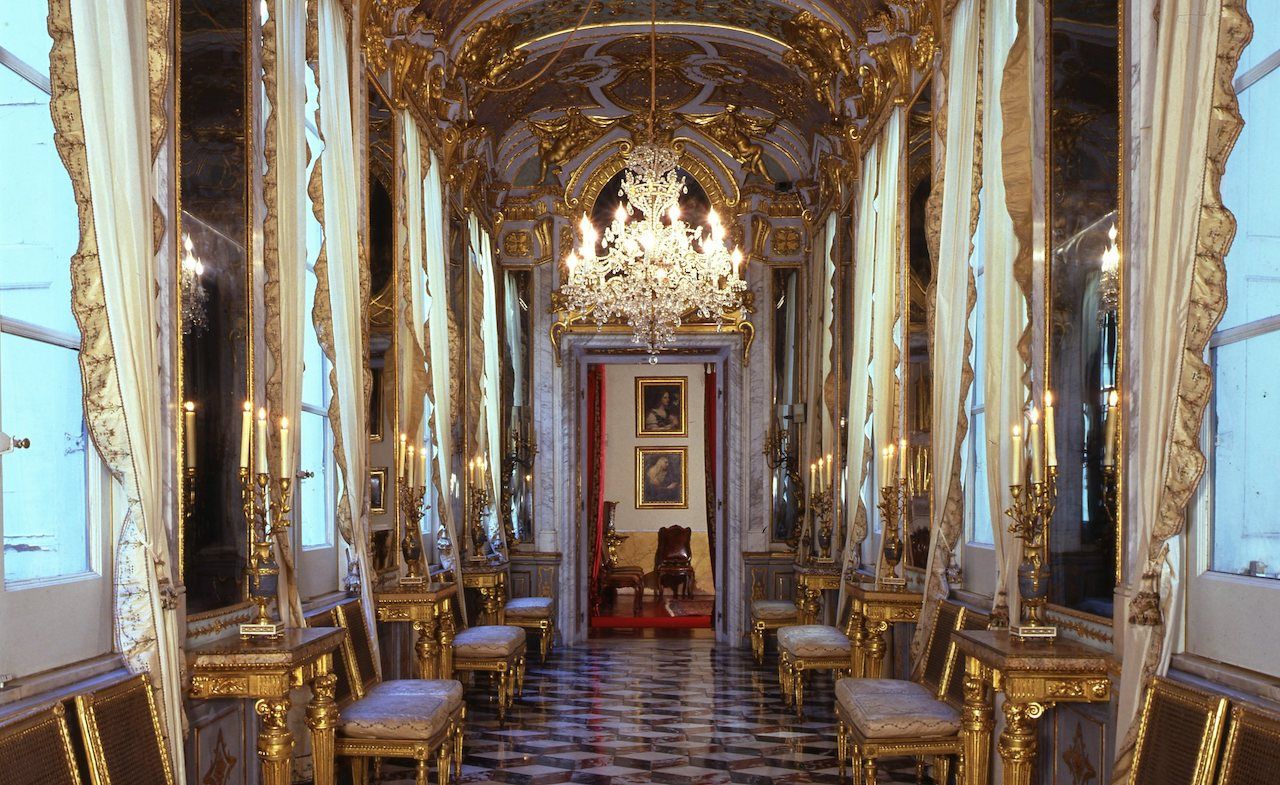 From Via Garibaldi, head back into the caruggi to Palazzo Spinola, which is also called the National Gallery. A little more difficult to find, you may have to ask for directions since almost every building in the historic center looks like it was once a palace. Built in 1593 by yet another Grimaldi, Palazzo Spinola was immediately added to the Rolli list’s top tier. (Genoa’s palaces are known collectively as Rolli palaces because of the long rolls of paper used to list the households and categorize them by size and splendor.) The palace still houses a good amount of furnishings but the main reason to visit is the art collection. The top two floors, destroyed by a bomb during World War II, have been transformed into an art museum, the National Gallery of Liguria. The Hall of Mirrors makes for a good photo op, a 1734 addition that was very much in fashion at the time. Entrance to Palazzo Spinola generally costs about $6.60, though it’s $2.20 for visitors 25 and under. 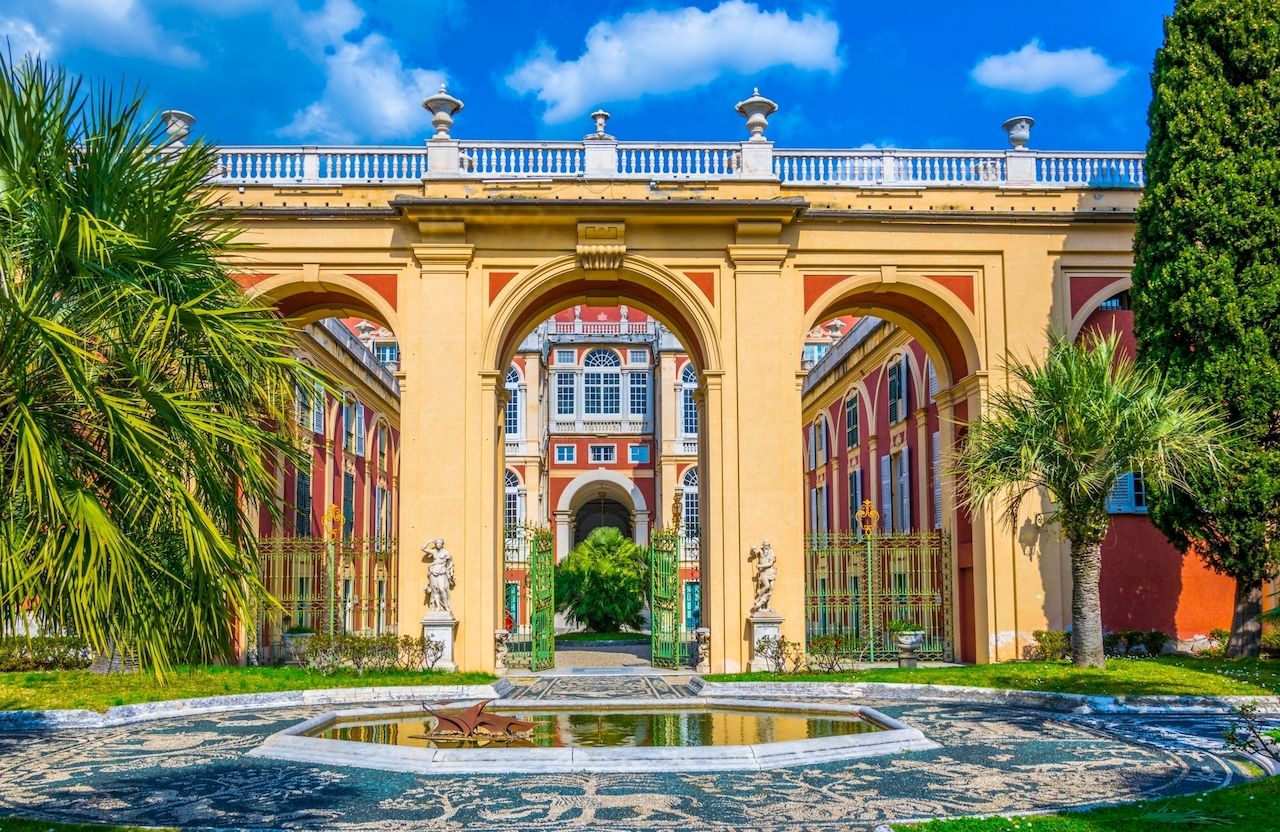 The Royal Palace of Genoa, Palazzo Reale, is easily the most extravagant palace you can visit in the city. Overlooking the sea, this palace was not originally built for royalty but rather the Balbi family who made their fortune as textile and silk merchants. The rooms are the most intact of all the palaces with impressive chandeliers, painted ceilings, and lavish furnishings throughout. The gold-gilded Hall of Mirrors here is far larger than the one at Palazzo Spinola and lined with marble statues. The Throne Room is another impressive sight with decadent red and gold details. You’ll end your tour on the rooftop terrace, which has one of the best views of the city. Entrance to Palazzo Reale is approximately $11. 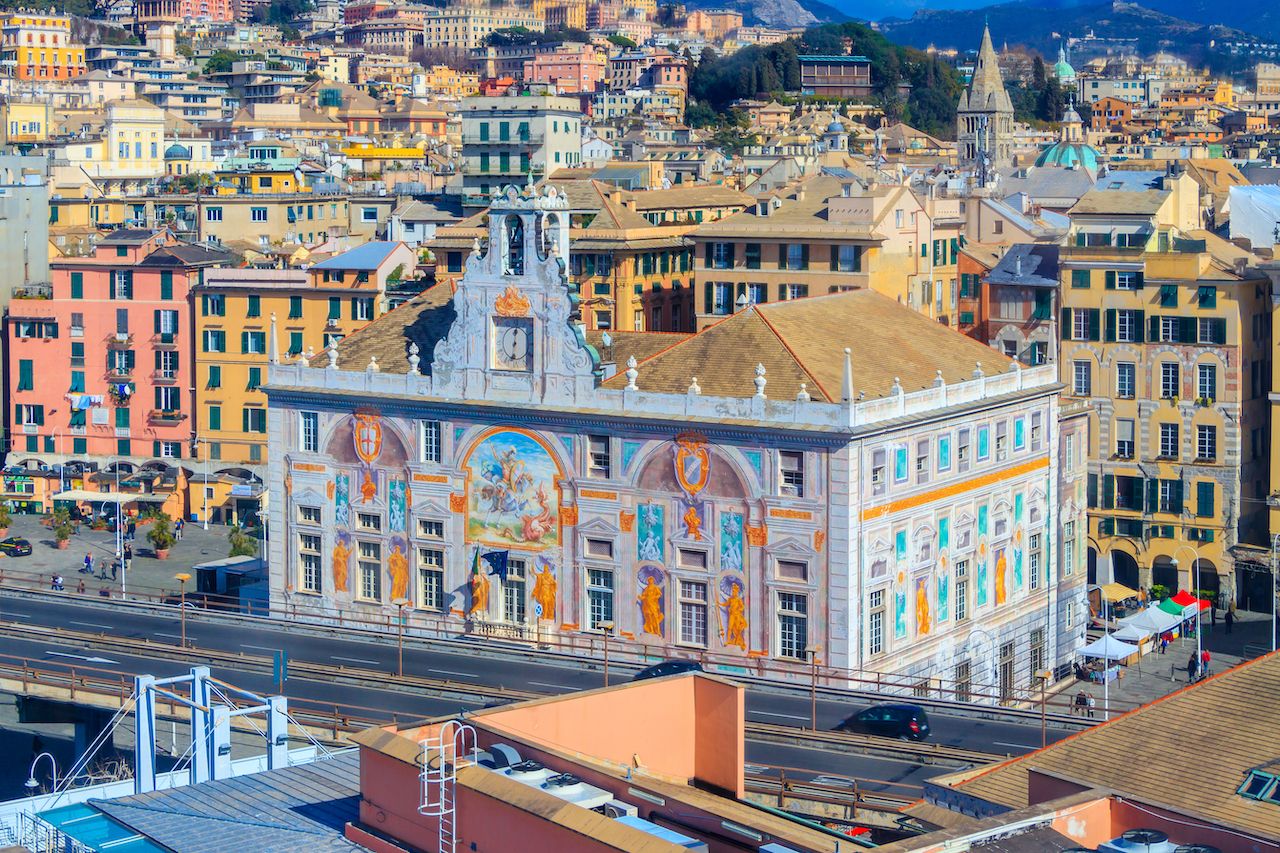 Palazzo San Giorgio, or Palace of St. George, is located right along the water in the heart of Porto Antico, the thriving port neighborhood of Genoa. Surrounded by modern constructions, the palace stands out like a fish out of water. Best known for its brightly frescoed exterior depicting St. George slaying a dragon, this palace was the first built in 1290. Palazzo San Giorgio once held Marco Polo prisoner and was constructed using materials from the demolished Venetian embassy in Constantinople. The building is now home to the offices of the Port Authority of Genoa and only open to public tours on occasional dates. After admiring the palace from the outside, though, you are welcome to walk into the lobby to see the grand staircase.

TravelWhy you should visit Milan even if you aren’t into fashion
Tagged
Art + Architecture Trip Planning
What did you think of this story?
Meh
Good
Awesome

May 19, 2021 Tim Wenger
✖
travelstoke
Download the mobile app
stoked by