When you think of wine country, the rolling hills of Napa Valley, the green fields of Tuscany, and the vineyards of Bordeaux may immediately spring to mind. Wine lovers certainly aren’t parched for options — hell, there’s even a wine region in every US state. Many of the best places for wine around the world, however, are taken over by crowds. Thankfully, that’s not so in the Rheingau, one of Germany’s top wine regions.

The Rheingau is just west of Frankfurt. It’s not among Germany’s most heavily trafficked destinations, nor is it typically the first stop on a wine connoisseur’s Euro tour, yet the Rheingau is as close to the epitome of ideal wine country as it gets. It’s the home of the Riesling grape, and wherever you go in the Rheingau, it feels like people drink Riesling like they drink water. The area is attractive even for people who aren’t wine enthusiasts, as the region is dotted with small towns along the Rhine River that have an abundance of classic German architecture, food, and culture. The next time you go to Germany, it should be for a Rheingau visit.

Where to stay on a trip to the Rheingau 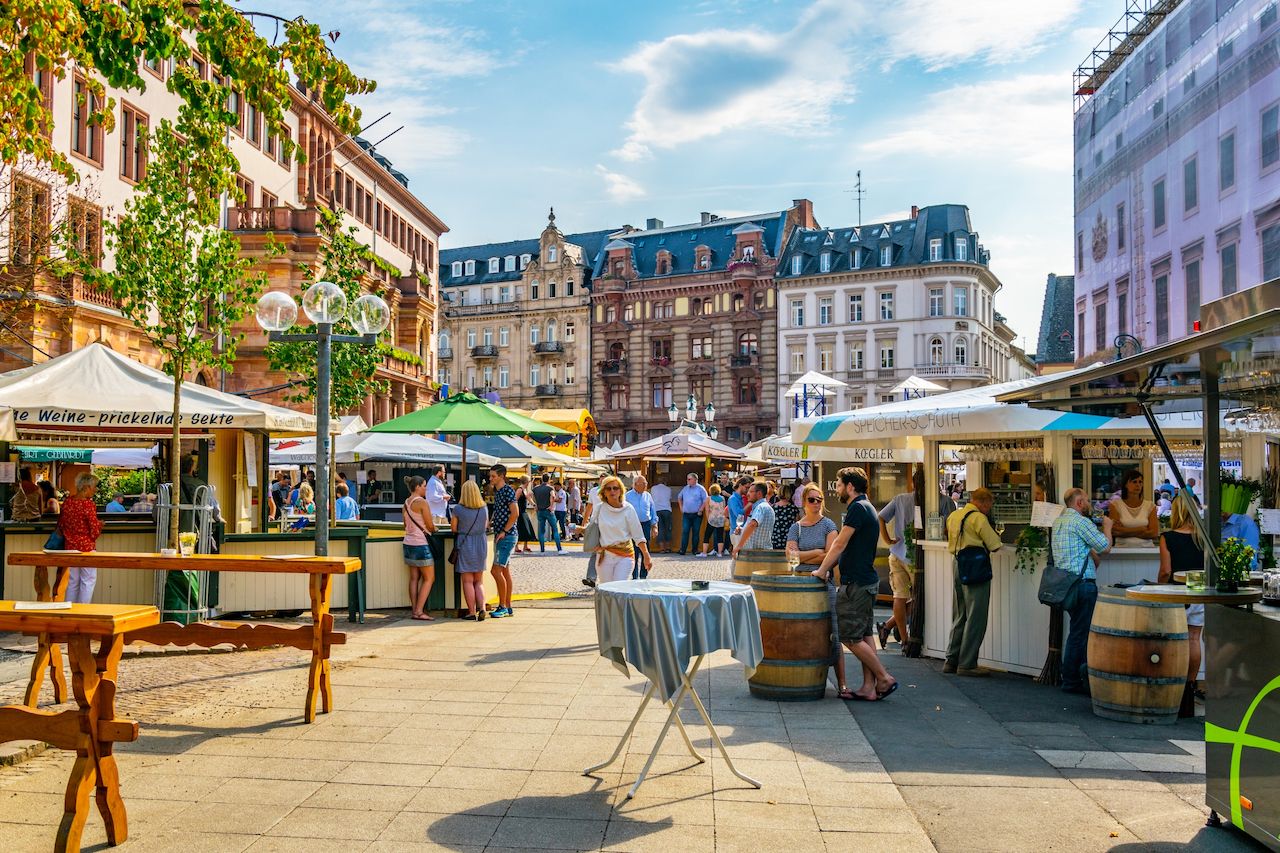 The Rheingau region is just 20 minutes away from Wiesbaden, the capital of the German state of Hesse. A prominent global spa town in the 19th century, Wiesbaden is still famous for its restorative waters, wide range of cultural activities, and prime location. Whether by train or by car, it’s the perfect base for exploring the Rheingau. Not only are there geothermal spas where you can relax (and sober up) after a tough day of drinking Riesling — there are 26 hot springs throughout the city — there’s also an ornate casino reminiscent of Monte Carlo that’s said to be the inspiration for Dostoevsky’s The Gambler.

Once you’ve followed in the Russian author’s footsteps and lose all your money at the casino, you can sample some traditional German chocolates to lift your spirits. The Swiss and Belgians might get all the shine, but German chocolate deserves similar praise. You can’t leave Wiesbaden without stopping at Chocolateria Kunder, which manufactures its own chocolates, or Cafe Maldaner, the only Austrian-style chocolate cafe in Germany.

Wiesbaden may have all the offerings and comforts of a metropolitan city, but a 10-minute drive north will bring you to what feels like the heart of the countryside. Ride the Neroberg funicular railway to the top of an 800-foot hill, where you can walk a nature trail that skirts alongside a gilded Russian church.

The best winery tours through the Rheingau 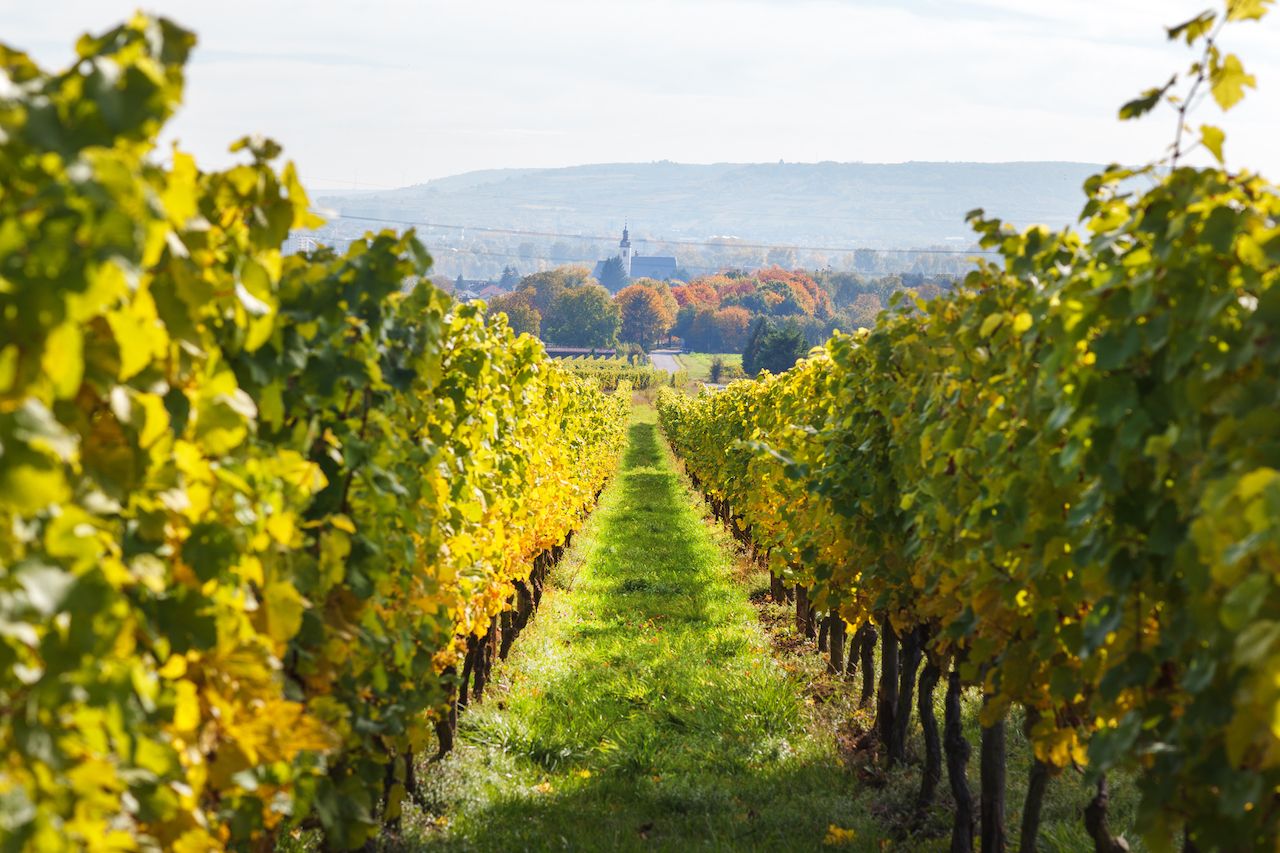 The Rheingau is home to 7,600 acres of vineyards that are located on the banks of the Rhine River, and spans about 30 miles from Wiesbaden to Rudesheim. The area is famous for producing a dry Riesling with citrus aromas. Some 90 percent of the Rheingau’s vineyards are located on the Rhine’s northern banks, and winemakers rely heavily upon the river for its moderating effect on the climate.

For the full wine experience, follow the signposted routes through the region. They vary only depending on your preferred mode of transportation. The Rheingauer Riesling Route is intended for driving, the Rheingauer Riesling Pfad for hiking, and the Rheingauer Radwanderweg for cycling. Regardless of which route you choose, you’ll find yourself traveling over high trails, through vineyards, and past castle ruins, monasteries, and small, picturesque towns. Including secondary connections, the Riesling routes span more than 74 miles, though you can experience as much or as little as you wish according to your itinerary.

If you find yourself in the Rheingau during the summer, you might catch the annual Rheingau Musik Festival, a “unique combination of culture and nature, music, enjoyment, and joie de vivre.” The festival takes place every summer, and this year it’s on June 26.

Visit the town of Rudesheim 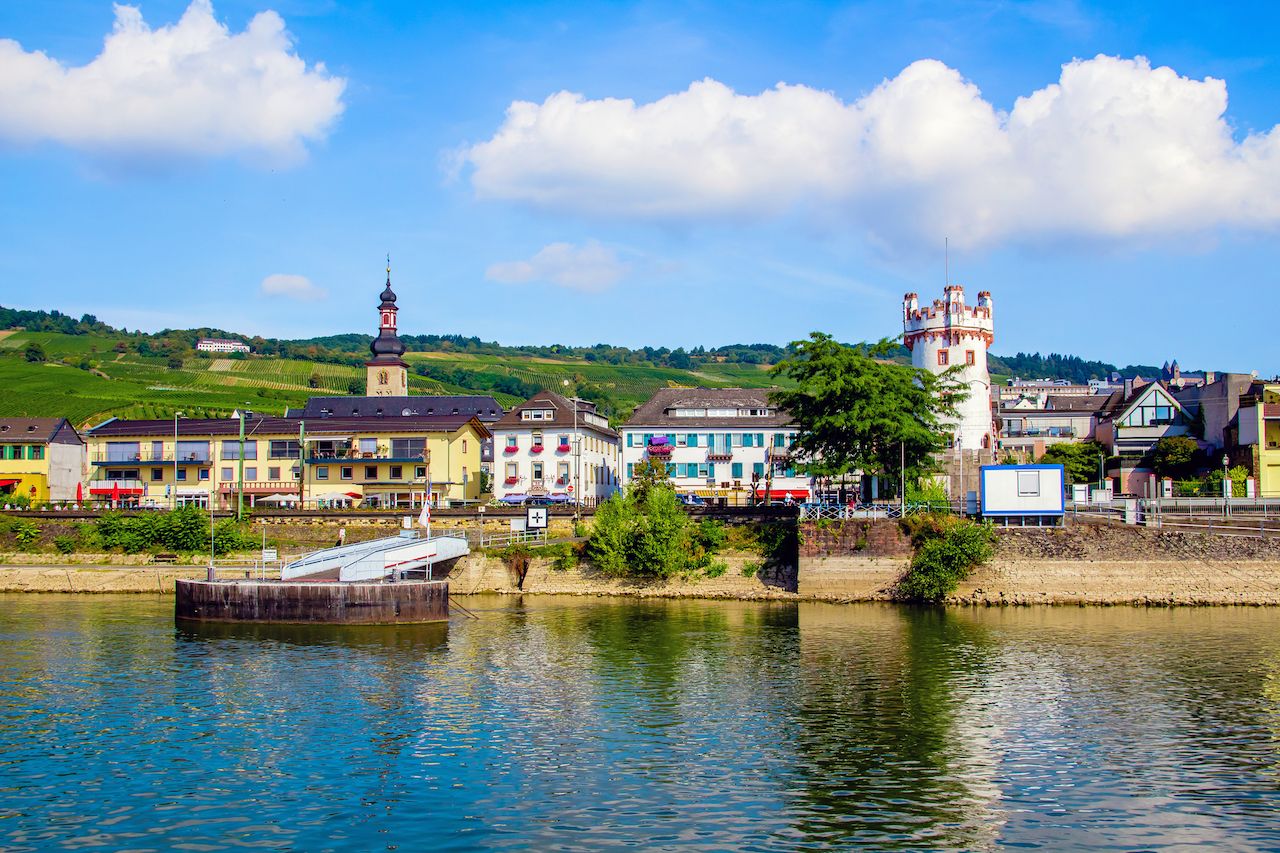 Just over half an hour from Wiesbaden, Rudesheim is a classic German winemaking town on the banks of the Rhine. The best way to begin your day in Rudesheim is by taking the 15-minute cable car up to the Germania monument, which overlooks the old town, vineyards, and the river. The massive monument was built in 1871, commemorates the founding of the German Empire and the Unification of Germany, and is a great way to introduce yourself to the history of the region.

Take the chairlift back into town, and you’ll immediately find yourself surrounded by classic German buildings, aromatic bakeries, and restaurants serving up local fare. Rudesheim’s most famous street is the Drosselgasse, a 15th-century alley that used to be a passage for sailors carrying their oars, sails, and rigging back to their homes. Now, the street is filled with half-timbered homes and wine taverns. Drosselhof is a great place to sit outside and enjoy sausages, schnitzel, potatoes, and, of course, more Riesling.

If you haven’t had your fill of wine quite yet, you can visit the Brömserburg, one of the first stone castles in the Rhine Gorge, built in the 12th century. Now, it’s a UNESCO World Heritage site housing the Rheingau Wine Museum and features exhibits on wine culture and history. 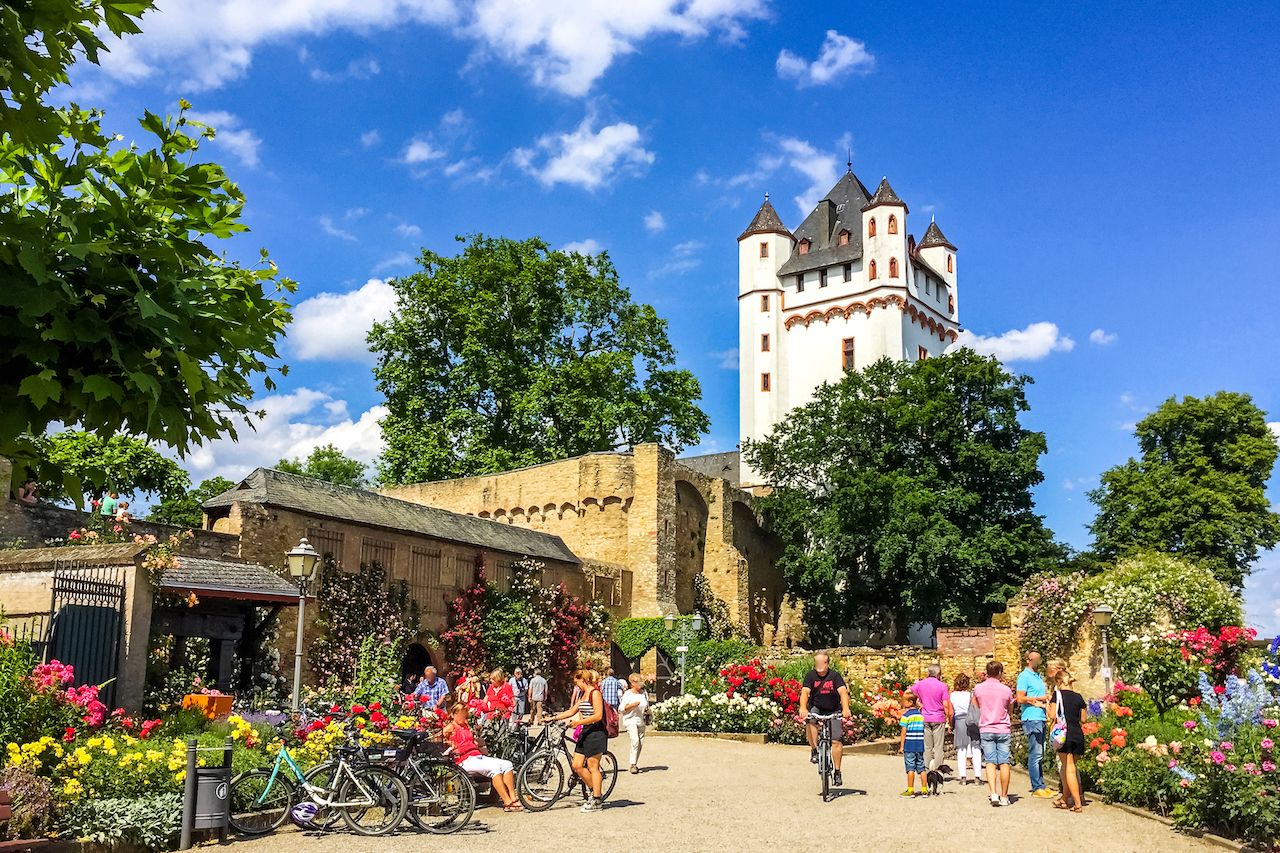 A scenic 20-minute drive east along the Rhine will bring you to Eltville, the largest town in the Rheingau. On a nice day, you can find most residents and visitors strolling along the Platz von Motrichard promenade, which runs right alongside the river and brings you to Electoral Castle. The castle is a 14th-century structure with a 79-foot tower and rose gardens perfect for a spring or summer walk. You can climb the steps to the tower’s top for a sweeping view of the town and surrounding vineyards, before returning to Platz von Motrichard and diving into the town’s booming wine culture.

The Eltviller Weinprobierstad should be your first stop. This wine-tasting stand on Platz von Montrichard is a collaboration between eight Eltville wineries, each of which freely gives away samples of Riesling and Pinot Noir. Every week, the Eltville winemakers use the stand to showcase their offerings, and it’s the perfect place to sample some local vintages while enjoying river views. Once you’ve got a healthy buzz, you can venture into the historic town and visit one of the many wine taverns or wineries, like Weingut Koegler or Weinhaus Krone. 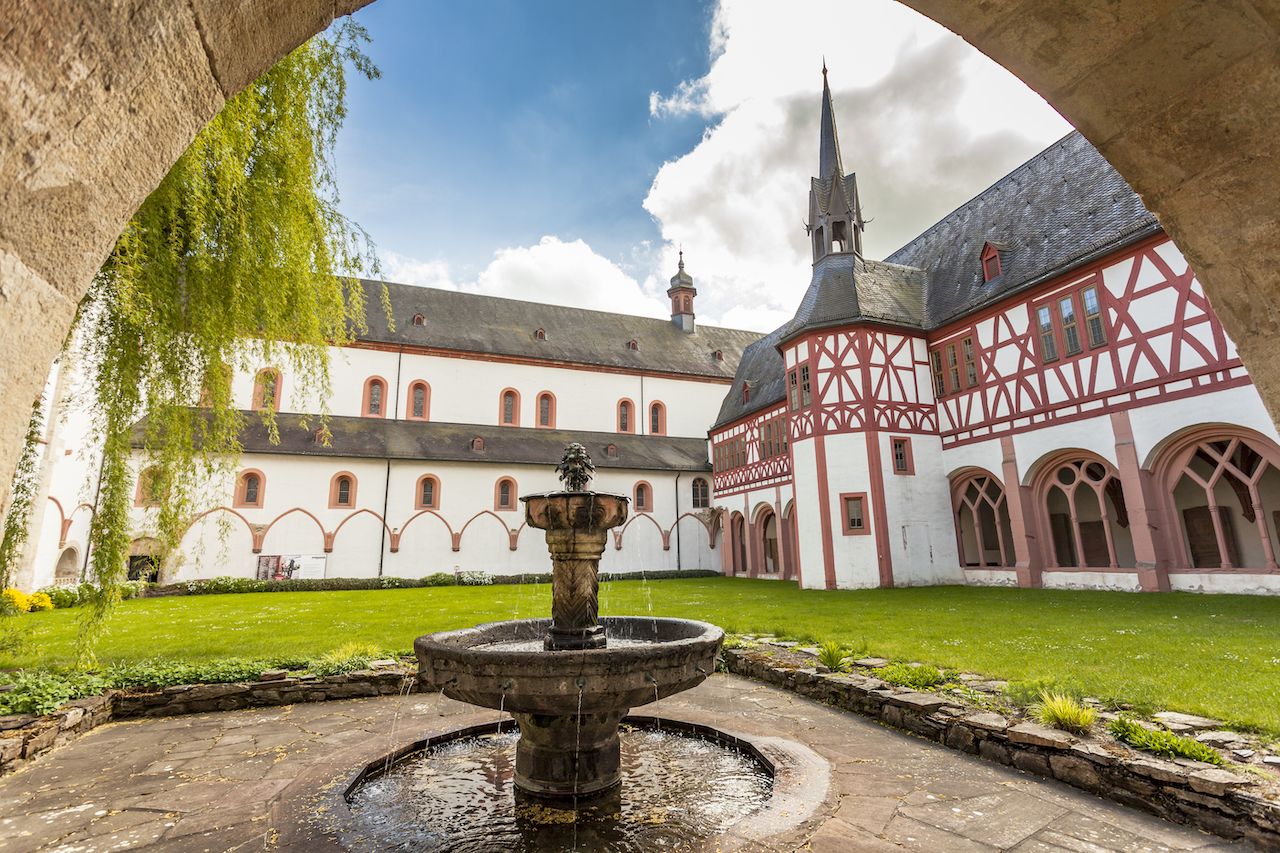 Perhaps surprisingly, one of the Rheingau’s biggest wine-producing spots is a church. The Eberbach Abbey, a 12-minute drive from Eltville, was home to the largest vineyards in medieval Europe, which are now managed by the state of Hesse. The 12th-century abbey is home to around 500 acres of cultivated vineyards, three-quarters of which are planted with Riesling. The monastery serves primarily as an event venue — the Rheingau Musik Festival takes place here — but also runs guided tours through its cloisters, halls, and wine cellars.

However much you’re able to fit into your trip, you won’t be disappointed by a wine-fueled vacation to Germany’s Rheingau region.

Trip PlanningThe 7 Most Exciting Places To Travel To Drink Wine in 2019
Tagged
Trip Planning Wine Germany
What did you think of this story?
Meh
Good
Awesome