Frankfurt has a small image problem. When you think about the other major German cities, certain images come to mind. Berlin has the art and edgy vibe. Hamburg has the parties. Munich has the beer and the pretty buildings. The stereotypical image of Frankfurt isn’t so exciting. In fact, most people probably associate it with big banks and airline transfers. Plus sausages, too.

Those people are missing out. While there is some truth to these stereotypes, Frankfurt has so much more to offer. The city has existed for well over 1,000 years and it’s pretty much the exact geographic center of Europe. A city with those credentials couldn’t possibly be the stuffy financial center of popular misconceptions. Here’s why Frankfurt is the most underrated city in Germany. 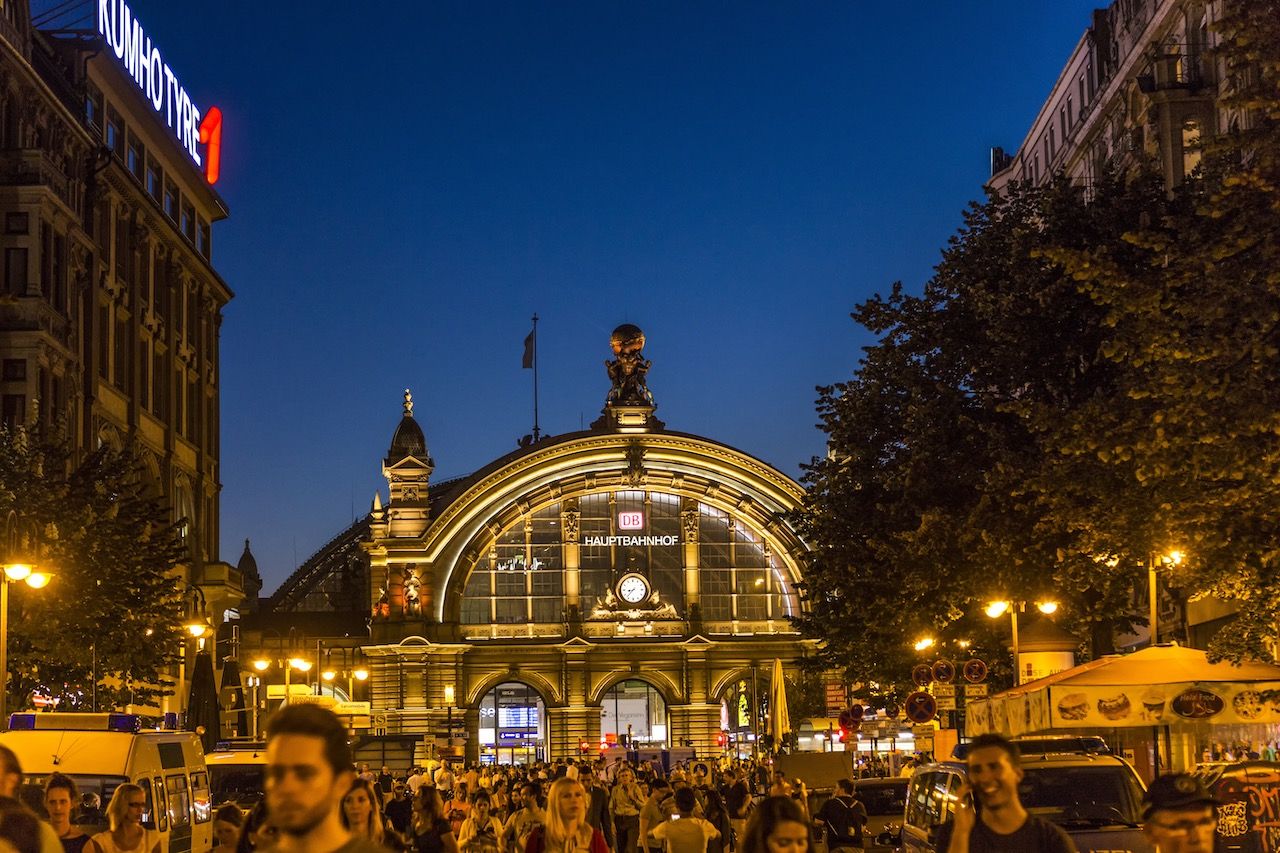 Named after Frankfurt’s main train station, the Bahnhofsviertel district is a stark contrast to the glass and steel of the city’s financial center. Historically, this had been a fairly deprived neighborhood, as well the home to the city’s red light district since just after World War II.

While some seedy elements remain, the area is perfectly safe. These days the cheap rents have helped to turn Bahnhofsviertel into the city’s youngest and trendiest neighborhood. Think craft beer, artisan coffee, and vegan joints and you’ll be on the right track. Don’t miss Plank if you want a flavor of the unique Bahnhofsviertel vibe.

Bahnhofsviertel is also a reflection of Frankfurt’s status as one of the most international cities there is. On Tuesdays and Thursdays, the nearby Kaiserstrasse Wochenmarkt serves a mixture of German and international cuisines, as well as fresh produces, bread, and even local wines. On the same street, you’ll find Kaiserpassage, a 1970s thoroughfare turned international bazaar. In this arcade, goods are sold from the Far East and Global South, and is home to tailors, hairdressers, and spice merchants. If you like the smell of incense, this is the place for you.

You can get out into nature. 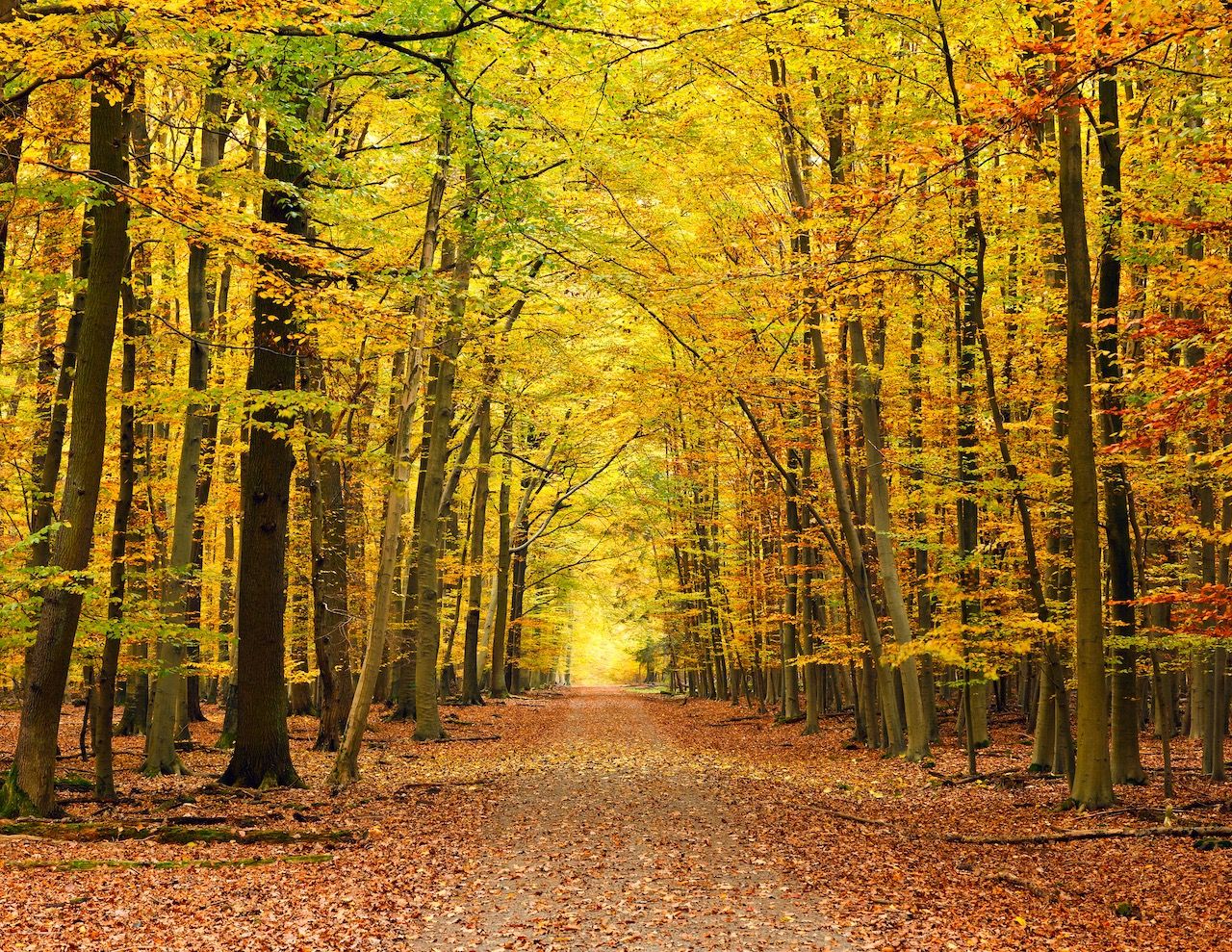 Frankfurt is situated on the Main River. This provides a fantastic opportunity for the city’s residents and visitors to get out and relax away from the noise of the city. While this can be done on a small canoe or dinghy, if you want a more festive experience, you should rent a slightly larger, well appointed boat from Partyboot.

Right outside the city, you’ll also find Frankfurt’s municipal woods, the largest forest in all of Germany. It includes a nearly 40-mile path for walking and cycling, which encircles the entire city. There’s also a range of different hiking routes to suit all abilities and timescales.

If you have a little bit less time on your hands, Frankfurt is also one of the greenest cities in Europe, with over 40 dedicated parkland areas. The best of these is Bethmannpark, with its famous Chinese walled garden. This is the perfect spot either for a bit of quiet meditation or a sneaky Instagram opportunity.

Cheese comes with a sense of humor. 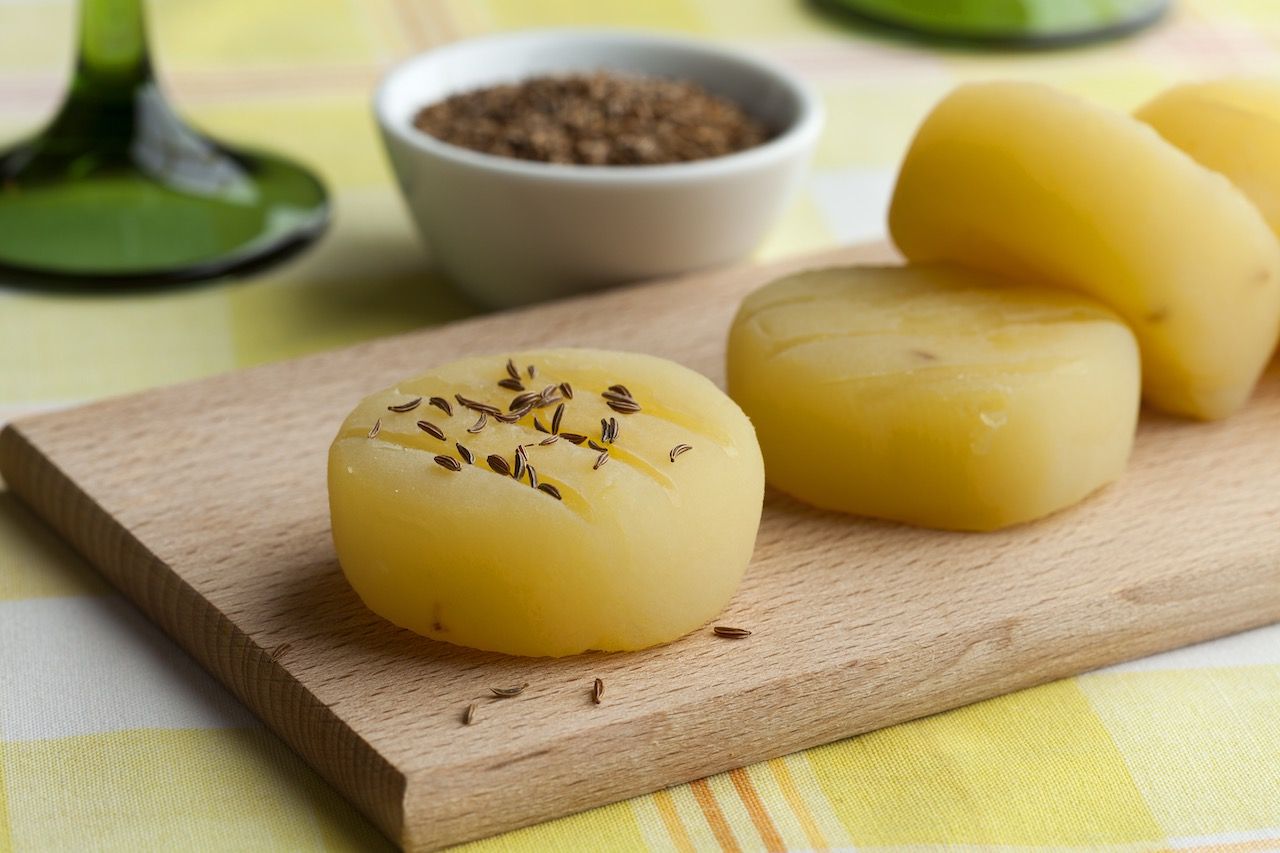 One of Frankfurt’s most established delicacies is handkäse mit musik. That’s “hand cheese with music,” if you’re German isn’t up to scratch. The hand cheese part isn’t so difficult to explain. The sour cream-based cheeseballs are just small enough to fit in the palm of your hand.

The music, so they say, comes later. The dish is topped with a raw onion marmalade, which supposedly leads to flatulence after eating — there’s that famous German humor. Still, this delicacy is not to be missed. If nothing else, it’s a wonderful accompaniment to the local apfelwein, but more on that later.

The architecture is pretty cool. 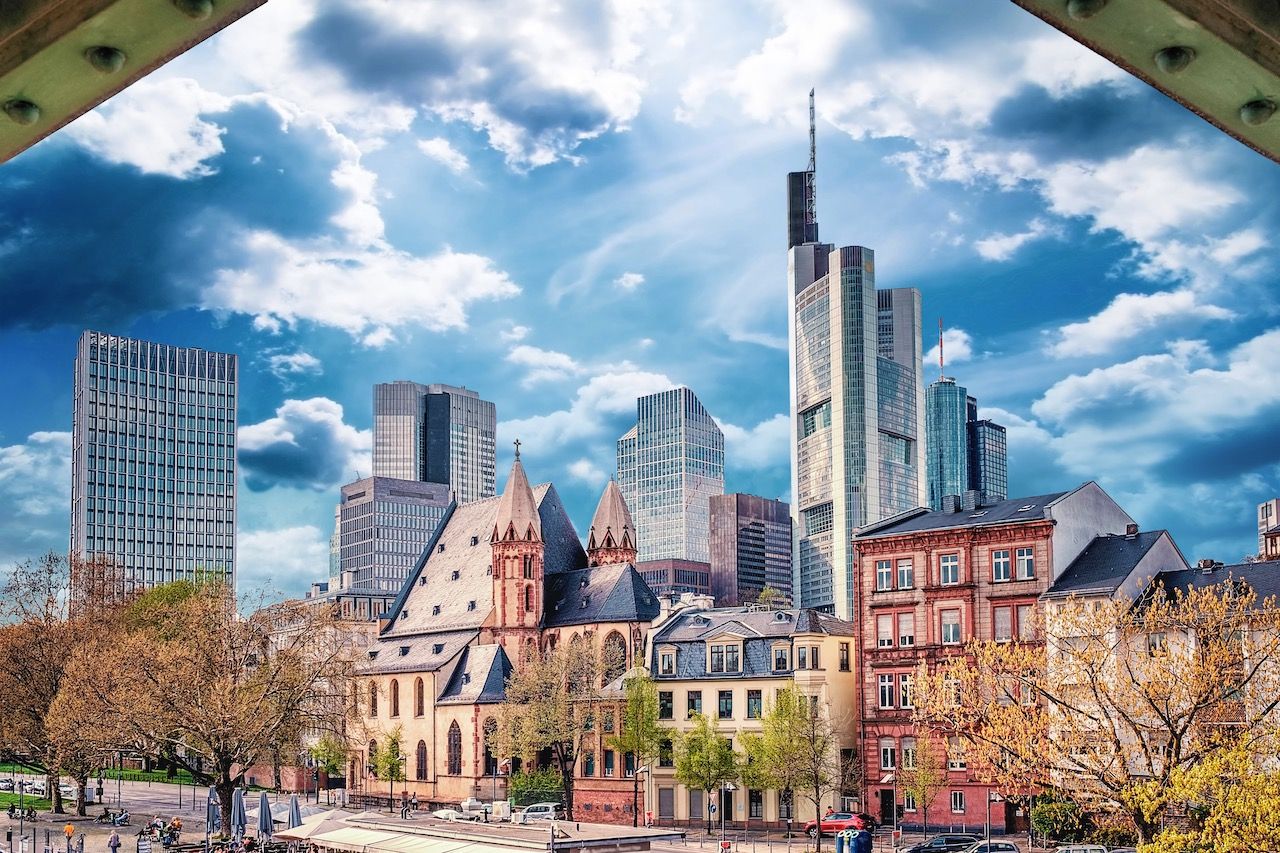 Frankfurt’s concrete and steel skyscrapers have led to it being affectionately referred to as Mainhatten, after it’s place on the Main. But not many of us go on holiday to stare up at gigantic glass protrusions. Still, they offer a nice counterpoint to the city’s many historical buildings.

The city’s most famous building is undoubtedly the Römer, the historical city hall which has stood on the same spot since the 1400s. It’s also the centerpiece of Frankfurt’s “new” old town, which is called such because around 90 percent of the area had to be rebuilt in the post-War era.

For something a little bit more contemporary, but with no less soul or character, special mention has to be given to the Tropicarium in the Palmengarten, Frankfurt’s botanical gardens. In an odd sort of way, it’s a bit like a giant glass flower filled with flowers. The rest of the gardens are the perfect location for relaxation if the bustle of Frankfurt gets to be too much for you.

The city has some serious culture. 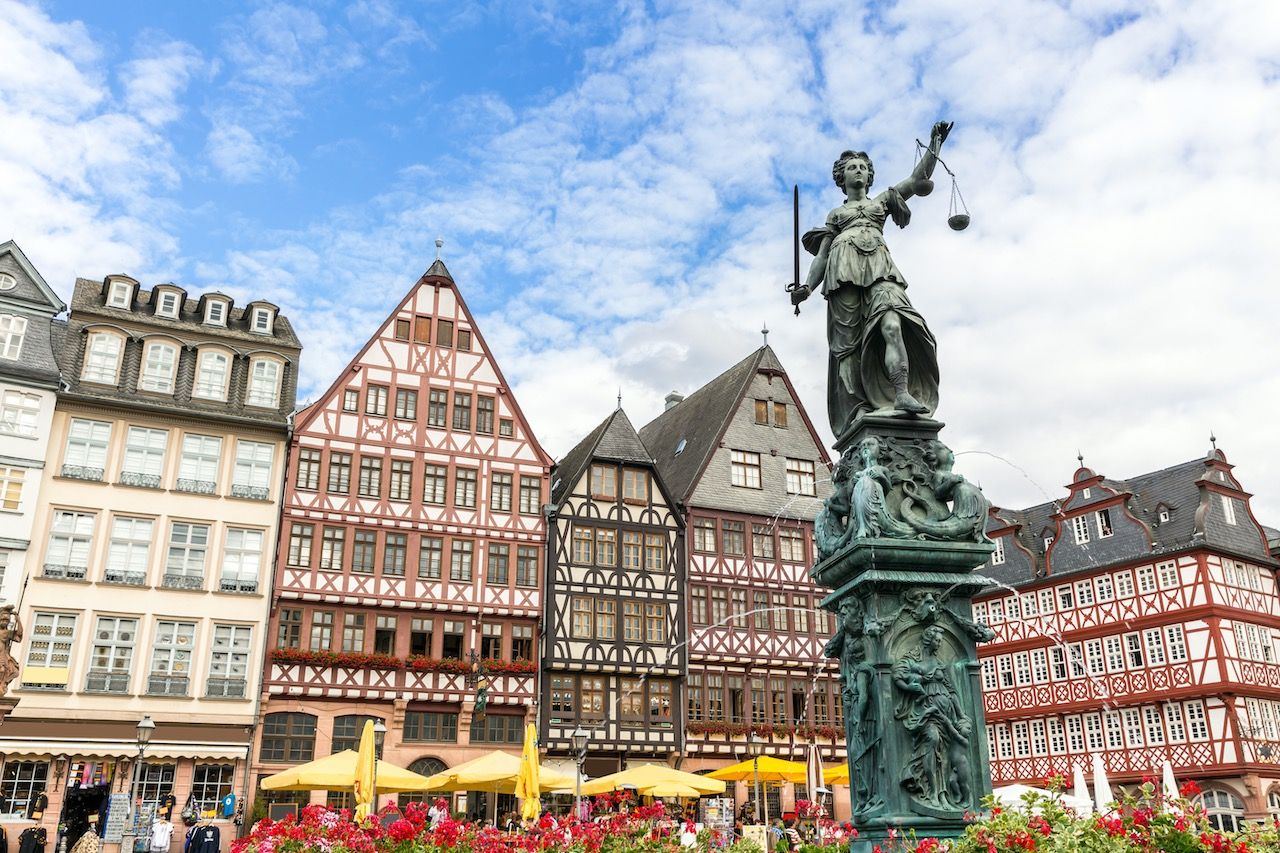 Frankfurt is also home to some seriously high-brow culture. This includes the birthplace of the city’s most famous son, the writer Johann Wolfgang von Goethe. Decorated in authentic 18th century furniture, the Goethe House tells the story of the environment which bore Germany’s most celebrated author.

No cultural tour of Frankfurt is complete without a visit to Alte Oper Frankfurt. This opera house was completed in 1880, in time to play host to premieres of works by Richard Wagner. However, it was almost completely destroyed during the war. In fact, until the late 1970s, the building was known as Germany’s most beautiful ruin. Today, guided tours are available, but the best way to enjoy this unique space is to attend one of over 450 annual events.

For something a little bit cruder, make your way to Oberschweinstiegschneise, where you’ll find a novel public artwork. Fed up with being urinated on for over 300 years, one of Frankfurt’s trees decided to get back at passersby. This is part of Frankfurt’s comic art initiative, and when you go home you can tell all your friends you’ve been peed on by a tree.

It’s the center of the world. 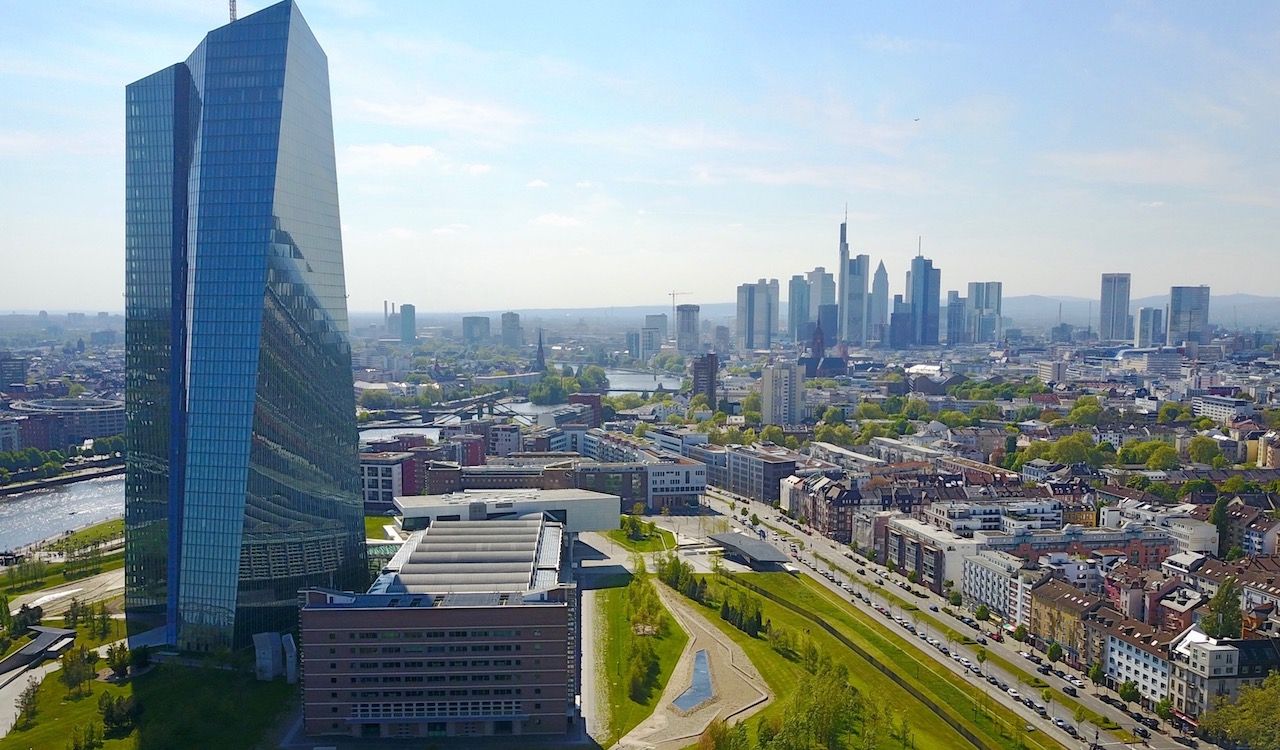 There’s a strong case to be made that Frankfurt is the center of the world, at least figuratively. All the same, its status as an international city means that there are expat communities from just about every nation on the earth.

Two things come with that. The first is food. You want it, Frankfurt has it. Highlights include late night Vietnamese street food from Sapores, as well as traditional Eritrean delights at African Queen. The other is international performances. Nobody does this better than the Frankfurt International Theatre, which every year hosts hundreds of concerts, plays, and performances from all over the world. They even stage a multitude of foreign language dramas, for all you linguists out there. 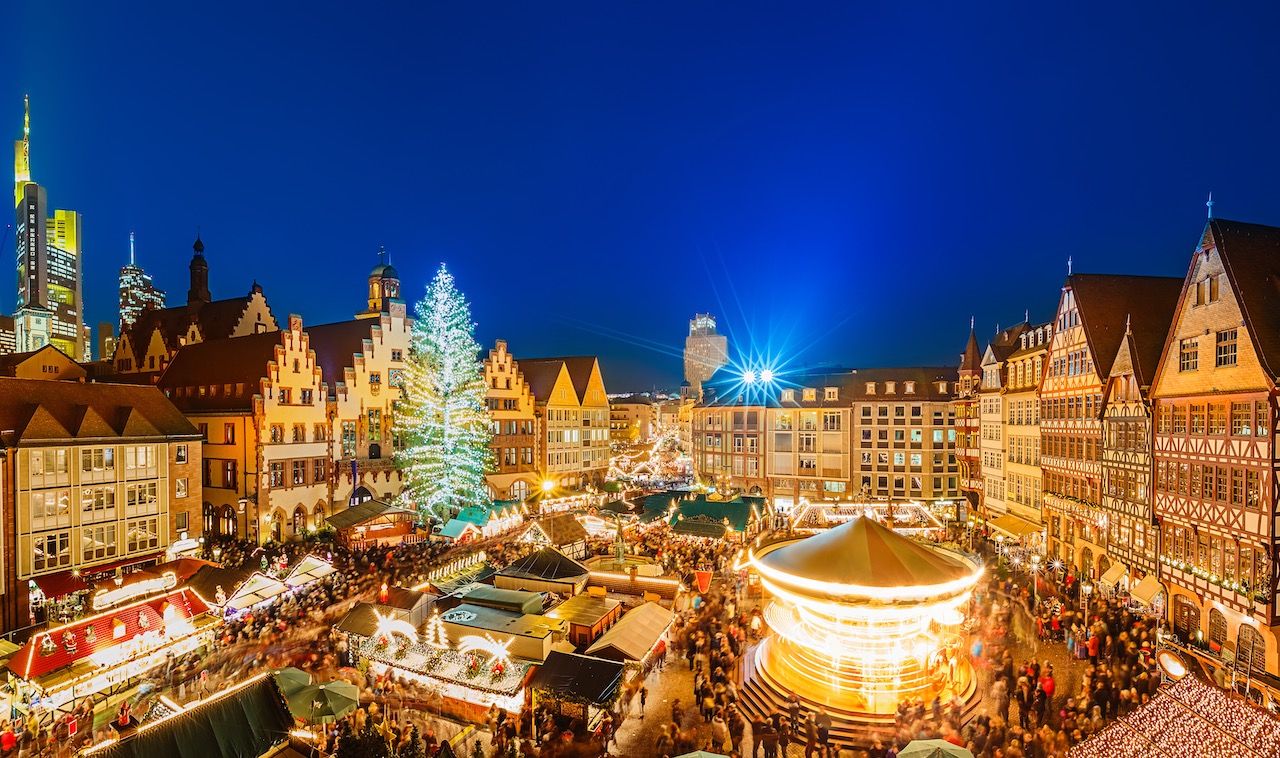 Every year, Frankfurt’s old town is transformed into one of Europe’s largest Christmas markets. The juxtaposition of the centuries old buildings with extensive Christmas lighting decorations will soften even the grinchiest of hearts.

Since way back in 1393, the market has provided festive joy to Frankfurters and foreigners alike. You’ll find all the traditional trappings, including Frankfurt’s eponymous sausages as well as ample choice of gluhwein.

Just make sure you wrap up tight. Despite being relatively far south and nowhere near the coast, Frankfurt winters can be fairly unforgiving.

You can drink apple wine. 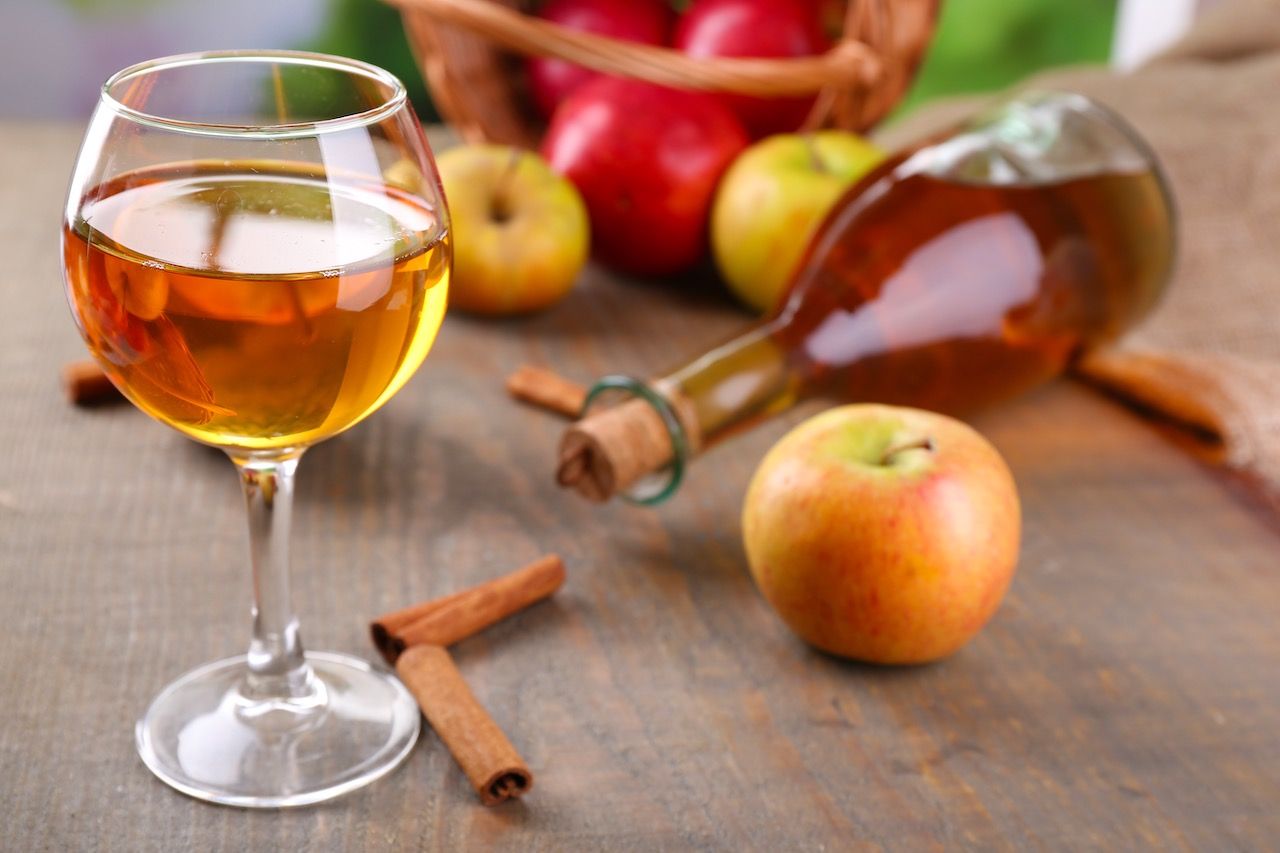 The rest of Germany is known for beer, but in Frankfurt cider is king. The locals call it apfelwein, or apple wine, and drink it from peculiar angular glasses which reflect the light as you drink. While it’s a strange look, you’ll be thankful for the extra grip when you’ve had a couple.

Apfelwein is available in most bars and restaurants, but it’s best enjoyed in one of the city’s many dedicated cider taverns. In particular, check out Solzer, which has been serving apfelwein and accompanying traditional dishes since 1893.

In the winter months, you need to get yourself a hot apfelwein, served with lemon and cinnamon. Its distinctive warming qualities will be more than enough to sustain you through a full day of sightseeing in even the worst German winter.

You can get some retail therapy. 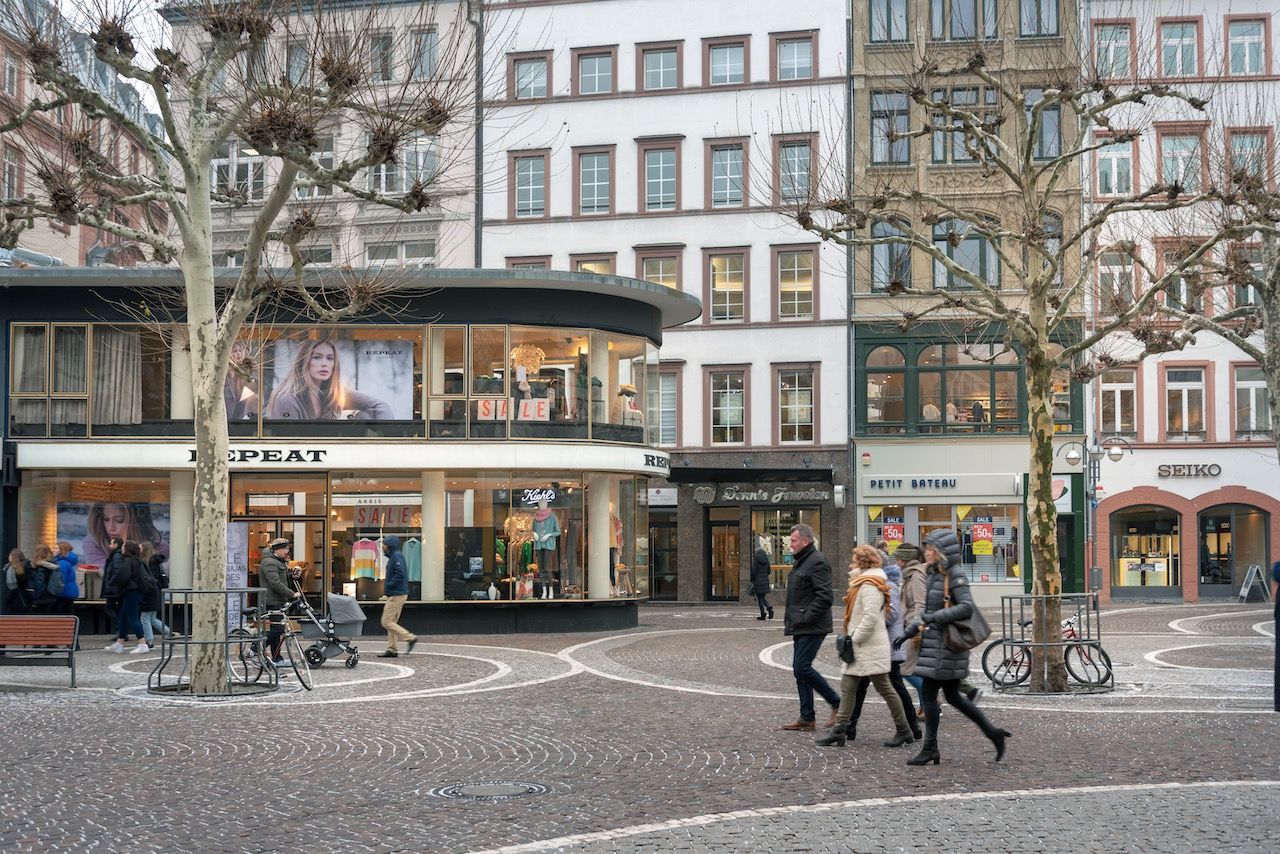 Many of Frankfurt’s residents are employed in the financial sector. Because of this, a lot of the city’s shops are geared towards expensive tastes. Head over to Goethestrasse and you’ll find famous names like Versace and Louis Vuitton. Even if you’re not going to drop thousands on a belt, you’ll get a kick out of pretending.

For slightly more modest tastes, Brückenstrasse is home to a wide array of local, independent boutiques and showrooms. From timeless minimalism to the downright wacky, you’re sure to finds something to suit your own unique style.

If fashion isn’t your bag, Frankfurt Flea Market has you covered. Every two weeks, bargain hunters and antique dealers alike descend on the banks of the Main to trade goods. Even if you’re not out to find a long lost Rembrandt, you’d be hard pressed to find a more enjoyable walk in town. 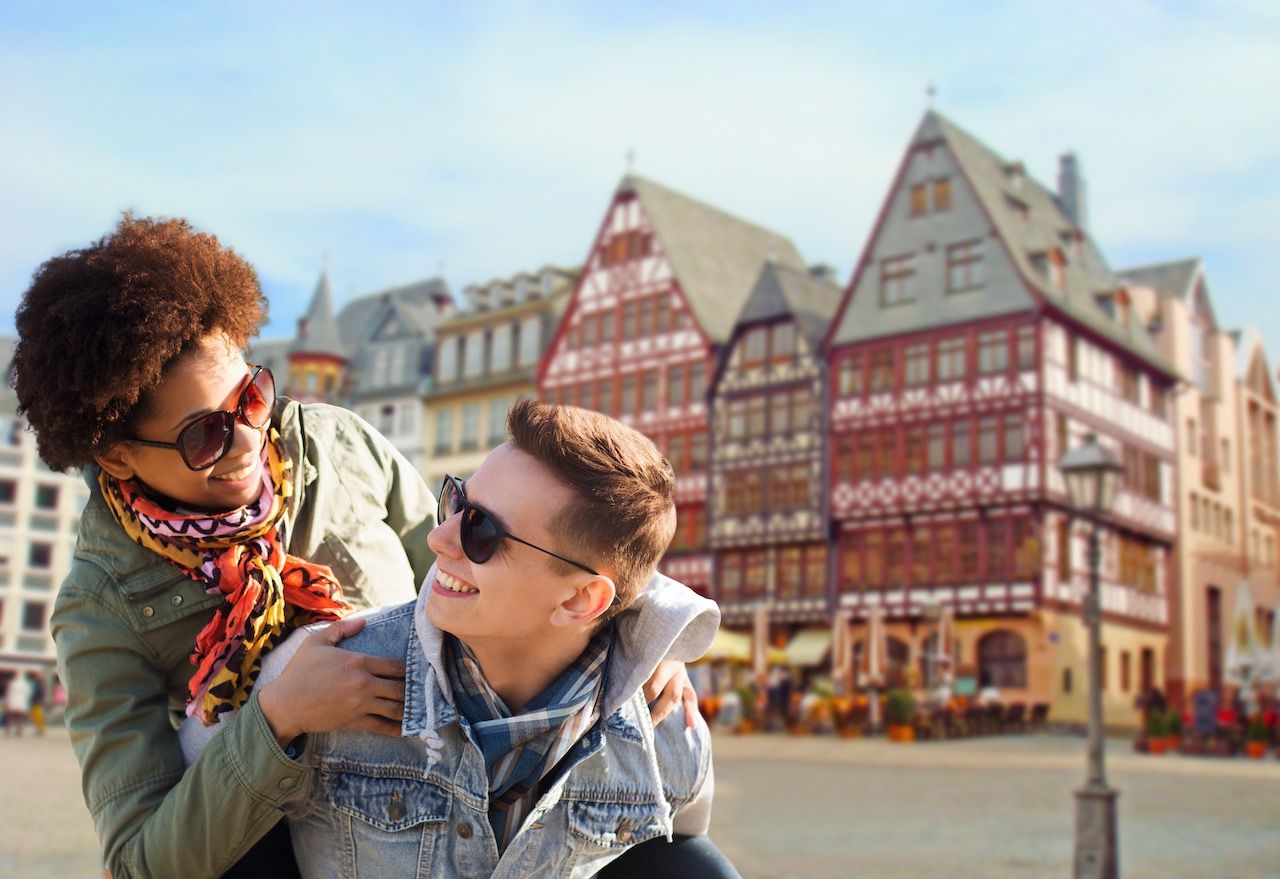 Perhaps the best thing Frankfurt has to offer compared to other German cities is that it’s relatively untouched by tourism. Unlike the other major cities, there’s relatively little chance of running in to a massive group of people from your own country, like you would on Hamburg’s Reeperbahn or queuing up outside Berghain in Berlin.

In fact, not many cities have hung on to their authenticity as well as Frankfurt. Sure, there are tourists, and plenty of expats too. But still, if it’s an authentic German experience you’re after, Frankfurt will never disappoint. After all, it’s pretty much been at the center of German culture for over 1,000 years, so it’s unlikely to change too much anytime soon.

CultureThe 8 Coolest Places in Sweden Worth Visiting Outside of Stockholm
Tagged
Travel
What did you think of this story?
Meh
Good
Awesome

Where To Eat and Drink at Germany’s Frankfurt Airport