America’s taste for cheesecake is evident. If it’s not diner menus across the country making the case, then the more than 200 Cheesecake Factory restaurants from Alabama to Wisconsin, which grew out of a humble cheesecake-only bakery in Los Angeles, give some indication.

But cheesecake existed long before Evelyn Overton started peddling the Cheesecake Factory’s namesake dessert in the 1970s. The concept of mixing fresh cheese (cheese that’s neither pressed nor aged) with eggs and flour, then baking it using hot stones, dates back to antiquity. Ancient Romans left records of libum and savillum, which Cato the Elder outlined in De Agri Cultura, one of the oldest surviving examples of Latin prose, in 160 BCE. In ancient Greece, where cheesecake is said to have originated in the third century, a similar recipe may have been offered to athletes at the first Olympic Games in 776 BCE.

The concept continued to evolve throughout medieval Europe. Italians have long baked cakes using ricotta that can be seen as precursors to today’s cheesecake, while a crustless, heart-shaped relative called coeur à la crème was popular in Victorian France.

American-style cheesecake recipes made their way into print by the late 19th century when chef and author Jessup Whitehead published The Steward’s Handbook and Guide to Party Catering. Yet the dense, indulgent dessert that’s so ubiquitous in the United States today specifically incorporates cream cheese, which Whitehead’s recipes do not specify.

It’s unclear when cream cheese was first introduced to lend modern American cheesecake its characteristic richness. One thing is certain, though: You can’t make a New York or Chicago-style cheesecake, America’s signature rivals, without it.

From the East Coast to Europe and Japan, these are the cheesecakes every fan needs to try. 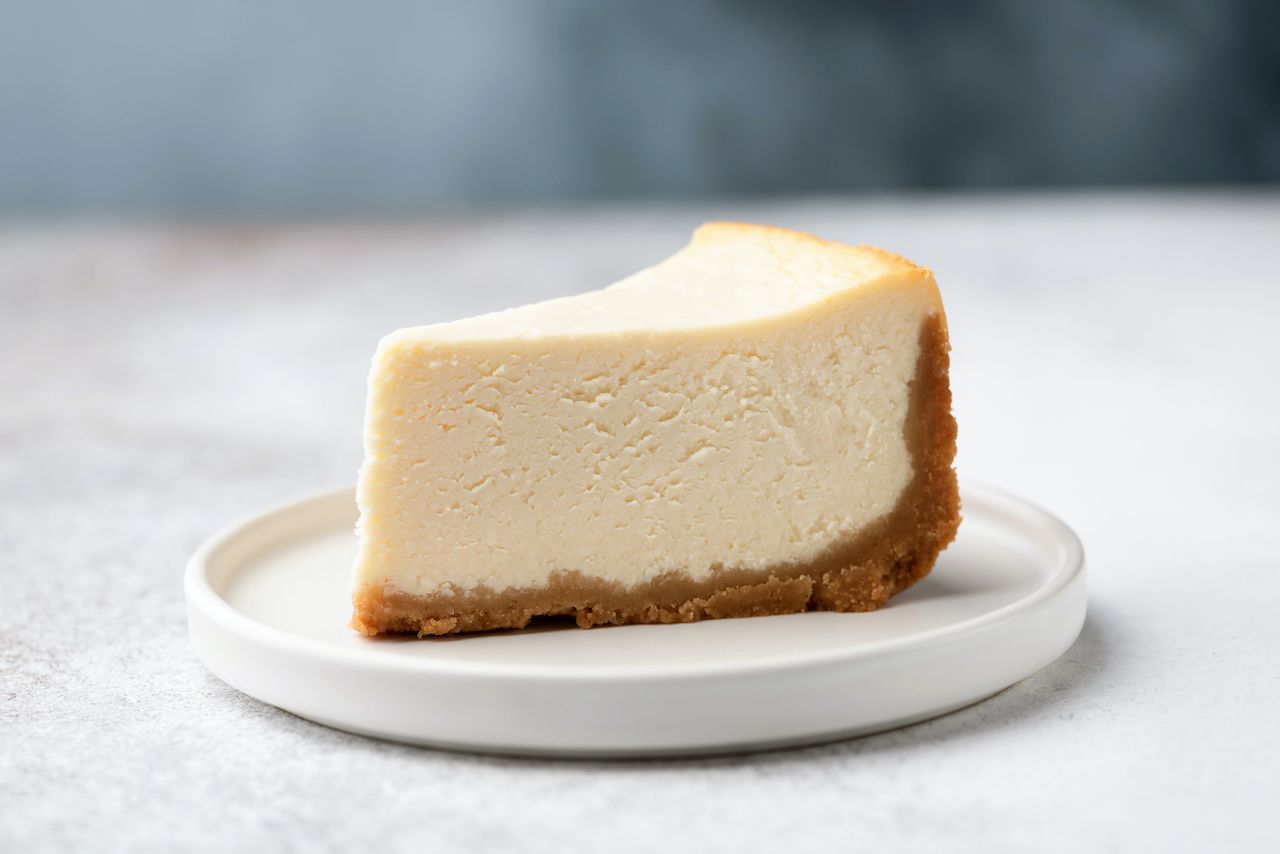 Cream cheese has been commercially produced in the United States since the 1870s, thanks to New York dairyman William Lawrence. Lawrence was in the business of making Neufchâtel, a soft cheese tracing back to sixth-century France, before he added cream to the pressed product and made an even richer cheese. According to food historian Sarah Wassberg Johnson, this likely set the stage for New York’s longtime obsession with cheesecake.

Legend has it that the first New York-style cheesecake can be attributed to Jewish deli owner Arnold Reuben, of Reuben sandwich fame. As the story goes, upon sampling a cheese pie made with farmer’s cheese, Reuben swapped the dairy product for cream cheese, creating a version that took New York City by storm. A second Manhattan deli, Lindy’s, allegedly hired Reuben’s pastry chef shortly after to produce its own legendary cheesecake, said Johnson. Lindy’s recipe was later enshrined in the hit musical Guys and Dolls, which made reference to the cheesecake at a stand-in restaurant called Mindy’s being the best in the country.

No matter its origin, New York cheesecake is distinct from other recipes. In addition to using cream cheese, bakers add sour or heavy cream to the filling. Extra egg yolks may be thrown in for extra richness. “The result is light as gauze. It also packs the wallop of a professional boxer. Americans understand this and champion it,” said Ed Levine, who considers heavy cream non-negotiable, in an essay published in 2006’s The New York Times Dessert Cookbook. This thick, velvety filling is then loaded into a graham cracker crust made from crumbled graham crackers, sugar, butter, and a pinch of salt. 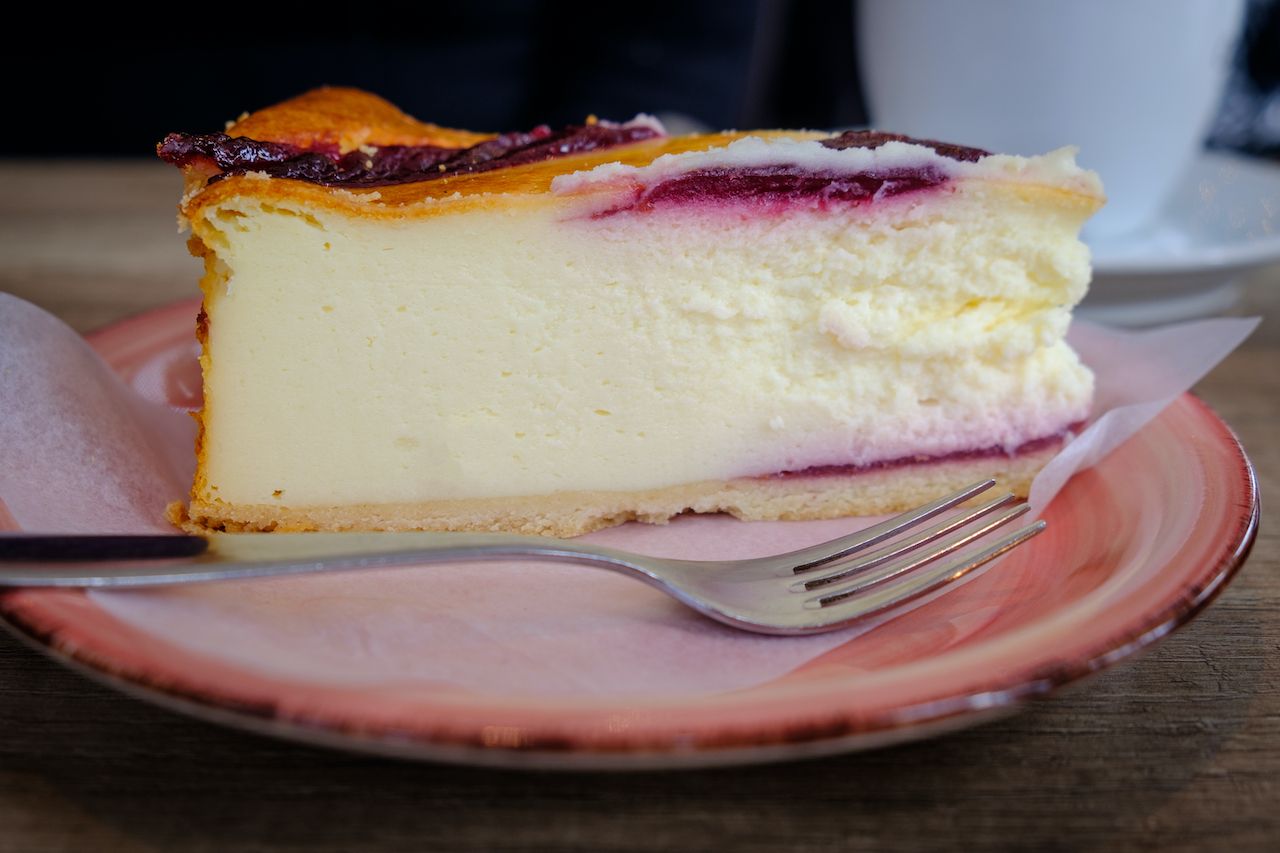 The history of German cheesecake is murky, as käsekuchen is an example of a European fresh-cheese dessert recipe that developed over the ages. It’s been around since at least the 1600s, and Austrians eat a similar cake known as topfenkuchen.

Rather than cream cheese, käsekuchen filling is made with quark, which is a fresh, unripened cheese with a small curd, plus eggs, milk, and sugar. It’s traditionally baked in a dough crust, though shortbread crust is not uncommon. Another variation, käsekuchen torte, incorporates cream and gelatin to set in lieu of being baked. Berries or other fruit may be added to the filling. 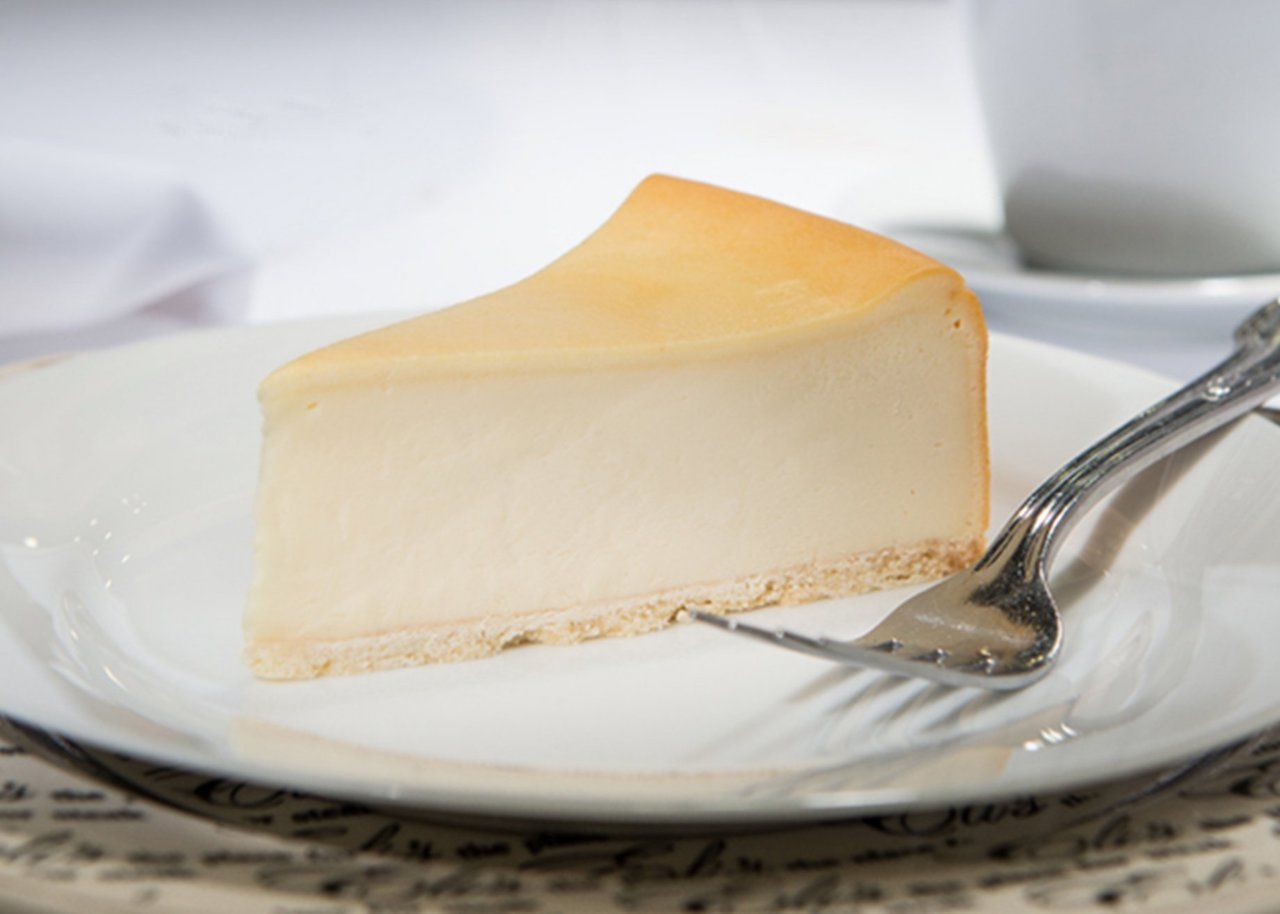 Chicago’s cheesecake origin story centers on one restaurateur, Eli Schulman, who became a local celebrity when up-and-coming stars like Barbara Streisand began frequenting his delicatessen. Schulman opened several successful eateries in Chicago over the next few decades, including Eli’s Cheesecake World in 1996.

Schulman was not the only Chicago restaurateur serving cheesecake when he endeavored to perfect the recipe at his 1966 steakhouse. He was, however, committed to creating the city’s fluffiest recipe, which he debuted at the inaugural Taste of Chicago in 1980. His success, and his cheesecake’s popularity, eventually led to the establishment of his dessert emporium, which churns out some 20,000 baked goods daily.

The secret to Eli’s Cheesecake Company’s proverbial hotcakes is slow-cultured cream cheese and the addition of sour cream. According to some Chicago cheesecake purists, however, the city’s signature style requires an extra dollop of cream cheese in place of sour cream. Whatever winds up in the filling is then smoothed onto a shortbread crust and baked in a greased cake pan, rather than a tall springform pan as used by most New York-style bakers. 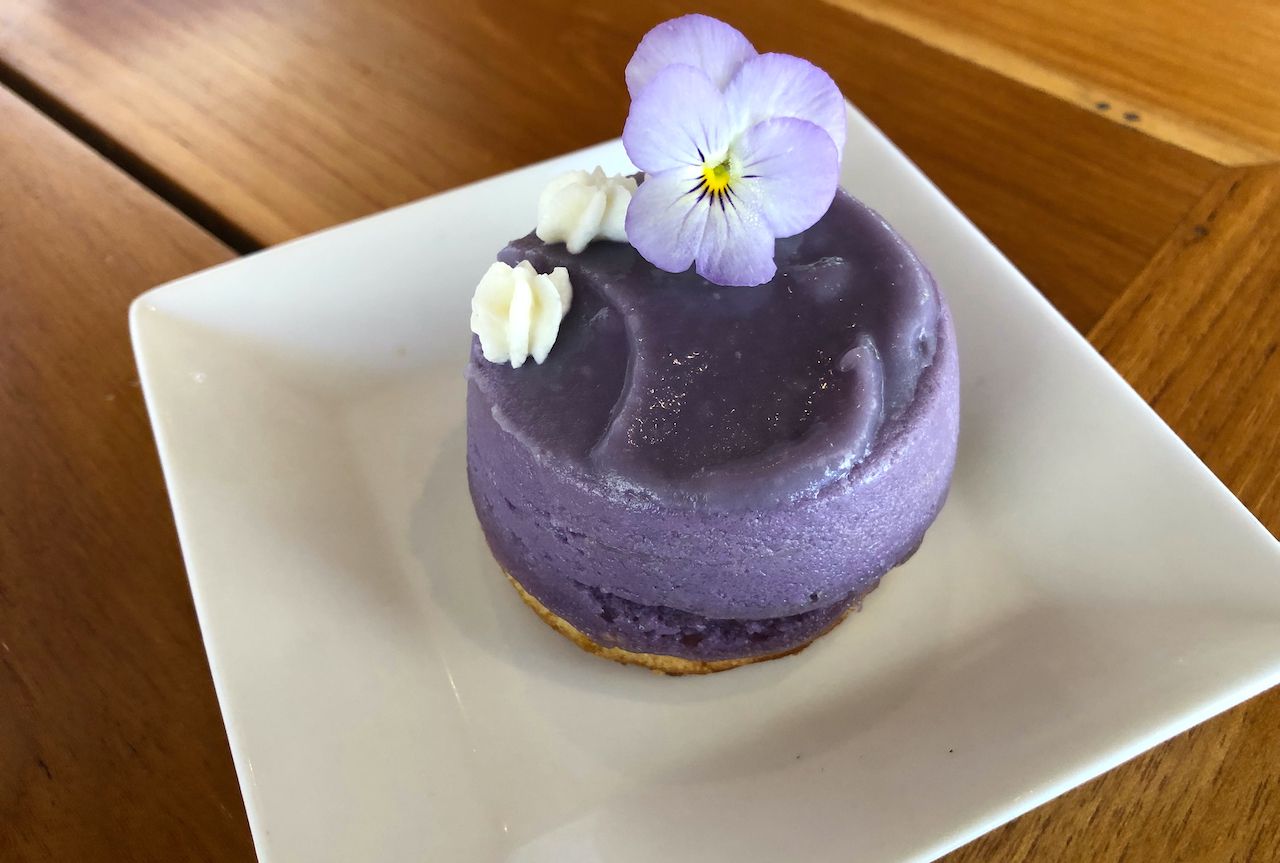 Cheesecake is purple in the Philippines thanks to its central ingredient: ube. Ube is a bright purple yam that’s sweeter than most sweet potatoes and used often in Pinoy desserts. To make no-bake ube cheesecake, the tuber is first boiled and mashed into a standalone sweet known as ube halaya, which is then mixed with cream cheese, vanilla, and maybe condensed milk. The purple concoction is spread onto a graham cracker, digestive, or cookie crust and served cold. A baked version also exists, which incorporates eggs into the batter but is still served chilled. 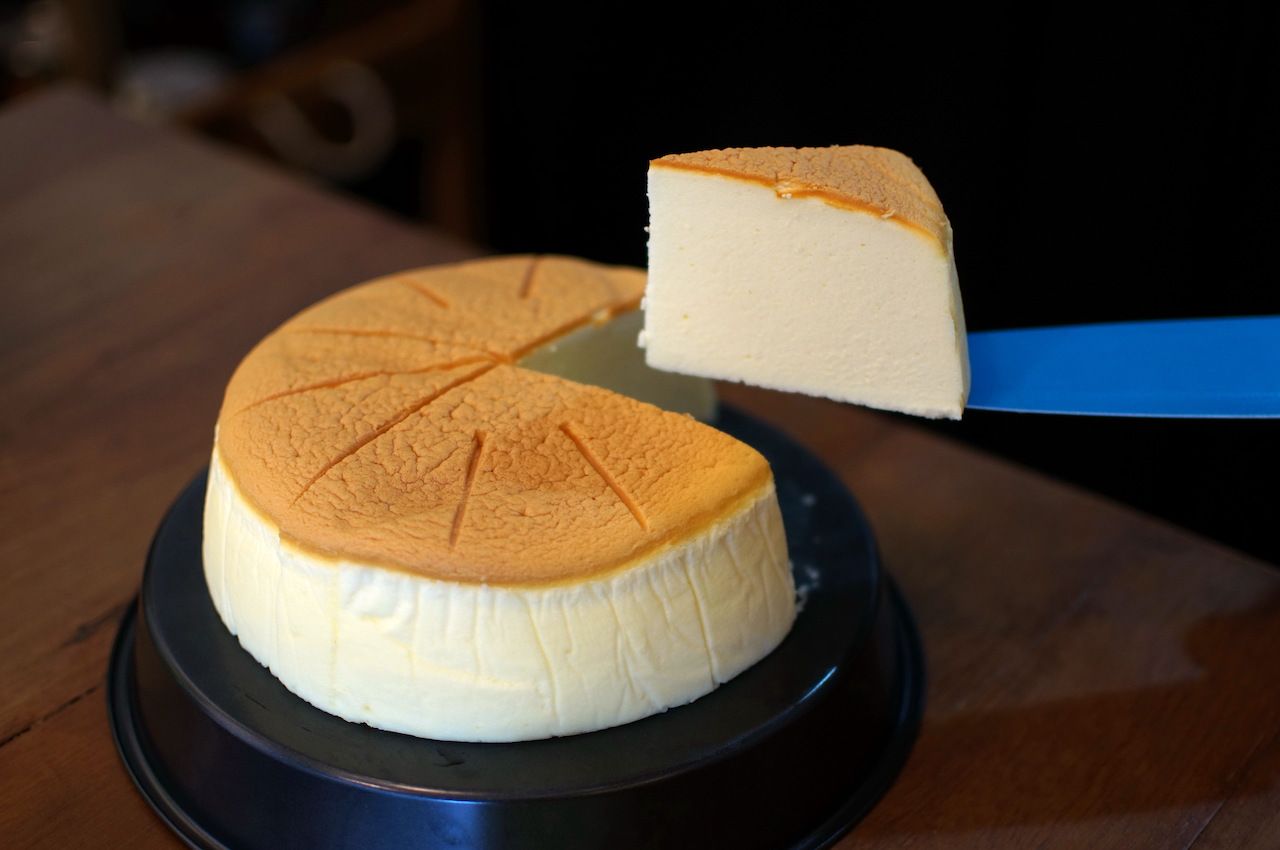 If Chicago’s cheesecake is famous for being fluffy, then Japan’s can be called the goosedown of desserts. It’s cakier than what diners typically see in the United States, with an impressive rise similar to Japanese pancakes and a delicate texture similar to souffle.

American soldiers brought cheesecake to Japan after World War II after introducing soft, Western cheeses to the Japanese palate. It was not commercialized until the 1960s, however, when confectionery king Tomotaro Kuzuno discovered käsekuchen, or German cheesecake, while traveling in Berlin. Chain bakery Rikuro Ojisan helped spread the recipe while Uncle Tetsu’s flagship location in Fukuoka was among the first in Japan to gain a following for the dessert in the 1990s. Thanks to social media, Japanese cheesecake also achieved its 15 minutes of internet fame in the mid-2010s.

A couple of factors contribute to the cheesecake’s characteristic airiness: Egg whites and yolks are whipped separately, like a chiffon cake, and it’s cooked in a bain-marie, or hot water bath. The rest is pretty standard: There’s cream cheese, butter, sugar, and whipped cream, though Japanese cheesecake is lighter on the sugar than others. 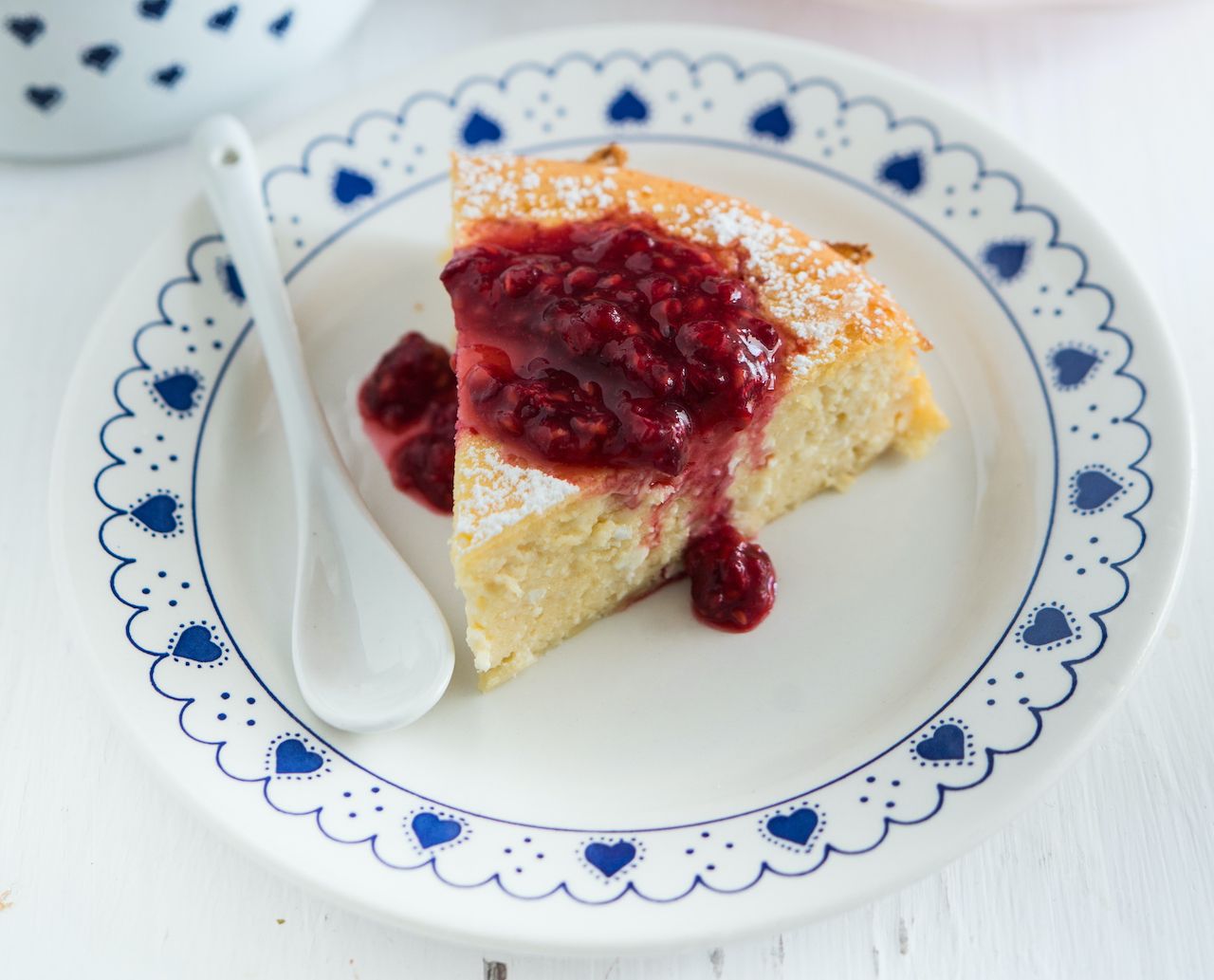 One source traces the written record of ostkaka, meaning “cheese cake” in Swedish, back to the early 16th century, when it supposedly appeared at the bishop of Linköping’s New Year’s Day feast. It’s a traditional dessert in Småland, a southern province located a few hours north of Linköping, and a variation is also common in Hälsingland in central Sweden.

Both recipes call for rennet and milk to create small curds, which can be substituted for cottage cheese in a pinch. Cream, sugar, eggs, almond, and bitter almond round out the batter, which is then baked without a crust, topped with whipped cream and jam, and always served warm. In Småland, copper pots are essential to the baking process. There, it’s customary to eat ostkaka from the middle out, likely as a vestige of avoiding any parts that may have been tainted with copper or tin during the home-baking process.

While most ostkaka are store bought today, the dessert still has a dedicated fanbase. In 2003, a group of them formed the “Friends of Ostkaka” nonprofit and campaigned for an Ostakaka Day, which has been celebrated in Sweden on November 14 since 2004. 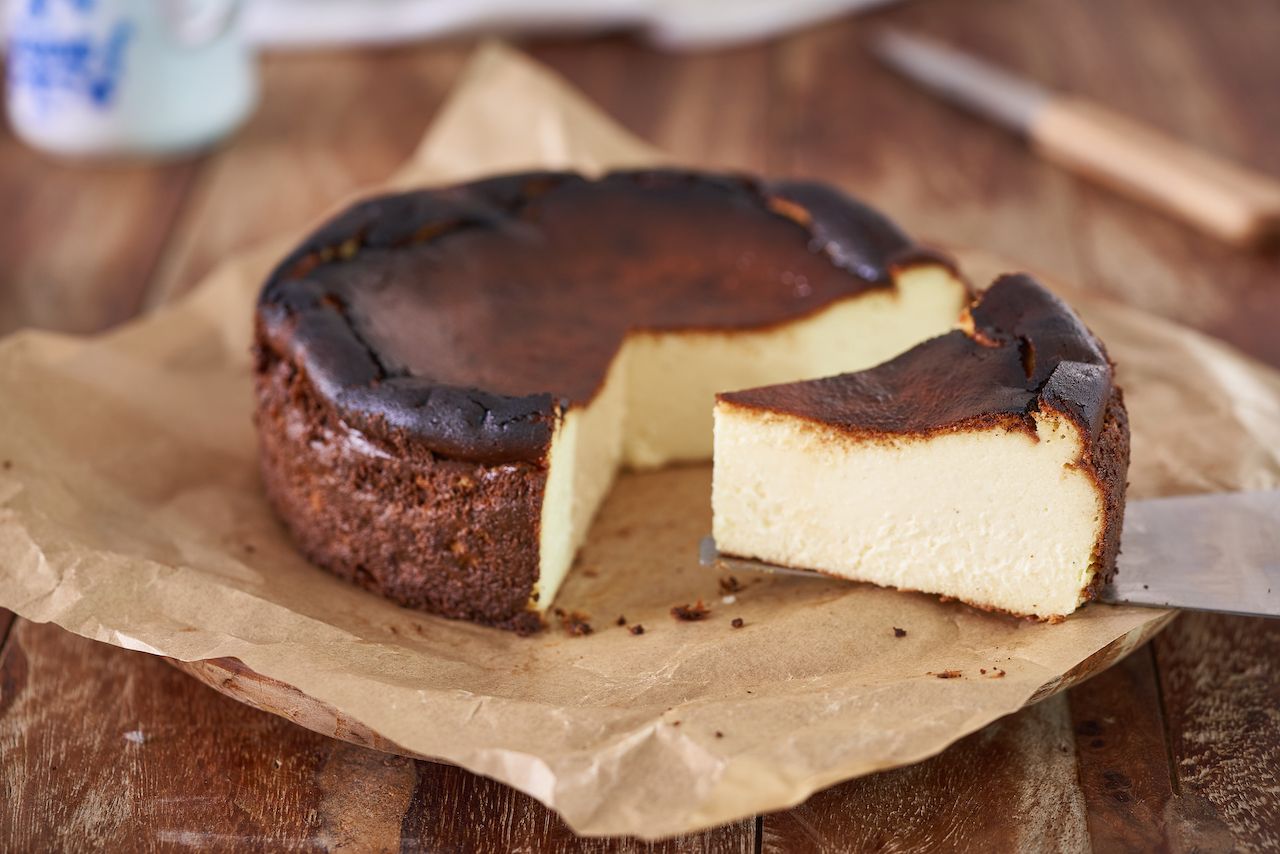 Gazta tarta, a cheesecake from the Basque region of northern Spain, is one dessert that’s supposed to look burnt. Its exact origin is not lost to history like so many other European cheesecakes: Gazta tarta originated in San Sebastian by way of a pintxos bar called La Viña.

Spain’s Basque region is no stranger to custard-based desserts, but this particular cheesecake has been served at La Viña for about three decades. It was invented not long after Philadelphia cream cheese arrived in the region in the 1970s. Outsiders have since caught on, both traveling to San Sebastian to line up for a slice and recreating the recipe in their home kitchens.

The trick to La Viña’s nearly burnt cheesecake, which is now served in restaurants from around Basque Country to Kuala Lumpur in Malaysia, is baking it at a high heat for a short time. This creates a jiggly, molten center and dark, caramelized exterior that adds texture in place of a crust.

Food + Drink9 sweet, savory, and downright delicious pies from around the world
Tagged
Dessert
What did you think of this story?
Meh
Good
Awesome

May 11, 2021 Kellie Mortimer
✖
travelstoke
Download the mobile app
stoked by