On October 23, 2018, the world’s longest sea bridge opened in east Asia, connecting the autonomous cities of Hong Kong and Macao with the adjacent Chinese city of Zhuhai. The aptly titled Hong Kong-Zhuhai-Macao Bridge, or HZM Bridge for short, cut what was before a three-hour trip between Zhuhai and Hong Kong down to about 45 minutes and gave both residents and travelers a quicker and more efficient way to move between the cities. For travelers, the journey is kind of like flying, though not nearly as rigid — just be prepared for multiple trips through customs. Here’s what to know and what to expect.

The HZM Bridge is an engineering masterpiece. 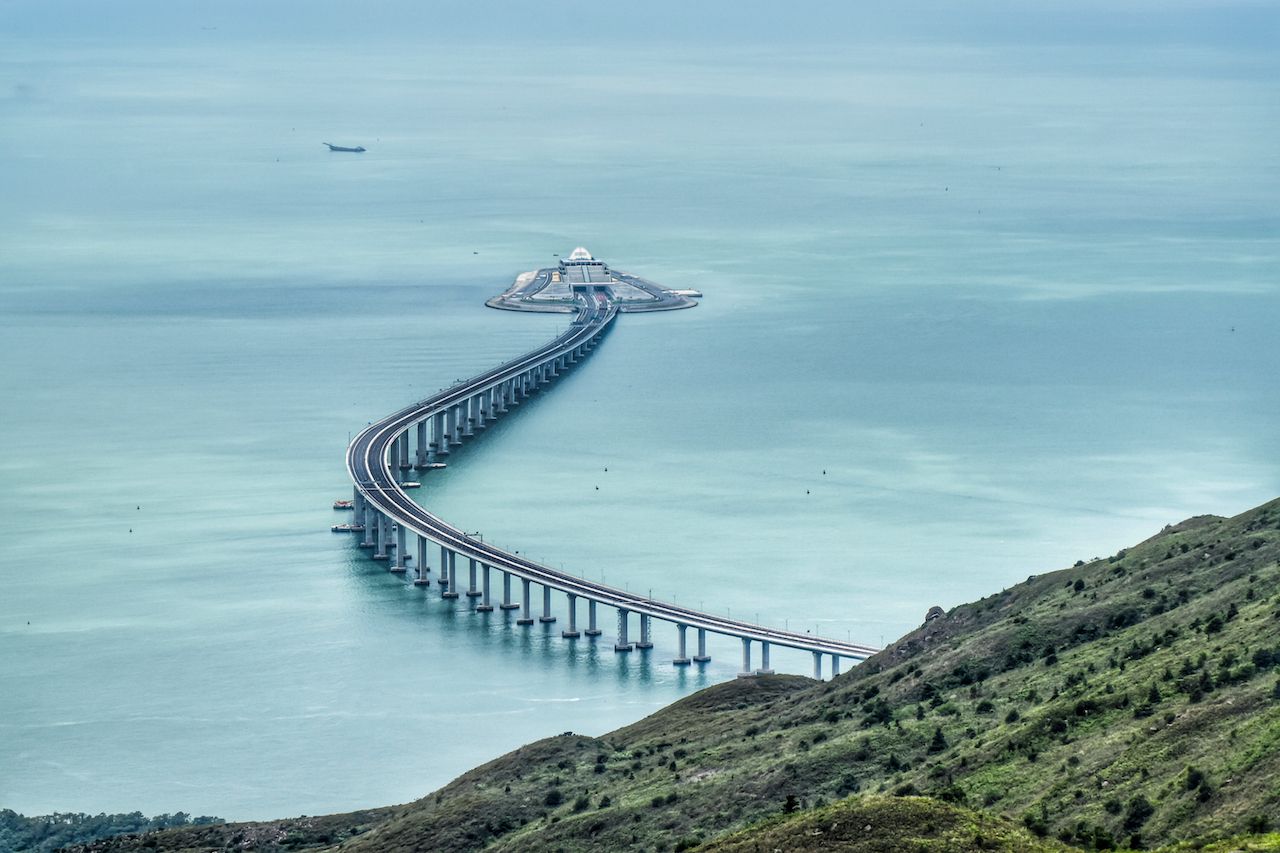 Construction on what was to become the world’s largest sea-highway began in 2009. It took nine years to complete and was designed to be in operation for at least 125 years. Travelers and commuters can now get between the three cities, two of which operate as autonomous city-states, in less than an hour, meaning that if you plan ahead and get your in-and-out Chinese visa in advance, you add some serious credibility to your passport in the span of a single morning. It should be noted that in the sometimes-frustrating tradition of modernization, neither Macao or Hong Kong actually stamp your passport — customs agents at both terminals merely scan the photo page and hand you a printed slip to attach to your passport to document admittance.

Three main parts make up the 34-mile bridge: the main bridge, spanning 18.3 miles; the 7.4-mile Hong Kong Link Road; and the 8.3-mile Zhuhai Link Road. Three cable-stayed bridges make up the primary structure that crosses the South China Sea, but the most impressive part is that the bridge actually travels underneath the sea for over four miles, ducking underwater seemingly out of nowhere out in the middle of the sea. The bridge, terminals, and underwater portion look immaculate now, but the construction process was far from smooth. There were multiple delays and according to the Hong Kong-based Association for the Rights of Industrial Accident Victims, 10 workers died building the bridge and more than 600 were injured.

You can’t just drive across the HZM Bridge. 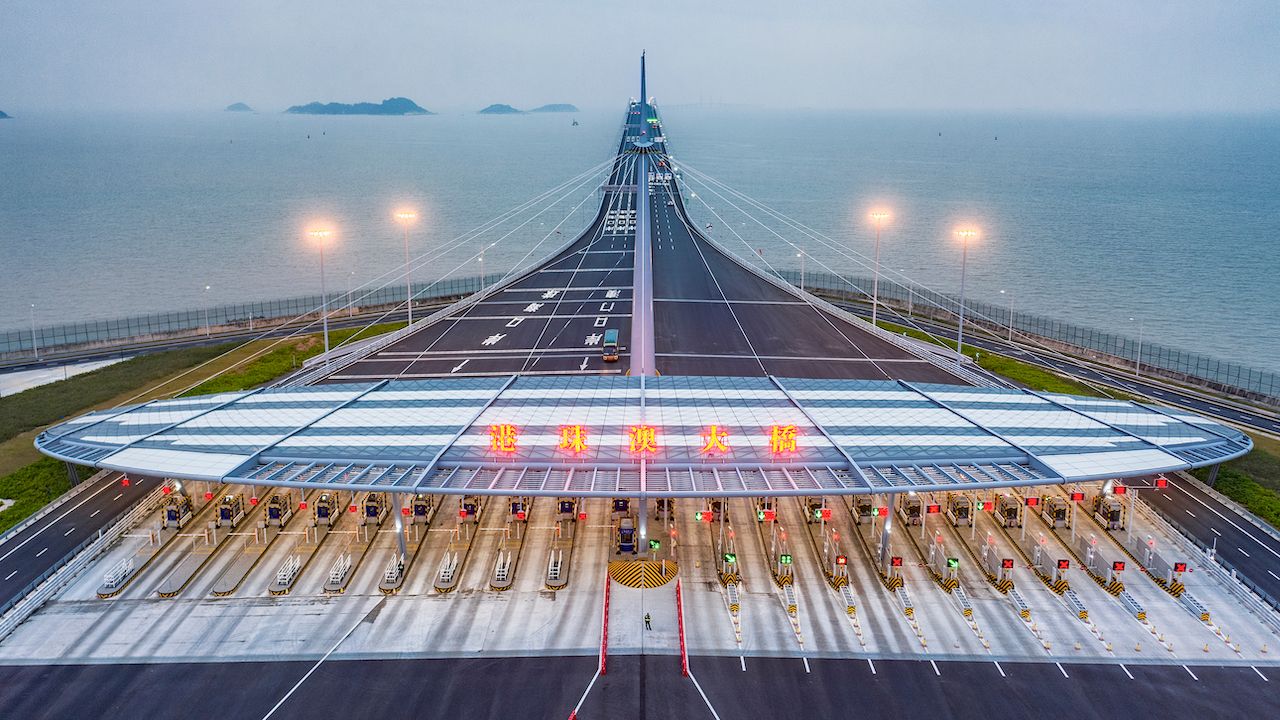 The point that has drawn the most criticism of the new bridge is that you can’t simply hop in your rental car in Hong Kong and drive to Macao for the day. While this would be super convenient, it’s also quite far-fetched. As each city is self-governed, each has its own vehicle registration and licensing process, and patrolling all three at once on the open sea would be a logistical nightmare. There’s also the issue of visas. US, UK, and Canadian residents do not need to obtain a visa in advance to visit Hong Kong or Macao, but unless you’re arriving at one of a specific set of mainland Chinese airports, a visa is required to visit China. This factor also plays out in reverse — Chinese residents need a visa to visit both Hong Kong and Macao in most cases, largely due to issues with those cities becoming overcrowded with Chinese tourists. You can imagine the traffic-driven chaos that might ensue.

So the solution was to shuttle people across in public buses dubbed the Cross Border Coach. Hong Kong, Macao, and Zhuhai each financed and built their own bus terminal to accommodate six-figure daily traffic numbers, and together worked out an impressively efficient process of moving people between the cities. You can also hire a private taxi, should an upscale public bus not be your thing, but the general transport service is easy, fast, and far cheaper. 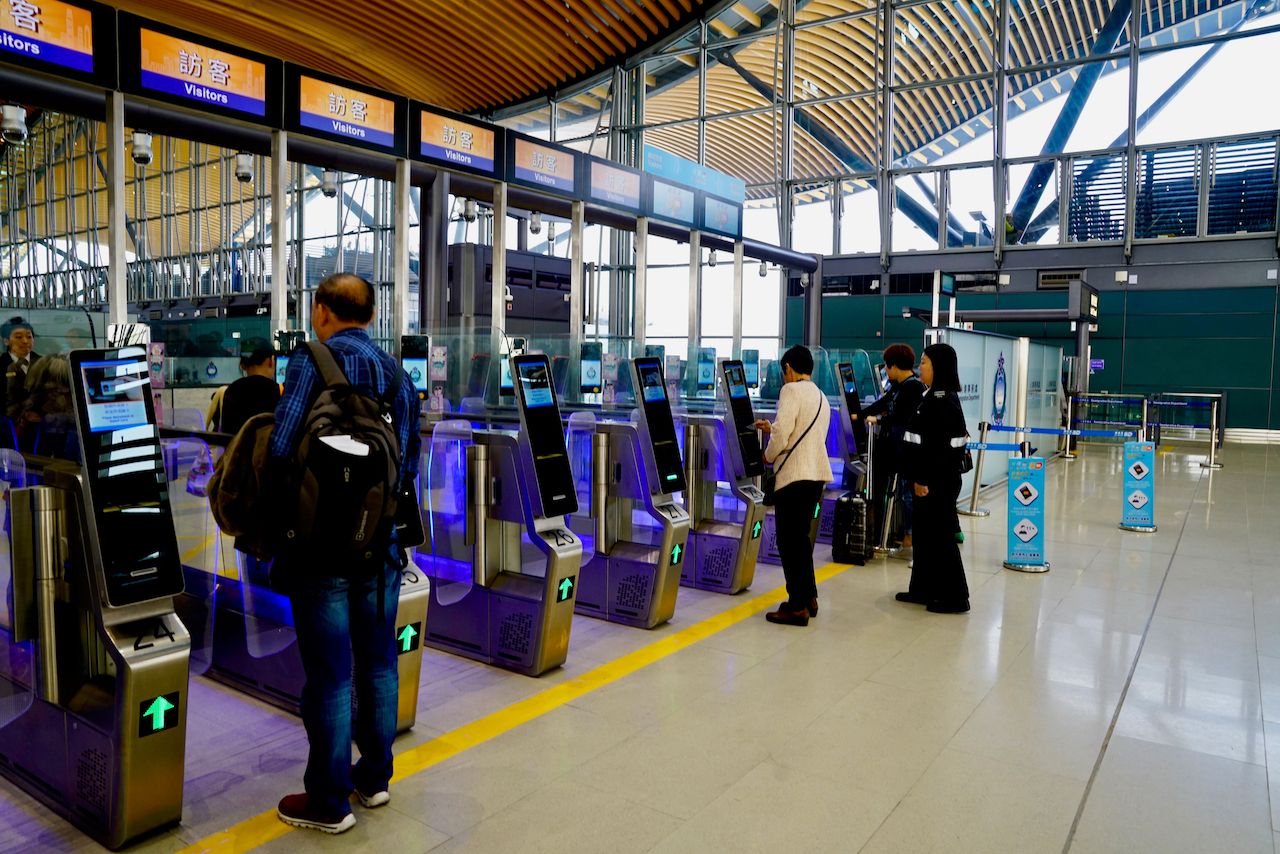 The ticketing and boarding process is similar to what you’d find at a busy bus terminal just about anywhere. Each terminal is laid out like a small airport. You enter, buy a ticket from the ticketing counter, and then proceed to customs. There are two bus lines on the Cross Border Coach service — the Hong Kong Pearl Line, which covers all three terminals, and the Hong Kong Macao Line, which only shuttles between those two cities. Both operate on bright-yellow buses. Commuter bus service is available 24/7 and buses run every five minutes during peak times, switching to every 10 to 15 minutes during slower times. A ticket on either line runs the same — $65 Hong Kong dollars (about $8.30 USD) during the day and HK$70 (about $9) between midnight and 6:00 AM. As long as you’re not embarking on a red-eye journey, expect to pay the lower fare. The agent will sell you the appropriate ticket based on your one-way destination.

Next up is customs. Here they will scan your passport, ask the typical questions about where you’re going and why, and send you on your way through security. The process here is quick — if you have a backpack on, you’ll likely walk right through, but if you have suitcases to check you’ll have to send them through a security checkpoint.

Once through customs and security, you then head outside and enter a queuing area to wait for the next bus. After the ride, you’ll pass through customs on the other side. This process appears quite the ordeal for a 40-minute bus ride, but considering that you’re passing through two, possibly three, autonomously governed areas, it’s actually quite streamlined. Barring a delay, a one-way trip shouldn’t take more than 90 minutes from when you enter one station to when you exit the next. Keep your passport at the ready, if only for convenience. I had mine scanned four times during a round-trip bus ride from Macao to Hong Kong and back.

How to get the best view on your trip 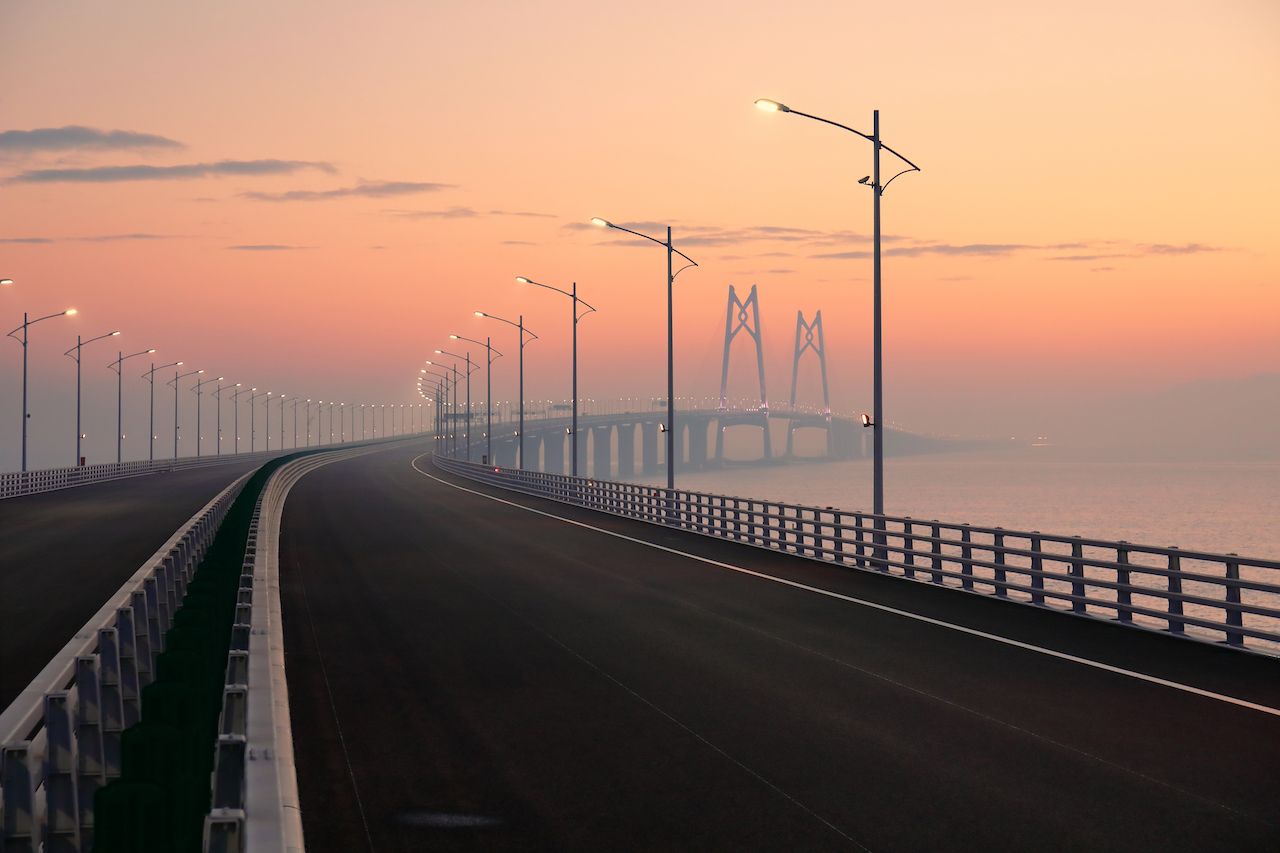 Plan to wait in the queue for anywhere from two to 10 minutes. Once the line has reached the required number to fill a bus, one will pull up, passengers board, and you’re on your way. Should the line be longer than what one bus can hold, another will pull up five minutes later. The buses tend to be packed with both day-trip commuters and tourists heading between the cities. If you’re on the Pearl Line, you might get lucky and be assigned a double-decker bus. I rode the Hong Kong Macao Line both directions and both trips were on a single-layer bus, though each was decked out in the manner of a long-distance coach bus. Comfortable seats, seatback trays, and a small storage pouch. There is a restroom in the rear of the bus.

Try to snag a window seat on the right side of the bus as it appears looking forward through the windshield. This provides the best views no matter which direction you’re heading. Inbound toward Hong Kong you’ll watch the tourist and shipping boats pass by tiny seaside villages, the sprawling islands and hills that surround the city in the background. Heading the other direction, the seemingly endless skyline of Macao and Zhuhai tower over the small, turtle-like hills poking out of the water. The views in both directions are stunning — though unfortunately, the tinted bus windows are a severe impediment to taking quality photos.

WellnessEverything You Need To Know About Smog in Beijing
Tagged
Road Trips Travel Trip Planning China Hong Kong
What did you think of this story?
Meh
Good
Awesome