Horror movies have come a long way over the years, especially with the special effects and computer-generated monsters and gore that the industry uses nowadays. But while the newer horror movies scare aplenty, there’s something about the classics that really sends a chill up our spines. Maybe it’s because they didn’t have the same technology, so they had to seriously put in the effort to make it seem real. With Halloween coming up, there’s no better way to get in the spooky spirit than by visiting the filming locations for some of the most famous horror movies in film history. From a time warp in an old English mansion to a gas station turned BBQ joint, here are 10 horror movie locations that you can visit in real life. But be warned — spoilers ahead.

1. Elm Street house from A Nightmare on Elm Street

It might be a little disheartening to learn that the house from A Nightmare on Elm Street isn’t actually on Elm Street, but finding out that the outside has been kept intact ever since filming should cheer horror aficionados up a bit. In the first movie, it belonged to Nancy Thompson and her family, then Jesse Walsh’s in A Nightmare on Elm Street II: Freddy’s Revenge, and then as Freddy’s dream house in subsequent movies. Visiting here requires the same respect as other locations that are actual people’s home, so be sure to take photos without loitering or damaging any of the property.

Michael Myers is an iconic boogeyman character, right up there with the likes of Freddy Krueger and Jason Voorhees. He first appeared in John Carpenter’s Halloween in 1978, and the movie’s success paved the way for the series to flourish, turning it into an 11-film franchise. One of the more recognizable locations is the Myers house, where the film opens to him murdering his older sister and her brother. While it takes place in the fictional town of Haddonfield, Illinois, the house is actually located in Pasadena, California. The house is private property, home to the Alegria Chiropractic Center, so fans aren’t able to walk the property unless they’re being seen by one of Alegria’s doctors. That said, a pretty good view of the house can be seen from just across the street.

Where: North of 1000 Mission St, South Pasadena, California, on the east side of Meridian Ave

3. Timberline Lodge from The Shining 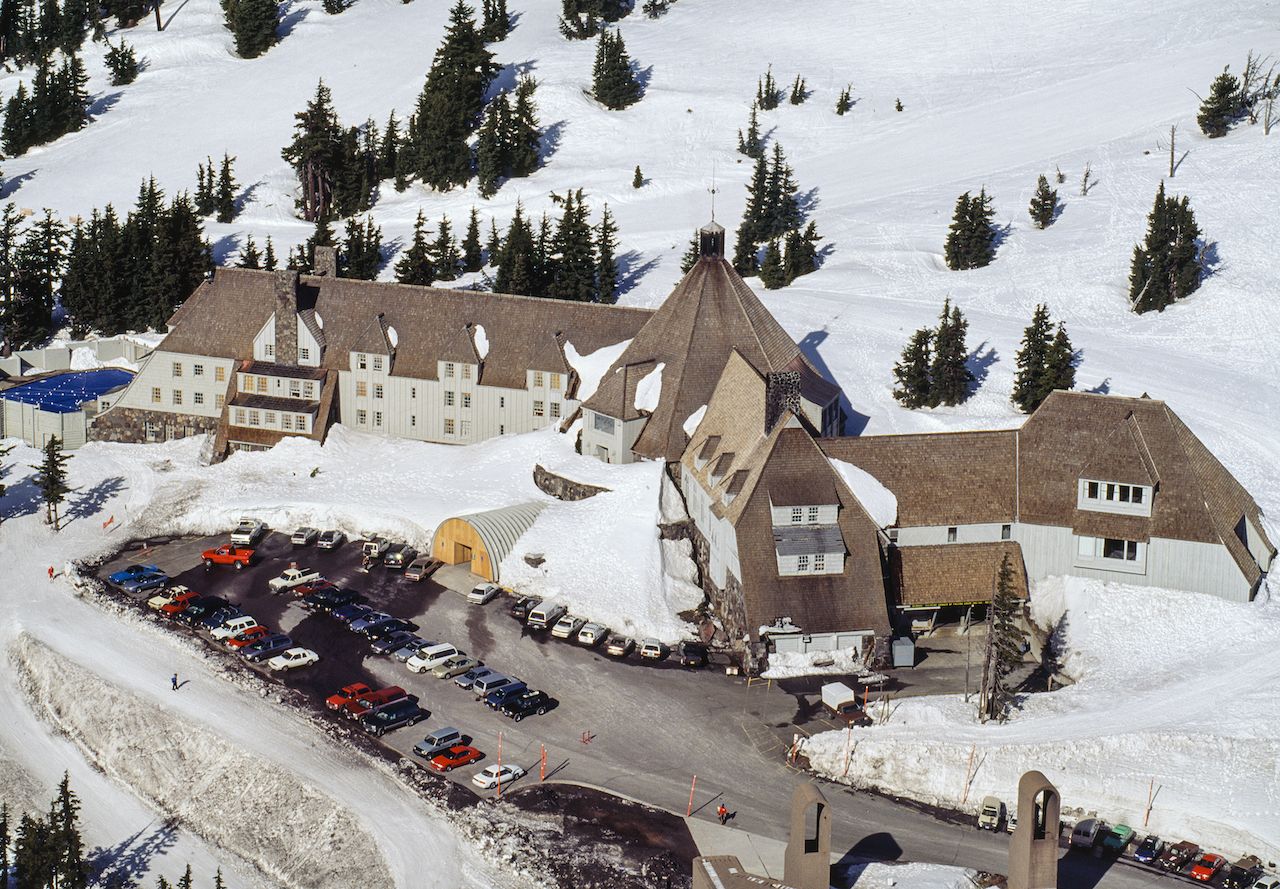 Stephen King is a horror mastermind who published the novel The Shining in 1977. Just three years later, Stanley Kubrick produced and directed its screen adaptation. While it was mostly filmed in a studio, several exterior shots at the Overlook Hotel, where most of the film’s action takes place, were shot at the Timberline Lodge, though King’s inspiration for the Overlook is said to be the Stanley Hotel in Estes Park, Colorado. According to the Timberline, Kubrick was asked not to film scenes of room 217 (the room number used in the book, the movie’s is room 237) so that future visitors wouldn’t be afraid to stay there — but in a maybe not-so-unexpected twist, it’s the most requested room. Staying at the hotel from the Shining also affords visitors access to amazing to snowboarding, skiing, and hiking trails. 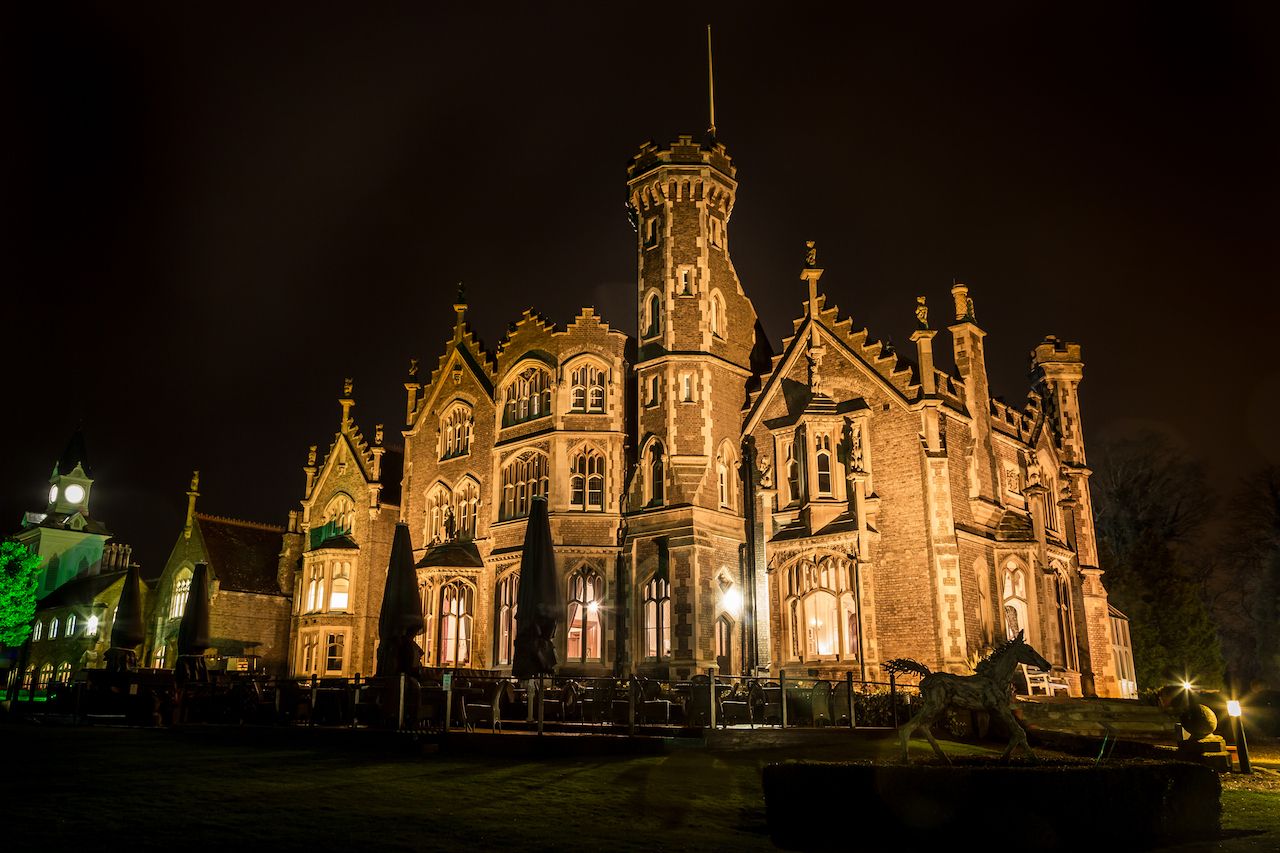 Those who have seen The Rocky Horror Picture Show will never forget it, and those who haven’t can’t stop hearing about it — and for good reason. What began as an unemployed-at-the-time actor’s project to keep busy turned into a stage production and then into the 1975 science-fiction, horror-comedy musical we all know and love. It was shot in England at Bram Studios and on location at the Oakley Court Hotel. Fans may recognize Oakley Court as the mansion of the enigmatic Dr. Frank N. Furter, where central characters Brad and Janet find themselves after their car breaks down in the rain. During filming, it was an empty estate with no working utilities, but it has now been turned into a fully functioning hotel. Many of the original structures from the film remain. There are 118 guest rooms, all designed in typical country-British fashion; a spa; swimming pool; tennis courts; a croquet lawn; a golf course; and boat and bike rentals. You’ll be able to live it up in the English countryside and have an easier time of it than Brad and Janet.

5. The lighthouse from The Fog 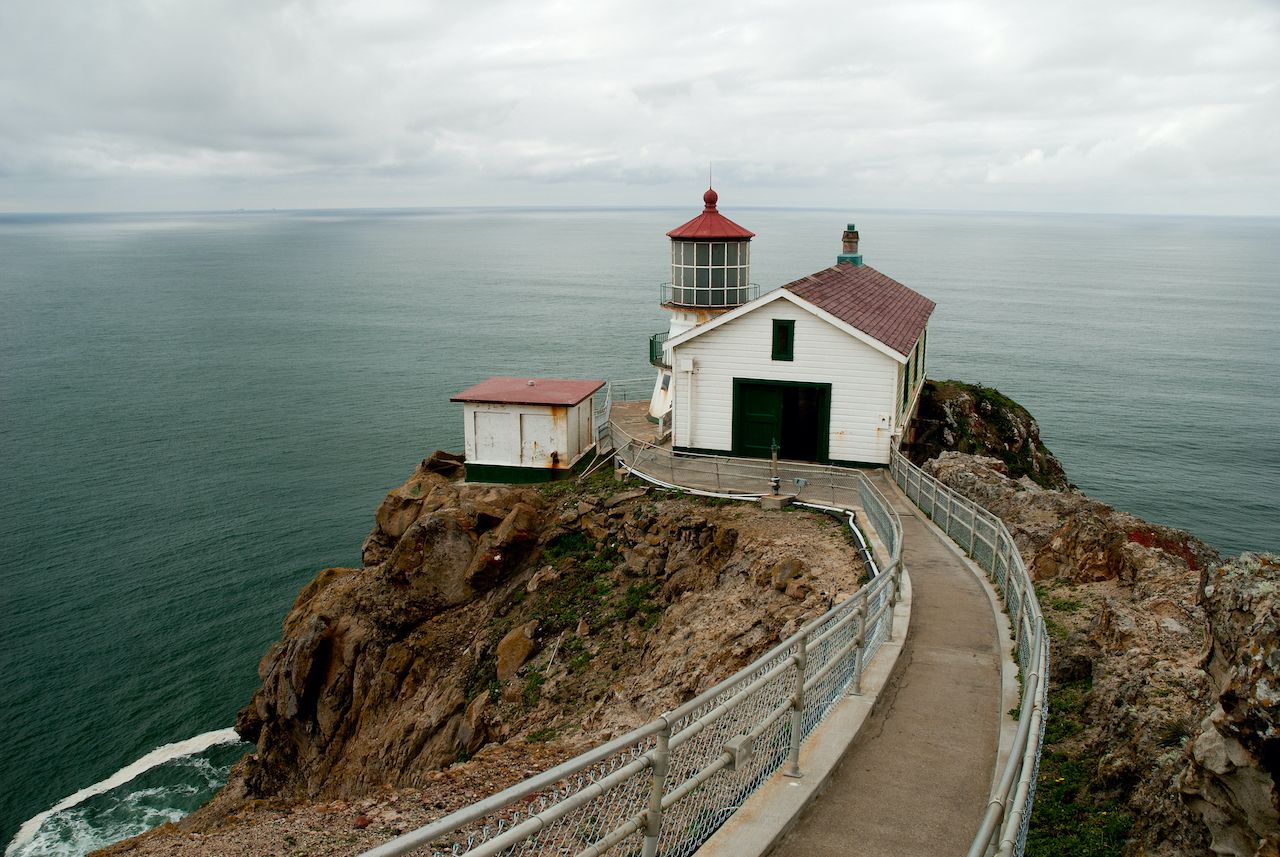 John Carpenter’s second horror movie, The Fog, opened in 1980, just two years after Halloween. In it Stevie, a DJ, goes to a lighthouse to host her radio show after her son shows her a piece of wood that he found on a beach near the lighthouse. Eeriness ensues, and the lighthouse becomes a significant location where Stevie is able to see the fog closing in on the town. The lighthouse is Point Reyes Lighthouse in California, and fans are able to walk right up to the lighthouse and go inside. It’s a steep, 308-step walk down to the lighthouse, and it’ll almost always be covered in fog — making it seem almost as if you were in the movie yourself. 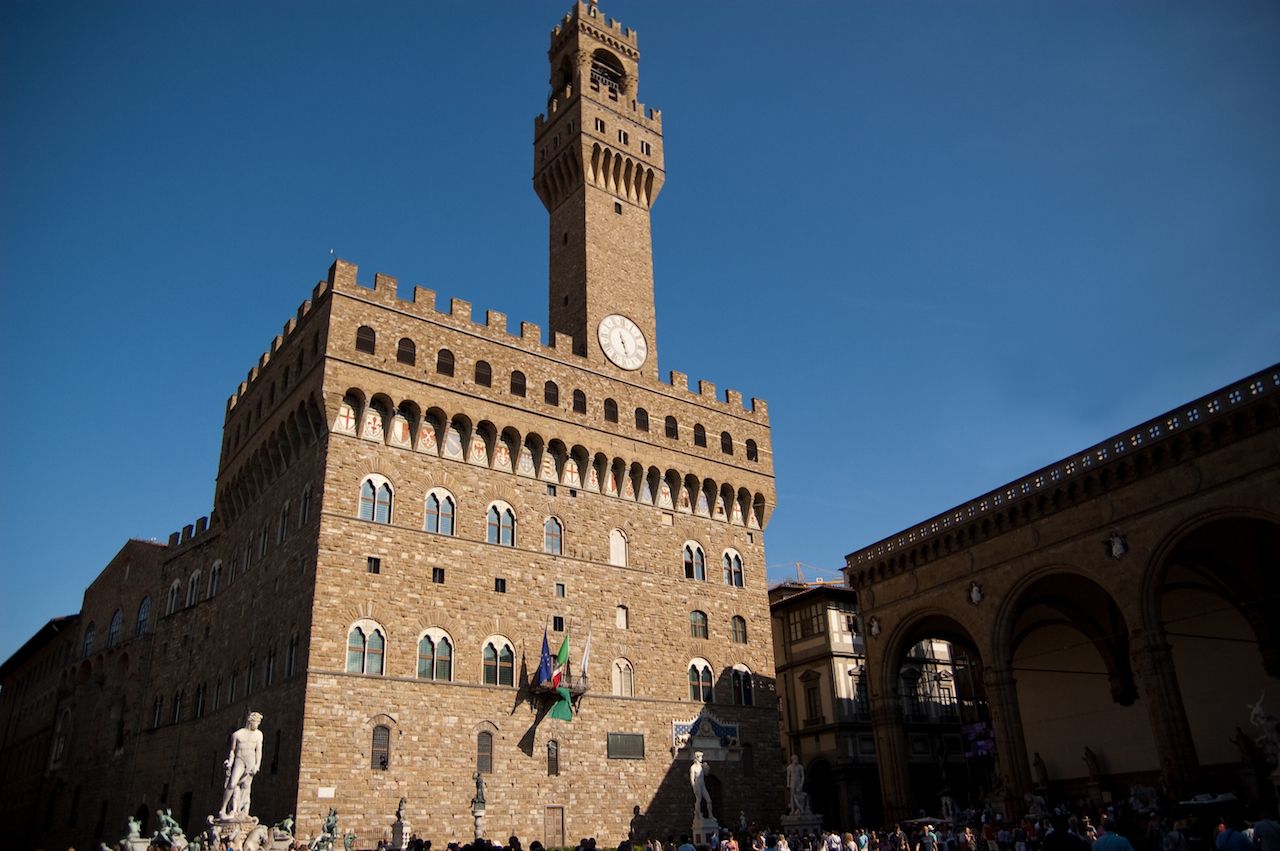 If you’re a fan of the cannibal serial killer’s story and have been looking for a push to visit Italy, look no further. Florence’s Piazza della Signoria is famous for a number of reasons: It’s one of the most highly trafficked plazas in the city and home to the copy of Michelangelo’s David statue, the Loggia dei Lanzi with its wide arches on top of Corinthian-style columns, and the marble Fountain of Neptune. The Romanesque Palazzo Vecchio also finds its home in the plaza and is the city’s town hall. In Ridley Scott’s Hannibal (2001), the fortress is used as the setting for one of the more gruesome murders in the movie.

One of the plotlines in the film is Rinaldo Pazzi, Chief Inspector, investigating the disappearance of a library curator. During his search, he talks to who he thinks is Doctor Fell, the library’s assistant curator, but is actually Hannibal pretending to be Fell. When Pazzi learns of the bounty on Lecter’s capture, he becomes enraptured by greed and tries to capture the killer himself. Lecter baits Pazzi into a room in the Palazzo Vecchio, ties him up, cuts out some of his gastrointestinal organs, then hangs him over a balcony — right next to some of the plaza’s famous statues.

7. The stairs from The Exorcist 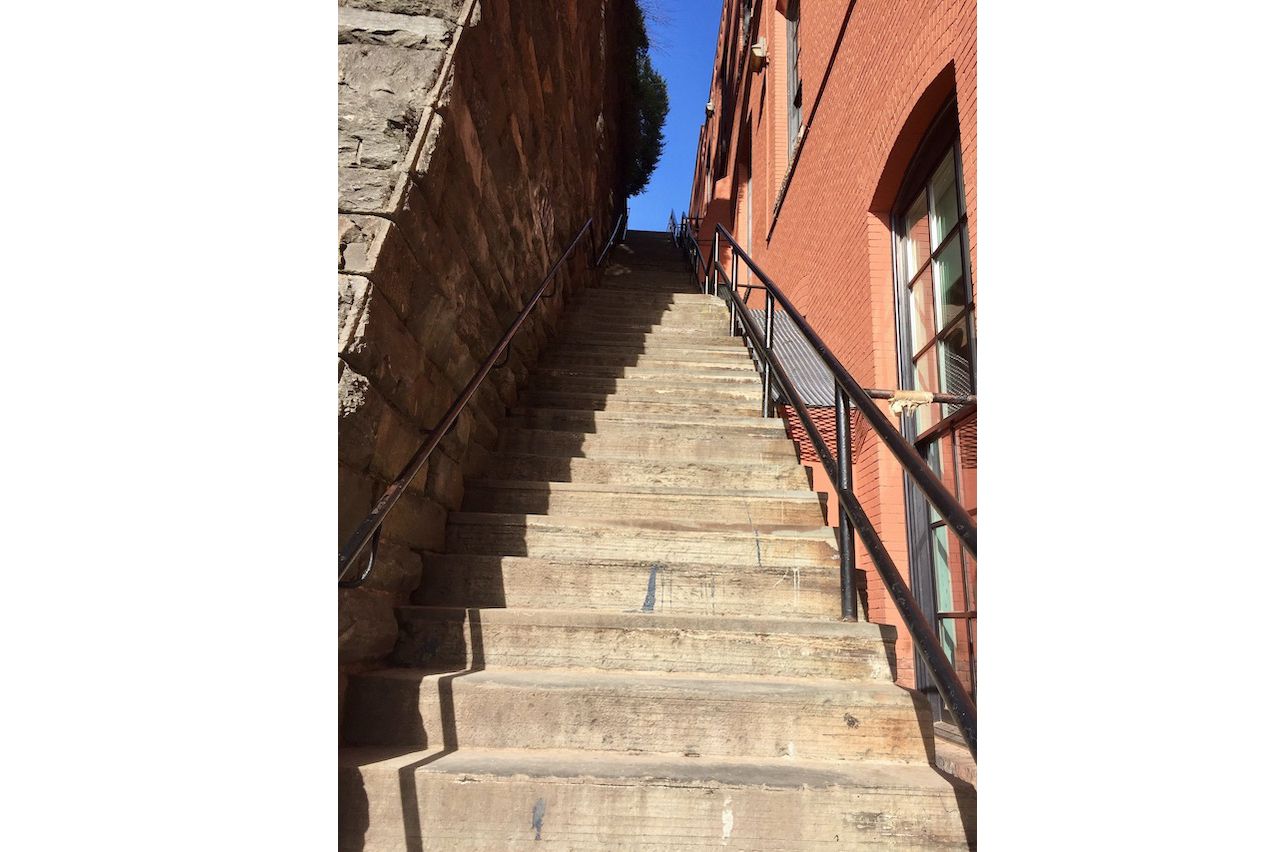 The Exorcist, filmed in 1973, is definitely a movie that’s gone down in cinematic history as one of the best in its genre. In the supernatural horror, a mother is living in Georgetown while working as an actress when her 12-year-old daughter becomes possessed by a demon after playing with a Ouija board. After taking her daughter to a number of doctors, Regan’s mother is recommended to perform an exorcism, and they meet Father Karras. These stairs are where part of the movie’s climax takes place; Karras confronts Regan’s demon and is then possessed by it. He sacrifices himself by jumping out of a window and falling down a myriad of stairs, taking the demon with him.

Where: On the corner of Prospect St NW & 36th St NW in Georgetown, Washington, DC

8. The gas station from The Texas Chainsaw Massacre 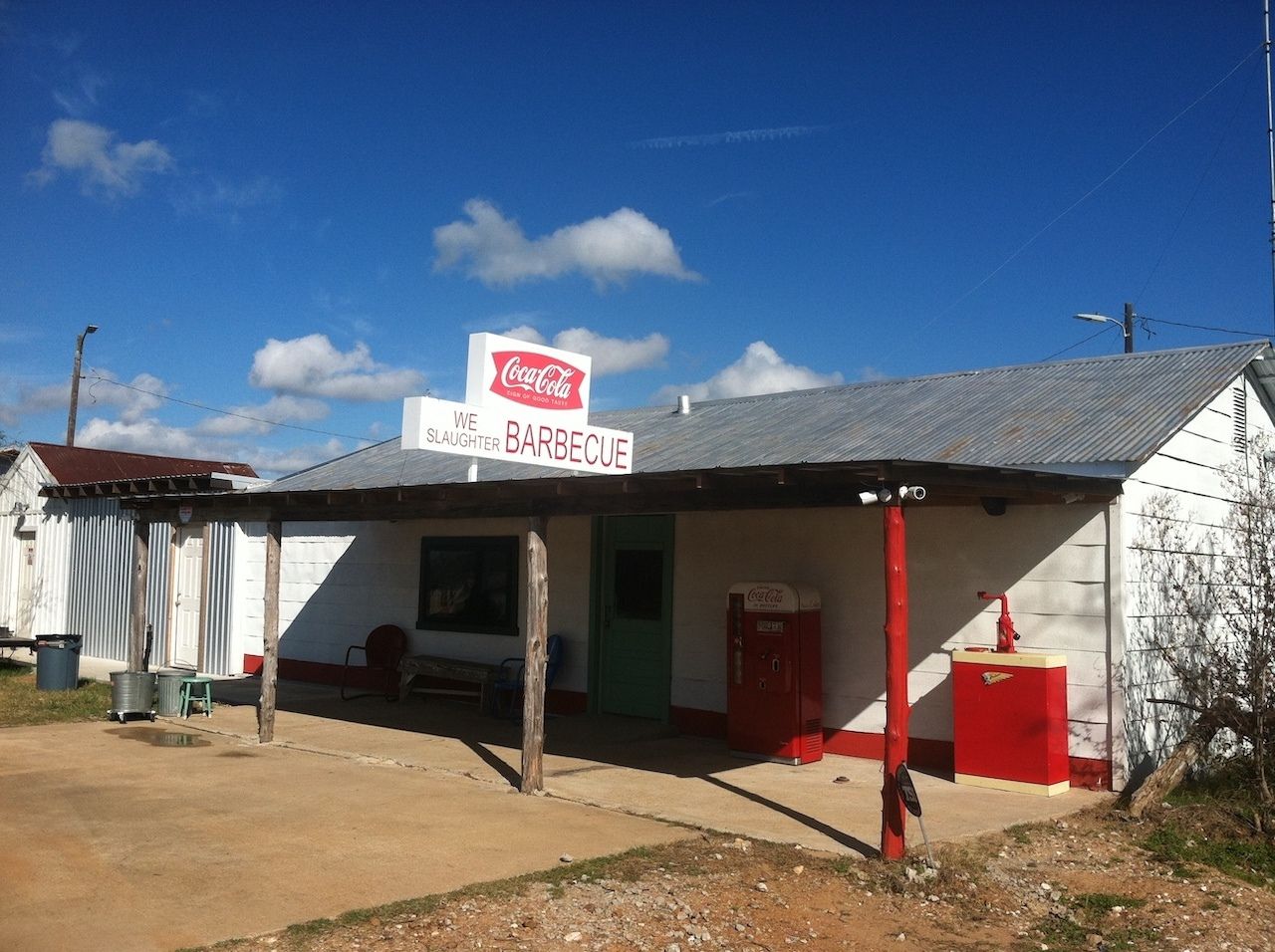 The Texas Chainsaw Massacre saw many people complaining about the sheer amount of violence in the film and was banned from several countries from the get-go. However, it grossed over $30 million, surpassing its limited budget of under $200,000 tremendously. The gas station is one of the more infamous locations, though it initially seemed harmless. The group in the film stopped to get gas only to be told that there was none; they happen upon a house soon after where most of them are killed. One woman, Sally, manages to escape to the gas station, where she then is caught and tormented by the owner. The actual gas station had been abandoned for a while until it was turned into a horror-themed barbecue restaurant full of memorabilia called The Gas Station. And if you really want to have a fright fest, The Gas Station has converted space in the back of the station into cabins that guests can book a stay in. 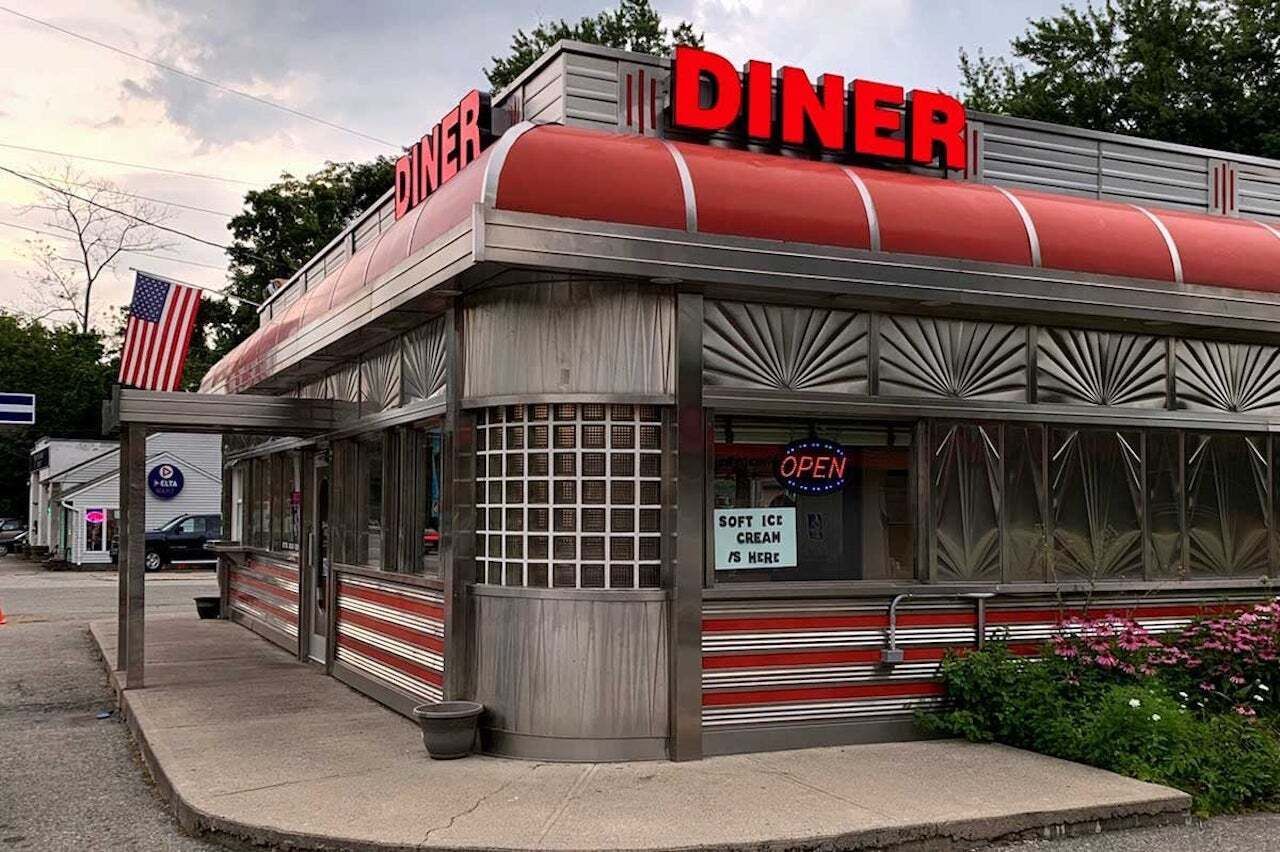 Regardless of whether or not people are horror movie fans, almost everyone has heard of Jason — the main antagonist and serial killer of the Friday the 13th franchise — or seen his iconic mask somewhere. The first movie came out in 1980 and is set in 1958 at newly refurbished Camp Crystal Lake, just a year after a boy drowned in the nearby lake. In the beginning of the movie, one of the camp counselors, Annie, heads into the Crystal Lake Diner to ask for directions to the camp. While Annie didn’t survive long after that, the diner where that scene was filmed still stands today and is open for business in New Jersey. Its real name is the Blairstown Diner, and every Friday the 13th fans flock to it in honor of the movie. 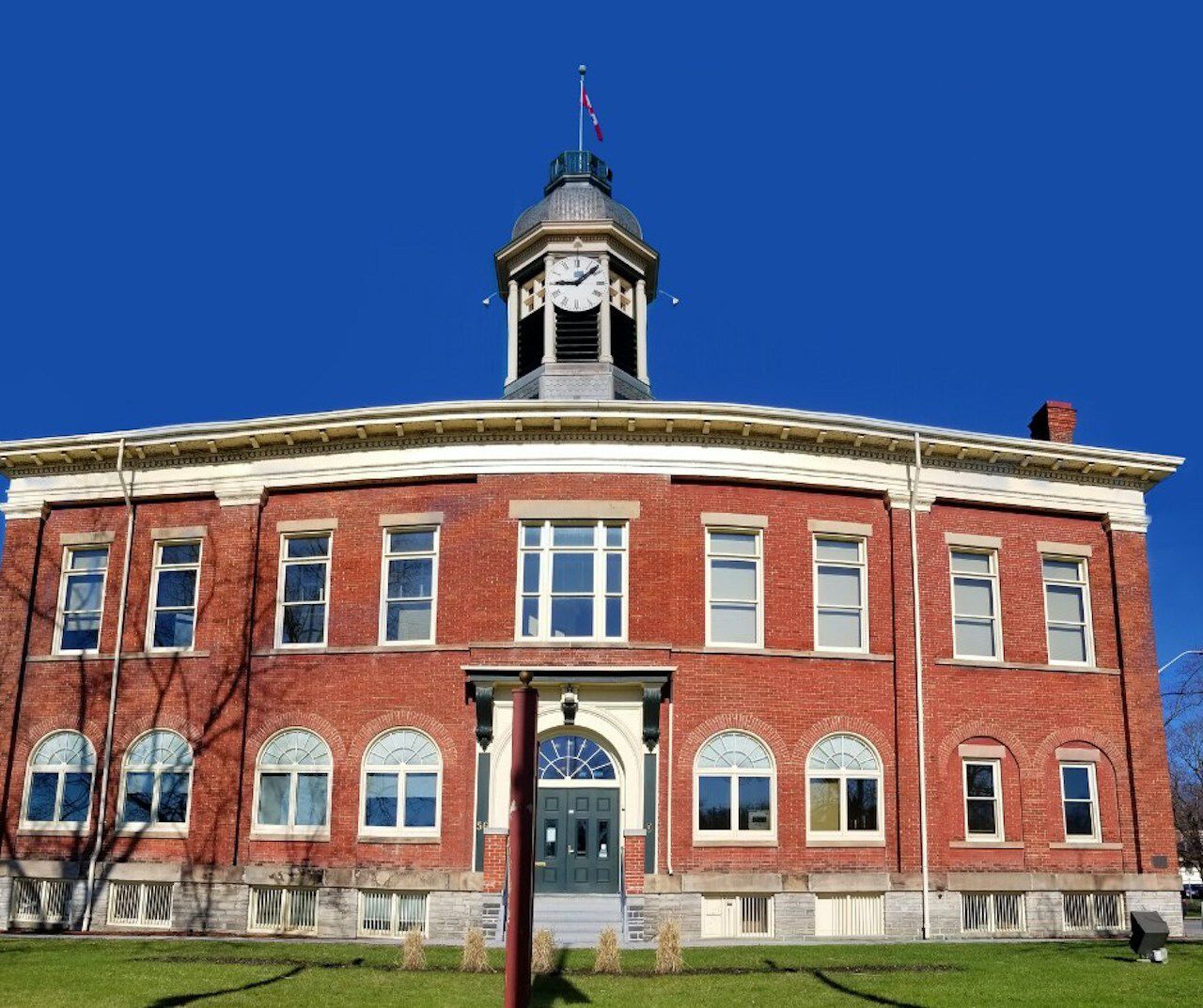 While It and its sequel, It: Chapter Two, take place in the fictional town of Derry, Maine, filming took place around Canada. The town of Port Hope, in particular, was taken over completely for filming and used for several important scenes and locations, as well as various exterior shots of Derry. One of the more significant settings is the Derry Public Library — it’s where young Ben writes a poem for Beverly and discovers the series of unexplained mysteries that have plagued the town, where he’s chased by Pennywise, and where adult Mike lives and shows Bill the origins of Pennywise, just to name a few scenes. While the library’s interior is a mix of shots from other locations, its exterior is that of Port Hope Town Hall. Within walking distance are other locations like Memorial Park, where the Paul Bunyan statue scenes take place; the street where the Losers ride their bikes and end up arguing; and the delivery door where young Mike is haunted by Pennywise.

A version of this article was previously published on October 10, 2018, and was updated on August 20, 2020, with more information.

Entertainment8 Serial Killer Tours for the True-Crime Obsessed
Tagged
Entertainment
What did you think of this story?
Meh
Good
Awesome