When a thick fog rolls in off the ocean, it first swallows up the orange lighthouse overlooking the sleepy fishing village of Stykkishólmur, in Iceland. The fog then moves inland, blanketing the few restaurants and shops within walking distance of the village’s marina. That alone would be reason for visiting the beautiful town, but the location’s port is also a launching point to a remote, serene, and almost totally isolated island destination: Flatey. And once you get there, if you can navigate a series of voyages and rental cars, the first thing you should do – even before greeting the sheep and wandering the pristine coastline – is sit down for a meal at the Hotel Flatey.

I traveled to Stykkishólmur with my partner, who was eager to catch up with an old friend she had lived with while working in Colombia. Stykkishólmur lies on the northern coast of the Snaefellsnes peninsula. The town’s port is full of fishing boats that supply two fantastic restaurants that are within thirty seconds of walking distance from each other. It’s a beautiful and peaceful escape from the frantic way of life found in cities around the globe.

The first thing to know about getting to Stykkishólmur (especially if you plan on eventually traveling to Flatey) is that you must book a rental car in advance. Driving is the simplest way to get from Reykjavik to Stykkisholmur. While there are bus routes between some towns in Iceland, there is no single bus route that will take you around the Golden Circle, Iceland’s interconnected road that runs close to the perimeter of the country. If you do procure a car in advance, the drive from Reykjavik to Stykkisholmur will take you between 120 and 150 minutes.

On our voyage to Iceland, we greatly underestimated the demand for rental cars, and we arrived to find “Sold Out” signs at every rental company desk. Our only option was to get to Stykkishólmur by bus. In Iceland, it’s important to plan your bus trips in advance. Times can change weekly, and certain buses only run on specified days. Travelers should download the free Strætó BS app for buses in and around Reykjavik. We didn’t plan well enough though, and ended up with our thumbs out on the side of the road. We were picked up by a solo traveler from the Netherlands, who brought us all the way into Stykkishólmur.

Once you get to Stykkishólmur, the ferry ride to Flatey takes ninety minutes. Ticket prices vary by month and they increase according to peak months of tourism. Off season tickets run as low as $23 USD for a one-way ticket, but summer months will run up to $75 USD for a one-way ticket. There is a ticketbooth and storefront operated by Seatours on the pier in Stykkishólmur where you can purchase your spot on the ferry.

Even in the summer months, the ride on the top deck of the ferry is frigid. The wind whips against your skin and paints your cheeks red. It’s best to bundle in layers that can be easily stripped off for a later walk around Flatey. Though cold, the views are well worth braving the low temperatures.

Flatey is part of a group of islands created by the pressure of a glacier in an area known as Breiðafjörður. As we cruised along on the ferry, several miniature islands floated by, some with only a single dwelling peering off of the top of a rock protruding out of the water. The images conjured up stories in our minds about the people who might be living in these homes. When our fingers finally went numb, we escaped down into the lower deck to purchase cups of coffee that would thaw us out. 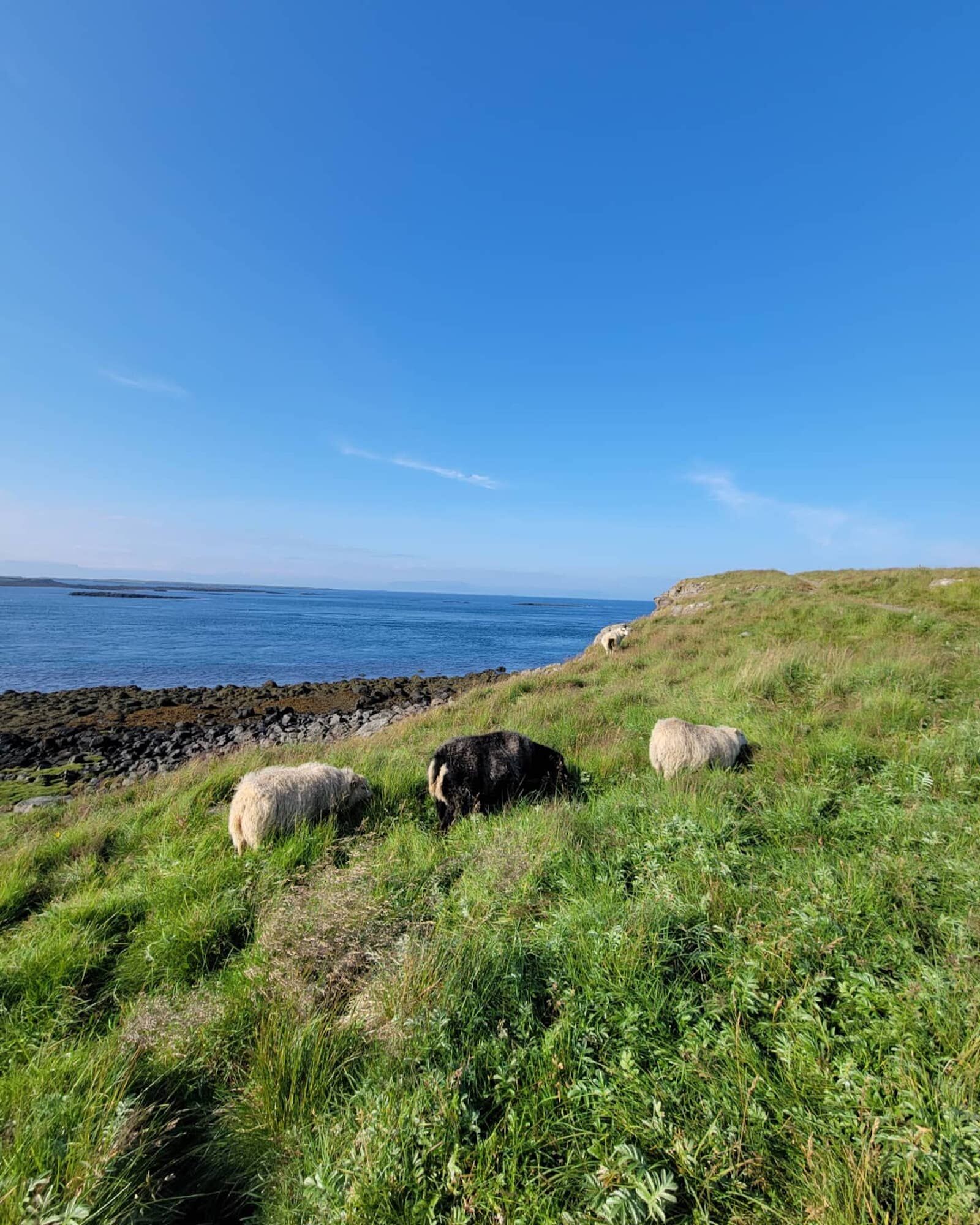 There is a single road leading from the port at Flatey into the village. You’re likely to only see one car on the island, and it runs supplies back and forth between the ferry and Hotel Flatey. We took a circuitous route from the port, walking along the cliff’s edge, through long grass that hid black and white sheep. A shaggy dog skipped alongside, rousing the sleeping sheep who once awakened, watched us warily. 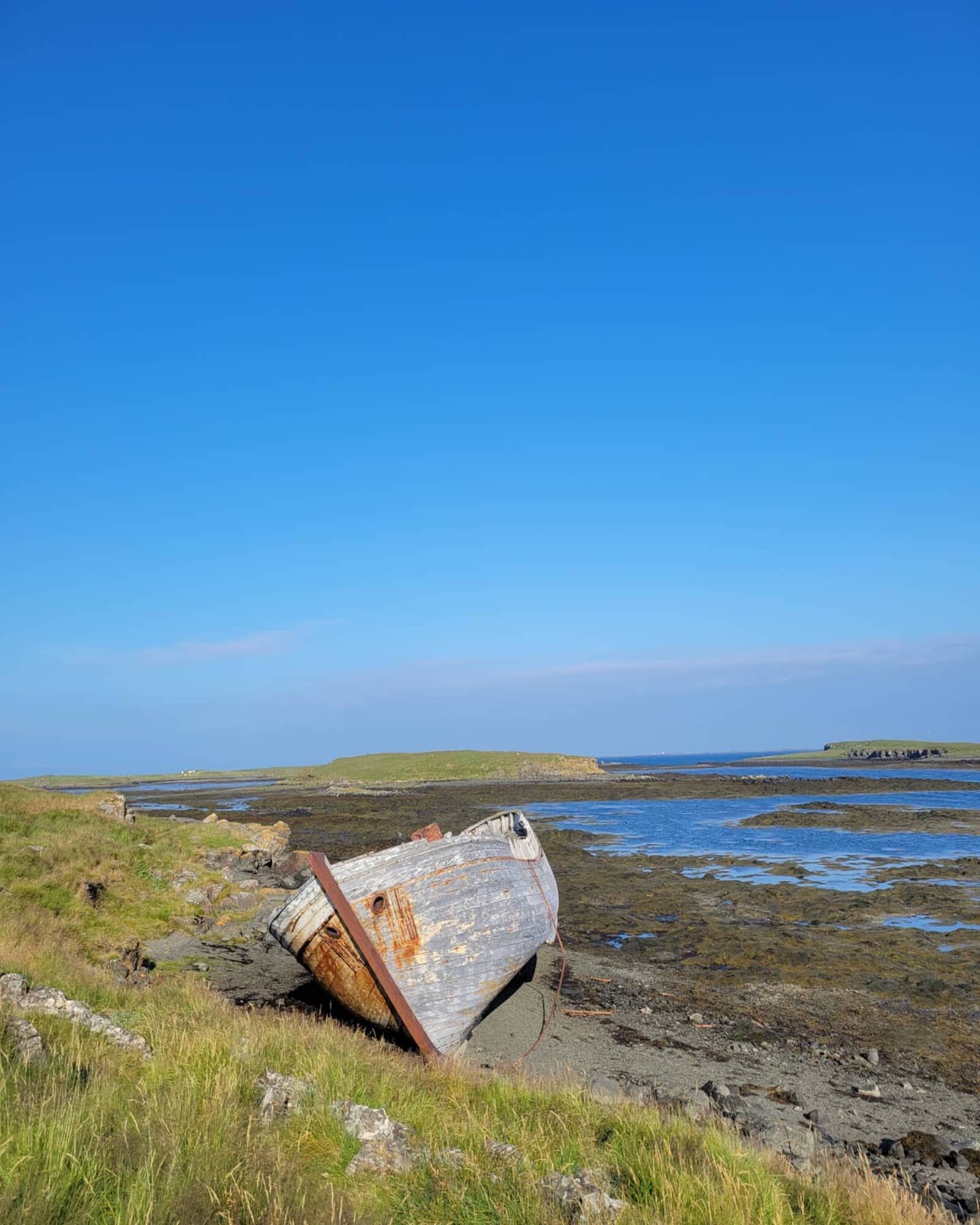 Like much of Iceland, Flatey features colorful homes that look as if they were plucked right out of a storybook. An old hollowed out ship, long ago wrecked on the rocks, serves as a landmark on one side of the island. The other side features large rock formations reaching out of the ocean, and they are covered with squawking birds calling for their mates. A single-room library uses the honor system, with bibliophiles recording their name and the book they borrowed in a ledger that sits upon a wooden table. The hotel and restaurant are open during the summer months. In the winter, only two families remain on the island.

In Flatey, you can stand on the edge of a cliff, look out, and see only the ocean stretching for miles until the frozen, deep blue water runs into the horizon. There is but one place to find solace in the form of warm food and drink, and it’s the restaurant attached to Hotel Flatey.

The restaurant was first built in 1890, but was renovated in 2007. It is located in the Samkomuhús (assembly hall) building attached to Hotel Flatey. Tables can be booked in advance. At the time of our visit we weren’t aware of this fact, and we arrived before the kitchen opened for dinner at 6:00 pm. Fortunately, you can still purchase tea, coffee, and baked treats between the end of lunch at 3:00 pm, and when the kitchen fires up its burners for dinner. We happily sipped at steaming cups of rich, deeply flavored coffee and put our names down for a table. Looking out the window, we saw free-roaming sheep who ran bleating down a dirt path, chased by children pushing their friends in a wheelbarrow. 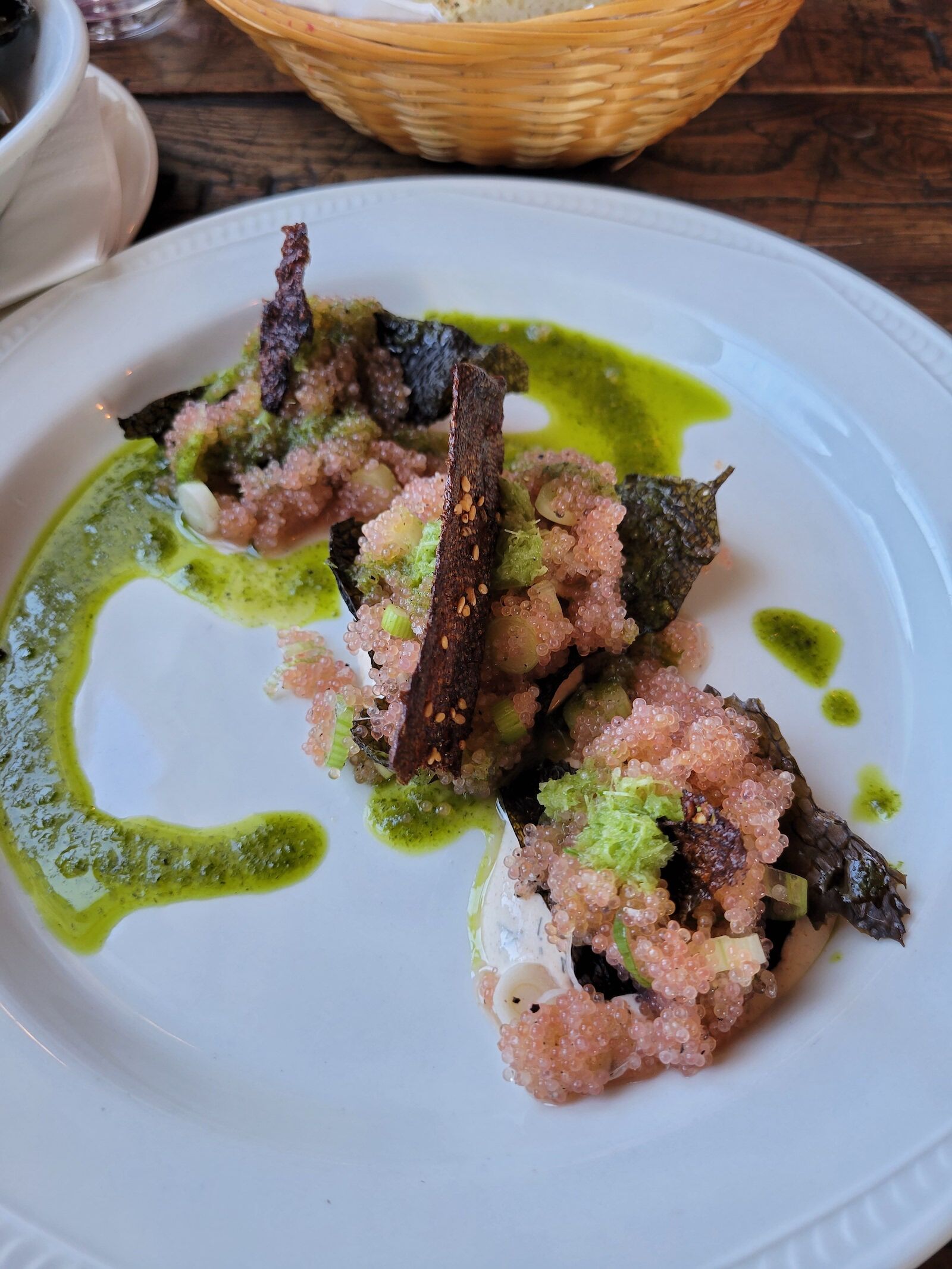 The food reflected the best of what Iceland has to offer. Local, Icelandic delicacy, svið, features a cross section of sheepshead. Mussels pulled straight from the ocean were sauteed in butter and herbs. Thick, crusty bread was provided for soaking up the savory broth at the bottom of the bowl of muscles. Heaping spoonfuls of pink roe drizzled over crispy seaweed sent out brains into an endorphin-filled frenzy. A stocked bar with stomach-warming spirits kept us toasty for the ride back. It’s likely that we would have been happy having been served frozen television dinners at Hotel Flatey, due to the restaurant’s idyllic location. But the delicious offerings made the experience all that more worth the trip.

Friðgeir Helgason is the chef responsible for the magical dishes. The experience was made possible due to the combination of his skill and creativity. I watched Chef Helgason through the open archway of the kitchen, with his head wrapped in a bandana, as he melted pads of butter and sauteed freshly gathered mussels. Despite being the one person cooking, he made time to walk amongst the happy eaters in the dining hall to check on the success of his creations. Fortunately for travelers in 2022, he will be returning to the kitchen once more this summer.

Fully sated, we walked out into the fading light of early evening. Our return ticket was booked for the final boat returning to the mainland, so we hustled down the path after our meal, bidding farewell to the sheep and smiling children, hopeful that we would return again.