Starting tomorrow (Thursday, September 13th), Hurricane Florence is expected to bring as many as 40 inches of rain and over 150 inches of floodwater to North and South Carolina, leading to what many experts say could be widespread flooding that topples buildings and downs power lines and other structures. The life-threatening storm shifted slightly southwest on Tuesday, potentially increasing the total area of impact. You can follow the path of the storm here. 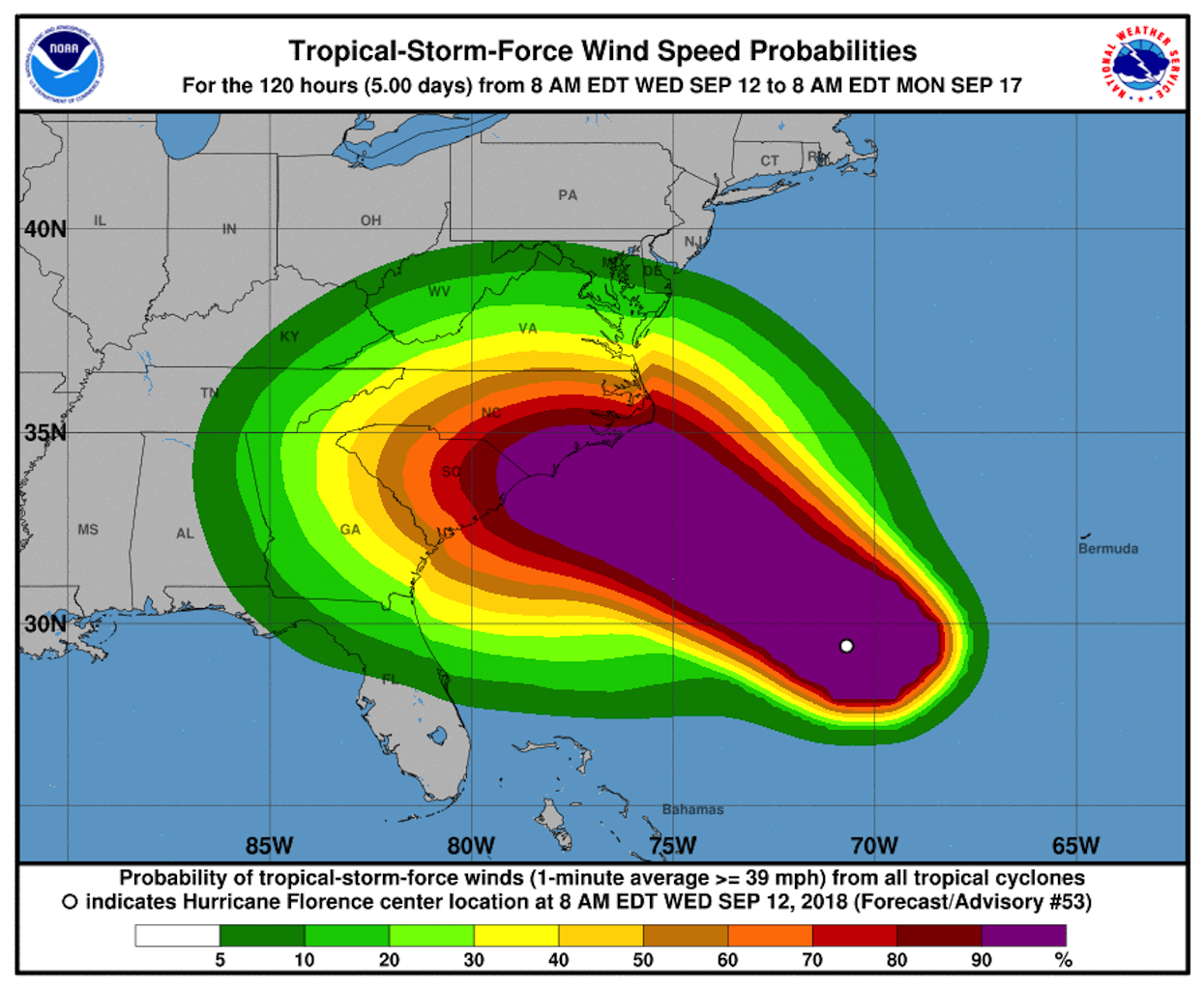 For residents of the Carolinas and Mid-Atlantic states, the chaos has already begun. More than one million South Carolina residents are already under evacuation orders, and that number is expected to rise. The National Weather Service branch located in Wilmington, North Carolina, released a statement Tuesday warning residents in the area of a potential “storm of a lifetime.” A report posted by the National Hurricane Center stated that the “combination of a dangerous storm surge and the tide will cause normally dry areas near the coast to be flooded by rising waters moving inland from the shoreline.” As of Wednesday morning, Florence was still listed as a category four hurricane with hurricane-force winds, barreling towards the coastal United States.

#1 reason why #HurricaneFlorence is so dangerous to the coast. #StormSurge This is what a 12ft. surge could bring to anyone who doesn't evacuate. More on how high the surge could be @nbcbayarea 11 #MyrtleBeach #Wilmington #TopSail #Hatteras pic.twitter.com/gyZsnlxsho

While winds are expected to die down slightly prior to landfall on Thursday, the expected levels of seawater are causing panic along the coast. The NHC encourages residents to take all safety precautions to protect both lives and property and to heed evacuation orders today.

Travel on the southeastern coast is expected to be under heavy delay in the coming days. Most major airlines — including Delta, American, United, Southwest, and JetBlue — are offering waivers or waving rebooking fees for travelers impacted by canceled or delayed flights, with United offering up to one year to rebook. In addition, The New York Times reported that Amtrak has canceled many routes heading south from Washington, DC.

What Travelers Need To Know About Hurricane Season
Tagged
News
What did you think of this story?
Meh
Good
Awesome